10 things you need to know about the Ferrari SF90 Stradale 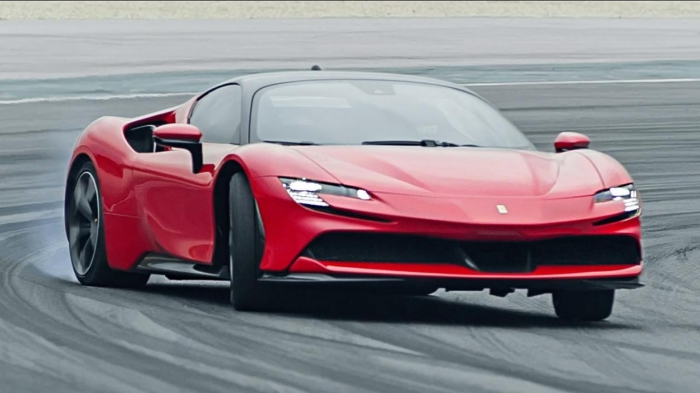 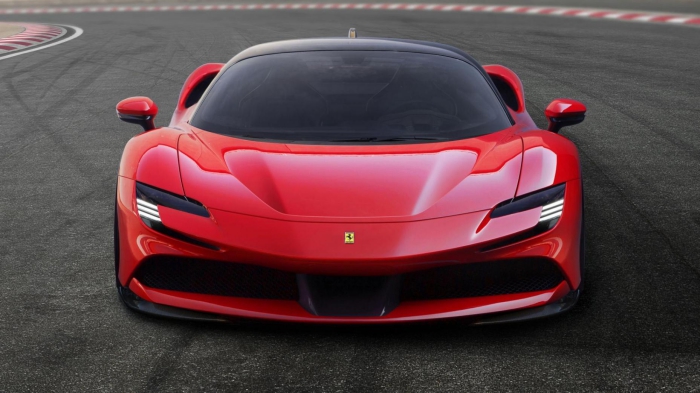 The big news is that this is Ferrari’s first PHEV (plug-in hybrid vehicle) developing 1000hp. Doing the heavy lifting in the power stakes is a heavily revised version of Ferrari’s twin-turbo V8, which delivers 780hp. Adding further grunt are three e-motors delivering a combined 220hp.

The first is an F1-derived MGUK (Motor Generator Unit Kinetic) located between the engine and gearbox, while a further two motors work on the front axle. So it’s not just Ferrari’s first PHEV, but also its first AWD two-seat sportscar.

This powertrain has given the team at Maranello a chance to deploy torque vectoring and all-wheel drive performance for more speed through the all-new and handily acronym friendly RAC-E (Rotational Axis Control Electric) which, judging by the results, takes the pursuit of speed to another level. 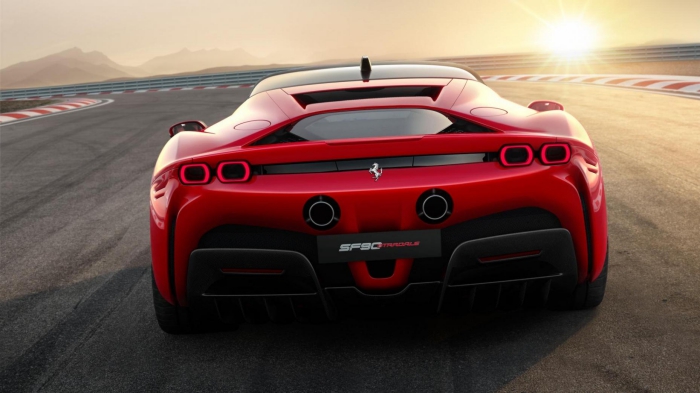 2) The aero is quite special

Some very clever aero has been designed to create enough downforce to keep the most powerful Ferrari production car in history bolted to the planet. The headline is that the SF90 Stradale produces 390kg of downforce at 250km/h. To deliver that, the front of the SF90 features Vortex generators, a wing-section front bumper and two diffusers ahead of the front wheels to generate front-end downforce.

At the rear, the back edge of the engine cover features a suspended wing divided into two sections, the forward section of which can lower, acting as a gurney flap to increase downforce as required, or remain level to increase airflow and minimise drag. This is controlled by two actuators, with huge processing power to constantly adjust the'shut-off gurney’ to maximum effect.

3) It's the fastest series production Ferrari of all time

It seems the SF90 is set to redefine our understanding of rapid, being the fastest series production Ferrari of all time. Thanks to AWD and hybrid tech, the SF90 will propel its lucky occupants from 0-100km/h in 2.5secs and 0-200km/h in 6.7. It tops out at 340km/h.

But that’s merely the straight-line bragging rights, and modern Ferraris have always been about so much more than straight-line stats. To illustrate the performance of this'regular’ series production car you need to compare it to the most recent Limited Series hypercar, LaFerrari. Around Fiorano, the SF90 Stradale will gap the LaFerrari by 64 metres a lap, such is the ceaseless march of technological progress. 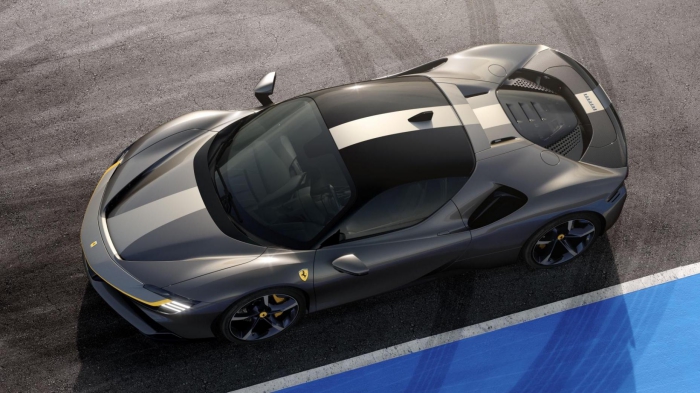 4) It celebrates 90 years of Scuderia Ferrari

SF90 is code for the 90th anniversary of Scuderia Ferrari’s formation and talks to the involvement the Scuderia had in the car’s creation, not least in the area of the MGUK - the e-motor mounted between the engine and the new eight-speed'box. Stradale directly translates as road… the SF, while being brutally effective around Fiorano, is most definitely aimed at the road. 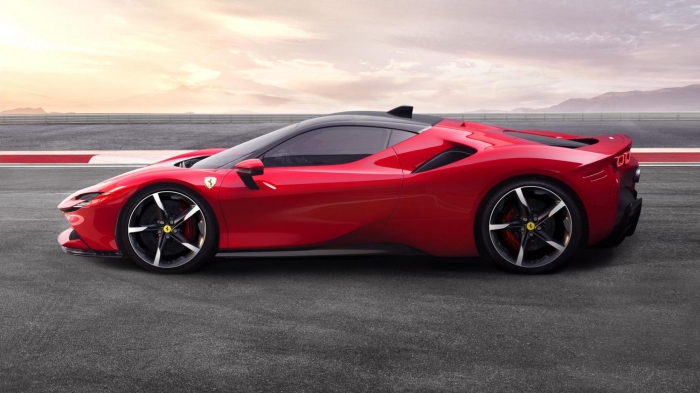 5) The door handles aren't an afterthought

The more observant of you will have noticed the lack of doorhandles on the side profile image of the car. This is good news given that the ones on both the 488 and F8 have always looked and felt like afterthoughts and required cunning post rationalisation from the Maranello PR department about them being beneficial for aero.

For the SF90, Ferrari has tackled this tricky issue from the outset. It features an all-new key which allows for keyless entry and exit (car thieves are heard to be delighted at the news) and was described by Ferrari CMO Enrico Galliera as 'a far more elegant solution'.

The handles themselves are cleverly mounted on the upper surface of the door so as to minimise both the visual impact and aero disturbance. All you need do is approach the car with the key in your pocket, push your fingers through the panel, flick the pressure pad and you’re in. 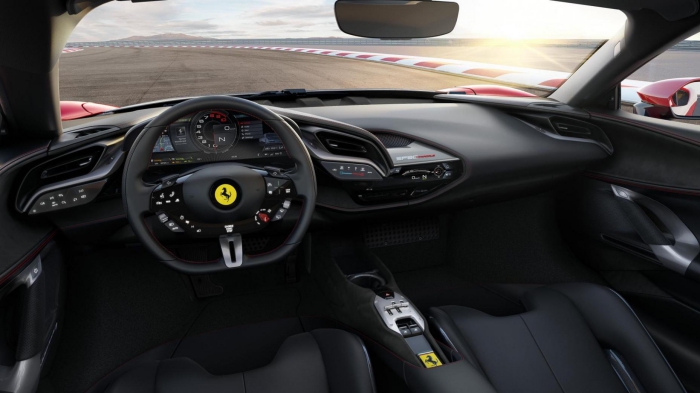 Ferrari made a big play of the Human Machine Interface, something that anyone who has struggled to navigate the previous baffling system will be delighted by. The steering wheel continues to feature myriad buttons and, all bar the eManettino, are touch-sensitive rather than mechanical, and feature haptic feedback.

The starter button is now based at the bottom of the steering wheel, but we remain to be convinced that a haptic, flat button is the most engaging way to fire up your Ferrari.

Beyond the wheel sits an all new full 16in curved TFT screen, configurable in many different ways. The slight curve helps to aid visibility and, having played with this new set-up, we can say it sets Ferrari a class apart from the opposition.

The SF90 Stradale also features a head-up display showing key information depending on what driving mode you’re in. Given the car’s performance, Ferrari is keen to do all it can to keep the drivers’ 'hands on the wheel, eyes on the road'… which seems wise. 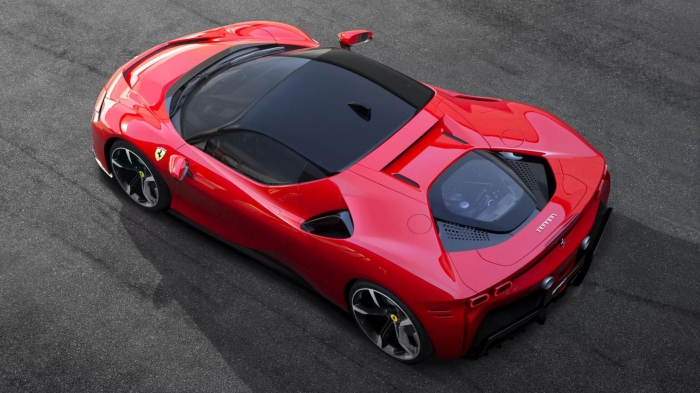 Thanks to its PHEV tech, the SF90 won’t irritate the neighbours when you leave early in the morning to get to work and earn the finance repayments. The new eManettino features four new settings.

First is an eDrive mode that allows you to silently slip out of the garage on pure EV power and cover 25km stealthily before having to flick to Hybrid mode, where the twin-turbo V8 kicks in. Flick the eManettino past Hybrid and into Performance and, unlike Hybrid mode, this keeps the ICE running constantly to keep the battery fully juiced and ready to unleash hell.

If you really need to get to work in a hurry, or demonstrate your handiness at a track day, you’ll need to flick to the farthest setting: Qualify. Qualify tasks the batteries and e-motors with deploying the maximum potential (162kW) prioritising performance over battery charging and should give you the best chance of setting a pole lap at the commuter GP. 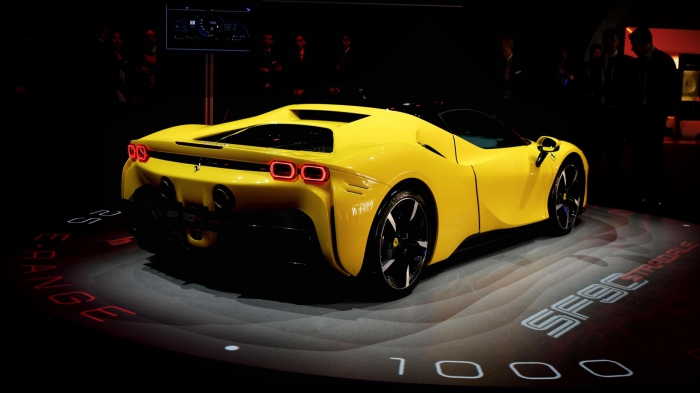 8) There’s a lightweight one

If the SF90 Stradale is a bit ordinary for you, then may we humbly suggest opting for the Assetto Fiorano pack, which reduces the cars weight by 30kg, and features a more aggressive rear spoiler and blown forged wheels.

These trick rims feature radial elements on the outside channels of the wheels that act like rotor blades, increasing the extraction of the air from the wheel and making that air join the flow along the side of the Stradale to further reduce the cars drag. Whether that’s something a mere mortal can actually feel from the driver’s seat is up for debate, but it’s a great stat to bore your friends with down the pub. 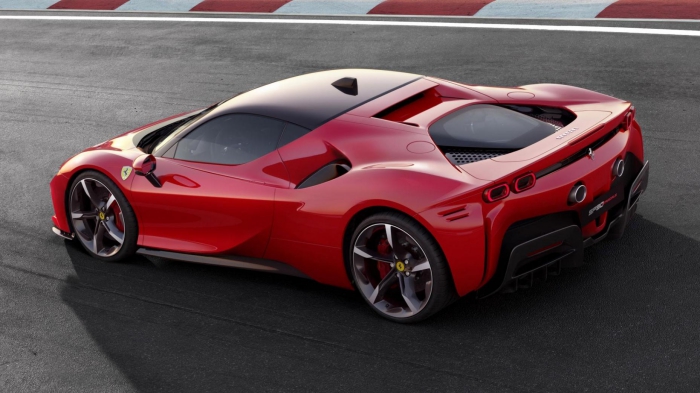 9) You actually stand a chance of owning one

While faster than a LaFerrari, the SF90 Stradale isn’t a limited series car, but a series production car, which means you don’t have to be on Ferrari’s Christmas card list to get one. Anyone with the funds to pay for one can apply… and you don’t need to own the back catalogue of the great and the good of Maranello’s creations to be eligible.

But it’s not all good news. Ferrari showed the car to 2,000 current and potential customers at a two-day event last week at Fiorano, and the order bank is said to be filling up rapidly. So, if you’re new to the brand, form an orderly queue or get very friendly with your dealer. 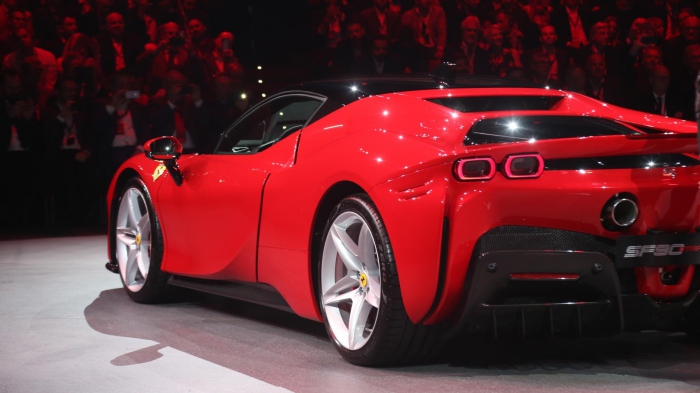 Following the reveal of the F8 Tributo (which seems strangely outgunned by the SF90) at the Geneva show earlier this year, the Stradale is the second of five new products we’ll see in 2019. When Top Gear asked Enrico Galliera if the other three were developments of current models he replied 'not all of them'.

So, the prancing horse product offensive continues, and while the SF90 Stradale is currently the fastest production car Ferrari has ever made (and it’s hard to compute how you could make things go faster) Galliera also confirmed that a replacement for the LaFerrari is in development and will be revealed in 2022. 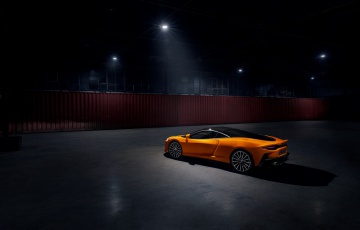 Here's the Roma, a Ferrari for Casual Fridays