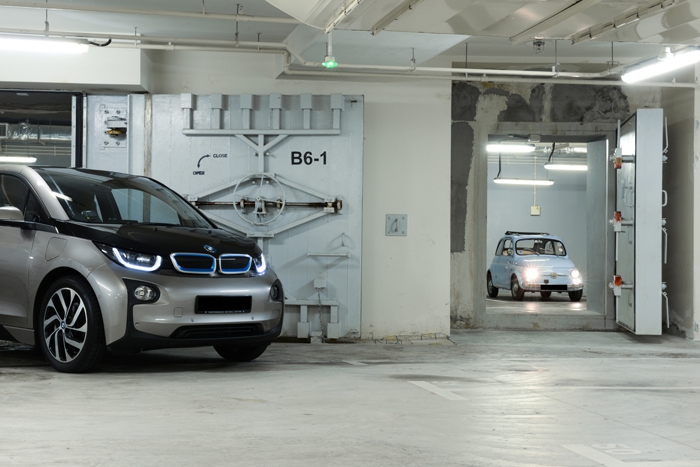 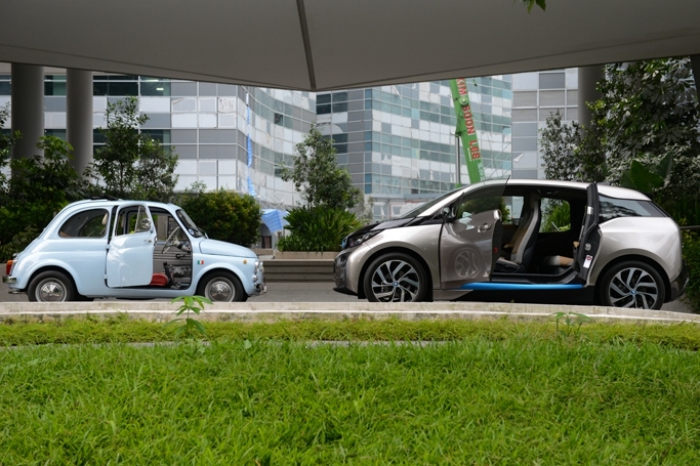 SINGAPORE - If we had to distil the essence of a city-car into just a few words, it would have to be ‘compact, cheeky, agile and well, fun for the family.

As the term implies, city-cars are urban commuters intended for the quick ins-and-outs of rush hour traffic, are nimble enough to stop on a dime to make that last-ditch dash down a tight alley to avoid a jam, yet all the while carrying four adults and their assortment of barang-barang.

Of course, by ‘compact’ we do mean a small footprint, but not necessarily small in cabin size, since the raison d’être of these design/packaging wunderkind normally sees an optimisation of the carrying abilities within the limited exterior proportions of the cars.

Case in point is the original Fiat 500 D ‘Bambino’ we feature here, which many feel defined this segment at its launch in 1957. In spite of their compact stature and rather humble beginnings, city-cars emerged out of the post-war era to provide a basic and cheap (to own and to run) level of transportation for the family and urbanites in confined built-up areas; such vehicles were lightweight for fuel efficiency, fascinatingly quirky and open to a wide interpretation by the manufacturers. 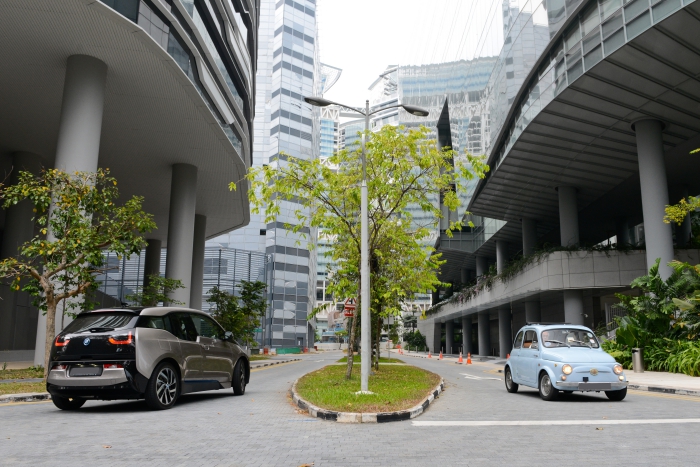 For instance, the Japanese kei-jidosha class of city-cars (that also includes vans and trucks), or kei-cars for short, stipulate precise dimensions and engine size to qualify for the tax class by law, and it is up to the brands to determine the ultimate form-factor.

Some of the notable variations on the kei-car theme in the mid-1990s include the Honda Beat, Suzuki Wagon R and in the late 2000s for Singapore, the Mitsubishi i. 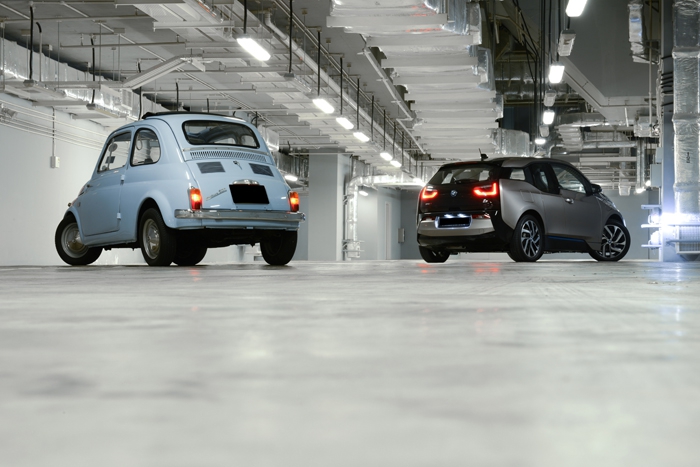 Although the 500 and its ilk were created to provide cheap runabout transport, the buying demographic was an eclectic bunch that even included the well-heeled who preferred to leave their fleet of sportscars in the sheltered garages at the villa.

Even today, there’s a certain snob appeal associated with this genre as owners of such city-cars would often have a stable of other cars at home too, but choose to run one for its anti-establishment cachet. Today, the immensely dense population centres in the world’s cities mean that road space is at a premium (or for that matter, any space!).

At the same time, the going environmental concerns of inner city pollution have created a new sort of demand – zippy, low/zero emissions commuting of the variety the BMW i3 offers, which we reckon is a compelling spiritual successor to city-car progenitors, such as the original 500.

Like its predecessors, the i3 is compact and light (by modern car standards), zippy and can be used for school-run and grocery forays into crowded cities with up to four in tow. 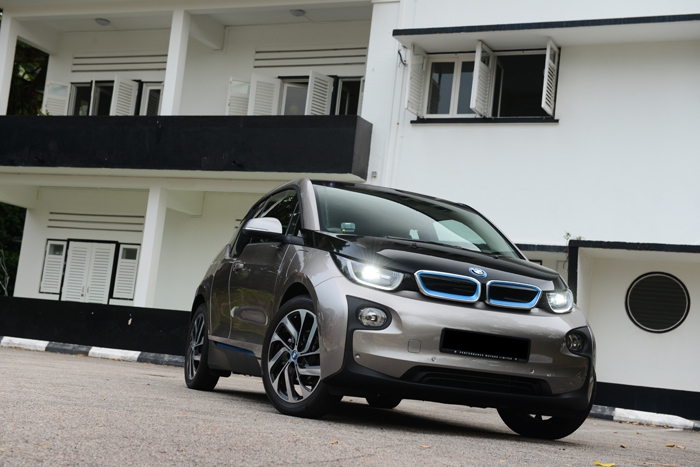 BMW i3 60Ah (REx)
Drive it before you diss it and whatever it is, don’t judge the i3 on face value alone, since we’ve established that its aesthetics aren’t to everybody’s tastes.

In fact, the first thing about the i3 that amazes many people is its commodious cabin space, a trait that is ably masked (we feel) by the scrunched-up, squinty headlights that give the i3 an illusion of being smaller than it really is. 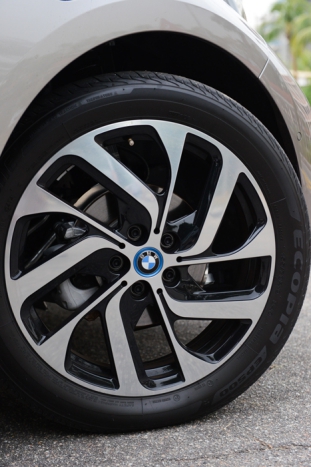 Even the skinny tyres made us think ‘weedy’ until you realise they are 19-inches, and then you drive it for the first time and go ‘wow’, since the i3 is unlike anything else you think it might drive like.

It’s unlike any electric vehicle we’ve ever driven, chiefly because the i3 is no casual retrofit or re-engineered effort to shoehorn EV hardware into an existing platform – these tend to result in uninspiring drives, awkward dynamics and poor vehicle packaging.

Everything about the i3 is bespoke and you would be doing it a disservice to presume it drives like any other EV you’ve driven so far. 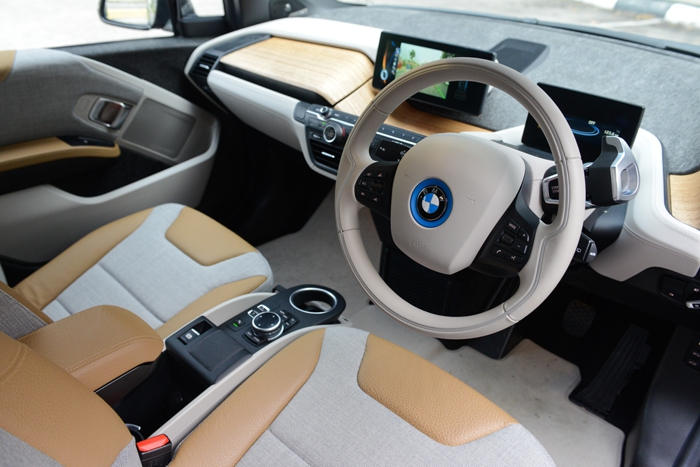 For starters, BMW has embarked on a massive exercise to set the i brand apart from the rest of its range. Both up- and downstream stages of sourcing and production are renewable and sustainable; for instance, the BMW i production plant at Leipzig is powered by massive wind turbines that generate enough surplus to be sold back to the grid, while the Moses Lake carbonfibre facility in the USA is animated by hydro-electric power.

Likewise, the cabin of the i3 itself has been crafted and created from recycled materials, which has been executed in a nordic chic style that we found immensely appealing, largely because of the intent and focus that has gone into the i brand. 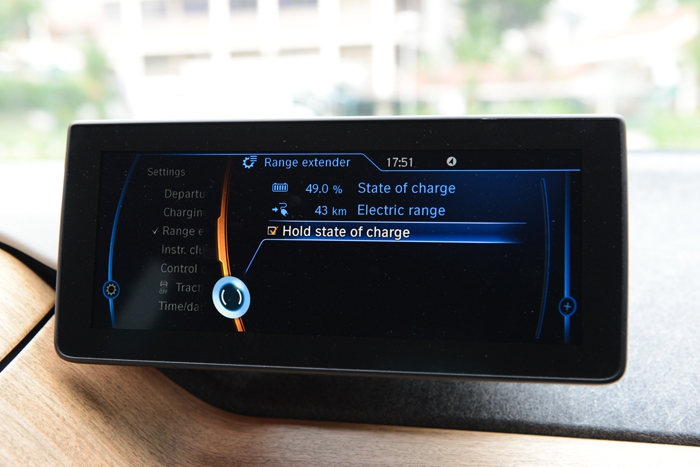 The i3 starts up with a chime like most EVs, since there isn’t any engine to stir to noisy life.

Combined with the REx, the total range of the i3 is about 300km, but truth be told, based on our driving cycle, we would only need to charge it once every two days. 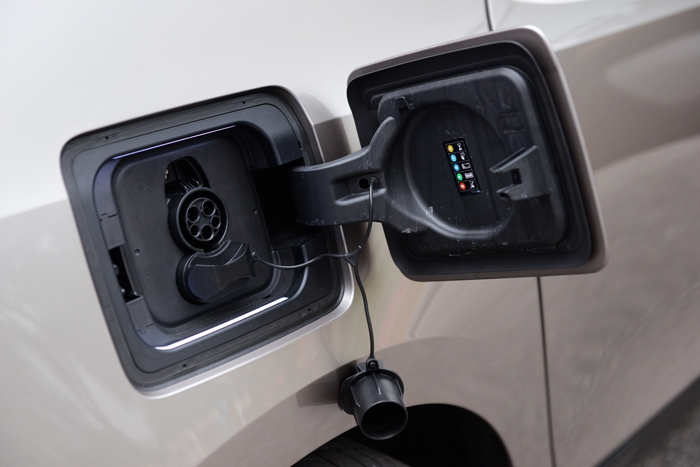 The i3 can be charged at Greenlots-managed parking spaces in malls and facilities across the island, as well as a growing number of CapitaCommercial Trust properties in the Central Business District.

To compensate for the weight of the electric hardware (230kg for batteries alone) in the i3, every effort has been made to cut weight with the use of thermoplastic for the exterior body-shell (save the carbonfibre roof) and carbonfibre for the Life module passenger cell – like the exclusive McLaren 12C/650S/P1 Monocell tubs for instance, albeit mass production in the case of the i3.

The 19-inch rims are forged, and bits of the chassis and powertrain are made from aluminium to reduce unsprung weight, all of which help the car perform dynamically. 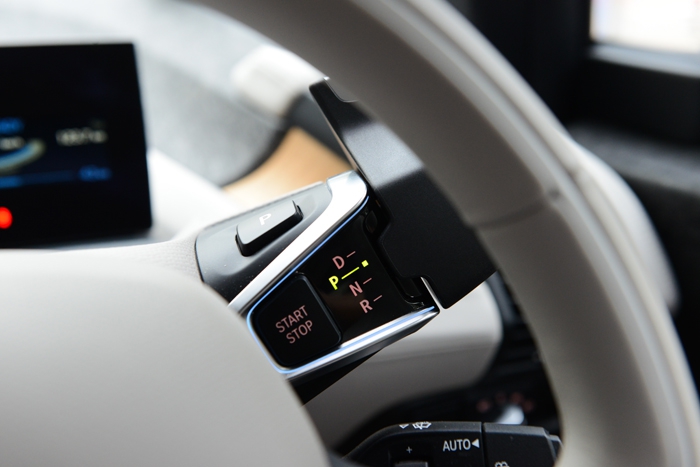 Forward propulsion is eerily quiet, but stupendously brisk for BMW's city-car. There’s no lag or hesitation as the gas pedal works as an on-off switch to fling the car forward like a bolt of greased lightning.

From standstill to about 60 or 70km/h, we daresay there are few cars that can keep up with a flat-out i3.

The access to such performance means you need to recalibrate your senses to appreciate that it’s actually possible to chart a smooth and safe course through slower moving traffic, since you’re practically in and out before anybody can even think of cutting you off. Visibility is good on the fast move, and there’s a sense of the i3’s proportions to let you exploit gaps in peak traffic, almost Matrix-style with everything else seeming to be moving two steps slower, both literally and metaphorically.

The steering is light and fully-electric, but you quickly get used to chucking the car into harder corners, especially once you’ve gotten accustomed to the strong regenerative braking effect when you lift-off the gas – in fact, this deceleration effect is so strong and predictable you soon learn to drive the i3 with just one-pedal, as you begin to time lift-offs to slow down for the traffic lights! If you’re going to mention the i3’s closeness in price to the 328i, then it isn’t the car for you. The i3 is far more than just another vehicle, because it represents an entire paradigm shift as far as ownership and motoring are concerned.

Like the original city-cars of yesteryear, the i3 will either serve as a single-car for young households, a starter-car for the swinging single, or be part of a larger stable of cars in the garage to ‘make a lifestyle statement’.

No one ever said that first adopter privileges and bragging rights came without a premium, and that’s exactly what you’re paying for – that subtle snub to demonstrate that you could have, but decided not to buy just another 3 Series. 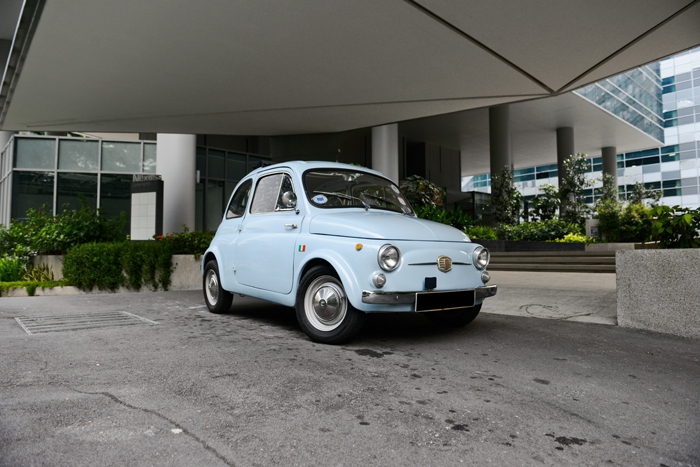 Fiat Nuova 500 D
The Nuova 500 was designed by Dante Giacosa, Fiat’s engineering maestro, with a rear-mounted air-cooled two-cylinder engine that would endure from the launch of the model in 1957 till 1975.

The terms ‘designer’ and ‘engineer’ mean a lot less in today’s committee-driven context than they did in what many regard to be the golden era of motoring; like Sir Alec Issigonis of Mini fame, Dante Giacosa was practically the one-man engineering and design committee that led the Nuova 500 project from concept to production (and many other Fiat models besides). These creations and veritable cultural icons were truly the fruits of their respective creator’s vision; they polarised opinions and defied homogeneity, as they never tried to have ‘something for everyone’... and they were all the more special for that. Also notable in the crash-diet 500 was its unsynchronised four-speed ‘crash-box’ transmission, since the car’s 500kg kerbweight and lightweight powertrain meant that the low inertia mass offset the gearbox’s lack of synchromesh.

Engaging first is a painful affair, but only for the first few times, as you very quickly get used to the cheeky 500’s eccentricities. The ‘500’ model name was particularly appropriate too, since it alluded to both this 1960 500 D’s kerbweight and 499.5cc engine capacity. The two-cylinder engine produced just 17.5hp, an improvement over the 13hp of the 1957 original. This allowed the 500 D to hit a top speed of just under 100km/h and a fuel consumption of 4.8l/100km; now remember this was a time when long highway stretches were a rarity rather than the norm (just 520km), and the whole of Italy consisted of trunk roads (24,900km!) and you’ll appreciate how it was more important for the car to handle such cross-country trips safely and quickly than to achieve a high outright maximum speed. In its whimsical baby blue and bug-eyed chic appeal, we’d be hard-pressed to find a hotter chick magnet this side of an exotic car, with one major difference of course. With an exotic, you’re only going home with one new ‘friend’; in the 500, you’ll be going home with a new friend and her two other friends.

The interior is honest, fuss-free and a study in minimalist simplicity, with exposed body-coloured metal instead of the fancy trim that even budget cars have these days. There’s no air-conditioning, but the 500 D has a roll-back soft-top for wind-in-hair motoring on cool nights. Don’t be fooled by its diminutive size, because it will accommodate up to three other occupants relatively easily – modern cars may have gotten bigger, but they’re not always more spacious – with the suicide doors of the perky hatchback providing a visual ‘wow’ appeal when opened, very much like the rear doors of the BMW i3. Call it Cinquecento, 500 D, Bambino or whatever you will, the Fiat is a cheeky, cheery cherub, and it exploits gaps in heavy traffic simply because of its disarming looks and pint-size manoeuvrability.

We’ve lost count of the number of times we were waved through by other road-users, since the honest innocence of the car’s philosophy translates to tonnes of goodwill going its way.

There’s no aircon, no entertainment and nothing else to speak of, but there’s an emotional response evoked by the air-cooled motoring experience, probably because the 500 is a product of a highly mechanical, yet unhurried era that demands feel and finesse to drive smoothly.