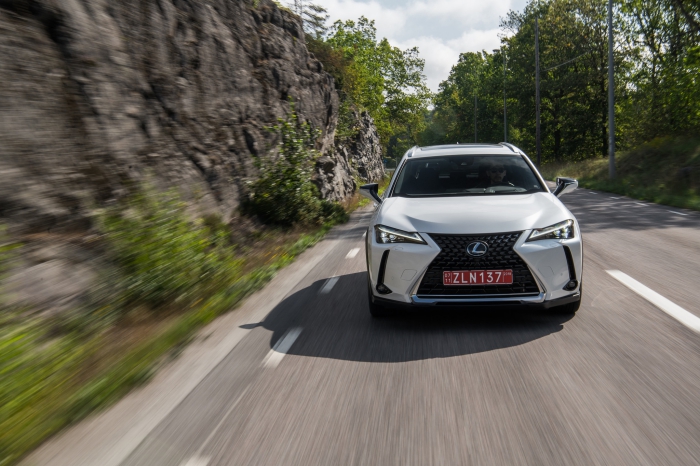 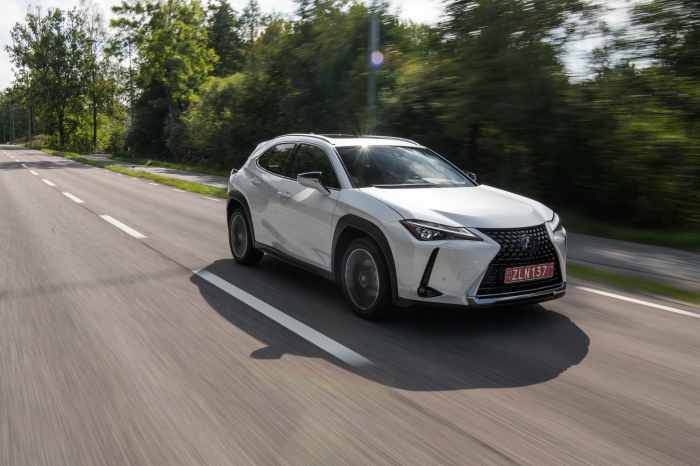 Stockholm, Sweden – The fact that Lexus now has a small sport utility vehicle (SUV) in its line-up will surprise only those who have been living in the town of Underrock, Nowhere, for the past decade.

SUVs, aka crossovers, are now fighting with sedans as the default body style for buyers all around the world, and they’re appearing in every segment from mass-market to luxury and, with cars like the Rolls-Royce Cullinan, even beyond that.

Lexus itself has a healthy SUV lineup. In Singapore it has the the NX, the larger RX (now with a seven-seat model), and abroad, the even-larger GX and LX models. 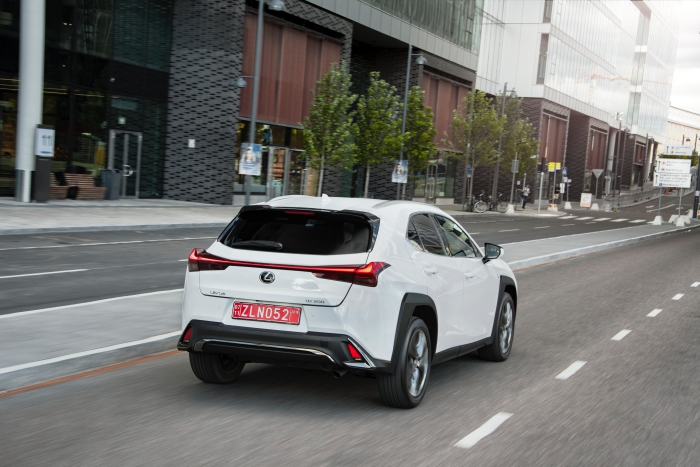 But the car shown here, which is the smallest Lexus SUV to date, represents a brave new world for the Japanese luxury brand.

In fact you could say it’s the first Lexus with truly broad appeal – while the CT 200h hatchback was its first small car here, as a hybrid with a disproportionate price tag belonging to a previous era you can imagine how it went down in Singapore.

Which just throws the UX further into positive contrast, really. 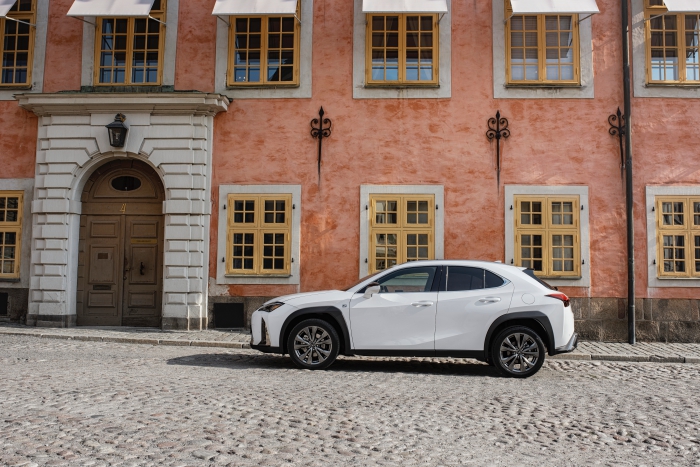 As a small, luxury SUV, it’ll very likely cost less than S$200k with COE when it goes on sale in Singapore in 2019 – a motorshow debut is expected – and those two characteristics means it stands a very good chance of taking the title of best-selling Lexus model from the historical stalwart, the ES sedan. 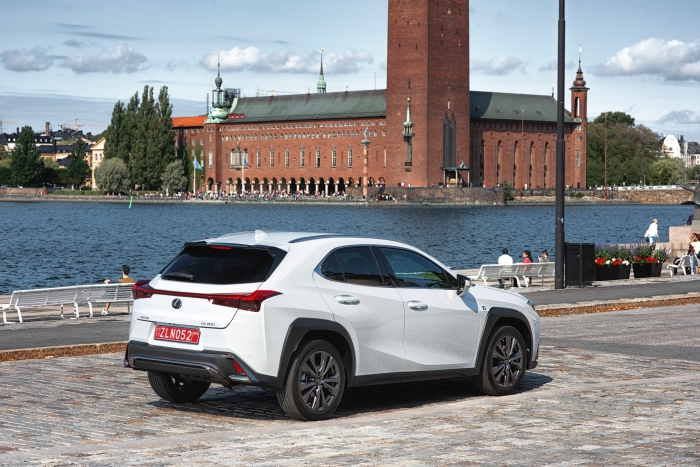 But to do that, the UX has to face some intense competition. In fact, because it’s so fashionable and crossover-cool, but still accessible in terms of price, the small luxury SUV segment is probably the toughest segment to be in right now. 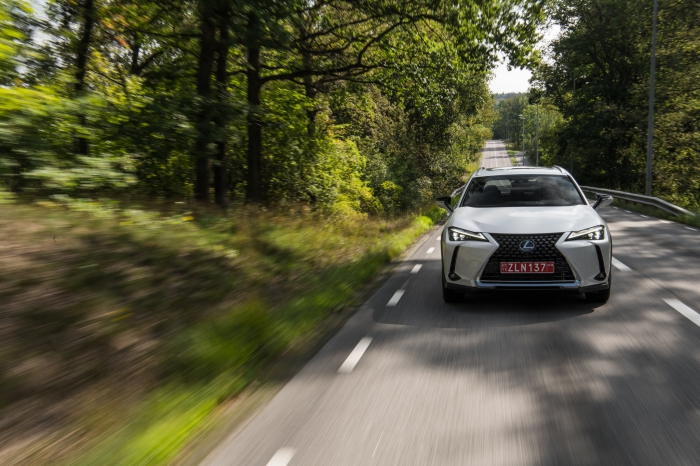 Off the top of my head, there’s no less than eight competitors the UX has to face or will have to face, sometimes with not one but two models per brand, like the BMW X1 and X2, Audi Q2 and Q3, Mercedes-Benz GLA, Infiniti QX30, Jaguar E-Pace, Volvo XC40, Volkswagen Tiguan, and some indirect competition from cars like the DS4 Crossback, Jeep Compass, Alfa Romeo Stelvio, Seat Ateca, and Skoda Kodiaq.

So it’s not surprising that the UX is a little different from the crossover crowd, probably because it has to be, and on another level, Lexus has always done things differently (to both its benefit and its detriment, more on that later), and now it’s also gone from a brand that simply made really refined cars to something quite different – its current ‘Experience Amazing’ tagline should give you a clue.

Its profile is a little lower, more hatch-like than tall crossover, and this was done on purpose. The chief engineer of the UX, Ms Chika Kako, says one of the benchmark cars for the UX was in fact the first-gen BMW X1 (which was based on the 3 Series, not the current X1 with its FWD UKL platform) and that she aims for the UX to be driven by people who would otherwise have bought a sporty coupe or hatchback. 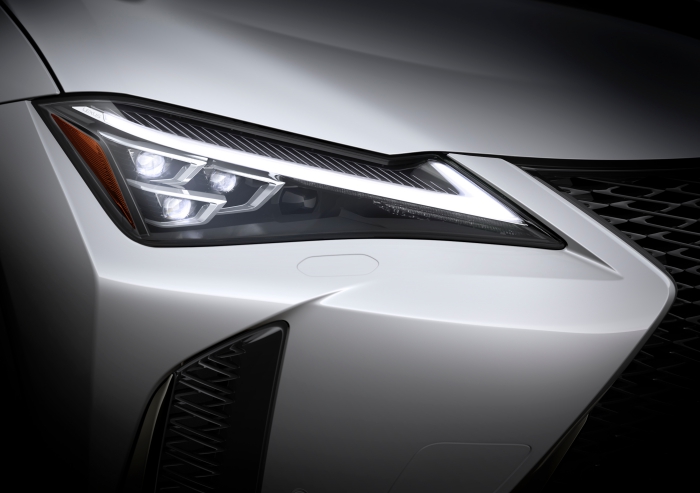 The new ‘edgy’ style of Lexus SUVs, first seen in the NX, is love-it-or-hate-it but it’ll be very obvious you’re not driving anything but a Lexus. Like its bigger brothers, the UX is for people who want to be seen, the ‘riot of angles’ design approach translating well to a smaller body. 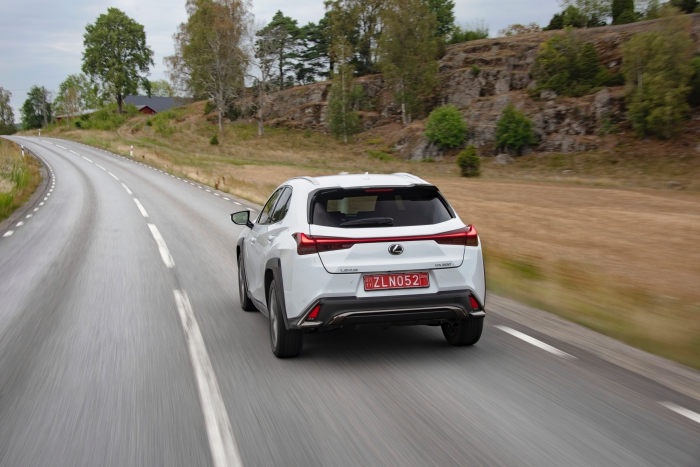 There are some novel touches, especially in the lights: the front three-cluster LED headlights are drawn from the LC coupe, while the tail-lights with their prominent L-section – and new full-width light bar – aren’t just visually aggressive, but also good for aerodynamics too. And to remind you just what Lexus SUVs used to be like, look at the previous-gen RX, and it’s obvious the UX ain’t your dad’s SUV.

Compact dimensions and a wheelbase of 2640mm reminds us that the UX is closely-related to another coupe-like crossover that’s very uncharacteristic of its brand – the Toyota C-HR. 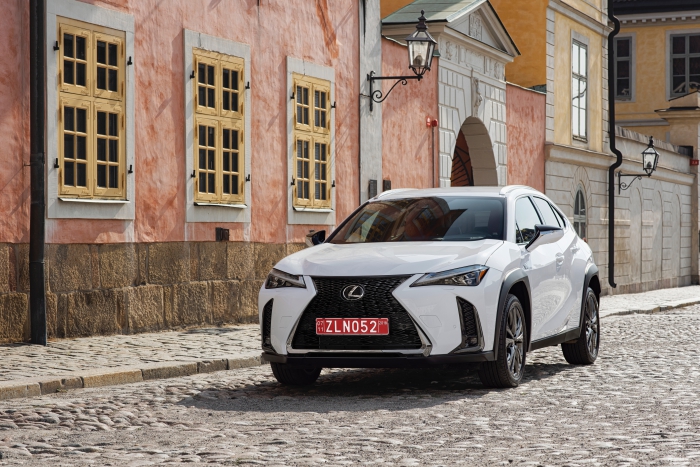 The platforms are very similar, but Lexus has applied much more work to its GA-C (Global Architecture - Compact) version by stiffening and strengthening it with new techniques like laser screw welding, structural adhesive, and it even focused on weight reduction by making the bonnet, doors, front wings, and hatch out of aluminium. Sorry folks, pulling the old ‘make your Harrier into an RX with a badge swap’ won’t fool anyone.

The cockpit’s more like an IS than an RX, there’s that sense of intimacy typical of Lexus interiors, bred not just by the material choice and fine execution, but also the UX has an obviously driver-centric layout, with the whole working environment canted towards you. 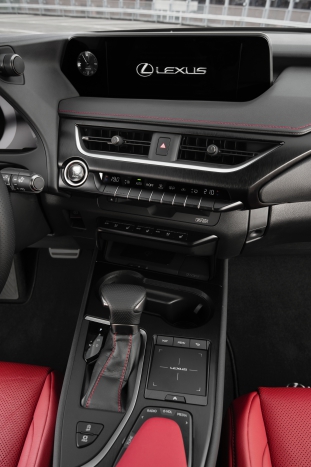 A 10.3-inch infotainment screen and 7.0-inch TFT virtual instrument display both feature crisp graphics, the former with the Lexus Remote Touch system, and there’s also a new ‘no look’ set of audio controls integrated into the handrest. Overall it’s a lovely place to while the hours away, the dual-tone upholstery, rich leather, and Japanese fabric inspired inlays all contributing to the ambience, and even the German competition fall behind here with their more mass-production-styled cabins.

The shortcoming here is space. If you’ve tall occupants in the front, then rear legroom does get limited, but four adults should fit comfortably. Just don’t plan on taking a lot of luggage, as the boot space is a mere 270-litres (the X1 has nearly twice that) because of model-wide design compromises. At least Singapore’s UX models, which all have 18-inch wheels, add under-boot space by ditching the spare tyre for a repair kit.

Driving the UX is a blend of familiar Lexus touches and some invigorating new blood – even without turbocharging and with Lexus sticking to a CVT. Singapore will be getting two models, the UX 200 and hybrid UX 250h. The interesting thing here is that they’re both powered by the same engine, a totally-new 2.0-litre inline four-cylinder unit. There’s no turbocharging on this, but with 171hp (178hp total for the hybrid) it hardly needs it. Lexus also claims the engine is one of the most thermally-efficient in the world, and the claimed efficiency figures back that up.

But, 2.0 non-turbo, and mated to a CVT – doesn’t it make for boring progress? The power delivery is also more direct since this CVT is special. It has a torque converter and a conventional automatic single-gear engaged during take-off and acceleration, so less of that soul-sucking CVT feeling, plus added benefits of improved CVT reliability.

From behind the wheel, it’s the refined, creamy power delivery we’ve come to know and love, with an added, direct edge, and you can wring out the 2.0-litre to its redline and things get quite enjoyable heated, plus it doesn’t sound like an appliance protesting.

The handling is well-judged, striking an easy-to-manage balance between overly active and sedate. The styling of the UX makes it feel larger than it is, like the C-HR, but you quickly get used to it with the typical Lexus relaxed accuracy coming through. 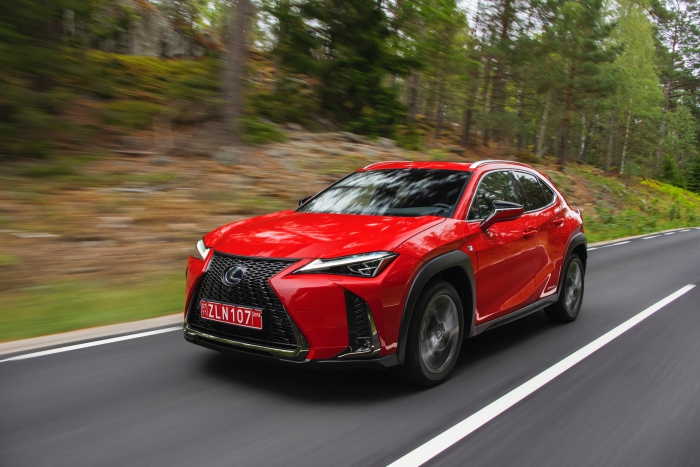 Like many classic Lexus models, the UX makes it easy to drive like a chauffeur as there’s no turbo swell to deal with, and you really have to be a pedal-barbarian to make your passengers sick, not to mention it’s the kind of car you can do a 50km cross-city commute in and feel good at the end of it. Our route through central Stockholm and out to the countryside (and back) proved as much. In the city, it’s refined as any Lexus, the ride quality is particularly outstanding. It’s plush without being lazy, and irons out Stockholm’s cobblestones and tram-lined streets with ease, in contrast to the vast majority of pitter-pattering crossovers today. At higher speeds, there’s more road and tyre noise than we’d expect. In Lexus terms, it’s honestly not that good, but in small SUV terms, it’s still pretty good. Let’s put it this way: There are crossovers that look worse, drive worse, and are much less refined. We had a very short stint in the hybrid, which proves an interesting proposition. The e-motor assisted torque makes it feel more like a conventional German crossover, in acceleration terms, although the expected fuel efficiency and possible VES benefits might turn this into the dark horse of the UX range. The UX is unique not just because it’s an entry into a new segment for Lexus, but we also see signs of it listening to what a broad span of buyers will want – competitiveness with the Germans in dynamics, performance, and price, but in a car still bearing strong Lexus hallmarks. It’s a rather unexpected approach, if you know how Lexus has operated historically, and happily it actually makes the UX one of the strongest Lexus models to date. The Lexus LC Convertible is a really good looking car

V8 up front, drive at the back, sky all around. Welcome Lexus’s prettiest drop-top