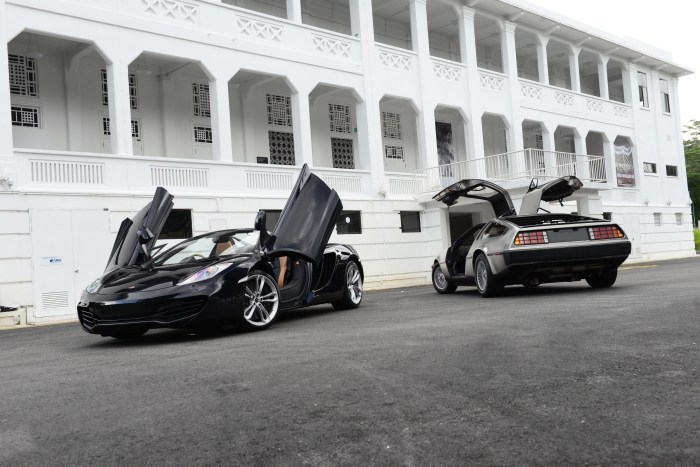 0930hrs. 17-March-2013. SINGAPORE – Our date with destiny is set and we arrive at Wearnes Automotive, Singapore's McLaren distributor, on an early Sunday morning.

The cluster of showrooms that McLaren is sited in, which also comprises Jaguar-Land Rover, Infiniti and Bentley, is eerily hushed with an anticipatory silence – a marvel considering this same area is typically teeming with life on an average weekday. 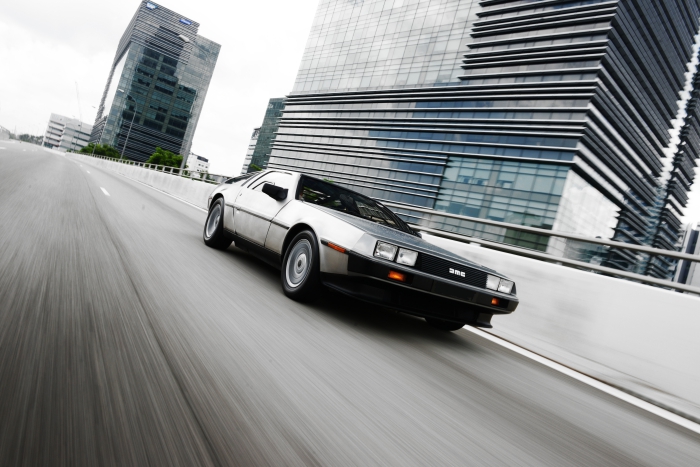 Then we catch a dazzling glint of sun on bare metal (this is full stainless steel, none of that prosaic 'frozen' paint malarkey that has become so popular these days) and a loud explosion of noise.

However, we should qualify that the explosive boom came from the construction site around the corner even as the gull-winged guest star (no, not Denis Lian, the owner) of this story and main protagonist in the Back To The Future (BTTF from now on) trilogy, 'The DeLorean' bursts onto the scene.

We'd like to think it trail-blazed its way into our present from some shadowy past, but its journey today only crossed national borders, as opposed to running its flux capacitor rough-shod across the space-time continuum. The arrival of The DeLorean (an original 1984 build car) interrupts our furtive peep-show, as we ignobly smudge the McLaren's showroom windows in the hope of catching sight of our chariot for the day – the 12C Spider.

Then we spot it with a tingle of salacious thrill: the Sapphire Black 12C Spider we're slated to take sits in a shadowy corner and flicks its gaze rather insolently in our direction as it keeps company with the seminal McLaren F1 road-car and an unclothed 12C chassis in all its naked glory.

Within the echoey confines of the showroom, the optional sports exhaust erupts to life in a violent cacophony, as the 98-octane fuel coursing through its veins quickly ignites. 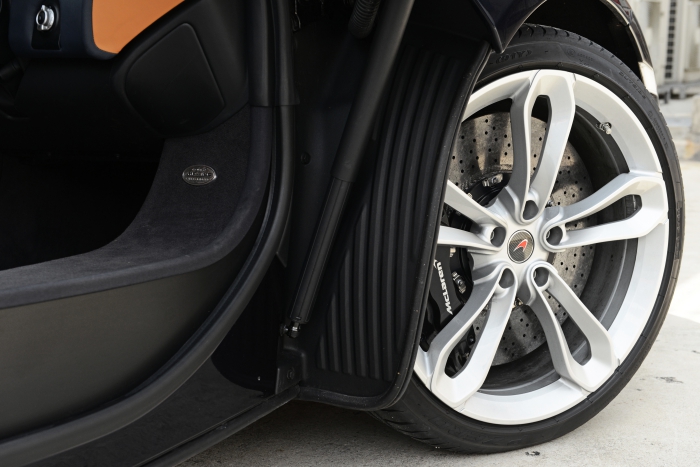 Why McLaren? Well, we've become so used to referring to her as The DeLorean that we'd lost sight of its model code: DMC-12, until a friend helpfully pointed out this anorak-worthy nugget, so we decided to make hasty arrangements for the iconic DMC-12 to meet the MP4-12C Spider.

Of course there's a lot more to the connection between this pair than just the alphanumeric bits; both have pretty cool doors too, which are pretty definitive for their respective eras. 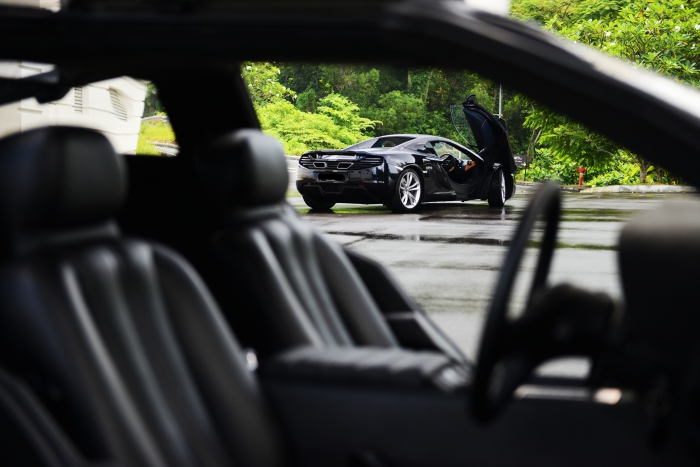 To us, the 12C Spider's sexy dihedral doors are every bit as dramatic and a natural, yet modern evolution of the DMC-12's gull-wings; besides, if we were going to go all-star gull-wings, we'd have used an original SL, but that would have been a meeting of two old cars and that's not what we were trying to achieve with this feature.

More importantly, we wanted to conduct a social experiment of sorts: we took to the hipster districts of Holland Village and Tiong Bahru in a bid to find out if an ageing 1980s cult movie hero still had what it took to hold its own against a million dollar modern exotic... in terms of grabbing eyeballs. The 12C Spider (yes, McLaren has started to drop the cumbersome nomenclature that so many felt gave the British sportscar icon all the appeal of a domestic appliance) is a delicious counterpoint to the Ferrari 458 Spider, since they are similar, yet so different.

For starters, in Spider guise, the 12C retains its engine showcase (all the better to look at the lightweight M838T V8, my dears!) and is altogether blessed with well-nuanced proportions that are almost pretty, yet possess a powerful masculinity; best of all, it doesn't lose its flamboyant dihedral doors, which adds a tonne of kudos to its street credibility; we reckon that the part of any exotic's appeal is its aural and visual drama. We had a chance to follow behind the 12C Spider when she was flogged hard on a previous occasion, so could appreciate how angrily vocal the car sounds driven hard, especially with the optional sports exhaust; it may not seem so from within, but it makes a mighty noise for everyone else outside the car to enjoy.

Inside, the exhaust is more sonorous than evocative, particularly at lower revs, but the moment the turbos come to life, the 12C slingshots into the horizon, leaving only the faint whiff of high-octane cologne and the howl of the V8 receding into the distance. 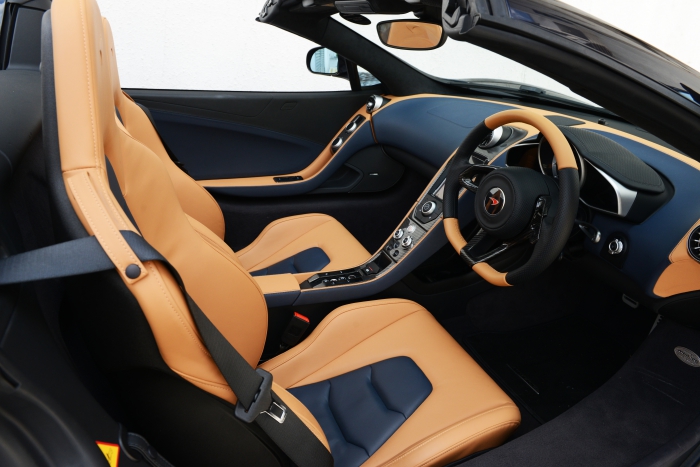 Call us old-fashioned, but the only black-and-tan we enjoy comes in the form of a pint of Guinness, so the testcar’s colour combination is an acquired taste and seems a lot older than the car's natural exuberance from its force-fed 3.8-litre’s 616bhp and 600Nm might otherwise suggest. 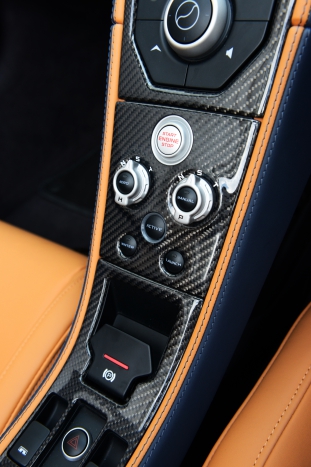 Furthermore, the patented MonoCell that forms the Coupe’s underpinnings require no additional strengthening for use in the Spider, with the latter weighing just 40kg more than the Coupe with its retractable hard-top system. As you can imagine, the magical 88mph (or 142km/h) to engage the time circuits comes up in next to no time at all in the 12C, so it’s not because there are no roads where it’s going, it just doesn’t need the run-up space!

With Singapore’s unpredictable tropical thunderstorms, working the roof on the move is a god-send – instead of cowering in an underpass in the faces of furious weather and equally furious girlfriend – 17secs is all it takes to work the roof, even with the car travelling at speeds of up to 30km/h. Like the Coupe, the Spider’s driver ergonomics are beyond reproach; at the helm, there’s always a good view all-round, which comes in handy when placing the car precisely.

Be it a series of B-road corners or around a circuit, the fat wedge of torque is always easily accessible at the behest of the right foot, which makes the 12C a tough contender to keep pace with when the going gets winding, especially if the engine is constantly kept on-boil.

Even better if it’s a series of corners you’re familiar with, because the thrill of nailing every apex will practically leave you panting to catch your breath from the sheer exhilaration of the workout. 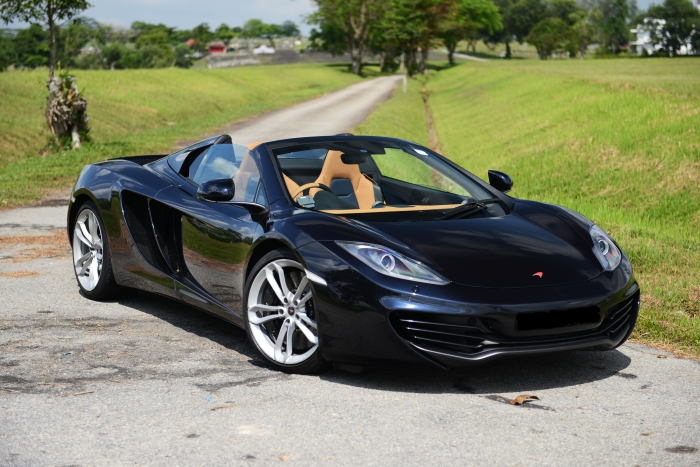 Roof-up or down, the 12C Spider draws eyes wherever it goes, especially since the 12C is still a relative rarity on our roads amidst the sea of Prancing Horses and Raging Bulls.

Unfortunately, unlike the DMC-12, which had pedestrians and motorists gawking in disbelief, as well as cheerily waved into lanes upon indicating, the 12C Spider had a much tougher time as far as road graciousness was concerned.

Thankfully, it wasn’t anything a prod of the gas pedal couldn’t surmount, since few regular cars are able to speed up in time to close the gap on the Mac Daddy. Park, splay open the doors and both cars garner considerable interest, well, if the reactions at our first stop of Lorong Mambong were anything to go by. From “it’s just a McLaren, innit?” to “isn’t this The Delorean from BTTF?”, the DMC-12 certainly held its own against the 12C Spider, with nary a hoverboard or fancy self-lacing Nike Air Mag in sight.

We gave clearance for some fanboys to take snapshots in the driver’s seat and it was pretty cool that they took a casual glance into the back of the car to see if a flux capacitor had been fitted. Compared to the earlier iterations of the Delorean, this relatively modern version has been rebuilt by the Delorean Motor Company (in 2009) and features higher engine and transmission performance, uprated brakes, seam-welding (versus spot-welding of the original cars) and a full stainless steel ‘backbone’.

If we were to delve deeper, certain parallels can even be drawn between the DMC-12 and the 12C, since both companies excelled in the use of advanced materials and production techniques for their respective automotive icons. With its full stainless steel armoury, the Renault/Alpine-sourced V6 (this PRV 2.8-litres V6 mounted in the rear of the DMC-12 was the result of a collaboration between Peugeot, Renault and Volvo) and automatic transmission are sorely tasked (we’re talking about 200bhp in a good year, which this particular car was rumoured to make), which makes hitting 80km/h a tough job, much less 88mph!

On the move, we could never get the BTTF overture out of our heads, so the hi-fi is best left turned off, or playing the BTTF theme on a loop! Like the SLS AMG Coupe, pull-strap extensions are available for ahem, shorter drivers to work the doors without looking awkward. Against the 12C Spider at full pelt, the DMC-12 is practically going in reverse, but the owner and ex-McLaren Brand Manager with Wearnes Automotive isn’t perturbed. 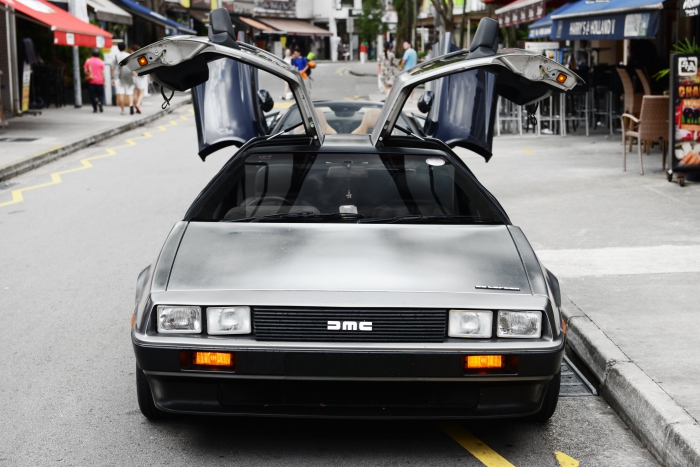 The amount of attention The Delorean garners at random kopitiams defies logic; the first order upon returning to the car is pulling out a piece of cloth to wipe away the smears and greasy palm-prints.

He shares how a kopitiam proprietress was amazed by the sheer number of devotees who converged upon the car to pay homage after it was parked and he had walked off. From our time with The DeLorean, every occasion out was an event of epic theatrics that surely rivals any modern exotic; whether parked or in motion, the finger was commonly gestured enthusiastically (the thumb not the other finger), with frequent requests for photographs with this piece of cinematic history. Instead of the resentment or jaded cynicism typically associated with examples of conspicuous consumption, everyone we encountered wanted a piece of the DeLorean experience, which proved to be an inclusive one that evoked responses spanning genuine wonder to outright awe, but always respectful and never irreverent (with the exception of our constant pi$$-taking!). Such back-to-basics appreciation of the automotive form certainly takes us back to less complicated times. These days, such simple joy associated with appreciating an automobile is something that has gradually been eroded from the Singapore enthusiast’s psyche, mainly because we’ve become so blah-se in the prolific spotting of modern exotic cars. Gullwing doors provide natural shelter from the rain as we adjourn for a post-shoot lunch (Photo: David Khoo)

This blast from the past may not have ripped the time-continuum a new one, but it’s certainly given us a healthy appreciation of old being not just creaky and leaky, but also gold. This feature first appeared in Top Gear Singapore #14 (May 2013)