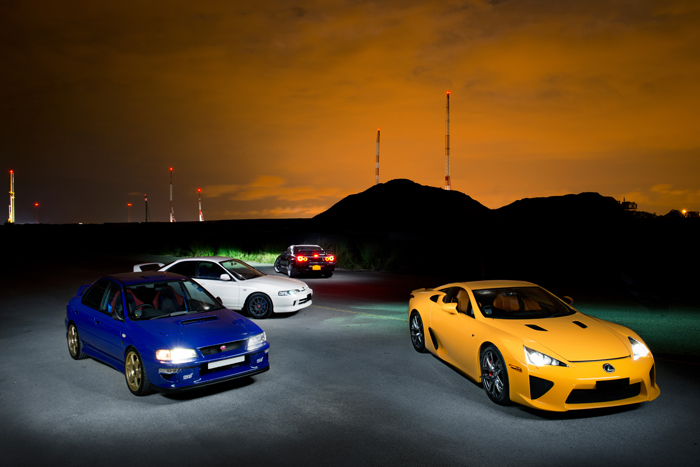 Badge snobbery is an alien concept to the true petrolhead, because cult cars transcend brand, price and country of origin (CLICK HERE FOR PART 1) 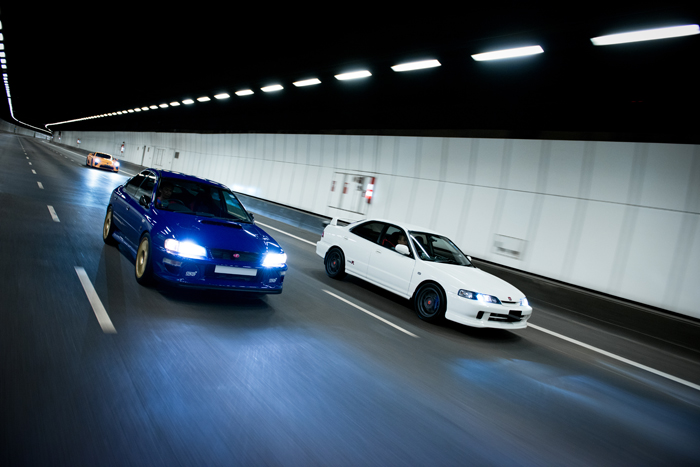 Japanese cult cars evoke all sorts of nostalgia, especially in the ‘autotaku’ who grew up during the 1990s of furious rally homologation monsters like the 4WD Lancer Evolution and Impreza WRXs.

Our ‘rally hero’ fantasies were fed on a steady diet of high-octane WRC videos and the late great Colin McRae’s mud-slinging exploits.

Closer to home, the late 90s to early 00s saw regular carpark rallies with all manner of Japanese exotica surfacing, not just in the roster of participants, but also among the spectators’ rides.

Although the Japan-only WRXs boasted close-to-STI levels of engine performance, the rest of the world had to make do with the less frenetic export-model WRX (the 276bhp STI JDM variant was also officially available at the time); even then, the WRX still saw 211bhp and 290Nm from the brand’s charismatic horizontally-opposed turbocharged four-cylinder (also referred to as boxer-four or flat-four), all in the stealthy shape of a sedan (or even more utilitarian wagon). 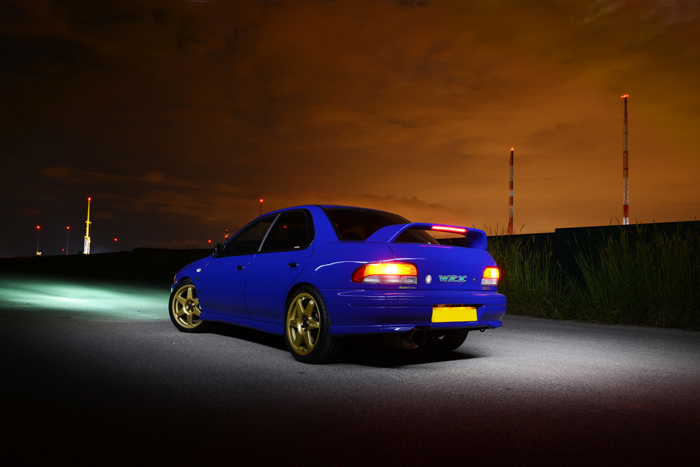 This example from 1997 has been given a new lease of life with Prodrive’s striking WRC’96 shade of blue, as well as the ubiquitous Compomotive-style alloys for that distinctive rally-inspired blue/gold combination.

The generation’s unequal length headers give listeners the boxer engine’s inimitable ‘buh-buh-buh-buh’ at idle, which quickly races towards a manic, fruity climax as you work your way up through the gears. 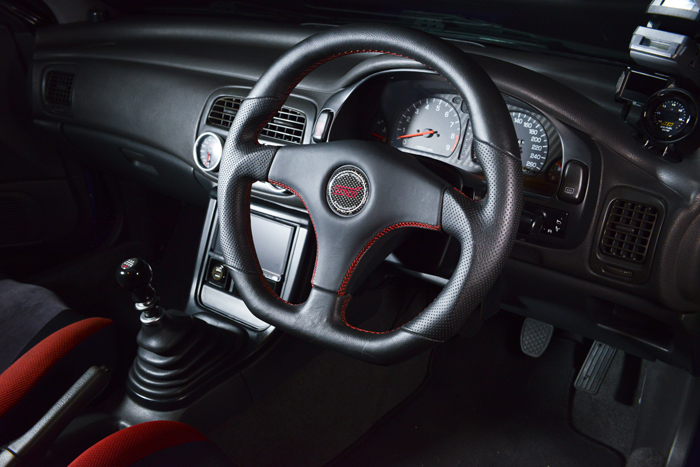 Compared to today’s iterations of the Impreza, the GC8’s sub-1.3-tonnes is positively flyweight.

An underbody latticework of Cusco bars and strategic damping struts help eradicate some of the original car’s rigidity issues, which when coupled to the feelsome naturally-weighted steering, make for a powerfully visceral yet agile drive. 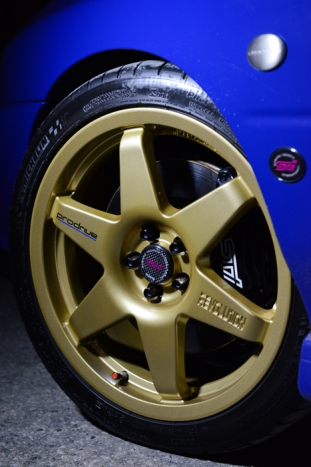 To keep things ‘motorsports’ with the GC8, straight-cut gears and a dog-box serve transmission duties, with a sweetly-spaced set of ratios that help ensure the turbo is always raring to go in practically any gear and any engine speed.

There’s minimal lag to speak of and before you know it, you’re deep in boost territory and ecstatically riding the wave of a huge turbo swell.

Driven properly, each ebb as you upshift from one gear to the next is barely noticeable before you’re enjoying that euphoria again. 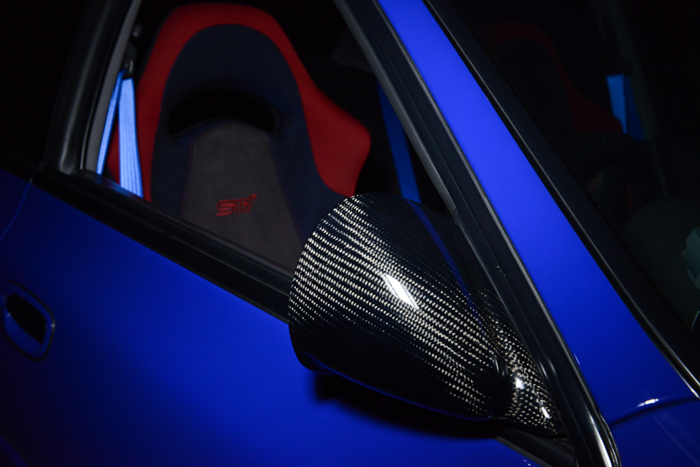 A huge misconception is the difficulty in living with such a gearbox in daily commutes: There’s some transmission noise (why wouldn’t there be? This car shares its roots with fire-breathing rally machines, remember?) but it just complements the melodic cacophony of the mechanical orchestra, so you’ll never need to turn the hi-fi on.

Repeated use gets you accustomed to the precision required in engaging each gear and you’ll soon be quick-shifting like the best. A common criticism of the era was levelled at the cabin quality, but in our weather, these Japanese cars have better stood the test of time than their Continental counterparts.

There’s also a refreshing minimalist simplicity about the cabin that lets the driver focus on the task at hand – enjoying the drive.

You need seats for two or three more? Get in the back, no fuss, no frills, and strap yourselves in for a rock-and-roll ride. 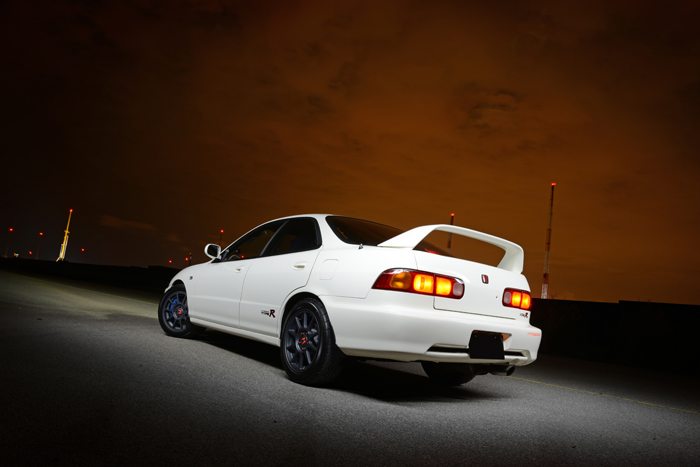 Back then, Honda’s ‘screamers’ added another dimension to the fast-four concept – in this case, both four-cylinder and four-doors.

Although the S2000 and NSX-R are firm favourites, if we had to pick the model that best embodied the era, it has to be the DC2/DB8 Integra Type R. 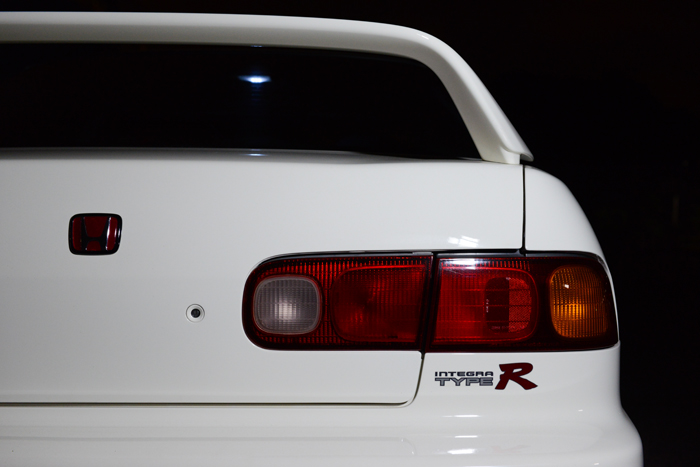 Both variants share the same sleek silhouette, but the flowing lines are broken by the DB8R’s rear doors, with the four-door longer in both overall length and wheelbase than its DC2R Coupe counterpart.

Spec-wise, this was one of the earliest Japanese models in its segment to offer Xenon headlights as standard from the 1998 model year onwards and they could be spec’d without ABS even to save even more weight.

The ‘R’ could well stand for ‘Race’, since everything about the car’s exterior and cabin was single-minded in function. 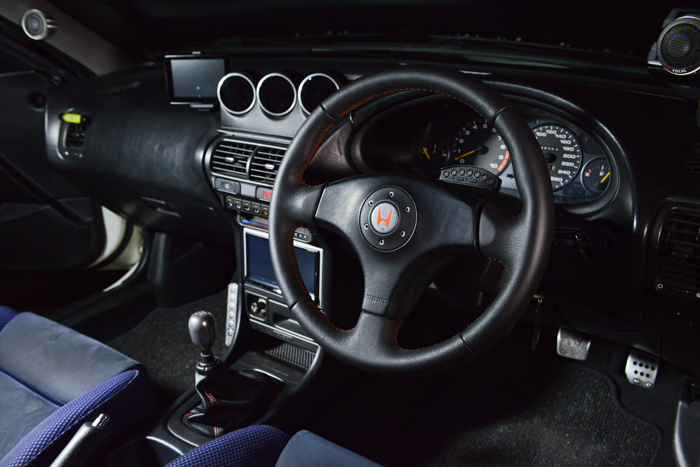 Reclining Recaro seats, a sports steering wheel, sports pedals and a titanium shift-knob were the main points of contact between man and machine… and that’s just the bits you could see.

Everything was calibrated to ensure the driver was in an optimum driving position for pushing hard... right down to the precise shift-weighting of the gear-knob.

Under its skin, all sound-deadening was removed to save weight, while additional spot-welds were added to the body for better rigidity – even the windscreen is thinner than usual for weight savings, and this is a great example of the sort of attention to detail we don’t see so much of these days. The faux carbonfibre about the cabin looks naff today, but that’s not the most important bit about the car as VTEC devotees will know.

Before the brand’s recent return to hybrid sportscars like the new NSX and turbo’d hot-hatches like the new Civic Type R, Honda’s party trick was in its zingy naturally-aspirated engines that could rev to kingdom come, particularly in these Type R applications. 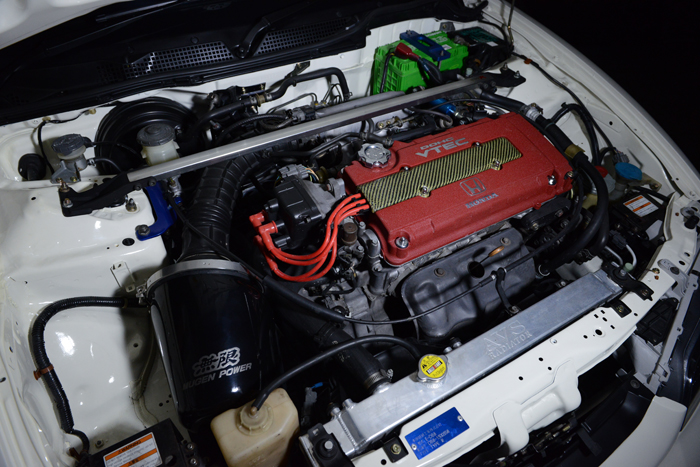 The 1.8-litre B18C5 engine at the heart of the DB8R is crowned with a distinctive red crackle-finish cylinder head.

Driven at anything under 5000rpm, you’ll wonder what all the fuss is about, and then you broach the VTEC crossover point to discover all mayhem unleashed.

Honda’s VTEC trickery in the DB8R controls both valve-lift and duration, so a wilder performance cam can be engaged at a pre-set rpm and throttle opening – the 197bhp from the 1797cc engine returns a specific output figure of almost 110bhp/litre… and this is from a naturally-aspirated engine, mind you. The induction note explodes in a frenzy at the VTEC crossover point and the rev needle races towards its redline… you quickly understand why there’s 10k rpm on the meter.

On-cam, the exhilarating thrill provides a buzz that is as addictive as any turbocharged fix, because this engine relishes the guilty pleasure from the pain you’re inflicting upon it, gear after gear after gear.

It’s almost tardy in daily drive commutes until you realise you need to keep it in a gear lower than you would normally, just so the blitz into the VTEC zone can come swiftly and surely. The advent of modern i-VTEC K-series engines would provide these high-strung cars with much needed low- to mid-range torque in later iterations, but there’s an unadulterated sense of wild abandon in flogging such older cars around, especially when complemented by the communicative chassis.

Cars like the DB8R were never about outright drag speeds, because the magic was as much in how the sparkling chassis spoke to you as it was in the engine. The R34 GT-R is a rare enough breed of Nissan’s ‘Godzilla’ on our shores, but the V.Spec II variant is even more so – this is the only one left in Singapore. Well, seeing as these cars are a bit of a tuner’s wonderland, we’ve yet to see a bone-stock GT-R in Singapore and this car is no different as it rocks up in BBS footwear and AP Racing brakes. The RB26 in-line six has already been tweaked for more power, especially since it’s no flyweight at over 1.5-tonnes. Most obvious on the V.Spec II is the NACA duct in the bonnet, although closer scrutiny reveals the bonnet is lightweight carbonfibre (as opposed to the aluminium of the other models) painted in body-colour. After the R33 was criticised for its proportions – we personally liked its styling – the boffins at Nissan have made things right with the R34, which blends brute musculature with the iconic R32’s silhouette, in addition to shorter overhangs and overall length compared to the R33.

The rest of the V.Spec II refinements are under the skin of the car to improve dynamics, and include an uprated suspension and larger rear brake rotors, on top of the V.Spec I’s kit – V.Spec or no, there’s no denying the powerful animal magnetism of the R34 GT-R when it’s on the move. On the move, the R34 GT-R feels light on its feet and nowhere near as heavy as it looks. Few of these cars are running stock tune, so there’s ample in-gear thrust from the six-speed stick-shifter that will keep you clinging on to the steering wheel for dear life as you slingshot towards the horizon to the accompanying howl of the lusty straight-six. Clifford thinks that the Lexus IS 300h is one of the best driving junior executive sedans out there.

And… it still has a CD player! No, we're kidding, but it got your attention right? A hardcore fan of the Lexus V8 F models weighs in on the 2021 LC 500 Convertible