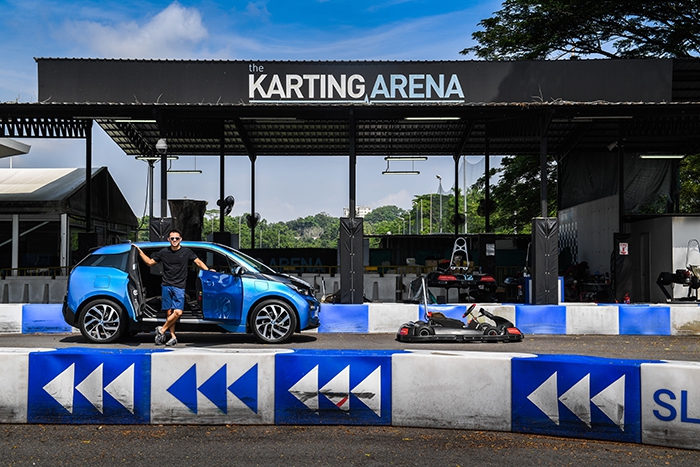 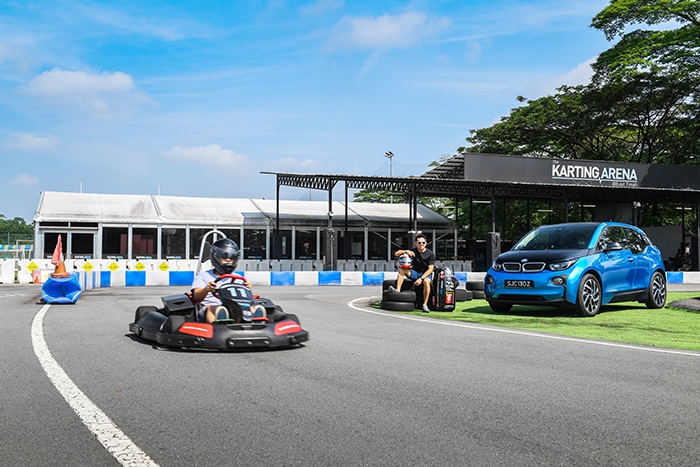 The Karting Arena, Singapore - By now, you’re probably sick of us waxing lyrical over the BMW i3, so we’ve decided to spread the love around. The person had to be a big enough tech geek to look beyond the i3’s love-it-loathe-it styling, as well as a dyed-in-wool petrolhead broad-minded enough to give the little electric-powered tyke a shot, particularly because you have to scratch a lot deeper to discover the i3’s party tricks. 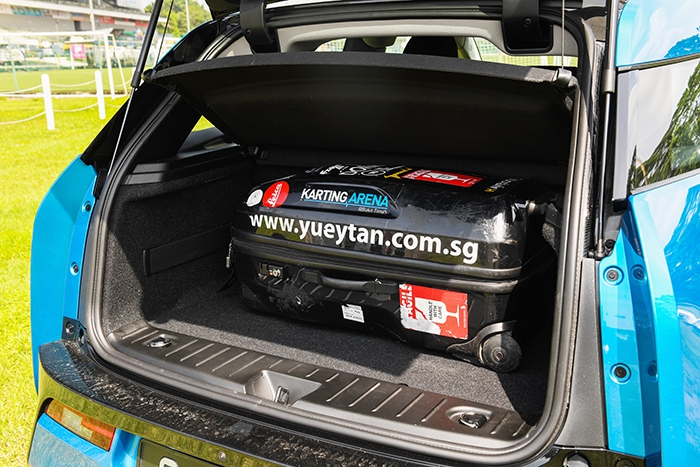 We have to give our pal Yuey Tan a “thanks mate!” for pulling our short straw and partaking of the i3’s jollies.
If you don’t already know, the high-energy Yuey races for Team Jebsen in the Porsche Carrera Cup Asia, is a huge fan of old Porsches, and even runs his own kart-track (The Karting Arena) populated by fully-electric gokarts, so he’s not just familiar with going fast in petrol-powered race-cars, but also the brutal, on-demand torque of electric vehicles.
If all this doesn’t make him a ripe candidate for our i3 appreciation session, we don’t know what will!
Yuey last tried the 60Ah i3 a few years ago, but the latest 94Ah iteration (with Range Extender for peace of mind and a range of close to 300km) promises a longer range and more compelling utility than before, especially as a city-commuter, but there’s no reason why one should be restricted to just Singapore travel.
Long-time readers would have seen we drove it up to JB for a day of ‘Meals & Wheels’ some issues ago, because well, Malaysia has a whole lot more public Type 2 charging facilities than Singapore. 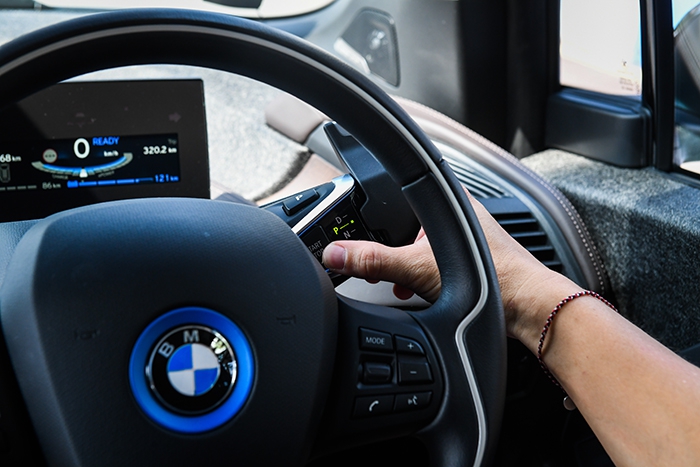 Despite the long interval since his last stint, Yuey takes easily to the i3’s operation – as they say, it’s like riding a bicycle; once your muscles have learnt how-to, that knowledge stays with you forever. The plug-and-play nature of the i3 is mirrored by the ease in which it segues seamlessly into real-life.
The reality is, something like the i3 isn’t “just another car”, because it represents a huge paradigm shift in mobility that you need to be prepared to embrace – also, and rather obviously, it has to suit your lifestyle. Although it could serve as only car in a single-car household, it also works well as a city runabout for folks with special sportscars in their garages that can then be reserved for proper drives. 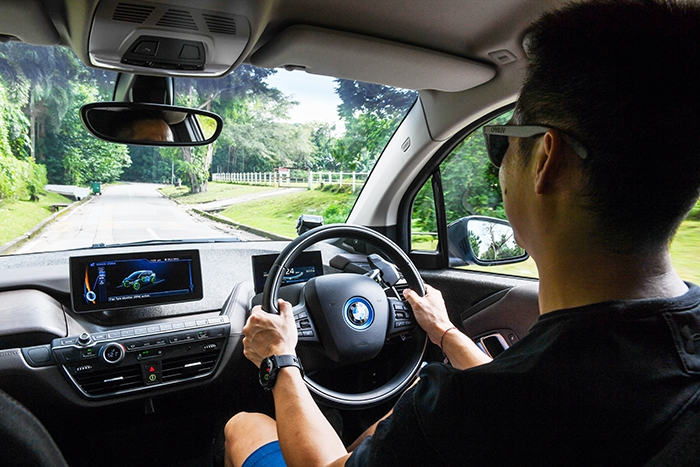 “So, what do you think are some of biggest misconceptions people have about electric vehicles?” we ask Yuey. “Most people don’t believe they can have as good a motoring experience in something electric as with a petrol derivative, be it for gokarts or cars. When people first come to our kart track and find out our gokarts are electric, the first thing they ask is if it’s going to be as fun or as fast as a petrol kart. We tell them the torque on an electric gokart is actually better, and it comes on instantaneously. Don’t forget, to get x amount of mass going from 0km/h to any given speed, it’s going to be a lot easier on an electric-powered vehicle than a petrol-powered one, with all its moving parts.”
In the case of the i3, it may be an 8secs car from standstill to 100km/h, but the 60km/h sprint, or city-friendly speed, is dispatched in just 4secs flat, which is plenty sufficient to dispatch many ICE (EV-speak for Internal Combustion Engine) contenders, with little effort we should add, not that this should be the whole point of the i3. Yuey continues, “After they get in and take a few laps around the track, they realise the ‘racing’ experience without the sound is something you quickly get used to, and folks find they can focus on the driving and fully enjoy the electric power.” The i3 faces similar issues, because there’s a lot of talk about electric vehicles and going green, but very few people have actually had a chance to experience it first-hand, so getting bums-in-seats take priority – after that, it’s usually down to price and preference.
“How did you find the drive?” we finally ask. “F*eaking awesome!” he exclaims. “I had the i3 for a few days and while its looks are an acquired taste, the performance is awesome. Although the car is heavy (the i3 tips the scales at just over 1.35-tonnes), it feels light on its feet: the i3 is very zippy and cuts through traffic adroitly – it is the perfect city vehicle. The little touches count too, such as having the batteries integrated into the floorplan of the purpose-built chassis, which helps create a low centre of gravity for better stability.”
It’s not just about the looks and performance, because Yuey pronounces the cabin “presentable and boasts a nice mix of materials – if it’s going for the organic recycled chic, BMW has succeeded.” “The other thing people don’t realise about electric vehicles is how little grease/mess/smell they create. For my gokarts, it’s a nice and clean experience for families when they come to the track,” he observes.
Likewise, the i3’s zero emissions credentials keeps the immediate environment as clean and green as you like, especially for young’uns around our garden city.
With Yuey babysitting his young nephews over the weekend, the i3 manages to acquit itself well, with convenient ISOFIX mounts in the back-seats. “The kids loved it and were really excited, because of the looks and drive – basically, the novelty of it all thrilled them.”

With a kid on the way for Yuey and the missus, ‘eco-consciousness’ is no longer just a catchphrase, but has to become a way of life.
Of course, we’re no saints, nor do we pretend to be, so the sportscars in the garage are still reserved for special occasions – in Yuey’s case, this involves early weekend morning blasts in his nat-asp V8 machine up North on sinuous B-roads to enjoy his favourite beef noodles.
“Experiences are always extra-special when you don’t have them all the time,” he explains.
Yuey concludes, “For commuting every day in the city, it’s not about the sound, smell or speed. I’m happy with a safe and comfortable car like the i3 that I don’t have to constantly pump petrol for, yet never makes me feel like I’m destroying the environment when I’m out and about!”
PHOTOS Zotiq Visuals / David Khoo
VENUE The Karting Arena, 200 Turf Club Rd, #01-01B The Grandstand, S(287994)
BMW i3 94Ah (REx)
Batteries: 353v, 94Ah, Li-Ion
Motor (total): 170bhp, 250Nm
(REx) Engine: 647cc, 2cyl
(REx) Power/rpm: 38bhp/5000rpm
(REx) Torque/rpm: 56Nm/4500rpm
Gearbox Single-stage auto
0-100km/h: 8.1secs
0-60km/h: 4secs
Top speed: 150km/h
LxBxH: 4011x1775x1577mm
Wheelbase: 2570mm
Kerbweight: 1365kg
Efficiency: 11.5kWh/100km
REx fuel consumption: 0.6l/100km BMW’s all-electric X3 will be launched later this year Will the first all-electric BMW i model to wear a familiar shape bridge the gap between EV and ICE stalwarts?