Close Encounters of the i3 Kind : BMW i3 94Ah REx Drive [Review] 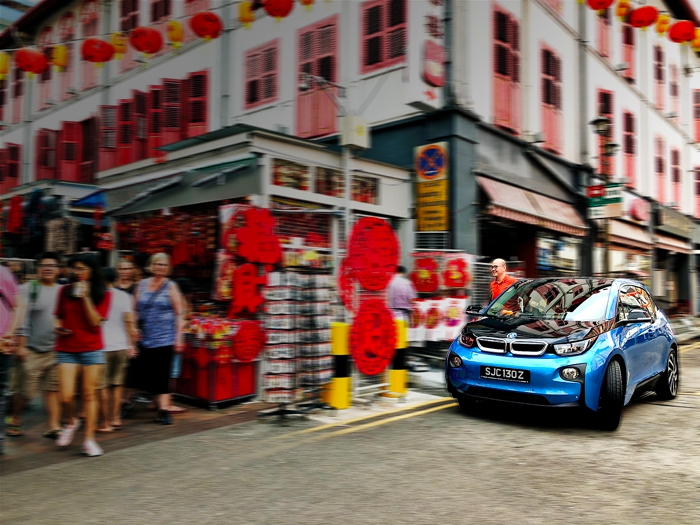 SINGAPORE - It’s a familiar sensation of mild distress and guilt. Mindlessly binge watching videos till 4am last Wednesday and forgetting to juice up the phone left me with batteries at seven per cent before lunch in a day of external meetings, sans charger and powerbank. Not smart. Once again, I’ve had way too much fun with a battery-operated toy to stop and plug it in. Except this time it’s an electric blue, zero emissions four-seater and thankfully there’s an on-board Range Extender to bail me out, a 647cc, two-cylinder generator that powers the batteries (and not the car, as some mistakenly think). 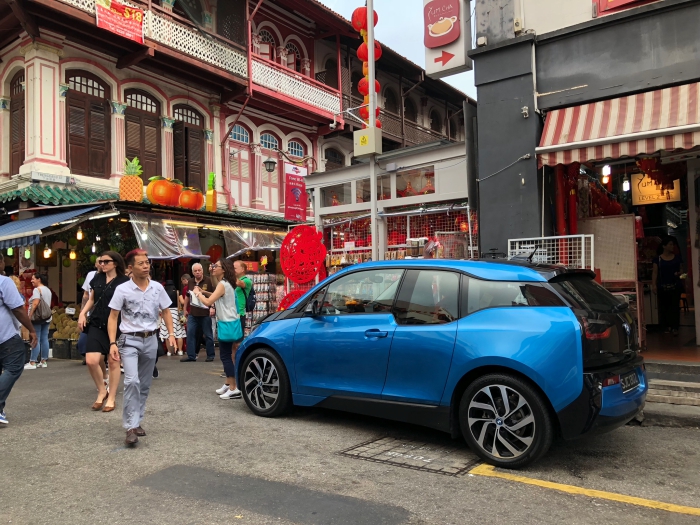 The new BMW i3’s larger battery capacity of 94Ah may carry it almost twice as far as its 60Ah predecessor under controlled conditions, but if Munich continues making them this much fun to drive, we’ll most likely be staring at a low battery indicator experiencing a sense of deja vu in future versions of the i3. 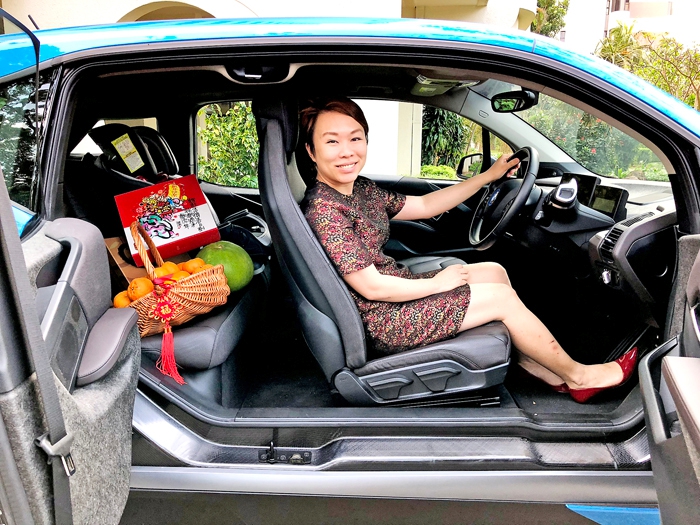 On paper, BMW’s new i3 is a modern marketing professional’s dream, with its energy-efficient, sustainable, eco-friendly underpinnings. Built using renewable materials, the i3’s production is fully powered by wind energy and up to 95 per cent of the car is recyclable. Its matte-print, FSC-certified, recycled paper brochure reads like a minimalist architect’s Instagram feed, softly painting the i3 as the ideal city commuting partner for our stylish, sport-casual, fully organic, gluten-free, single-origin coffee drinking leisure selves. 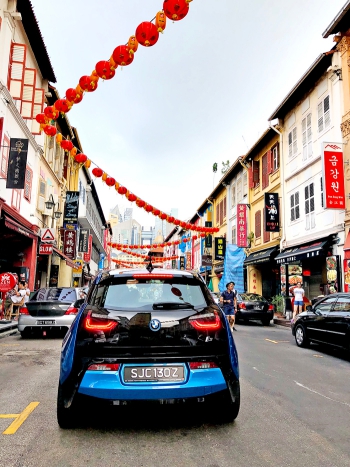 Until that first overtaking opportunity, that is, because under that cheerful, tree-hugging exterior lurks an ultra-lightweight, carbon-constructed, urban short-range missile.
Avid readers will know that it was love at first sight with the i3 for the Ed – the combination of smart packaging, brilliant driving dynamics and instantaneous torque in the original 60Ah i3 won many over from Day 1 (click here to read about the original 60Ah i3 and an original Fiat 500) and last November’s road trip up North (click here to read about our Meals & Wheels escapades in JB) in this updated version left the gang even more enamoured. 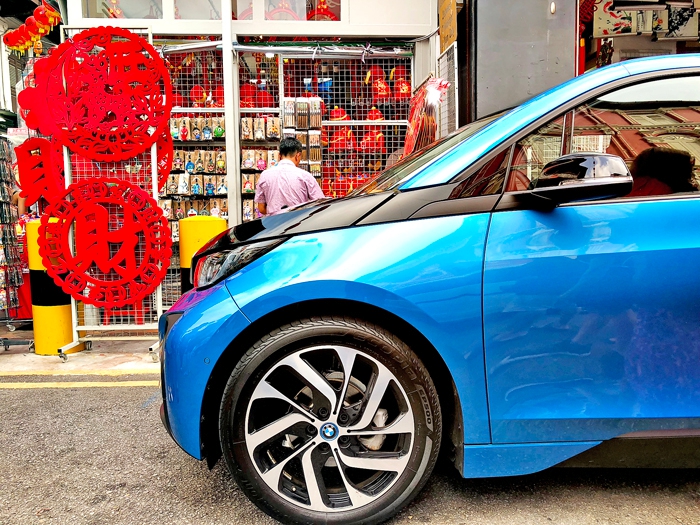 What better way to take a relationship to the next level than by making introductions to family and friends over the Lunar New Year?

TopGear Singapore (TGS): What is the first thing that comes to mind when someone mentions electric vehicles (EVs)?

Gene Kwee (Gene): That calm whirring noise of George Jetson’s spaceship! I’ve had the opportunity to ride in several EVs, but for some reason, my mind still places EVs in a somewhat distant future where we are all dressed like extras from Star Trek.

Su Lin: Running out of batteries! I have this fear of getting stranded alone on a highway because “someone” didn’t charge up. Does this sound familiar yet? So yes, that range extender backup was very reassuring. 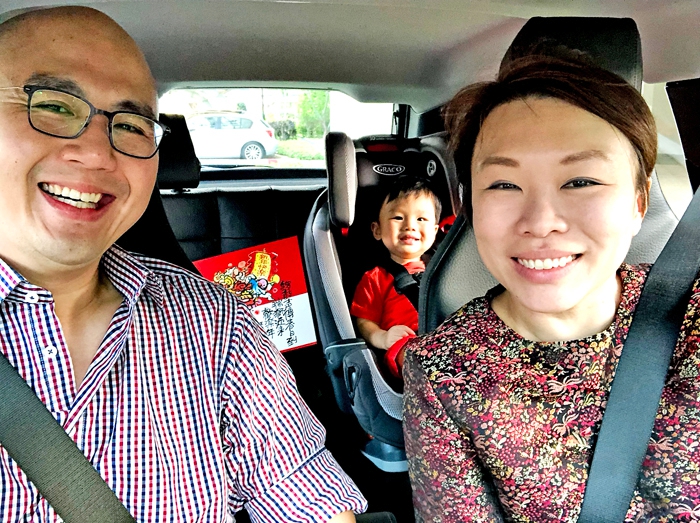 TGS: How was it like living with the i3 for a few days compared to your hot hatch daily drive? Did it change any impressions you had of EVs?
Gene: The timing could not have been better. Test drives might provide some initial ideas but having a car over several days, especially with the amount of driving for New Year visits, really gives an idea of how well it will fit into daily life.
Based on my experience as a passenger in other EVs, the lack of engine and exhaust noises was expected. However, where I think the i3 proves most surprising is from the driver’s seat and how practical it really is, despite its small size. So yes, I’ve become a huge fan! 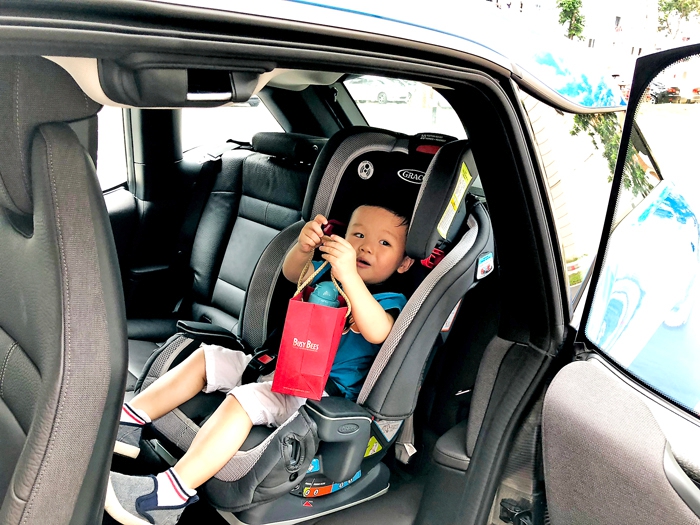 Su Lin: I enjoyed the peaceful silence of our journeys and the quiet, confident way the i3 picks up speed. Sure it doesn’t have the space of a mega MPV but the i3 is big enough for us. Of course, individual needs will vary, but it was a perfect fit for a small family like ours. It certainly got the stamp of approval from our little one! 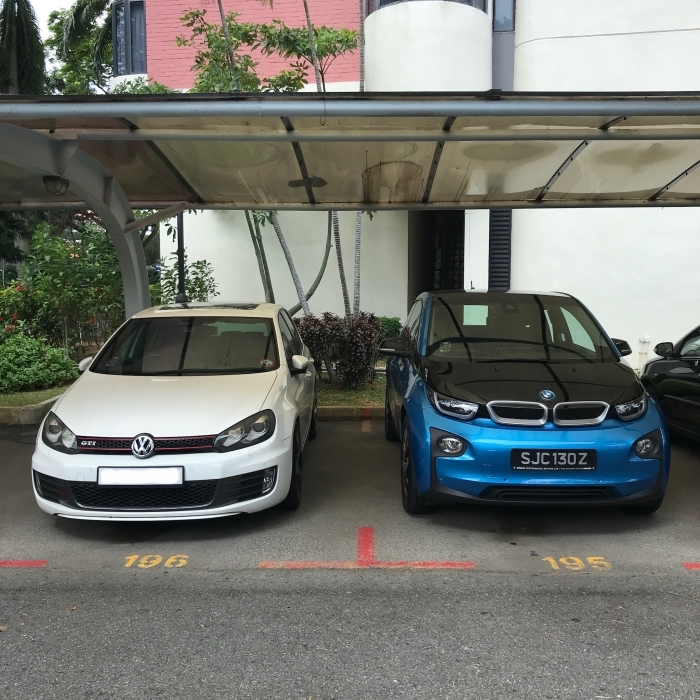 Gene: So some context is necessary here for a better idea of our needs. We have a two year old son and the car needs to be large enough to fit us and the boy’s barang-barang for a day out, with our helper occasionally tagging along. We clock about 250km a week, in mostly start-stop traffic.
Routes are the daily pre-school / work commute and short errands over the weekend so our current daily driver, a seven year old Mk6 Golf GTI serves these needs perfectly. Boy-racer reputation aside, the GTI is hard to beat as an all-rounder. It’s spacious, fairly quick and extremely practical – it’s brutally effective at moving furniture or a short blast up North...
Su Lin: ...and fun on track too! Frankly our next car has some really big shoes to fill and you can’t imagine the number of times we’ve discussed what would happen if we ever needed to replace the GTI. But I think we’ve found a front-runner in the i3 and after a few days, I like it even more than the first time we drove it! 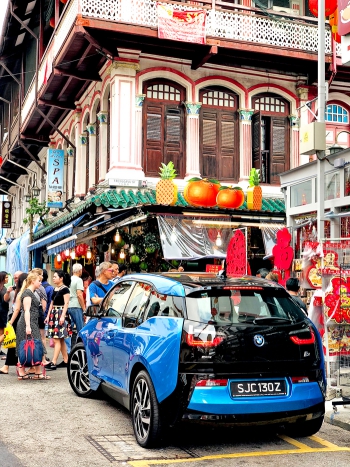 TGS: So you’ve had some experience with an i3 before?
Su Lin: Only for as long as our showroom test drive lasted. We tried the earlier version some years back and were surprised by how much we enjoyed it. The biggest impression then was the i3’s sharp handling and clever use of space, so we were looking forward to seeing how high the bar was raised with this new update. I think BMW hit it out of the park this time. It’s an innocuous little car with such a big kick! Gene: That’s the best part! With those odd looks, we simply assumed it would perform like a wheezy, glorified golf buggy, not something this enjoyable to drive. That immediate acceleration is extremely addictive and you really hunt down every little gap in traffic to shoot into, even if it’s purely for a laugh! Everyone's expressions under hard acceleration... no, of course we're kidding. This was taken with the car parked* (*yes, we need to qualify everything these days with self-righteous souls making things less fun for everyone)

Su Lin: I’m quite sure we bruised a few sportscar egos while overtaking. That surge isn’t something you expect and even after a few days, it’s still a little unbelievable. I like that it’s not a violent shove you get in one of these shouty, souped-up cars but a smooth, soaring sensation as you pull away with almost alarming speed. You wouldn’t guess it by those silly skinny tyres but it corners pretty well too.
TGS: We’re still doing a family car review, right?
Su Lin: Erm… for families in a hurry, maybe? Gene: Ah yes. Forgot about that one. In fact, the i3 checked the most boxes in the “family car” department! It might be narrower than the GTI and have a shallower boot but the i3 does a neat trick of feeling more spacious.
I think it’s because of the tall windows and upright seats. No empirical measurements here but we’re going by my little son’s proclamation that “the new blue car is soooo big!” as well as positive feedback on comfort from an XL-sized buddy who finds the GTI too tight. Su Lin: Our XL pal did also mention that the upright seating and leg position takes a little getting used to. I found the legroom in the back seat to be quite generous. The suicide door layout is unusual and I can’t decide how I feel about it.
On one hand, getting the little guy in his child seat is much easier without a door hinge in the way. However, the moment there are cars parked closely beside us, it gets a bit inconvenient to navigate the long front door and opposing rear door. It’s not a deal breaker, but one of those nagging little things you discover after spending a few days with the car. Gene: I also really like the effort that has been put into the design of the interior. Our test car came with stylish dark brown leather seats and classy sculpted dark wood trim on the dashboard. It’s a nice change to see premium materials like these and upmarket Harman Kardon speakers in a small car and hopefully this sets a trend for other carmakers.
There’s also the usual iDrive info screen at the centre and I’m glad the engineers decided to keep the instrument display simple with a digital speedometer, battery and fuel gauges that indicate how much further you can travel based on available charge and fuel level. Kind of like your phone telling you how many more minutes you have left on Netflix. 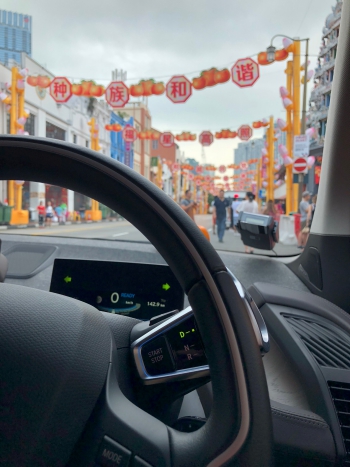 Su Lin: It was quite worrying watching the kms progressively reduce! Much as I love this car, there’s the very real issue of finding a place to charge it. All the marketing material is quite accurate: the i3 is great solution for city commuting. It’s quick, fun to drive and there’s enough space for comfortable short drives.
However, unless you’ve got a privately owned location to install a charger or charging facilities close to the home or office, getting a full charge is a real challenge in our country at the moment. Perfect as the i3 is for Singapore, I think the infrastructure has serious catching up to do before EVs like the i3 become truly viable. TGS: With the amount of visiting over the festive season, you must have met a lot of people. What did your friends and family think?
Su Lin: If anything, this car gets a lot of attention. We got curious looks from tourists, questions from friends and several requests for joyrides. We really like it and were, of course, very keen to answer questions from family and friends.
I think it also has a friendly puppy face which makes the car a hit with the kids! At one gathering, an army of little girls decided to take over the i3 and make it their battle fort! No boys allowed! Gene: It wasn’t just the young ones either, because we had several neighbours come over to check it out, and the one who spent the most time poring over the i3 was a retired gent who was keen to understand every nuance of how it drove and what we thought of the car. Before this, we had only exchanged pleasantries in the lift. I guess we are friends now!
Su Lin: People have been naturally curious because it’s such a special little car. I told a friend that the i3 reminded me of a Jason Mraz song –easy, relaxed and comfortable. Gene's grin goes goofy at the thought of driving the i3 one last time...