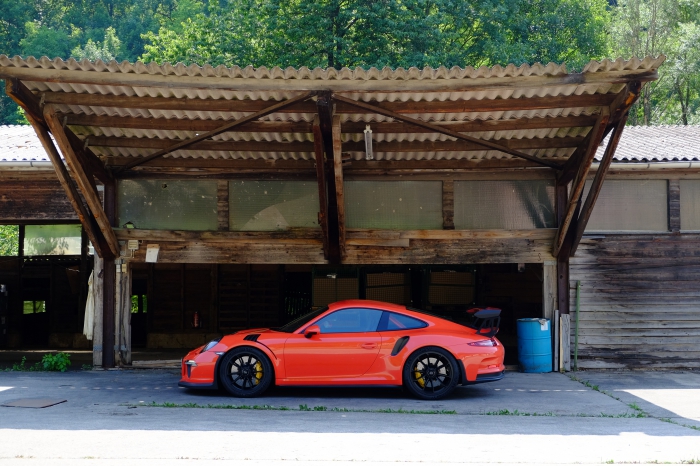 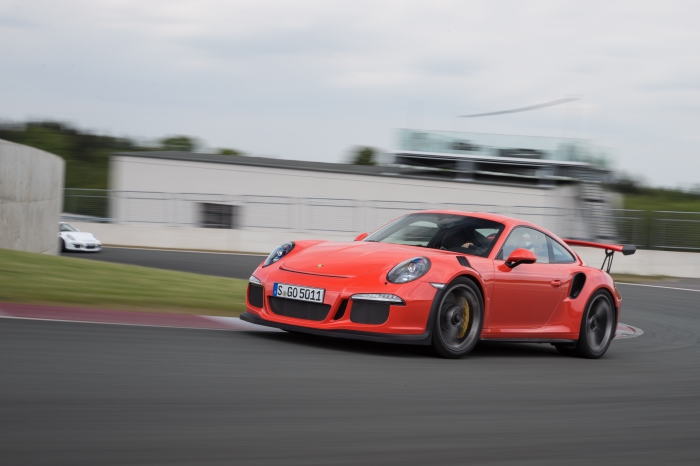 Up to a certain performance level, some cars work well as stick-shifts, the Cayman GT4, Boxster Spyder and even the 997 GT3/RS for instance.

Venture beyond that and the average human hand can’t effect the same consistent intensity and speed of gear-shifts corner-after-corner as a fully-automated system, regardless of how often you may tackle the one-armed bandit or choke the chicken. 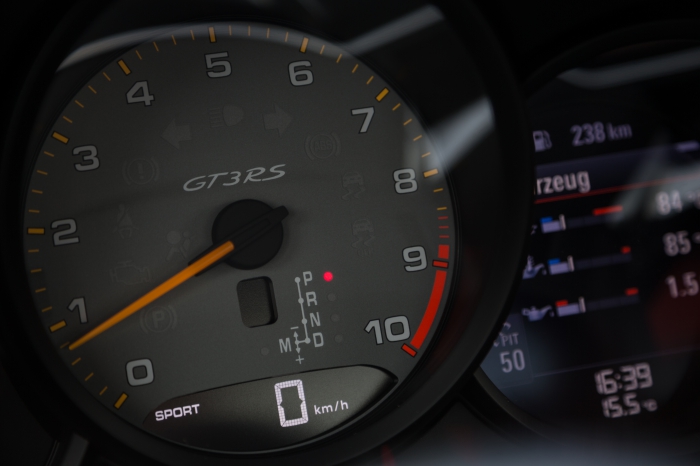 However, if anything, the type 991.1 GT3 RS proves that even without a sweet stick-shift honey-pot to manually stir, it’s more than capable of bringing the sort of sweaty pleasure-pain many would better associate with the trendy Crossfit fitness movement – strained grunts and O-face contortions included – and that’s just on the sinuous B-roads we had a chance to work it on.

Drive impressions of the 911 R HERE

‘Porsche DNA’ is commonly bandied about by the brand’s owners and devotees, but this is something intangible that goes far beyond pose-worthy outrageous body addenda and aero-kits.

In fact, one can only appreciate it by actually driving the cars, and yes, this tally even includes Macan, Panamera and Cayenne.

There’s VW Group platform-sharing and then there are the Porsche equivalents, so saying you’ve driven one just because you’re in one of the various anonymous VW/Audi/Seat/Skoda versions is to do the brand a grave injustice. The various GT3 RS models across the post-aircooled generations were racing homologation street-legal manifestations of the motorsports cars, which just about shared a common shape with the normal 911, since engine (pre-991 variants were still animated by the legendary Mezger motorsports engine) and mechanicals were closer to their racing brethren than the 911 Carrera road cars. 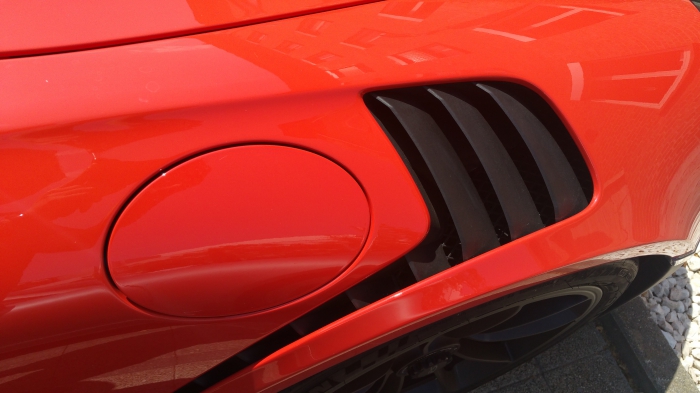 The (re)-introduction of a RS variant, albeit as part of the GT3 range, in the type 996 also marked a pronounced shift towards track-readiness, which saw the use of more aggressive aero-kits and addenda to maximise downforce and grip levels, both of which made the most sense on the race-circuit that was both the stomping ground, as well as the birthplace of the GT3 RS. 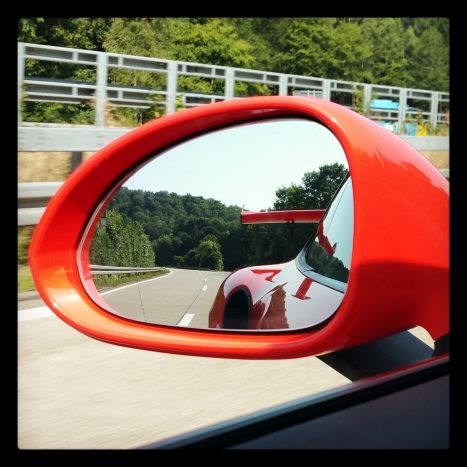 Our intense, whirlwind affair with the 991.1 GT3 RS was a quick same-day-in-out escapade to Porsche’s Werk 1 in Zuffenhausen, Stuttgart – a forty-five minute shuttle flight from Munich where we happened to be based that week.

Time was of the essence so we had to forego the epic ‘Tomahawk’ steak at the Restaurant Christophorus in the Porsche Museum to start the drive straightaway.

The lurid Lava Orange test-car wasn’t difficult to spot in the car-park – heck it’s so fluorescent it could probably be spotted in pitch darkness! After the colourblindness wears off, your eyes take in the powerful wide-bodied stance (thanks to its Turbo body – all the better to accommodate the rear 21-inch footwear), humongous GT Wing, aggressive musculature and those louvres in the carbonfibre front wings – these work with the front aero to generate extra downforce. 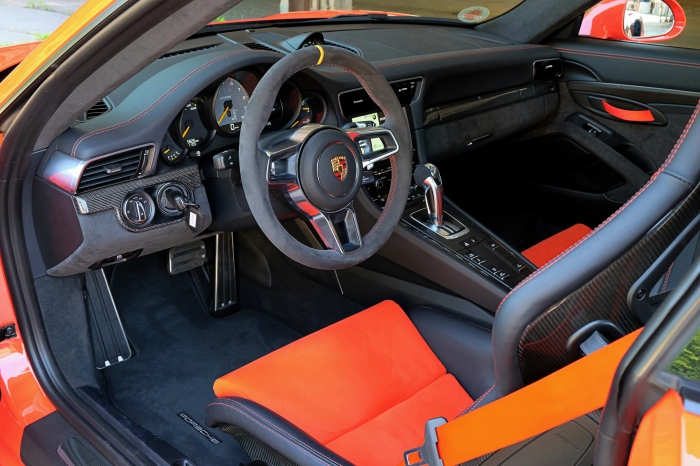 Like its predecessors, the 991 GT3 RS combines weight-loss, high-power and incisive dynamics to create a potent performance cocktail and visceral driving instrument – a lean mean driving machine in all senses.

The naturally-aspirated 4.0-litre flat-six, a rarity in a world drunk on turbo torque, is tuned to produce 500bhp and 460Nm.

Mated to the 7spd PDK, the car will see-off the 100km/h sprint from standstill in 3.3secs and a 310km/h top speed – while these are impressive figures for bar-room bragging, such outright pace isn’t the point of a driver’s car like the GT3 RS. As a crucible for Porsche’s technology know-how, the GT3 RS includes a raft of advanced weight-savings measures with the use of advanced materials, such as the magnesium roof, CFRP front lid and front wings, rear lid and rear wing, as well as polycarbonate rear and side windows.

Elsewhere, there’s a smattering of aluminium and the rear silencer is in titanium. It tips the scales at a little over 1.4-tonnes – that’s 10kg less than the current GT3 and this is in spite of the RS’ wider-body and larger tyre/rim combination. With the roll-cage and Sports bucket seats (these are the ones found on the 997.2 GT3 RS, not the full bucket seats like in the 918 Spyder), the car’s rigidity and well-sorted damping are such that your bones don’t even protest half as much as you’d expect them to when you’re going at it on the German country roads, since the car never hops, skips or jumps over the bad bits.

The zesty Lava Orange treatment extends to the cabin as well, with the interior awash with orange accents, and the car attracted its fair share of attention in every small town we entered. Like the last of the Mezger-powered 997.2 GT3 RS, the new direct-injection engine is naturally-aspirated and displaces 4.0-litre.

Derived from the 3.8-litre in the 991 GT3, the RS’ extra displacement and engine performance comes from a 4mm longer stroke, while a newly developed crankshaft, which is constructed from a super-steel alloy also used in the 919 Hybrid LMP1 race-car and in Formula 1, helps the engine scream to an electrifying 8800rpm.

Pedal-to-metal, the vivid explosion of sight and sound that is triggered is no different from discharging a firearm, and an automatic one at that, considering the GT3 RS is capable of accelerating with a rapidity that will turn any atheist into a God-fearing person.

You begin looking even further ahead to set the car up properly for each corner, since you’re almost upon the next one a scant hastily-gulped-breath after the previous one, and you vaguely even recall a short straight in-between. 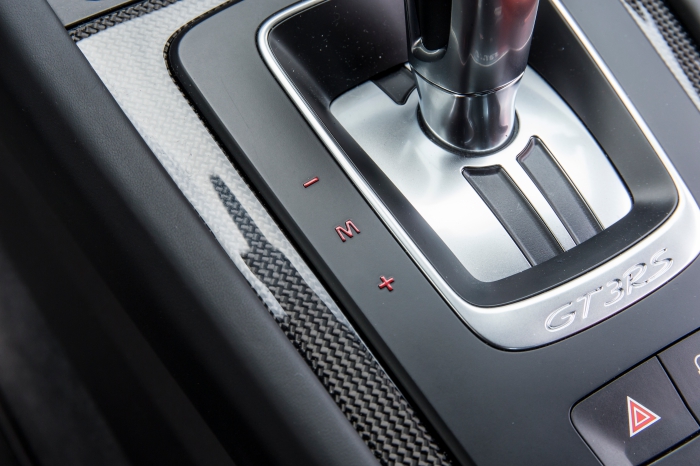 All the controls are perfectly weighted, from the steering to the PCCB carbon-ceramic brakes and even the rifle-recoil ‘shift-shock’ of the PDK as each gear is hammered into place.

The gas pedal is reactive rather than hair-trigger sensitive, so a measured flex of the right foot determines how much of the engine’s mojo is doled out at any given time.

On the move, you feel every nub on the tarmac and you’re constantly bombarded by an incessant stream of communication from road to your senses by way of the GT3 RS. Left to our own devices, this meant full-on automotive Armageddon whenever the roads were destricted and clear – and no, nothing quite beats the sound of a high-revving nat-asp engine as it screams towards the redline.

Paired to the PDK’s close-ratios, the ferocity of the engine’s performance boggles the mind as you barely have time to snatch each gear in quick succession via the paddle-shifters – I’ll be the first to concede I’d be hard-pressed with a manual-shifter to match or even come close to the PDK’s shift-speeds corner after corner after corner. Like the 991 Turbo/Turbo S/GT3, the GT3 RS features rear-axle-steering, which we feel to some extent overcomes the challenging handling traits of the 911’s rear-engine, rear-drive configuration.

Naturally, we’re sure some will lament the loss of balancing the weight-transfers on a knife’s-edge when setting up for a corner.

There’s a fluid flow to driving fast now that really lets you maximise cornering and exit speeds, and you’re able to take a cleaner, more precise line through the corner. The GT3 RS acquits itself well on the winding road, but it always feels restrained and almost out-of-sorts from such relative ‘inactivity’, which isn’t so surprising considering the car’s natural playground is on the circuit – besides it would be irresponsible to even come close to its stratospheric grip limits on public roads.

Tackling the winding roads in the car is an intense workout that leaves you mentally and physically drained at the end of each segment, since the sensation is still that of a bonafide track-car for the road – eventually spent some 180+km later, we make our way back to Werk 1 to return the car.

We’re not usually in the habit of enjoying the pleasure that comes with the pain of physical exercise, but in this case, the post-workout euphoria lasts till we touch down in Munich.

TO READ ABOUT OUR PORSCHE 911 RS RETROSPECTIVE, CLICK HERE