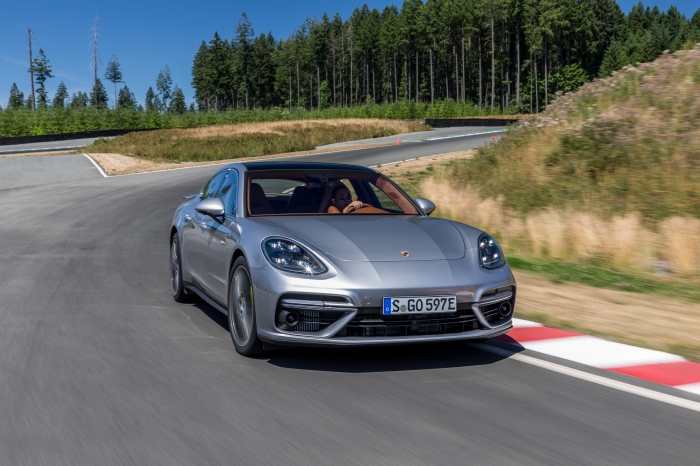 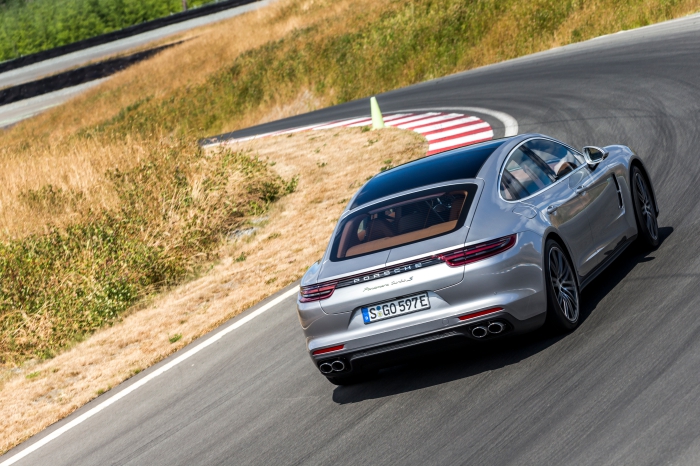 Vancouver Island Motorsport Circuit, Canada – Shortly after Porsche announced its top-of-the-line Panamera would be a hybrid Turbo S, the brand also confirmed its exit from the FIA WEC (World Endurance Championship) LMP1 division that it stamped its dominance in, and subsequent entry into the Formula E 2019/20 race season, which makes a lot of sense if you consider the brand's upcoming Mission E full-electric roadcar programme. 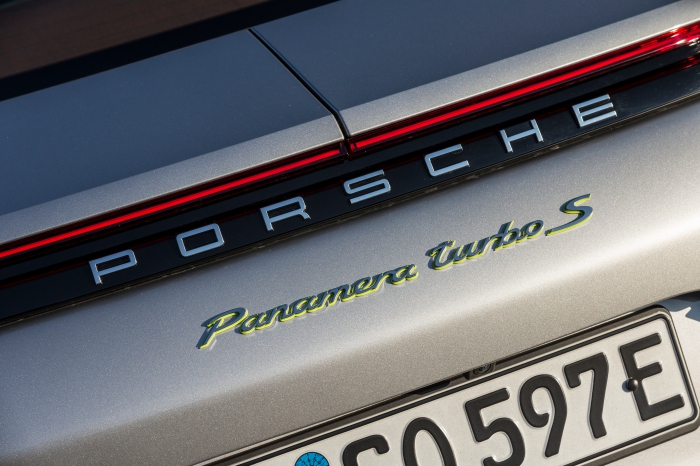 Hybrid cars provide the best of both worlds: sure, they can go ‘green’ in full-electric mode for ‘last mile’ zero-emissions motoring, but the electric motor also delivers a knee-jerk hit of pure torque from standstill (in this case 400Nm), which makes it the perfect companion to boost the performance of a conventional internal-combustion engine. 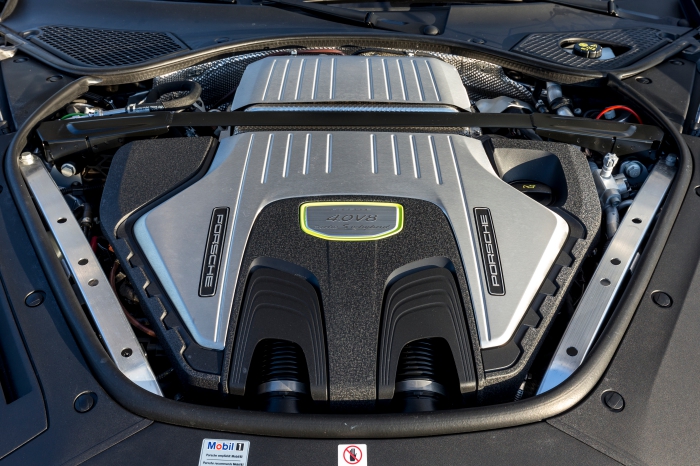 In the case of the Turbo S E-Hybrid, it’s not so much the 680bhp/850Nm combined system performance that is impressive, but also the fact that this 66g/km sports ‘limo’ returns just 2.9l/100km on the combined cycle.

In full-electric mode, it’ll travel up to a range of 50km and boast a top speed of 140km/h, more than ample for the slow trundle into the office or back home. 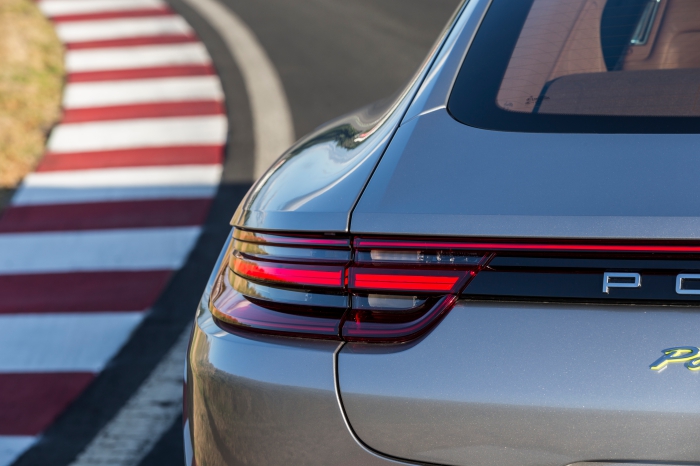 The Turbo S’s pure-electric acceleration from standstill is no pushover either, because it zips to 60km/h (Why 60km/h? Who knows?) in six seconds flat.

To put this in some perspective, BMW’s recently launched i3s, a ‘hotter’ version of the i3 EV city runabout, will zap to 100km/h from standstill in 6.9secs, but the BMW’s flyweight 2+2 weighs just 1.3-tonnes, almost half the weight of the Turbo S. The second-gen Panamera has found more fans than its predecessor, largely due to its sharp styling and more defined silhouette.

Like the 4 E-Hybrid, the Turbo S E-Hybrid boasts Acid Green highlights on the body that distinguishes it from the rest, such as the callipers and ‘e-hybrid’ script on the front flanks.

Of course, the Turbo S also gets the same funky three-piece rear spoiler as the Turbo that seems to be driving everyone nuts, but the original first-gen Panamera Turbo already had that similar set-up from before – one thing’s for sure, watching it ‘transform’ mid-motion is still quite a sight to behold. 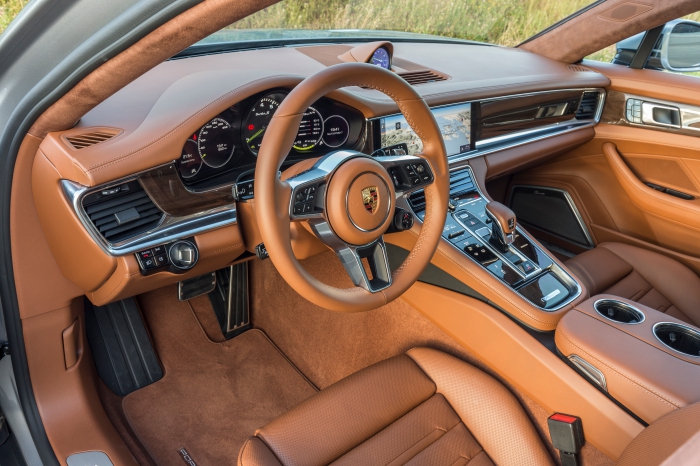 With a top speed in excess of 300km/h and a sub-3.5secs 0-100km/h time, the Turbo S E-Hybrid is definitely no slouch in the performance stakes – in terms of outright performance, it’ll hold its own against the S 63, B7 and M760Li – even if the electric hardware is identical to the Panamera 4 E-Hybrid variants.

We dabble with Launch Control, and even if the car’s explosive eruptions from standstill aren’t quite as dramatic as on the 911s, it gets the job done. 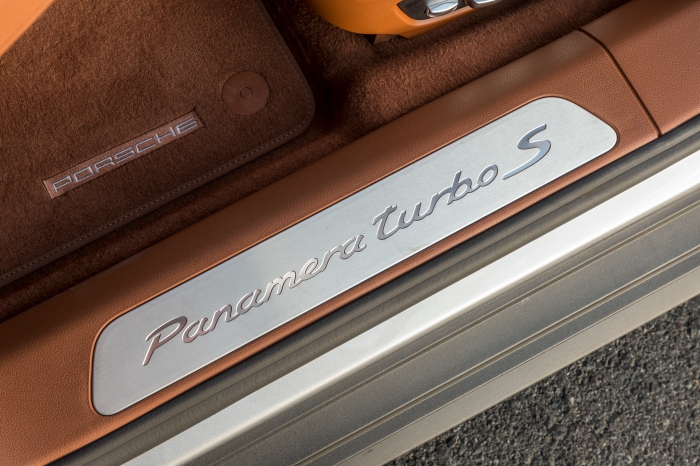 Even with the energy content of the Li-Ion battery increased to 14.1kWh from the first gen hybrid’s 9.4kWh, the battery still weighs the same, and the Turbo S E-Hybrid tips the scales at 2.3-tonnes overall – the regular Turbo weighs-in at just under two-tonnes, but is nevertheless pipped by the Turbo S in the 0-100km/h sprint by 0.2secs. 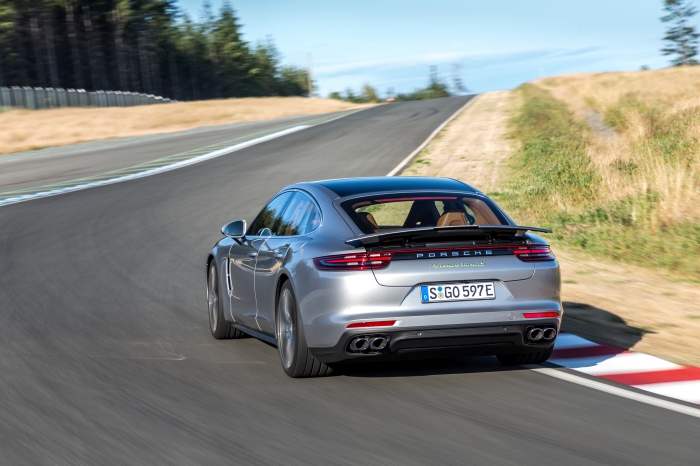 Porsche is keen to demonstrate the dynamic prowess of its performance hybrid, so we’re taken on guided laps around the tight and twisty Vancouver Island Motorsport Circuit.

After all, one of the greatest misconceptions of hybrid vehicles is that they are do-gooder eco-friendly types, but many overlook the powertrain’s propensity for brutally effective performance as well. 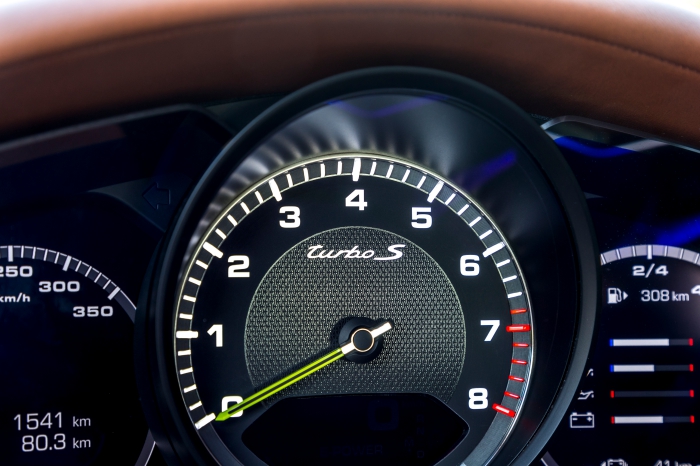 It starts-up with a chime in full-electric mode

Look at it another way: what happens when you flick a light switch? The light comes on immediately doesn’t it? Likewise, ‘no-time-at-all’ is how quickly the electricity will zap itself from motor to driven wheels on the Turbo S E-Hybrid. You do feel the weight of all that extra hardware, but there’s still a sporty bent to the car, which pretty much characterises all of Porsche’s cars.

The circuit features blind corners and elevation changes, with just a small handful of opportunities to really go flat-out, but it’s quite clear we’re intended to see how quickly the car will accelerate again following a huge shedding of speed. Ultimately, if you’re looking at the Turbo S E-Hybrid as a stupendously fast cross-country cruiser over both highway and winding roads, it’s hard to top the car’s effortless pace and fuel-sipping nature. One of the Panamera’s biggest turn-offs is the lack of a rear bench option, so seating is a strict 2+2.

With the introduction of the 4+1 Panamera Sport Turismo (which we learn will also feature a Turbo S E-Hybrid variant), there’s a chance that this may also be an option on the regular Panamera.

After all, we’re told there’s no technical reason why it isn’t possible, so we’re thinking in terms of ‘when’, rather than ‘if’, the Panamera gets this configuration in due course.

We’re not sure what the situation is in European markets, but in our parts, a 2+2 is a clear limitation for potential buyers, and let’s face it, the Sport Turismo appeals to such a niche audience that it would be a shame not to introduce its 4+1 on the regular Panamera. 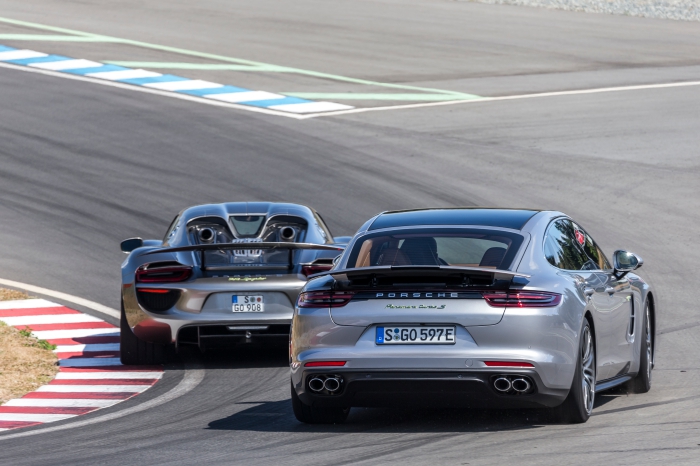 The cabin features the same posh chic as the other second-gen Panameras, but the Turbo S gets hybrid specific controls, including Acid Green instrument needles and ‘Turbo S’ logo.

Like the first-gen Panamera e-Hybrid, a whole suite of hybrid-specific functions on the Turbo S can be controlled via the Porsche Connect app, so there’s even more of a reason to be fiddling around with your smartphone when you’re out and about.

Apart from appraising the driver as to the battery and charging status, it’ll also let you speed- and geo-fence the car (checks on defined speed and geographical boundaries), in the event someone else is driving the car. 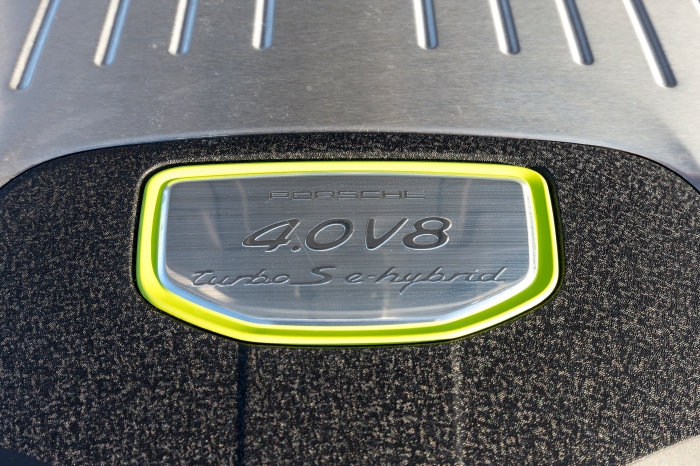 It’s no longer true that ultra-high performance cars give the finger to the environment.

The electric boost to the top-shelf Panamera Turbo S won’t just shock the grizzly eco-warriors, but also any sportscar you might come across.