Lamborghini has enjoyed a bumper few years off the back of tasteless people wanting to drive very fast trucks, but its sports car game has been weak for a long time. The ancient Aventador has a yearly appointment with a blind cosmetic surgeon and the Huracán apparently exists to remind everyone how good the Audi R8 is. There’s the odd special to keep tasteless people with even more money happy, but not much to remind us what the company used to be capable of. Photographs of the new Huracán STO – yes, the font does read STD to some of us – suggested more of the same. Silly styling and peacock ambitions.

It takes about three minutes to realise that the STO is the best car Lamborghini has produced since the Murciélago LP640. It is everything a car wearing that badge should be – fast, challenging, mostly absurd – but also totally engaging as a driving experience. That last bit is the part of the supercar recipe that’s been missing in a Lambo for many years. Rediscovering it makes me smile.

The STO is lighter, harder, meaner than the standard car. Of course it is – that’s the standard recipe now; take an already monstrously fast car and make it even faster. Now just about all the big guns are doing this competently these days, but it’s a rare treat to come across a very fast car that goes to the gymnasium and emerges so much better.

Having an atmospheric V10 is a huge help. It doesn’t matter how clever the turbocharger becomes, it will never be able to exist as such a powerful foundation to the core of a great driving experience. These cars should exist to make us zing and grin. Touch the throttle pedal and the rev counter pings northwards, the car shakes and shimmies.

The steering is superb too – fast, connected and incisive. The car is noisy and harsh, the suspension so stiff it jostles even on a racetrack – but all of this could have been said about the last five ‘special’ Lambos. Where they immediately fall apart is the moment they understeer through the first corner.

Not this one. Turn the car and it holds the line with no hint of a push – and then comes the bit that makes you laugh out loud. With the traction control on and in Corsa mode, the rear will just begin to arc around and then the electronic drift brain will hold the car and make the driver feel like a hero. 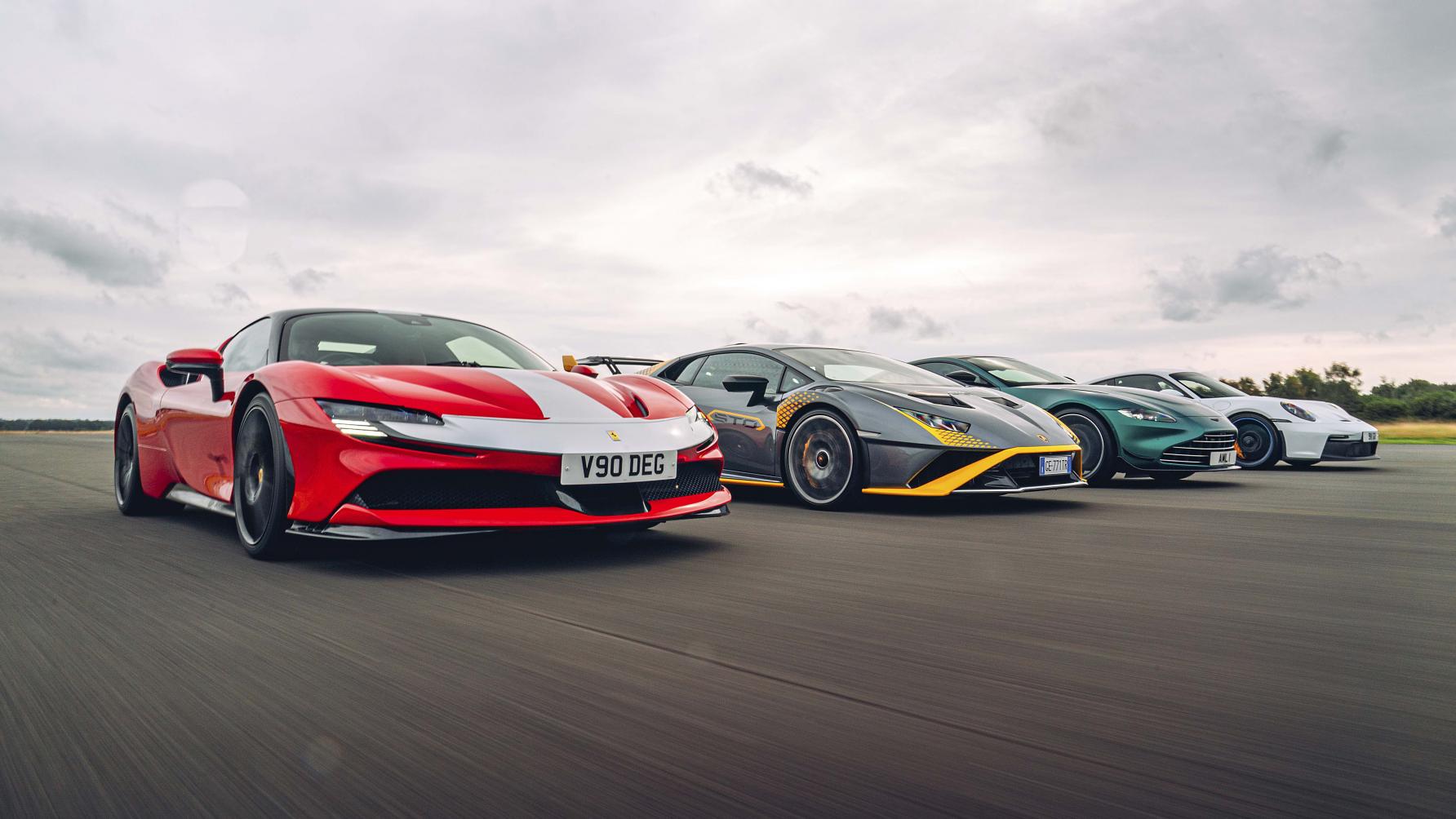 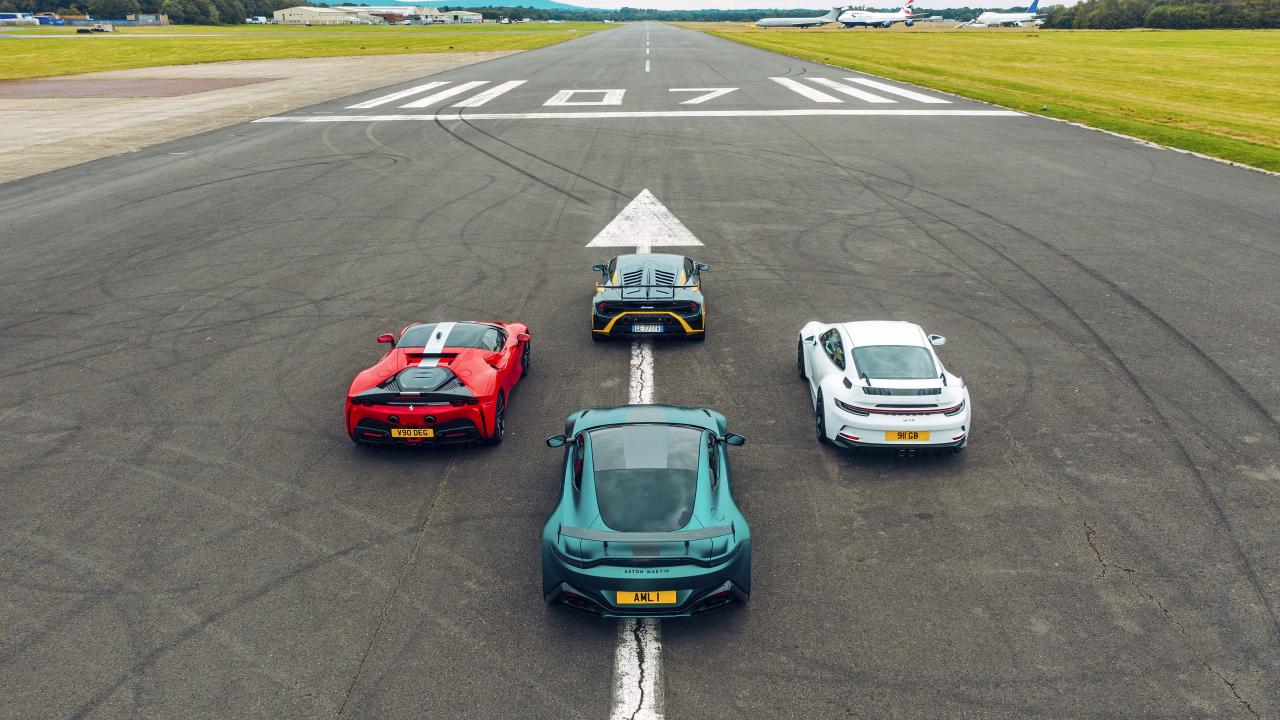 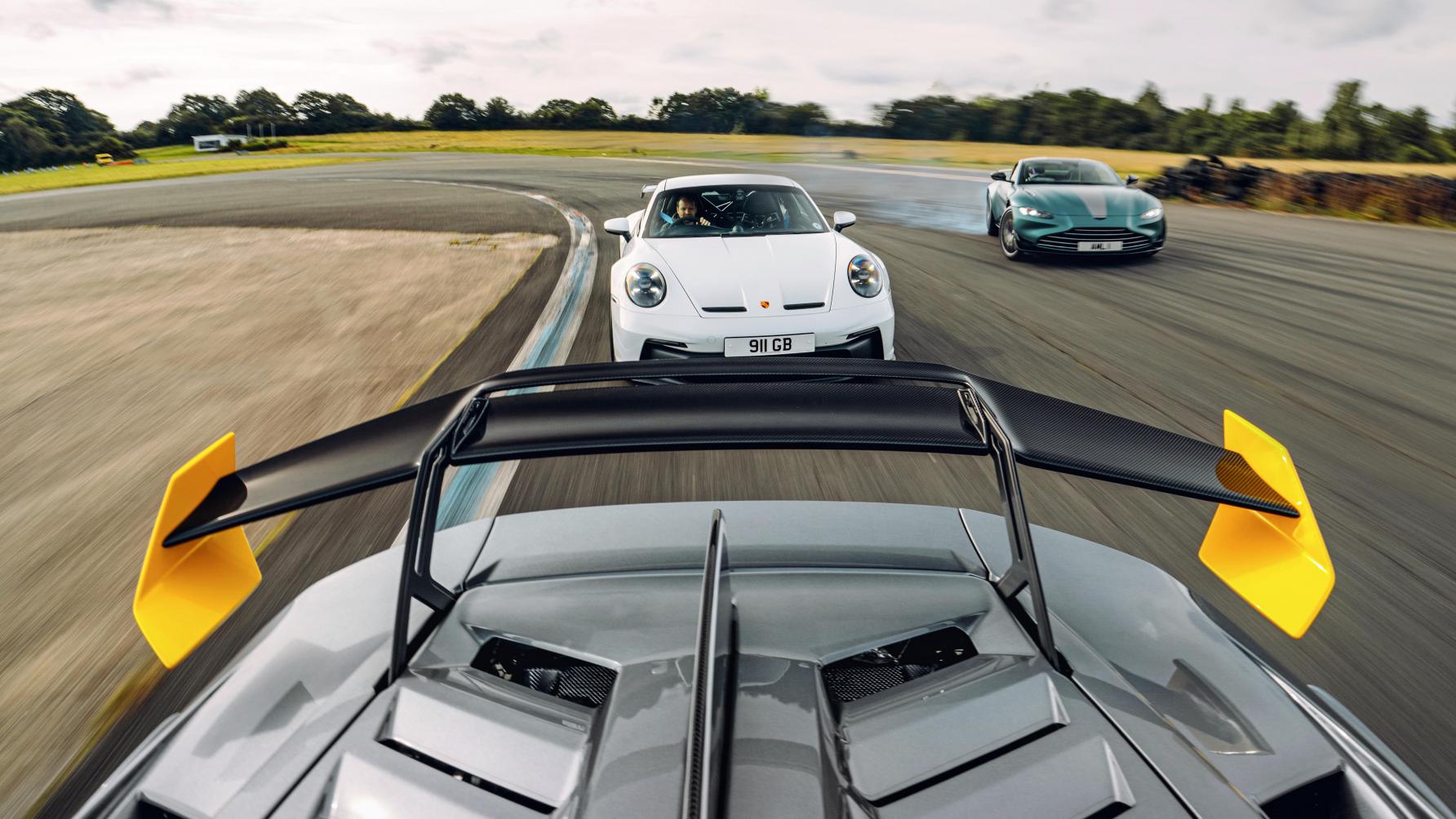 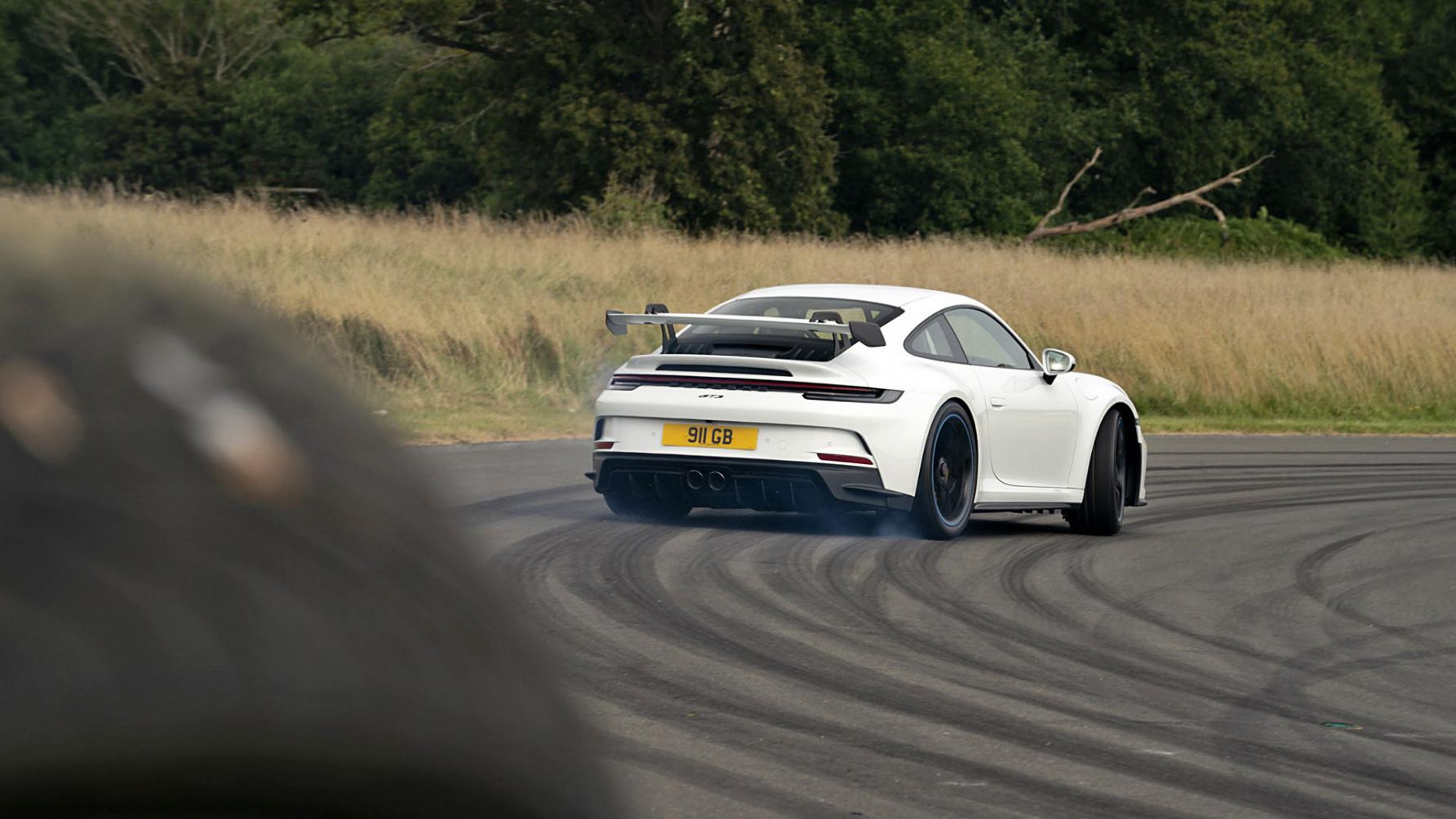 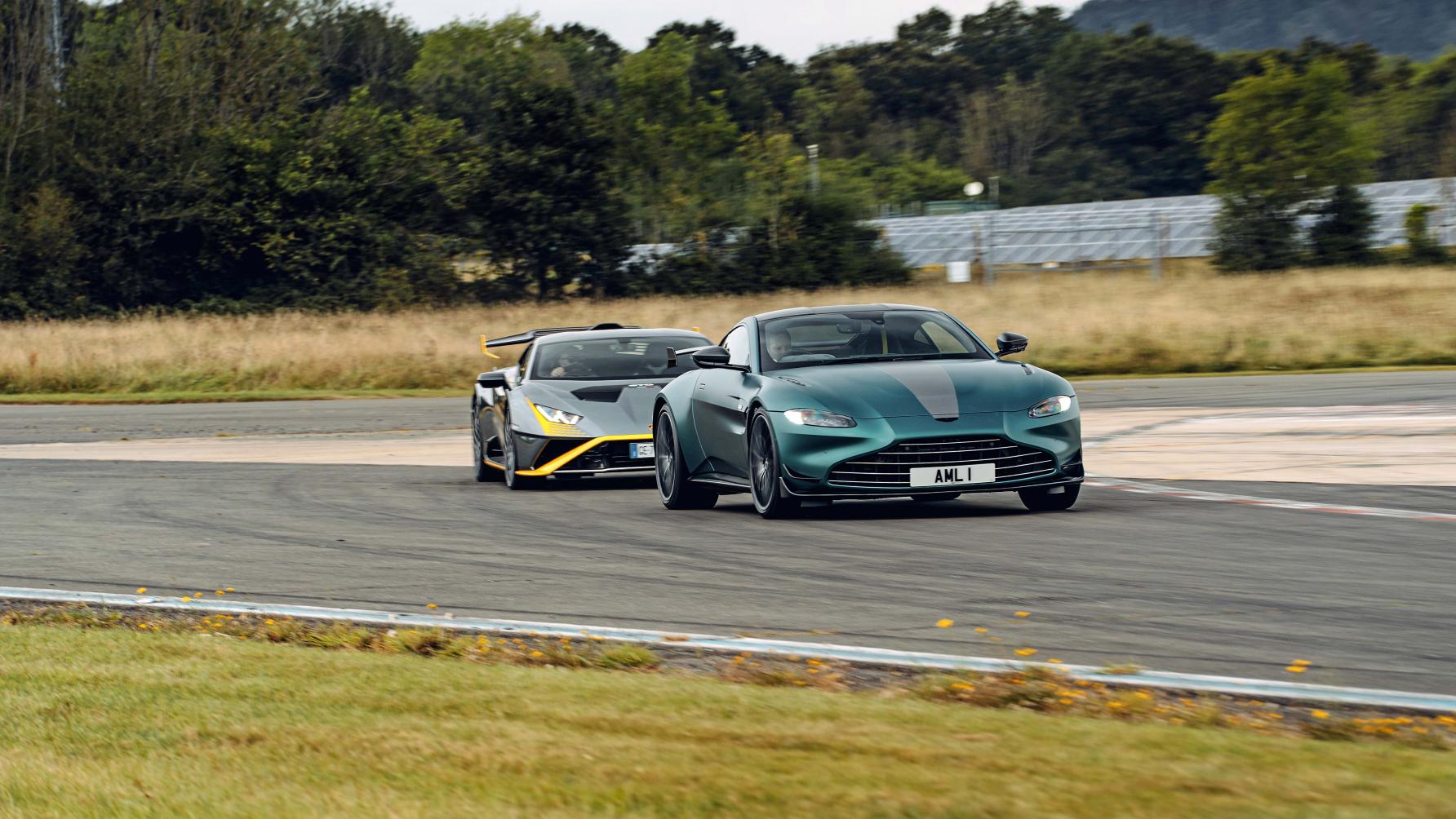 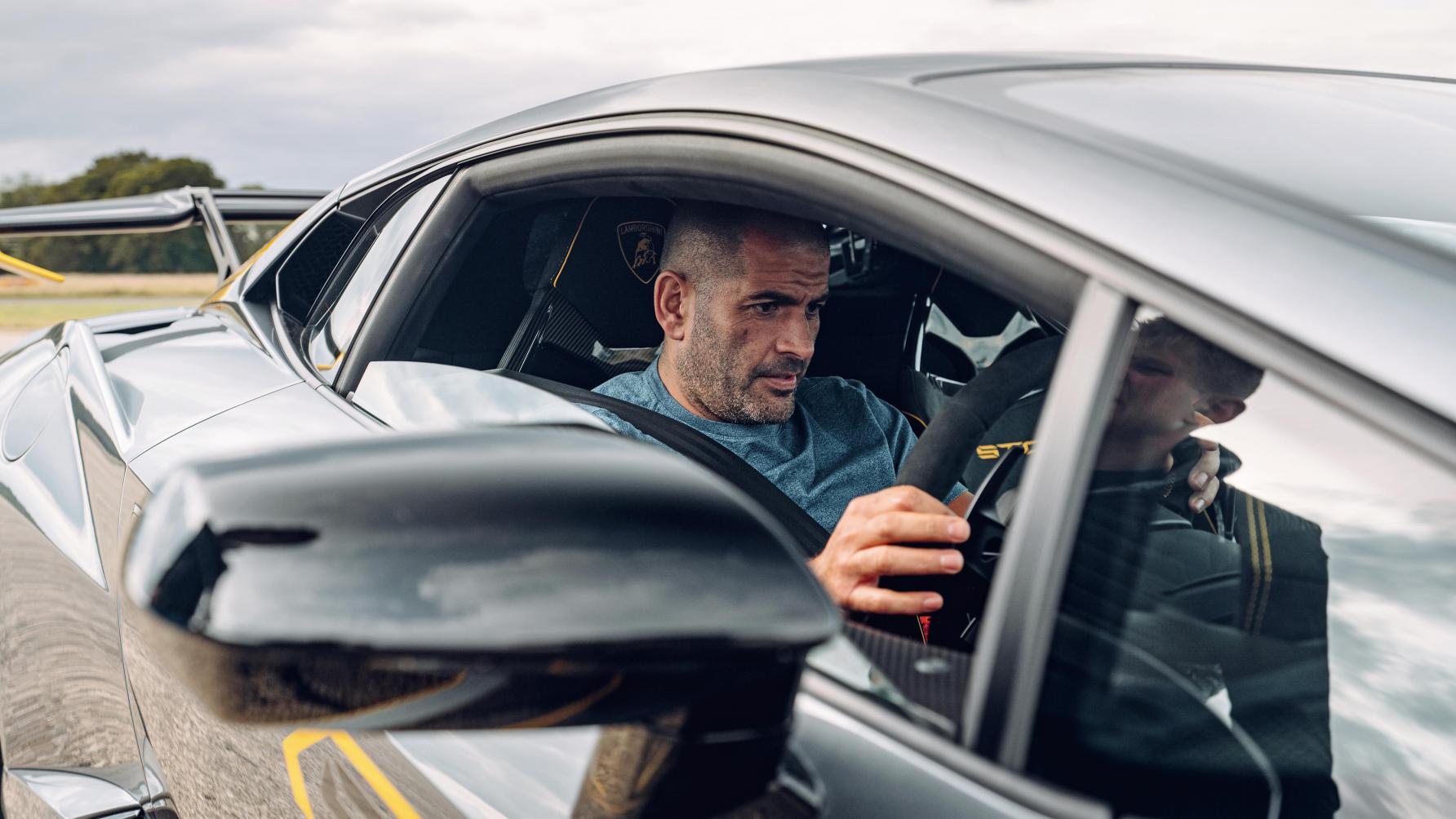 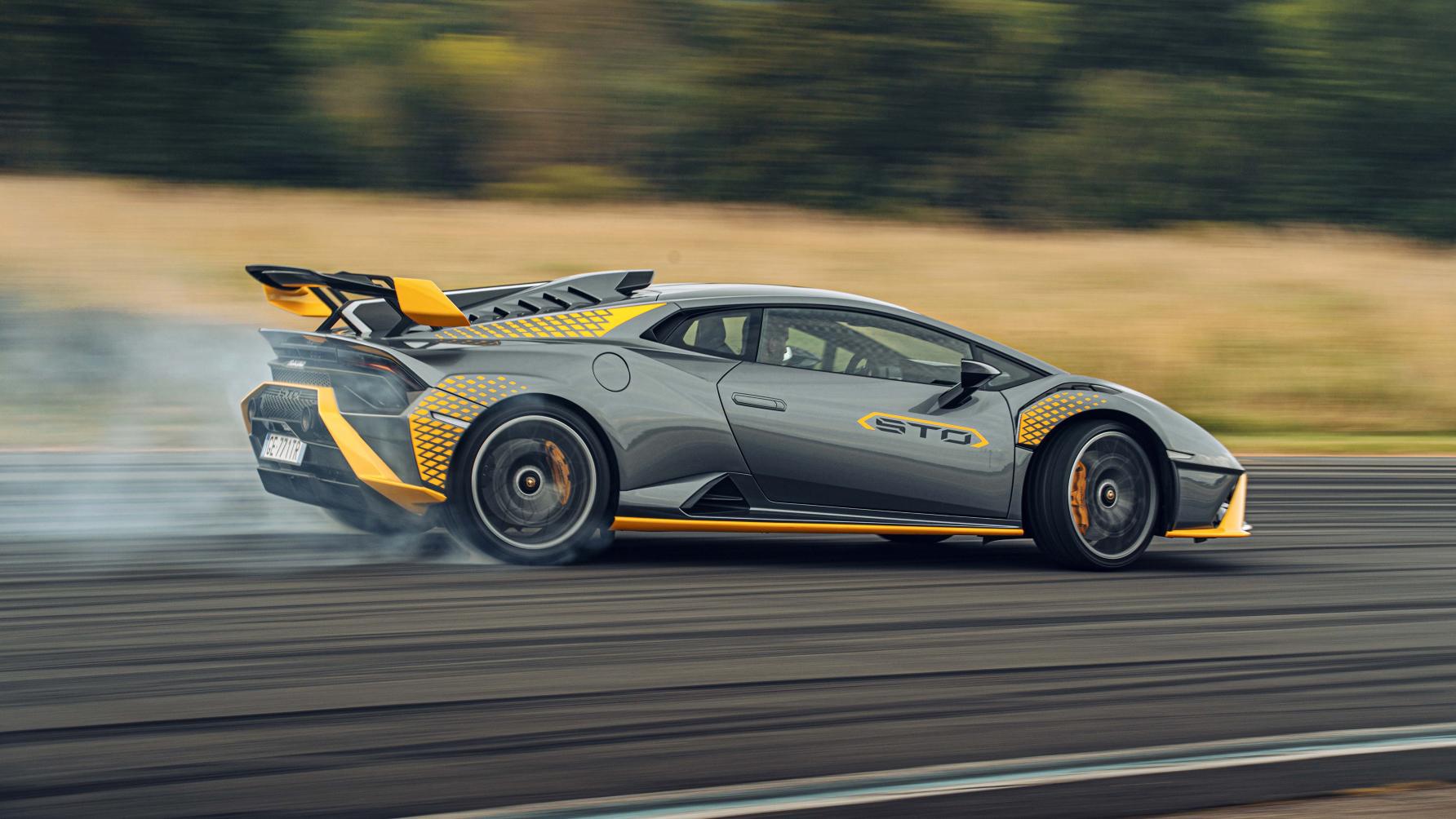 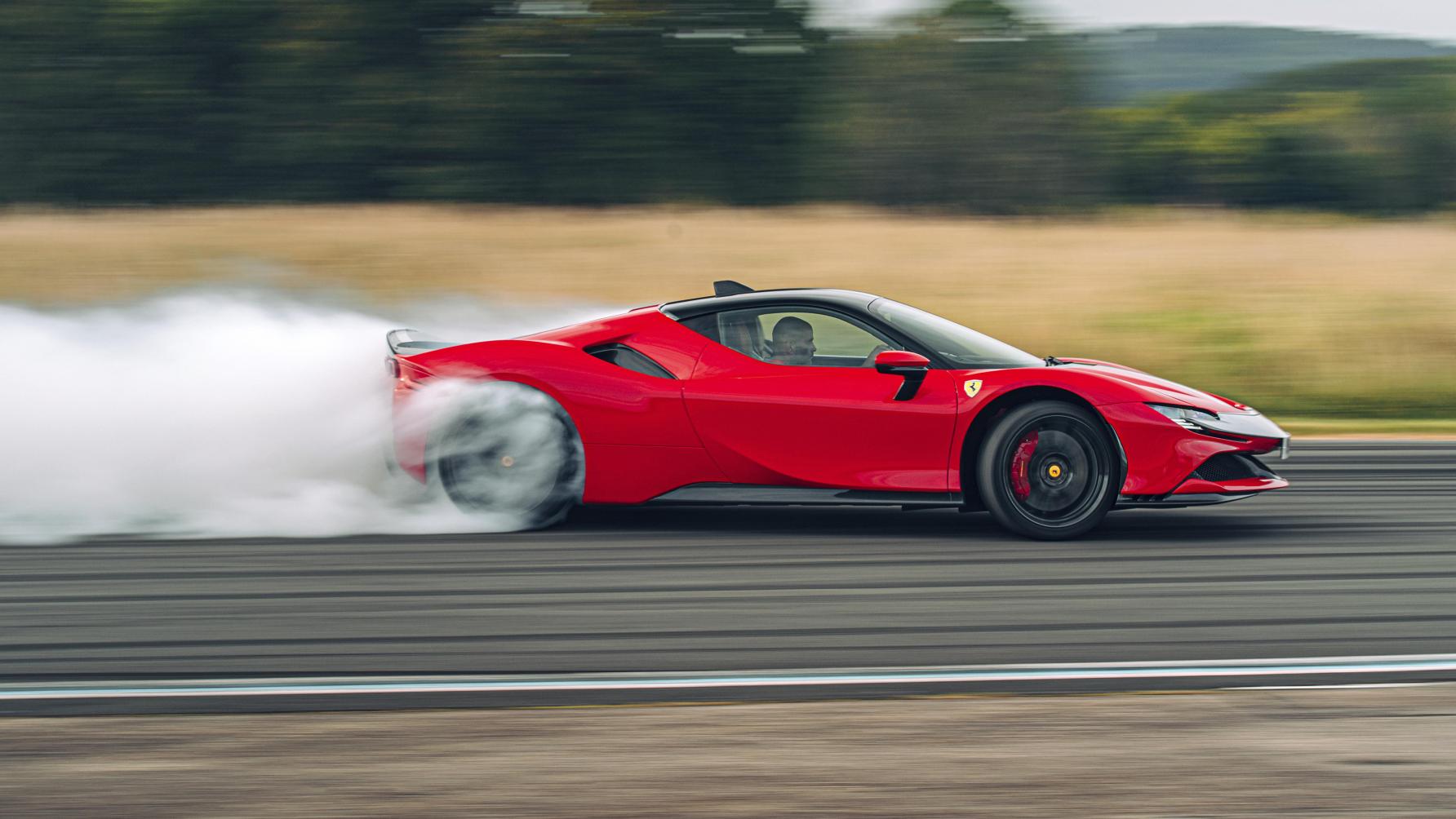 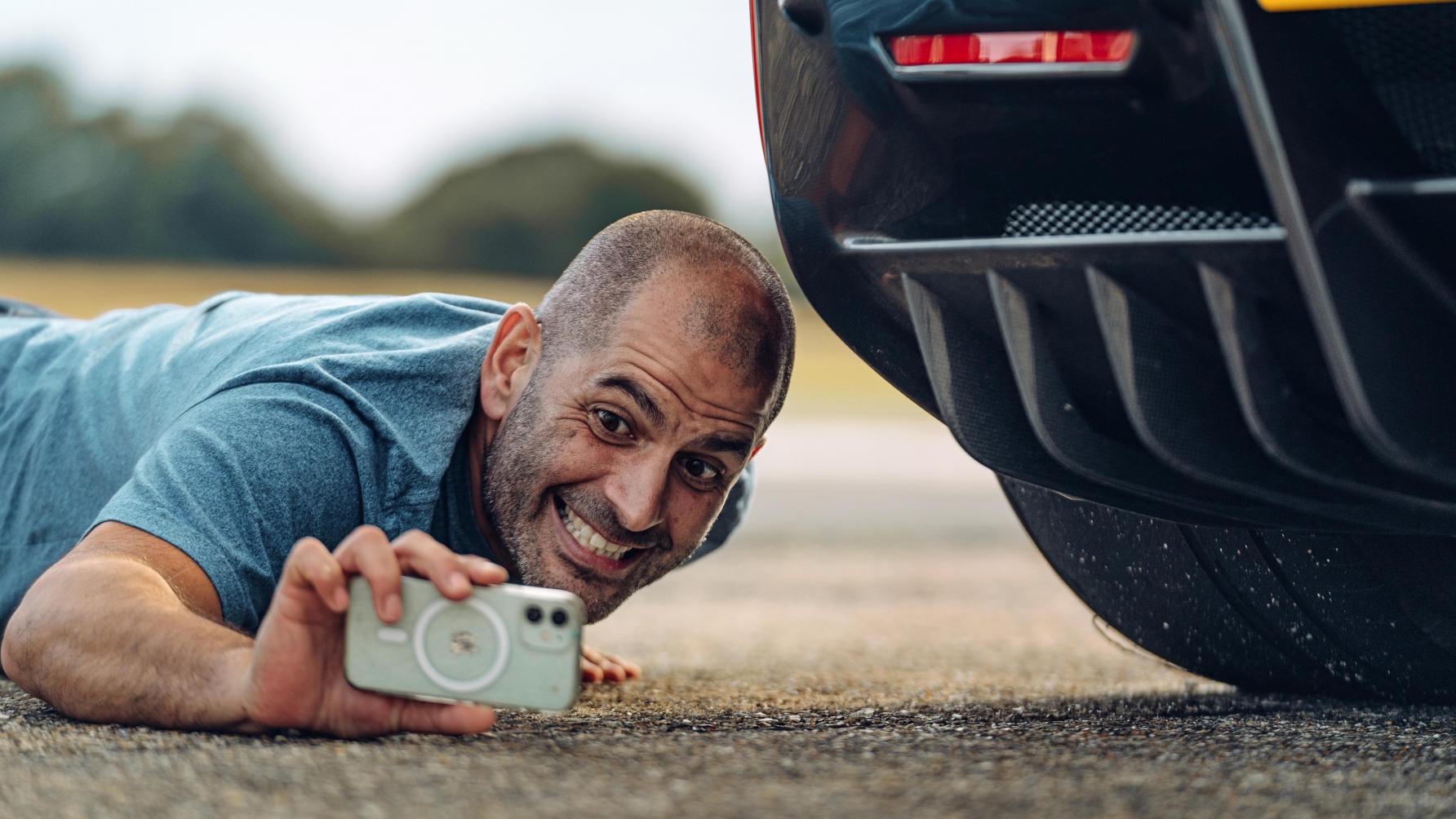 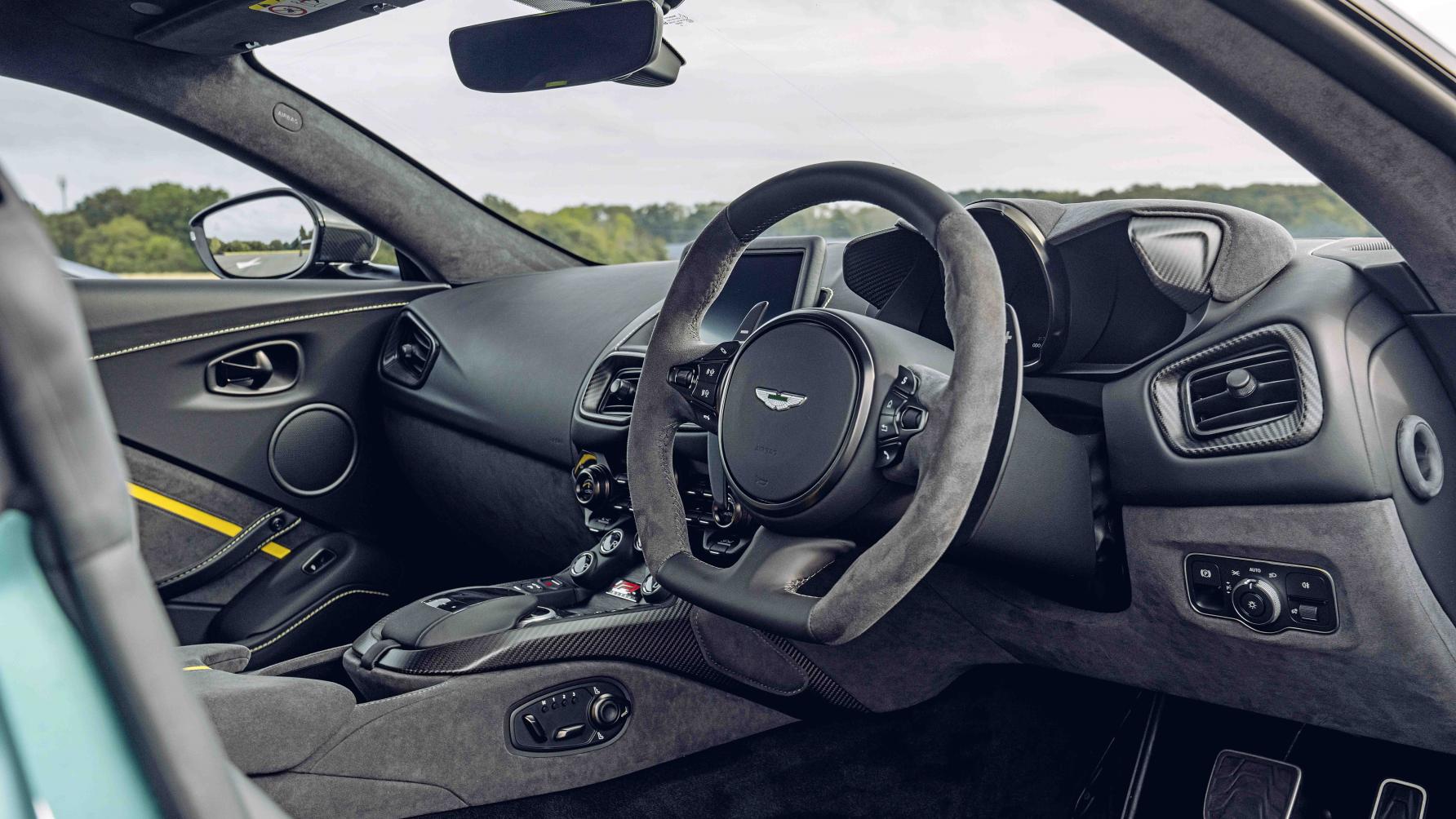 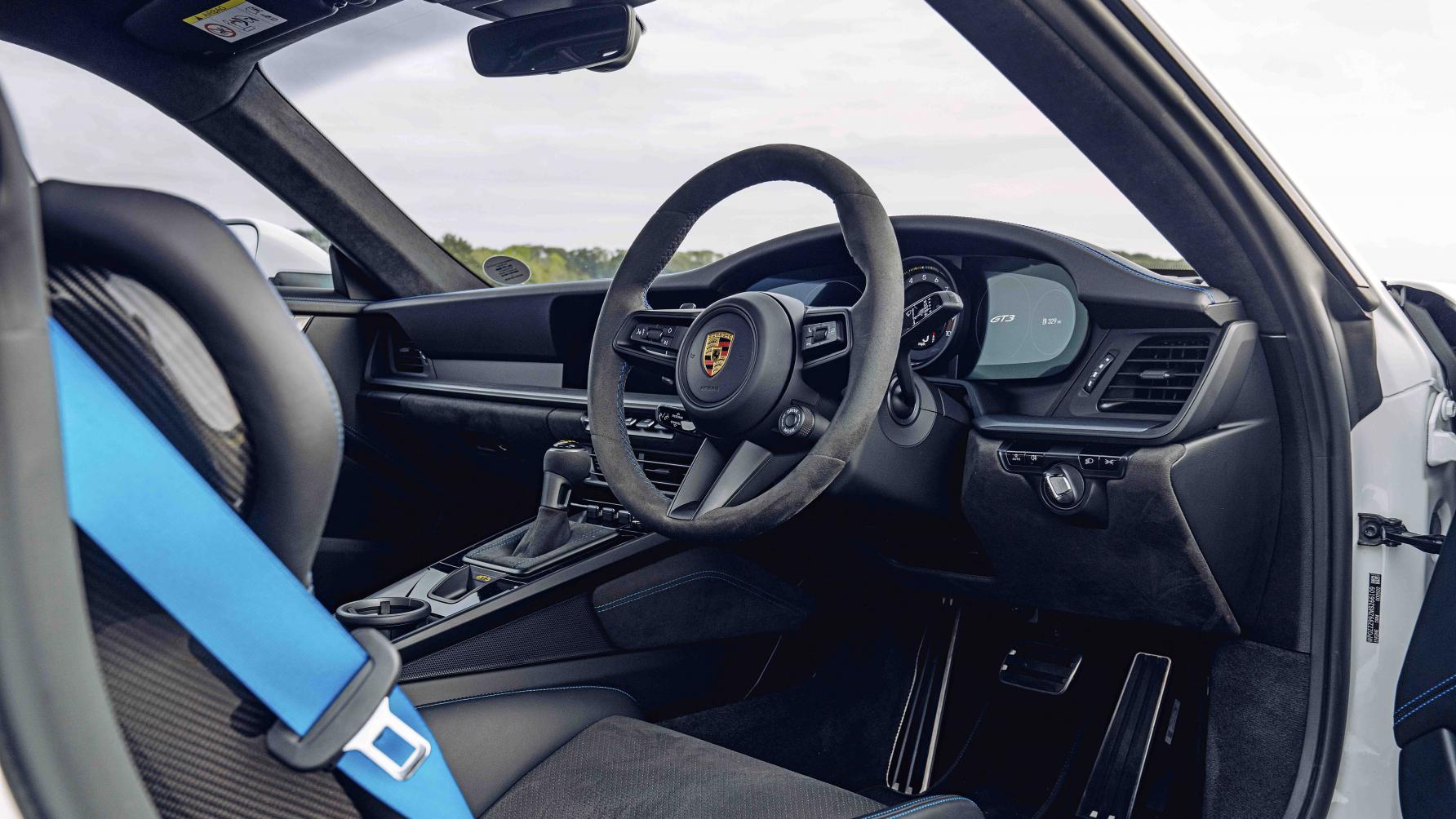 Why is this special? Because previously, when Lamborghini removed the front-driven aspect of its cars they felt very odd and were way too spiky at the limit. They felt unfinished, unresolved. The STO feels like it was always meant to be 2WD. Switch all the systems off and it’s a pussycat, far easier to slide than the other three – and the brakes are superb, and the gearbox actually suits the engine so I can’t complain about the lack of a gearlever. Of course the seat is terrible, but then it is still a Huracán.

Coffee grounds are often used to clear the nose between trying perfumes. A palette cleanser in order to keep the olfactory senses uncluttered – maybe I should have drunk a coffee before driving the SF90. The thing is so fast, so competent, and the whole event seems so detached from the driver that the worst thing you can do is jump from the pantomime Lambo straight into its weird world of performance.

The SF doesn’t so much feel like the fastest car here as play a speeded up version of the scenery through its windscreen and side window. Hell, it’s so advanced you wonder if that really is the real world on the other side of that screen, or some augmented reality projected back in VR.

The SF90, this one complete with £40,000 of Assetto Fiorano pack and enough extras to push the price beyond half a million pounds, is one of the fastest cars I have ever driven. Sustained acceleration from the combined twin-turbo V8 and electric motors is frankly disconcerting. It’s bizarre to think that anyone who holds one of these things wide open for more than three seconds in the UK will be breaking the law. Three seconds – talk about a brief window.

And therein lies the problem with the SF90 – its main trick is speed, and speed alone in a world where you can’t really use it becomes a frustration. The steering is crazy fast and offers very little in the way of connection, and the noise is pretty ordinary after you’ve been in the Lambo.

And the chassis is almost too clever for its own good. For traction and ride comfort it’s by far the best in this group, but the way the car decides how it’s going to spread the power between the front and rear axles is confusing. Sometimes it behaves like a pure RWD machine, sometimes it dishes out a dose of lovely four-wheel drift in the Nissan GT-R style, and sometimes the front axle chimes in with so much torque that the thing understeers. You never quite know what you’re going to get next. In the world of Haribo, this can be tantalising, in a near 1,000 horsepower Ferrari it’s more like having a placid mate who gets punchy after a few beers. You never know when it’s going to kick off. It’s a masterful piece of engineering the SF90 – staggering in what it can do and technically it’s the ‘best’ car here. But I’m not sure I’m interested in best anymore – this era of motoring is coming to a close and I want to be entertained. And I like having some space for an overnight bag – another thing that the SF90 struggles to deliver.

You’ll have seen plenty of this green Aston Martin this year because it’s the car all Formula One drivers hate the most – the safety car. After two decades of uninterrupted AMGs annoying young racing snakes because they can’t go fast enough, Mr Stroll has persuaded F1 to use one of his cars. As marketing coups go, it’s a clever move. The car? Hmm, I don’t quite get all of it.

The bits I do get are the fantastic chassis and steering – Aston is very good at this stuff and managing to have a car perform so well on a track and yet remain totally usable and comfortable on the road is not an easy thing to achieve. And the powertrain is pretty good, but also pretty ordinary in this company. It’s the only car here to use a torque converter automatic gearbox and that does leave it at quite a disadvantage on the track because every shift feels a little slurred.

And here’s the problem for the Aston: it’s not just that it feels outgunned in this company – it should by the Lambo and Ferrari, they’re much more expensive – it’s that the F1 edition doesn’t feel that different from the standard car. It’s a little faster and crisper and whatnot, but compared with the STO and GT3 transformations, it’s very mild. And the people that buy this stuff want to feel like they’re in something that’s way removed from the base car.

And then there’s the rear wing. It’s a part of a package that allegedly brings another 200kg of downforce, which you can feel in high speed stuff – but just look at it? It’s so apologetic and for me totally ruins the lines of a very good looking car. For me wings are like beers, if you’re going to do it at all, do it properly and fill yer boots. And as someone who mocked the fish lips styling of the Vantage, I now feel guilty because the ‘normal’ Aston grille doesn’t work for me and I find myself looking at the original and thinking it looks great. All up, it looks a bit like a tuner car, not a factory machine.

But it’s fast, entertaining, very capable, and, despite the odd looks you can make a case for it until you realise Aston wants more for it than Porsche wants for a GT3. At which point you go “nah – that’s just silly”.

The GT3 is probably the slowest car here – crazy to think the Ferrari has double the power of a car that will hit nearly 200mph. Some people think the 992 GT3 is too harsh on the road, but I’m not one of them. It’s a GT3, the last one was no limo, so just crack on.

This is Porsche’s strongest subject, so it’s unsurprising that the car is very, very good. Its chassis sits much more in the STO camp – it’s less neutral than the Lambo, tending to push or oversteer in greater quantities and it’s less thrilling, less of an assault on the senses. But the steering is superb and the motor howls all the way to 9,000rpm – in fact the nat-asp flat-six is so special, it almost justifies the cost of the car.

And once you’ve acknowledged just how gifted the GT3 is, how much more involving it is over a ‘normal’ 911 and yet how little discomfort tax it adds to be so much fun, you can’t quite understand why it only costs about the same as a highly specced Carrera GTS. Yet it’s a seven-eighths racecar for the road.

Can I choose one? Not really – they’re too different. The Aston is the one that fails to hit its intended brief by the widest margin, and yet by any yardstick, it’s a cracking thing to drive. As you can probably tell, I still find the SF90 perplexing because I think it’s a brilliant execution of the wrong type of sports car. The Lambo is a riot and the best to come from that part of Italy in many years. And the GT3 is the one you’d spend your own money on.