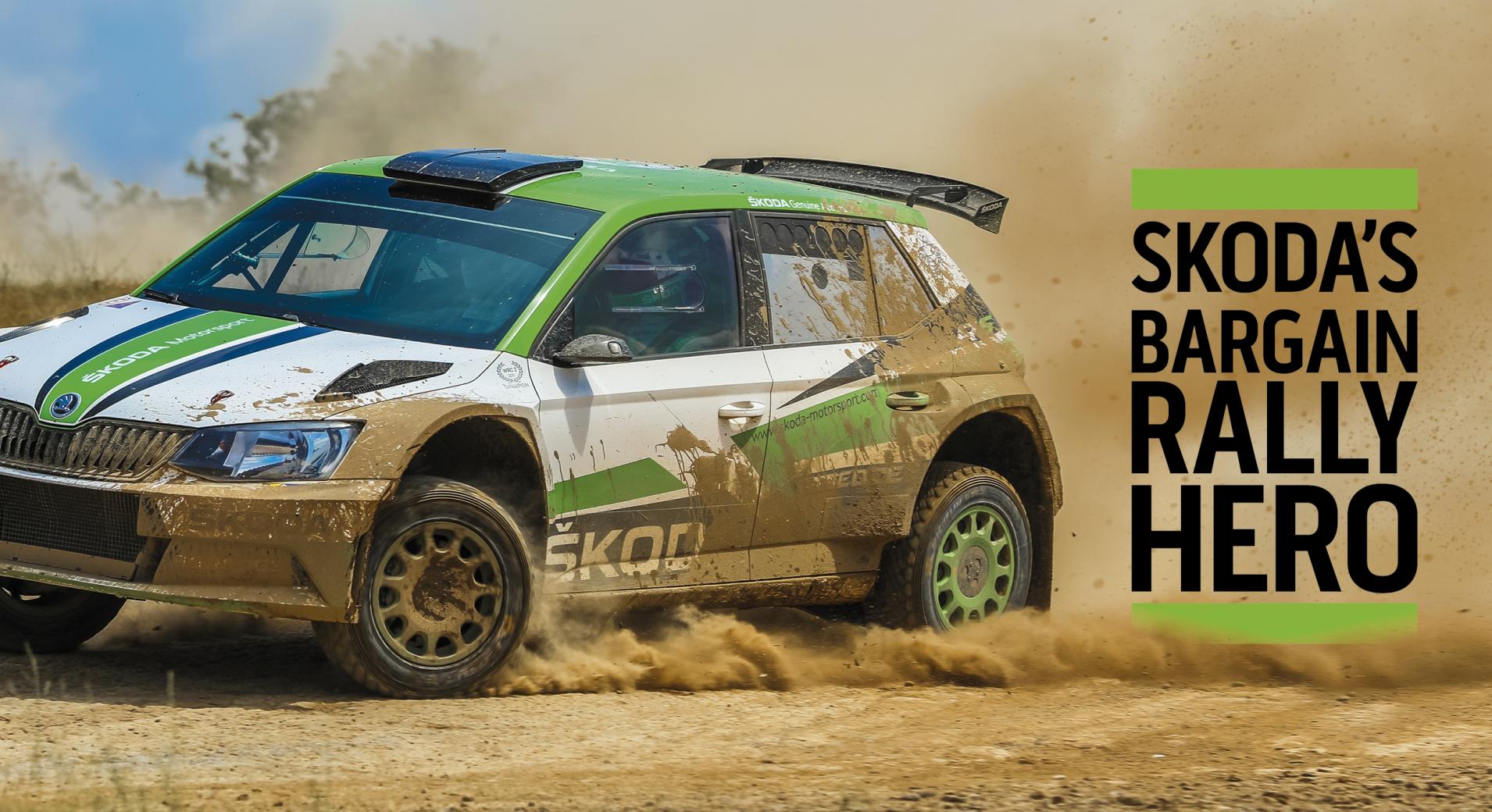 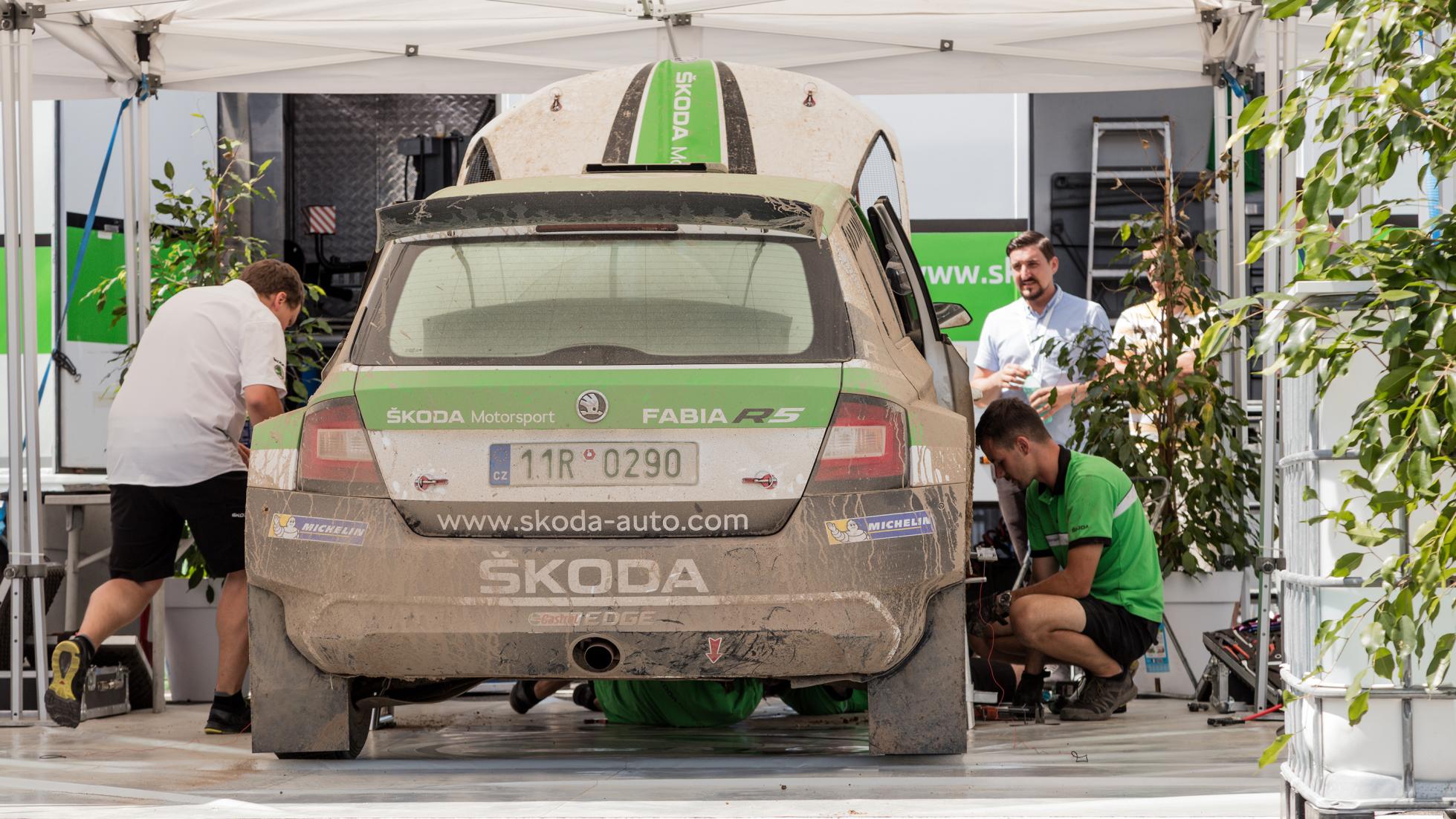 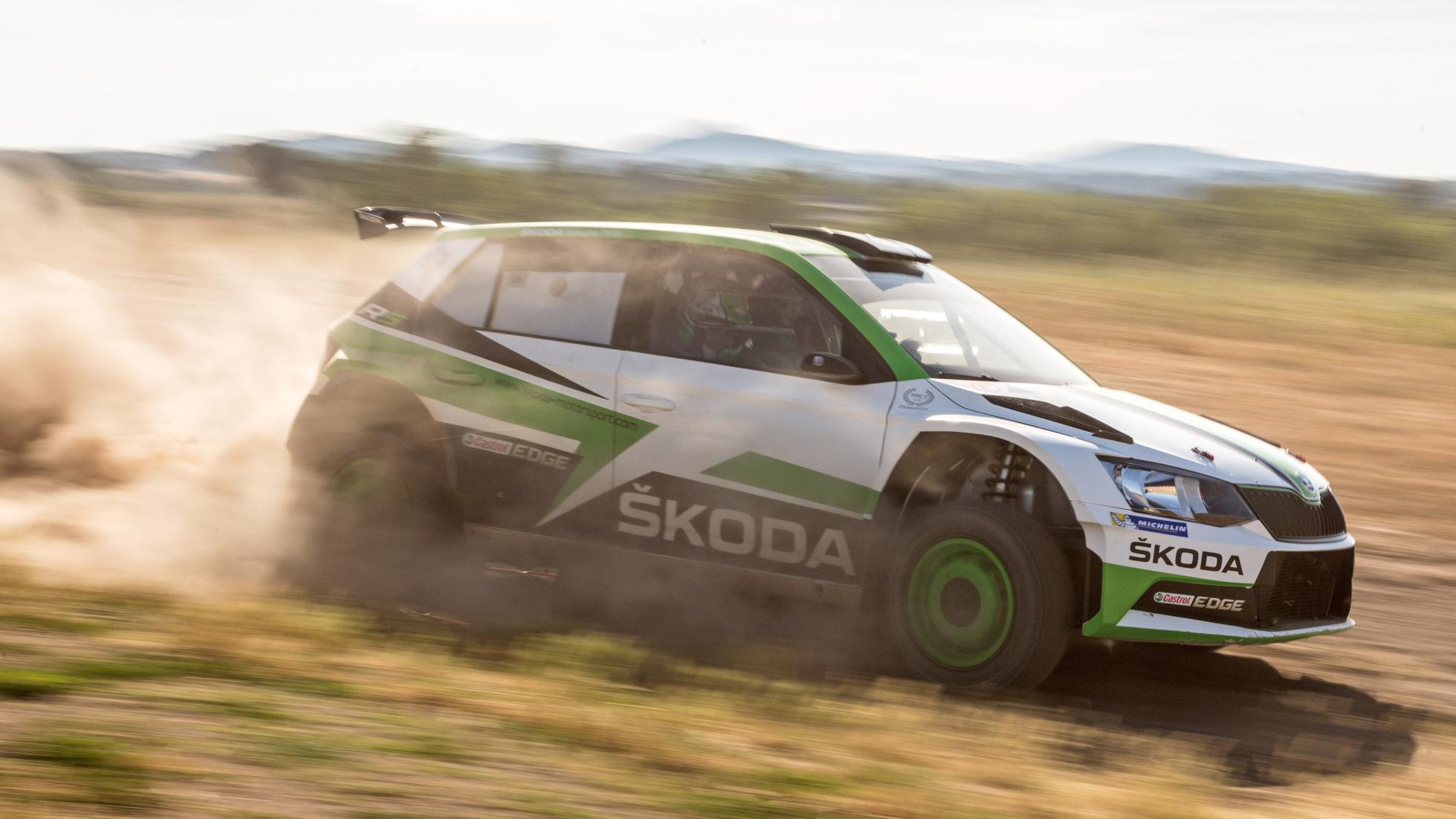 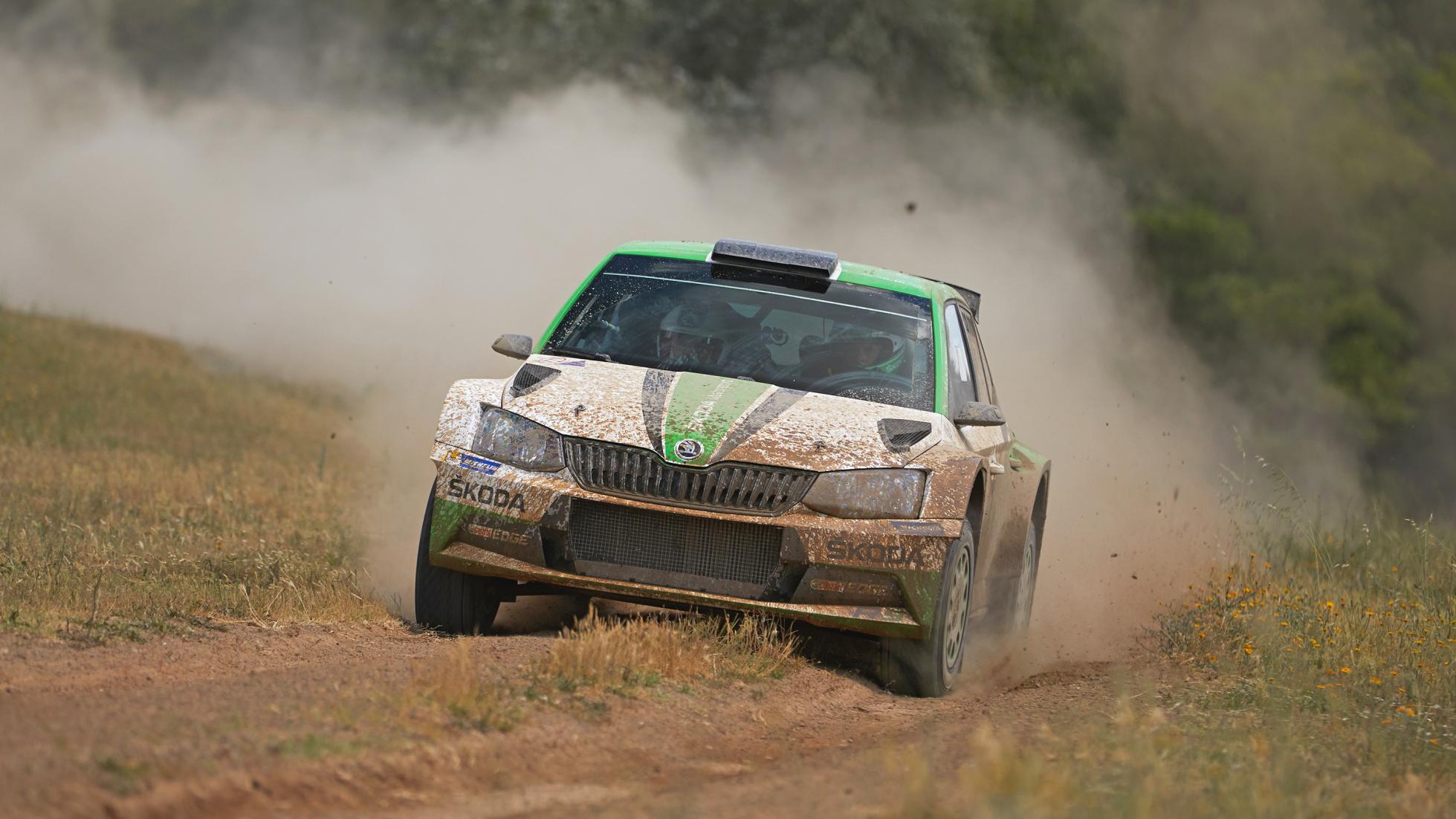 The World Rally Championship has seen a revolution in 2017. New rules have upped power and aero considerably, giving us some very potent top-class cars and five different winners from seven rallies. There’s not been drama like it for years.

But once the WRC-spec cars have blasted past you, throwing gravel, mud or snow all over your latest anorak and bobble hat combo, there’s reason to hang around. Because the next class down – WRC2 – is hardly short of excitement, and the cars aren’t smothered by the shadow of WRC.

That’s because the cars are very close to old WRC regulations. Cars like the Skoda Fabia R5, an example of which has taken victory at every WRC round so far, with three different drivers proving victorious.

And it’s a superb looking car. The standard Fabia is smart enough, but very much camouflages itself into its surroundings. It’s not terribly exciting. The rally car, you’ll surmise, can’t be accused of the same.

Anyone who pines for rallying’s Group B chaos will look straight to one area when assessing aesthetics of a modern rally car: the wheel arches. In this regard, the Fabia can be considered an immediate success.

There’s more than a whiff of Lancia Delta Integrale about their boxy proportions (seriously), while their cut out is pure Lamborghini Countach. Honestly, Google it.

Form follows function, mind, and the R5 class comes with some strict regulations. As well as keeping the class competitive, and drivers as closely bunched up in the timing sheets as possible, the rules aim to make the cars affordable. Because as well as campaigning its own Fabias, Skoda wants you to buy one then rally it yourself.

Okay, its 180,000-euro starting price isn’t a ‘bargain’ in the traditional sense. It’s a slight step up on a Fabia 1.0 TSI SE. But the price is prescribed by the FIA (the sport’s governing body) and when it buys you a ticket to chase the WRC and its wonderful stages, it’s not half bad. Skoda has sold around 150 since the R5’s introduction in 2015.

And the real focus on affordability comes underneath, from the parts and materials that are used. Something engineer Jakub Jares explained as he talked us around some brilliantly geeky cutaways of the car. 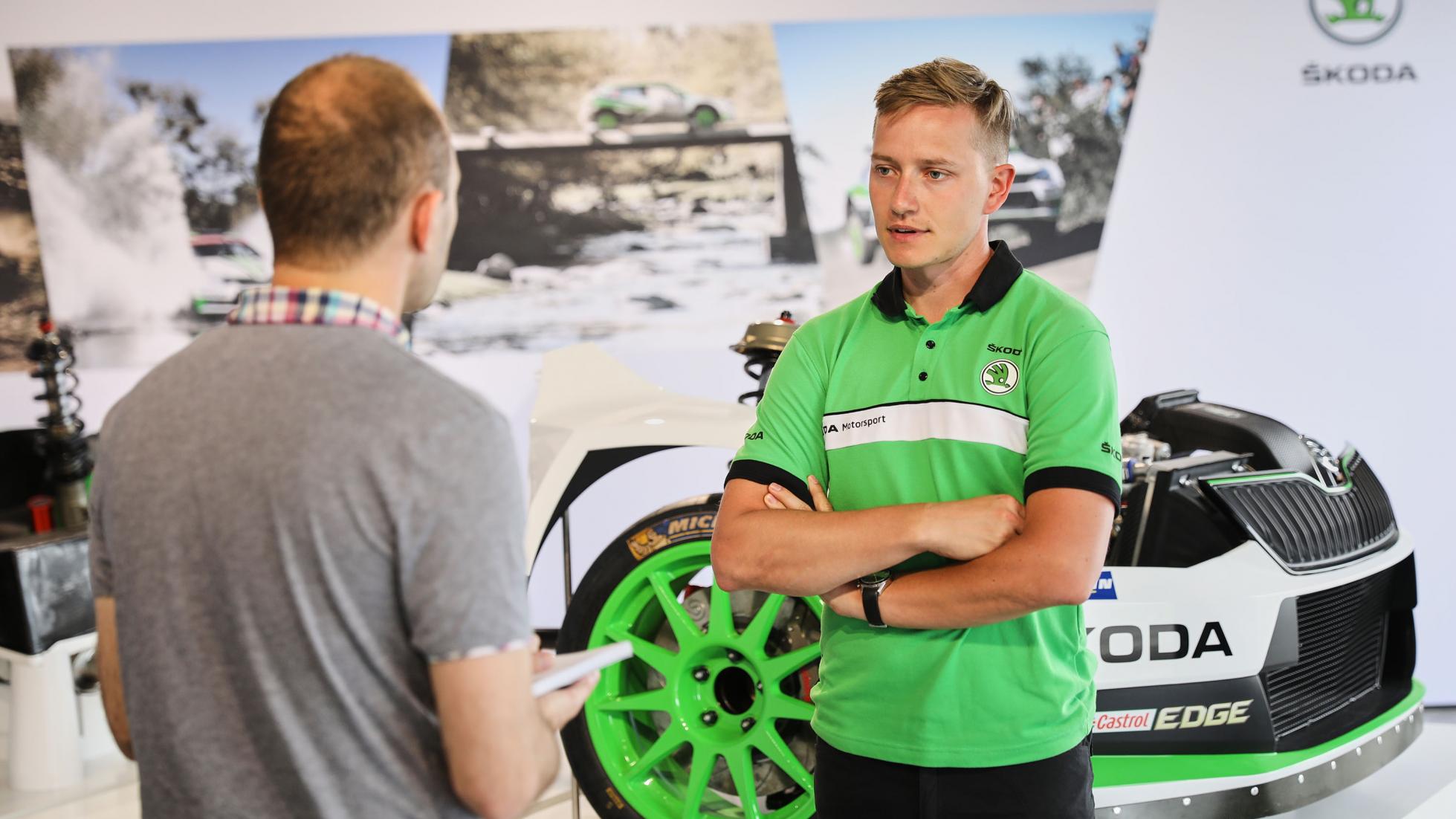 “In WRC you have much more possibility with the materials you use,” he tells us. “Here, because it’s a customer programme, we’re pushing the cost down. So we are unable to use titanium in this category and for a lot of parts you can’t use carbon. There is some carbon, just not much. The bracket for the fan is carbon, but inside it’s the serial production fan…”

The alternator, meanwhile, comes from a VW Tiguan. Maintaining the car should be as easy as possible, in terms of cost and requisite mechanical know-how. So where possible, components come from the big VW group parts cupboard.

“Inside is like a puzzle,” Jakub continues. “We try to find the best solution in serial production from the VW group, because for sure we can buy these parts for a good price. We are in contact with serial production and they try to help us choose. We tell them what we need, what size and strength a part needs to be, and they will narrow down the parts rather than us search through 50 or 60 parts from all the different models.”

The biggest parts – the engine and gearbox – are fixed, though. R5 rules demand a turbocharged petrol engine of 1.6 litres, something the VW group doesn’t currently put in production cars. So Skoda Motorsport sourced the 1.8-litre TFSI used in a variety of cars – recently seen in the Skoda Yeti and Octavia, among others – and used a different stroke and crankshaft to get it down enough in size. 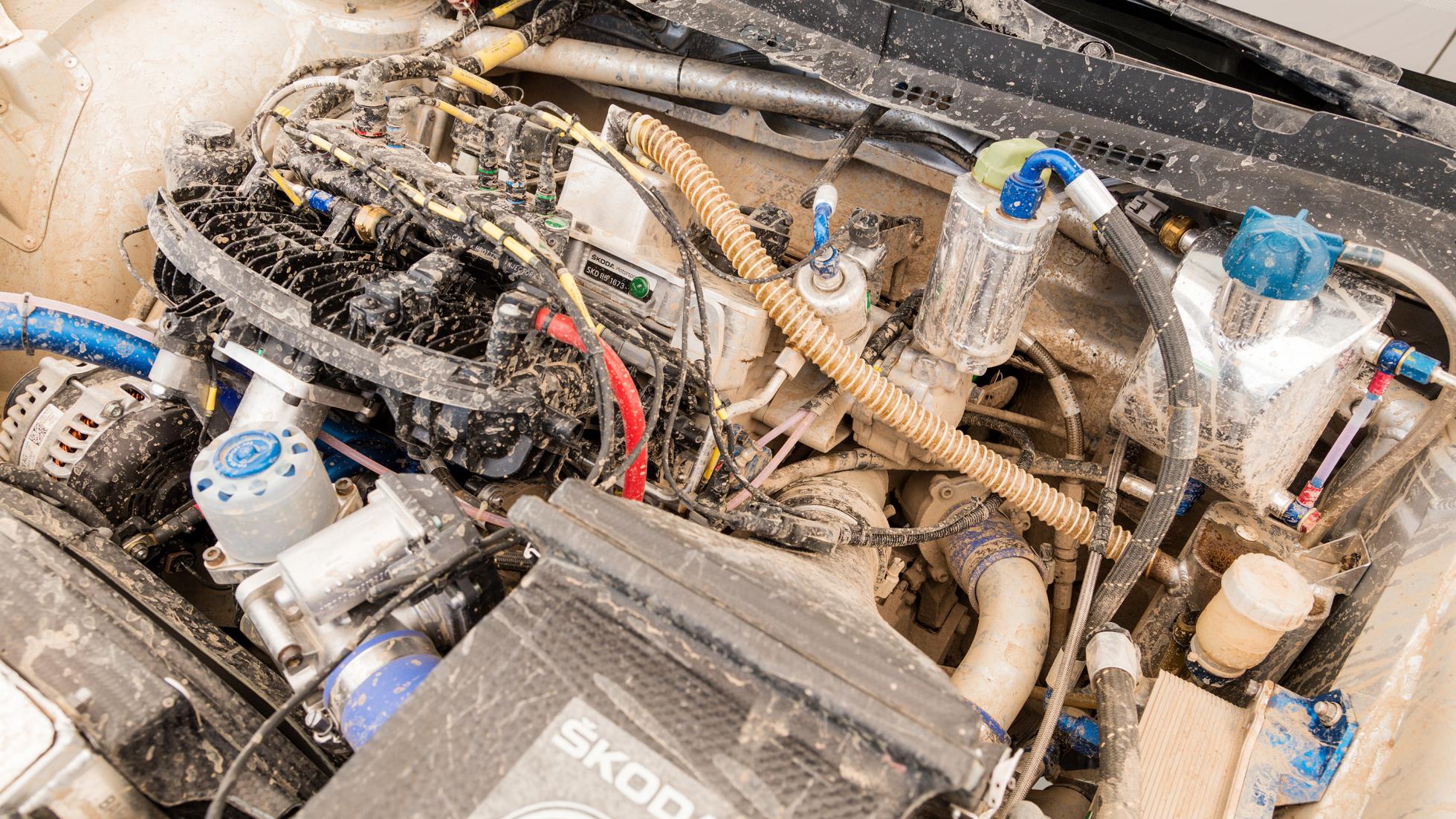 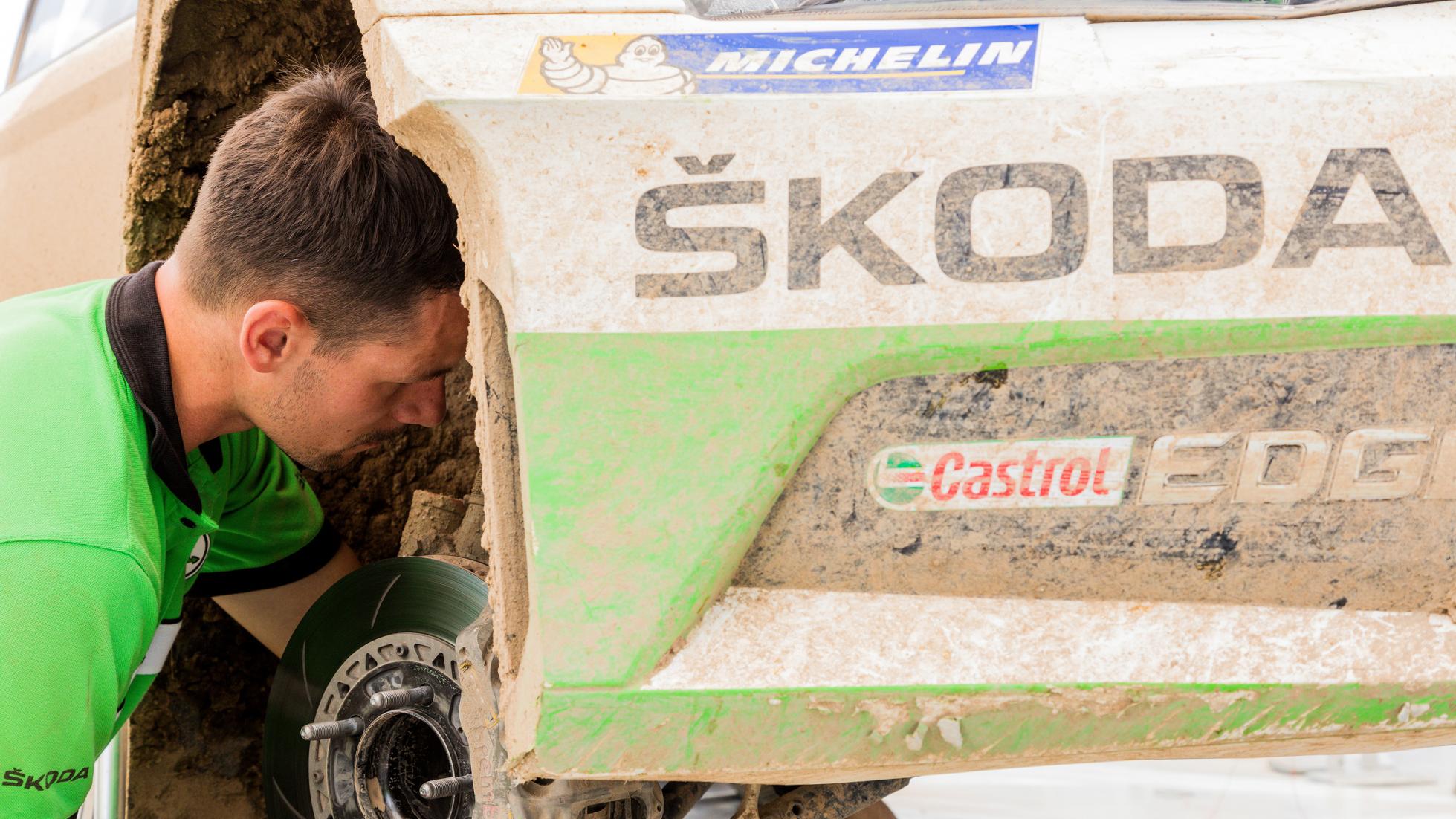 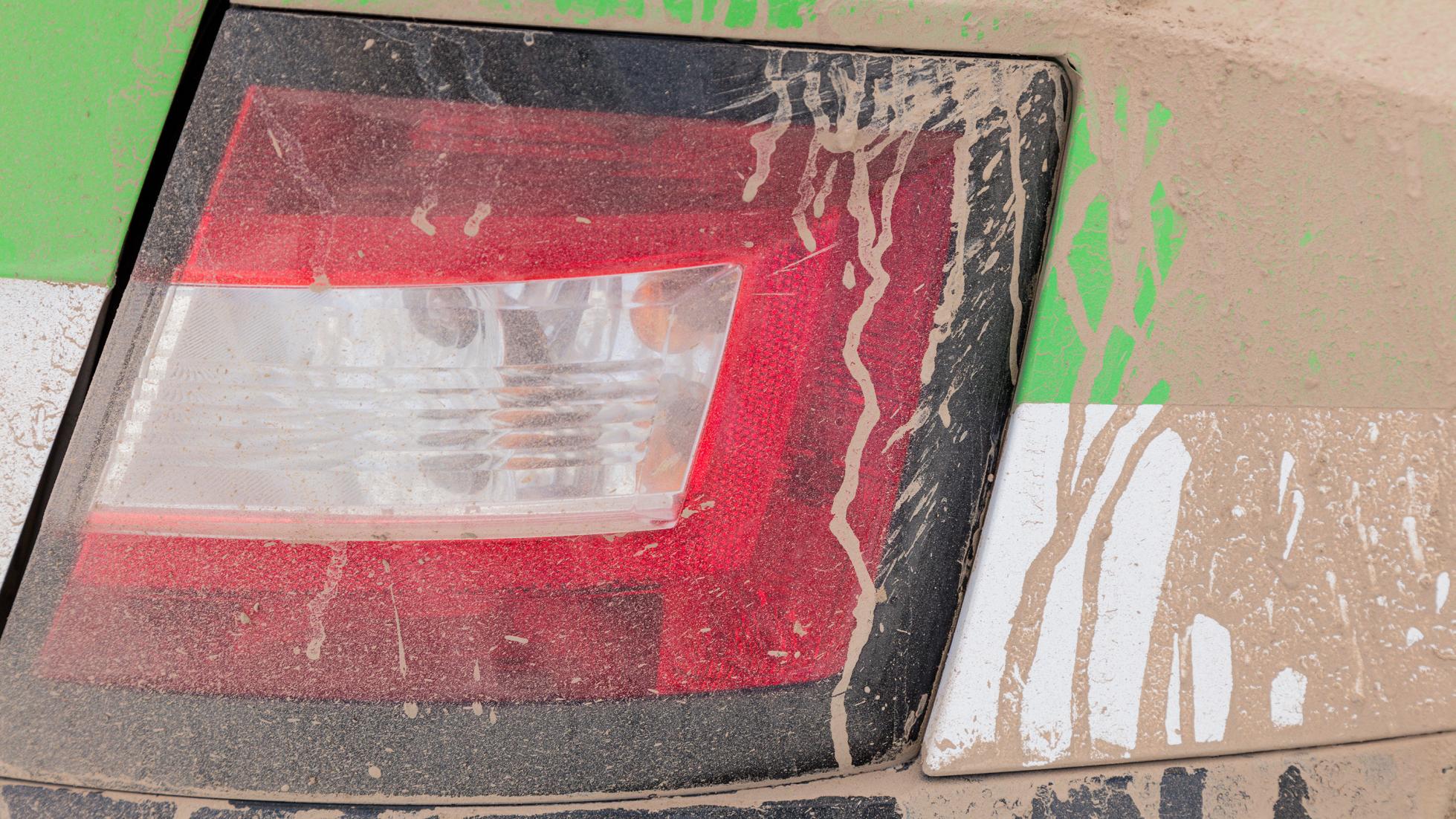 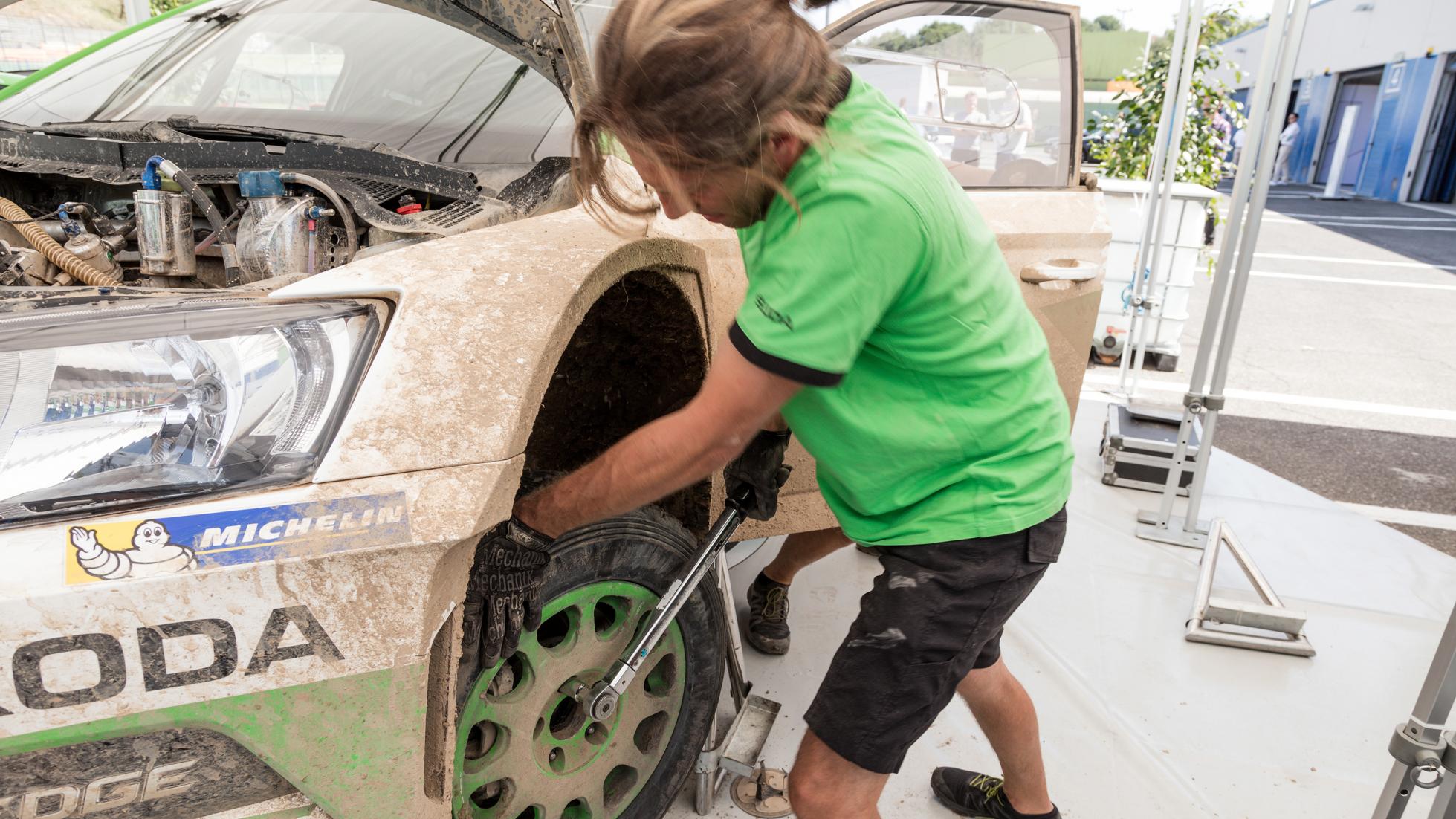 There must be at least 10,000 versions of the original engine in production for full homologation, too. For complex technical reasons Skoda decided to use a China-only derivative of the engine, which meant – when the FIA needed to homologate the engine and ensure it complied by the rules – its officials had to fly to the Far East.

Throughout the season they’ll be checking the engines of Skoda’s cars against privately campaigned customer cars, to make sure their components completely match up.

Power is limited, too. The stats allowed see the Fabia R5 pumping out 275bhp and 310lb ft of torque, both at 4,750rpm, well short of the 7,500rpm rev limit. Which should help longevity of parts…

It’s all policed by an official FIA component. It checks on the pressure of the turbocharger, and if it exceeds 1.5 bar, all power is cut. So Jakub and his team make sure the turbo boosts as much as it’s allowed – to produce as much power as possible – without ever exceeding the FIA’s limits.

“The driver doesn’t want to be pushing on the corner, on the throttle, and to lose everything,” he says. “The part is a product of the FIA and you must buy it from them and fit it. It has the FIA sticker and is sealed by an FIA commissioner before the rally.”

It may compete below full WRC rules, but the Fabia R5 is still four-wheel drive, with the power split evenly between front and rear axles. The gearbox is a sequential transmission produced by X-Trac, and is unique to the car. It has five speeds – another FIA sanction – and must be sold to customers at a prescribed price when a new part is required. 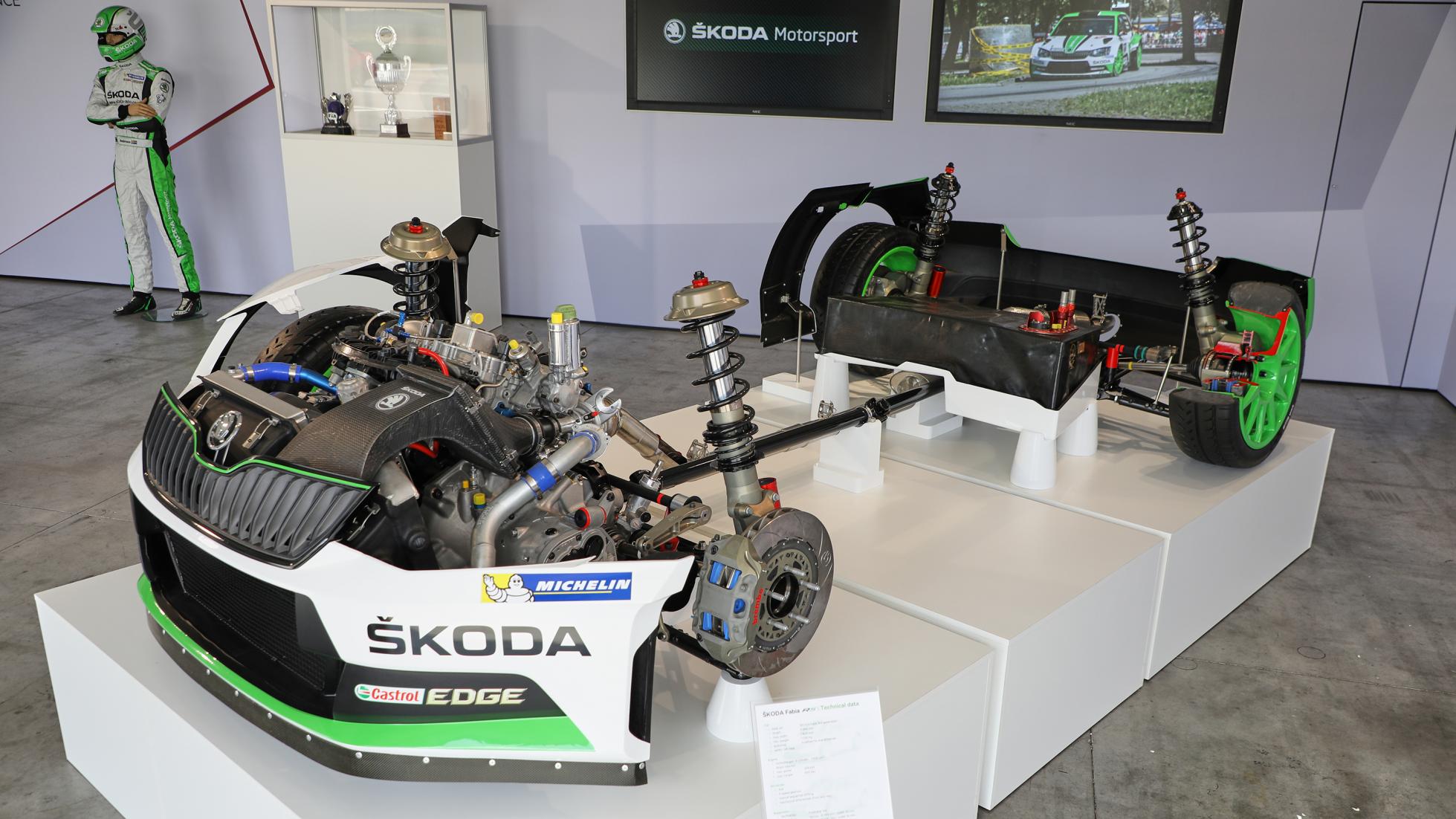 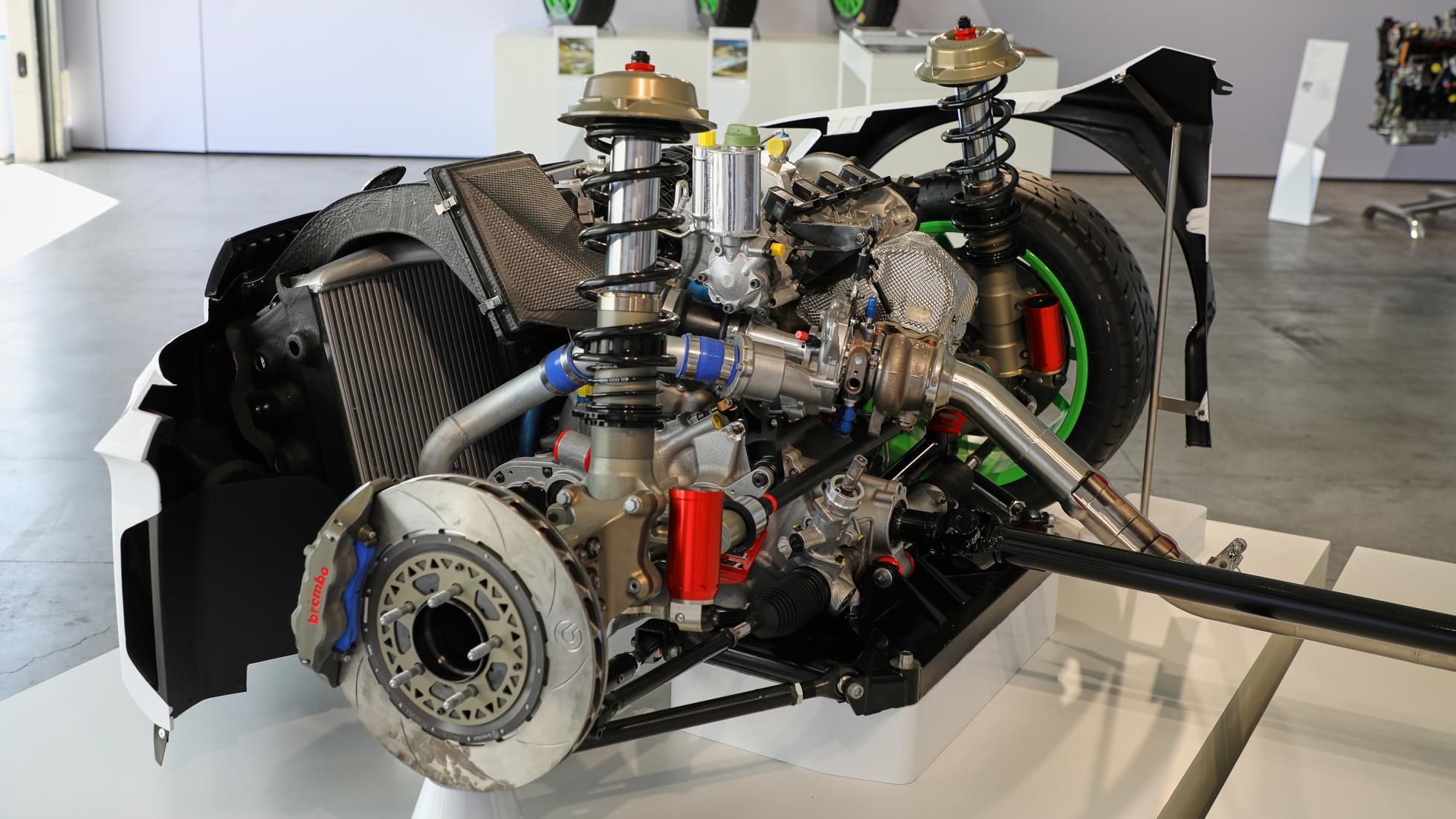 The suspension varies wildly depending on which conditions the car is being set up for – tarmac, mud, gravel or snow – and has a vast array of settings so that customers can tweak it to their experience and preferences. Jakub says the R5 comes with a big manual of Skoda’s recommended setup for each surface. Which today is gravel. We’re on a small rally loop on the site of Vallelunga race circuit near Rome, but what it lacks in size it makes up for in drama.

While I categorically qualify as ‘novice’, and the kind of person who Skoda probably hopes finds an R5 approachable, I’m some way short of its asking price. So I play co-driver so that Pontus Tidemand – Skoda’s works driver and winner of two WRC2 rounds so far in 2017 – can demonstrate the R5’s abilities. What follows are several laps of me grinning like an idiot and unable to ask any pertinent questions about setup or which dynamic traits Pontus enjoys on a warm, dusty surface like today’s.

This thing is berserk, and only the bobbliest of bobble hats would immediately know this isn’t a proper big-boy WRC car. The four-wheel-drive system set up appears wonderfully aggressive, Pontus backing it into every corner, the Fabia sliding at an angle I’d barely expect to rescue before we’ve reached each apex. When the mechanics put more effort into wiping dust from the side windows than the windscreen, you know a car’s been driven far beyond the limits of grip.

Yet when I wasn’t staring with disbelief at the lateness of Pontus’s braking points, I was trying to watch his technique inside the car. It was as muted and subtle as the technique you or I use when we potter to the shops. He made handling the R5 look like a piece of cake. “You can really push the car,” the Swedish driver attests. “It’s a very nice car to drive, very easy to get comfortable with. And it’s very good for maintaining, almost too good. I’ve never had technical issues so far this season.

“R5 is a very good category for ease of use and affordability. WRC is my aim, and this is a very good step to get there. Maybe Skoda would take this step!”

There’s a smirk at the PR man as he says that final line. In fact, rumours circulated Skoda would enter WRC this year. Volkswagen canned its 2017 WRC car in winter 2016 following the group’s diesel troubles, despite its newly aggressive Polo seemingly being close to completion, and some suspected a few panel changes might see it morph into a Fabia. No such luck.

But then Skoda hasn’t got anything to prove; the Fabia R5 is a triumph. Affordable in motorsport circles and easy to maintain, it fits its brand’s ethos impeccably. Yet it also appears to be a complete riot to drive, and is currently the WRC2 car to beat. Those Delta Integrale comparisons don’t seem quite so far-fetched now, do they?