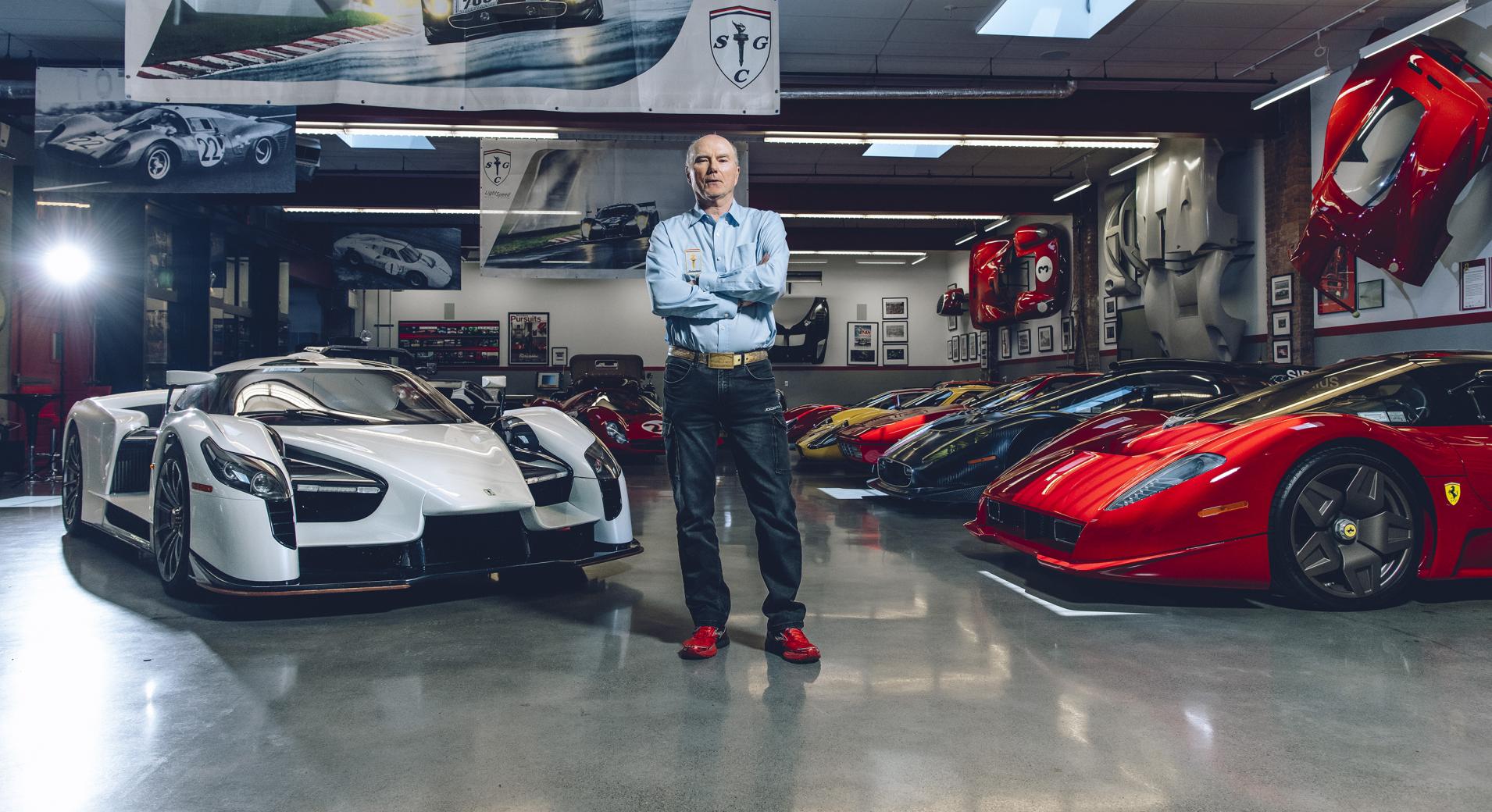 Crawling down an unassuming suburban residential street of timber-clad gable-front houses in Sleepy Hollow, upstate New York, the overly demanding, shrill voice of the satnav pipes up. “You have arrived,” the lady in the dashboard barks. Surely not?

The only giveaway that Mrs Waze is in fact correct is a small plaque on the side of an old beverage warehouse that’s been whitewashed into allusiveness. From it, Lady Liberty’s torch burns on a marble background with three letters below: SCG.

A knock on the door summons the venerable leader of Scuderia Cameron Glickenhaus – Jim Glickenhaus – who politely gestures me in. My pupils take time to adjust to the vast darkened room, but when they do, I quickly realise I have very much arrived. 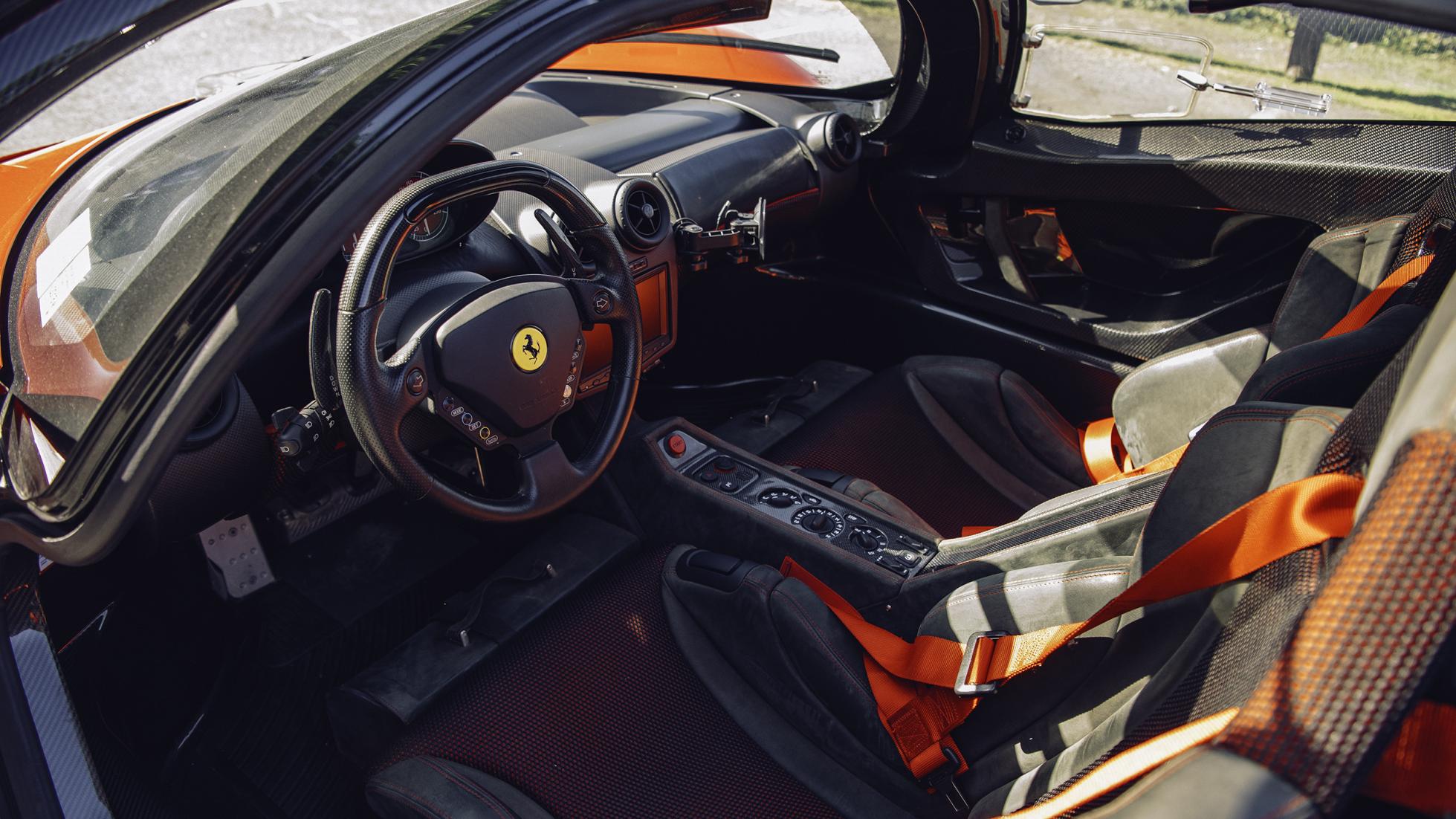 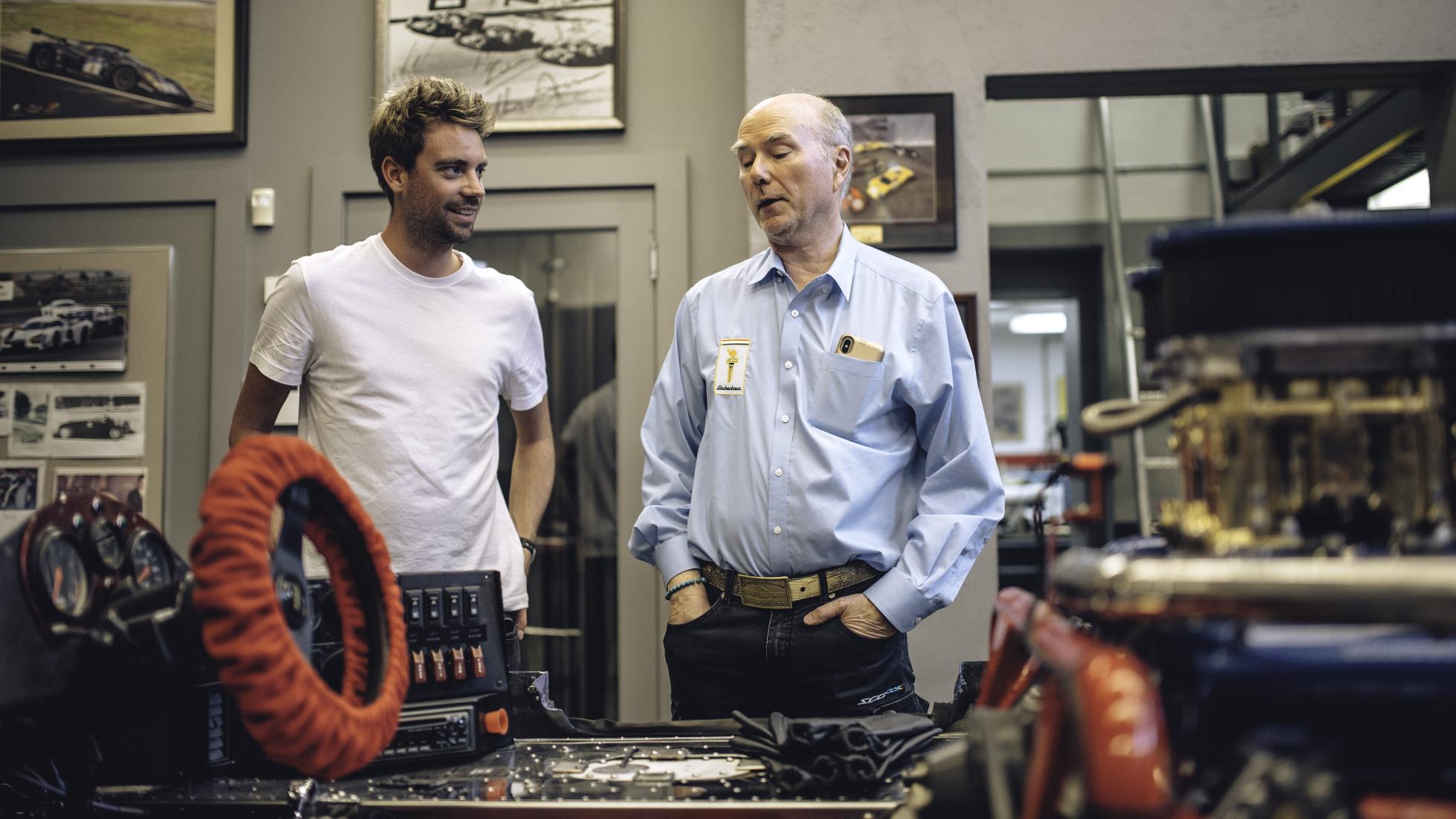 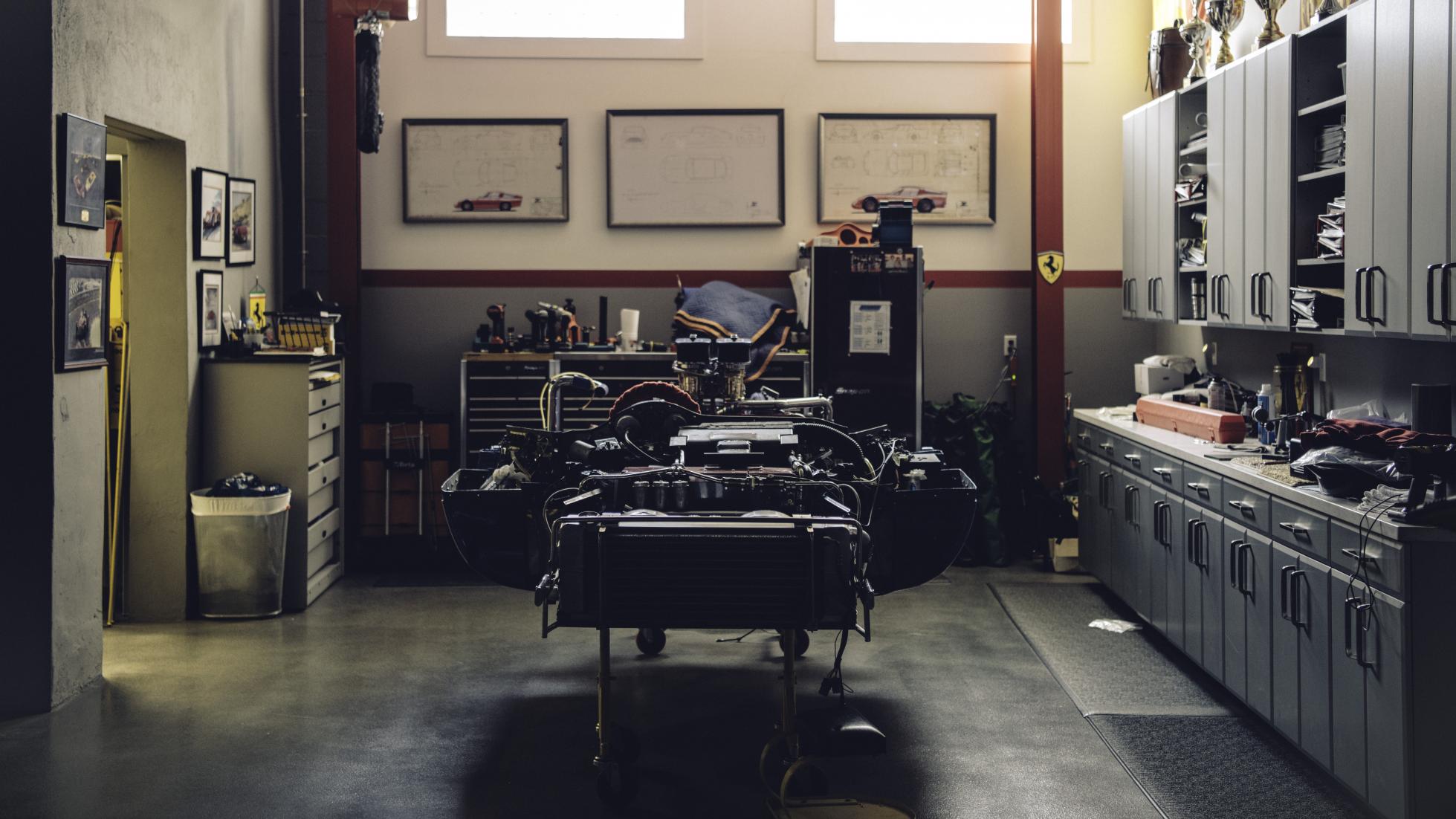 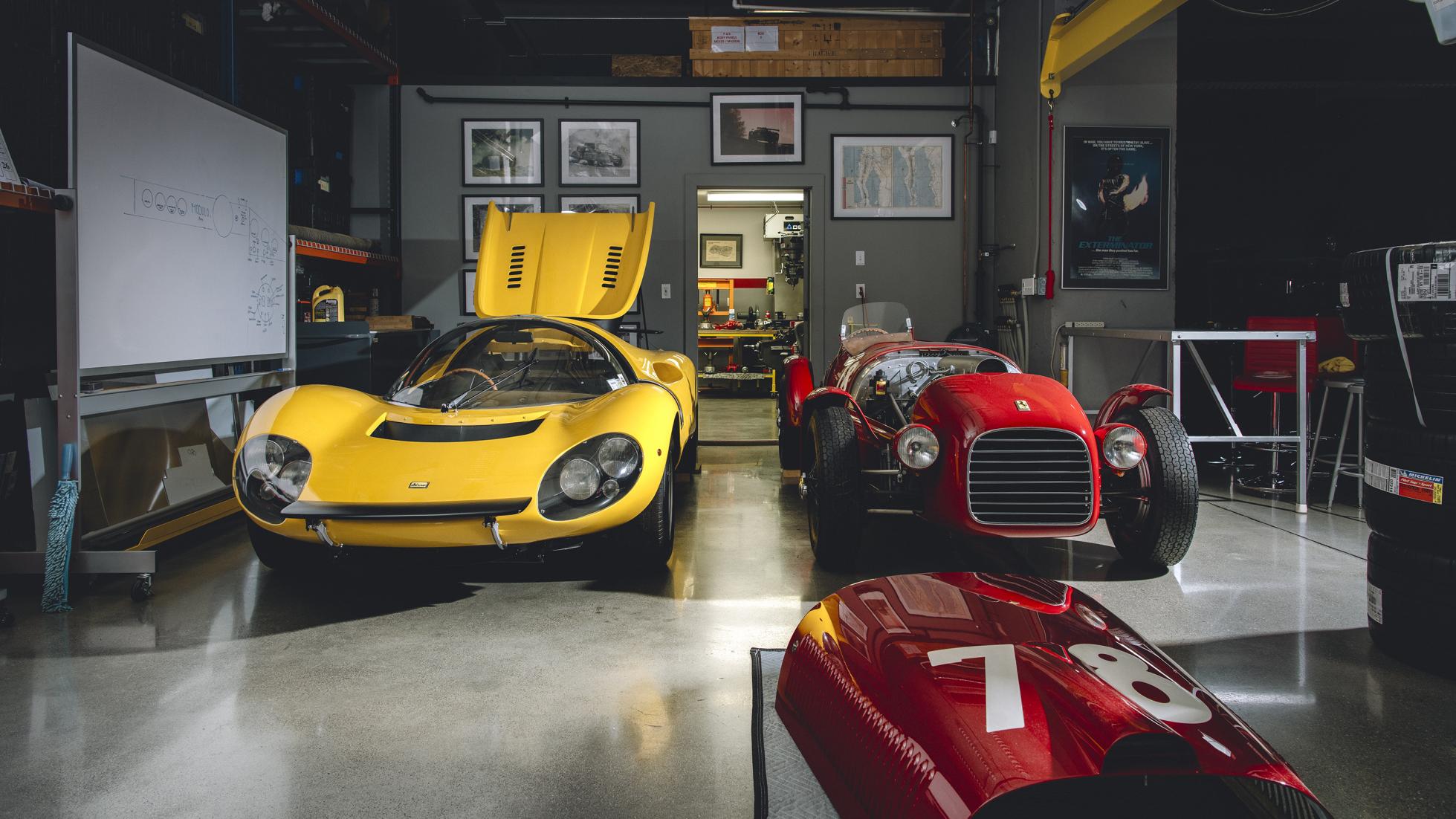 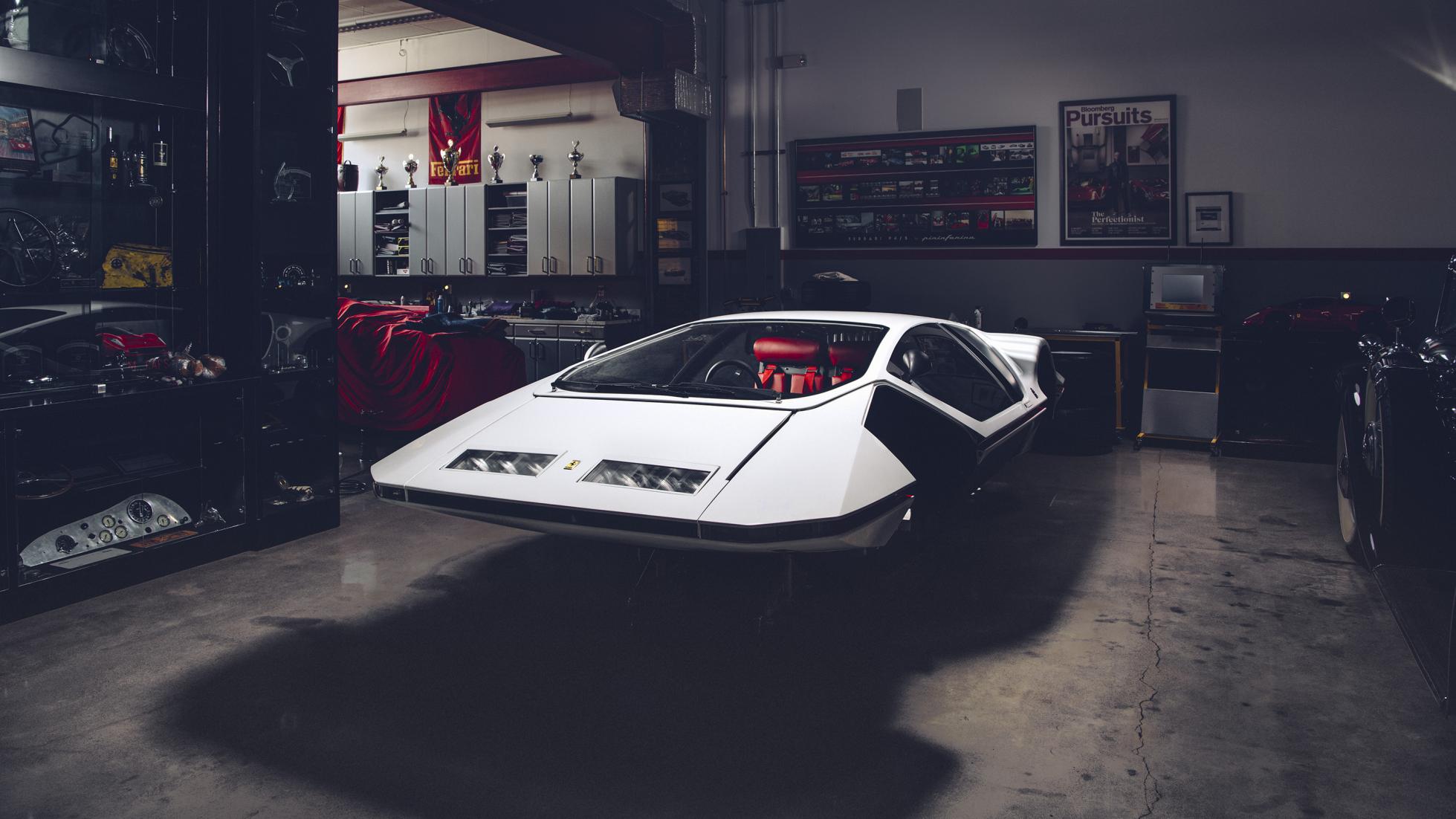 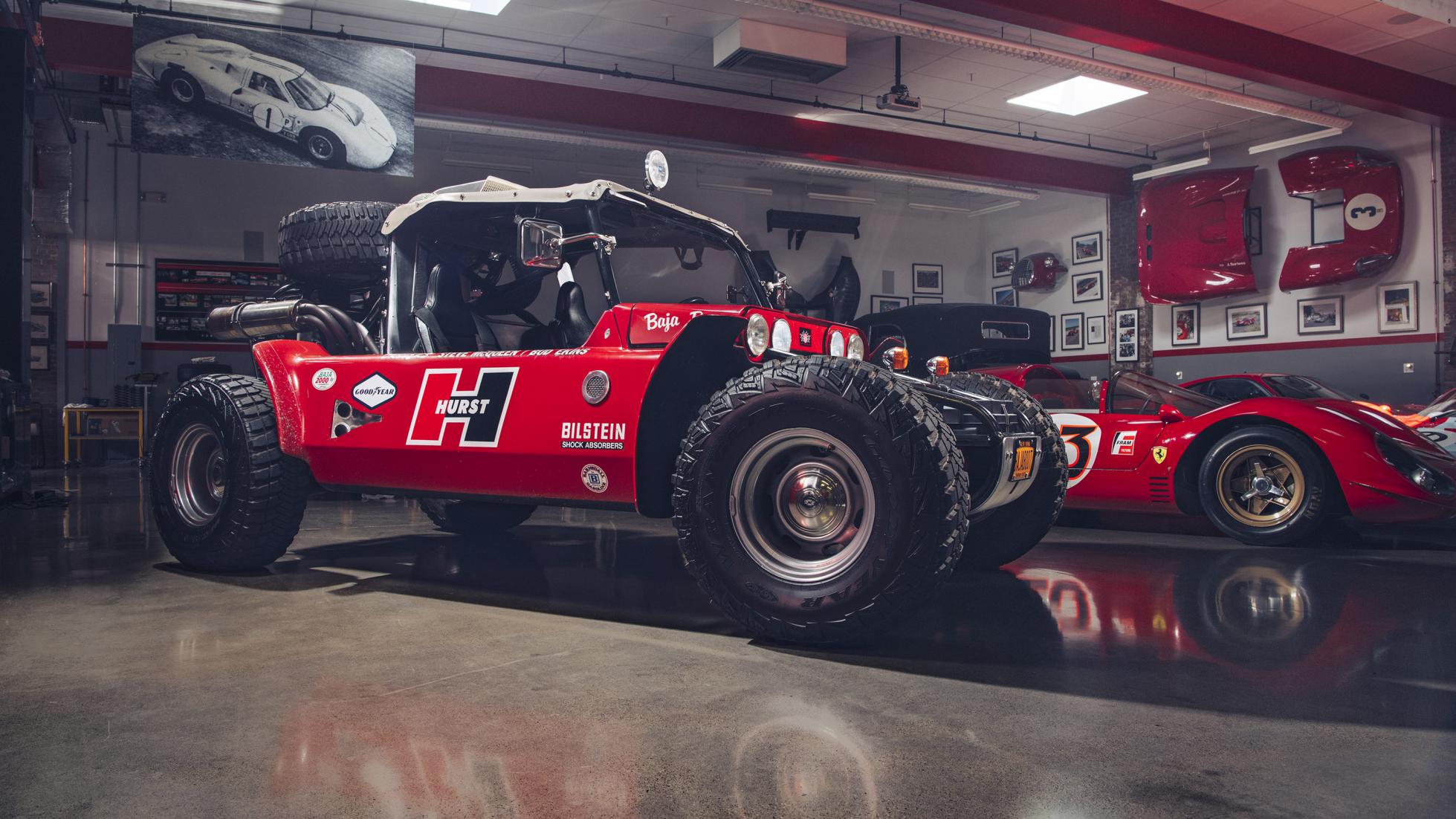 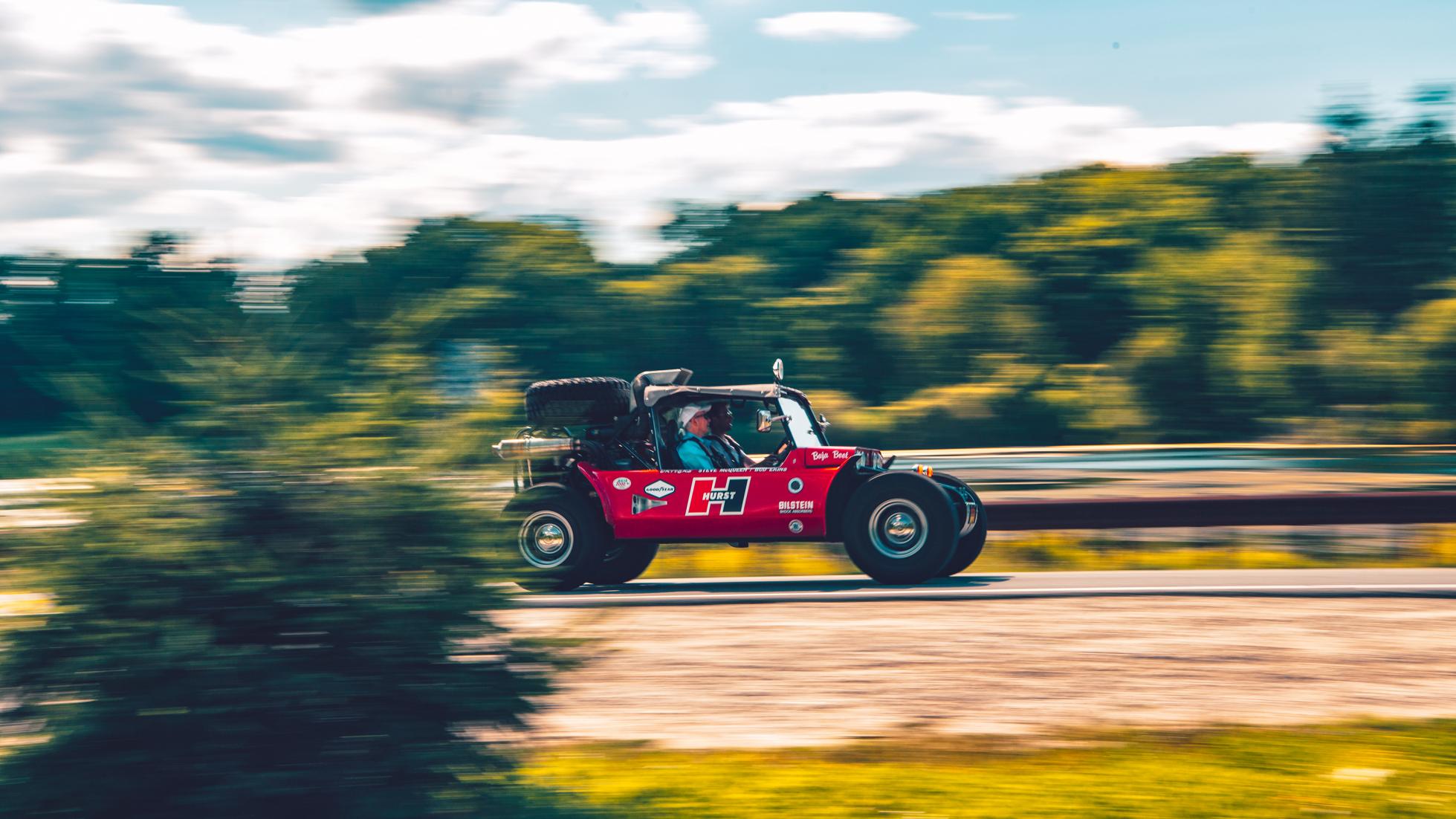 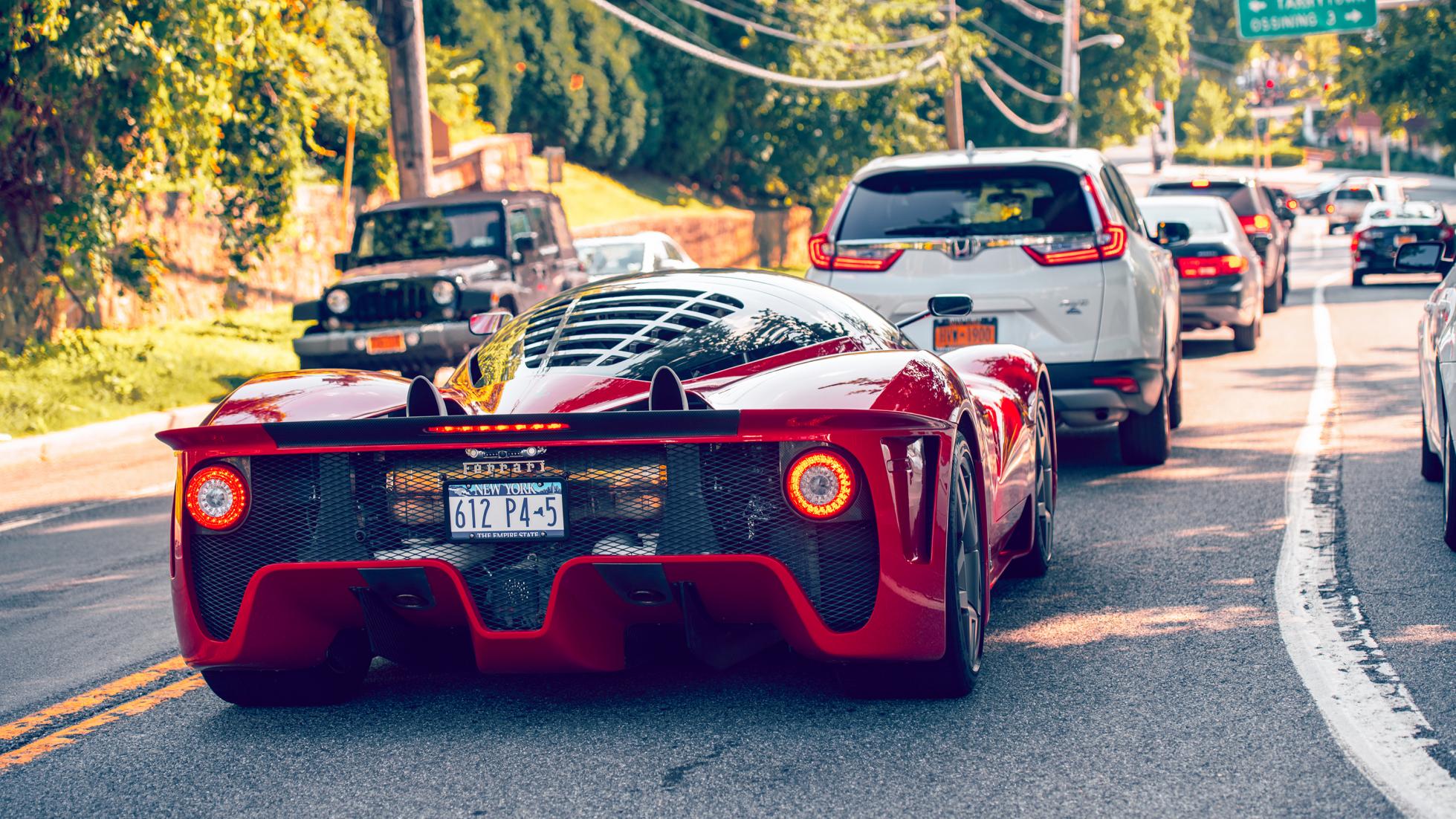 All available space is draped with iconic memorabilia, trophies, thought-to-be-lost chassis and some of the rarest and most expensive cars on the planet. Dead ahead, a 166 Spyder Corsa – the third Ferrari ever made and the oldest continually existing Ferrari on the planet.

Next to it, a one-off, bright yellow duckbilled 1967 Ferrari 206 Dino Competizione. To the right, a Le Mans-contesting, ex-Donohue/Bruce McLaren 1967 Ford Mark IV, the Queen of Yugoslavia’s Model J Duesenberg, and, behind that, a Thirties Stutz DV32 from The Great Gatsby.

Then there’s the proper bite-the-back-of-your-hand stuff: Ferrari’s Sixties endurance racers. Notably, the P3/4 and 412P. One of which being the highly controversial binned and resurrected chassis #0846 – a car that made prancing horse forums have hairy babies. Finally, and where your saliva glands’ afterburners really kick in, Jim’s latest acquisition – Ferrari’s equally nutty and beautiful Seventies wedge, the Modulo.

Aside from being hysterically expensive and significant gems of the automotive world, there’s one thing that all these incredible cars have in common: every single one of them has a registration plate and is driven on the road. And driven hard.

Case in point: Jim’s ex-Mark Donohue/Roger Penske Can-Am-winning Lola T70 that’s out back – stripped down and spatchcocked – mid-10-year service, having done 65,000 miles on NY’s horrendously broken roads. Even the Modulo has a dull yellow New York plate, a concept car now registered on the DMV’s system as a 1972 one-door sedan.

“Not driving your Ferrari is like not having sex with your girlfriend so she’ll be more desirable for her next boyfriend,” Jim quips.

His collection is a lifetime’s work and the tragic reality of being bitten by the car bug at a young age. The son of one of Wall Street’s hardest-working warriors, Seth Glickenhaus, Jim grew up in a suburb of New York City a short bike ride from legendary Ferrari dealership, Luigi Chinetti Motors.

As a kid, Jim would stand, jaw agape, endlessly ogling at Maranello’s finest. Until one day in 1962, when the heavens literally and metaphorically opened. Concerned that 12-year-old Jim would get wet, Luigi Chinetti took one of his Ferrari racing jackets off the wall and handed it to him. It’s a jacket that still hangs proudly in Jim’s office today.

A relationship was forged. And by the time he was 15, Jim would help Mr Chinetti work on his cars. Cars like the 1965 NART 250LM, the last Ferrari to win first overall at Le Mans. Outside the shop, Jim would modify his own ’54 Studebaker to run on rocket fuel and demolish drag strips in order to satiate his need for speed. Turning 21, Jim went into the film business as a producer and director, specialising in violent B-movies and had significant financial success with the gritty vigilante action film The Exterminator.

Coffers lined, he purchased his first Ferrari, a yellow and purple psychedelically striped 275. Purchase price? US$6k. Value today? Many, many millions. Yet Jim drove it 105,000km back and forth to school in the snow and rain. Sometimes rebelliously. Being a boho child of the Swinging Sixties, as an act of civil disobedience and hoping to get arrested in exchange for some publicity for his films, the day that the US government dropped the national speed limit to 88km/h, Jim drove from Boston to New York City in the middle of the night at an average of 170+km/h.

“Luckily the statute of limitations has passed, so I don’t think I can go to jail for it now,” says Jim, exhaling with laughter.

Making money in films, which he then invested in Wall Street, Jim started buying notable racecars like the Lola T70 and Ford MkIV, but converted them to drive on the road. He’d add comforts like aircon and ticket windows so he could pay tolls… in cars that competed at Le Mans.

However, Jim, secured wider notoriety within the car community in 2003 with the gorgeous Jason Castriota-designed P4/5, a US$3m coachbuilt Enzo that initially went down at Ferrari like a granite hang glider.

“Want to drive it?” Jim asks remarkably casually. Instantly my mouth dries like I’ve just had a silica gel Dip Dab. Knowing that he once turned down an offer of US$40m from the King of Saudi Arabia for the beautiful bespoke machine, I somewhat reluctantly agree. YOLO.

As the driver’s door arcs shut, a few realities I never knew existed become frighteningly apparent. Being a rebodied Enzo, the sumptuous bubbled canopy has a six-inch-tall carbonfibre strip right across my eye line. Not ideal when the first thing I have to do is pull out of a junction to begin a loop of Jim’s favourite road routes. Fear instantly builds to the point where vomit feels like it’s leaking out of my palms. Gulp.

Built without the blessing of Ferrari, but designed by Pininfarina, the P4/5 put significant strain on the two companies’ iconic relationship.

“Andrea Pininfarina told me he knew Luca [di Montezemolo] was angry because he shut the helicopter off.”

See, normally, the then-boss of Ferrari would fly from Maranello to Pininfarina’s HQ in Cambiano but keep the helicopter running so he could sprint in, shout a bit, then fly back. When it came to discussing the P4/5, he switched it off. But, having seen the car’s inherent beauty in the flesh, the Ferrari boss christened it an official car.

Looking back now, the P4/5 was actually the harbinger for Ferrari’s now financially fruitful ‘SP’ projects. And, having negotiated the horrendously grabby first-gen ceramic brakes, sluggish gearbox (but had the opportunity to bathe in the aural greatness of a Maranello 12-cylinder unabated by mufflers), I’m more than happy to safely park the P4/5 back in the hangar, next to its racing sibling, the P4/5 Competizione. Using a 430 GT2 as a donor car, Jim mated its engine and transmission to a road-legal 430 Scuderia chassis so he could register it and drive it on the road. But Ferrari took issue with it. So Jim ripped the Cavallinos off, grabbed some Scotch tape, drew the SCG badge on with a felt tip and went racing – later claiming an FIA championship win for experimental vehicles when the P4/5C was converted to a hybrid.

But Jim wanted more. He wanted his own clean-sheet racecar. So in 2013, he started the SCG003 project. Using all the development knowledge from his team’s previous years competitively pounding round the Nordschleife, Jim made his own GT3 car with the ethos of a top-flight LMP1 car.

The result was a full-carbon, predatory and powerful-looking, ‘slicks and wings’ special with styling cues from a Fiat Turbina, which took pole and finished first in class at the N24 in 2015.

It’s a chassis Jim is now offering as a super-exclusive US$2.2m production road car, either in a more road-biased S spec, or hardcore Honey-I-forgot-to-pick-up-some-milk-before-setting-a-Nordschleife-lap-record CS spec. Both cars are capable of 350km/h and ’Ring times in the 6:30s, so serious bits of kit in anyone’s book.

Straddling the wide sill, I slither my legs down under the heavily buttoned bow-tie-shaped wheel and get comfortable in the S. With a hefty thud, gravity closes the carbon butterfly door for me and I go to adjust the mirrors. Ah, there isn’t any adjustment. Rather, two cameras that display your surroundings either side of the parallax digital dash.

Firing the 750bhp, 1150Nm 4.4-litre dry-sumped twin-turbo BMW V8 race engine, it idles and behaves a lot more benignly than you’d think. Fitted with three-way-adjustable adaptive Bilstein dampers it rides tremendously well on NY’s jarring parkways. Once you’re in it, it’s not intimidating, either. Yes, it’s not as easy to manoeuvre as a Renault Twingo, but a Renault Twingo can’t lap the Nordschleife in the silly sixes.

Driving around town, the SCG003 gets as much attention as you’d expect a US$2.2m hypercar to get. But there’s a problem: no one knows what it is. “Is that a Saleen?” one kid shouts at a petrol station.

This is Jim’s next battle: exposure. But he’s not short of ambition for SCG. Next year, he’s producing a second, more affordable road car, SCG004 – a three-seat US$600k-ish supercar with a supercharged LT4 engine from a Corvette and the possibility of a manual transmission for the purists. Being Jim, racing will be at its heart, with GT3, GT4 and GTE variants sprouting out of it too.

If that wasn’t enough, Jim is also getting into the SUV game. But not in the same marketing-led way Lamborghini and Rolls-Royce are. See, Jim owns Steve McQueen’s 1967 Baja Boot. When he bought it at auction he also got its technical drawings.

Being designed by the same man who penned cars for the Moon, it’s an incredibly capable bit of kit (big wheels, low centre of gravity, engine forward of the rear axle, hydramatic gearbox). Jim is now using these blueprints to make a modern interpretation (SCG005) to compete in next year’s Baja 1000, then scale a volcano in Chile as a Guinness World Record attempt. After, it’ll be sold as a G-Wagen alternative for the road. Finally, there’s SCG006, a retrotastic Sixties-style drop-top with 650bhp which – you guessed it – Jim wants to go racing with, as well as use on the road.

Has he bitten off more than he can chew? We’ll have to wait and see. But with SCG being a completely self-funded operation, Jim is lucky enough to play this thing we call life a bit like a game of ten-pin bowling. It’s just with his kind of financial security, it’s like having the guard rails up. Luckily, he doesn’t need them – for the past few years he’s been bowling a strike every time.