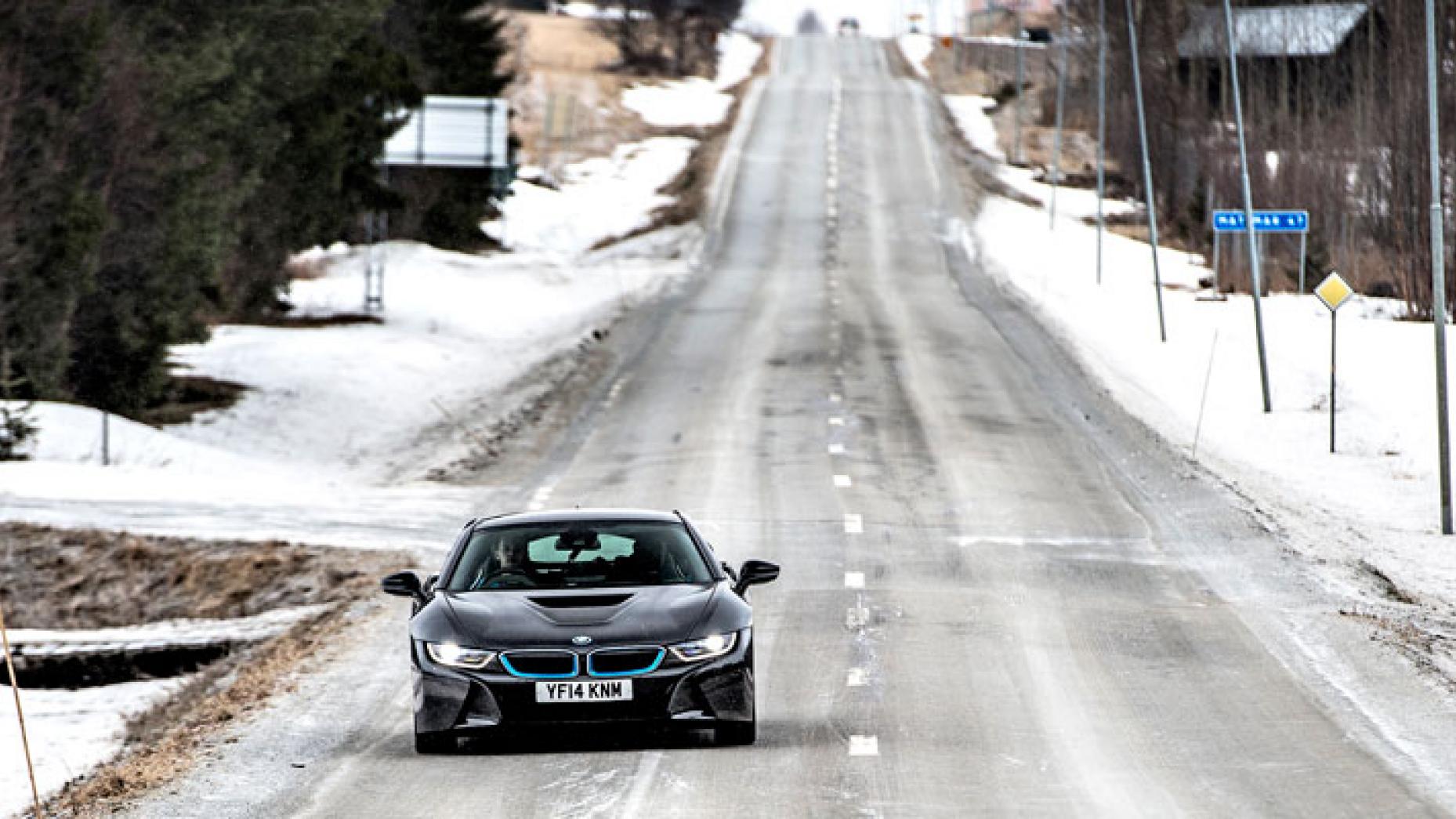 A crisp seven-degree chill greets me as I pocket my Oyster card and exit the tube in west London. I’m making the most of it. I’ve just completed the first tiny hop in a mammoth 2,500km journey, and the destination will be a tad parkier than seven Celsius.

The plan is to drive TopGear’s long-term BMW i8 from the office to Kall in the Swedish midlands, and rendezvous in icy Scandinavia with a smörgåsbord of cars for our TG Sub Zero spectacular.

Clearly an undertaking that requires considered preparation, so I’ve topped up with super-unleaded and charged the i8 overnight. Winter tyres are fitted; a cursory kick confirms the Bridgestone Blizzaks are inflated. Yesterday, I even took the i8 to the car wash - worth some l/100km savings at least. 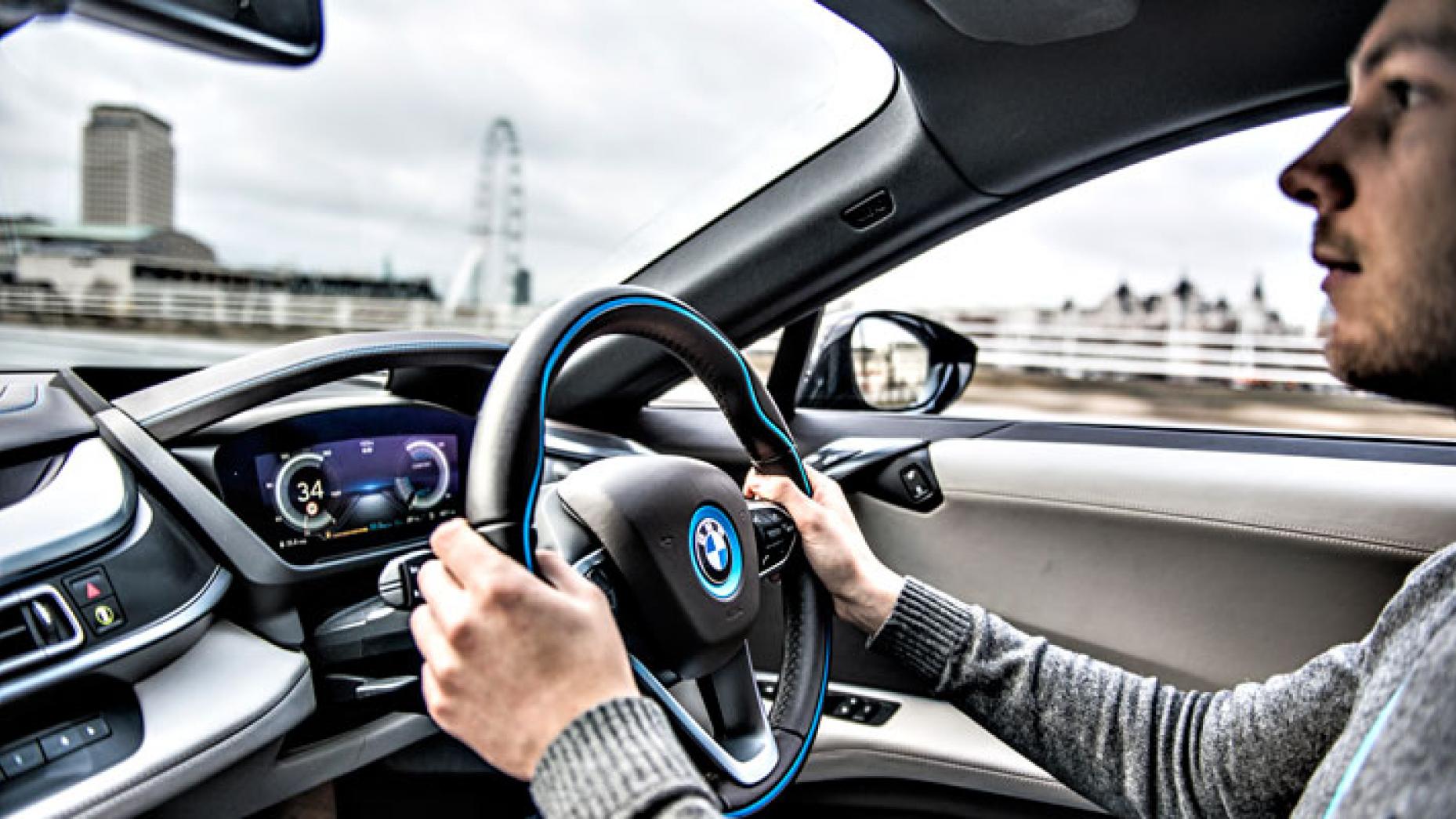 Photographer Rowan is already fussing around the i8 when I arrive with the prescribed squashy bag rammed full of zip-and-popper-festooned clothing. The first hurdle is cramming our kit into a mid-engined 2+2 that’s built around a space-swallowing carbon tub.

Despite appearing to have the height/length ratio of a B2 Stealth, the i8 stands 13cm taller than a Lambo Huracán. With my worldly possessions pinned between the headlining and a slim seat’s backrest, we tug the impossibly cool butterfly doors downward and depart. 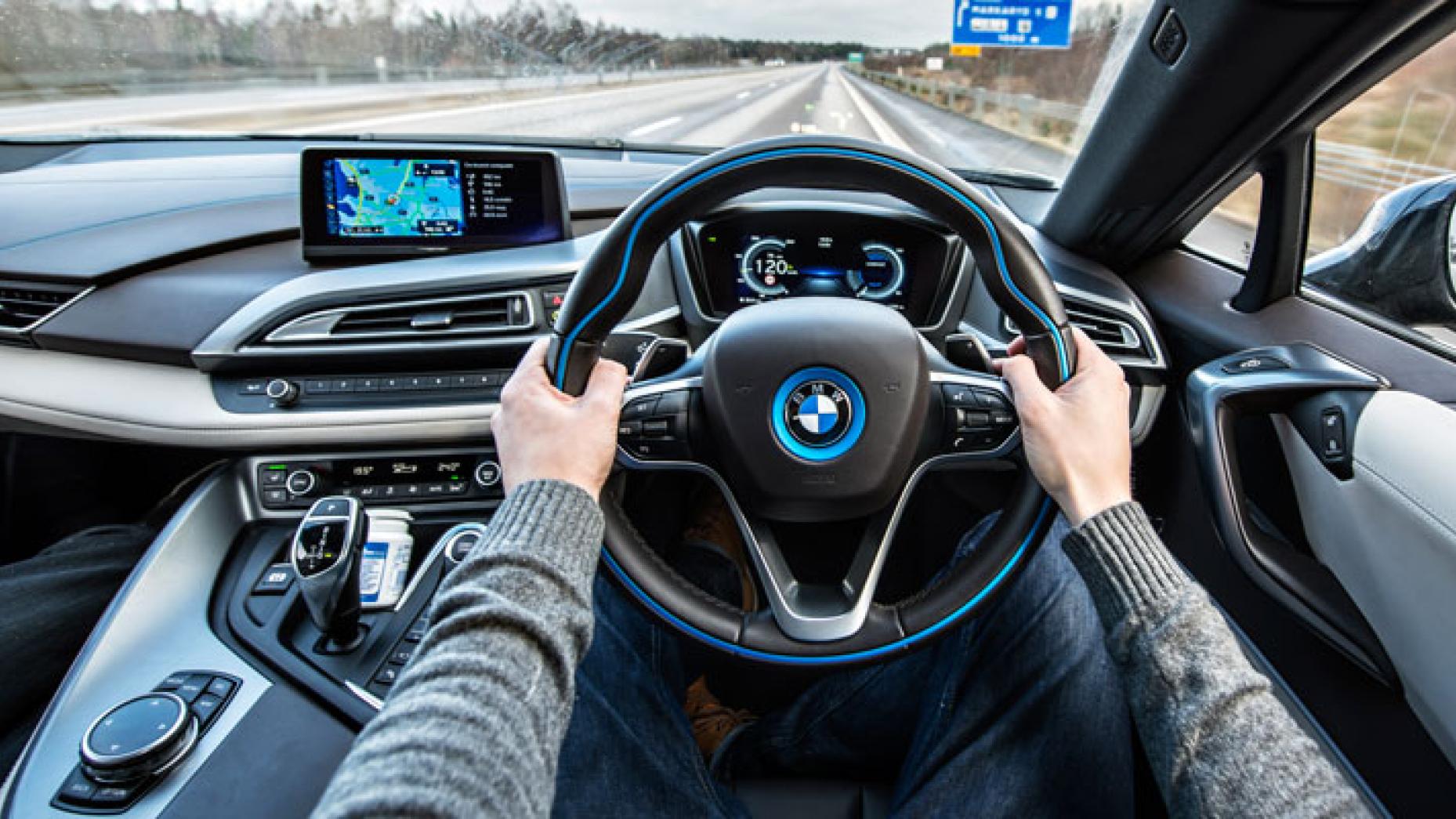 Daily, I’ve walked past the TG i8 in the car park, marvelling at its flying buttresses and the elegant wheelhouses melting in and out of the bodywork, but this is my first proper drive in our 2014 Car of the Year. Immediately, the prognosis is good. The driving position is spot-on - low, long-legged, with the perfectly round steering wheel telescoping generously out of the dash.

Comfortable. Setting the iDrive nav for Folkestone is the work of a moment, the Bluetooth phone connection another trifling task. Because it’s all familiar BMW, ‘sense of occasion’ histrionics are absent.

Well, apart from those doors. And the frankly dangerous view out of the wing mirrors. It’s not a lack of visibility - it’s that every time I glimpse the reflection of those epic rear curves, I’m left gawping at the aerodynamics and not at the BMW Z3 gunning for a traffic-light grand prix down Embankment. Not until the i8 is shadowed by Canary Wharf does its 1.5-litre, turbo three-cylinder strum into life. We’ve covered about 12km on battery power alone, which probably justifies the Congestion Charge exemption in the UK.

Official electric range is 37km, but the temptation to clog it from standstill up to 50km/h and ride that satisfying gob of torque in near-silence is downright irresistible. And while you’re conscious that even in ever-cynical London, you’re turning more heads than a dozen Knightsbridge Lamborghinis, the i8 is not an intimidating urban runaround.

You’ve got on-demand thrust, manageable dimensions and a decent view in the mirrors. Oh look, there’s the buttress again. 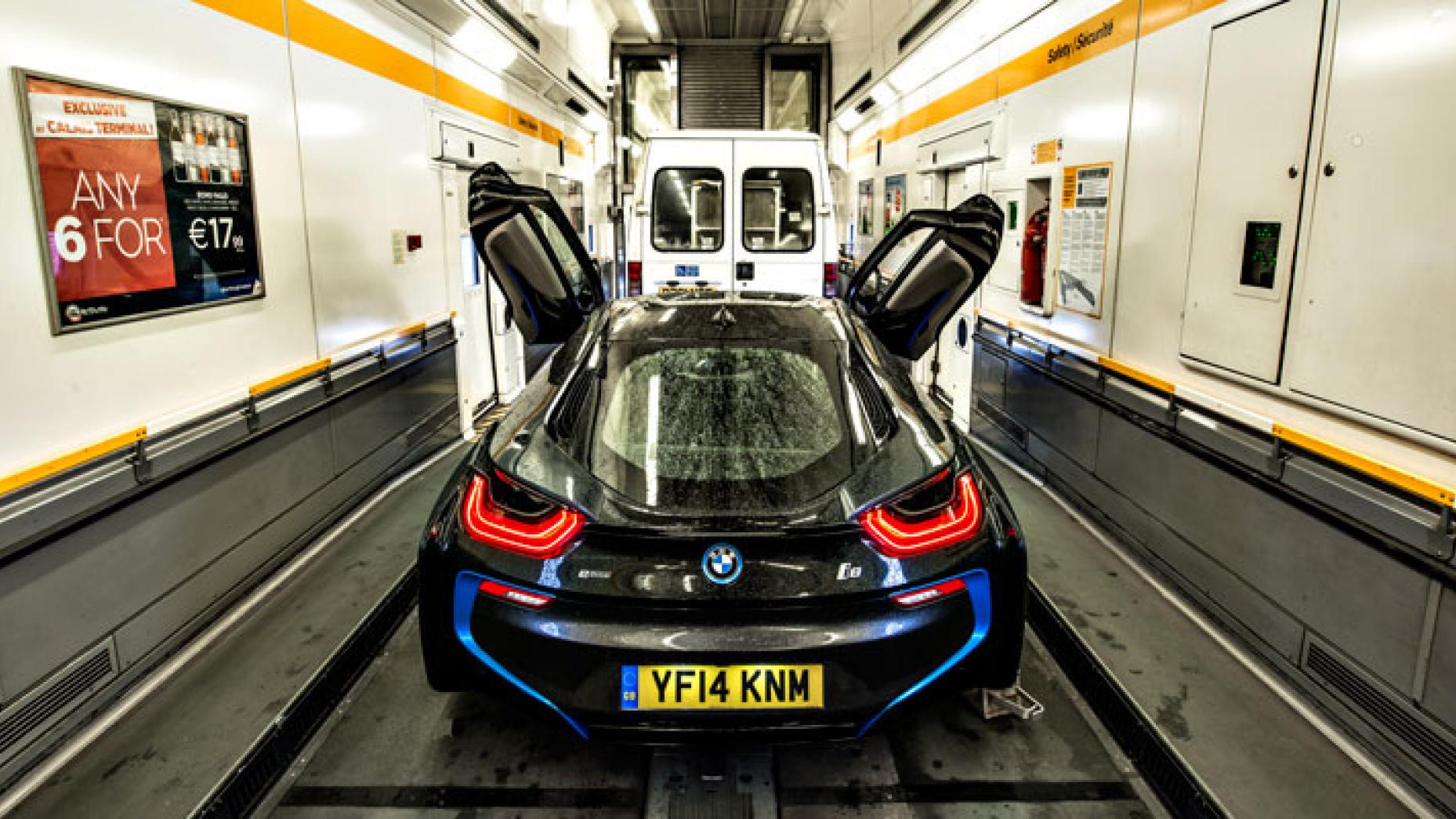 Sleet and driving rain batter the windscreen as we cruise south, beginning a game of tortoise and hare with a deluge that’ll leapfrog us to Germany. There’s plenty of standing water shimmering on the motorway on both sides of the Channel, and I find myself squeezing the steering wheel in anticipation of an aquaplane shudder that never arrives.

Riding on tyres half the width of the usual mid-engined suspects’, the i8 ploughs on regardless. Northern France passes in a grey blur of drizzle; the only signal we’ve entered Belgium is the increase in road din from the crazy-paved motorways.

Minutes later, the clickedy-click of Rowan’s camera shutter captures the ‘Welkom in Nederland’ sign, and the noise ceases. Super-slippery aero results in an uncanny lack of wind noise too. I’m getting to like this car. Five hours in and no fatigue whatsoever.

My fear that this highly strung technofest would be a high-maintenance diva are unfounded. And no carbon-tubbed car has a right to be this refined - no resonance, no crashiness. In search of a sterner test, we cross into its homeland. 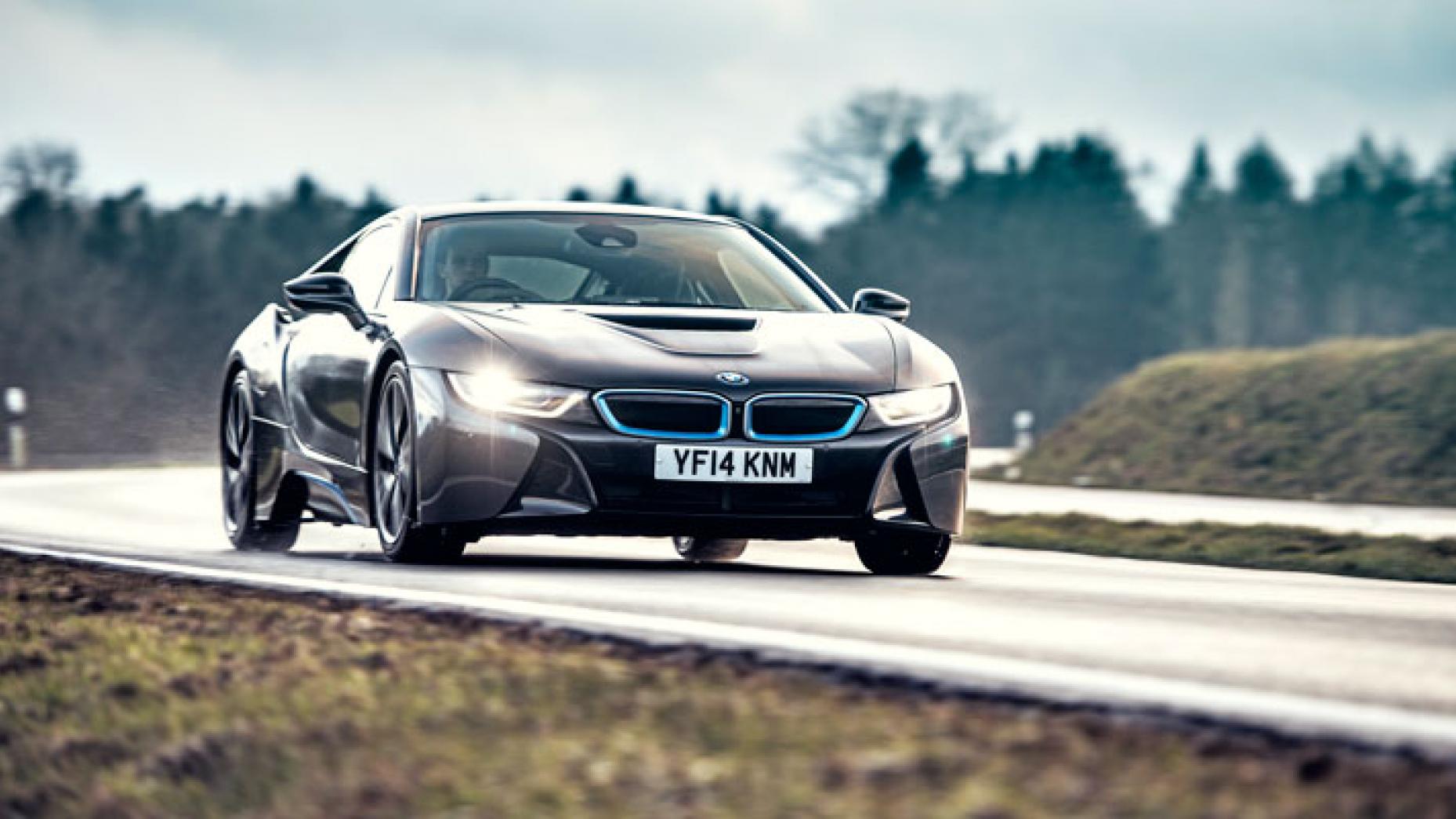 While Rowan checks the obligatory ‘Driving in Germany Speed Shot’ is sharp, I eye the signs for services. That blast has summoned the range warning, and after 530km, we pit-stop in Barmingholten.

The tank is a city-car-sized 42-litre job, so this will be the first of five fuel stops between London and Kall. The i8 will average 8.2l/100km across the entire trip, with a best of 7.7l/100km shown. 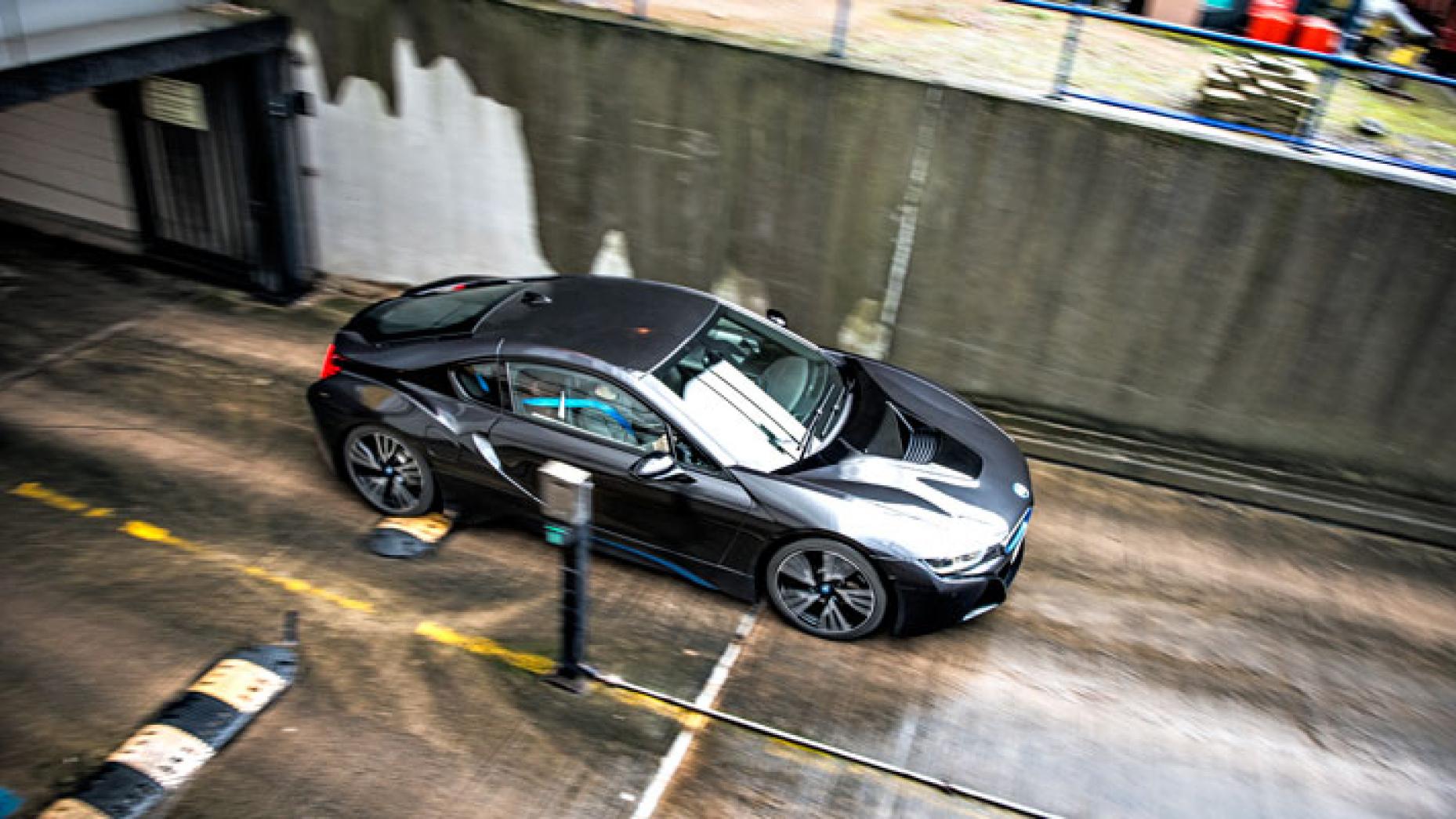 Keeping the stumpy gear-selector leftward engages Sport mode, which charges the battery via a crankshaft generator. Cruising at 190km/h for an hour easily juices the batteries for some silent running around Hamburg, where we stop in the ‘HafenCity’ for nocturnal photography. 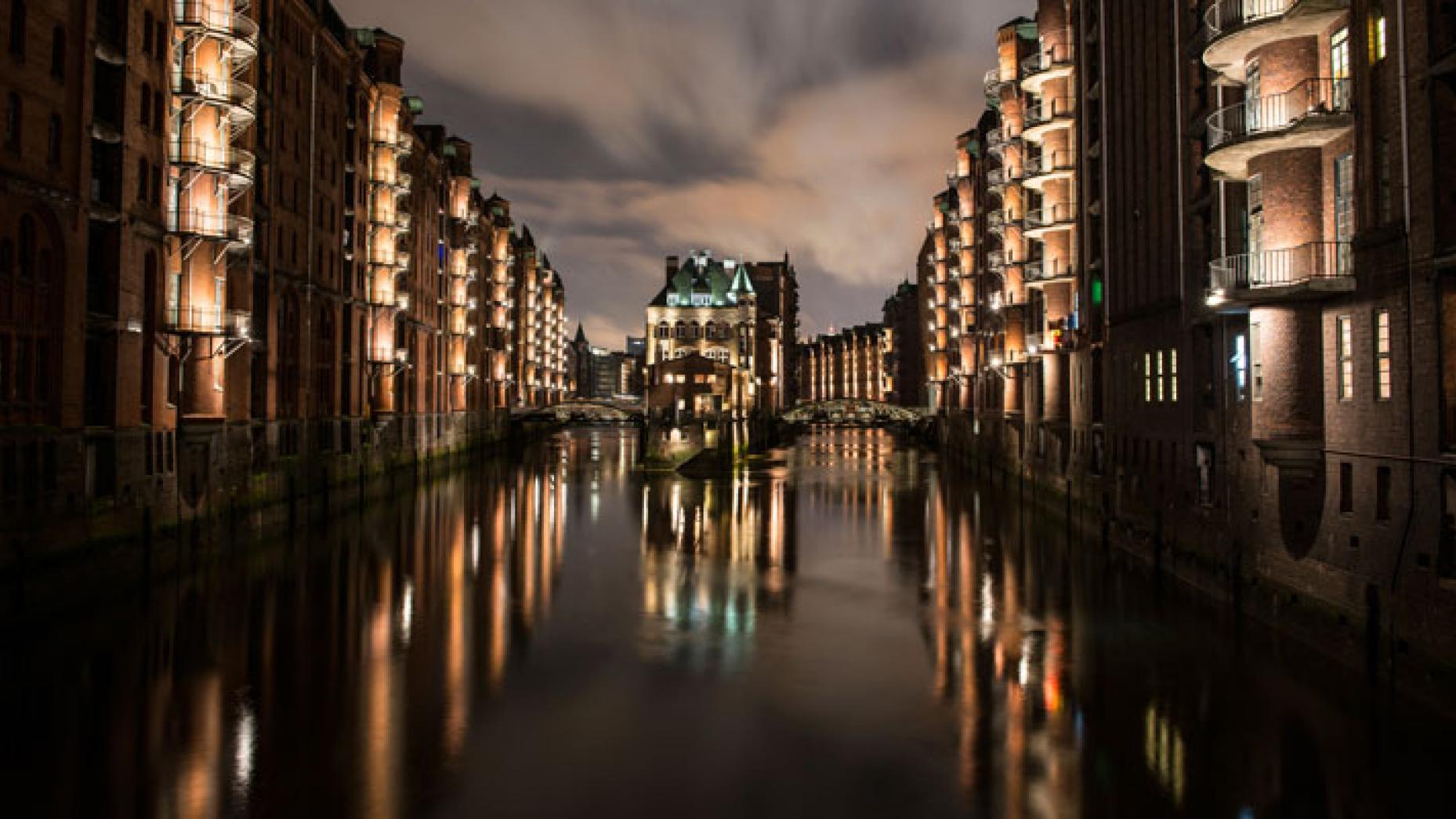 The i8 fits in here, a now not-so-gleaming beacon of progress, of maintaining relevance. Sidling across the shadowy riveted girder bridges, the silence disturbed by electric motors whirring and squidgy tyres pattering over the cobbles, it oozes menace and, in these surroundings, a mighty display of German mettle.

Seventy-two years ago, close by, an estimated 43,000 civilians were killed in an RAF bombing raid and resulting firestorm. Jump forward to 2015, and this area, this car, look so modern, so forward-thinking… I’m rather glad Western Europe has learnt to get along. 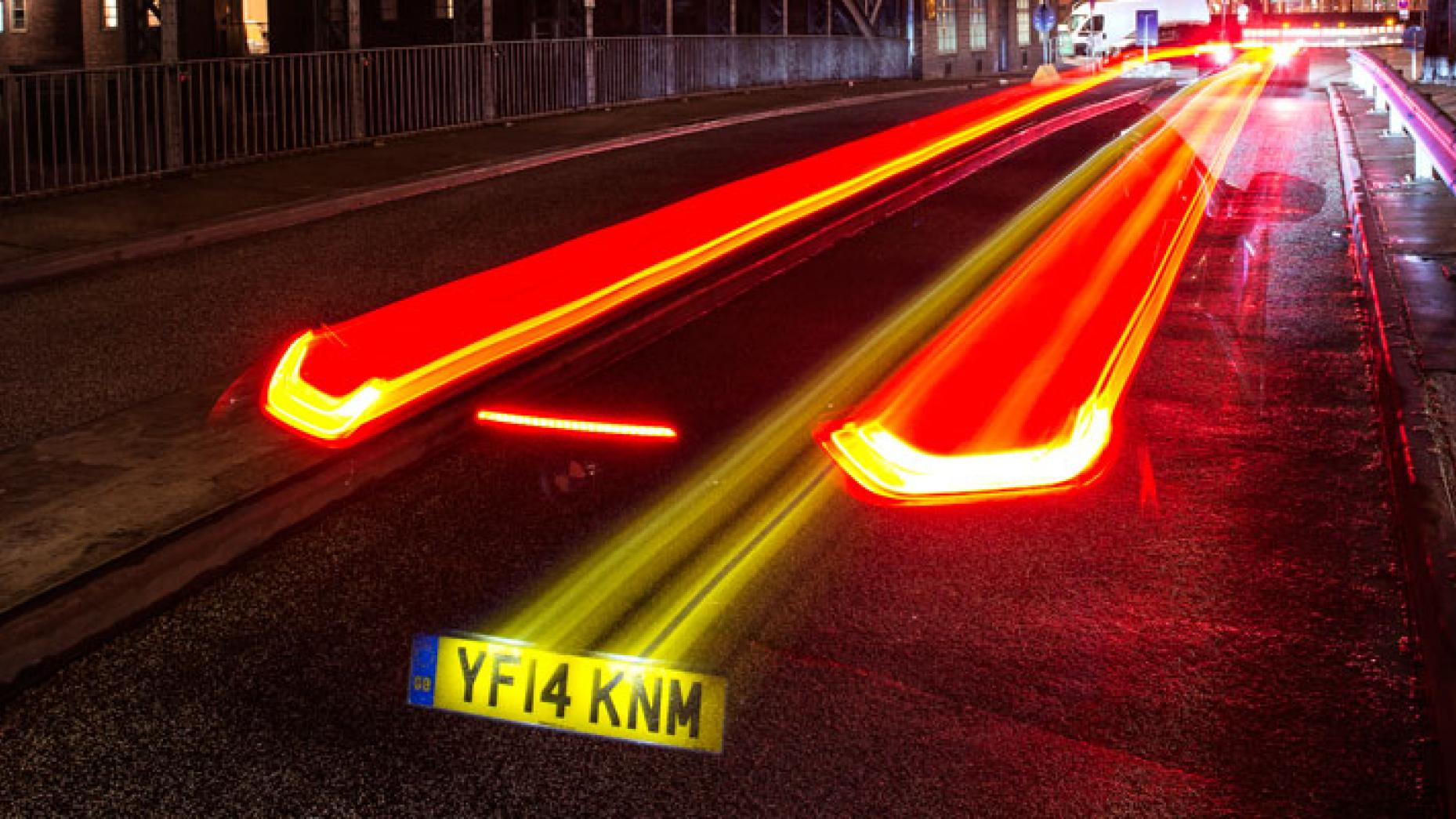 Rowan takes the wheel for the graveyard leg, charging north to the port hamlet of Gremersdorf. At high speed, the i8’s bodywork scythes through the damp cold air so viciously that twirling vortexes of fine spray shoot into the night.

This live-action wind tunnel (and a McDonald’s) keeps me conscious until we stumble into our bizarre Route 66-themed motel around midnight, glad to be out of the squally bluster. Celebrity status is assured when piloting an i8, and you’d better be ready to recall its stats immediately after executing the rehearsed graceful exit. On the ferry, a small audience gathers to fire questions relentlessly - all that’s missing is a ‘Press’ sign tucked into a trilby hat.

A lady fuelling her laden 5 Series spots our packed-to-the-rafters i8 at a Danish filling station and offers a straight swap. Awfully kind, but there’s no way a Five swallows distance better than the relentlessly competent i8. At the apex of its roadway, between the 204m central towers, its curvature is so severe I can only see road and sky when looking front and rear - no land, no sea - just an immaculate road into the heavens. It could only be Scandinavia. Naturally, Øresund has even been the setting for a moody crime drama. It’s already bitingly cold as Rowan hops out to shoot the bridge, the wind snatching the doors up on their gas struts. Yet it’s not until the evening that the patches of roadside snow invade the road, as the temperature drops to -10° C.

Heated seats simmering, we forge northward, the diffuser funnelling a triangular vortex of spindrift in its wake, while the local cars just kick up untidy clouds. Monday morning’s final leg beckons. Rowan and I drag our kit out of a minuscule but quaint B&B that looks to have been decorated by Thora Hird and crunch across the fresh powder. Even in the sub-zero morning, the furiously complex hybrid system doesn’t throw a single wobbly. And then something strange occurs. As we home in on Kall, the snow thins, retreats from the roadside and disappears from the pine forests. We pick up speed, tyres back on tarmac rather than sheet ice.

The track up to our sawmill base is a dusty brown, not virgin white piste. “Warmest winter for 40 years - never seen anything like it,” its owner, Egon, chuckles. ‘On thin ice’ jokes rouse half-smiles from tatty, chapped lips. While Rowan inspects the toybox awaiting icy jeopardy down at the lake, I clamber out of the largely unstained i8, amazed how its aero has lifted grime from the flanks. What an extraordinary grand tourer.

The i8 has blown my preconceptions of its comfort zone to smithereens - it’s bulletproof. As I duck under the driver’s door one last time and thumb the engine stop button, there’s the briefest glimpse of the ambient temperature before the LCD readout flickers blank. Some 2,460km later, it’s six degrees outside. Not a render, not a one-off: this is a production EV. Here's what it does, and what it means While other manufactures scramble to create EV platforms, BMW is taking a different approach