The Hyundai i20N’s rear Isofix points are the worst. Buried deep within the seat cushions behind fiddly zips, requiring a frankly medical foray to locate. (“Pass the latex gloves, nurse. I’m going in...”)

Yes, while Harris, Marriage and the rest skid blithely round Dunsfold, some of us are taking our job seriously. I have been tasked with running the rule over the group dubbed ‘family cars’, and as anyone with a family knows, the most important feature of a family car – performance or otherwise – is... Isofix.

Thus, with the aid of a) the trusty TG Road Test Child Seat and b) a very tiny Stig, I can officially report that, while the i20N is an Isofix shocker, the other four contenders – BMW M3, VW Golf R, Porsche Taycan Cross Turismo and BMW 128i – are all exemplary in the ol’ universal anchorage department: proud, confident mounting points, sheathed by neat plastic guards. Want to get your Isofix-fix? Avoid the Hyundai.

Proper consumer journalism done, tick. Now for some skidding around.

And for skids, we must begin in the M3, the sole rear-drive offering of the quintet. Not least because getting behind the wheel of the M3 provides respite from looking at its face. Aesthetics may be subjective, but, like it or not, the way a car looks says something about the person driving it. What the M3 says about me, I’m not sure I want saying about me. 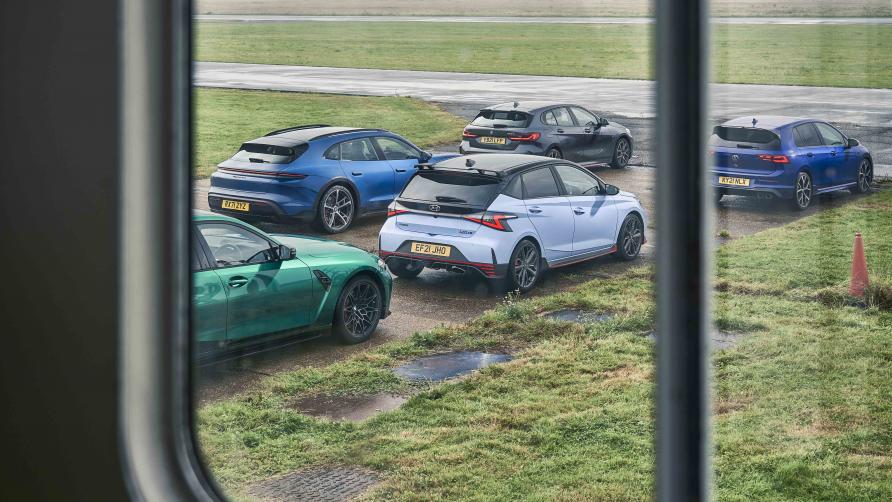 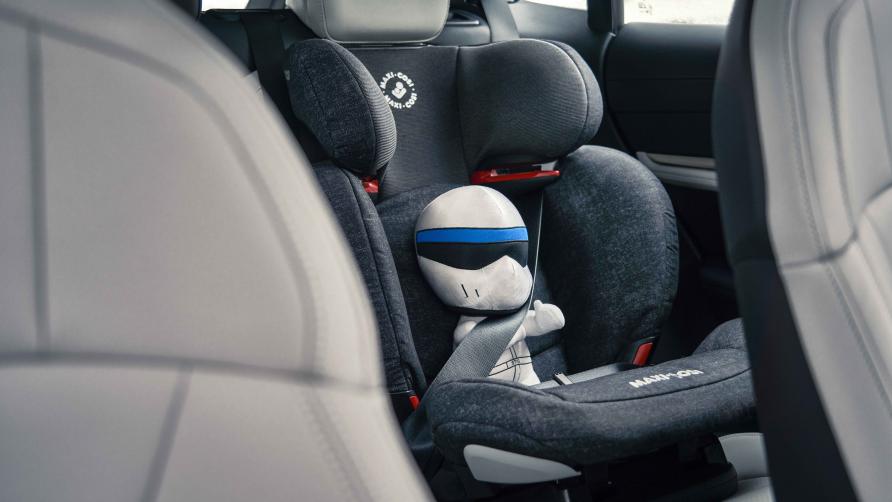 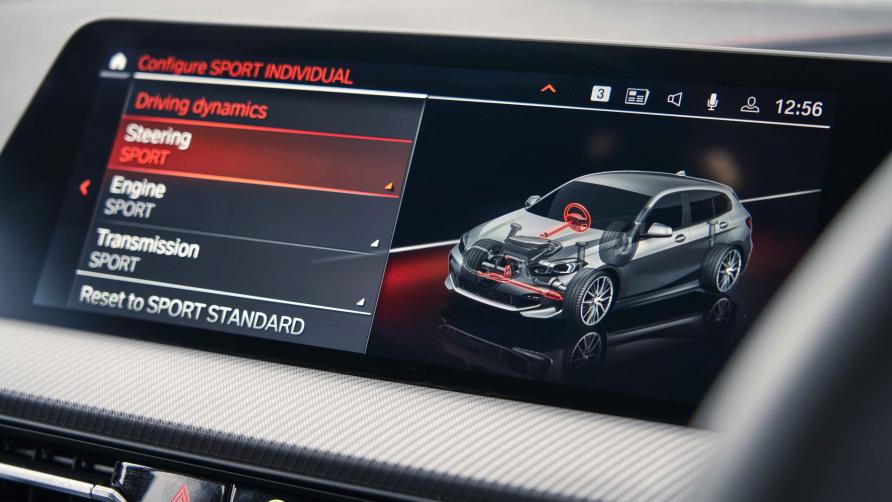 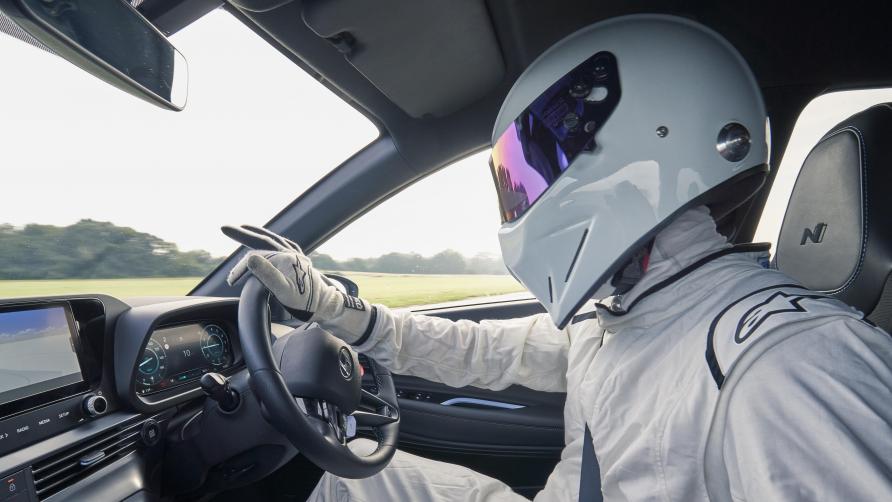 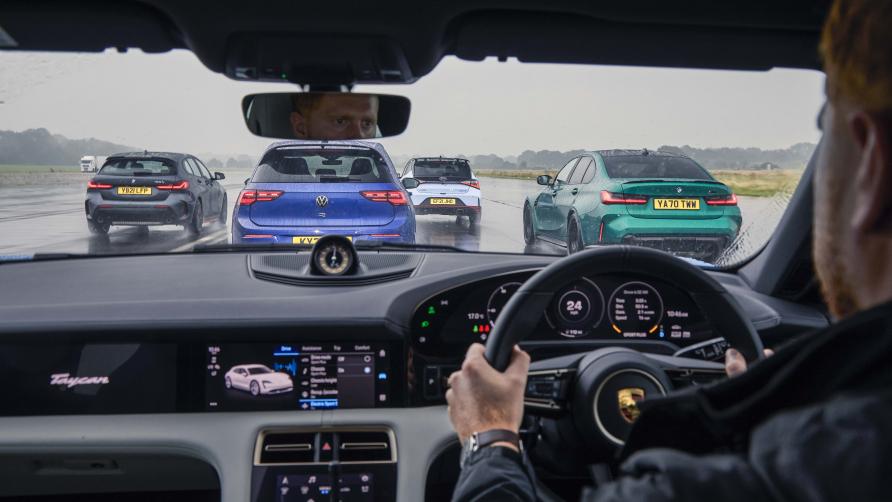 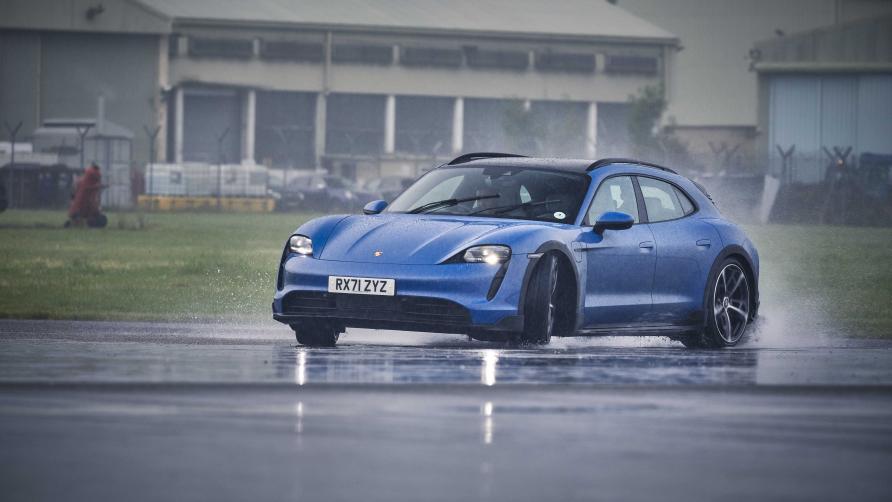 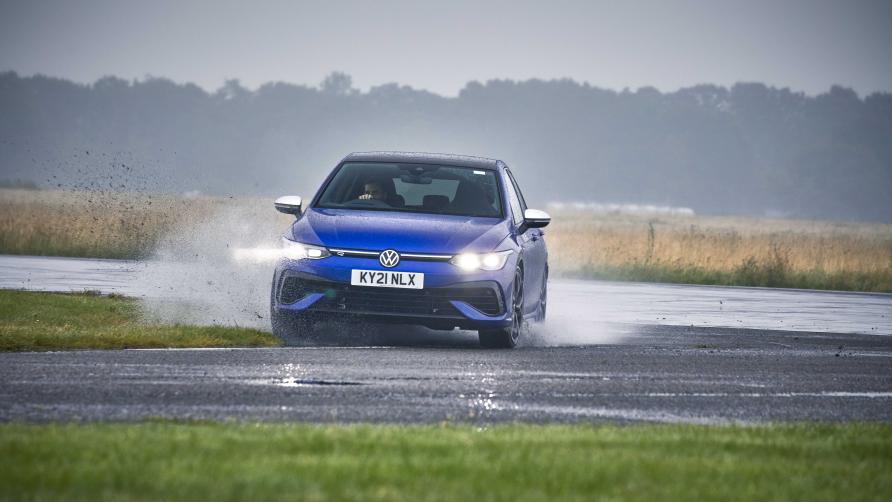 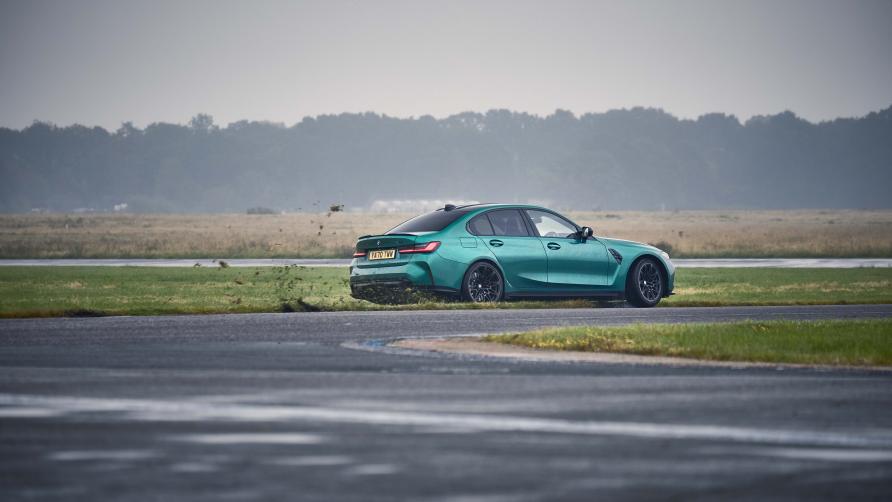 The M3’s performance proves as in-yer-face as its, um, face, at least around a greasy Dunsfold. The whole experience is tremendously... serious, the big-beaked Beemer piling on speed with reckless abandon, throttle and steering responding with frantic zeal to the scantest of attention. Everything happens very quickly. Including, I can attest, the spins. There are a lot.

If you’re after a vivid, assault-on-the-senses experience, the M3 will give you that. So will throwing yourself head first down a spiral staircase. There is doubtless a deep well of talent to be mined here (does one mine wells? Whatever) by a driver with enough time and mechanical sensibility. I have neither. To this time-poor, talent-poor schmuck, the M3 feels spiky and binary. Like, um, Sonic the Hedgehog?

Time to chill out, and regain confidence, in the Taycan Cross Turismo. Because jeez, if you want to cover ground with vast speed and minimal fuss, this is the way to do it. It’s frankly concerning to discover this ‘4S’ Taycan is only the third-fastest CT you can buy (there’s a Turbo and Turbo S further up the tree). The thorax-crushing thrust of even this mid-table version would, I fear, be borderline cruel to inflict on the family.

The acceleration is baffling enough, but it’s the Taycan’s braking that discombobulates deepest. How the Baden-Württemberg does a 2.3-tonne estate stop on a penny, from 240km/h, in the rain? I guess those lazy Susan-spec brake discs provide a clue, but whichever way, there’s something disquieting about the Taycan’s ability to camouflage its sheer heft as it hoovers its way round Hammerhead.

Not that it feels distant. The Porsche is more mechanical, more involving than any other electric car I’ve driven. OK, you’re not going to mistake it for an Elise on track, but that matters not a jot, because precisely no Taycan CT owners will take their Taycan CT on a track. What matters is, whatever sort of a muddle you get yourself into, the Taycan will somehow pull you out of it, trebucheting you toward the next obstacle on a mighty sloosh of e-torque. This is about as good as battery powered motoring gets right now. All the better that it’s wrapped up in a body shape that, if you discard the lower-body cladding – which, if you take your Taycan across a bumpy field, I suspect you will do pretty quickly – is basically an old-school station wagon. The performance estate isn’t dead. It’s just gone electric.

On the track, the Golf R remains reassuring yet distant, like an Edwardian father

If we’re talking looks, colour me a sucker for the new Golf R. It looks tremendously – what’s the word I’m looking for here? – nickable, an intoxicating blend of performance cues and practicality guaranteed to attract every car crim in a 100km radius. I mean this as the greatest of compliments. Said car crim would quickly discover that, on the road, the Golf R is, well, pretty much everything you need from a fast family car. Bountiful acceleration, immutable traction, even a hint of juicy soundtrack, which may or may not be entirely synthetic. Yes, the infotainment system is still pants, but at least here there’s some fancy quilting and blue lighting to distract you.

And when you get the Golf R on track, then wow, do things get... yeah, surprisingly boring, actually. Sure, it wears its 316bhp lightly, and bangs out lap times of a speed and consistency to flatter its driver. But it never gives the sense it wants to involve the driver in that process, particularly. That much-vaunted Drift Mode turns out to be a second or two of digital oversteer before forcing you back into line. (Extensive research reveals the only way to force the R to hold a proper steady state skid is to keep the throttle pinned flat while executing a violent 90° change in direction at 130km/h. Though unquestionably entertaining, this is probably not a viable tactic in everyday driving.) On the track, the Golf R remains reassuring yet distant, like an Edwardian father.

Same story with the 128ti. Banging on the road, bit vanilla on the track. This might sound an absurd thing to say about a 261bhp front-driven hatch, but it could use a chunk more power. I’d hoped the 1er would feel like a big Mini (by which I mean a bigger version of the three-door Mini, not a Countryman). But it doesn’t feel like a big Mini, or even a small M3. It feels like a slightly less 4WD Golf R.

You could argue it’s unfair to ask a hot hatch to feel anything other than out of its depth on circuit. Until, that is, you drive the Hyundai i20N. What a ripsnorter this thing is, truffle-hounding its way merrily from corner to corner like no one’s explained to it hot hatches aren’t meant to be this giddily entertaining nowadays. Where the 128ti and Golf R default to early onset understeer as you bung them into a tight corner, the i20N somehow clings on, loading up all its tyres to pivot you round. I do not understand the subtleties of its chassis dynamics that make this possible. I simply know it is very nice.

Of course you can pick holes. From certain angles, the i20’s styling is less than delicate. The 1.6-litre four-pot doesn’t gain or shed revs quite so readily as I’d wish. And on the road it’s maybe a mite hard-sprung. But, depending which side of the Atlantic you’re on, I could, or indeed couldn’t, care less. After 20 minutes biffing the i20N around Dunsfold, I was on the Hyundai website researching finance deals (conclusion: worryingly tempting if you can lay down a decent deposit).

But the i20N isn’t just great for the price. It’s great, full stop. More than any of the other cars in this group, it’s the one you’d relish driving every day, whether it’s the Nordschleife, or nursery drop-off. What more could you ask of a fast family car? Well, apart from decent Isofix... 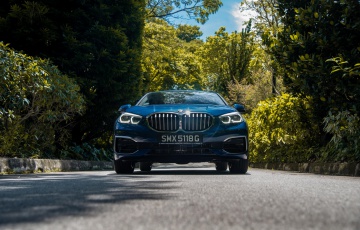 How does the F40 BMW 116i fare in terms of fun and sheer driving pleasure with three cylinders and less than 130 horsepower?