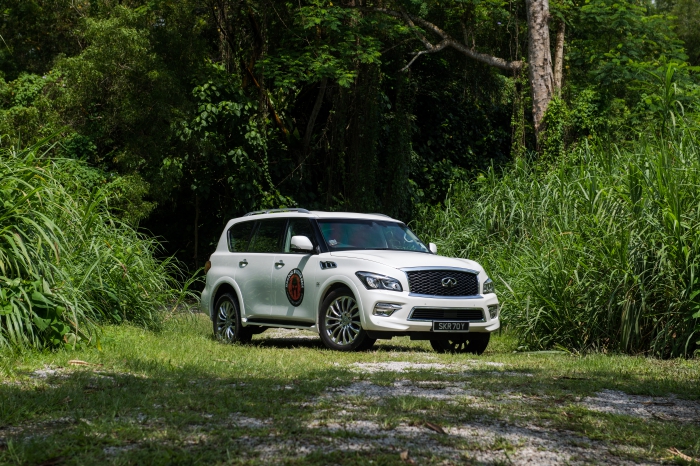 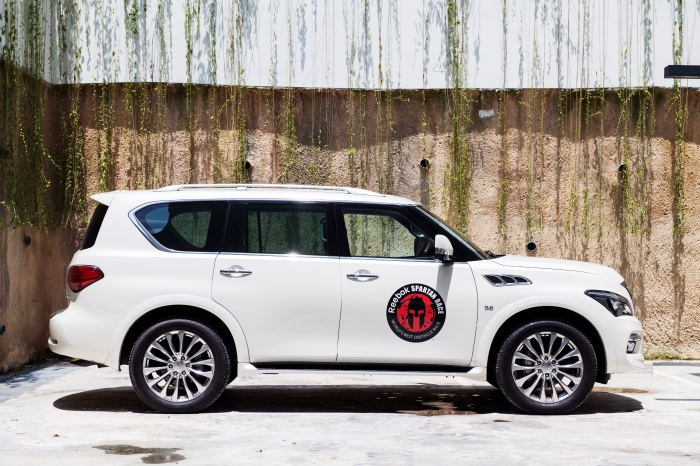 SINGAPORE – Modern SUVs are blending into a uniform ‘grey’. Every brand has a few crossover-types that offer no more than their sedan counterparts other than a higher seating position.

In fact, SUVs these days are so much like sedans there is no longer any excitement in going for one as a lifestyle choice; it’s become the practical choice, like an MPV. SUVs have become so mainstream that the charm of owning one has all been but eroded.

And that’s exactly why a great white like this QX80 helps bring back some of the romance of owning a big SUV (although we’re told it better resembles Bailey, the beluga whale from Finding Dory).

The QX80 is the biggest SUV from Infiniti, and is as much a leviathan in person as it is in pictures. Even the considerably sized Audi Q7 is only classified as a Mid-Size SUV in America, whereas the QX80 is the full-sized BIG KAHUNA. 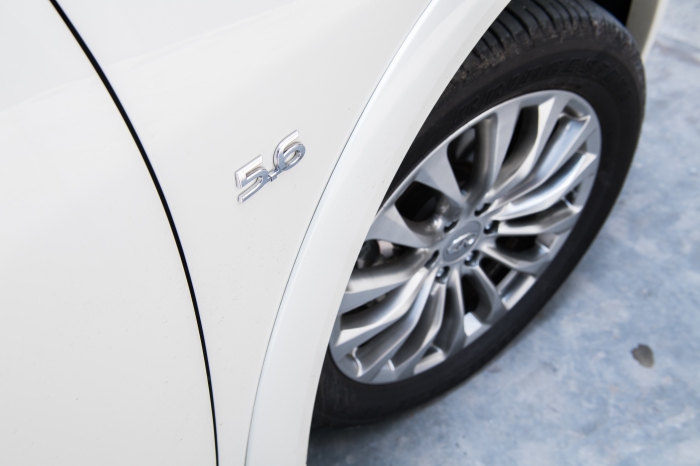 If you’re thinking that such grandiose proportions and a rorty big V8 no longer have a place on our roads, you’ve been suitably brainwashed by the green brigade. 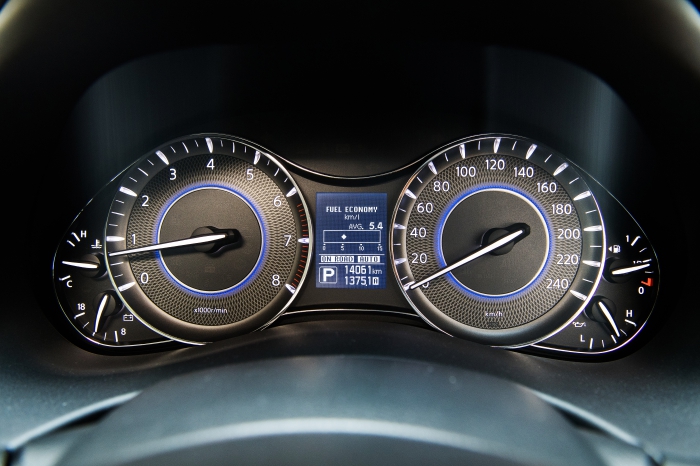 With all the engine downsizing and forced induction going on, it’s refreshing to see a large nat-asp engine in an equally large car, which in turn returns a truckload of personality. Initially designed only for the US market, this version that we get in Singapore hails from Yokohama – kind of like a USDA Prime Wagyu sirloin steak. (ed: What do you know? You don’t eat beef!) 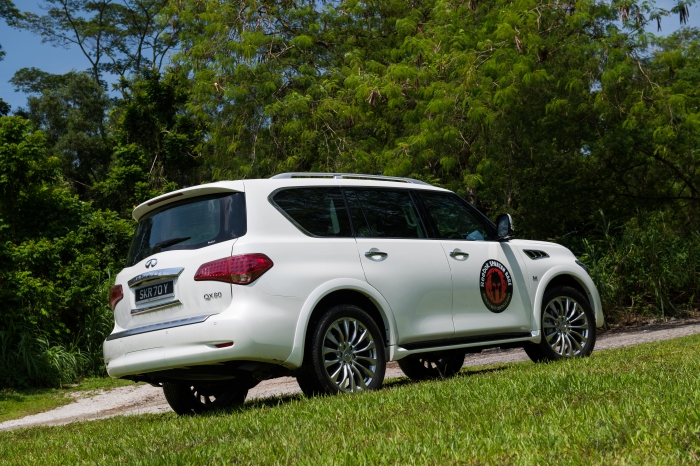 From the outside, this imposing beast is bigger, brasher and louder than any of its luxury counterparts. The posh trim tries to add a little sophistication, but it reminds me of Tarzan in a tailored suit. Its serious hulking presence demands respect, and other road-users willingly give way when they see this behemoth bearing down on them. 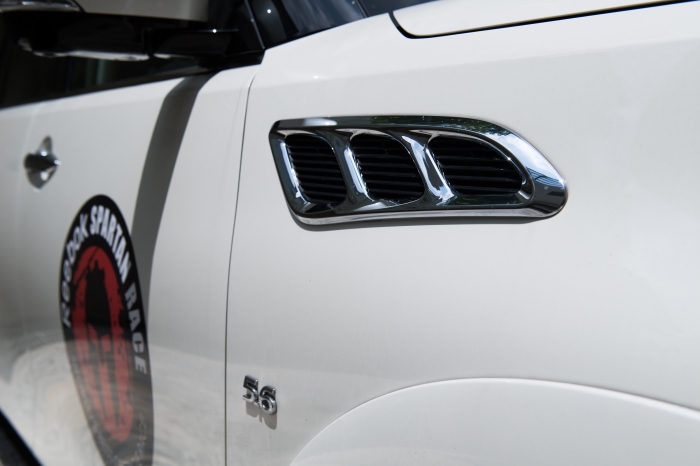 The front end of the QX80 polarises opinions, but everyone agrees it is intimidating. If Jurassic Park had used the QX80, we wouldn’t have had much of a T-Rex scene, because the face of this SUV would have intimidated the dinosaur into extinction. 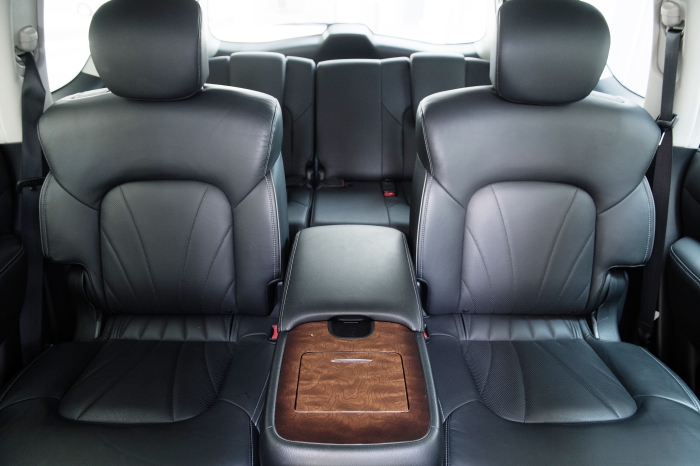 The experience from within the cabin is surprisingly docile, as the warm interior is as welcoming as an old world gentlemen’s lounge – it’s amazingly spacious and covered entirely with sumptuous leather; every seat is plush and feels like a La-Z-Boy recliner, with the wood inlay adding to the ambience. Topped-off with a great Bose sound system, one feel swaddled from the harshness of the outside. 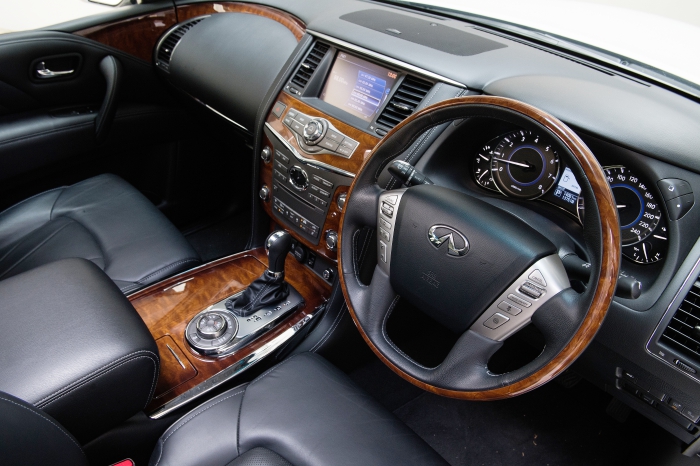 From the seating position, you are literally looking down on every other cars. It’s even more hilarious when you’re sitting eye-to-eye with a public bus driver. We even managed to lord it over a Rolls-Royce Wraith when it pulled up alongside.

The biggest downside of being so big becomes clear when navigating an underground carpark – you always feel like you’re going to hit something. Luckily there’s a complement of 360º parking cameras as standard. 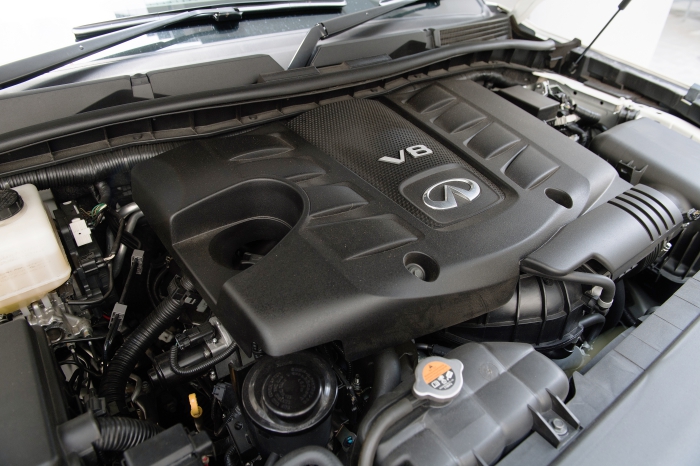 The hulking 5.6-litre V8’s power delivery is perfect for the QX80, as the Kung Fu Panda gracefully tiptoes through traffic. It punches from low-down, with prodigious low to mid-range acceleration. However, we have to pretend not to notice the fuel gauge inching ever towards ‘E’ with each prod of the gas pedal though...

There isn’t a direct rival to the QX80, which has proven to be a real beast in the city. Other SUVs that match it in terms of size or luxury cost about twice as much, which makes the QX80 a value proposition. I doubt we would find anyone boring driving one… 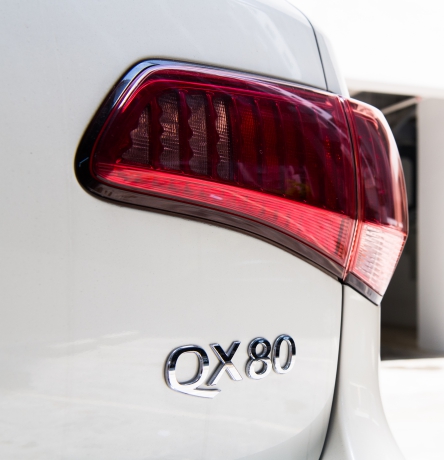 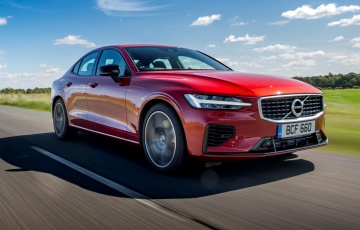