Jeremy on his daughter's first car 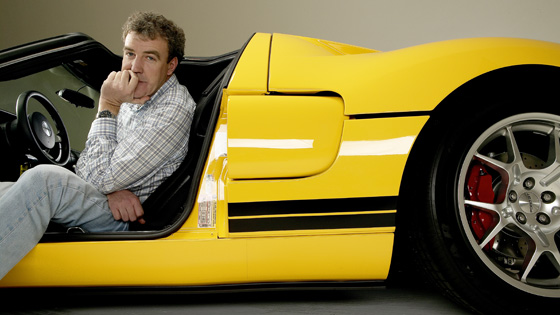 There are around 35 million vehicles on Britain's roads, whizzing hither and thither at breakneck speeds past houses, schools, old people's homes and pubs at closing time. And yet despite this, only 3,000 people are killed in road crashes every year. That's a remarkably low figure, and we should all be very proud.

I have often voiced this opinion in the past. And it always provokes a response from someone whose son is lying on a mortuary slab because some dithery old fool in a Nissan Micra left home that morning without his glasses and ploughed into the school bus.

I know, statistically, his death was inevitable. But you can't say that to someone who is hurting so badly inside that they want to die too.

You can't make a rational argument to someone who has been driven insane by grief. Someone who cannot stop crying. They want lower speed limits. More rigorous testing for the elderly. Higher speed humps. Stiffer punishments for speeders. And, if I were in their shoes, I would too.

I had a similar moment recently when my daughter turned 17 and therefore became old enough in the government's eyes to drive a car. But which one?

We have covered this subject on the television show in the past, and, of course, we were rational. Well, rational with a light garnish of flippancy.

But when it's your daughter who's about to poke her headlights into a maelstrom of the weak, the mad and the blind, you need to sit down with the spec sheets and do some proper research.

Style? Speed? Value? Handling? All the things that usually matter suddenly don't any more. All I was interested in was safety. I wanted a car with 2,000 airbags. I wanted a bouncy castle with wipers.

As you may know, the FIA runs an independent safety programme called NCAP which tests every new car and gives them a star rating. In theory, this should be jolly useful.

In practice, it isn't, because to get the maximum five stars, makers are now designing their cars to perform well in the specific tests. But accidents are always weird, unpredictable. And a car designed to stay intact when T-boned at 90 degrees might disintegrate if it's hit at 72 degrees. There's no way of knowing.

As a result of this uncertainty, I follow a very simple path. The more metal, the better. I wanted my daughter to have something absolutely enormous. A Volvo with elephantitis.

That rig they used for moving space shuttles. I wanted Lincolnshire, with wheels. And bumpers like a spoilt child's bottom lip. Sadly, you would obviously need a large engine to power such a thing, and that's where you run up against the insurance companies.

Mine said it would only really be interested in providing cover if the engine was small enough to fit in a matchbox. And that, of course, meant a small car.

So. Let's be clear on this. A man in a suit, in Norwich probably, or Frankfurt, was saying that my daughter, the most precious thing in my life, must take to the roads with no experience, in a car which has the crash protection of a carrier bag. I spent a few moments wondering what sort of noises he'd make if I pushed some cocktail sticks into his eyes.

And then I got back to business. Small cars that I felt would be suitable for my daughter. A Mini? Well, yes, except it's not small, and, as a result, even the basic models need a 1.4-litre engine to move them about. And that was too large for our friend in Norwich, or possibly Frankfurt.

There's exactly the same problem with the baby Alfa and the Honda Jazz. The Fiat 500, then. The TwinAir is a car I like enormously, and its engine is small enough to keep the insurance companies happy.

But here's the problem. You can have a Fiat 500. You can buy one for your child. Your child will like it very much. But it's my child we're talking about here, and I'm sorry, but it's just too small.

Think of it this way. If I asked you to drive into a lamp post at 80km/h, would you choose to make the trip in a Mitsubishi Warrior pickup truck or a Fiat 500? Quite.

There's a similar problem with the Toyota iQ and those mini French cars whose names I can't be bothered to look up. They're all fine if you are experienced in the ways of the road, but they are not fine when you are flustered, confused and statistically more likely to have a bump.

Eventually, after a great deal of research, I ended up settling on a Ford Fiesta. 1.2-litre engine. Tick. Bigger than most of its rivals. Tick. And, not that it really matters, better-looking, too. Not as good-looking, however, as it is now.

My daughter, like most teenagers, is not desperately interested in cars, but she does have a soft spot for a friend's Shelby Mustang.

So I ordered her new car in white and asked for it to be fitted with two blue stripes. This made it look absolutely ridiculous. It was a koala bear in a Superman outfit. A puppy dog in boxing gloves.

Actually, it looked like an albino bison on a unicycle, so, to get round that, I asked for 17-inch wheels, which have been painted white, to match the rest of the car.

Throw in the day-time running lights, from next year's model, add a roof spoiler, some side skirts and a front air dam, and the end result, though I say so myself, is absolutely effing brilliant. It's very Essex, thanks to the white stilettos, but what's wrong with that when you're 17? Nothing.

It's pretty good on the inside, too, because the Fiesta name is picked out in backlit red in the sills, and there's a satnav screen in the rear-view mirror.

But by far and away the best thing about this car is this: it is gloriously slow. In a race from 0 to 95, it would be beaten by geology. Put your foot down in fifth at 80km/h, and absolutely nothing happens.

This makes me priapic with joy.

According to the bumf, the engine produces 60 horsepower. But we are not talking stallions here. What they mean is 60 Shetland pony power. This means that overtaking anything is simply impossible.

So my daughter will be forced to drive about at the same speed as the slowest thing on the road. That'll be James May. And since he is stationary most of the time, either because he is letting someone out of a side turning or because he is lost and consulting a map, the chances of an accident are dramatically reduced.

The 1.2-litre Ford Fiesta, then, is my suggestion as the perfect car for your child. And it matters that you pay attention, because it's your child we're talking about. And nothing is more important than that.