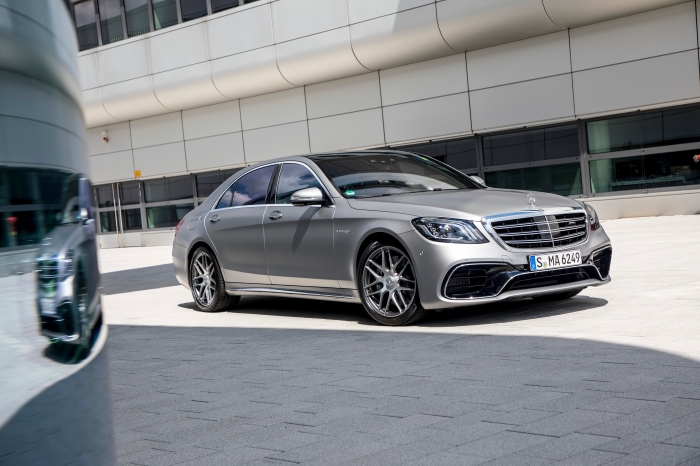 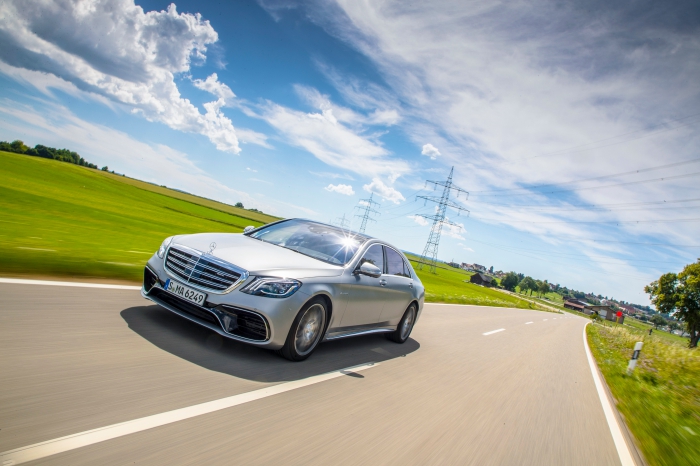 Neuhausen ob Eck, Germany – Seeing the powerful new grille of the facelifted W222 S-Class with Multi LED headlamps and ‘triple-torch’ accents ablaze rapidly filling your rearview mirror is enough to make most folks blanch in alarm and scuttle aside to let the large limo pass.

The more civilised S 560 will probably waft by sedately, apologetically even, but less so our belligerent S 63 4Matic+, which will blitz past and pull away with a bellow and enough turbulence in its wake to rattle your windows and shake your dentures loose. 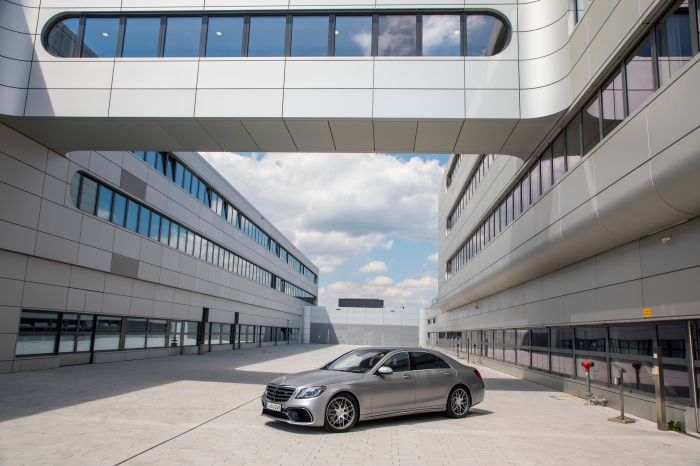 Apart from the new grille and headlight clusters, the S 63 gets an AMG-specific front apron with a distinctive and functional ‘jet-wing’ element and large side intakes reminiscent of the AMG GT R. The three-dimensional effect of the front splitter isn’t just for show either, because it reduces lift at the front axle.
For such express cruisers like the S 63 and Alpina B7 that are intended to cover a lot of ground quickly, reducing lift is a preferred solution, as opposed to increasing downforce, because the latter creates drag and has a negative impact on top speed and fuel economy. 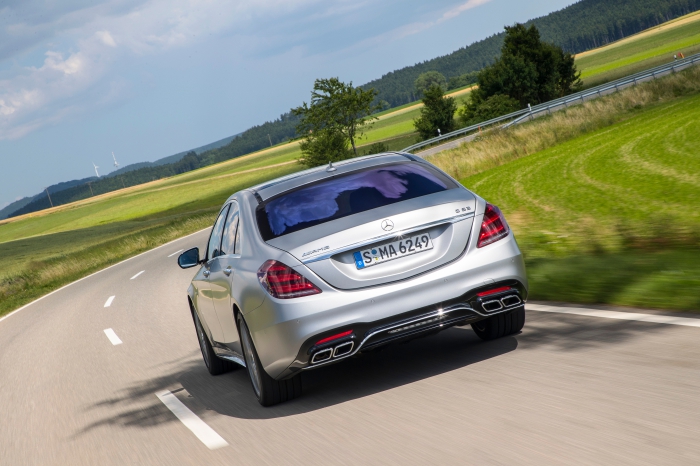 Traditionally, although such super-limos were capable of delivering fabulous cross-country pace, they had a tendency to balk the moment you hit the winding roads, because the combination of comfortable suspension and leisurely, full-fat torque band does not translate to the most engaging dynamics – think cruise ship responses versus an agile speedboat and you won’t be too far off!
Like the S 560 we tried, the S 63 comes with the next evolution of autonomous driving aids, which includes an intelligent cruise control that will negotiate bends and junctions by accessing the navigated route, as well as safety systems to e-brake/slow down the car to avoid hitting a pedestrian/vehicle – so you know what mode to leave it in when your chauffeur is at the wheel! 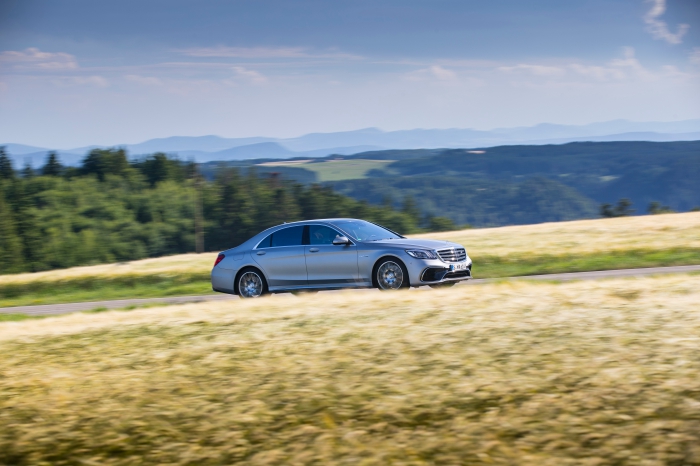 Happily for petrolheads, the segment for sporty lux-limos has really burgeoned, with the various contenders from the genre upping the ante as far as dynamic handling is concerned.
We were blown away on both road and track by the M760Li xDrive, a stealthy performer with a stonking V12 under its bonnet, primarily because it defied our expectations.
Likewise, the other contenders in this segment – such as the B7, Panamera Turbo S e-Hybrid and this S 63 – demonstrate that being big doesn’t automatically translate to having a hard fall. However, does a high-performance lux-limo have a place on the roads? There are detractors who comment on the incongruity of having a lux-limo possess the firepower of a sporting machine. Well, “more power to these Q-cars!” we say. 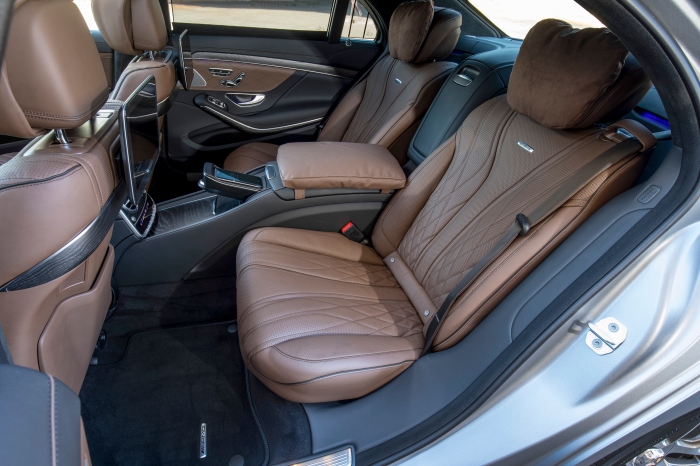 Moreover, not everybody is looking for the evidence of conspicuous consumption associated with a Bentley or baby Rolls, especially if the owners want to keep a low profile and/or expect to make frequent trips into Malaysia.
The performance quotient of cars like the S 63 is not only familiar to these buyers (who often have other sportscars in the garage), but more importantly, gives them an escape instrument if the unsavoury come sniffing and need to be shown a clean set of heels.
After all, 3.5secs from 0-100km/h and a potential 300km/h vmax with the optional AMG Driver’s Package are nothing to sniff at… 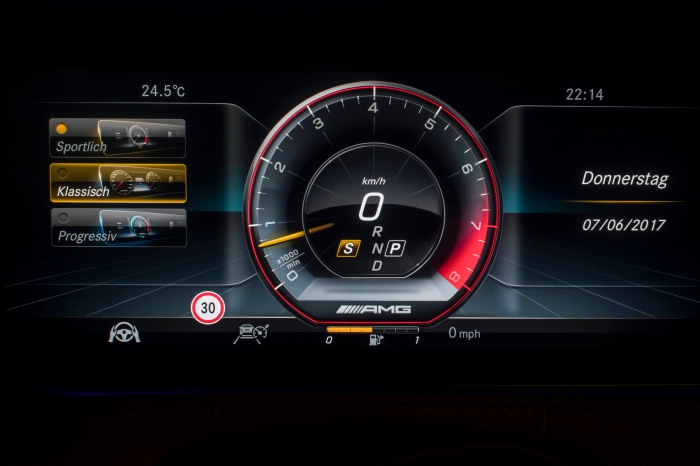 It’s amazing how a new powertrain can transform a car’s personality. Compared to the leisurely, or some might say, “borderline-lazy” 5.5-litre V8 matched to the 7spd auto in the pre-facelift S 63, the ‘new’ car is animated by a rowdy and rambunctious biturbo 4.0-litre V8 with responsive twin-scroll turbos mated to a swift and sharp-shifting 9spd auto, with drive sent to a trick 4Matic+ variable all-wheel drivetrain capable of operating in either all-wheel or full rear-drive mode. Despite the downsized engine capacity, power and torque are up compared to its predecessor’s, but without a corresponding penalty in terms of fuel consumption thanks in part to the 9spd and cylinder deactivation system that will see the engine operate as a four-cylinder under partial load. 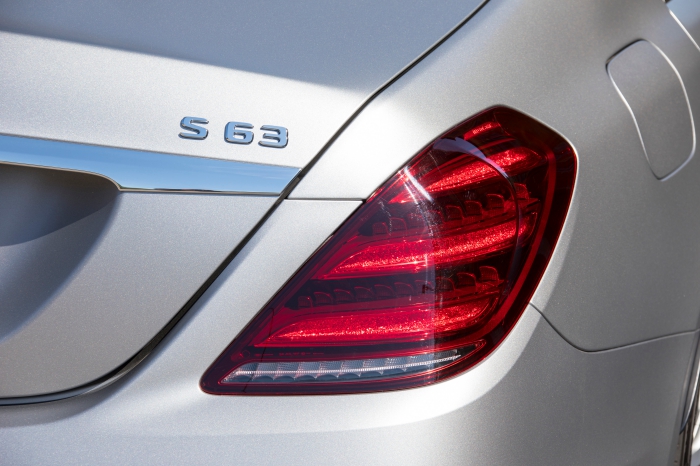 If this all sounds familiar, it’s because the S 63 inherits the powertrain from the E 63 S that we drove some months ago – AWD inspires confidence in slippery driving conditions, but the drivetrain is also fully variable to become RWD for rear-drive shenanigans, or in other words, the driver gets to enjoy the best of all worlds. In fact, the 4Matic+ is exactly what you’ll want with 900Nm and a two-tonne kerbweight uber-limo, so it’s a huge pity the right-hand-drive S 63s will not get it. Having said that, despite the facelift W222’s fresh looks and impressive new technology, it’s still based on an older 2014 platform, so the situation should change when the new model S-Class eventually breaks cover – remember that the last generation E 63 S was also only available in right-hand-drive as RWD, despite the rest of the world getting it in 4Matic. Apart from the new powertrain, the S 63 gets the same uninterrupted dual TFT displays as the E 63 (the pre-facelift has a cluster of buttons in-between its two screens) for the full Widescreen Cockpit effect, as well as AMG Dynamic Select (this was absent on the pre-facelift S 63 variants), which lets you toggle between various drive programmes: Individual, Comfort, Sport, Sport+. If you’re wondering “why?”, the reality is ownership age is dropping into the mid-40s for such cars, so no one double-takes if you’re spotted ‘self-driving’ one of these limos, especially if you’re driving it hard, which you’ll want to be in Sport+ for. Furthermore, in the event a chauffeur is serving driving duty, you can leave it in Comfort to be driven around in the S-Class’s legendary plush luxury.
Read About The 'Final Edition' Of The V12-engined S65...Boo!
Makes the pre-facelift 5.5-litre V8 sound like a baby!
However, I reckon it’s only under extreme duress, like a traffic gridlock or if you’re really tired, that you wouldn’t self-drive. After all, why wouldn’t you, when there’s a whole barrage of fireworks waiting to be unleashed at your right-foot’s command?
Given the S-Class’s hermetic levels of insulation, there’s no real way of enjoying the V8’s burly soundtrack except from the outside, so don’t be fooled into thinking the S 63 is a docile wallflower, because it isn’t… not by any stretch of the imagination, unless you’re referring to its commodious stretch limo credentials. The 4.0-litre V8 may be a downsized engine, but it’s upsized in performance and charisma with a larger-than-life personality. It’s easily roused to fury and raring to go all the time, especially with the epic 900Nm available from under 2800rpm. The biturbo 5.5 V8 on the pre-facelift 63 made an identical 900Nm some 500rpm lower down the rev band, but this smaller engine offers a far more explosive and involving delivery. However, it’s not merely a blunt hammer used to bludgeon highways into submission, because it will also tackle the corners with the eagerness of a hunting hound on the scent. The S 63 can be piloted with surprising steering accuracy, with the lightweight ceramic composite brakes offering confidence-inspiring stopping power with enough sensitivity to modulate yet not too much as to be grabby. Cars in this class tend to be plagued by weight issues, but the S 63 boasts AMG Lightweight Performance measures that help save up to 50kg. Forged rims, a lithium-ion starter battery, a spare tyre recess made of carbon and the carbon-ceramic brakes help bring the weight ‘down’ to just under two-tonnes to achieve good agility.
This means the car is able to keep up with the swift direction changes required when tackling the mountain passes, while a stomp of the ‘loud’ pedal unleashes the full 900Nm that will spit you out from one corner to the next with effortless nonchalance. The best disguise is to hide in plain sight, and the sound and speed are so incongruous with the S-Class’ appearance that it never attracts undue attention. Don’t be fooled by its sophisticated demeanour, because this is a through and through hooligan that only an AMG thoroughbred can be, and it’ll shred through its sharp-suit and rear tyres in less time than it’ll take you to say Sonderklasse.
PHOTOS Mercedes-AMG Merc's built half a million W222-gen S-Classes, but the history of the Big Benz is a long one