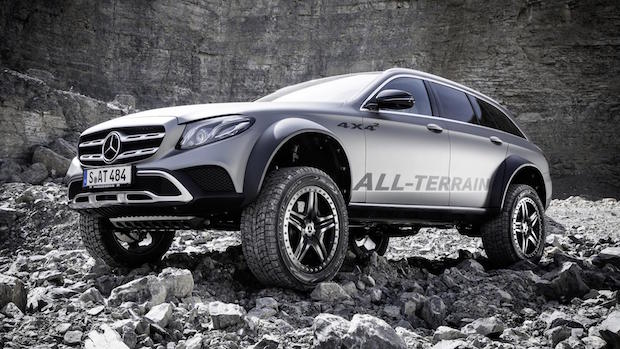 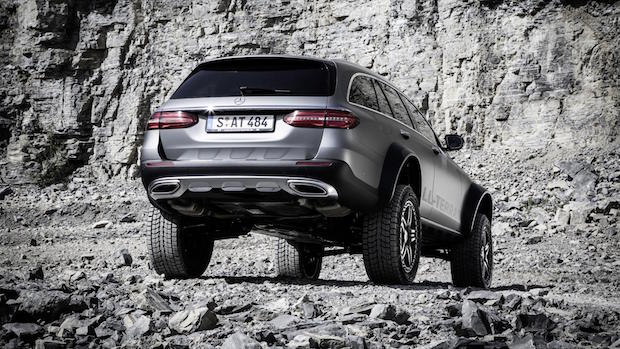 It’s a Mercedes-Benz E-Class All-Terrain given the almost-familiar ‘4x4²’ treatment. Which, in case you didn’t notice the G-Wagen 4x4², means portal axles and more stance than is comfortable when parking.

The brainchild of Merc engineer and off-road enthusiast Jürgen Eberle, the giant E-AT² (I just made up that acronym, but it sound like a Star Wars droid, so I’m keeping it), is basically what it looks like: an E400 E-Class All-Terrain that’s had its suspension re-designed to take a set of portals.

Now, a portal axle is a serious - and expensive - bit of off-road kit that suspends a gearset inside a hub that attaches to the wheel. That means that the wheel centres don’t have to be in-line with the diff, so you can tuck all the dangly bits away (good for serious off-road) and have clear air between the wheels. 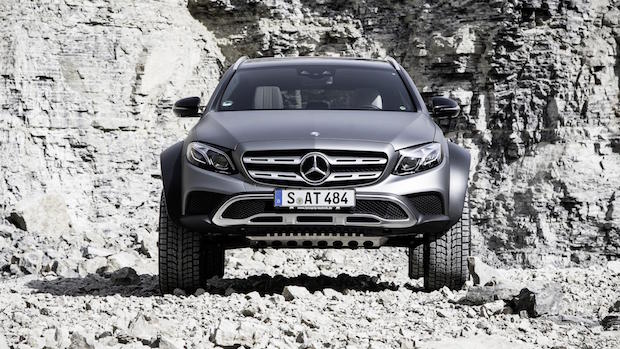 The tracks are wider - the car has 200mm more girth than a standard car - and covered by 3D-printed arches, originally manufactured in three sections and then formed up together. Wheels are nicked from the R-Class SUV… thing… and shod with 285/50/R20s, which means that when coupled with the All-Terrain’s air suspension, you get a seriously jacked up semi-monster.

The necessary mods to carry the portal axles included Jürgen sorting out new mounting points and subframes for the multi-link suspension, tweaking the rear axle carrier and then messing with the axle kinematics to stop the whole thing falling over at first sight of a corner. The rest is standard E - and I do mean standard: the whole car is functioning and proper inside, with all the usual bells’n’whistles.

What’s interesting here is that an engineer from a different department (Jürgen’s actual engineering responsibility at Mercedes is the packaging of the front end of the E-Class - making it all fit, basically), has been given the opportunity to cut a little loose. He looked at the G-Wagen 4x4²’s portal axles, chewed a pencil for a bit and went ‘hmmmm, I wonder?’. 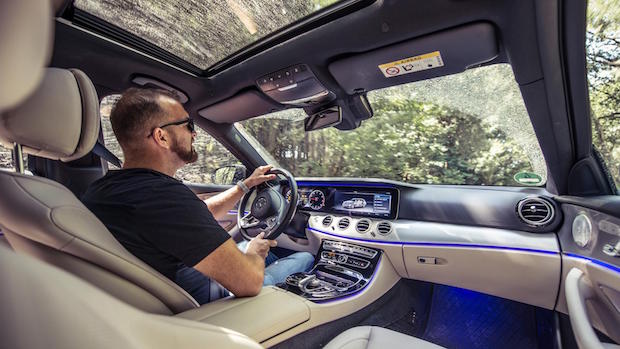 Apparently he just asked whether he could have a go, and the Daimler bosses said yes. After a bit more conversation, it turns out that he pitched the idea with actual technical specs and a proper design brief - he’s an engineer, so is basically an artist, but with CAD - but Merc simply let a small group of enthusiastic and similarly-minded boffins have a crack at it.

So a little skunkworks team prototyped some bits, 3D printed some other bits, welded a few custom subframes to Jürgen’s specs and the E-AT² was born. This is good. Some of the best cars ever invented came from groups of engineer’s out-of-hours projects.

So you were expecting a tippy-toed prototype? Yup, me too, but the E-AT² basically feels like a production car. It’s so well-sorted, that if I didn’t know better, I’d be wondering whether Merc was planning a small production run of these things, for fans of the deliberately weird.

Yes, it’s a bit of a finagle to jump up into it - saloon cars have too-small apertures when you’re getting up into them rather than down - and it’s definitely strange to be levitating so far off the ground in what feels like a standard E-Class inside, but other than that, it’s brilliant. 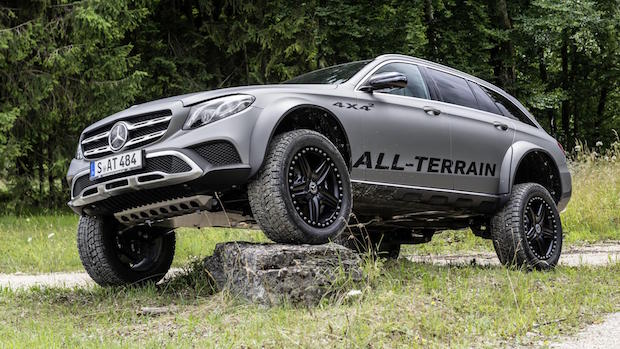 The portal axles haven’t got reduction gears (you can change the gear ratios in portal axles to give incredible crawling ability), and are set as 1:1, meaning that the E-AT² performs pretty much like an E400, except taller. The 9spd auto gearbox runs smoothly and without a hitch, the steering is light and precise, the brakes more than strong enough, and without the snatch you sometimes get with cars with over-sized wheels and tyres.

The turning circle is pretty much the same, nothing rubs or grinds, articulation is pretty good. And with the tyres and ground clearance, it’s unstoppable off-road. On this car there’s no ABS or lockable differential system, so you have to pick a line and not get cross-axled, but I tried quite hard to get it stuck, and only felt like it would if you got it on a massive lateral ridge the wrong way.

Jürgen says that getting a new electronics package would sort all that - it would be relatively simple to give the E-AT² an electronic diff set (re-directing power and checking spinning wheels with ABS) with some decent programming, but it wasn’t cost appropriate on a prototype. 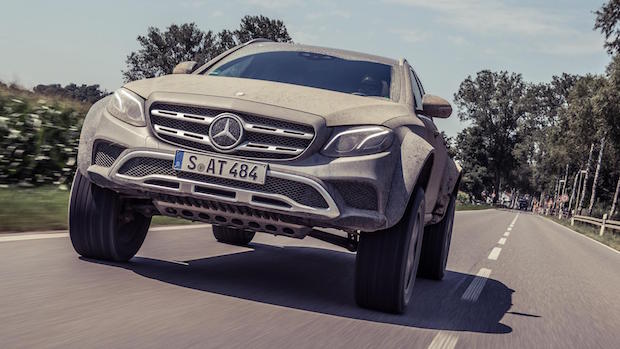 On road, it’s hell to place. Mainly because the extra height means you can’t really see the corners of the car, but also because it’s very wide at 2.10 metres, and that extra width is all in the arches, so you have to be extremely careful with your spatial awareness. Parking it in the local supermarket was… interesting.

The tyres howl a bit at speed, but other than that, again, the car feels spectacularly sorted: it rides, handles and stops pretty much as you’d expect. No, it’s not a sports car, but body control is good, grip is readily available and there are no wobbles or wayward dynamics - like I said, it feels like a production car. You can tell it’s built by engineers rather than dreamers, mind. Or maybe it’s actually built by a little bit of both. And it’s hoot to watch people’s reactions - street presence in spades. 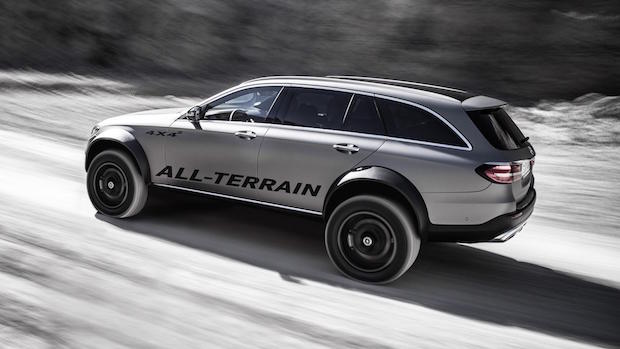 This is the bit that’s possibly the most confusing and convincing at the same time; the E-AT² is ‘just’ an E-Class All-Terrain inside. And it all works. So you can choose from the five different settings from the Air Body Control air suspension, pick the ‘All-Terrain’ setting and simply crack on.

The massaging seats work, the air con works, it has sat nav - though possibly not for some of the places the E-AT² is now capable of getting to. The only strange thing is the fact that its a foot higher than you’re used to. After driving it on and off-road for a full day, you get quite used to it. 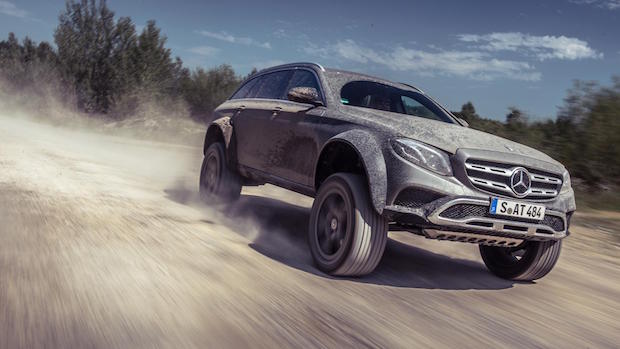 You can’t buy one. But I’m going out on a limb and saying that I think Mercedes will probably do a limited run of these. It’s fun, a little silly, but makes sort of sense when you drive it. The only thing it’s lacking is a full suite of electronic helpers, but that’s more of a time pressure thing than a real engineering issue.

It looks a little bit nuts, and as Jürgen points out, it’s an excellent advertisement for Mercedes Benz in terms of recruitment of engineering talent. After all, who wouldn’t want to work for a company with this level of resource that’s willing to let the odd mad project take flight? I could definitely see a few charging about in dunes in Dubai, or - unfortunately more likely - landlocked in Kensington…

Thoroughly engineered flight-of-fantasy that feels suspiciously like it might be another limited-run bit of fun from Mercedes. There’s nothing wrong with that.

"It’s fun, it's a little silly, but makes sort of sense when you drive it." 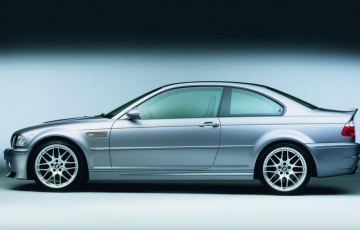 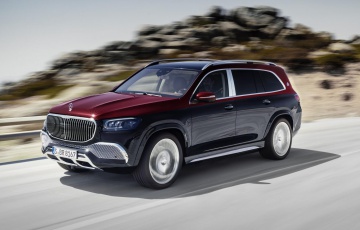 Kneel, peasants, before the might of the Maybach GLS 600 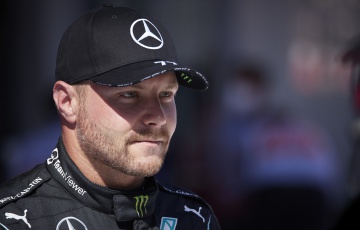