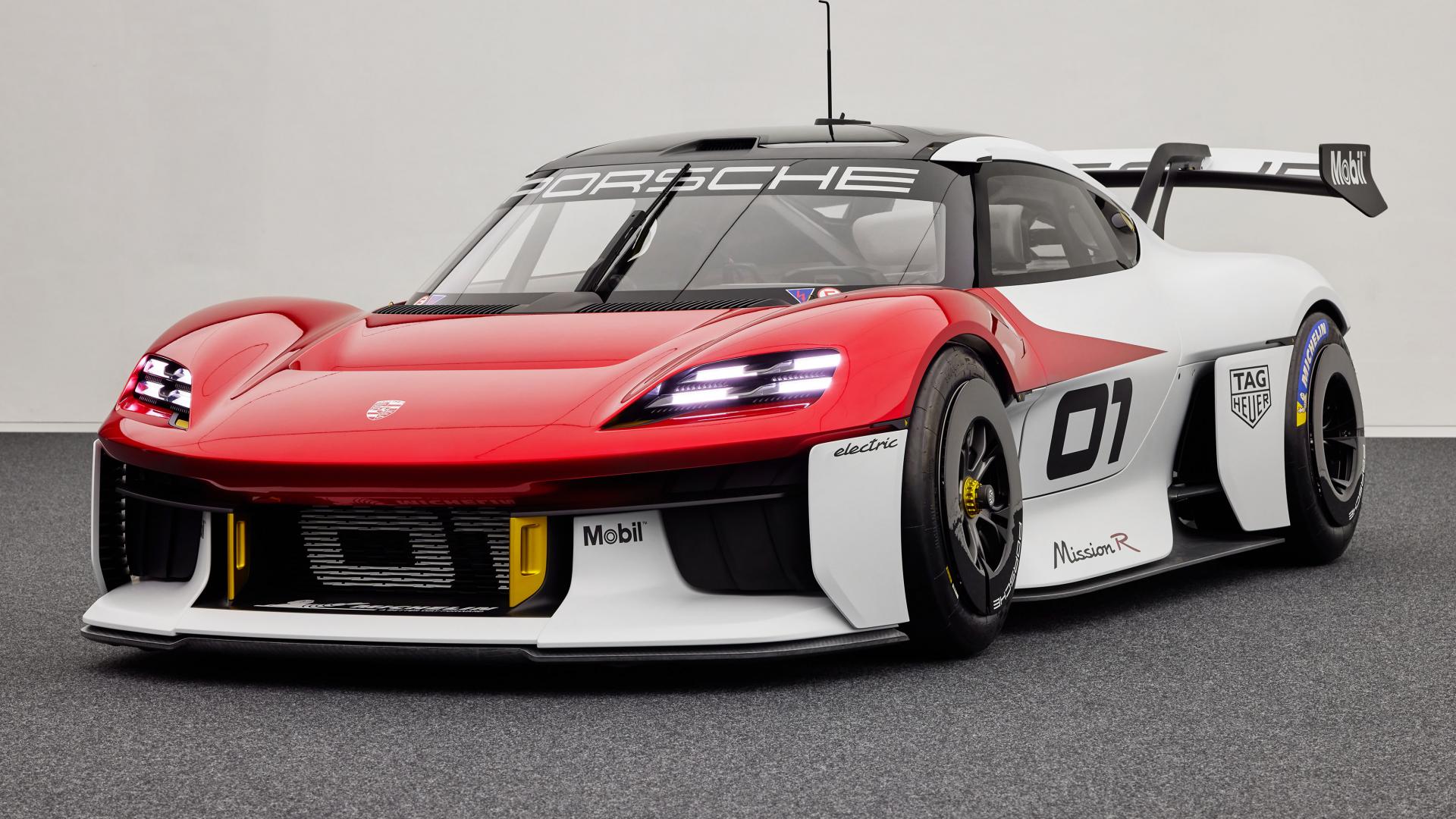 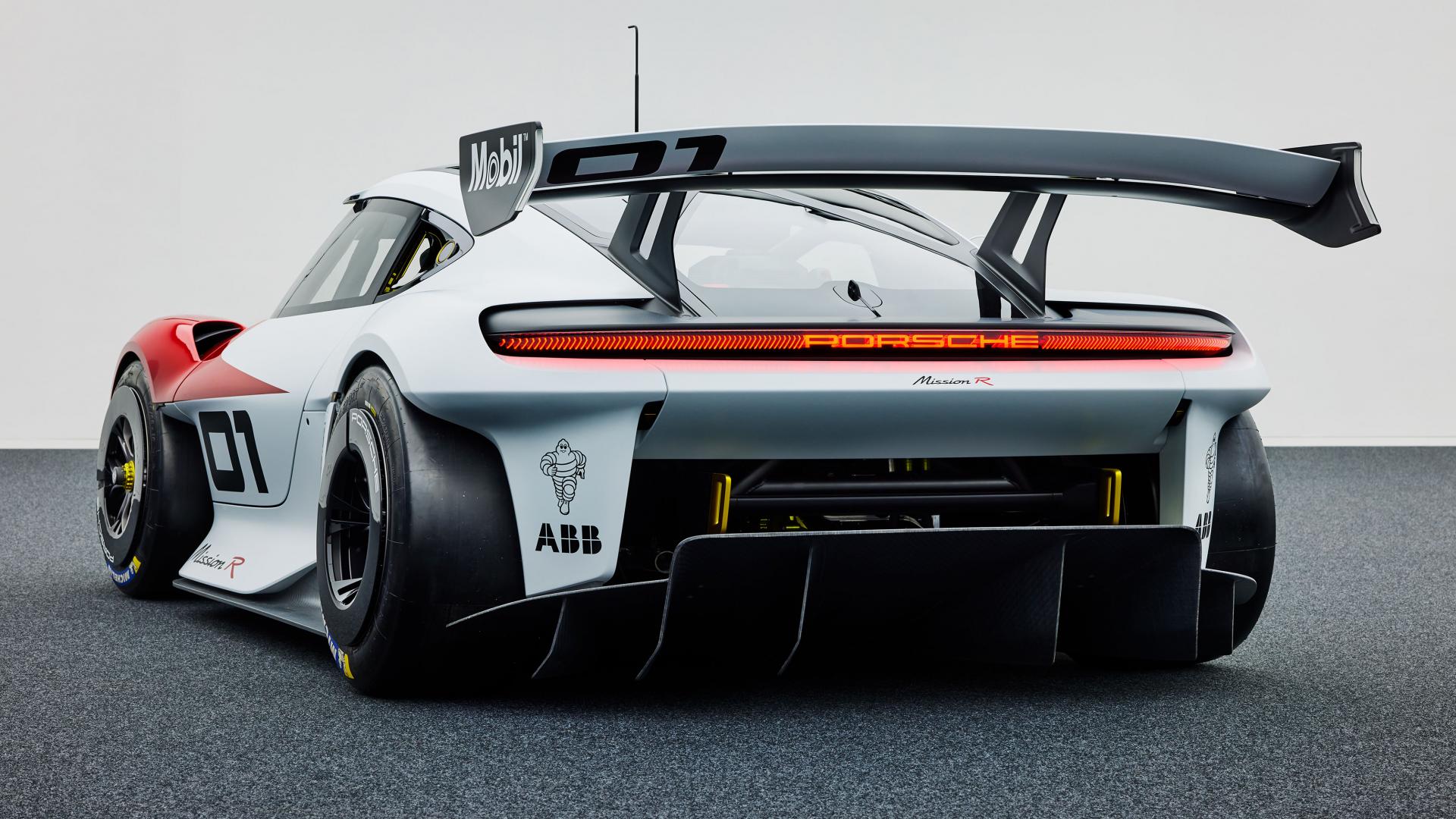 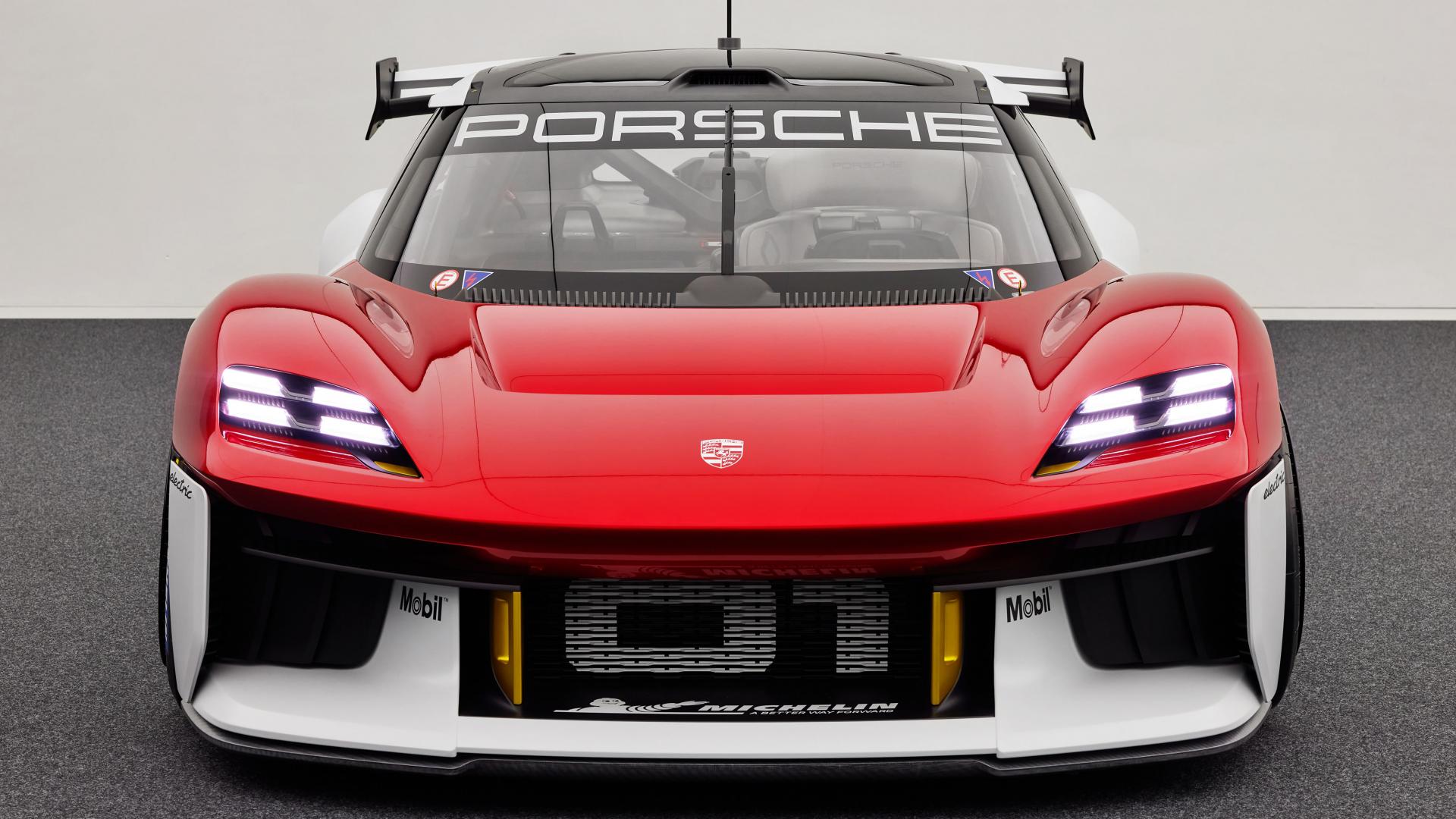 Porsche is planning on its own customer electric race series from 2025. And this is the concept for the car: the Mission R.

Well, you might have expected as much from the makers of the Taycan, competitor in Formula E and LMP1 hybrids.

The Mission R makes no excuses. No need for short races, or battery swaps. They say it'll do the equivalent length race to a 911 Carrera Cup round, which is 30 or 40 minutes depending on the type of circuit. And the lap times will be faster, matching the current 911 GT3 Cup.

They won't spend long plugged-in in the pitlane. Battery recharge time to 80 per cent is just 15 minutes, using a special 350kW charge unit each team would take to the track. That's basically a second huge battery. The car equivalent of a mobile phone power bank, if you like. 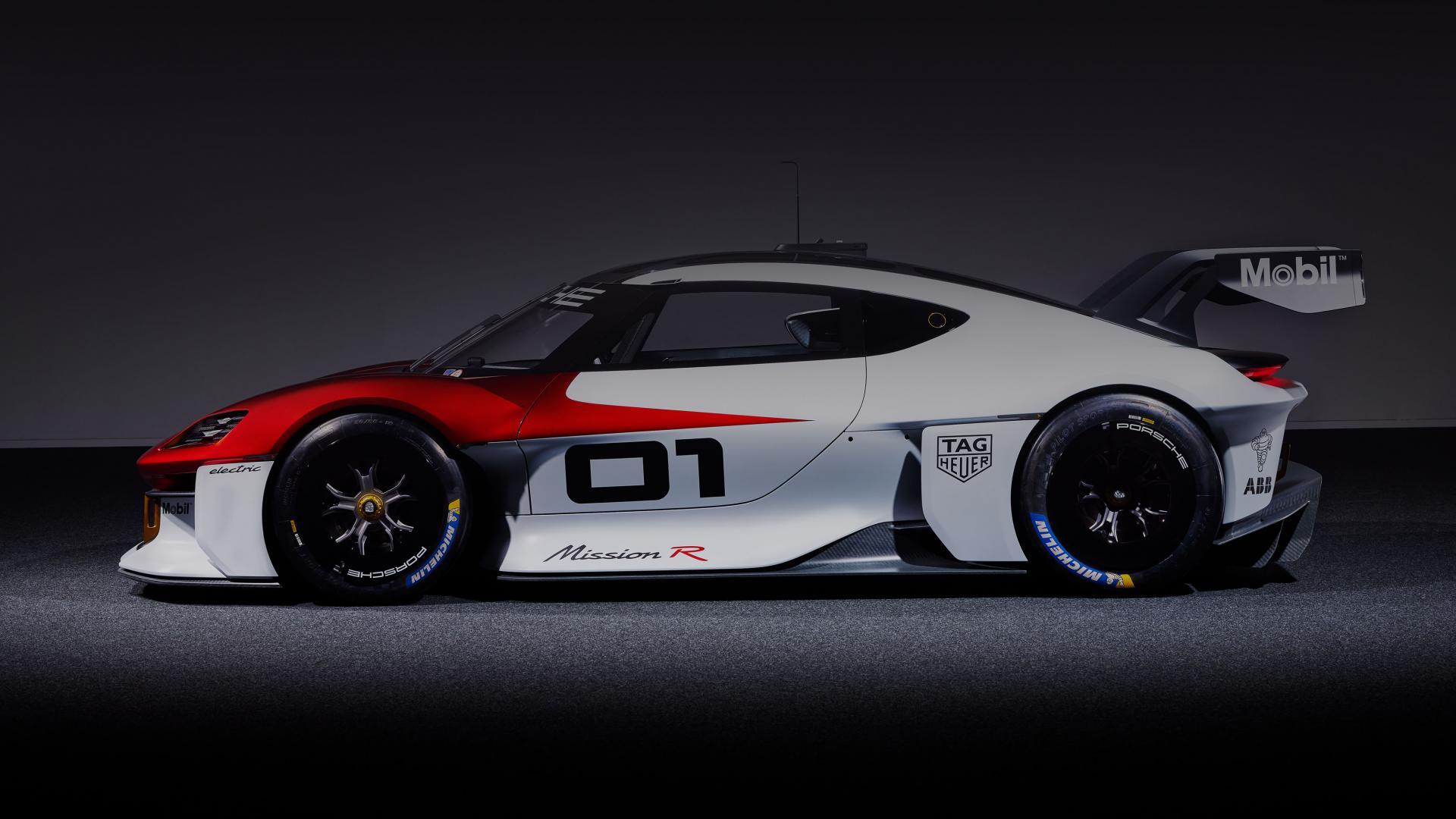 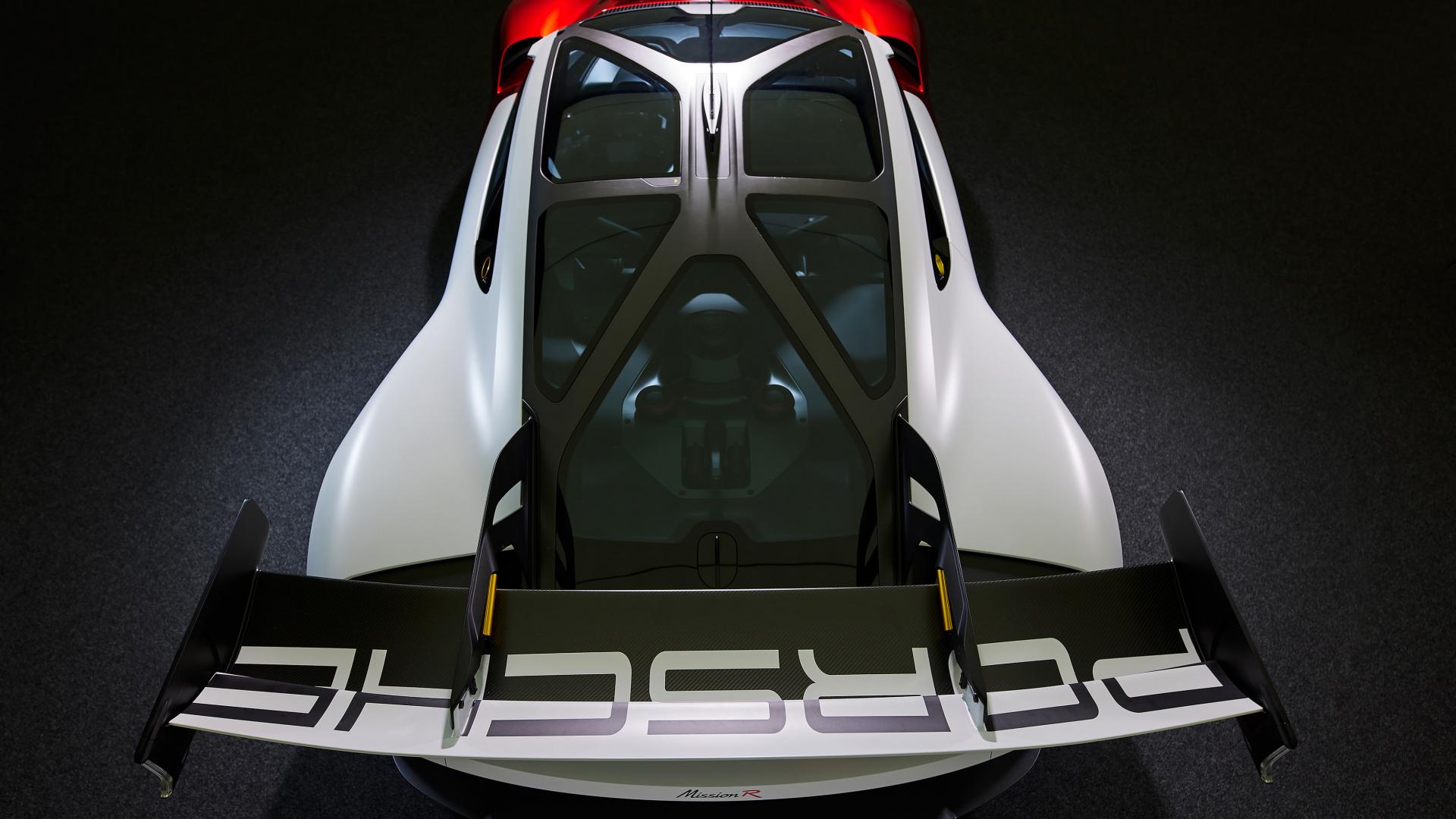 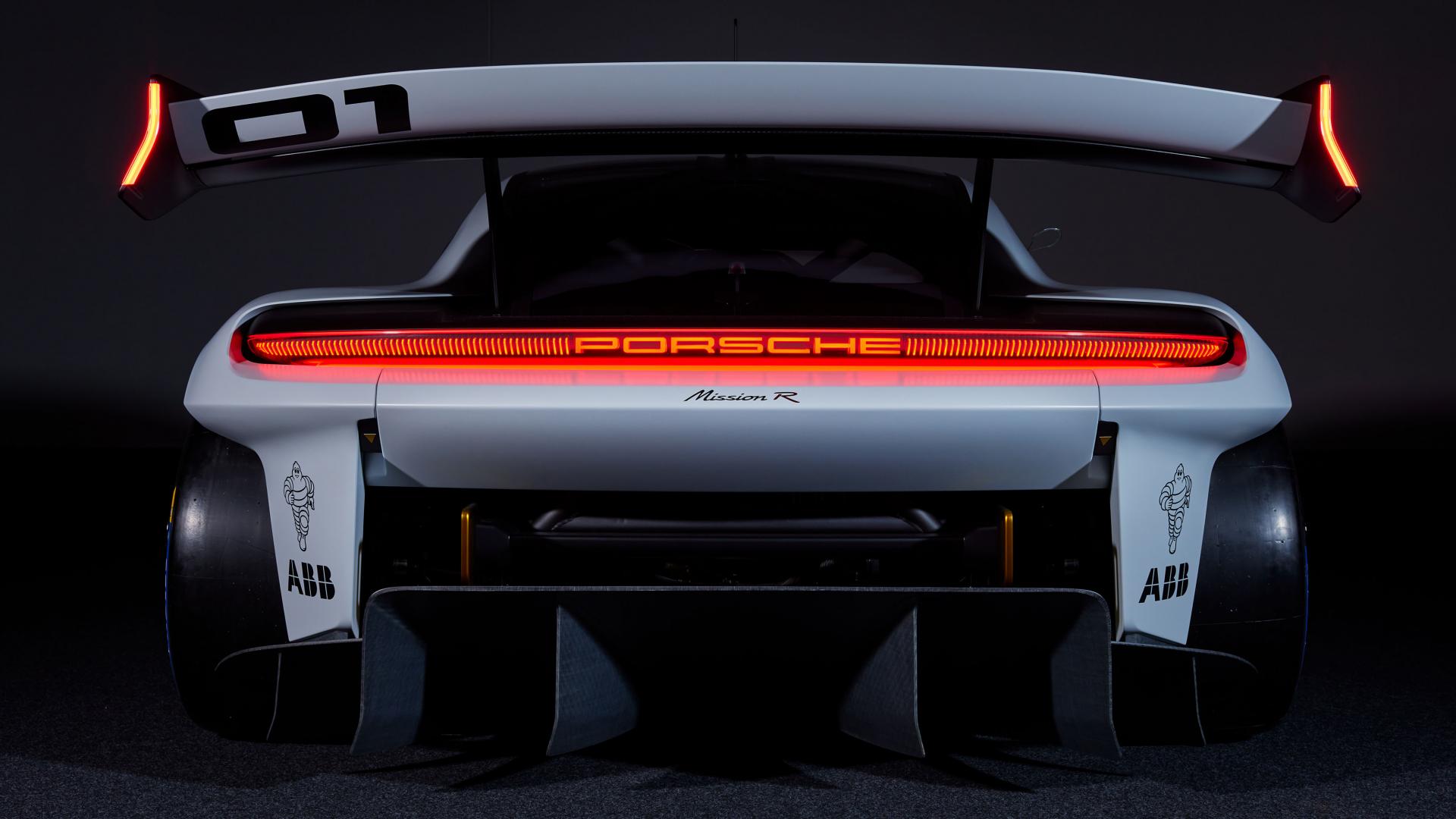 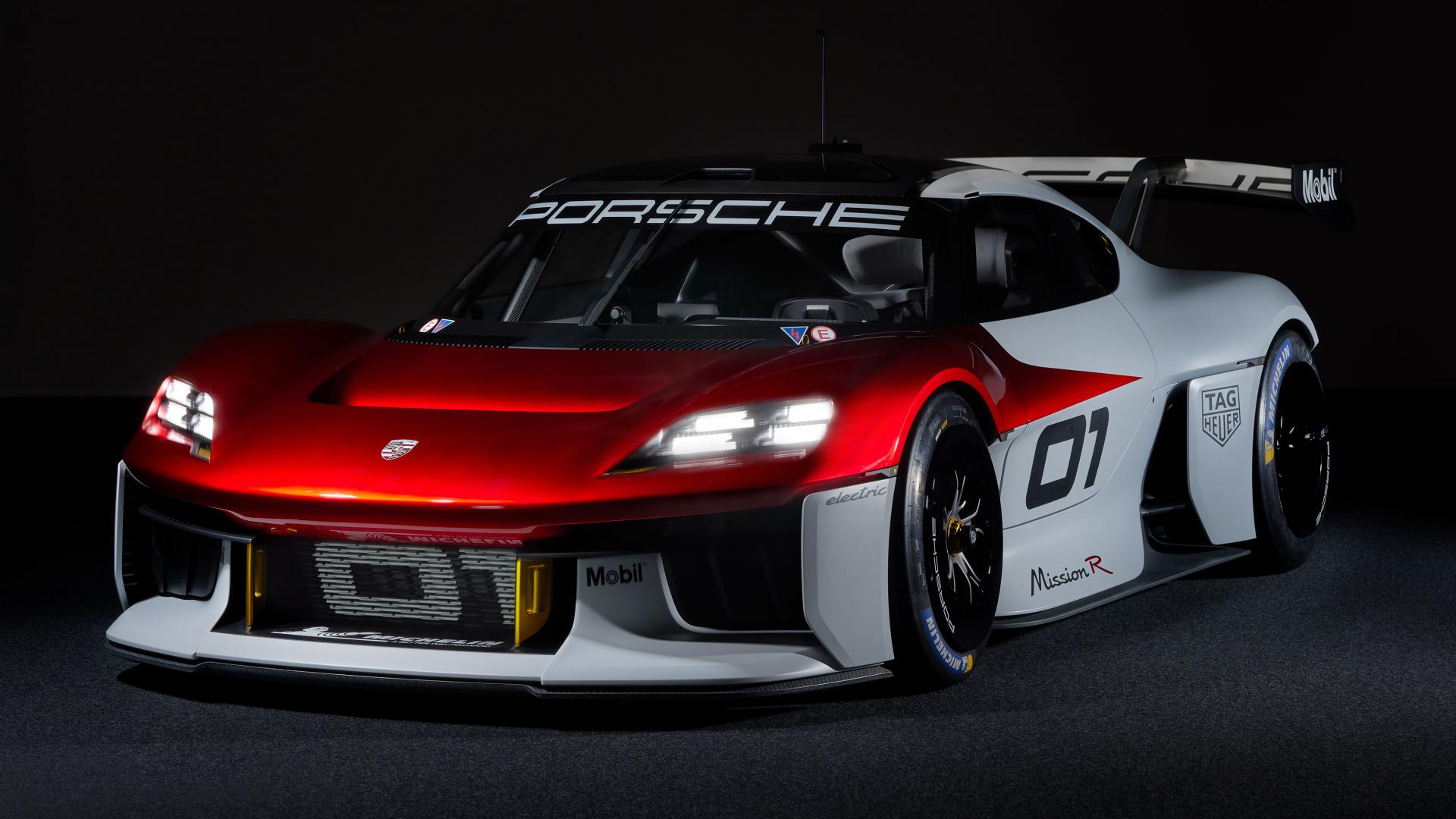 It gets even more intriguing when it comes to the design. Usually Porsche's customer race cars start out as production bodyshells.

Not here. The Mission R is the product of the design department and the GT race department working together. There's no production-car analogue.

Well, not yet. We know Porsche is close to deciding on whether to make the next Boxster/Cayman an electric car. The Mission R is Cayman sized. Surely there could be a connection.

Is this the new Cayman in disguise? At this point in the interview the designers go strangely quiet.

Except, says Ingo Bauer-Scheinhütte, who's head of advanced exterior design at Porsche, "you will see elements of this in future production cars".

The Mission R is a nuggety little thing. Bauer-Scheinhütte calls it "an end to the arms race where everything is bigger and heavier".

He points to the low bonnet, fast roofline and muscly haunches, and then concedes that "all Porsches have those, you've heard it a million times". So he launches into the loving details.

First, the roll cage is carbonfibre, and instead of being wedged inside the roof pillars, it forms the roof support itself, like an exoskeleton. That saves weight and space, making the car lower overall.

OK, carbon roll cages are illegal at the moment, so he concedes they'll have to negotiate with the FIA, or change it.

Next the cutaway areas behind each wheel, and the louvres. All very purposeful. A drag reduction system is aimed, as it's an EV, more at cutting resistance than increasing top speed.

The front lights are Porsche's usual quartet formation, but instead of a glass cover they have vents to cool the LEDs. The rear light strip embodies 3D Porsche lettering, and forms the rear spoiler. 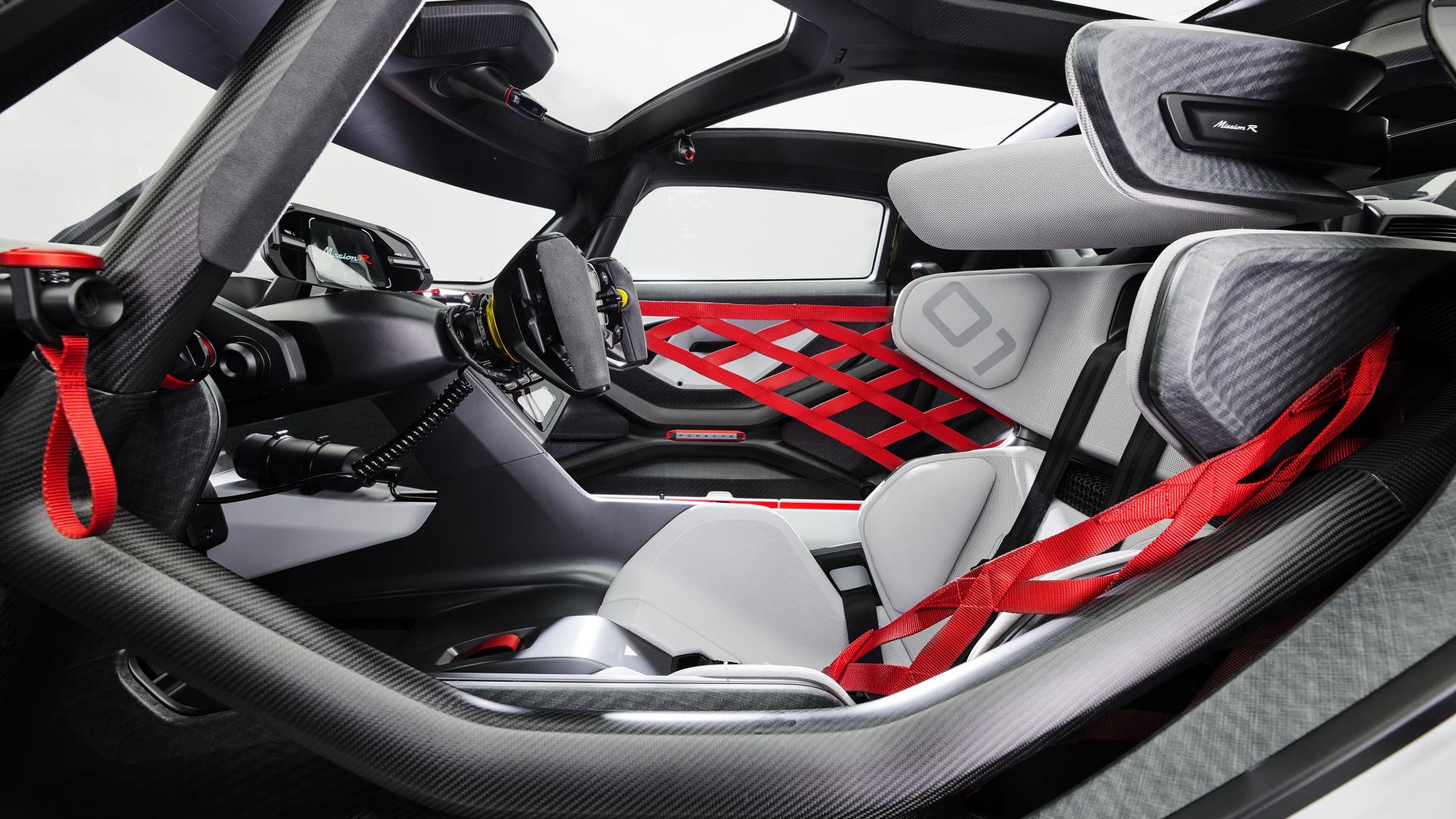 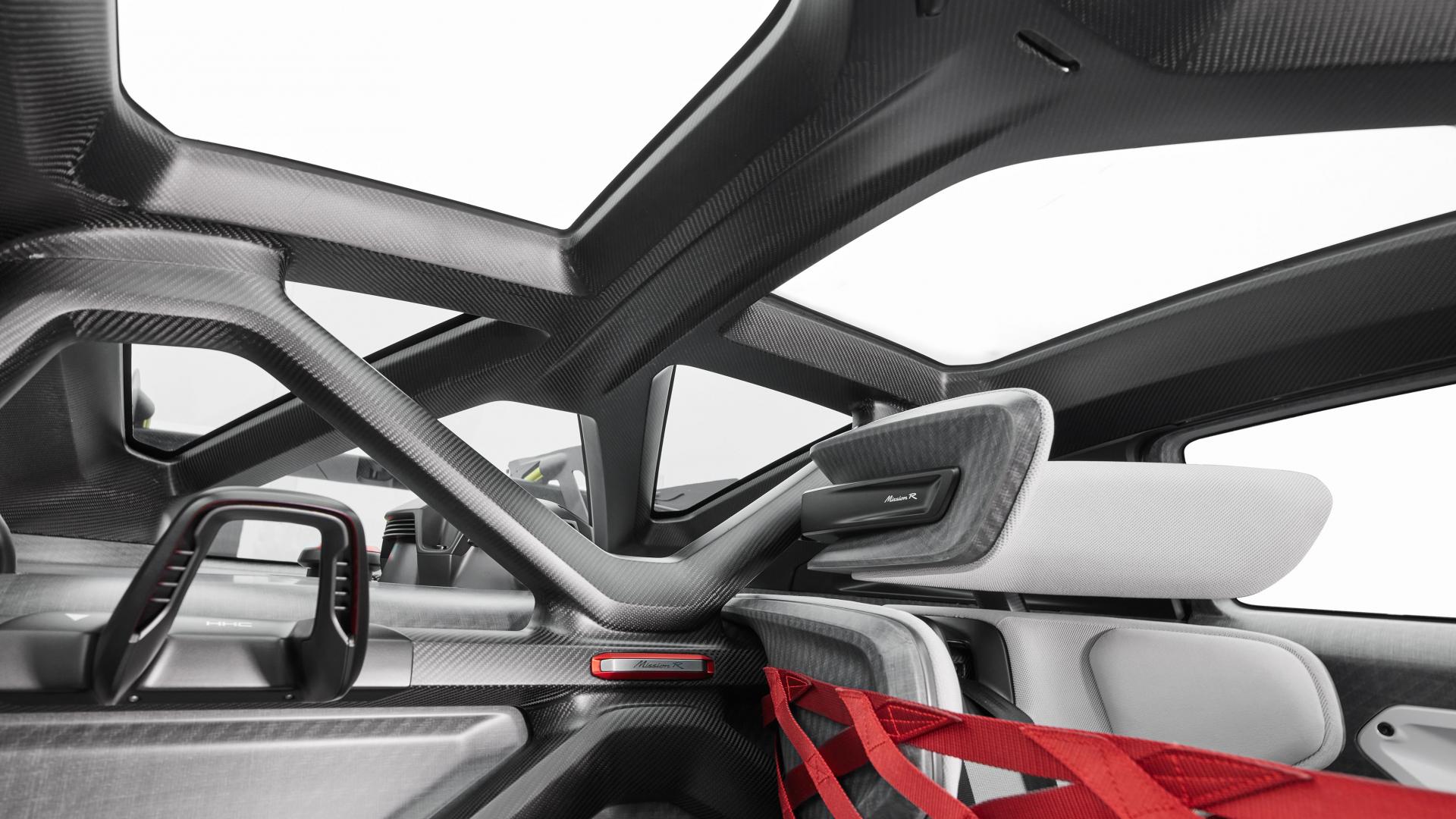 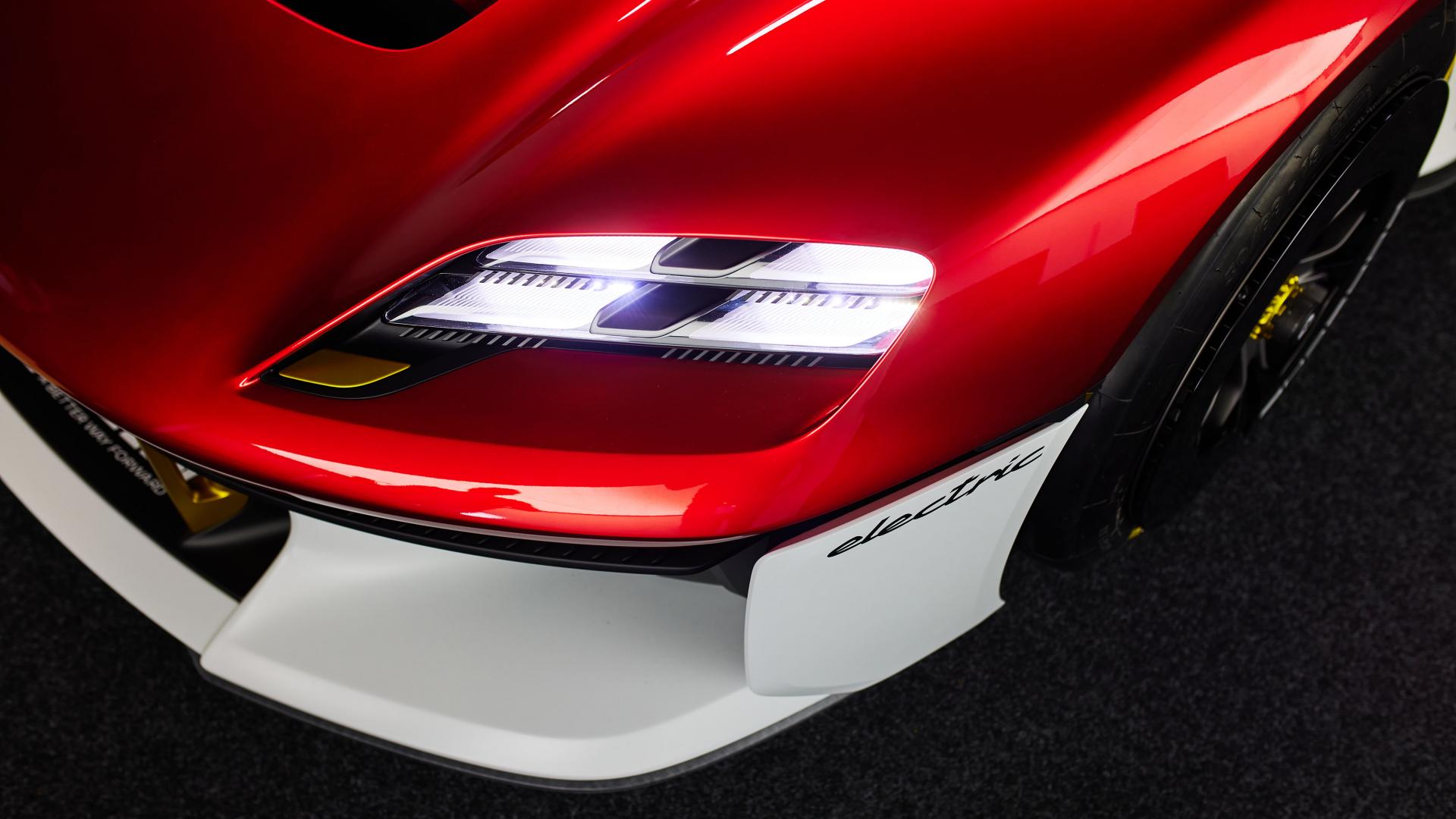 Inside, the seat pads are 3D-printed to match each driver's backside. The displays and main switches populate the steering wheel.

Still pretty handy with an overall weight of 1,500kg. It's all-wheel-drive: they say it could be as fast with just a rear motor.

The main job of the front one is to allow four-wheel regenerative braking, so it can race for longer before going flat.

The motors are essentially Taycan Turbo S jobs, but uprated thanks to running at 900V instead of 800V, and oil cooled to save them from meltdown at that higher stress.

The battery, weighing 150kg, sits behind rather than below the driver. Hence the visual proportions of a mid-engined car. They're confident of the performance numbers, having had factory hotshoes Lars Kern and Timo Bernhard testing a mule.

And actually, by 2025 they expect a new generation of batteries that'll be able to improve range, or alternatively cut weight for the same range.

Officially, Porsche's line is that an electric platform for customer racing is another logical step into a sustainable future of motorsport.

Or, in the designer's words: "We will find a way to realise a car such as this." The Porsche 911 may be 'the last car to be electrified'