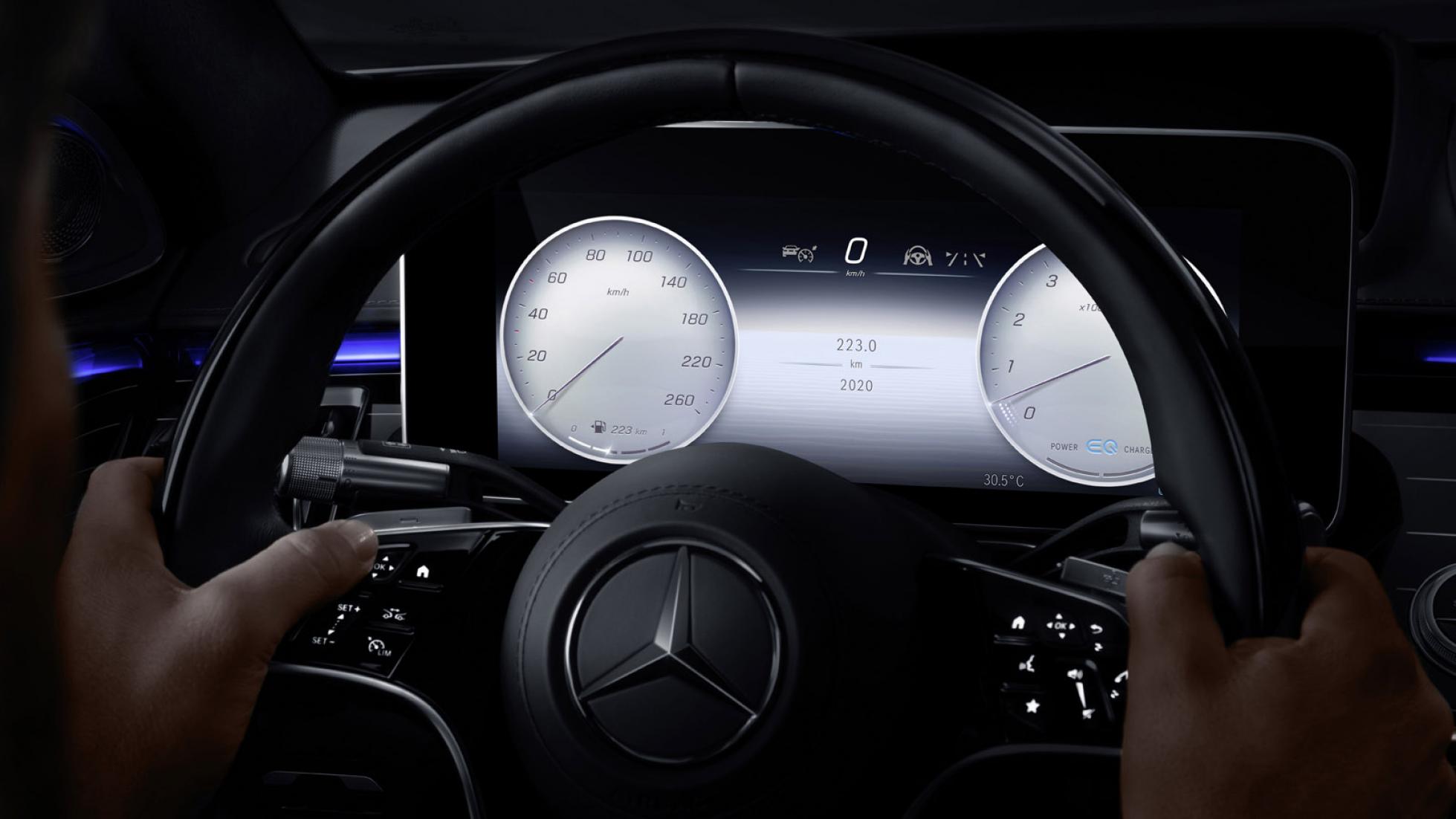 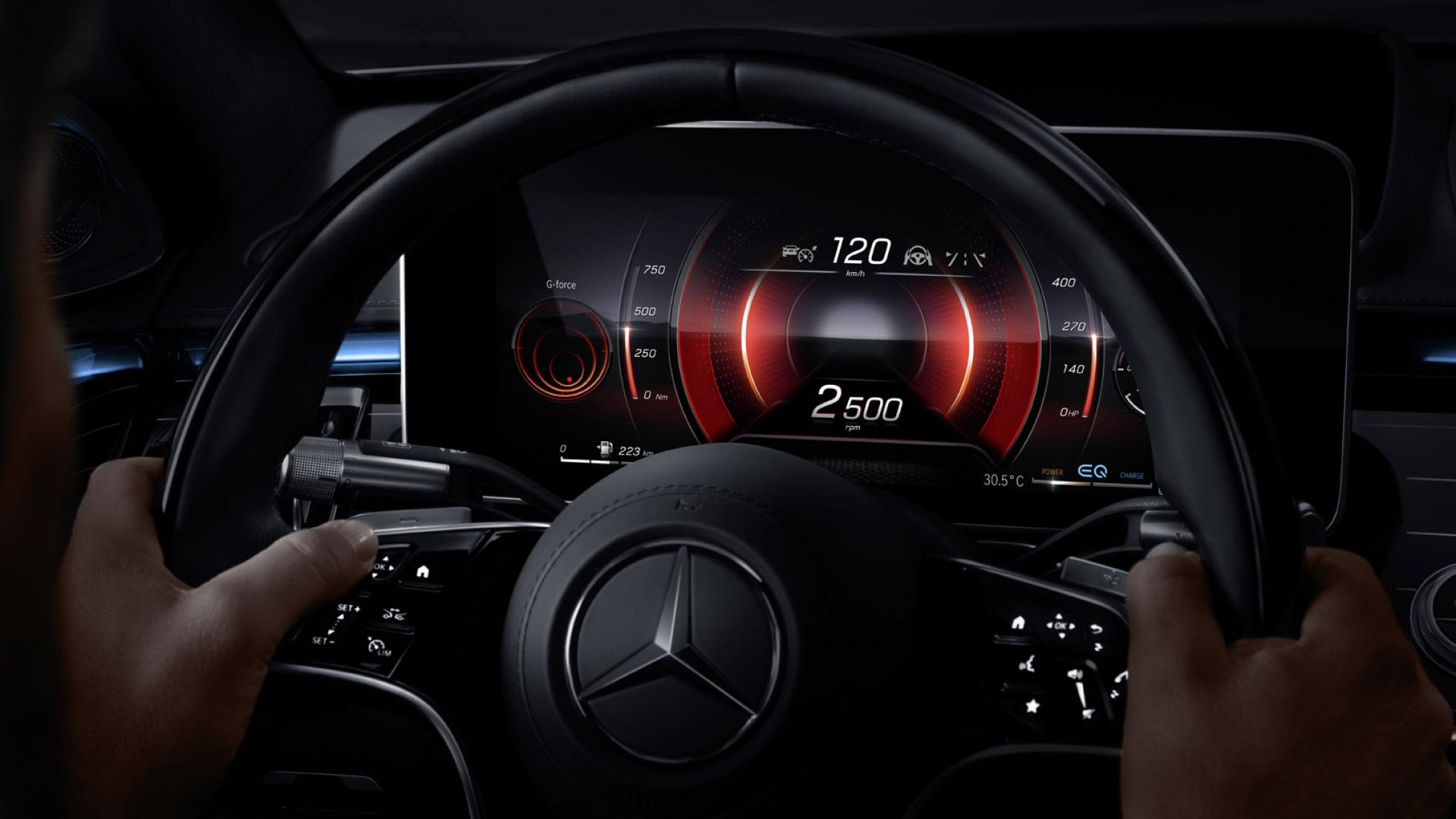 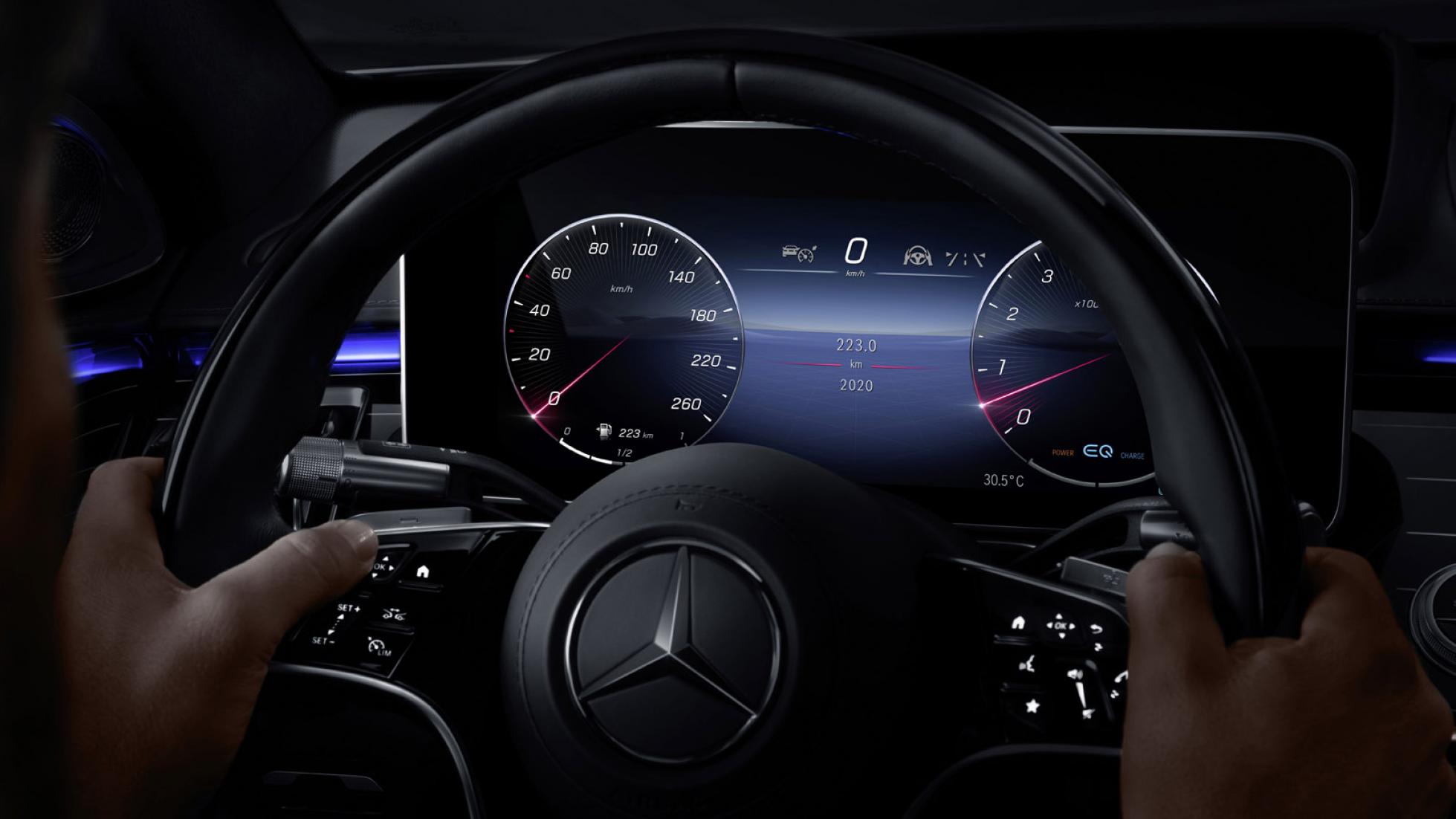 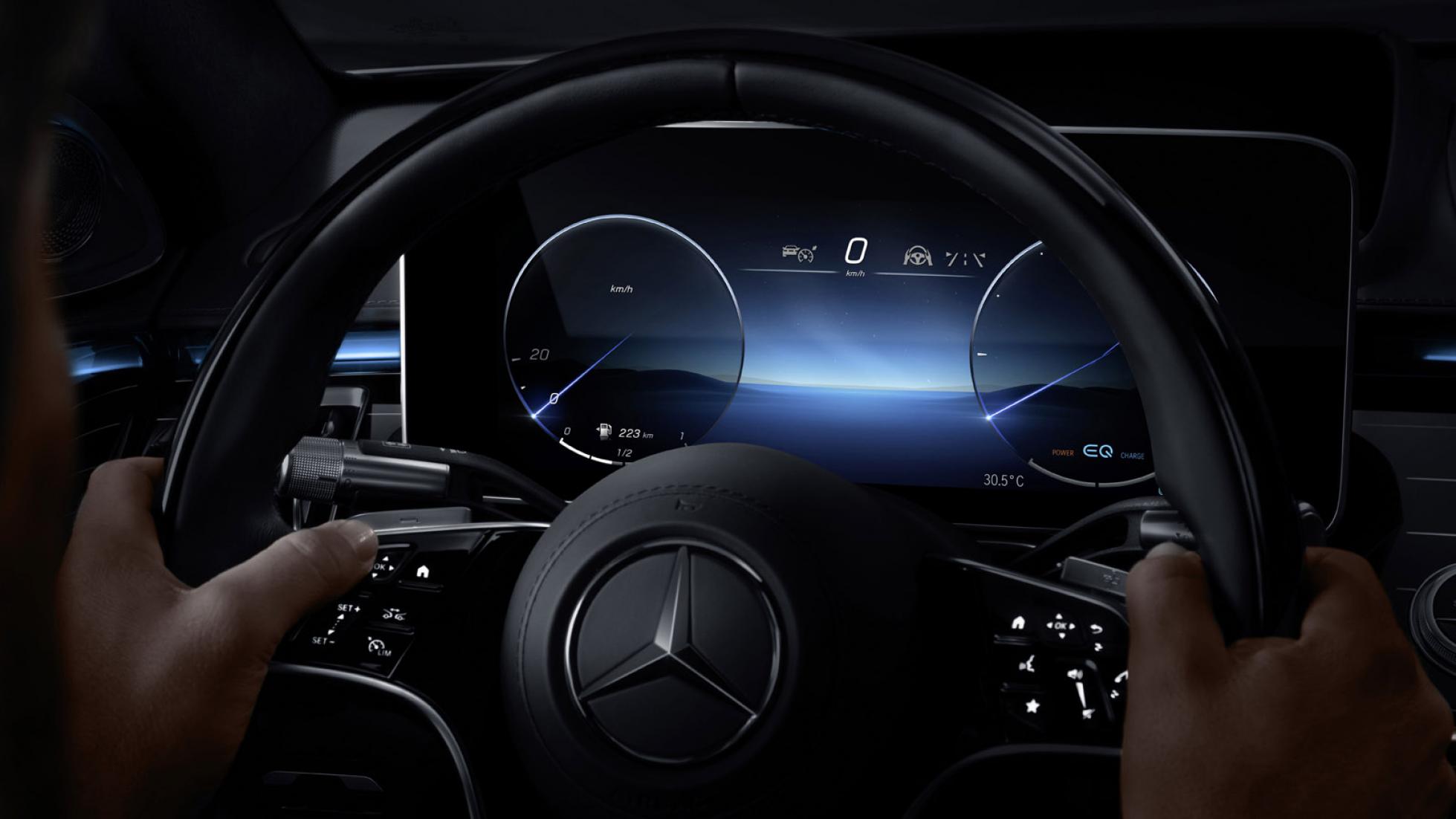 To tide us over until we see the actual car in a few months, Mercedes has given us a sneak peek of its new flagship’s interior tech. And unsurprisingly there’s not a button in sight.

Yep – the new S-Class is going to be a veritable tech fest, with a gigantic 12.8-inch touchscreen infotainment system at its core. And no physical climate controls, because it’s 2020 and apparently those aren’t allowed anymore. Climate controls are always displayed though, in a band running across the bottom of the screen. And Merc has elected to keep separate control panels, buttons and stalks for headlights, wipers and so-on. Don’t worry, it hasn’t gone full Tesla just yet.

We’re told the new MBUX system has 50 per cent more processing power than the old one. Its GPU has 691 ‘gigaflops’ – whatever those are – and there’s a built-in 320GB solid-state hard drive. You can touch, swipe and pinch your way through menus, much as you can on your phone. You can talk to it, too – Merc claims its “Hey Mercedes” voice assistant, which can understand 27 different languages, is now cleverer and more ‘natural’ than ever and can do pretty much anything you ask of it.

For some functions, though, you can just glance or gesture in a given direction. We’ve seen gesture control before and to be honest it’s a bit rubbish, but Merc’s new “MBUX Interior Assistant” promises more. Using cameras pointed at the car’s occupants, the system can effectively guess what it is you want to do, then do it for you. Look over your shoulder and it’ll automatically open the rear sunblind, for example. And if it sees you scrabbling around on the passenger’s seat at night looking for something, it’ll turn a light on for you. 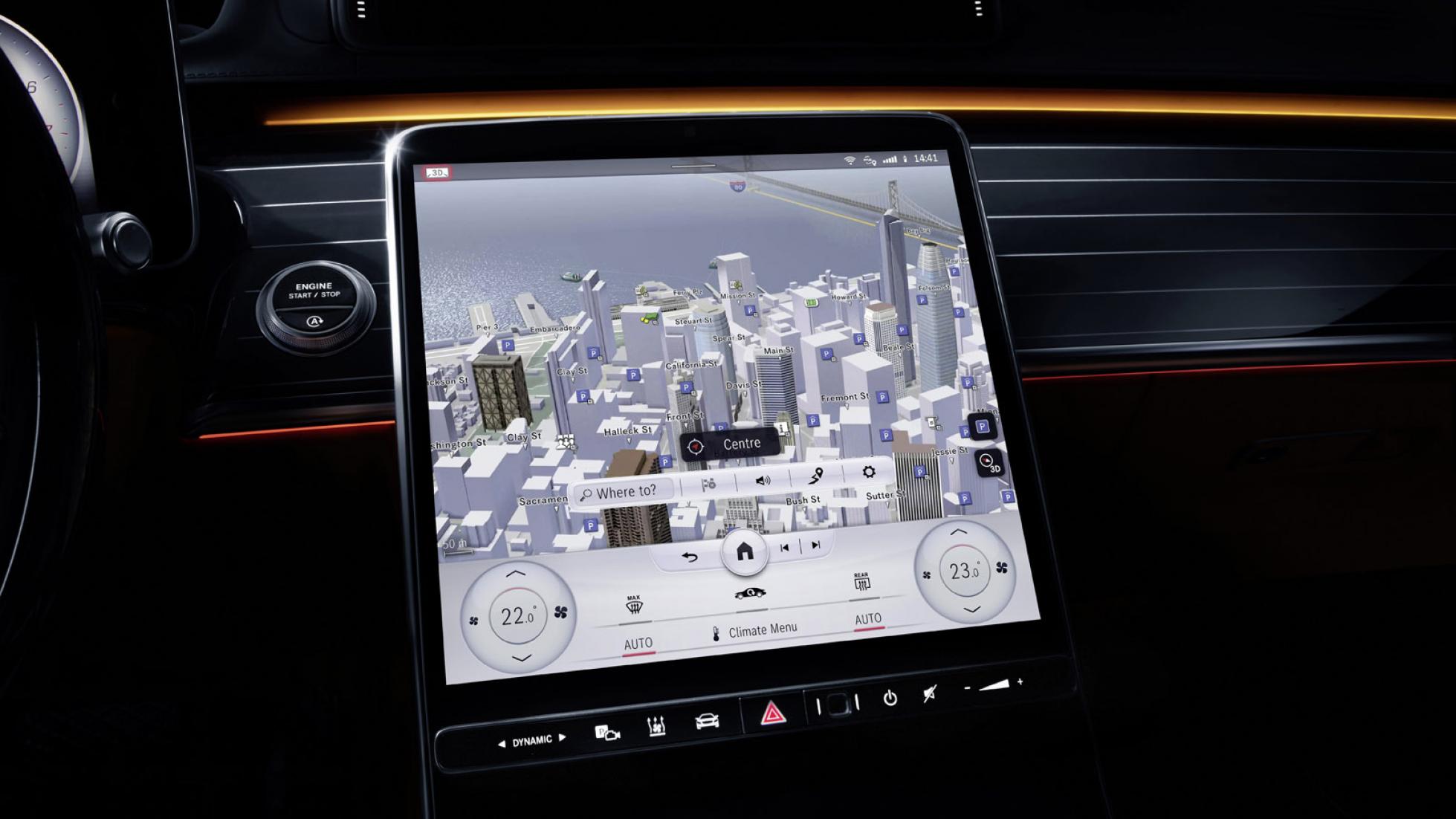 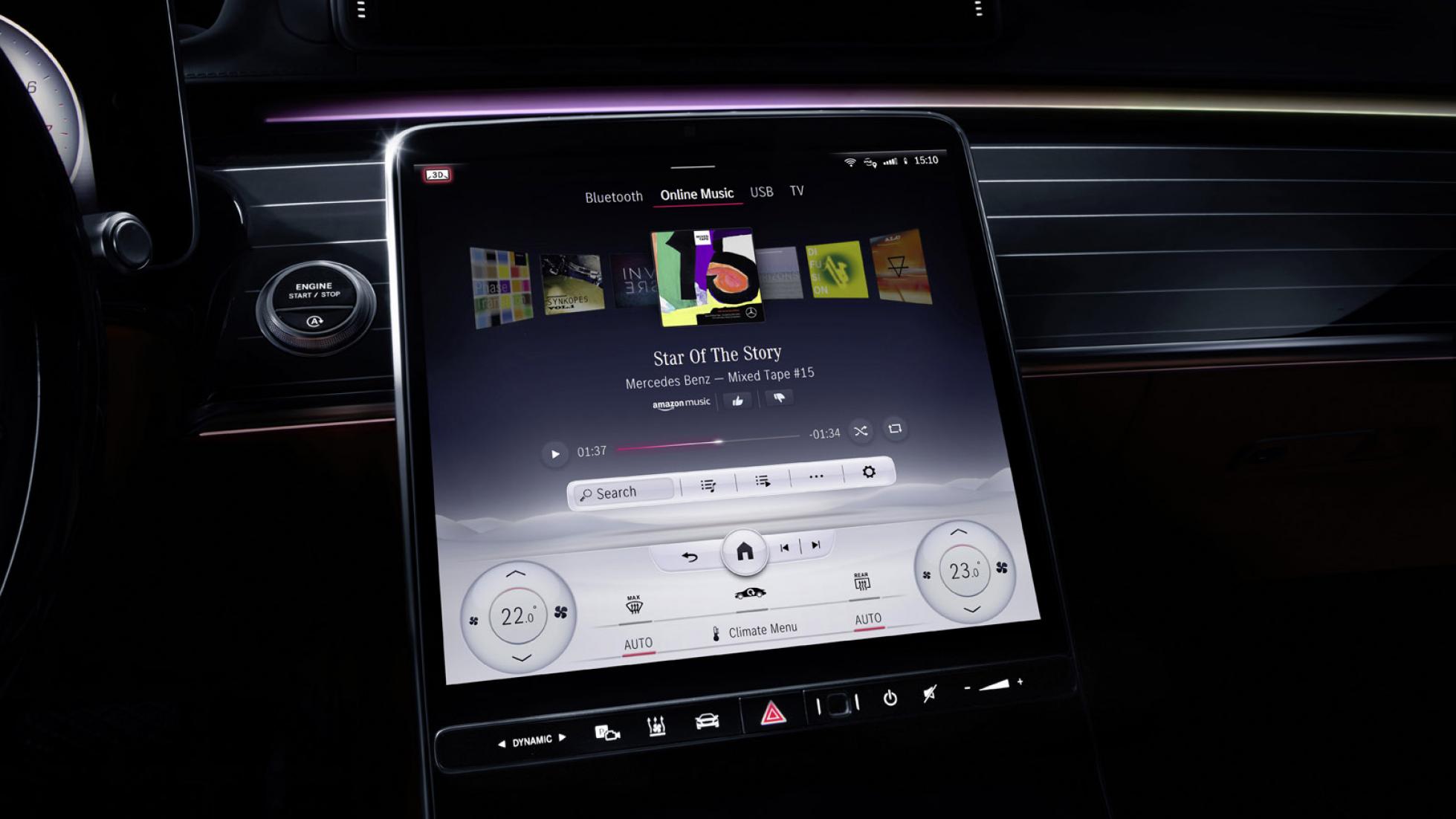 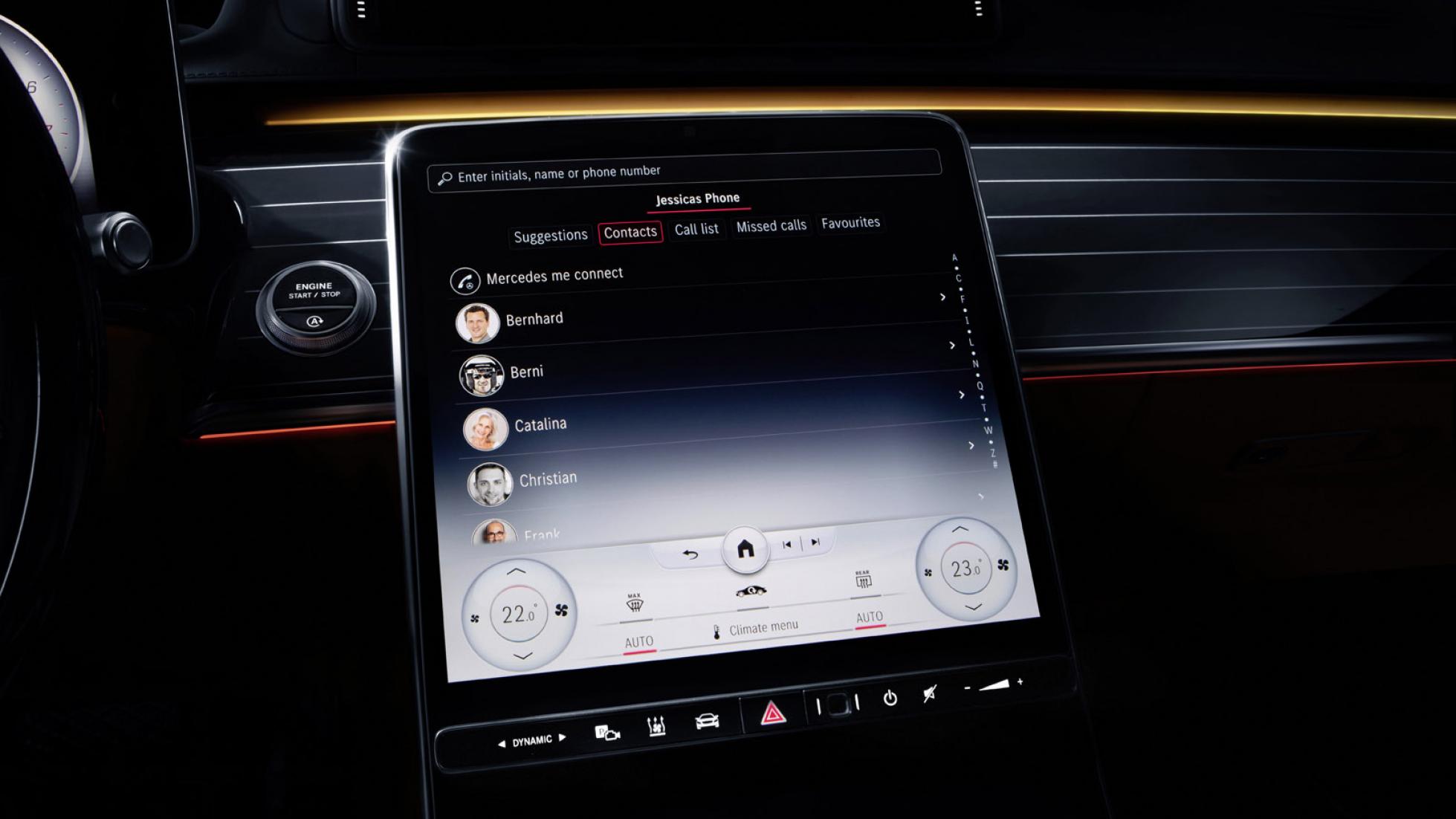 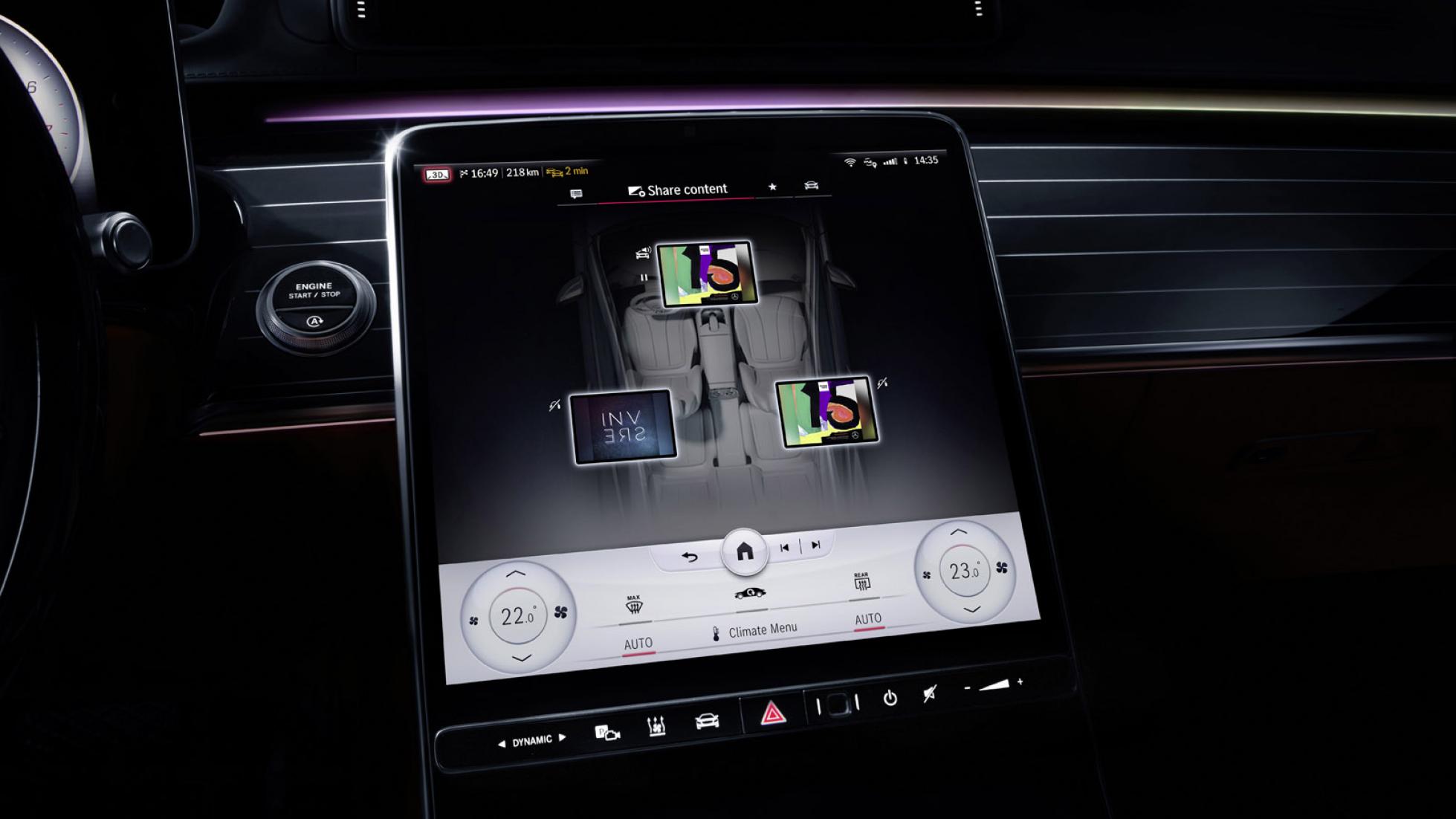 The system has other benefits – it knows when you want to get out of the car just by interpreting your body language, then can warn you about passing cars, cyclists or pedestrians. Clever if it works, but probably quite annoying if it doesn’t.

The augmented-reality head-up display (AR-HUD) sounds cool. The S-Class can project directions (and so on) onto an area equivalent in size to a 77-inch telly, at a virtual distance of around ten metres. It can project arrows and instructions onto the road surface, leaving you in no doubt as to what lane you need to be in. Moreover the instrument cluster uses yet another camera to track your eyes and create a clever 3D effect.

But the S-Class is a limo, really, so Mercedes says it has “systematically designed the new edition of its flagship model with the rear in mind”. Rear seat passengers get up to three screens, all with full access to the main infotainment system. In all, the S-Class gets up to five screens, some of which make use of OLED tech and haptic feedback. Content can be shared between screens, and all passengers can even set up their own profile, which is stored in the cloud and can be downloaded to other compatible Mercs. Or other seats in the same Merc.

Your S-Class will know quite a bit about you, then. But fear not, because Merc has deployed not only a PIN code, but also face, voice and thumbprint recognition for “access to individual settings or verification of digital payment processes from the vehicle”.

Blimey. More as we have it. 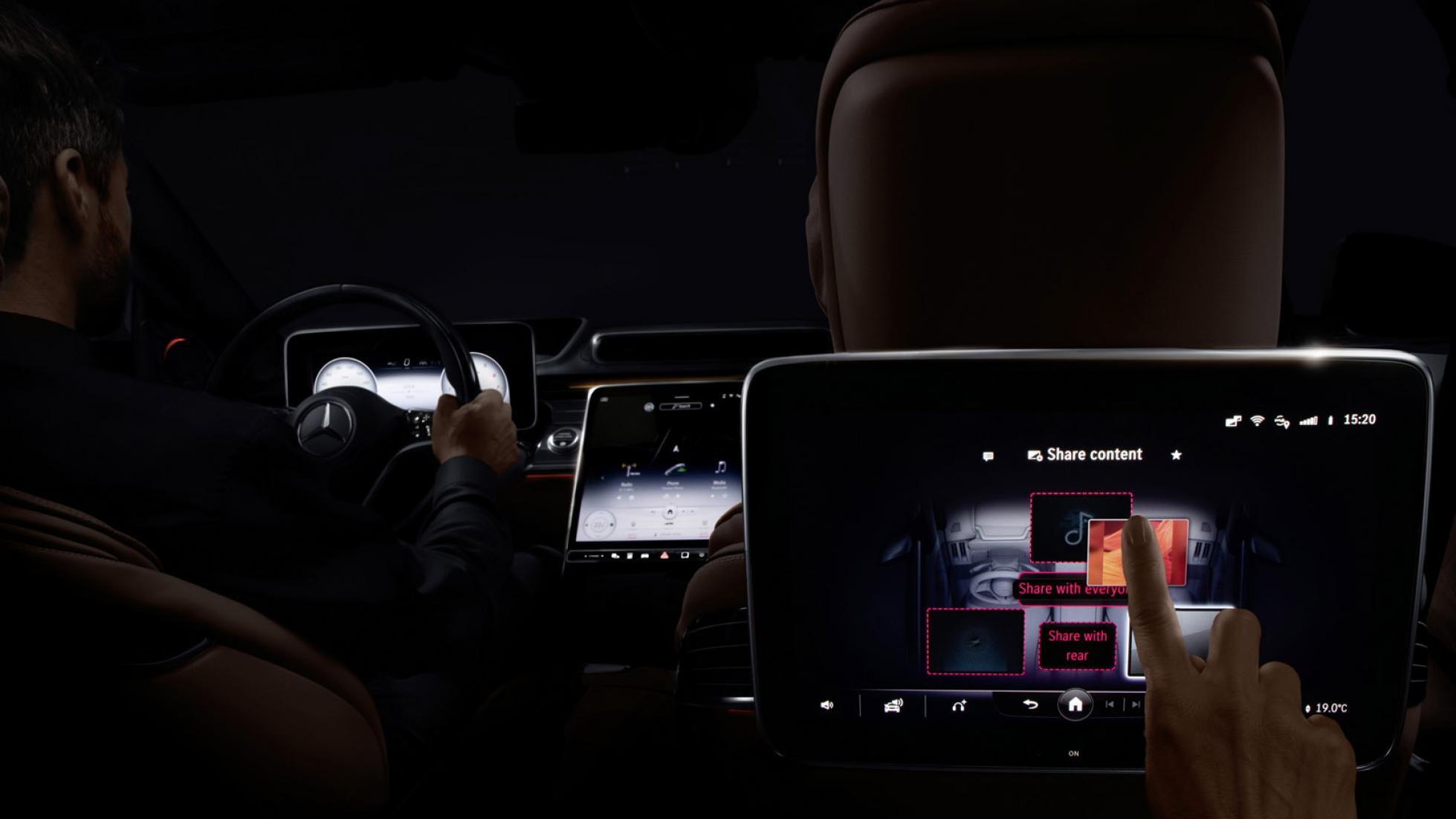 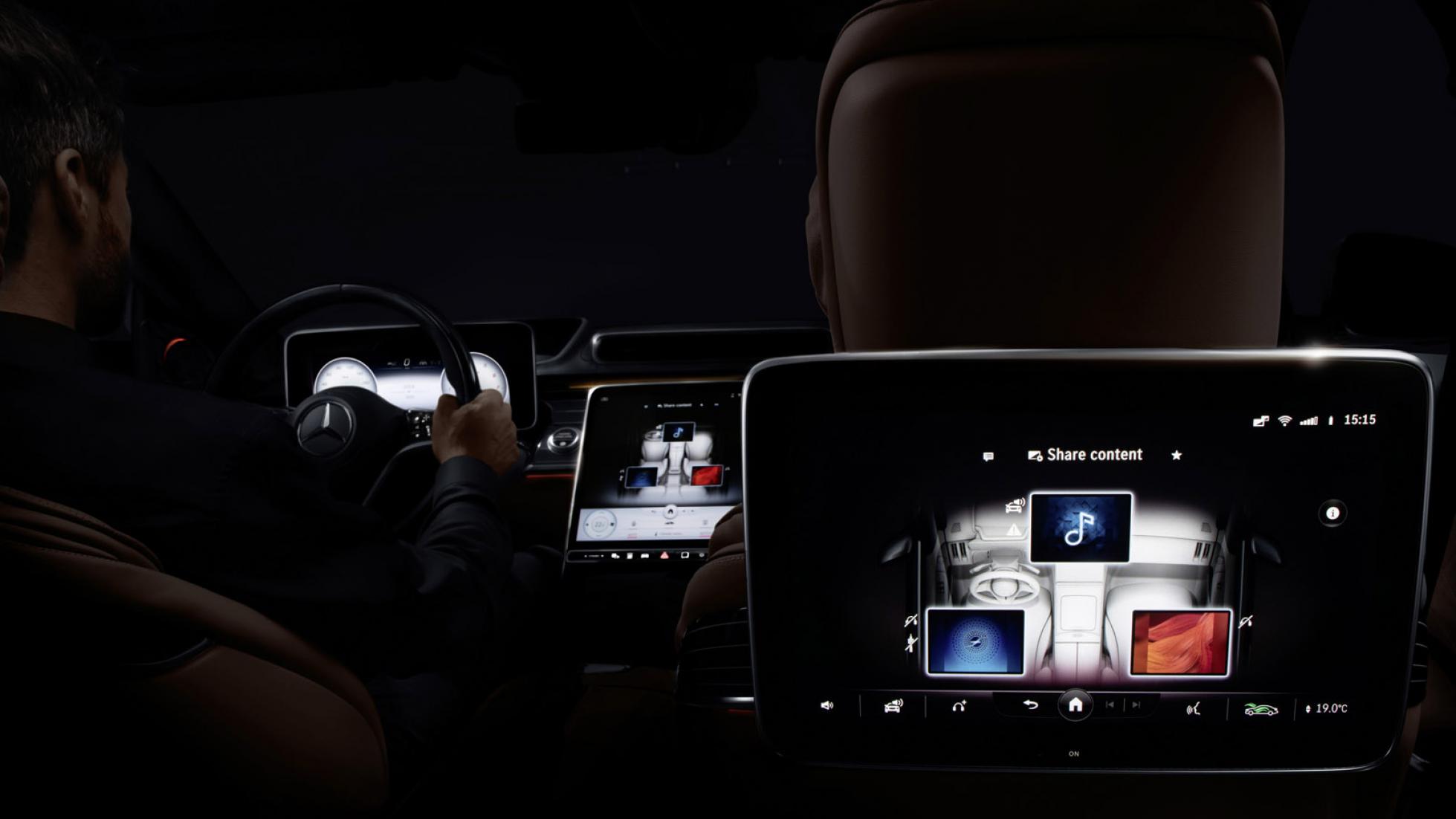 Renntech will boost your AMG A45 S to almost 600hp

A hot hatch with 600hp. Stop the world, we want to get off