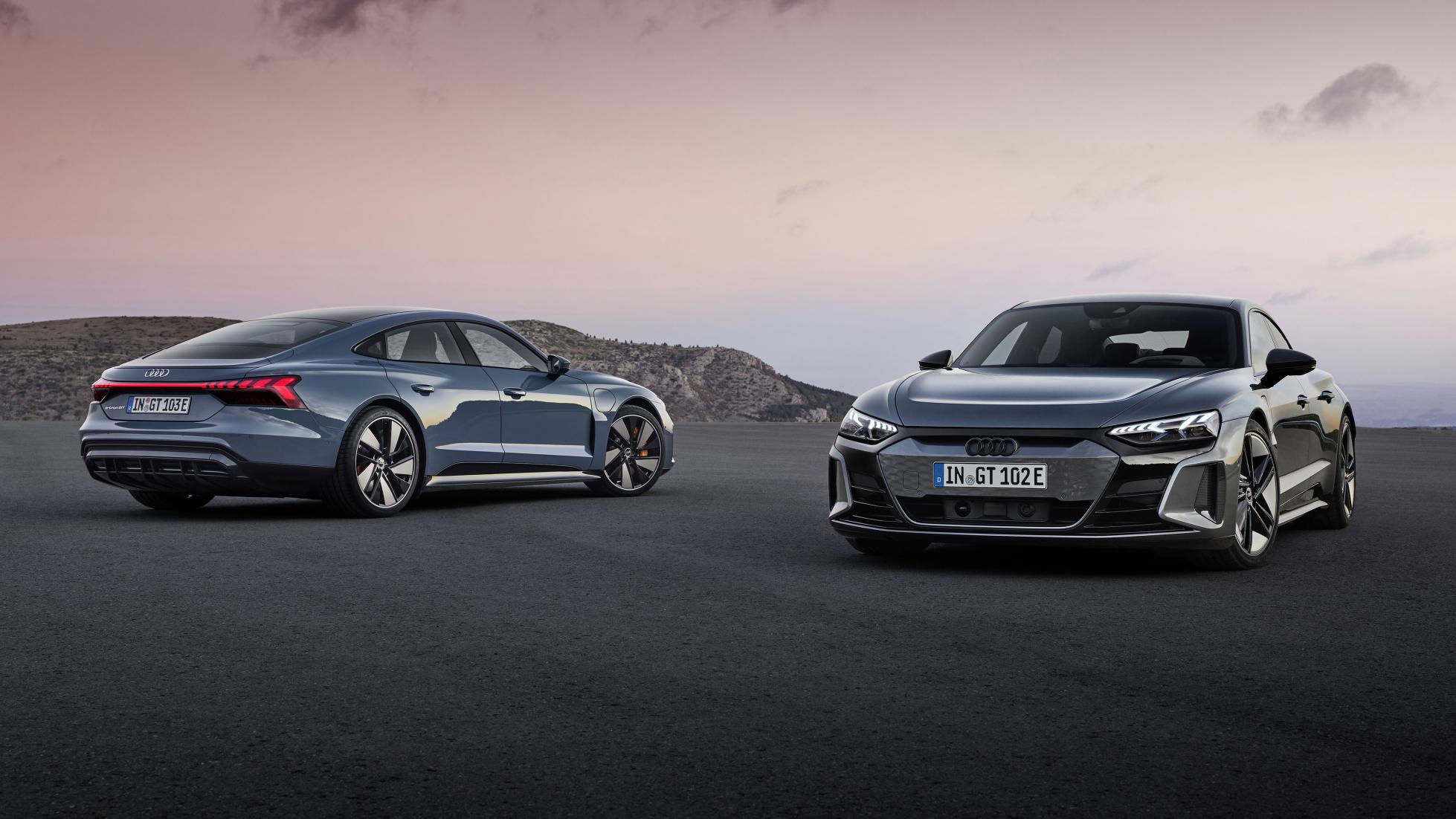 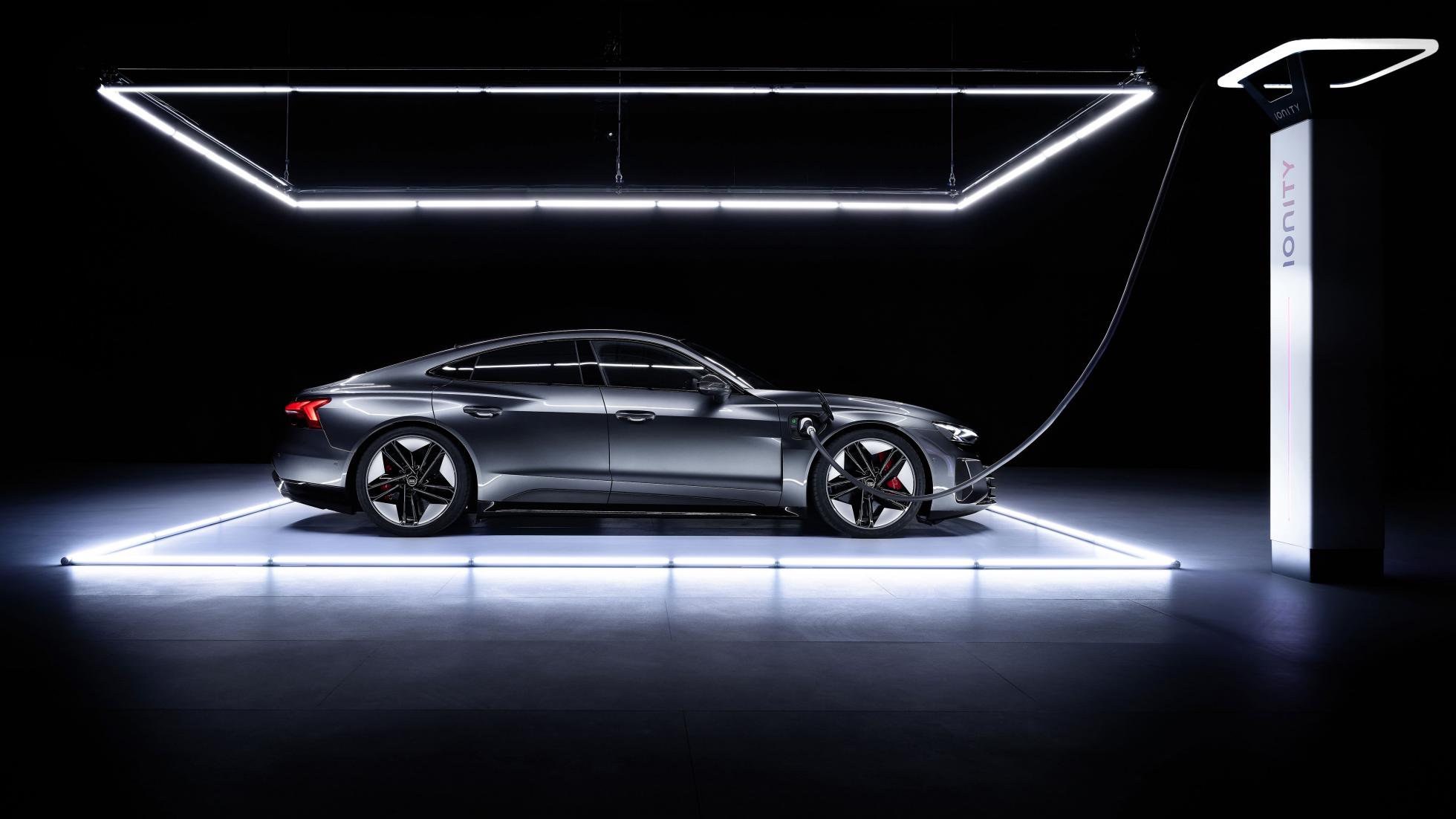 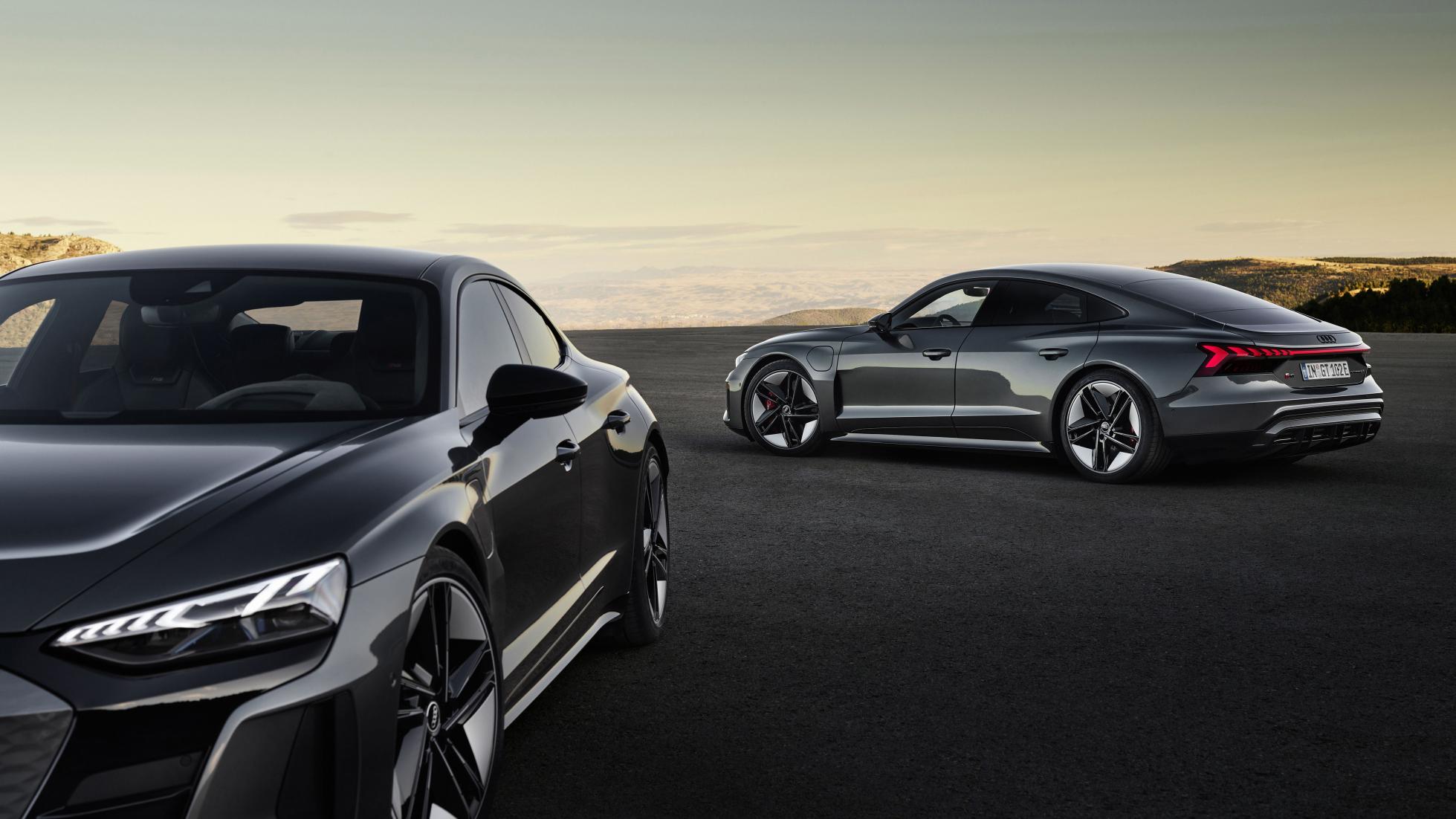 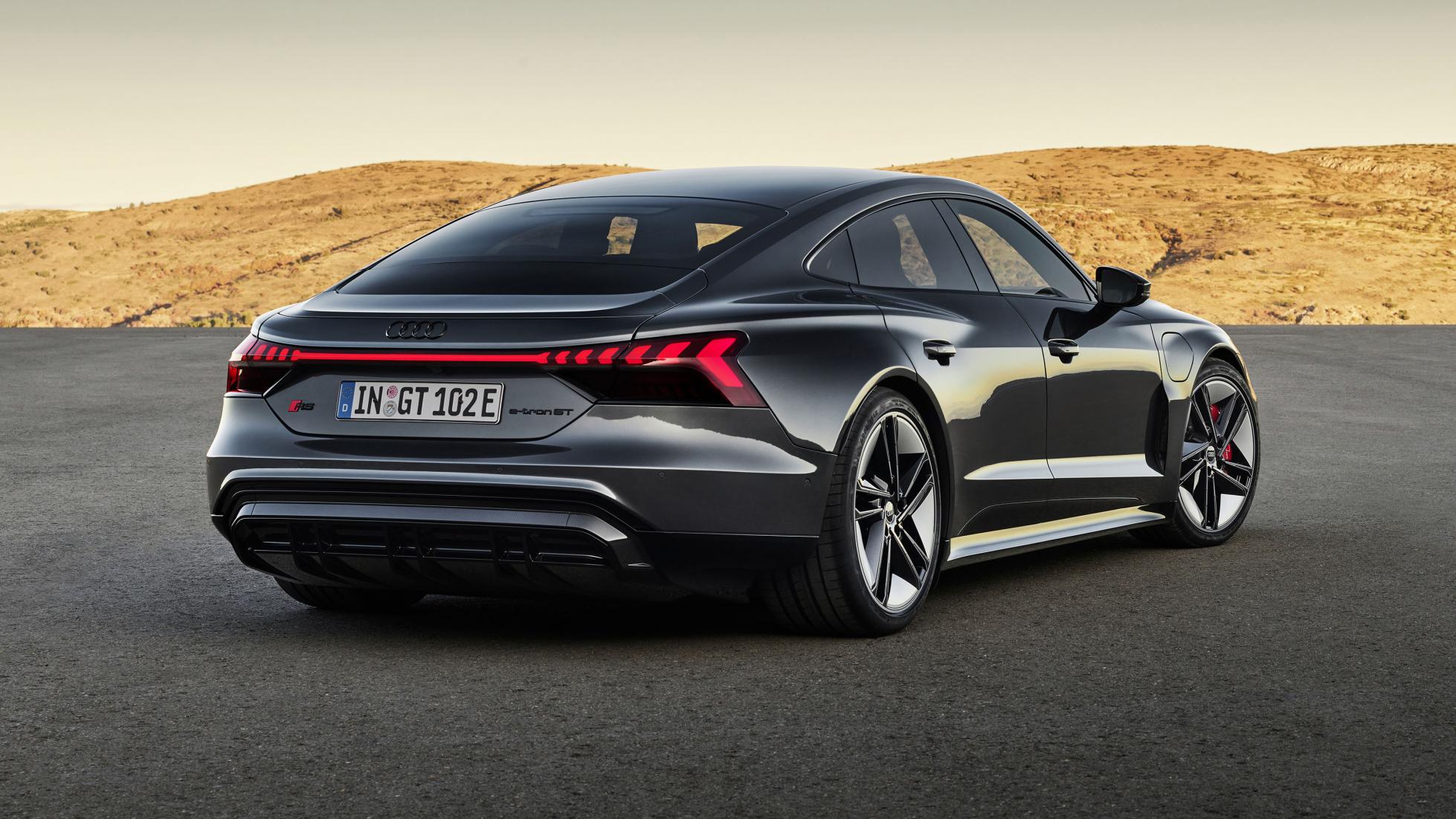 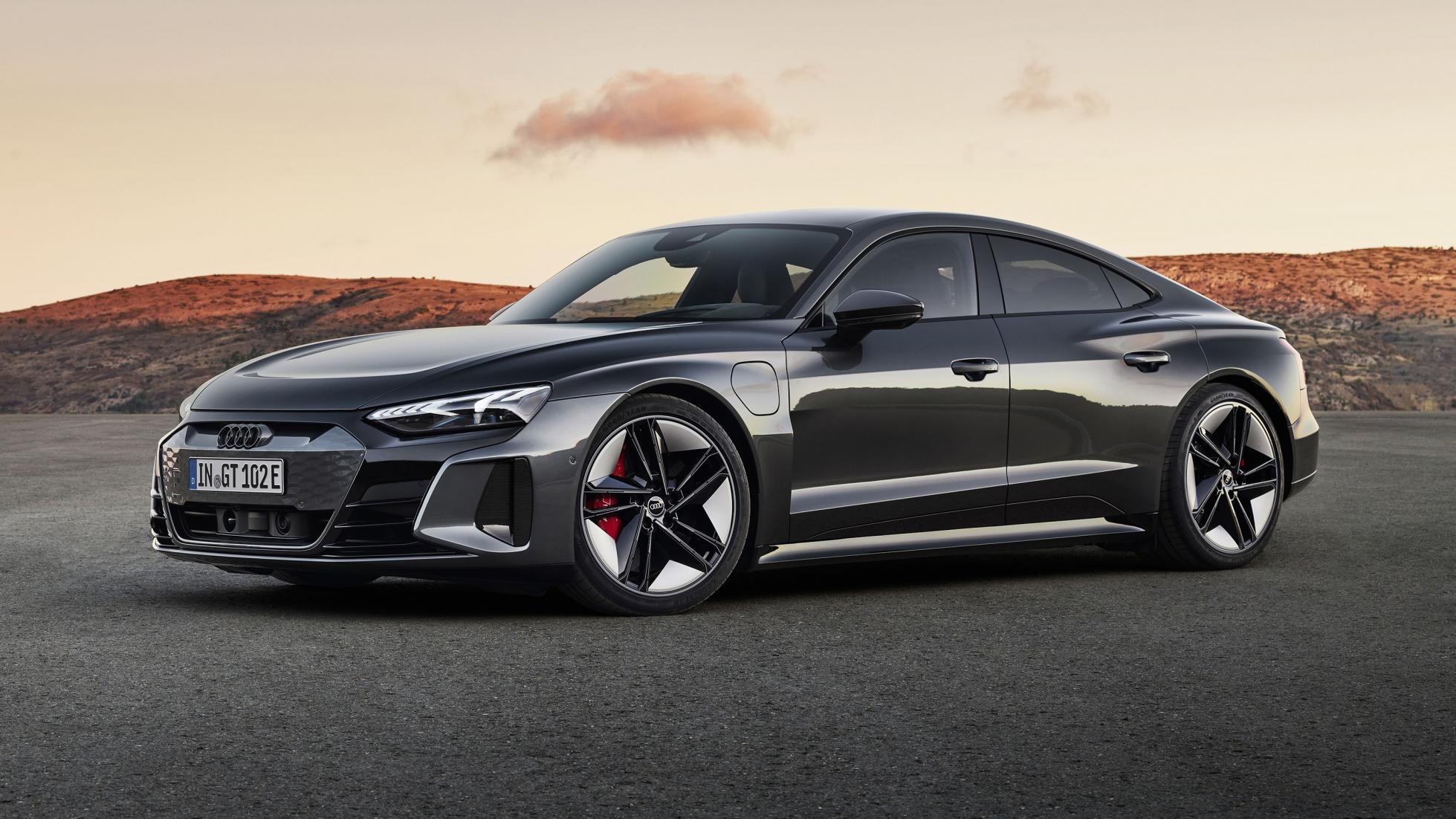 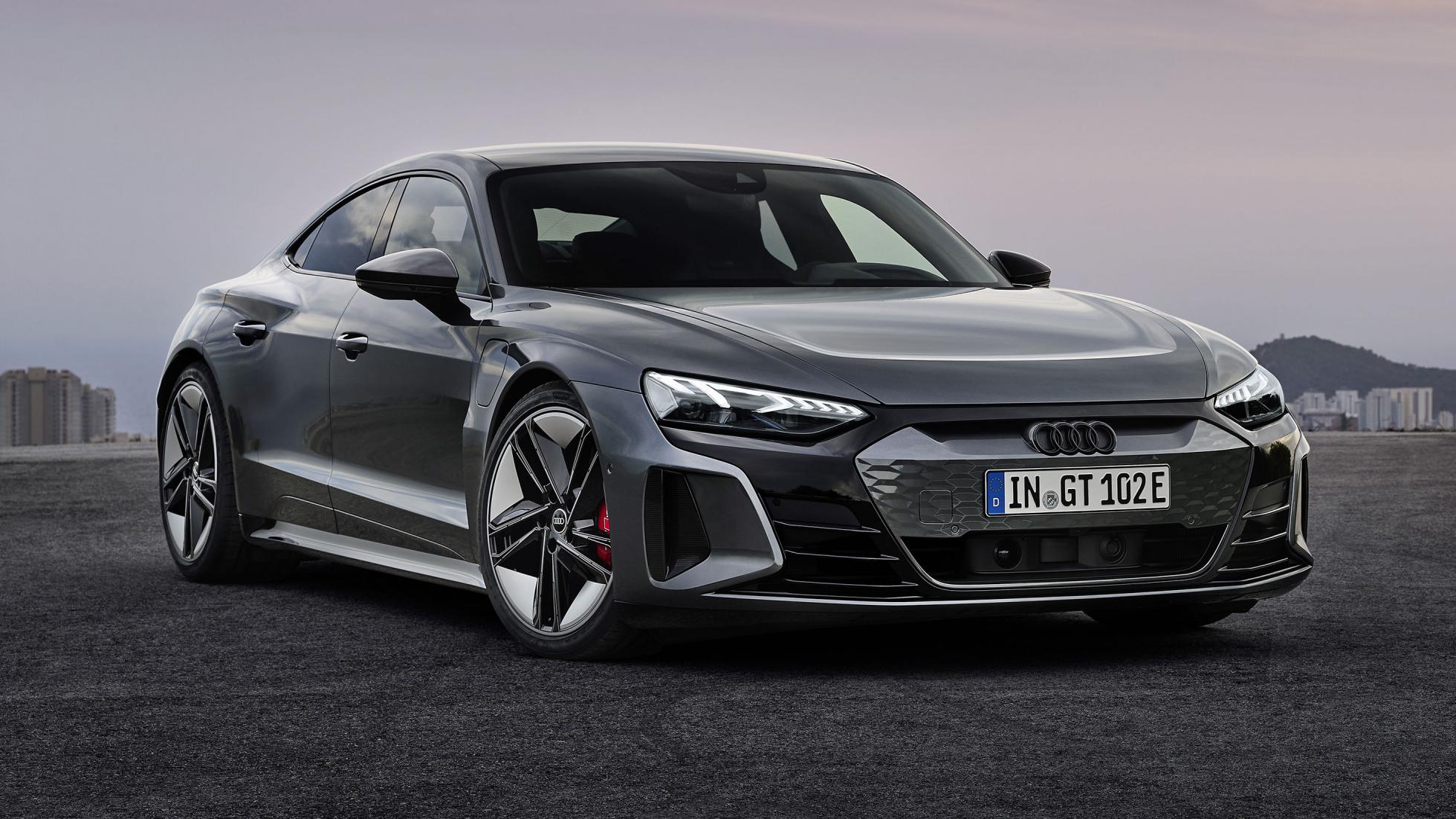 A Porsche Taycan too sporty for you? An RS7 to petrol-y? Well, the new Audi e-tron GT is right up your street. It’s not the first pure-electric Audi of course, that title goes to its ever-growing line-up of e-tron SUVs, but the first based on the J1 platform shared with the Taycan.

Let’s get the salient numbers out the way first. There will be two flavours of e-tron GT initially – e-tron GT quattro and RS e-tron GT. That’s right, this is also the first electric Audi to wear the RS badge. No pressure.

Both have a motor at either end for four-wheel drive, both have the same two-speed gearbox as the Taycan on the rear axle to elevate efficiency at higher speeds and both feature a 93kWh battery as standard – no shorter range 79kWh option like the Taycan here.

Too slow? The RS gets 600hp or 645hp on overboost making it the most powerful RS model to date, albeit in brief bursts, capable of 0-100km/h in 3.3 seconds (half a second slower than the Taycan Turbo S) and a top speed of 250km/h. Rib-crushingly quick, then, just not quite as sadistic as the Stuttgart flyer.

Resist your urges to boot it at every opportunity, and Audi claims a WLTP range of 487km for the quattro and 470km for the RS – the former a couple of klicks more than the RWD-only entry-level Taycan, and the latter a 20km improvement on the equivalently-powered Taycan Turbo. 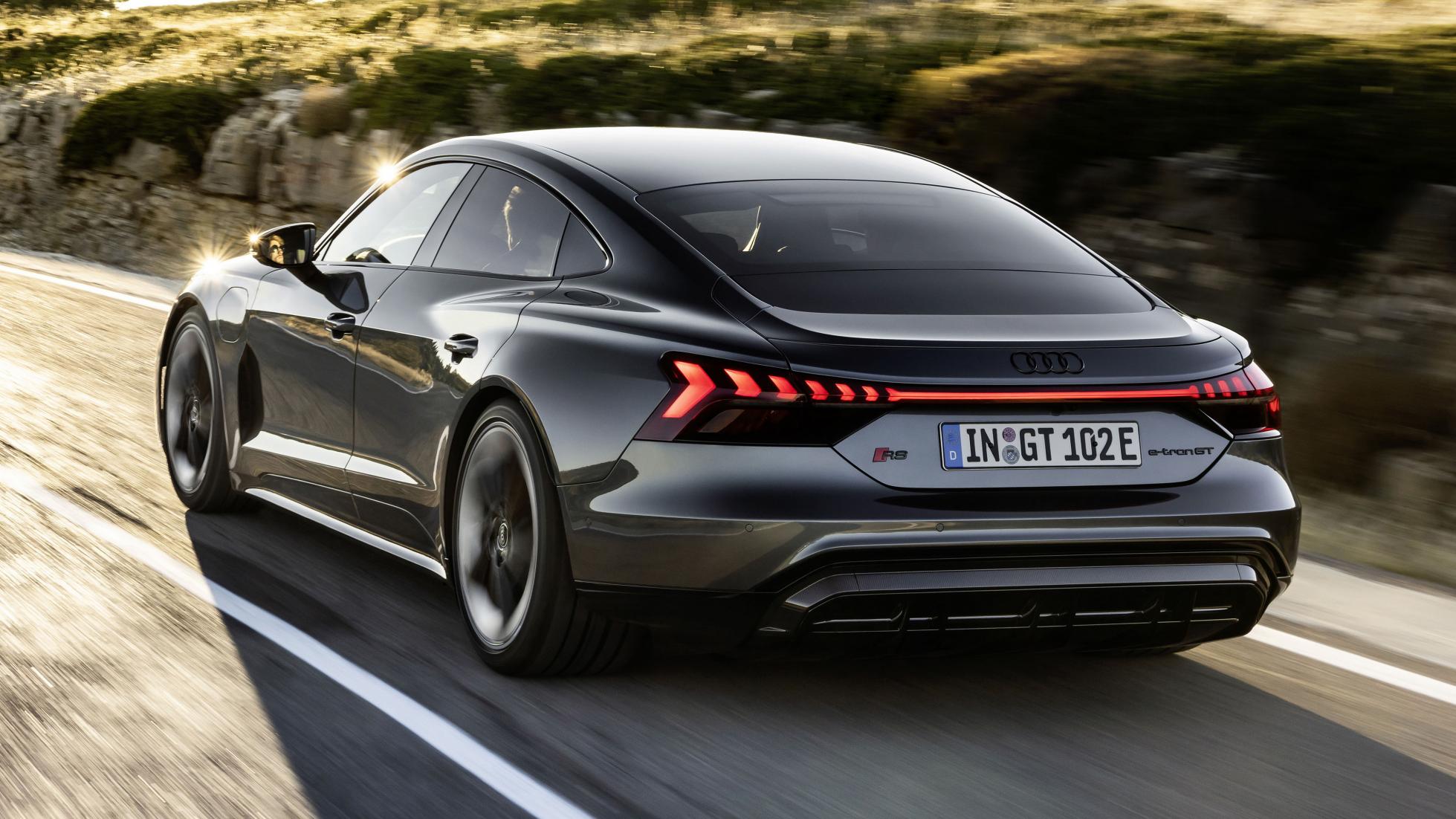 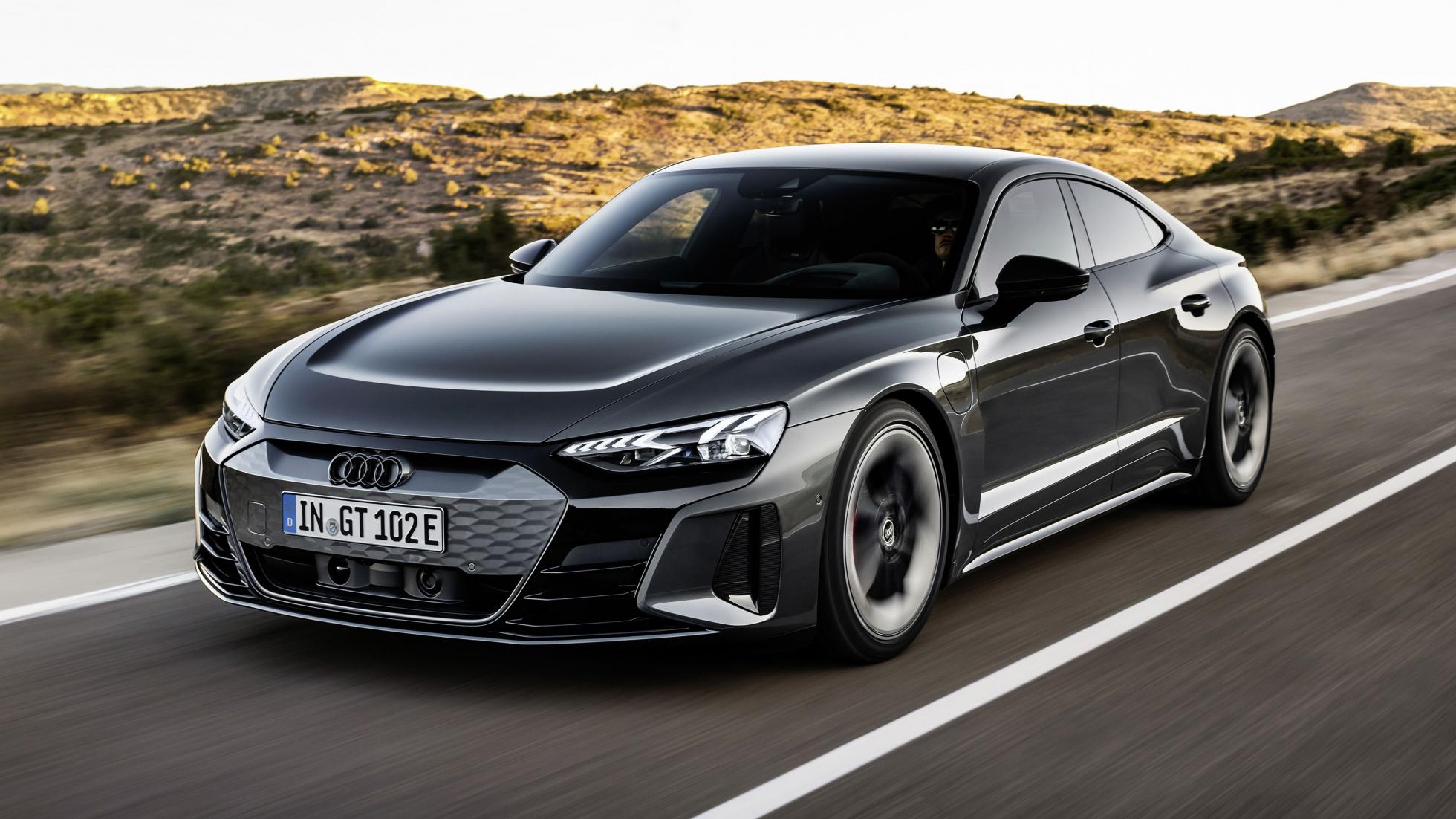 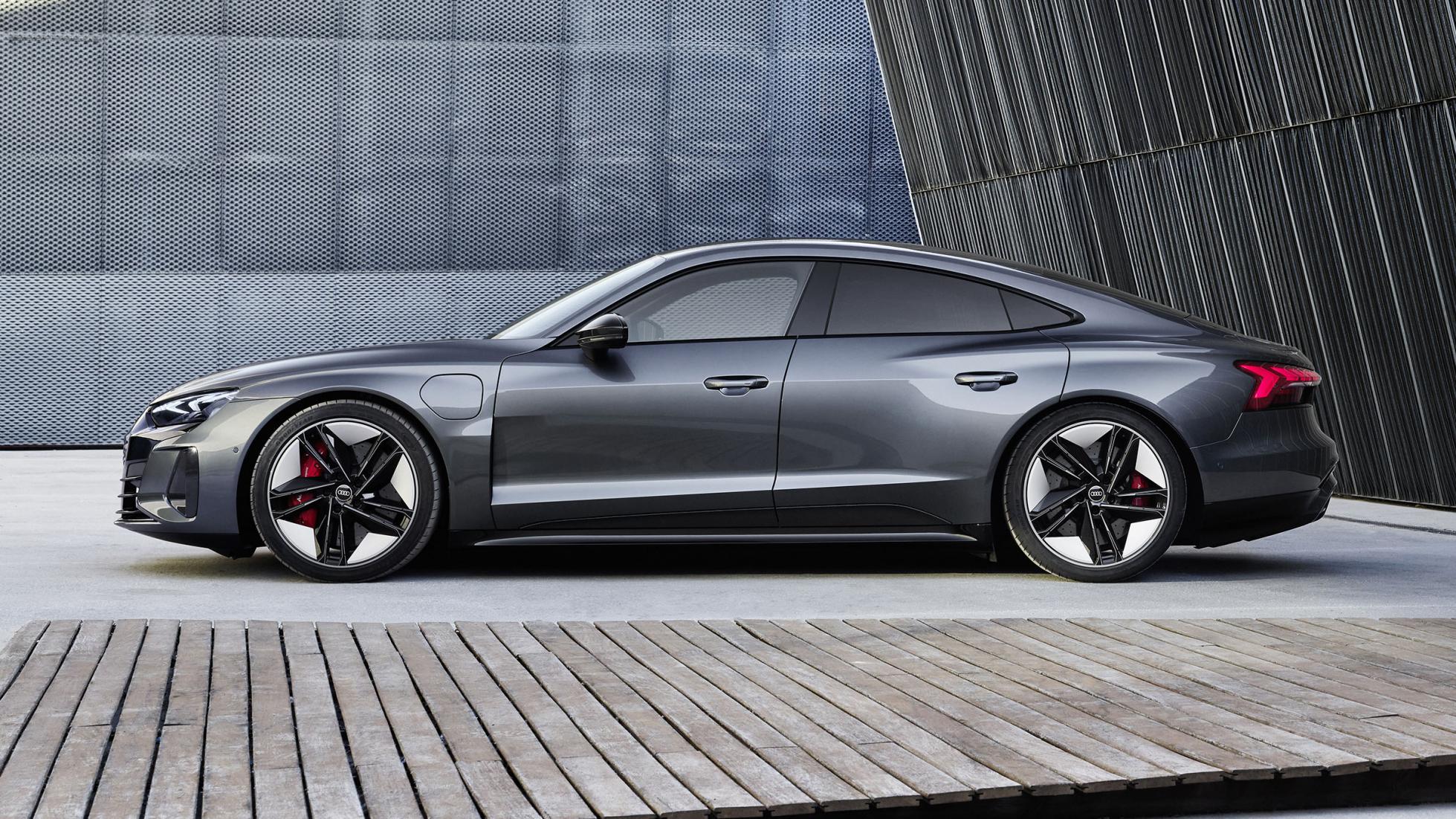 Like the Taycan, an 800V architecture means DC charging at up to 270kW is possible, if you can find a point capable of it. At peak speeds that means 100km of range in just five minutes. Zap.

You’re probably starting to get the idea, the Audi is being pitched as more of a rapid GT than a four-door sportscar like the Taycan. Fast, but not as fast as the Porsche. That theory plays out when you get the measuring tape out, too. The Audi is a fraction longer, a little narrower and a few cm taller than the Taycan, there’s a bit of extra boot space too – 405-litres in the back, another 85 in the nose.

Underneath there’s aluminium double wishbone suspension, an electronically controlled rear diff and adaptive air suspension as standard on the RS, four-wheel steering and an “e-tron sport sound” for maximum sci-fi as options on both models, while the centre of gravity – thanks to all those lithium-ion cells – is lower than the R8.

For braking there’s three options – steel discs, steel with a tungsten carbide coating (standard on RS, designed to resist rust if you’re a gentle driver and only using regen not physical friction to stop the car) and carbon-ceramics if you want to show off.

Then we get to the design. You can make your own mind up on that one, but I’m a fan. Pro-tip: try Tactical Green on the configurator, only for the brave. Wheels range from 19- to 21-inch, the larger rims with proper aero blades, matrix LED headlights are standard on the RS, with the sinister-sounding laser lights (doubling your high beam range) on the options list.

Note the grille – less cooling requirements means no need for Audi’s usual gaping single frame number, hence the block of body-coloured trim under the badge. The sinewy creases above the arches are a personal highlight, so too the full-width rear light – just below the pop-up rear spoiler. Carbon wing mirrors and a full carbon roof are available on request, says Audi. 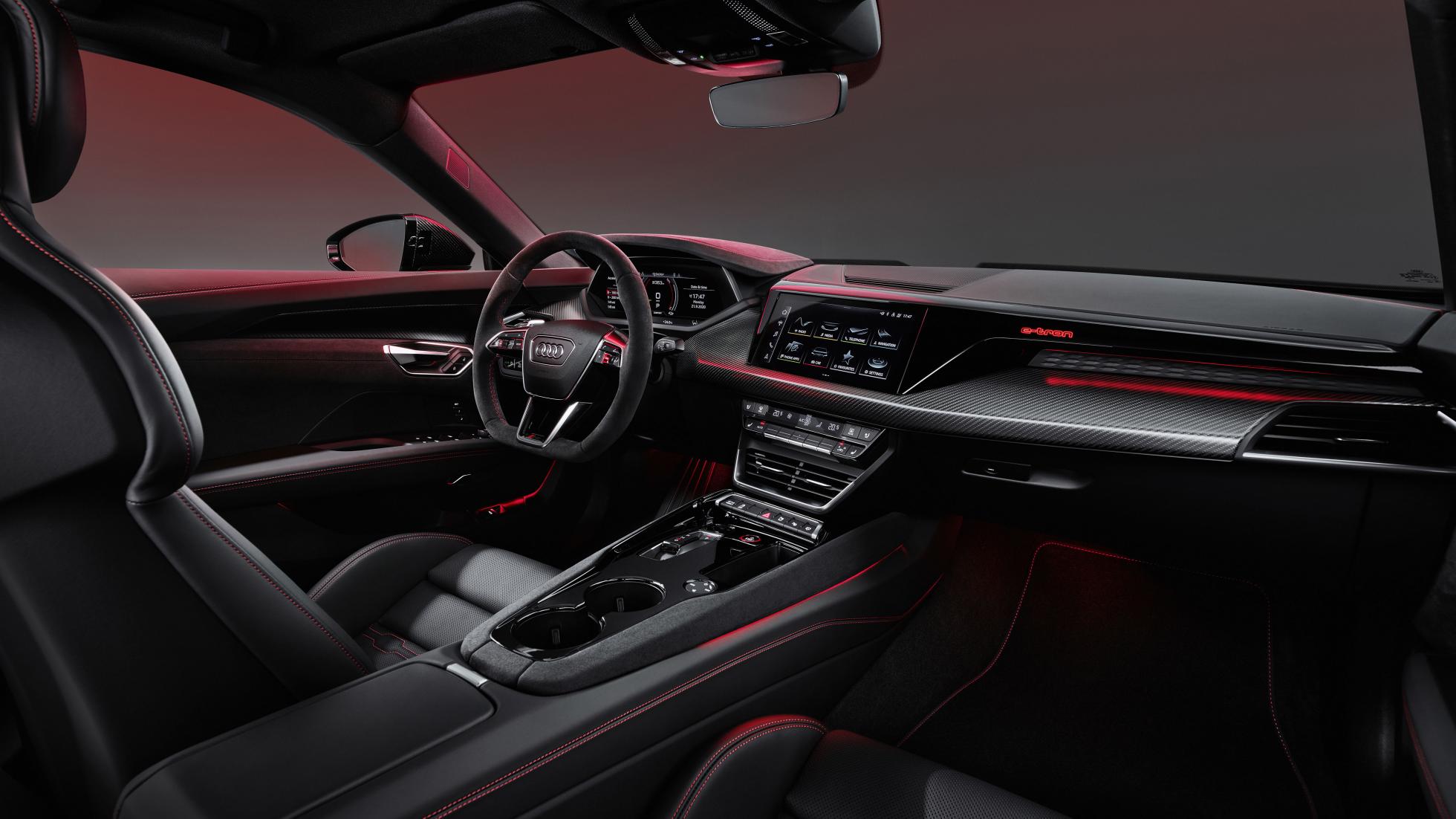 On the inside, rear passengers are treated to the same “foot garage” as the Taycan, a dimple designed into the skateboard battery to give your feet somewhere to go. Up front the dash is subtly tipped towards the driver, presenting them with a 10.1 touch display to go with the 12.3-inch ‘virtual cockpit’ screen behind the wheel.

Cow skin is available, but Audi is keener to push its leather-free interior, made with a “high-percentage of recycled material”. Sound-insulating glass in the windscreen is standard, and can be fitted to all windows as an option. We reckon not having a combustion engine will probably make it quiet enough.

Despite sharing its bones and gizzards with the Taycan, both cars won’t be built in the same place. The e-tron GT will be assembled alongside the R8 at Audi’s Neckarsulm factory, which puts a bit of a cap on the number it can build, initially at least.

Audi reckons “something in the high four figures” a year is achievable – so a 10,000-unit ceiling – compared to the 20,000-odd Taycans Porsche flogged in 2020. And that number’s expected to grow substantially in 2021.