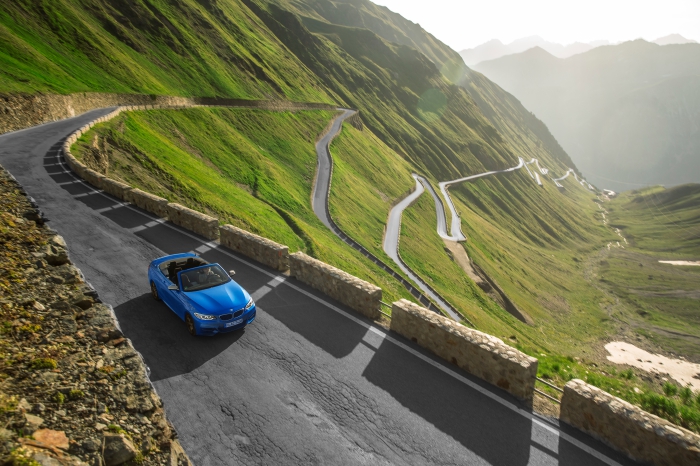 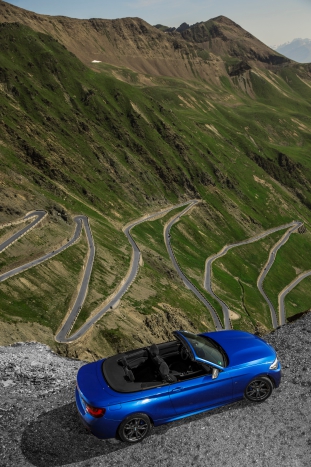 Passo dello Stelvio, Italy – The biggest fallacy is that the range-topping, most powerful models make the best driving companions.

It’s not hard to spot the folks who haven’t done a lot of winding road drives from their car choices at the rental desk, since they tend towards flagship models, thinking that the car’s status at the top of the performance heap equates to a similarly exalted driving experience.

If all you’re going to do is to bomb down the autobahn, sure, those will do just fine, since such big power comes in useful on Germany’s many derestricted highways. 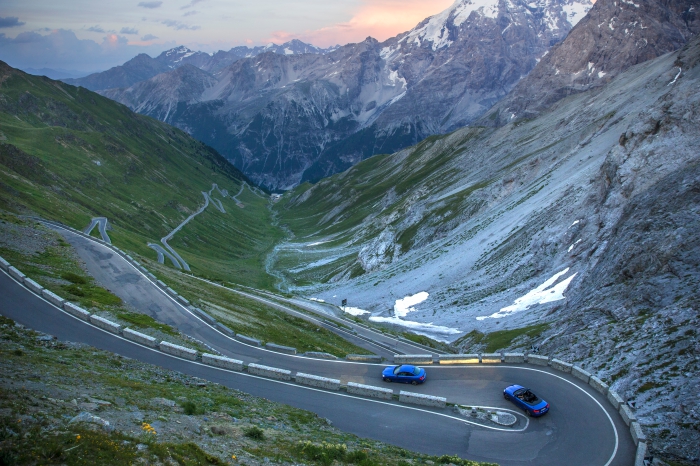 However, serious petrolheads – especially those from Singapore or similar land-scarce countries with more stops than go – want more than just top speed runs.

Naturally, hardcore drivers in Singapore would already be making regular pilgrimages up North into Malaysia for their B-road fixes, but nothing quite beats driving on some of Europe’s tastiest, most convoluted roads that are often regarded as the best driving roads in the world.

Couple the driving sights and sounds with a favourable S$/€ exchange rate and a borderless EU, and the stage is set for a great road trip that can cut across Germany, Italy and Austria for a group of like-minded mates. When the map starts to get all squiggly and scrawly, what you really want is something relatively compact (yet has enough storage to fulfill touring needs), agile and has good torque to pull you out of switchbacks and tighter corners to cut an effective path through the melee. 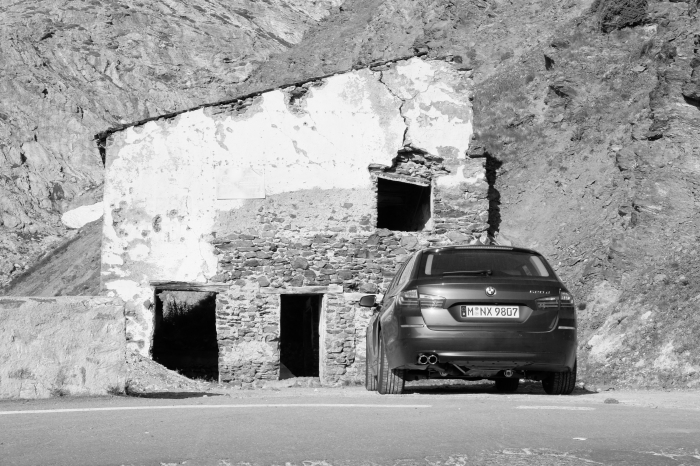 Of course, this means turbodiesels make decent candidates too, so don’t you dare snort in derision, but that’s not the nature of our lean machines in this instance. 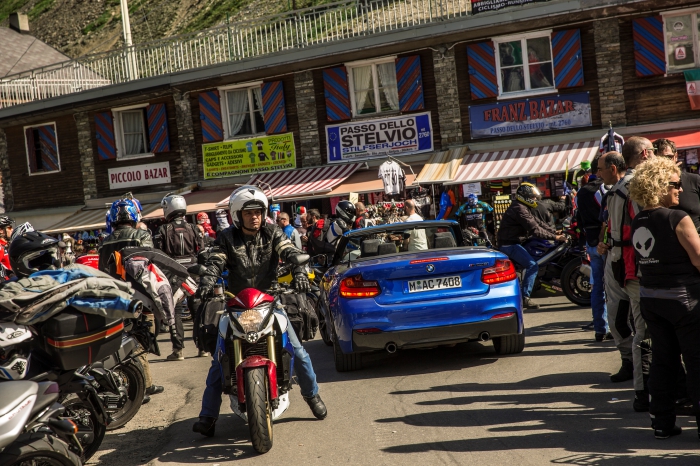 Whatever’s been waxed lyrical about Passo dello Stelvio could fill a library, but the iconic pass that straddles the Ortier Alps has its fair share of detractors. After all, Stelvio’s cult status is also its curse, with day-trippers, cyclists, motorbikes and all manner of other traffic choking the narrow arteries of its iconic wall of blind switchbacks, which still makes for the most dramatic photos. 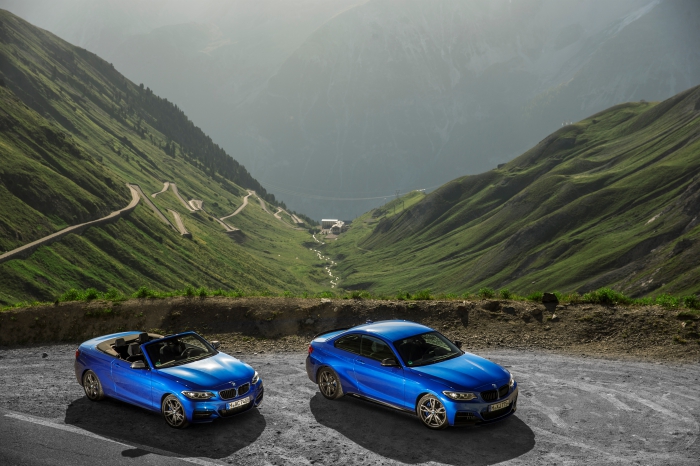 Our steeds for this summer in Stelvio outing are two variants of the spritely M235i, coupe and convertible, both in Estoril Blue, incidentally the same colour as the E36 M3 Evo we sampled so many years ago. With temperatures in the mid- to high-30s and cloud cover, the latter proves to be a cool companion with its top-down as we traverse the mountain range. 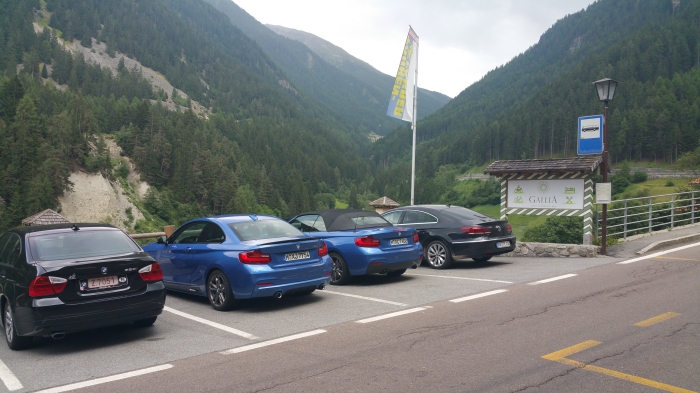 As we’re making the trip down from Munich, we’ve made plans to stay at least one night at the Hotel Gallia in Gomagoi in the region of South Tyrol (which links up to the SS38 that is the Passo dello Stelvio) – a warm-up blast away from the start of Pass’ familiar switchback ascent. Yes... those are bikes dotting the roads... this wasn't even the half of it!

As some others have rightly pointed out, getting a clean run up (or down!) the Stelvio is a matter of timing – it probably didn’t help either that the very weekend we were there saw the pass hosting the 39th Stelvio International Metzeler Motorcycle Meeting! We headed up that first afternoon to get a feel of the lay of the land to scout for photo-ops, but find it impossible to get a clear run until it started getting late, since the bulk of the traffic that stayed further away had to ride back to their hotels before it got too dark… and the hot food ran out! 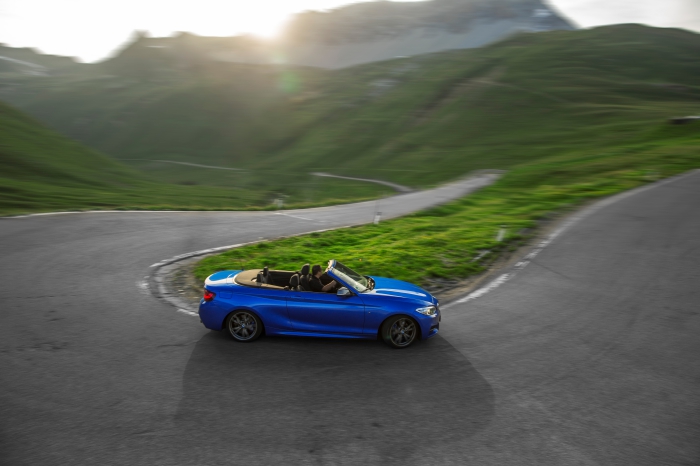 Thankfully, it was still pretty bright-out till about 9pm in early July, so we pretty much had the pass to ourselves and with one person, in this case our photographer, stationed near the top of the stack of tight switchbacks with a walkie to let us know if there was oncoming traffic.

With that concern largely out of our heads, it was possible to commit more readily to tackling each blind corner and we’re not kidding when we say the roads were deserted by then. Of course, we would later discover the price for this commitment (a hot dinner!), but in that good hour, the pangs of hunger play second fiddle to the heady highs of tackling the pass. Our photographer 'lying down' on the job!

As anyone who has ever been involved in any sort of ‘action’ photography will tell you, getting the perfect picture requires plenty of ‘takes’, which in this case meant repeated runs up and down the ‘wall’ – not that we were complaining of course, since this was good practice for the following day. We grew to love the terrible twins over the two days, because the M235i’s form factor and proportions remind us a lot of the original E30 3 Series. Compact, great visibility out and in this case, packs sufficient firepower from its turbocharged three-litre to really give bigger cars a run for their money, especially when it comes to overtaking on the narrow winding roads.

That’s not to say the M235i’s talents are only relegated to b-road blasts either, because on the derestricted bits of the autobahn, both cars touched their 250km/h top speed effortlessly and comfortably. For whatever reason, detractors continue to think of these M Performance Automobiles (MPA for short) as half-a$$ed cars that aren’t as good as their full-fledged M brethren, but that’s just ignorance talking, or at the very least, someone who rates cars by the bucks spent, or on pure straight-line speed alone – hopefully, we don’t count any such close-minded folks among our readers. 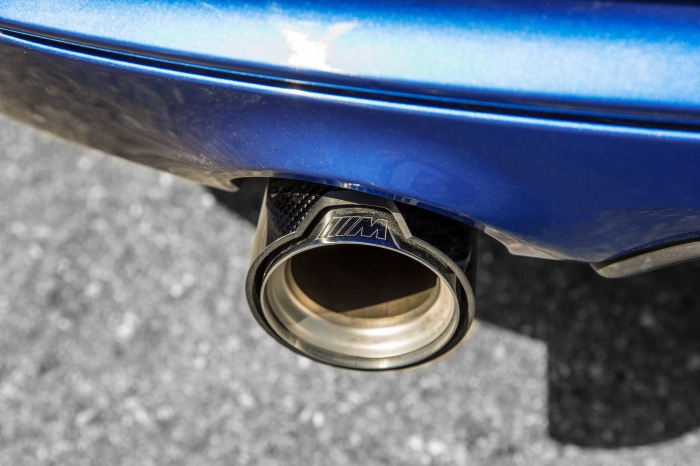 As a driver’s tool on real winding roads, the M235i is precise and a rear-drive hoot that will happily keep up with and likely carve up whatever over-powered brute you’ve brought along.

On a technical track, it is good fun, but the MPA’s concessions to daily-drive sensibilities mean its factory set-up is compromised for hardcore track use, since that’s not the car’s raison d'être to begin with. In Singapore, it’s hard to love convertibles, since day or night, the air tends to be hot and humid, but in the Passo dello Stelvio it makes perfect sense especially since having the top-down lets you enjoy the super-bass rapidfire of the two cars’ exhaust notes as we work our way up the pass. Our test M235i Coupe is equipped with optional M parts, which adds to its performance cachet, especially the Alcantara steering wheel and fruity sports exhaust. The Convertible is closer to stock, and we’ve yet to try either variant with the optional mechanical limited slip differential that we’ve heard such great things of and can be dealer-retrofit to existing cars to sharpen up an already-compelling performance package. We don’t like slippery leather in sportscars either, so the factory fabric that clads the seats in both cars is a welcome touch.

The 220i Convertible was a revelation, and we were impressed by how much fun it was, not just because of its top-down shenanigans either. There was an innate cheeky balance to the car that was practically gagging to be flogged hard. There was some concern a M235i version would be ‘over-engined’ and lose that sweet balance, but as we were to find out, it’s everything the 220i was… only with more firepower in its arsenal, yet not too much that a driver isn’t able to properly exploit it. Given the 150kg kerbweight difference between the Convertible and Coupe, the rigid Coupe does feel more responsive, almost explosively so, as you struggle to catch a quick breath in the corners before you’re hurled onto the next straight and then the pleasure-pain starts all over again. Grip, fun, sound and power, the M235i has all these qualities in spades and more, and our goings-on around each of the multitude of tight corners was all the more pleasurable thanks to the responsiveness of the compact critter’s turbocharged 3.0-litre straight-six that was mated to the slick-operation of the 8spd auto. Its proportions make it easy to place precisely, which takes a lot of the stress out of hard driving in confines as tight as the Stelvio Pass. Beyond the wall of switchbacks and past the village that boasts hotels, little church and souvenir shops, the roads open up but instead of walls or oncoming traffic, there’s also the danger of plummeting over the edge of the road, so we reckon small and nippy proved its worth a lot more than brute and bulky. On the other hand, there’s a natural fluidity to the Convertible that lets you press hard with the rag-top down and the wind in your hair – it may not be the same sort of flat-out-brake-hard tarmac-shredding pace as the Coupe, but it’s possessed of a blistering pace nonetheless that we really enjoyed with the top-down, especially since it’s no wallflower in the sound department. Roof-down, the M235i boasts a beautiful, classically-inspired silhouette that doesn’t suffer from the big-bottom that afflicts the average retractable hardtop convertibles. Of course, this also meant that we could feel the eyes of the legion of militant riders of badly-ridden motorbikes and bicycles boring into us at every corner – after all, what place do foul cars have on a road as bewitching and beautiful as the Stelvio Pass, right? This is the BMW 8 Series GOLDEN THUNDER Edition

Golden. Thunder. We haven't made this up, promise...