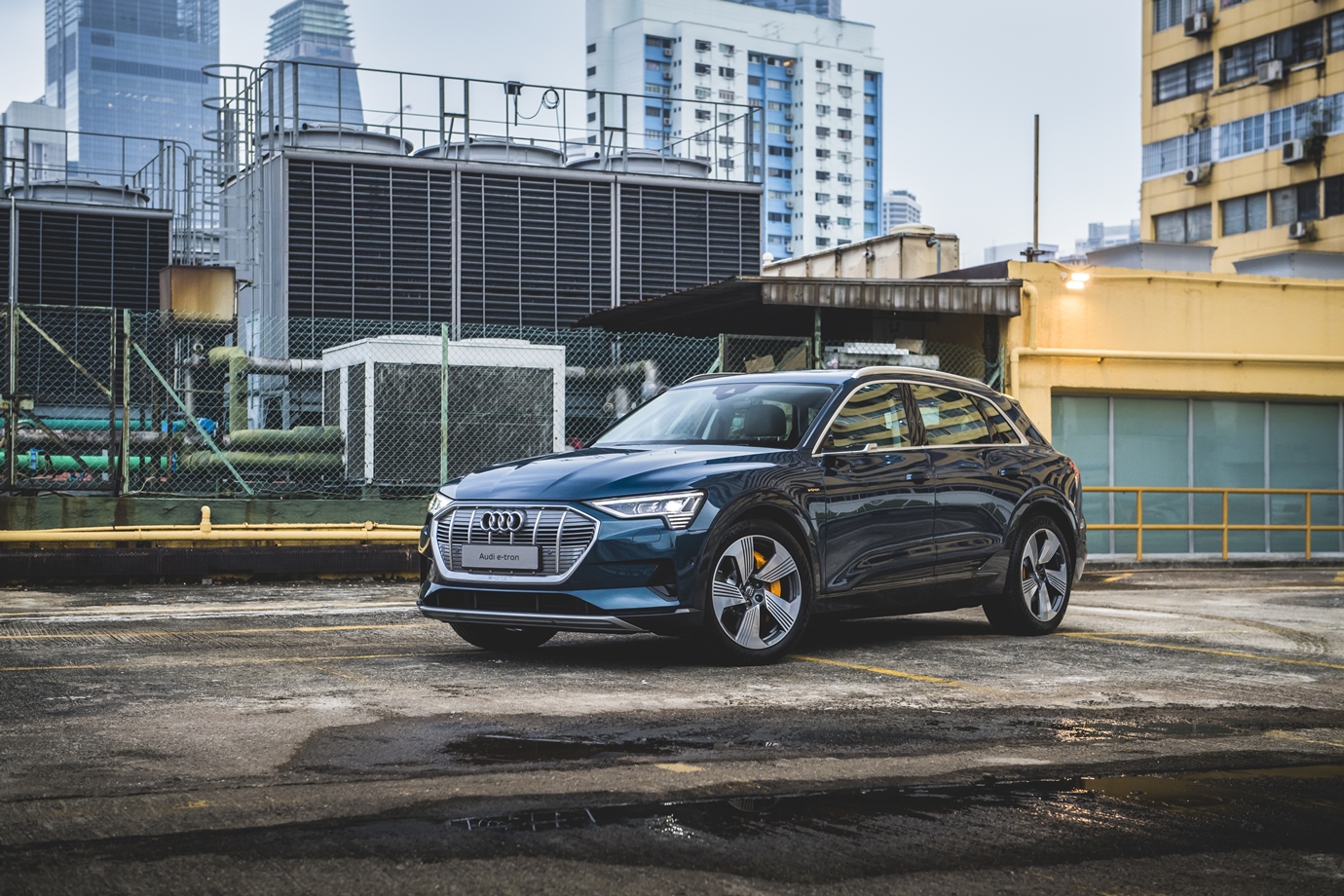 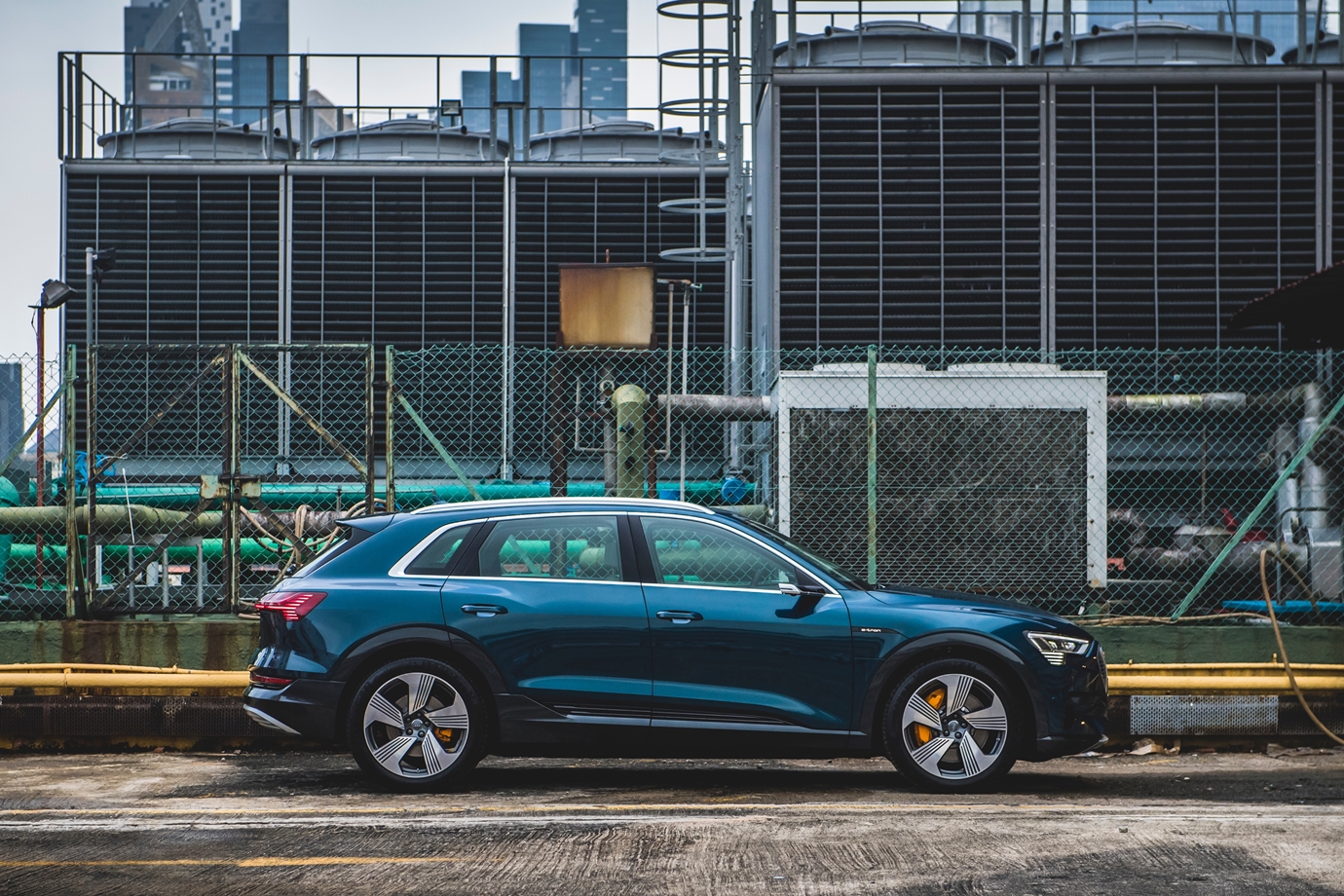 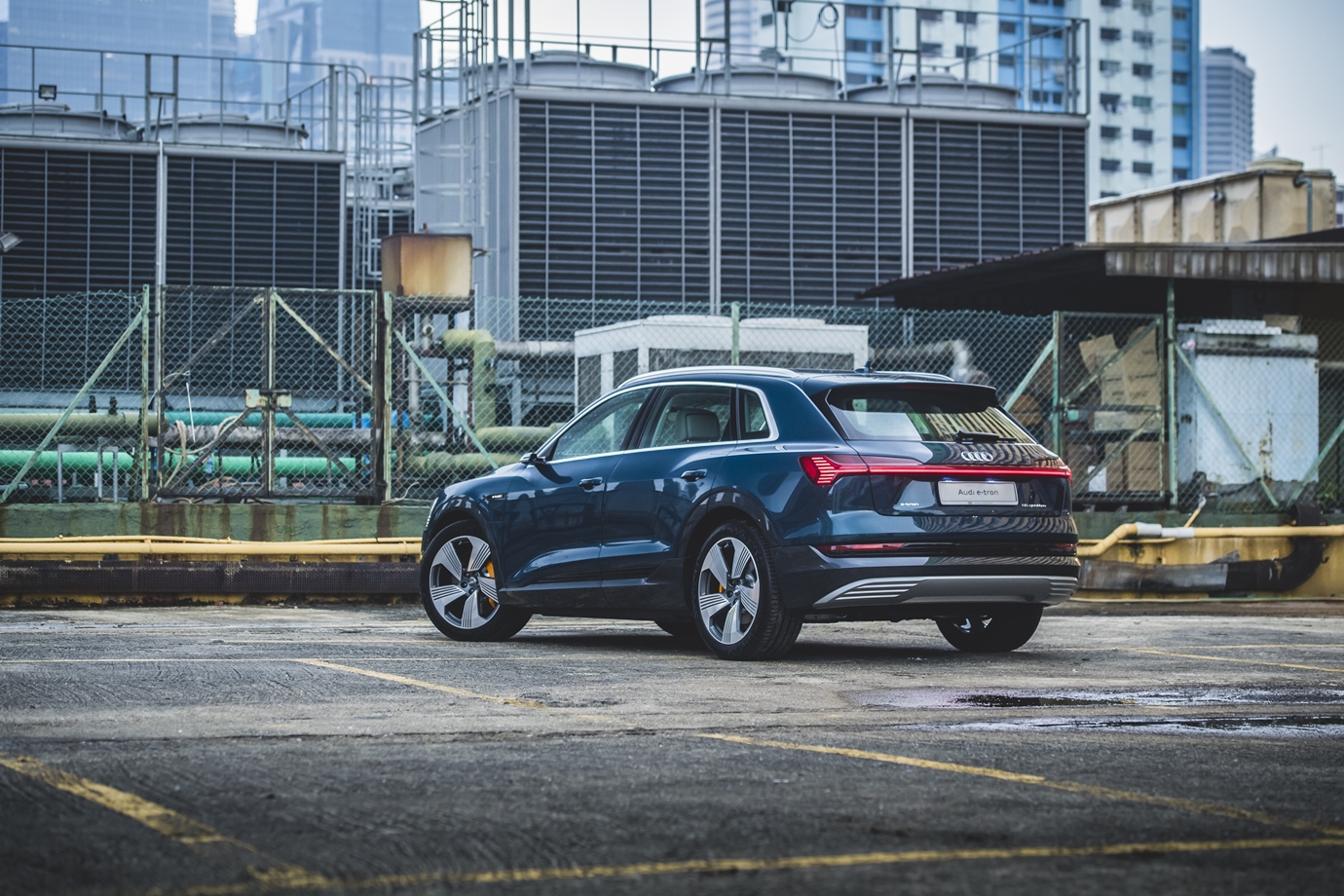 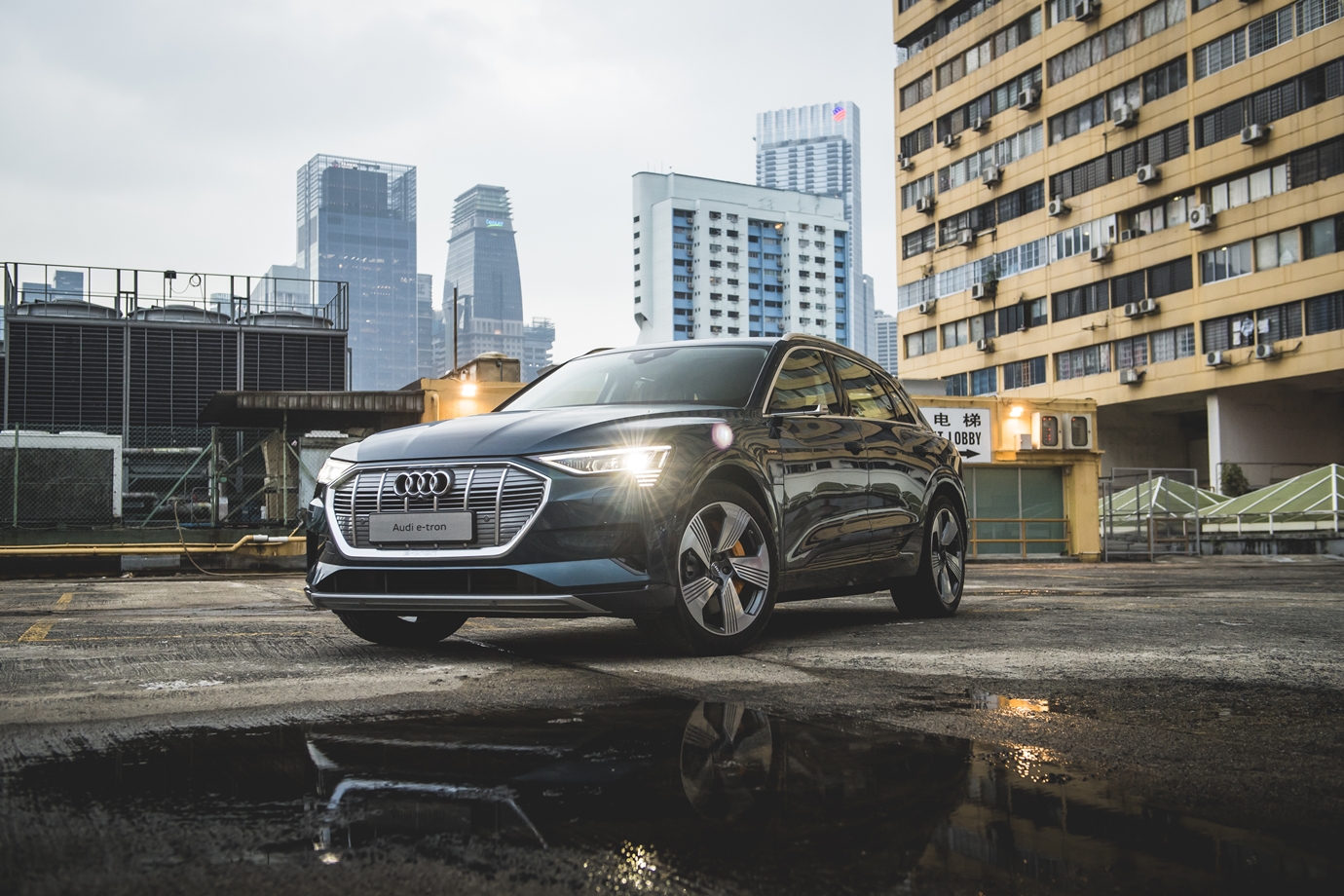 The pace of advancement in technology is better akin to stampede than saunter. After all, how soon is it that rumours of a successor model to the gadget we’d bought less than a year prior start being bandied about?

So, as we move into the age of electric vehicles, is that all they’ve become, appliances?

Price-wise, there’s ‘currently’ a wide range of electric vehicles available in Singapore, with offerings from BYD to the recently (re-)launched MG to Kia and now Audi, with the e-tron.

Audi intends for ‘e-tron’ to take on the same kind of branding as its ubiquitous ‘quattro’ moniker, and the first of the production e-trons takes the form of the popular crossover (or SUV if you prefer) – and can you say you’re surprised?!

In Audi’s case, ‘e-tron’ refers both to the model, as well as the brand’s range of EVs. Apart from the SUV, we can also expect an e-tron GT and an e-tron Sportback before too long.

(Click HERE to read the intro to our COTY2019 feature) 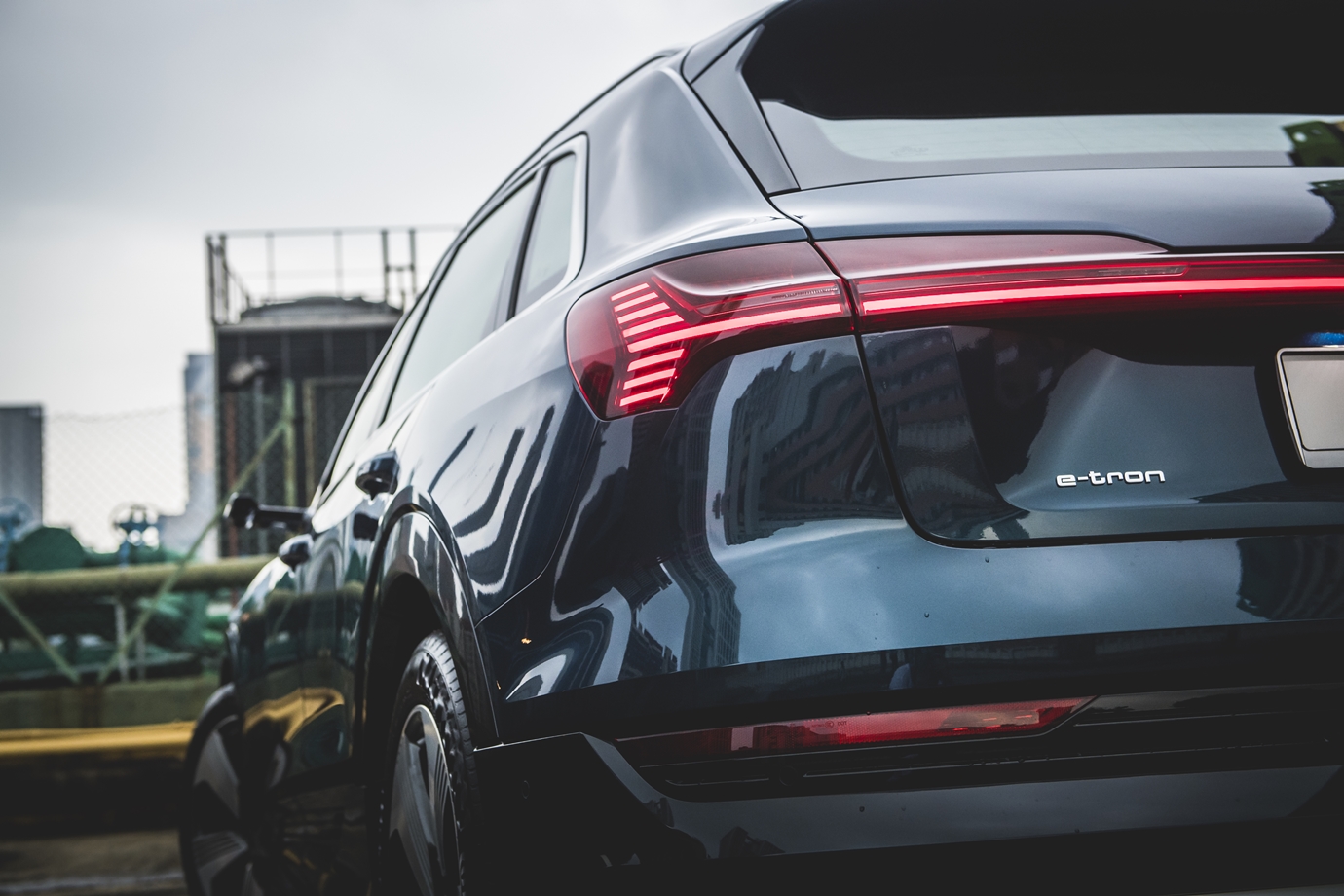 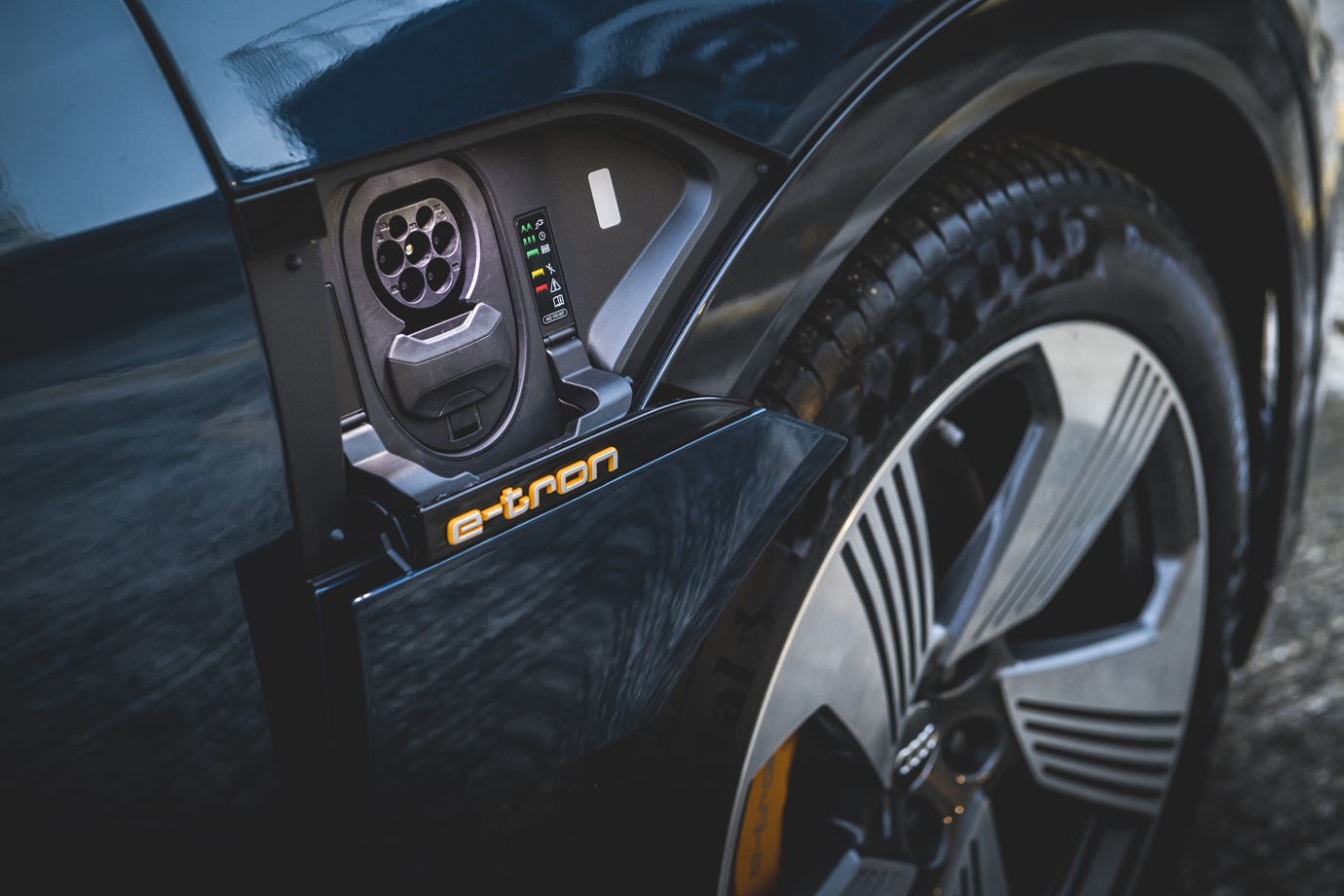 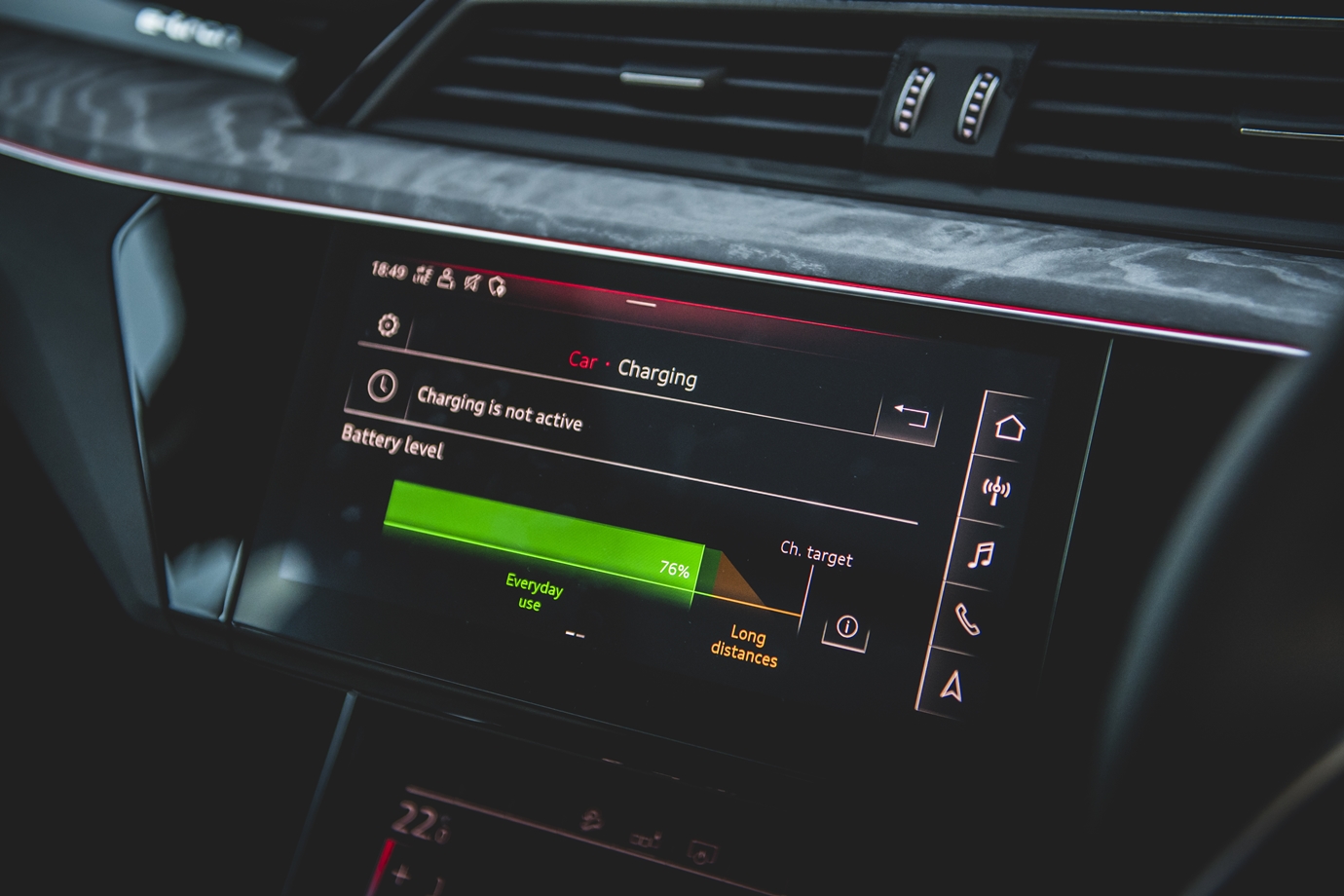 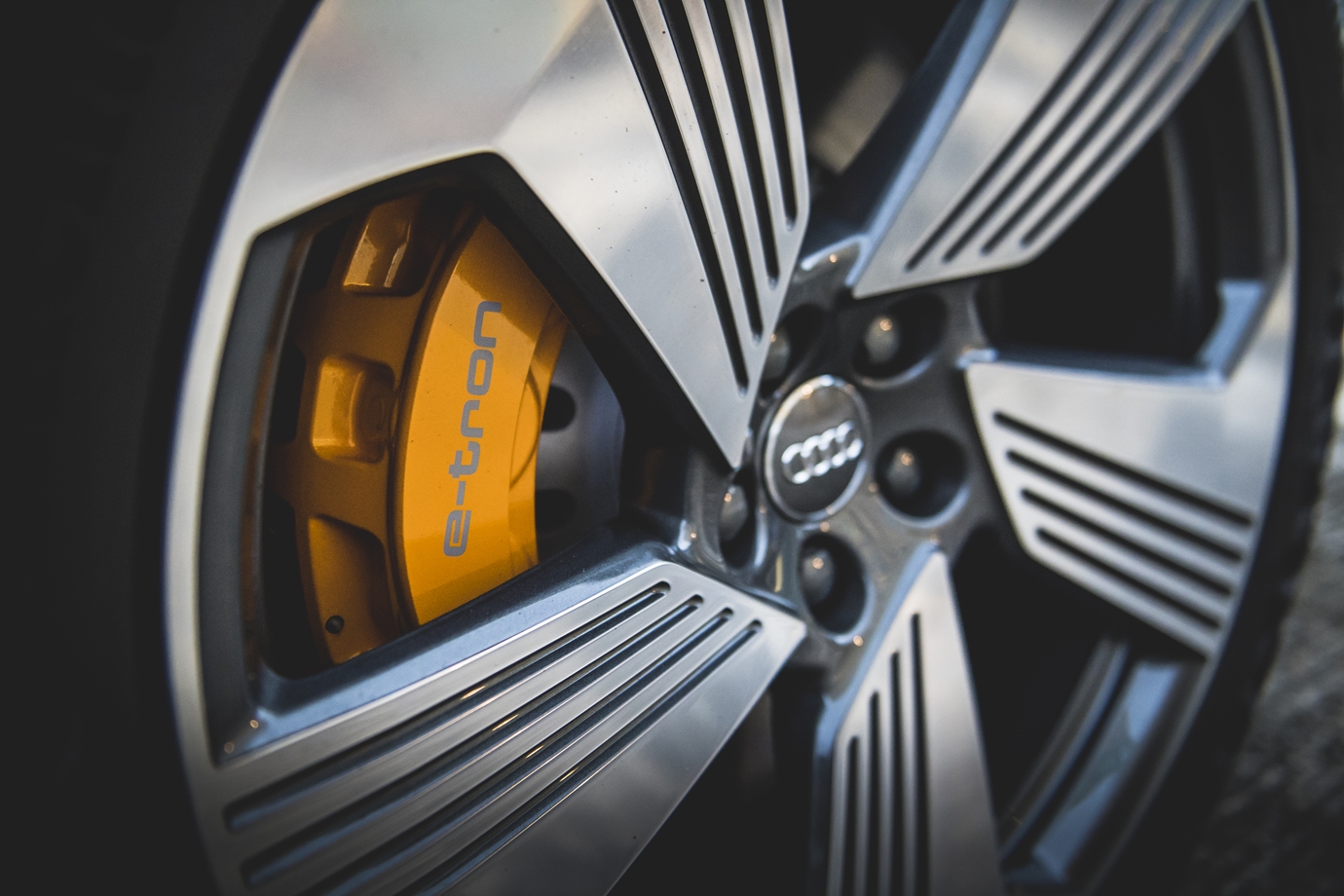 Singapore is still in early adopter phase as far as electric vehicles are concerned (as with most paradigm shifts, it takes awhile before more people jump on the bandwagon) – meaning that yes, people are talking about them, but no, they’re not really buying them yet.

Although cheaper Chinese and Korean alternatives are available, there’s still an implicit element of prestige associated with owning an EV from one of the Teutonic Trio (oh, and Jaguar too), not to mention the statement you’re making by ‘being first’.

We like how traditional car brands like BMW, Jaguar, Audi and Porsche are entering the brave new world of EVs, which serves as a good counterpoint against the incessant Tesla chatter (to its credit, Tesla has practically become synonymous with electric cars among car and non-car people).

Tesla’s marketing genius is probably rivalled only by Apple, with a similar legion of rabid fanboys that thinks the world of electric vehicles revolves only around Tesla, so it’s about time the car brands we’re familiar with start clapping back. 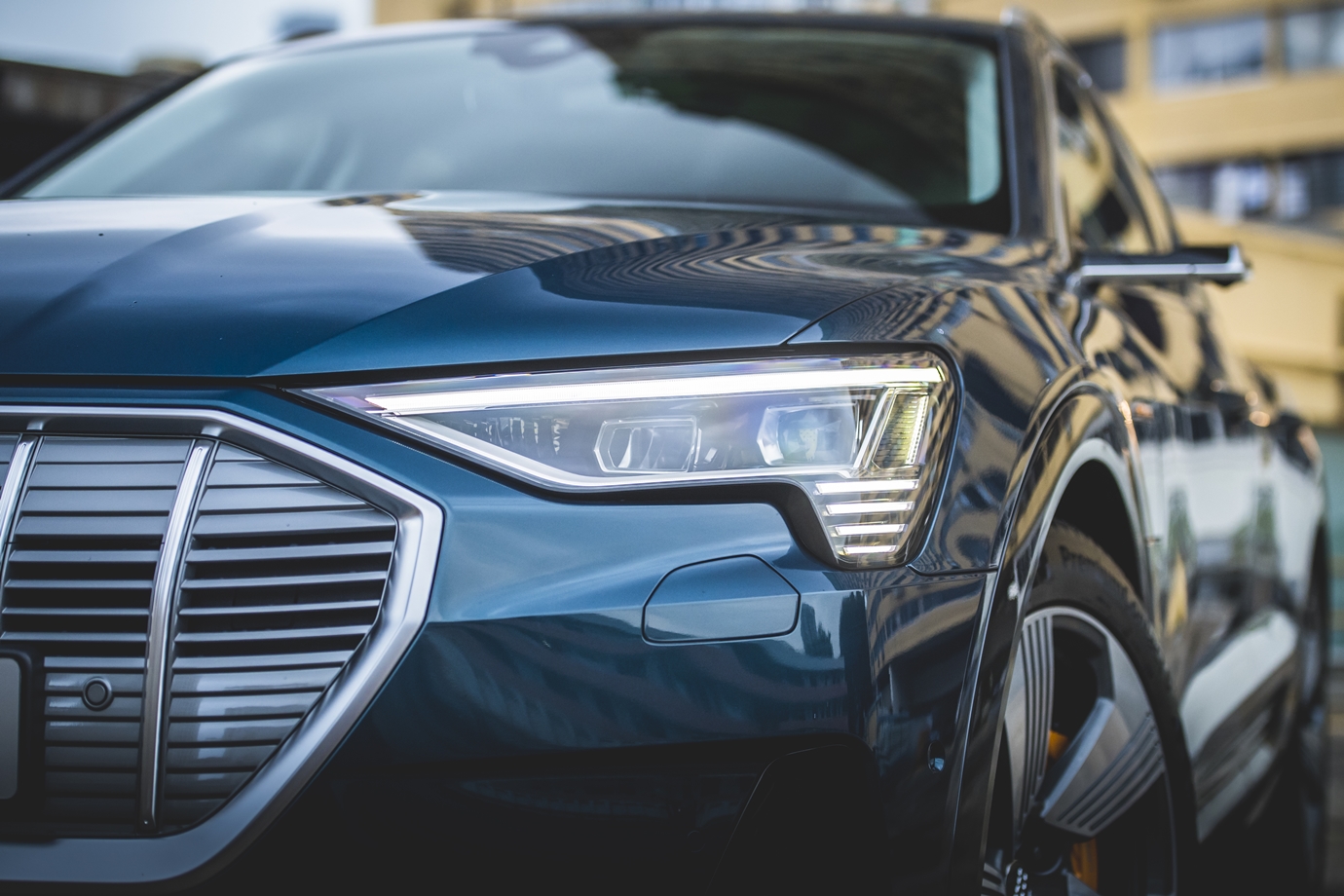 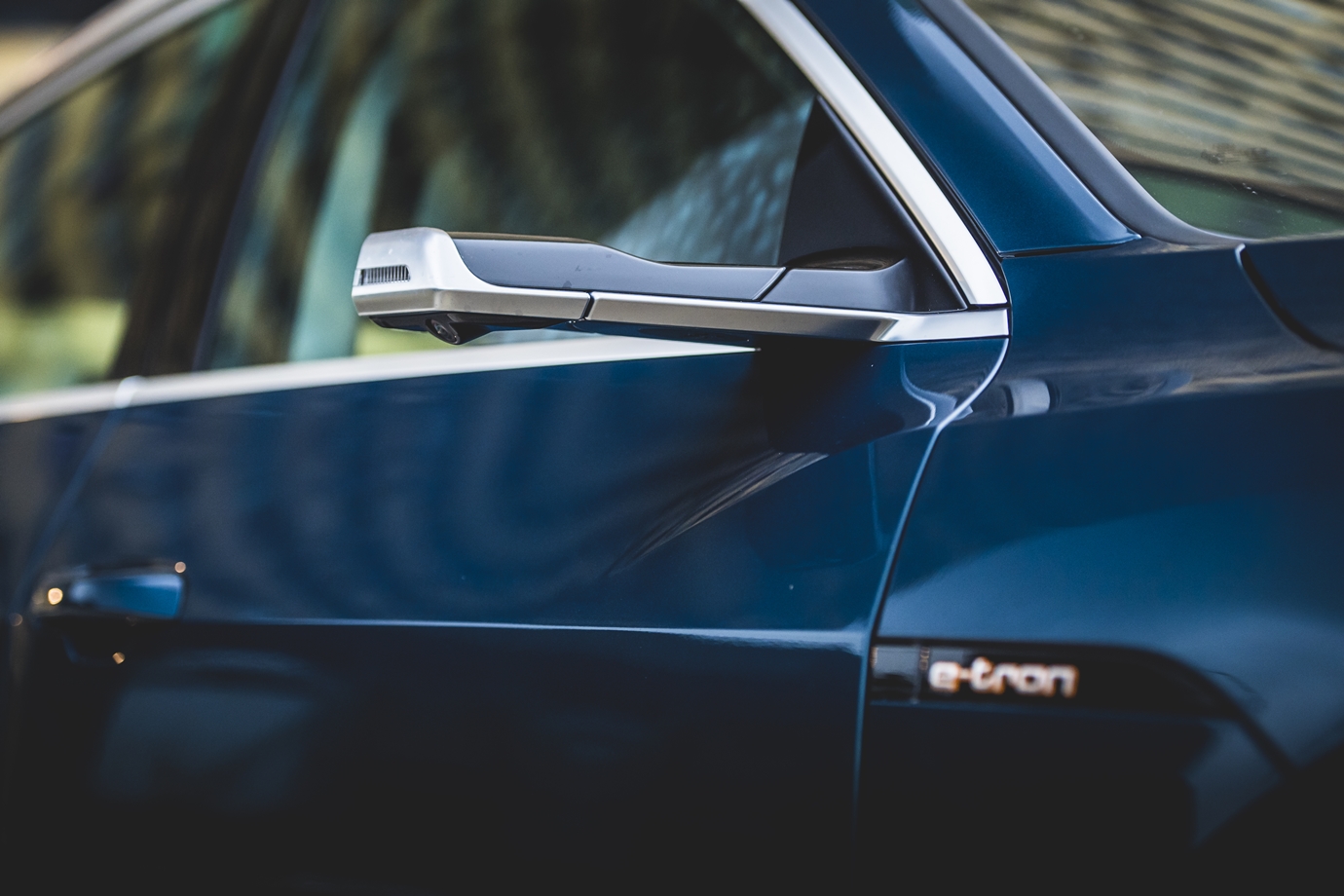 Call us old-fashioned, but as old-school petrolheads, we still appreciate it when a car doesn’t feel like it’s been cobbled together around an oversized tablet as the centrepiece, especially if it’s in the S$400k and up segment. The e-tron, for one, feels properly lux and never gives the impression you’re in a huge appliance.

We’re not tech-averse luddites here at the mag, because long-time readers will recall we had an electric vehicle in our Cars of the Year list from as far back as 2015, when we featured BMW’s cheeky electric city runabout, the i3.

Four years on has brought us to the e-tron. To outward appearances, the e-tron looks like a regular crossover – complete with Audi’s singleframe ‘Q’ model front grille – which we think will help ease folks into electric vehicle ownership.

Even with its alternative powertrain, the e-tron’s design isn’t intended to shock and awe with a futuristic avantgarde design, but sticks to a shape that is familiar.

To the casual eye, the e-tron could be any one of the brand’s sleekly-styled premium crossovers, that is, until you spot the ‘e-tron’ badging on boot and brake callipers, bespoke aero rims, charging socket flap and the quirky appendages in place of where wing mirrors normally reside.

The appendages house the cameras for the cost-optional Virtual Wing Mirrors, which project what you’d see with physical mirrors onto 7.5-inch OLEDs that are positioned on the insides of both front doors.

However, the displays are positioned a little lower than the field of vision we’re accustomed to when using physical wing mirrors, so it takes some getting used to. The Virtual Wing Mirrors aren’t just for show, because they reduce the vehicle width by 15cm and improve aerodynamic efficiency too, with Cd dropping from 0.28 (with physical wing mirrors) to 0.27. 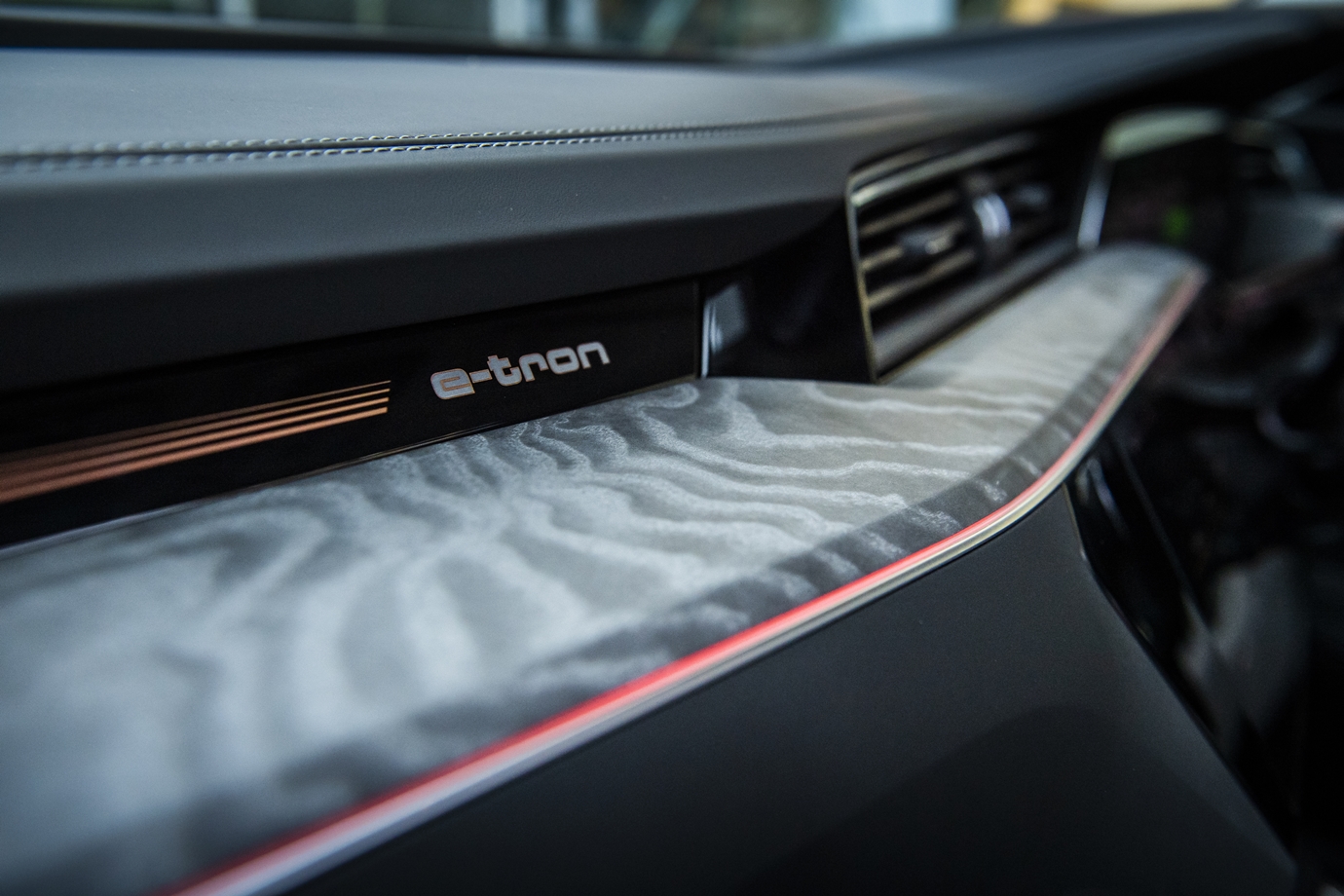 The cabin is familiar Audi territory, yet possesses a distinctive e-tron identity that is suitably underscored by e-tron specific powertrain functions and cabin technology, although a lot of the latter (like the seamlessly integrated twin touchscreens) has already started filtering into its top-tier models like the Q8 and A8.

The e-tron’s kerbweight tips the scales at 2.5+-tonne kilogrammes, but the battery system already accounts for 700kg. However, this is mounted below the cabin and bolted to the body structure at 35 points, so it manages to increase torsional rigidity by 27 per cent. If you’ve driven EVs before, you’ll be familiar with (and hooked to) the huge addictive hit of torque that materialises with just a flex of the right foot. In normal driving, the e-tron’s 95kWh battery will muster 561Nm, but this spikes to 664Nm in ‘Boost’ mode, which can be sustained in a burst of up to eight seconds.

The best part? You never notice the 2.5-tonnes it’s carrying! Flat-out, it’ll hit 100km/h from standstill in under 6secs (in Boost), but the e-tron is more than just a straight-line sprinter, because it acquits itself spectacularly when the goings gets winding as well.

(Click HERE to read about the Audi RSQ8, one of the maddest SUVs we've driven!)

There’s a surprising amount of driving feel to enjoy when you’re pushing hard, as we were during the media launch of the car – what’s amazing is how natural everything feels when you’re making swift progress as the system intelligently apportions drive across the four corners by braking individual wheels.

It’s possible to progressively and predictably adjust the car’s angle of attack by modulating the throttle so it’s fun enough but never fearful, since you do without the heart-stopping moments that can take a few years from your life!

It’s great that the current crop of premium EVs is evolving and tuned to be fun-to-drive instead of just being traffic-light fast, and this can only get better.

The impression that EVs are nothing more than eco-friendly beasts of burden is pretty last decade, so you might need to recalibrate your thinking to accept that they’re gradually becoming capable of offering fast and feelsome fun. And that’s no dream...