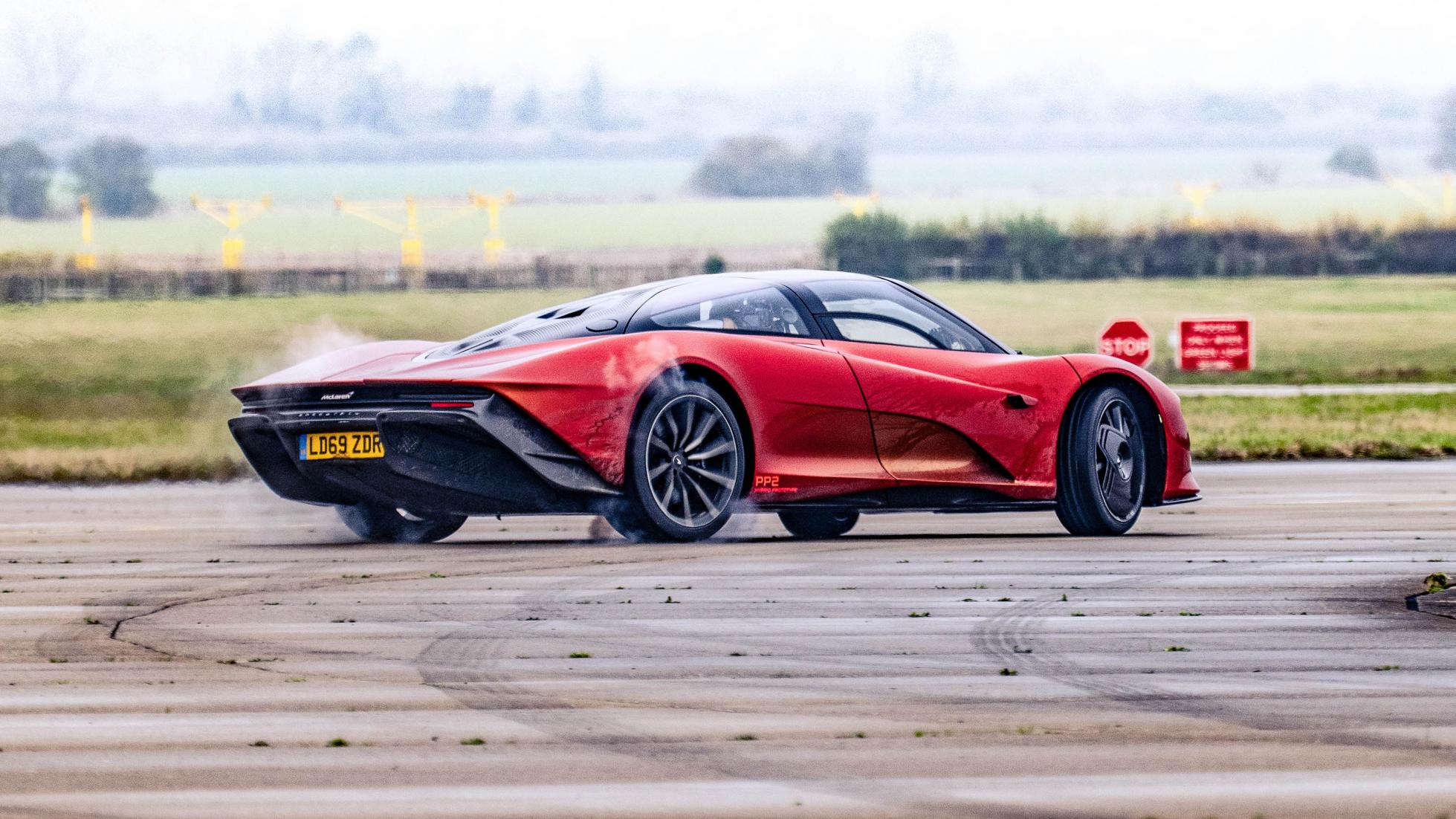 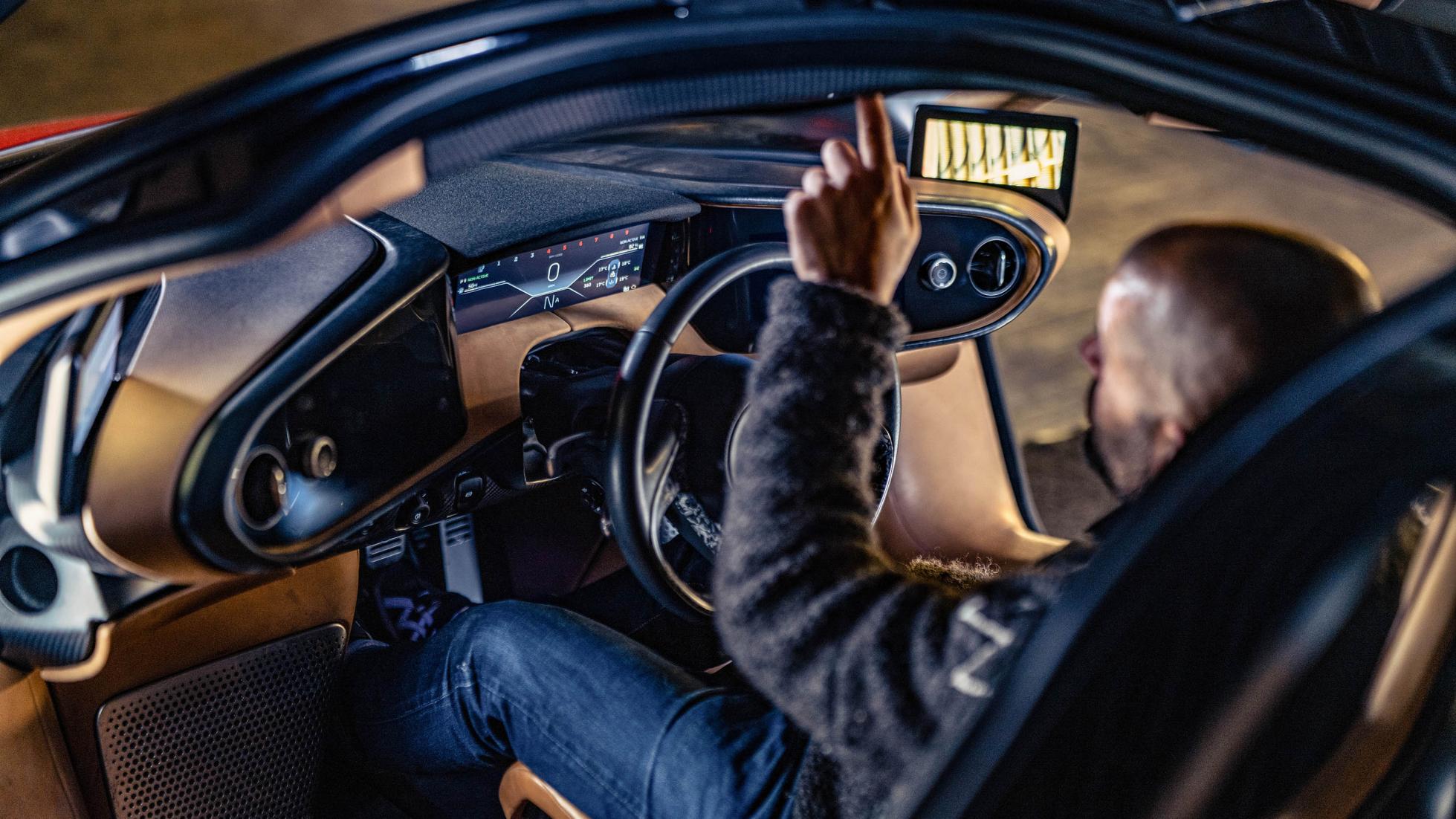 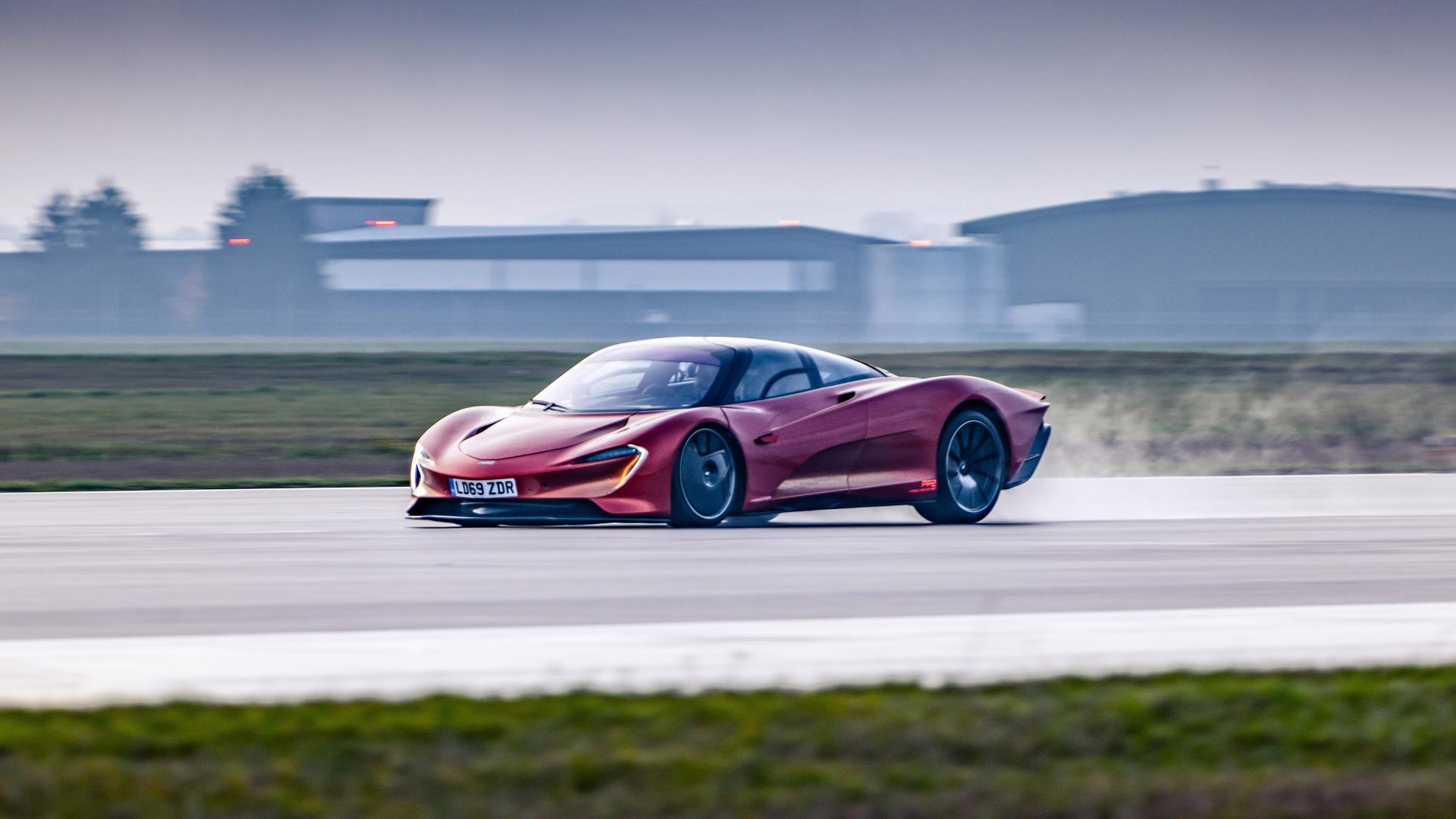 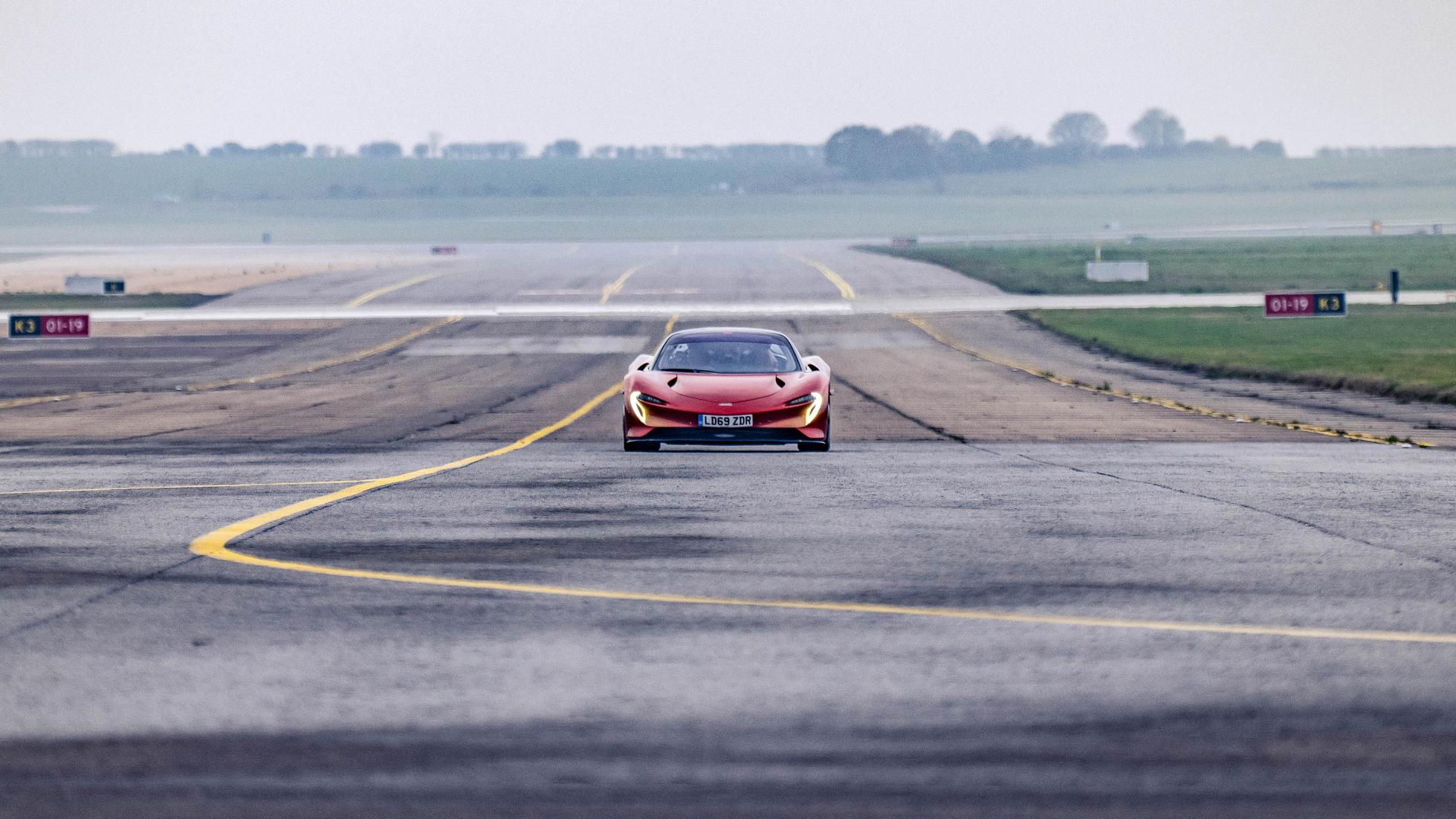 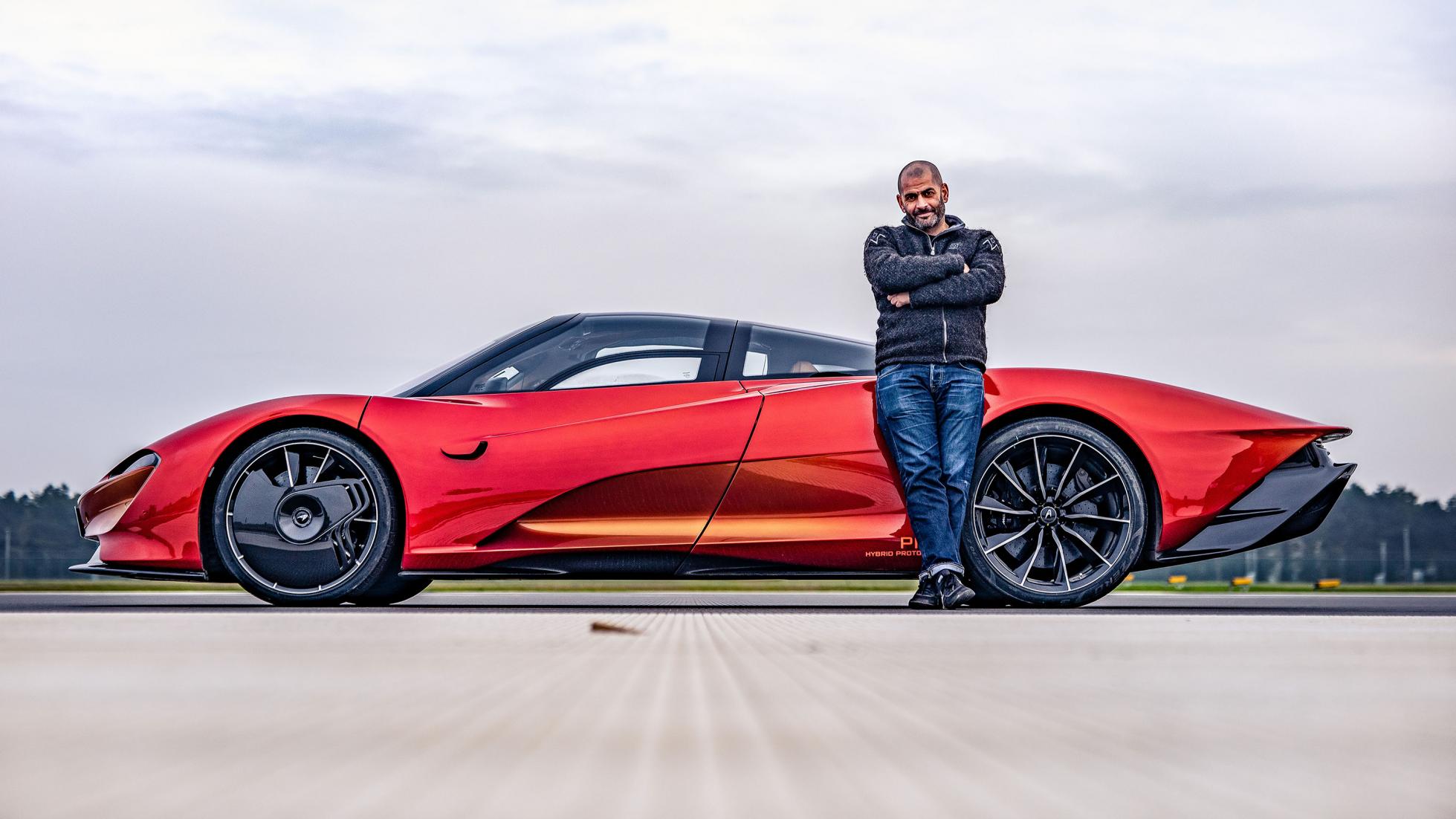 Someone cleverer than I am will be able to explain why placing the steering wheel and the driver’s seat in the centre of a car’s cabin makes it feel so special. Why it tugs at the emotional connection between man and machine so much more than it really should. I can only really speculate, but the moment you pop the McLaren Speedtail’s dihedral door and shuffle over a passenger seat squab and then settle into the slender, solo bucket seat, the price-tag becomes irrelevant.

Instantly, you are any of the things your inner car-child could possibly dream – a fighter pilot, a racing driver, a McLaren F1 wannabe. I did just this, and enjoyed a few moments placing my hands on the wheel and enjoying the symmetry afforded by a central driving position – actually, maybe that is the answer to the question. We’re told that the key to human designations of true beauty lie in symmetry, and the way the identical views left and right of the familiar McLaren rev-counter register is just immensely pleasing.

Increasingly, the static drama supercars can generate is the currency on which they trade – the opportunities to use any of the performance are just too infrequent. As-quoted performance has become less and less important, the need to dazzle with bizarre styling and violent, aggressive shapes has set in and, gradually, the supercar has transformed from being an object of beauty to an ugly collection of jarring angles.

The McLaren Speedtail is the antidote to the aesthetic of ugliness. It is pure elegance and delicacy – smooth aerodynamic forms and deportment that instantly consign a decade of rank ostentation to the bin it so deserves to decompose in. How ironic that this shape – somehow simultaneously futuristic but clearly referencing beautiful forms from the past – should have come from the same place that gave us the unutterably vulgar Senna.

You will either love the way McLaren has perched a few added feet of carbonfibre onto the rump of a 720S, or hate it – but you can probably guess that I think it’s remarkably wonderful. And it is, in the finest tradition of car styling, primarily influenced by the intended activity of the vehicle itself – in this case, very high speeds. 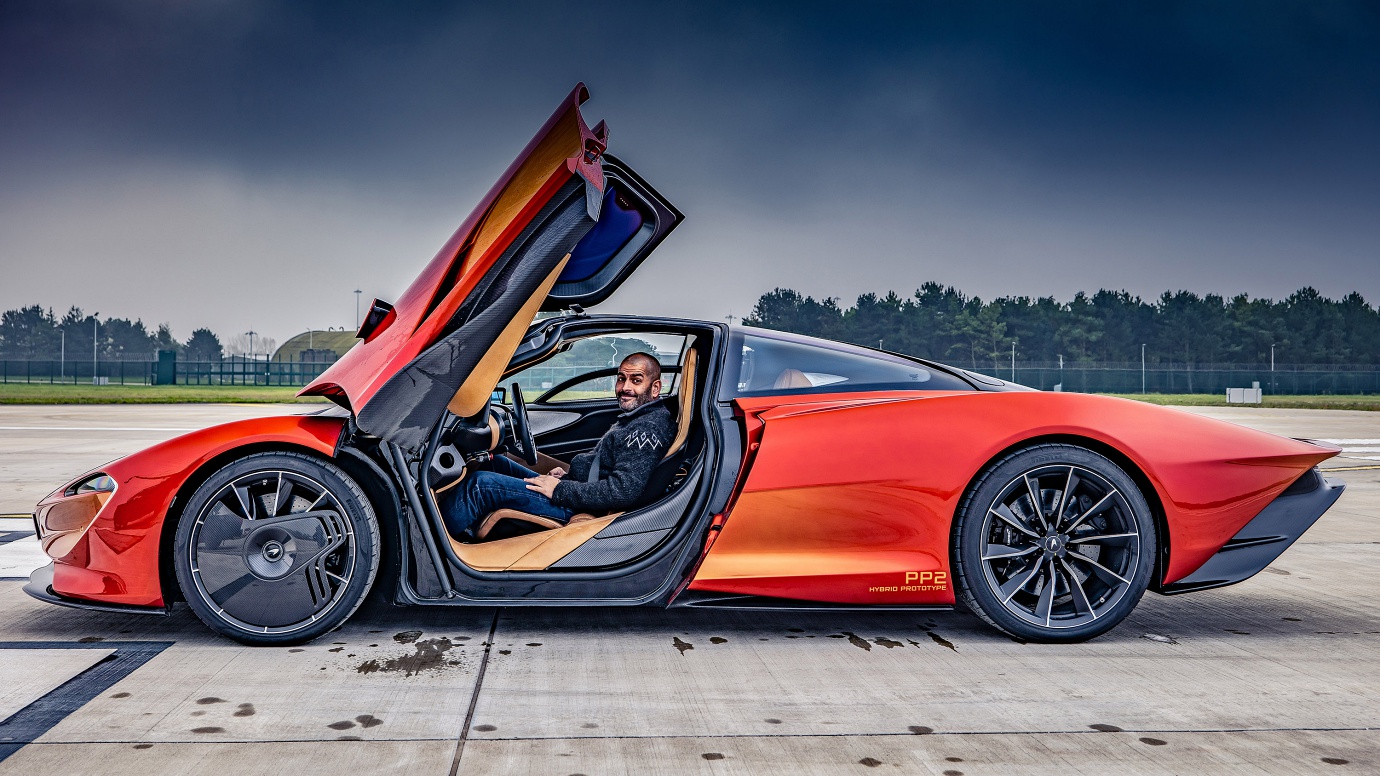 The Speedtail has a claimed top speed of 400+km/h. Having driven a Chiron and felt the way the McLaren pulls north of two hundred, I can only say that claim seems very conservative.

Until now, the real speed kings – the Bugattis and Koenigseggs and Hennessey Venoms – have bullied their way into the serious 300s through brute motive force, but this car slips through the air with the type of disconcerting lack of drag I haven’t experienced since a Jaguar D-type scared the s**t out of me at Le Mans.

Still, big numbers require big numbers, and this car has 1,050hp from a hybridised 4.0-litre twin-turbocharged V8, feeding a dual-clutch gearbox, pounding into the road surface through only the rear tyres.

Minnow stats compared with a Chiron, but the Brit counters with a bantam 1,430kg kerbweight which leaves its power-to-weight figure much closer to the Big Bug than you might imagine. And, boy, does it deliver something worthy of those figures.

I probably wouldn’t have chosen a damp airfield as the place to find out just how fast this car feels – the airfield bit works just fine, but I could have done without it being wet. With the traction control set to Track mode for the lightest hand of intervention, the Speedtail is managing wheelspin in the first three gears.

It smashes through 160km/h in what must be around six seconds, but only when you’re into fourth does the thing feel like it belongs to a speed category that makes the Ferrari 812 feel about as accelerative as a Fiat 500. It’s absolutely savage – the temptation to stare at the rabid number changes on the speedometer is easily overcome by the need to look ahead, because it does wander a little bit as you approach 200. Nothing worrying, just a little looseness that would probably have Bugatti engineers yelling at each other and consulting laptops.

And it just keeps going, the combination of vast power pushing something so light and so slippery is utterly compelling. Perhaps the most intriguing and telling part of its behaviour is that when you do lift somewhere north of 350, the car doesn’t slow down much at all.

In a Chiron, the same driver input feels like you’ve smashed the brakes, such is the drag from its bodywork and wide tyres and the sheer friction and inertia of is vast all-wheel-drive chassis. The waif-like, rear-driven Speedtail glides with a serenity that makes you wonder if it might actually hit 320km/h with just 300hp.

I didn’t push beyond 360 because this car is one of those weathered and abused prototypes carmakers use to perfect the real thing. And the runway ran out. But the main question it left in my head was why McLaren hadn’t aimed for the higher top speed the car could so obviously achieve.

And then I recalled some of the crazy engineering solutions the man from Bugatti told me were needed north of 420km/h. Not only did Woking’s decision seem entirely wise, the subject didn’t seem to matter anymore. Two-fifty is plenty for me. It’s probably plenty for you – and the lucky 106 who will end up owning one of these.

If the styling is captivating, the message behind the Speedtail and how its maker imagines it being used is plain refreshing. This isn’t a track car. There will be no talk of lap times and all that balls – this is a road car, a grand touring super-machine in the mould of a Miura or a Daytona but extrapolated to a point where, if it were possible, it could travel as fast as a light aircraft.

This is the future we read about in Eighties car magazines, before congestion and crumbling road networks, before our species contracted its current, loathsome aversion for speed. “Why did humans of the early 21st century suddenly decide to hate speed?”, future history exams will ask. “Because they were d**kheads” will be the answer.

Does the three-seater arrangement work? Partially. Three six-footers will not fit – although we all know that large blokes shrink miraculously quickly when offered the chance to ride in something very special and very tiny. But those side berths are better suited to smaller humans.

So I’d suggest that the ideal journey for the Speedtail is probably one piloted by a single, potentially raffish gentleman accompanied by two smaller female companions; dashing from, say, Gare du Nord to Antibes for a spot of dinner and post-dinner horizontal athletics. Macage-à-Trois? 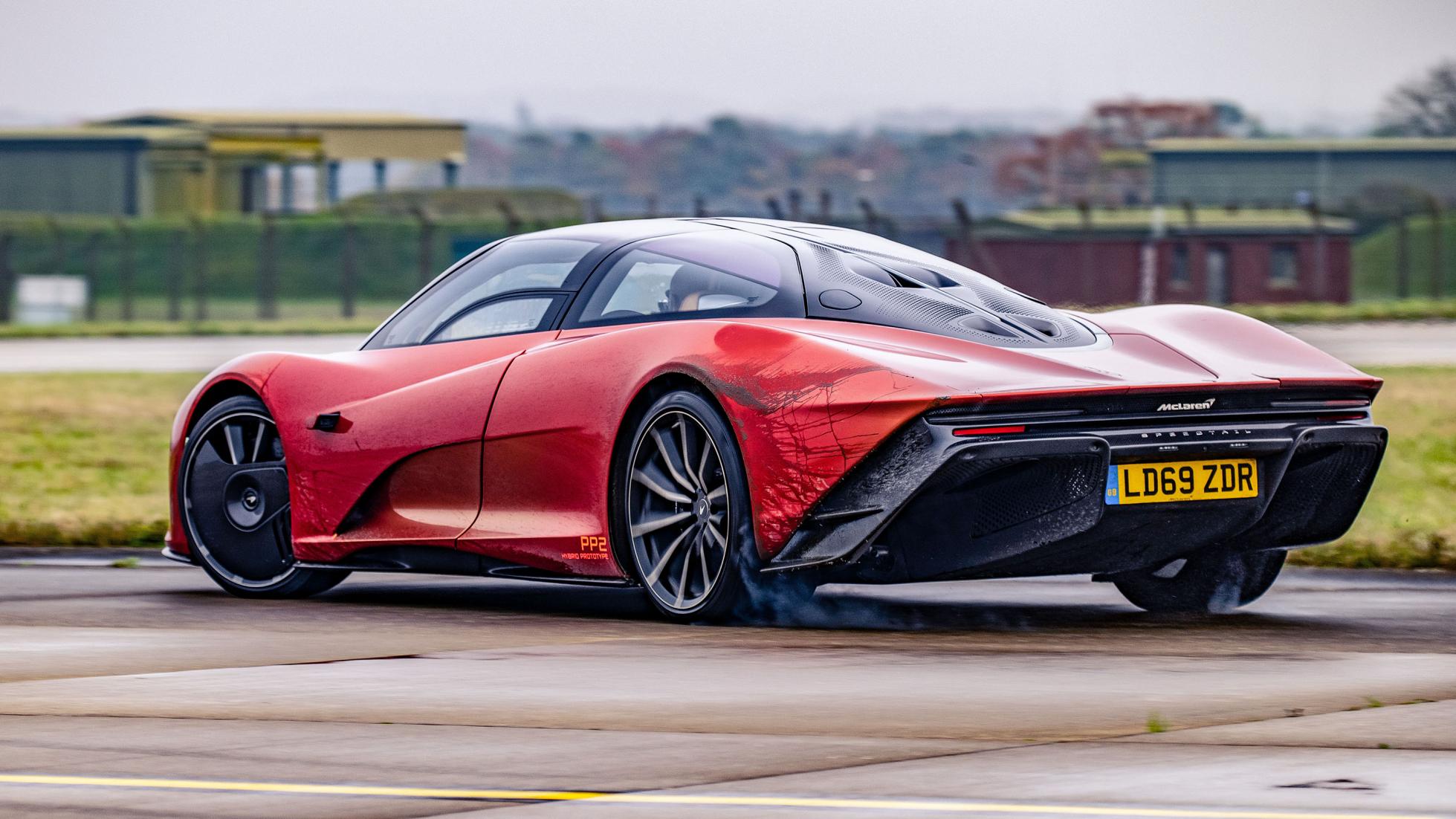 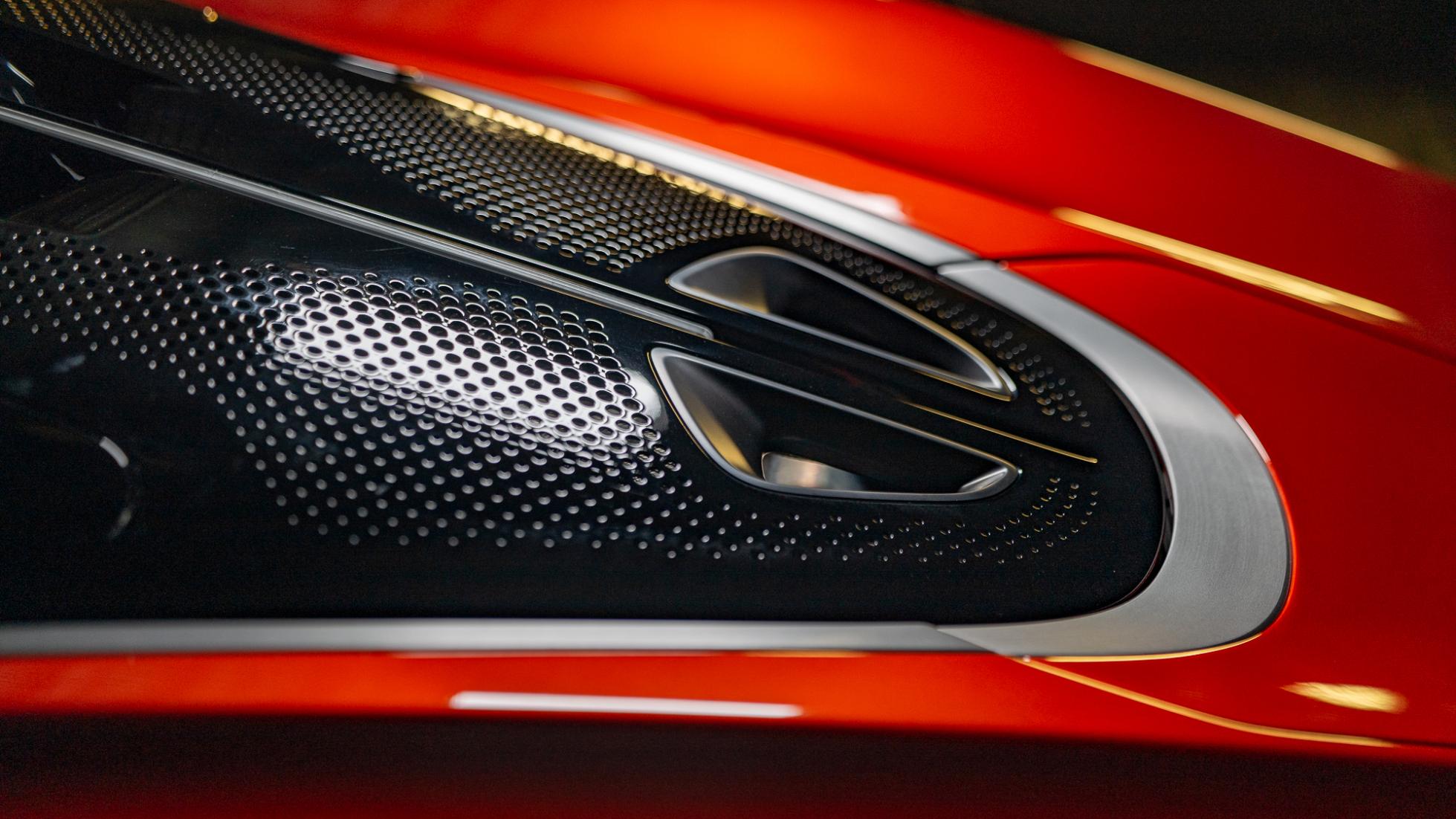 Other orientations are equally well catered for, so long as the shotgunners are below 5ft 8in. I suppose the school run is an option too, but I’m not sure you need quite this level of performance for that task. OK, the pragmatist in me has to admit that this car cannot carry two large adults in the way a normally configured GT can – and that is a little bit disappointing and does make something of a mockery of the decision to make it a six-cheeker.

But who bloody cares? Anyone with the bunce to afford one in the first place will already have many toys capable of filling that role, and just a few minutes plonked bang in the middle of that cabin will be enough to make you forget that Auto Express made coruscating comments about passenger headroom. This car is graceful theatre on wheels.

Suppose we ought to talk about how it goes around corners, too. I was a little worried about this bit because McLaren really only talks about the drag figure and the wheel spats that smooth airflow and the bendy rear wings that emerge at high speed.

The promotional discourse is all straight-line, so I feared they’d forgotten about bends. I needn’t have fretted – this is a slightly softened 720S underneath – a car so bloody talented it can easily spare 10 per cent of its agility and ultimate grip and still hand just about any other supercar its arse on a signed Jam album (obtuse Woking reference, that).

The horribly complicated hydraulic cross-linked suspension remains, as does the sense that sometimes it over-thinks road situations that don’t require quite so much processor thought. But the ride is freakishly level, the grip is brilliant even in the wet and the steering offers weight and feel in quantities that modern Ferraris so sorely miss. It’s a fun car to hustle and to slide – just be aware that at 5137mm long, you need quite a lot of space when that tush arcs wide. Whack that and you’d get a massive bill.

Said tush actually contains a very generous boot, so the Speedtail is also practical. The ergonomics feel less so at first – the desire to keep the dash clean and symmetrical means some buttons lurk underneath the dash itself, but also allows a bunch of switches to sit above the driver’s head. And as we all know, fiddling about with a roof panel is only beaten in the cool stakes by, er, having a steering wheel in the middle.

So, in the nonsense world of the hypercar, the Speedtail really is something quite different. I think it’s the most interesting, compelling car McLaren has made since the P1, and I sincerely hope other carmakers will be inspired by it and jettison the era of ugliness. 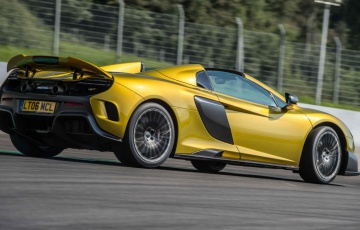 Which McLaren supercar is which?