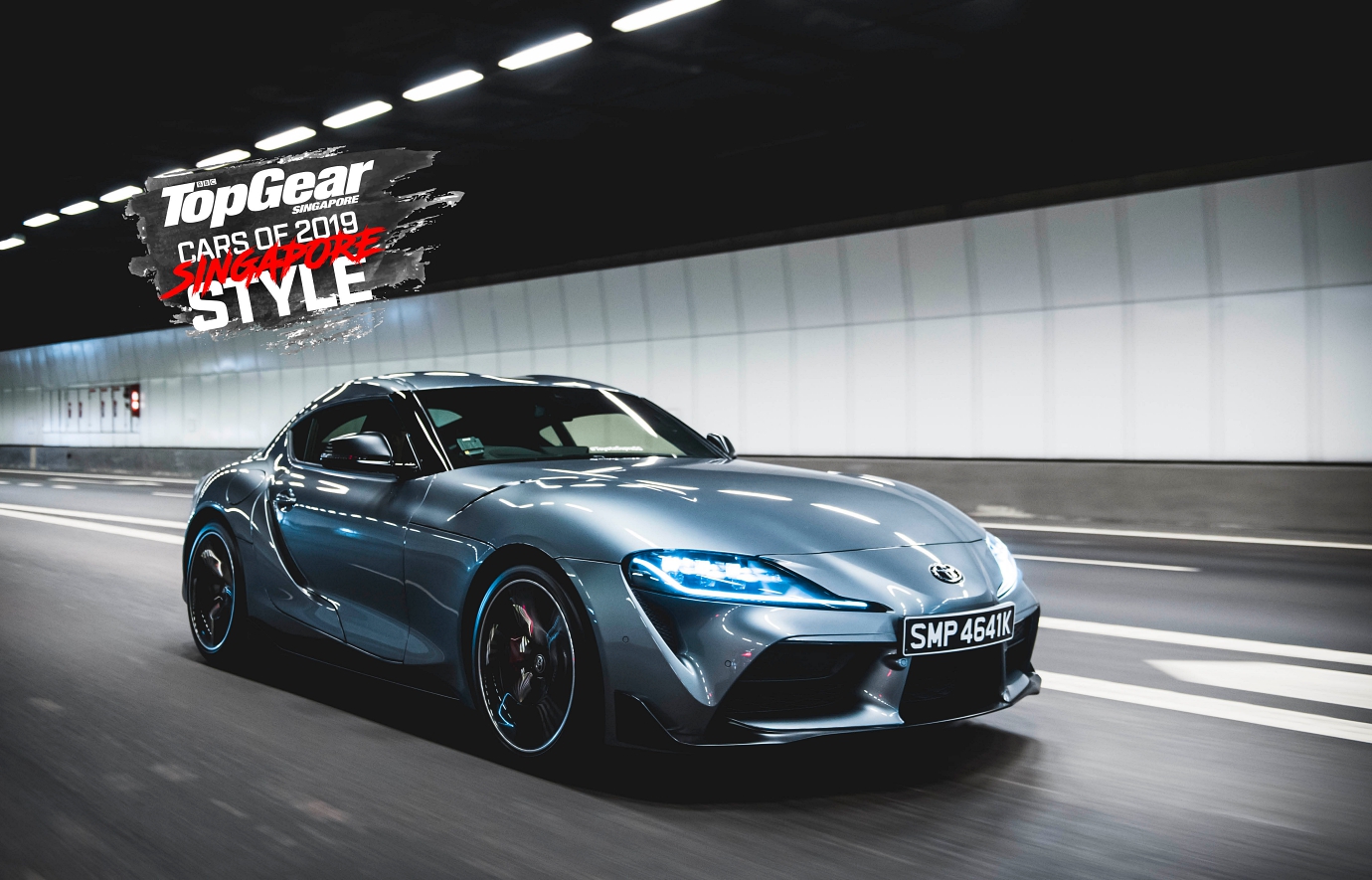 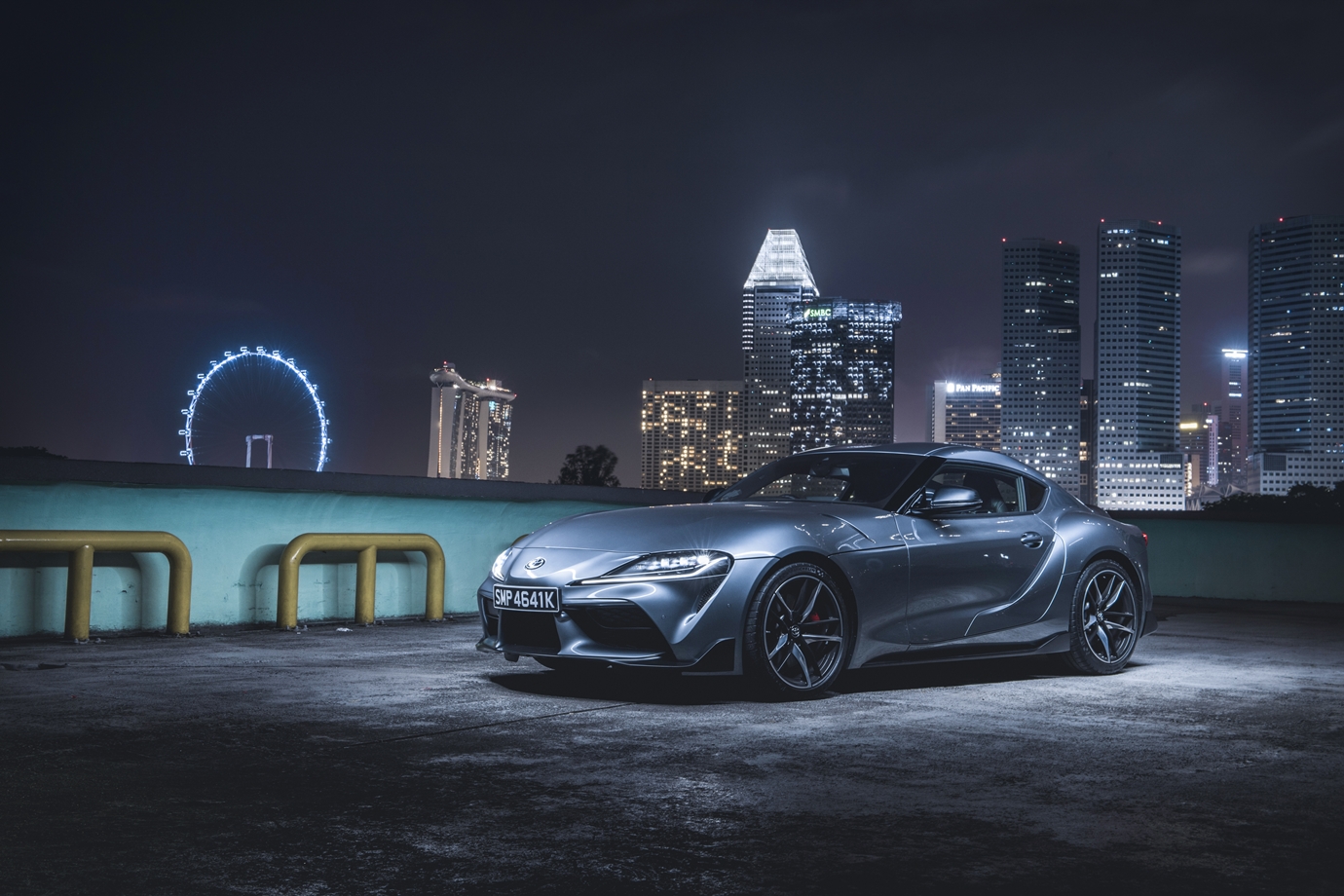 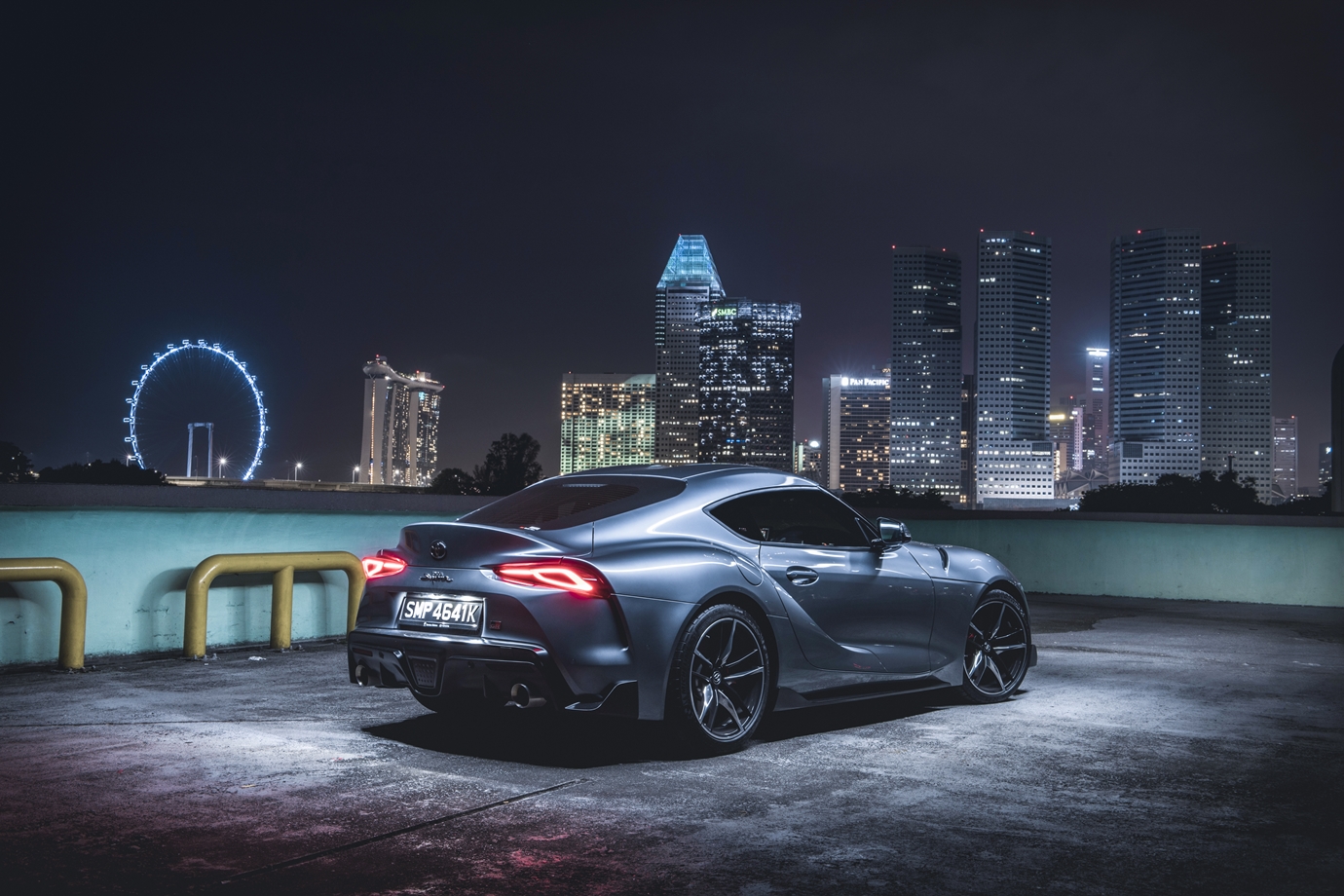 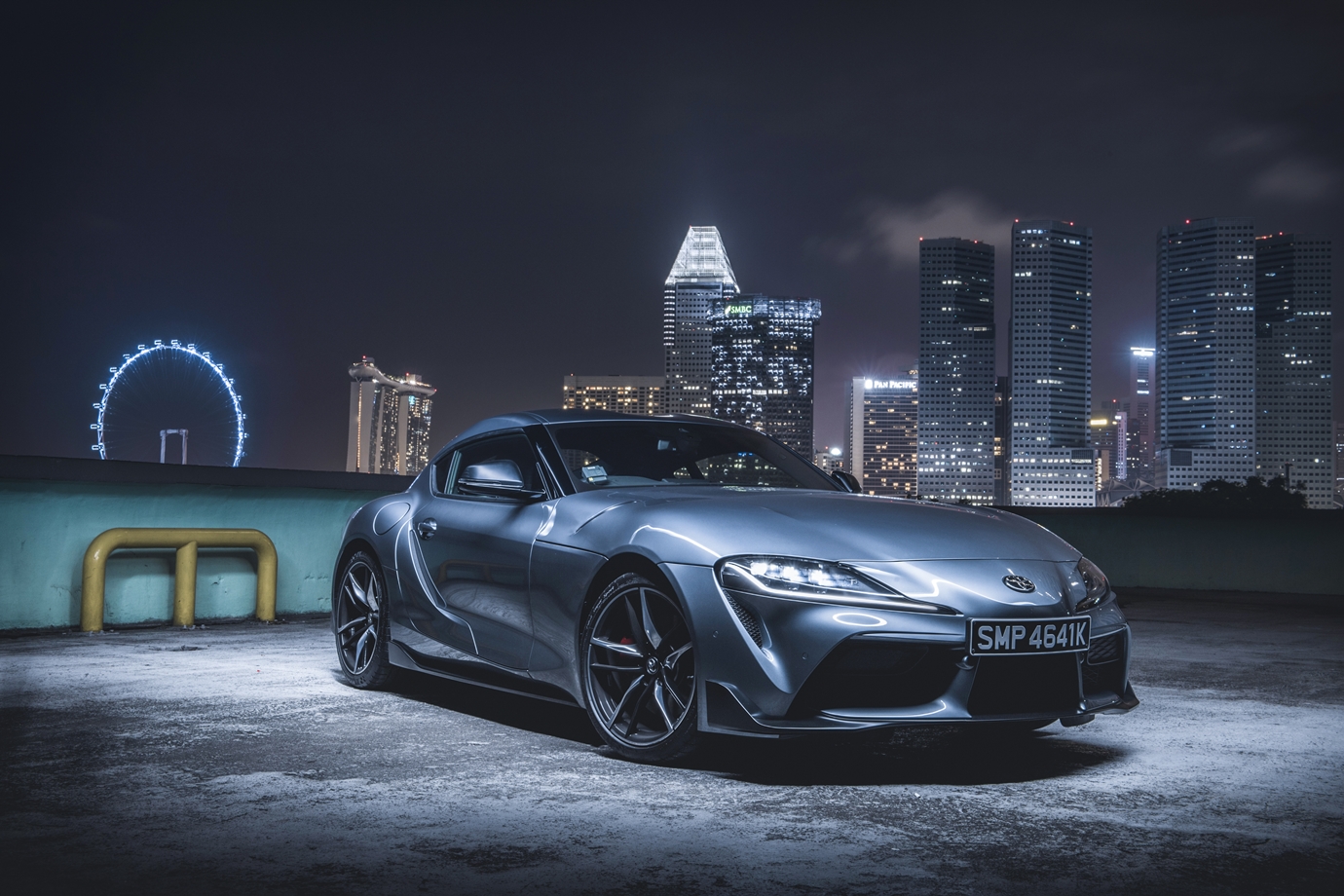 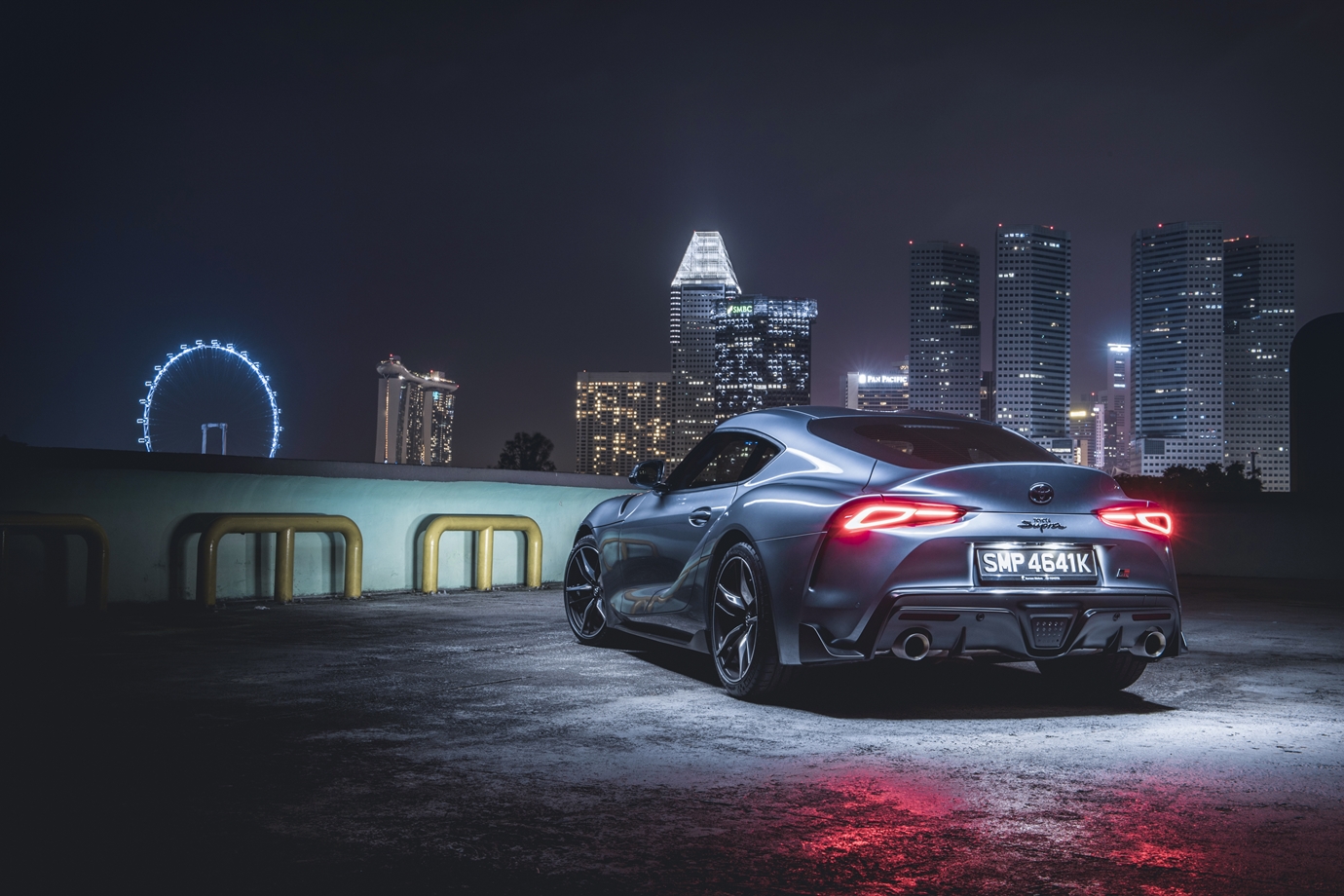 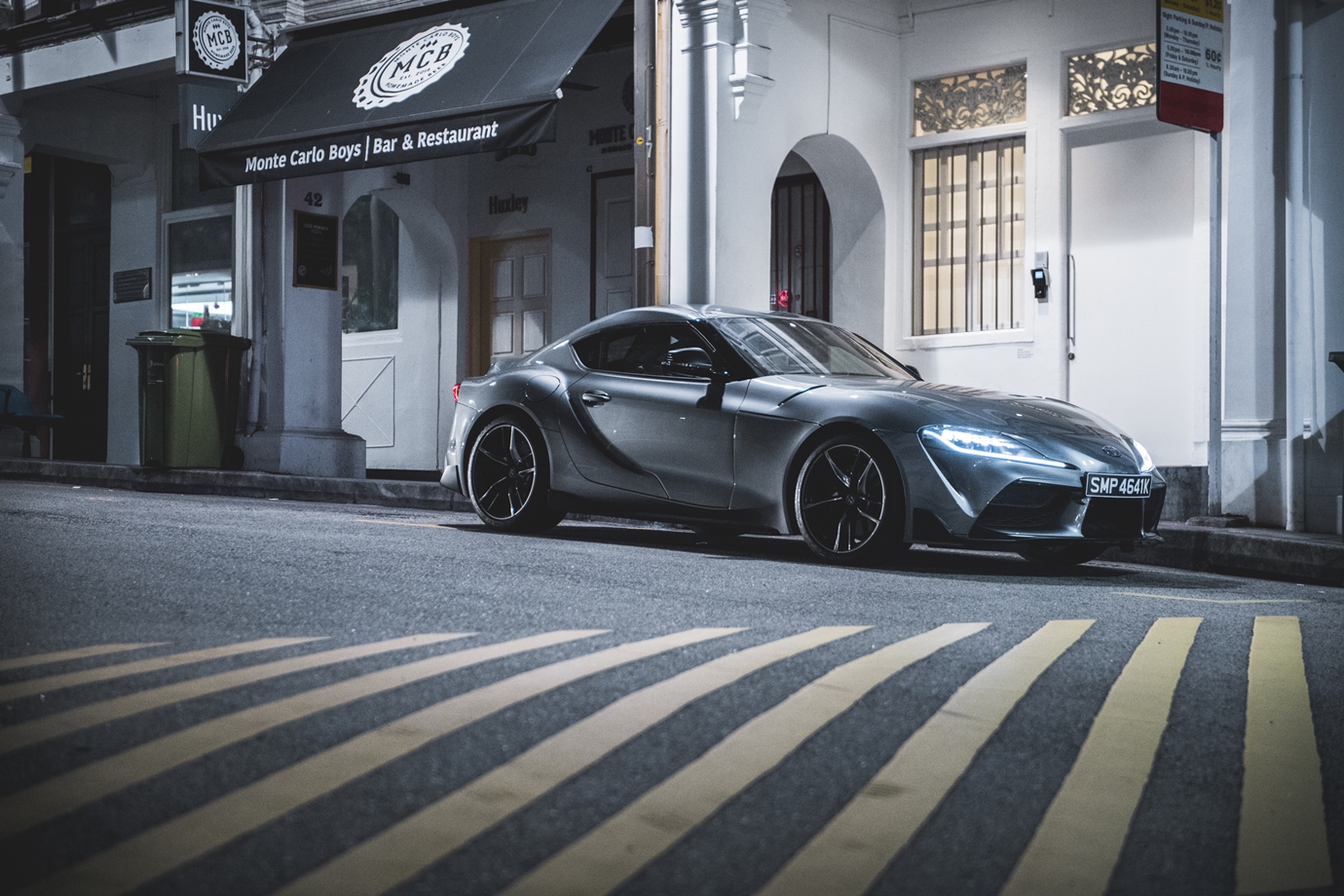 The Toyota Supra – or to use its full name, the Toyota Gazoo Racing Supra 3.0 – was one of the most anticipated, yet controversial cars to drop in Singapore in 2019.

Unfortunately, nay-saying critics couldn’t see the forest for the trees and bemoaned the fact that powertrain, chassis and some switchgear are shared with the BMW Z4 M40i roadster, which incidentally is also part of our Cars of 2019 round-up.

So did we make a mistake? We think not. If anything, petrolheads around the world would be a lot poorer had BMW and Toyota not worked together on the common sportscar platform. Besides, this isn’t Toyota’s first time collaborating with another brand to produce a sportscar either, as it joined forces with Subaru for the GT86/BRZ.

If you were to take the anecdotes at face value, there’s a possibility neither Toyota nor BMW could have justified a sportscar project individually. In a nutshell, there’s no point getting salty about it, because the world now has both a rear-drive six-cylinder coupe and a soft-top roadster to show for it. 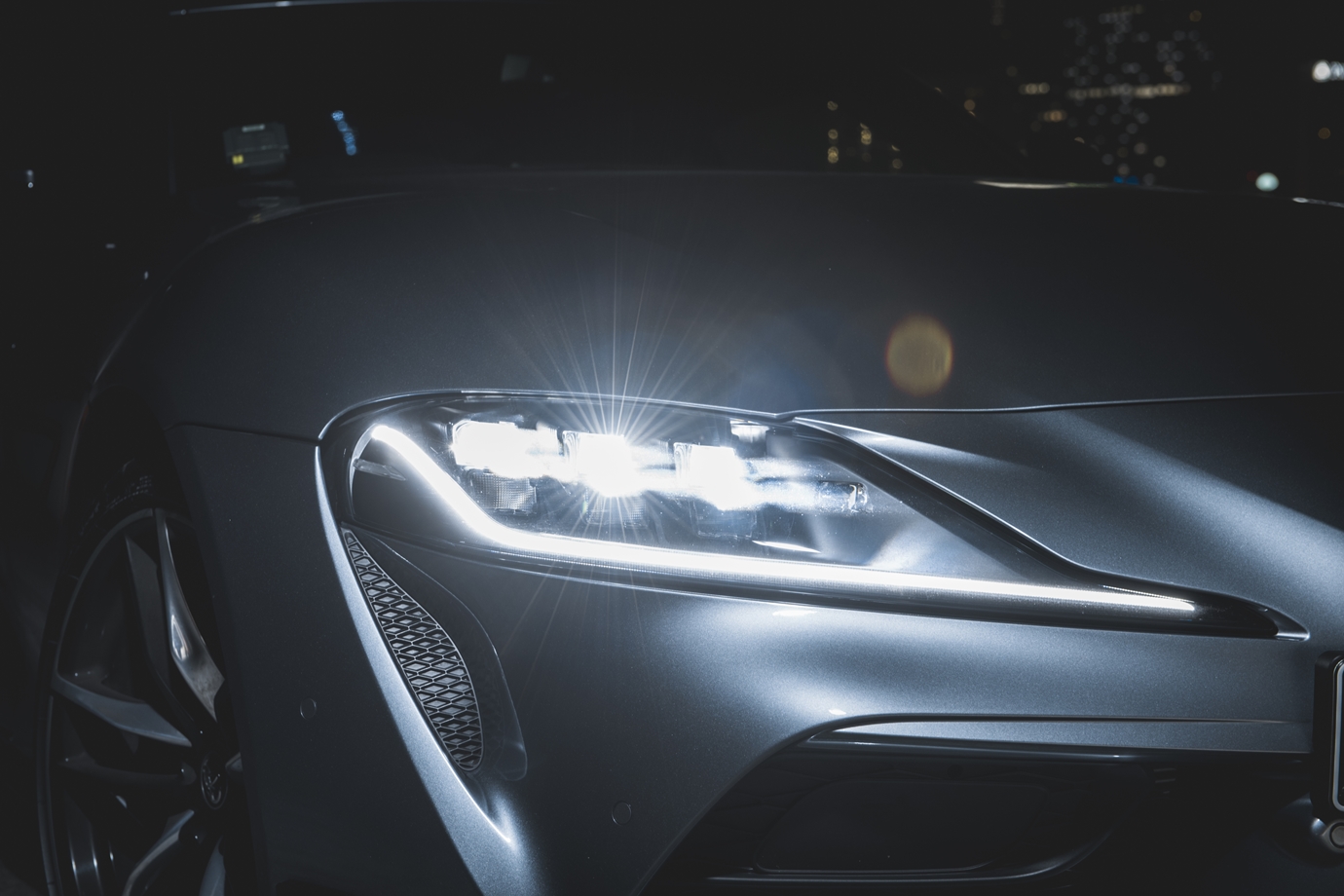 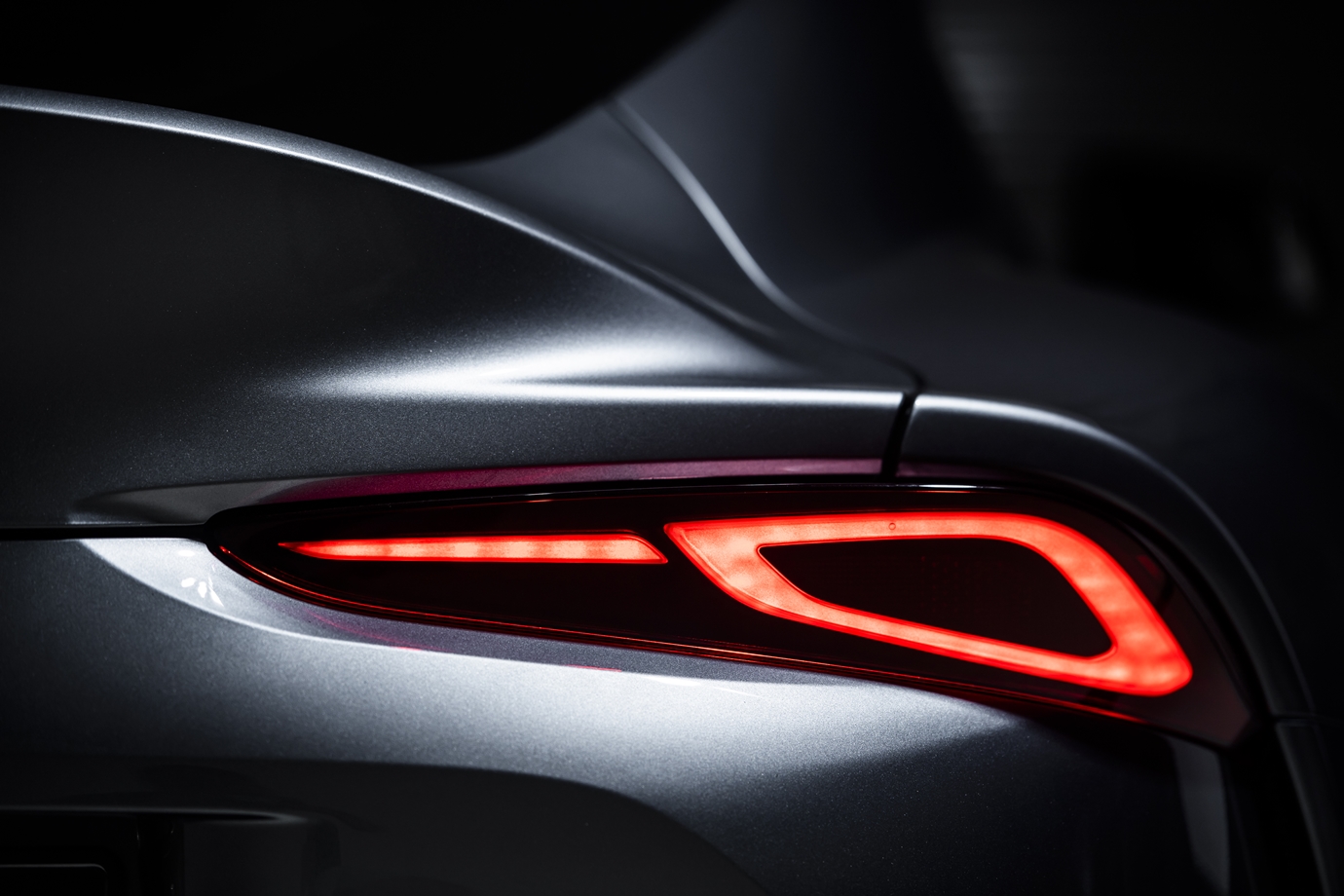 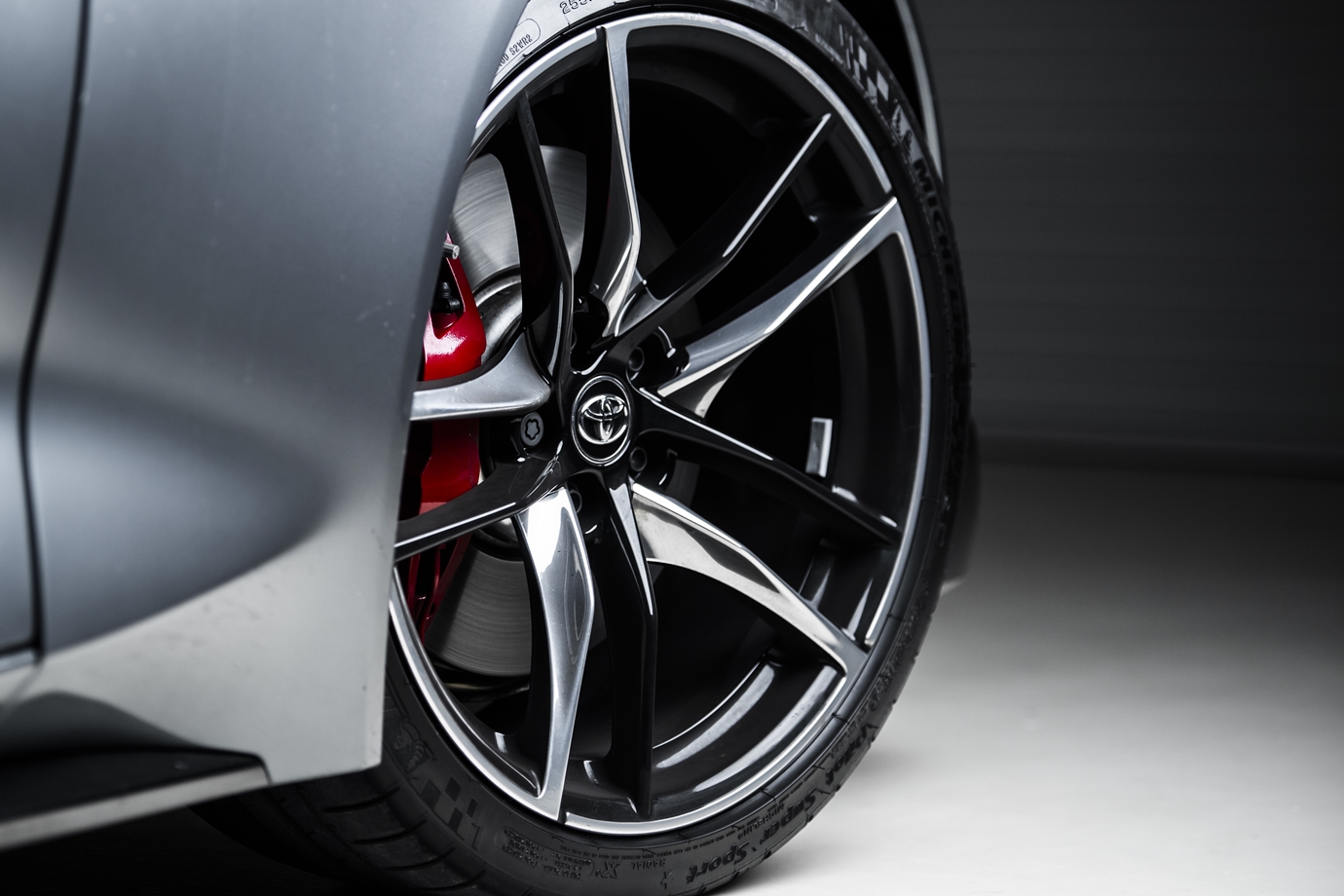 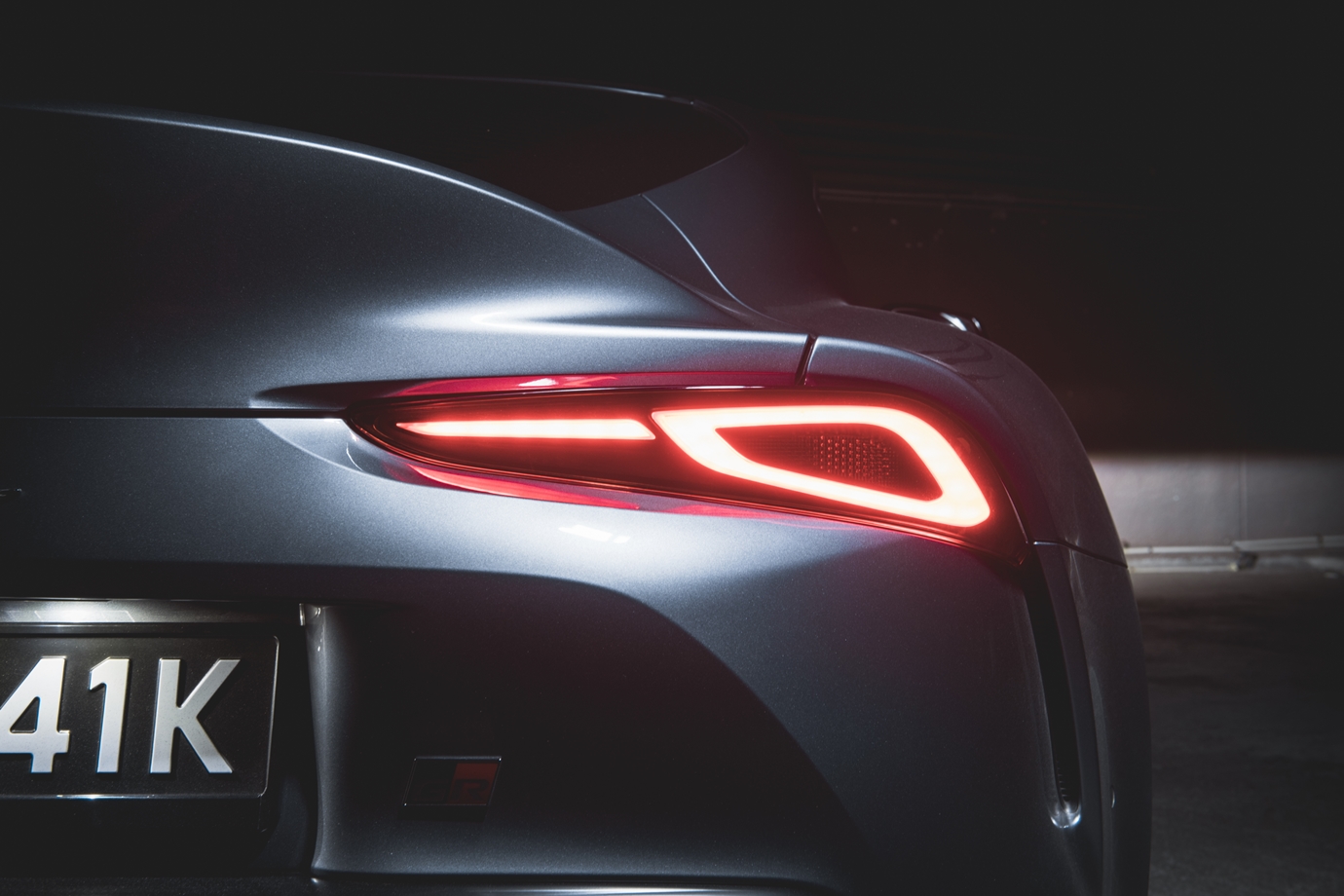 Buyers in such a niche segment don’t need to compromise and ‘settle’ for anything less than what they want, so if you’re looking for a coupe, there’s the Supra and if it’s a roadster you’re after, you’ll look towards the Z4.

We still can’t quite see what the confusion is, but then again, this could be the same sort of people that can’t rationalise the purpose of a Portofino versus a Roma.

Moreover, we don’t understand the big hullabaloo in such cross pollination, as pundits go on about it like it’s the end of the world. Given the niche nature of sportscars (especially in the broader context of volume brands like Toyota and BMW), many brands share resources by either buying engine/transmission or co-developing like BMW and Toyota.

Sure, there’s some pride to being 100 per cent ‘in-house’, but what happens when you start to flounder? You either get an urgent cash injection like AMG-engined Aston Martin, or get bought over by somebody else.

Like Bentley, Jaguar and Land Rover, Lotus isn’t even British-owned any more, with the Elise, Exige and Evoras powered by a plethora of Toyota engines sourced from the Corolla to the Camry, NTTAWWT of course. So back to the topic of BMW and Toyota getting together: there’s no better brand than BMW that Toyota could have chosen to work with in creating an inline6-engined, rear-drive coupe, two traits that have defined both the BMW brand and the Supra since forever.

The Supra boasts classic coupe proportions, and the lines of the low-slung coupe are butch, bold and beautiful, with a powerful musclature to the car that doesn’t fall into OTT territory. The 255hp turbo’d 4cyl 2.0-litre Supra may feel more nimble on the winding roads, but we reckon the complete Supra experience is best enjoyed in the full-fat 3.0-litre six-cylinder form we have here.

It’s not often that a major manufacturer condones aftermarket tweaks, but Toyota recognises the importance of third party tuners in perpetuating the Supra legacy – learned after the previous A80 generation – so you don’t have to worry about tweaking its nose in your quest for better handling or more power.

We’ve already seen body-kitted and more powerful variants of the latest A90, and to Toyota’s credit, it’s engineered the Supra to take mods into account. The blocked-up louvres and vents can be opened-up when extra aero and cooling are required. Even the lightweight, resin-constructed ‘lift-back’ boot is specially reinforced to cope with the additional downforce that comes with a big GT wing. 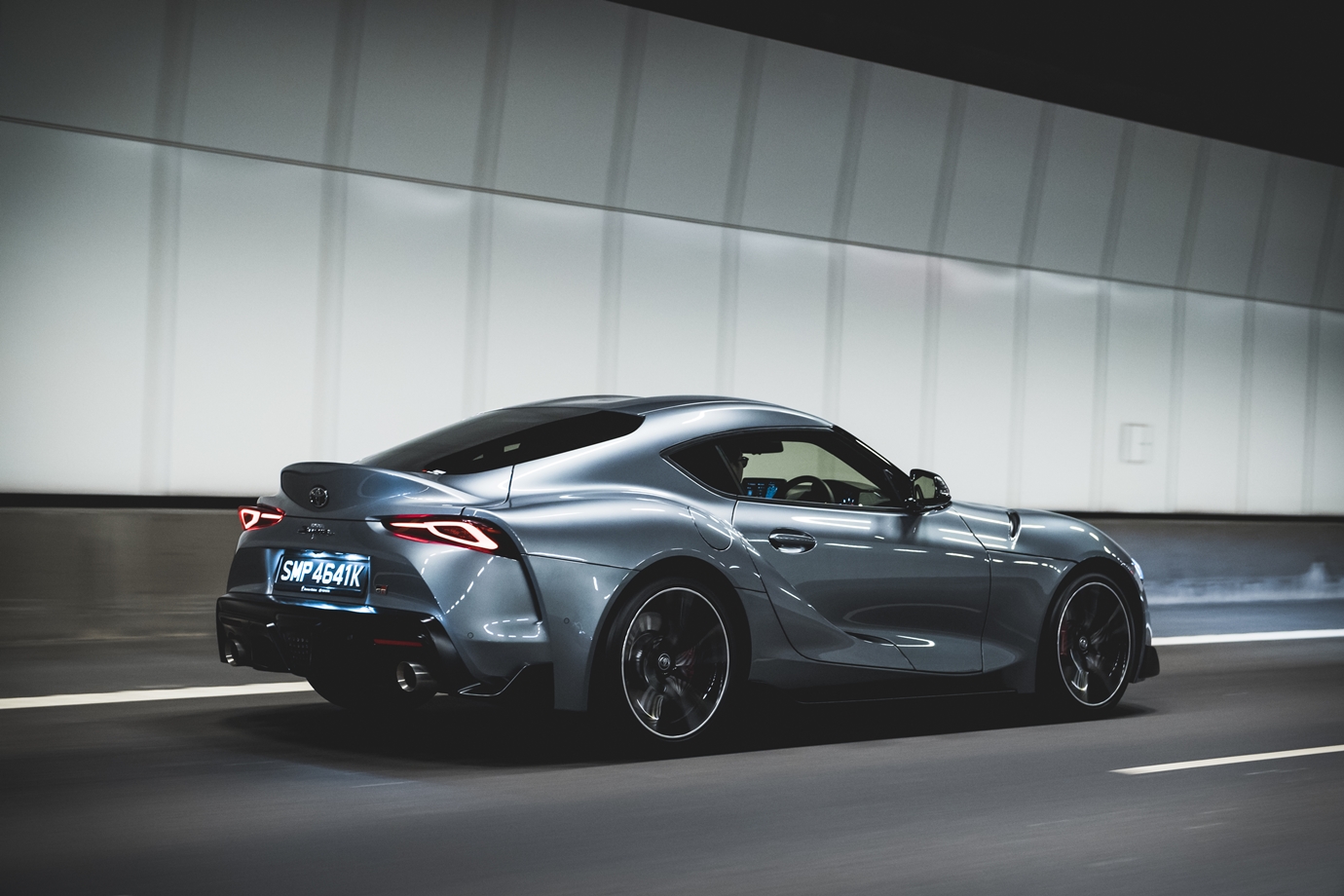 The legendary ‘Supra’ emblem sits just below the ‘ducktail’ gurney on the pert rump, with a discreet ‘GR’ (for Gazoo Racing) badge on the rear bumper. What’s Gazoo Racing?

There’s an interesting back-story to what started out as Akio Toyoda’s skunkworks racing division, but suffice to say, it is used today in the names of Toyota’s performance cars. The first GR model is the A90 Supra, and the next to arrive will likely be the 272hp GR Yaris hot-hatchback. 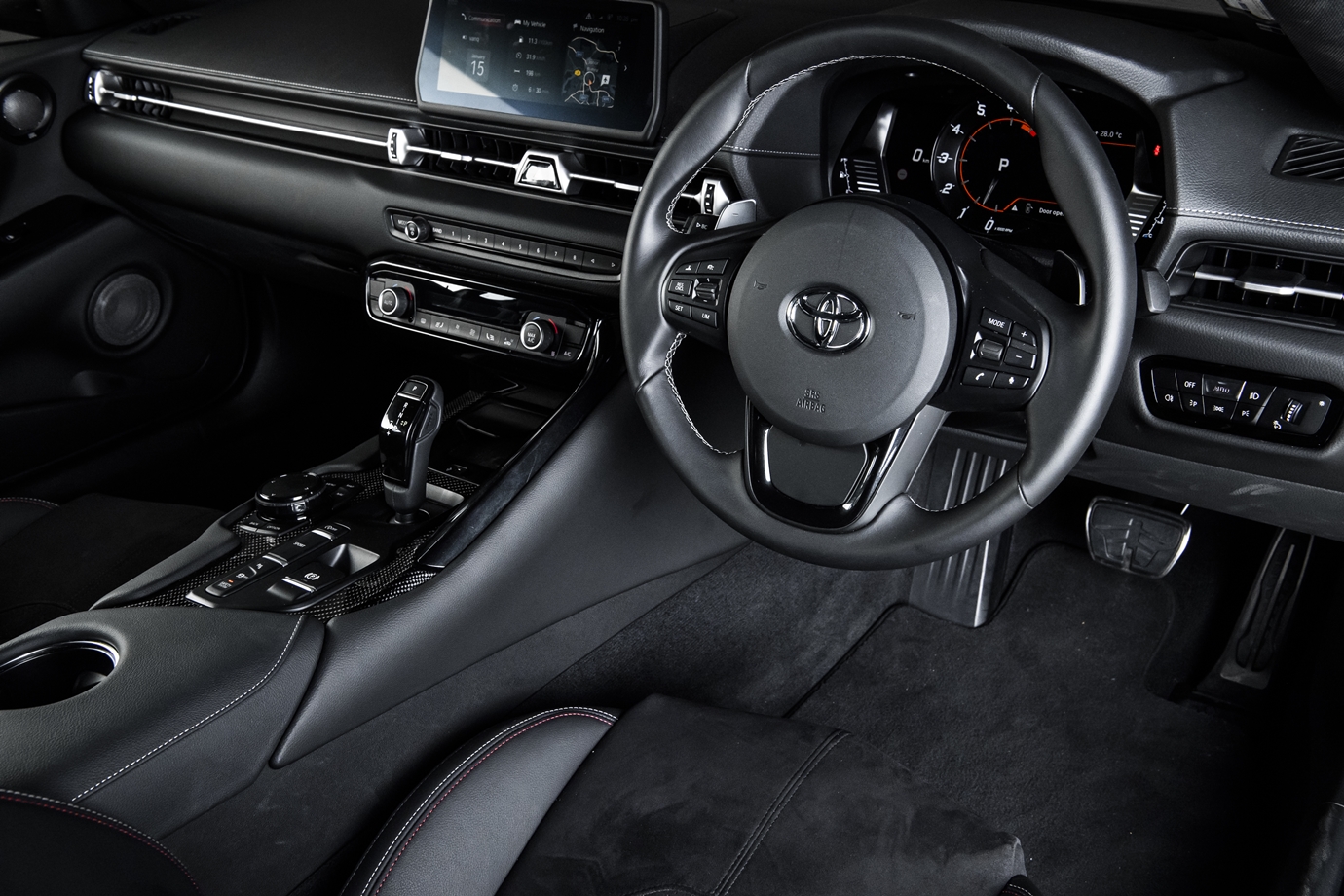 There’s a familiar air to the ergonomics of the Supra’s cockpit, but it doesn’t breed contempt in those who know what the car is capable of.

Also, Toyota has added enough carbonfibre highlights in the all-black leather/Alcantara (there’s a racier red-black option) cabin to make it its own. The driver sits low and deep in the car for an engaging drive when the fast gets going, and you receive ample communication through steering wheel and seat-of-pants.

The A90 ditches the +2 rear seats of the last generation A80, but it’s still practical because of the thoughtful through-load design, which means golfers can rest-easy in the knowledge a golf-bag will fit lengthwise.

There’s plenty of thrust thanks to the turbo’d 3.0-litre’s 340hp and more importantly, 500Nm of torque. The 0-100km/h blitz takes just 4.3secs, but straight-line performance isn’t the point of the car – nor are top speed runs, for that matter. Instead there’s a playful nature to the car’s dynamics that lets you frolic with the traction circle. We’d have preferred a louder exhaust soundtrack to go with the drive, but we reckon it won’t be long before there are more options to choose from.

The A90 Supra may not be as hardcore as some may like (neither was the cult A80 as stock if you recall), or a manual (that may be on its way!), but dig deep beneath its skin and you’ll realise it’s a fine continuation of the Supra name. What’s remarkable is how potent the Supra is out-of-the-box, especially when you recall the stock A80 without the rose-tinted glasses, which we found needed to be tweaked to at least 450hp before things got really fun. With pedal-to-metal, the A90’s 8spd auto’s shifts are closely-spaced, crisp and authoritative, with snappy responses to the driver’s paddle-shifts.

We can’t think of many (if any) new compact sports coupe in the circ. S$265k retail price the Supra operates in that offers a six-cylinder and engaging rear-drive dynamics. It blows a lot of contenders out of the water with its compelling blend of grand touring comfort and punchy performance all wrapped within the ‘pretty fly’ package of the Supra.