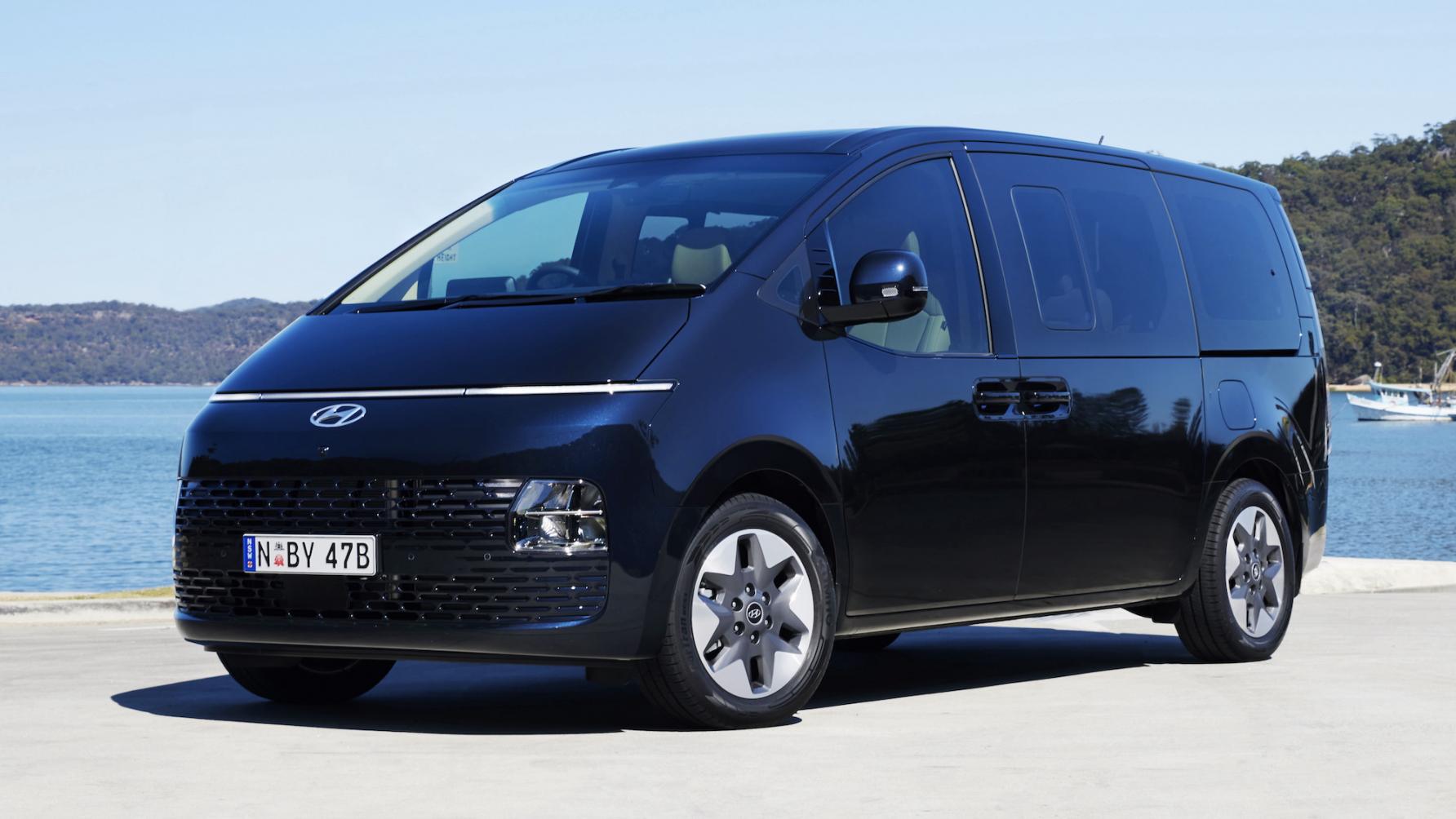 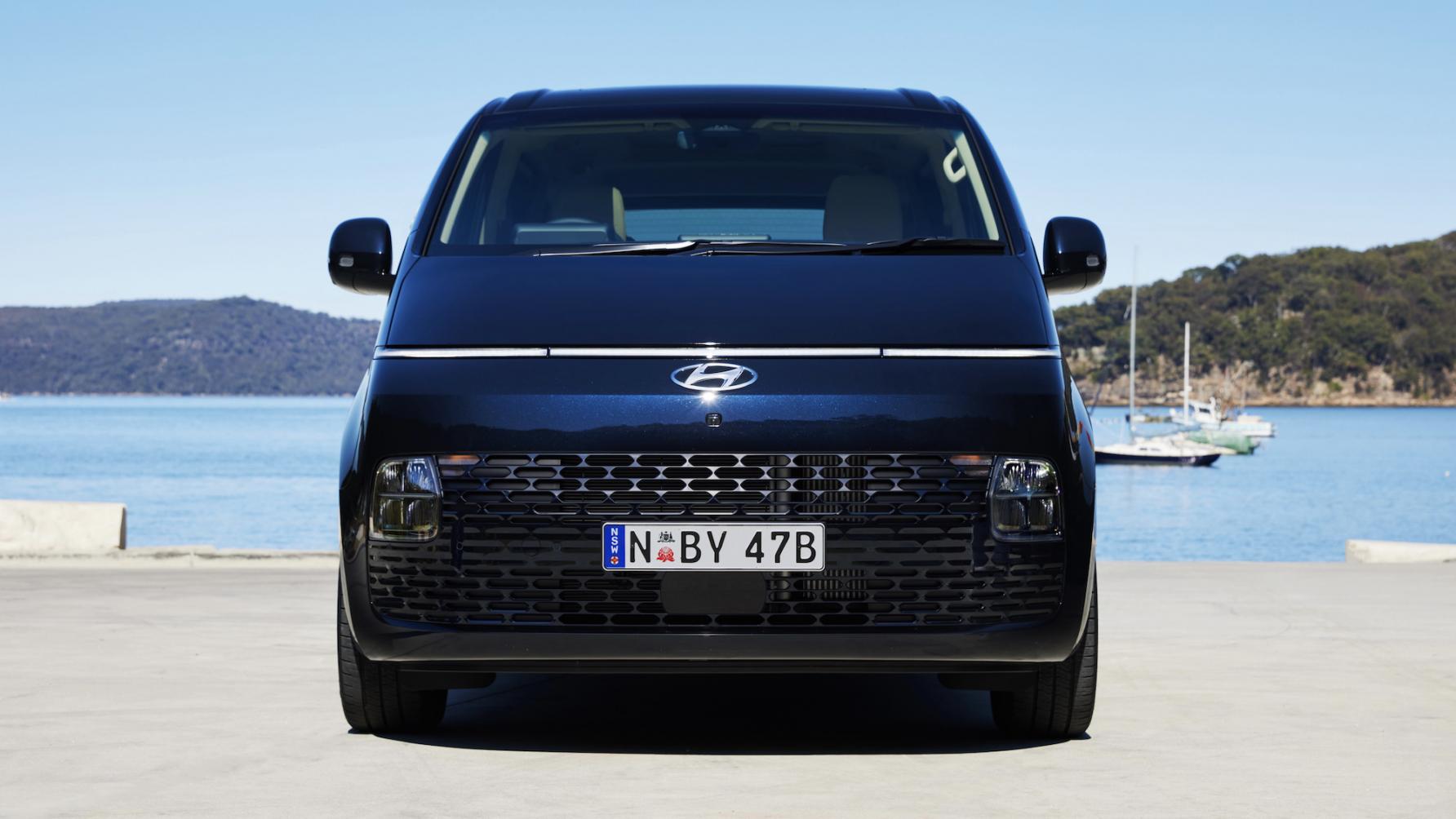 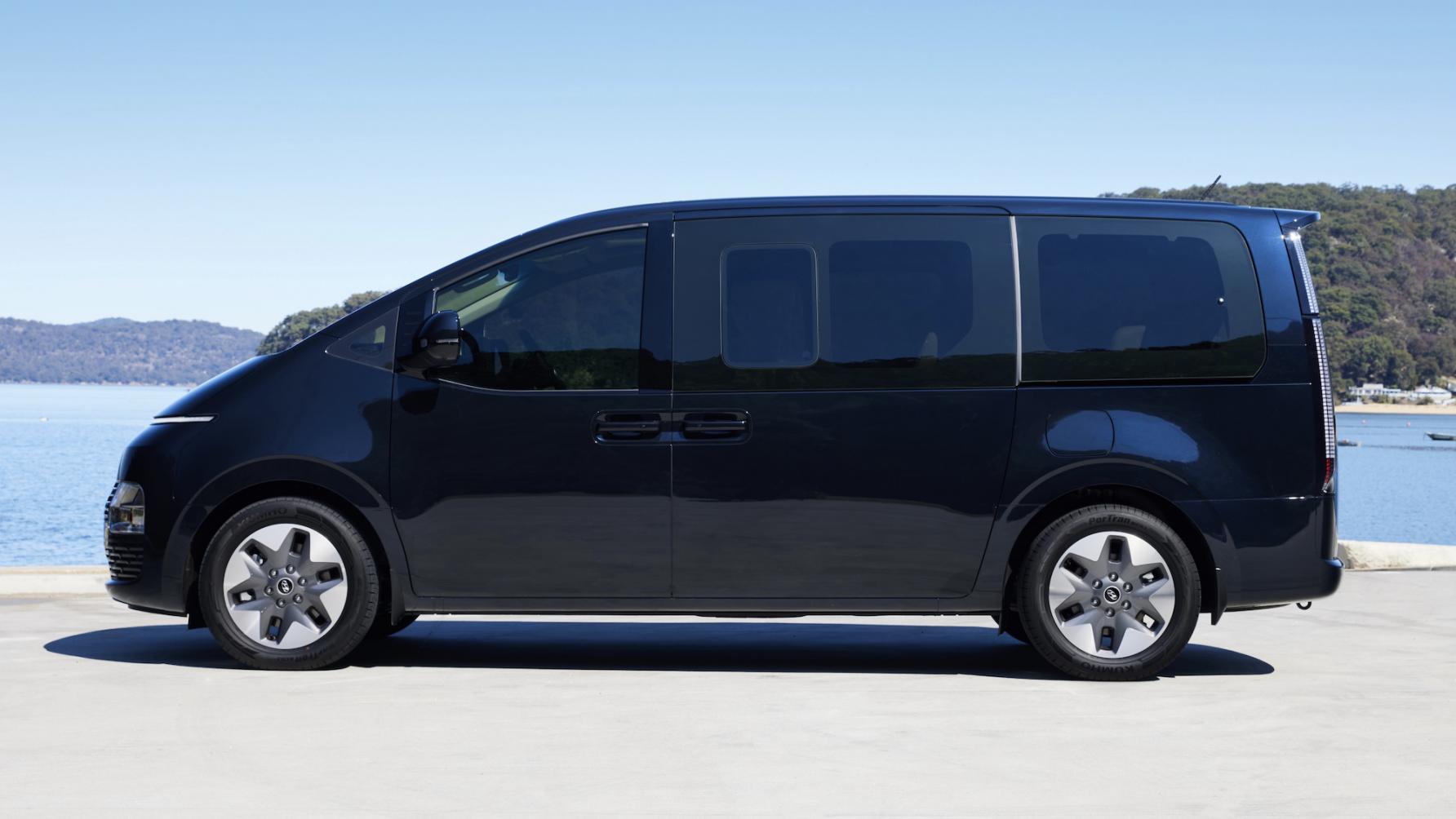 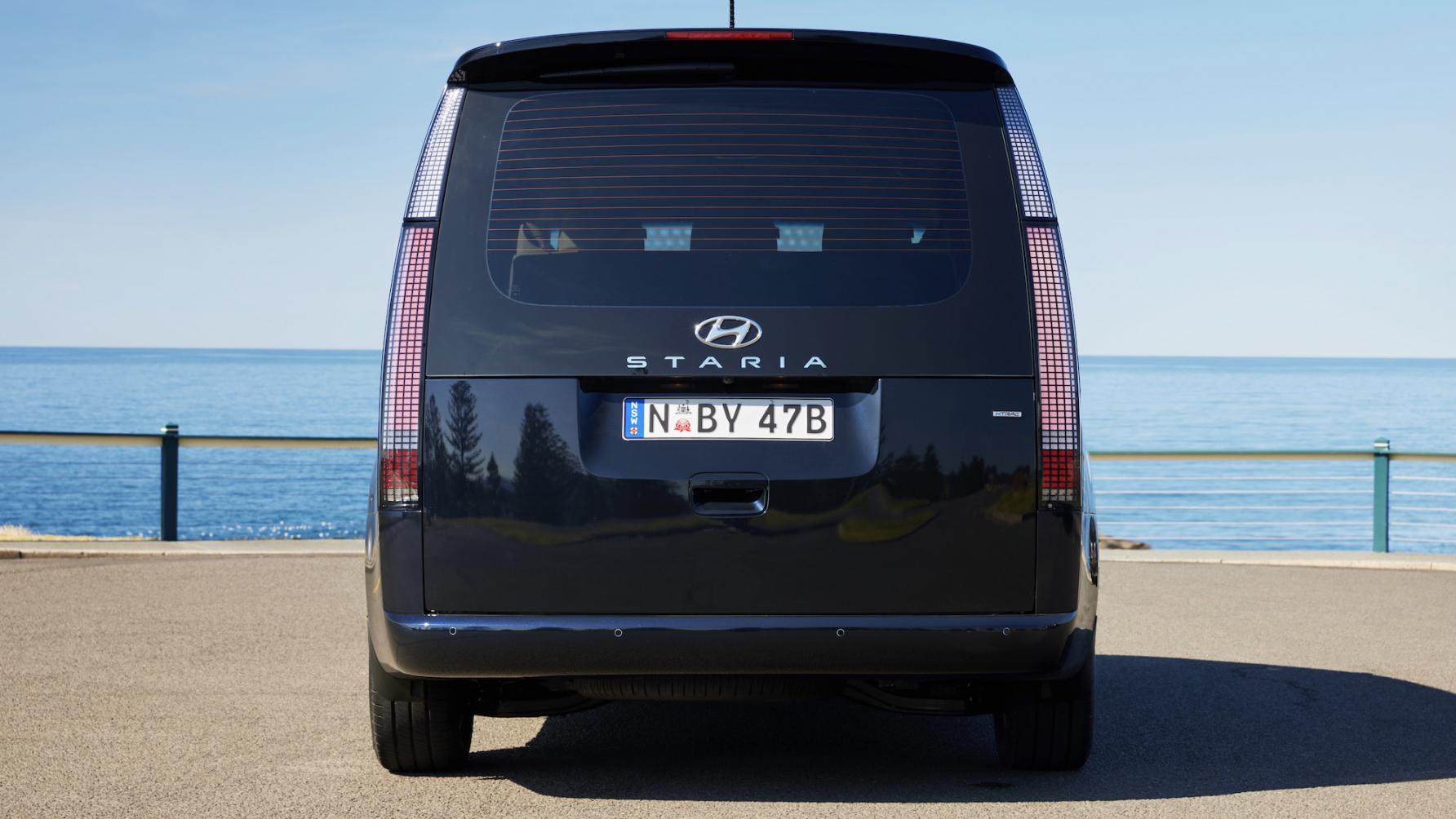 Indeed it is, and it’s worth taking a moment to appreciate its design. So often, people imagine practicality and aesthetics sit at opposite ends of a spectrum. They really don’t, as much as phrases like ‘style over substance’ and ‘concessions to practicality’ would have you believe otherwise. But codifying complex issues into simple points on a single line is something of an unavoidable human trait – left-wing and right-wing, anyone?

OK, we get it. Can we talk about the van for a bit, please?

Absolutely. It is a van, and it has many chairs in it. Presumably, it’s your job to find a way to fill all eight of them. And how you do that is precisely none of our business.

Um, maybe a bit more than that? Or even a lot more?

Right you are then. This is the Staria, Hyundai’s replacement for the superannuated iLoad, iMax, i800, iCan’tBelieveAppleDidn’tSue or whatever it was called in your particular neck of the woods. It’s front-drive by default, as opposed to the rear-drive iVan Drago, but diesel versions come with HTRAC all-wheel drive. 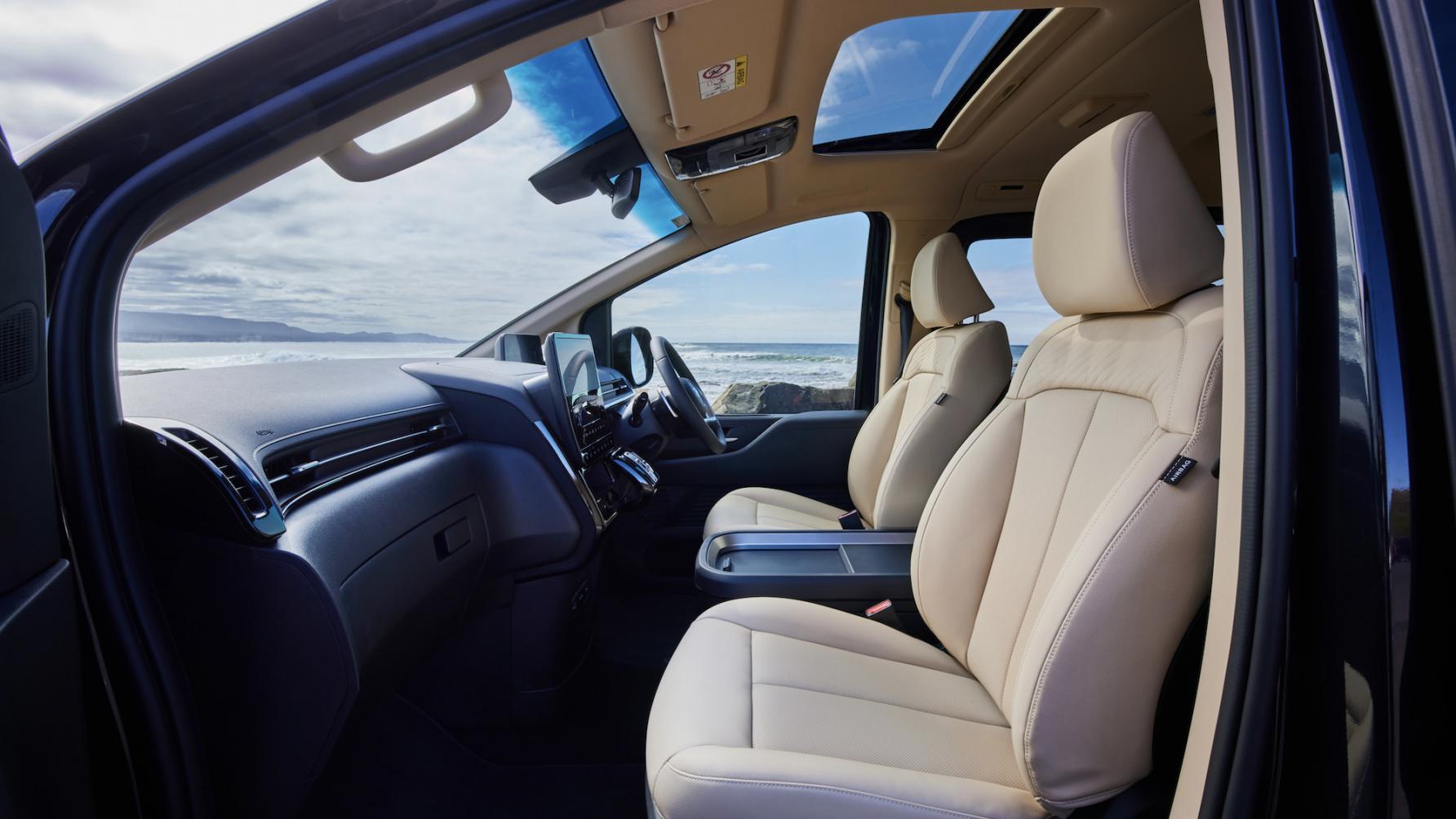 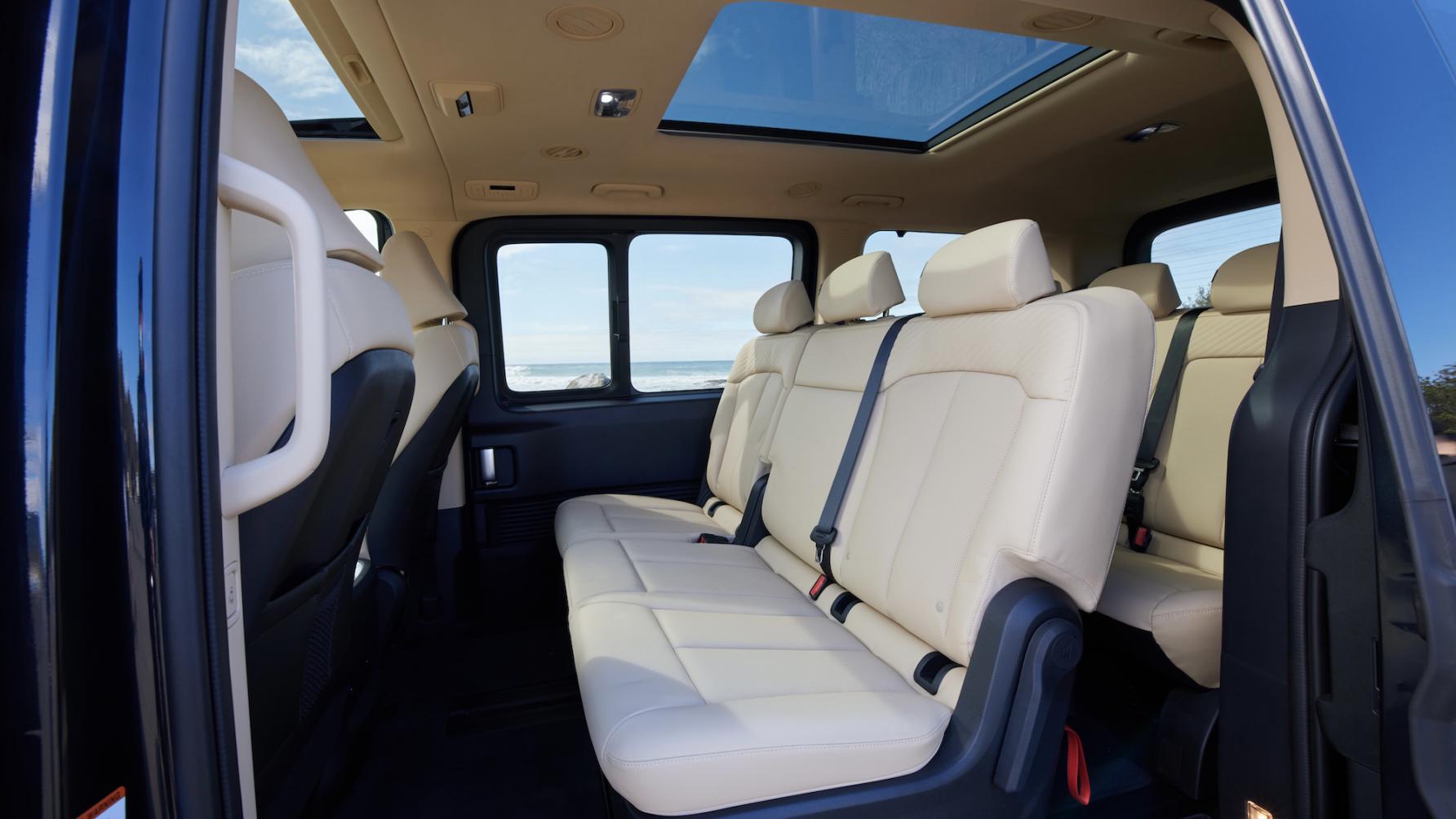 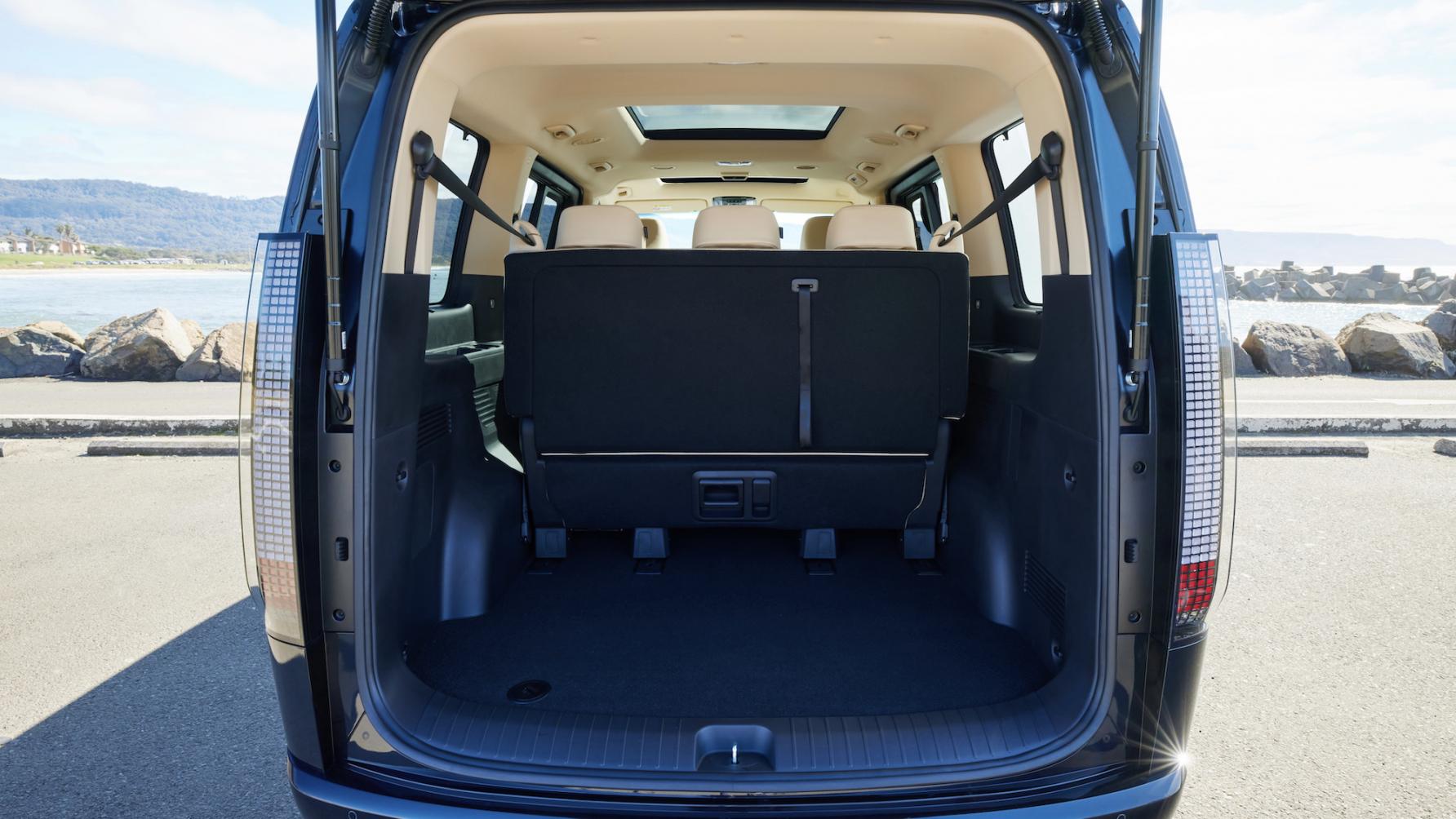 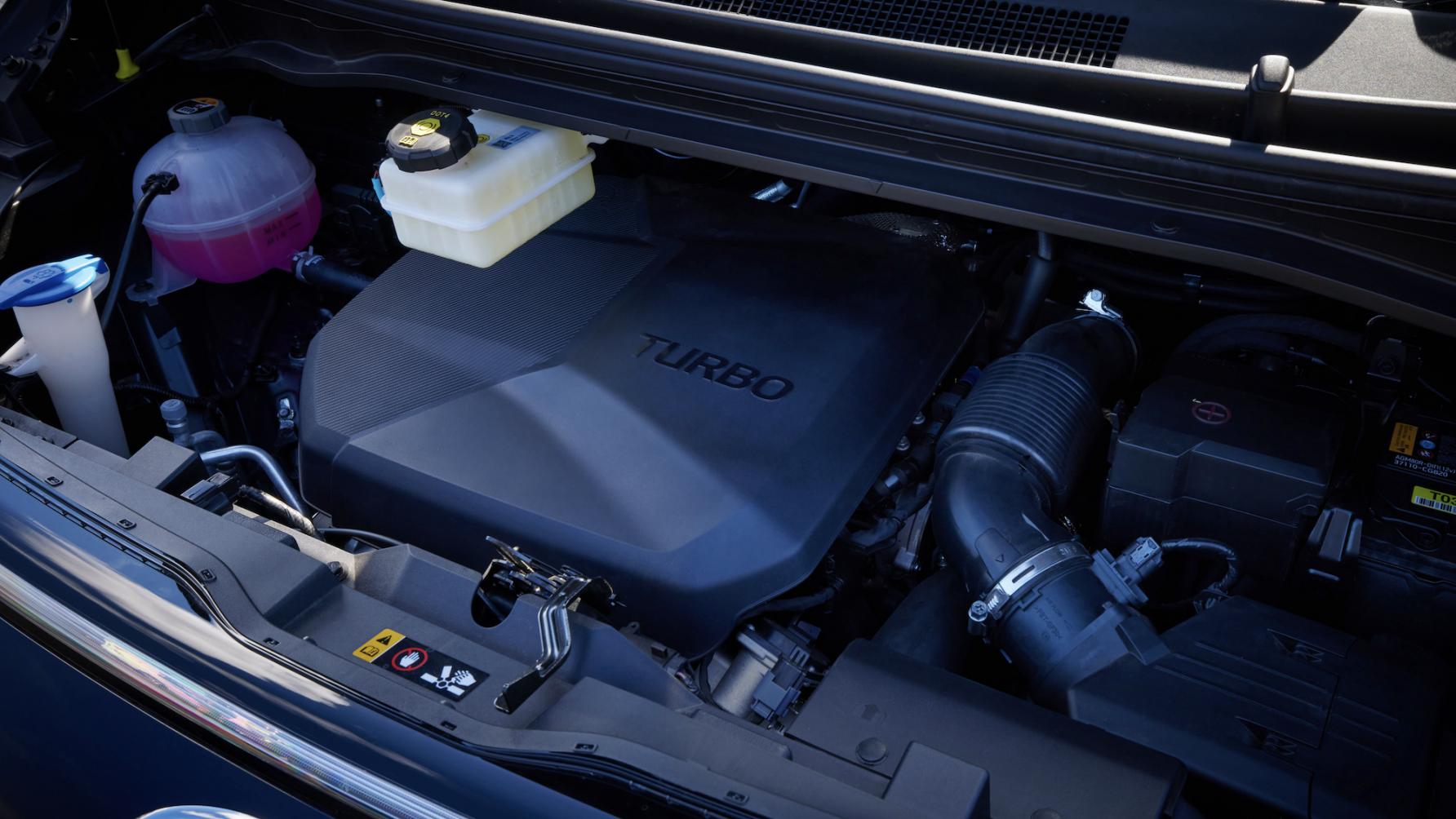 HTRAC is Hyundai’s name (Hyundai + TRACtion) for its AWD system, which can vary how much torque goes to each axle in different modes or under various weather conditions. If it comes to it, you can push a button to lock in a 50-50 torque split at low speed, and computer-controlled braking does an approximation of left/right torque vectoring.

Because Australia’s in the middle of La Niña – a weather system that dumps serious amounts of rain – it’s been consistently wet on the roads. Even so, the all-wheel-drive Staria didn’t come unstuck at any point, regardless of how much it was provoked. That’s down to modern tyres and modern stability control in a big way, but there’s noticeable support from the extra grip and wheel braking.

The steering is light, as it should be, and also slow. It makes sense, given a quick steering ratio on a high-riding, two-tonne van is the best recipe for a rollover so quick it’d shame a prize-winning Border Collie. But it also does a wonderful job of reminding you that you’re driving a van.

And when we say ‘high-riding’, it’s not some throwaway term, either. It really is a marvel to look down on SUV and 4x4 drivers in traffic – not metaphorically, but very literally. The driver of a modded 80 Series Land Cruiser was properly bemused to find himself looking up at the imperious driving position on offer in the Staria.

This height does have an unintended effect, however. You know how when you drive something low to the ground, it feels like it’s going faster than it really is? Well, imagine the absolute opposite of that and you’re somewhere near the experience in a Staria. Seventy miles per hour feels like half that. So, if you’re the impatient sort (we can relate), you may find the perceived lack of progress to make trips feel slower than they are.

Hang on a minute – high-riding, all-wheel drive... is it a modern Mitsubishi Delica?

This is the big question. And the answer is... not so much. The platform that underpins the Staria is broadly the same as the one underneath the Kia Carnival, and that’s before Hyundai extended it by more than 50cm. The wheelbase is just shy of 3.3 metres – more than a long wheelbase Range Rover. 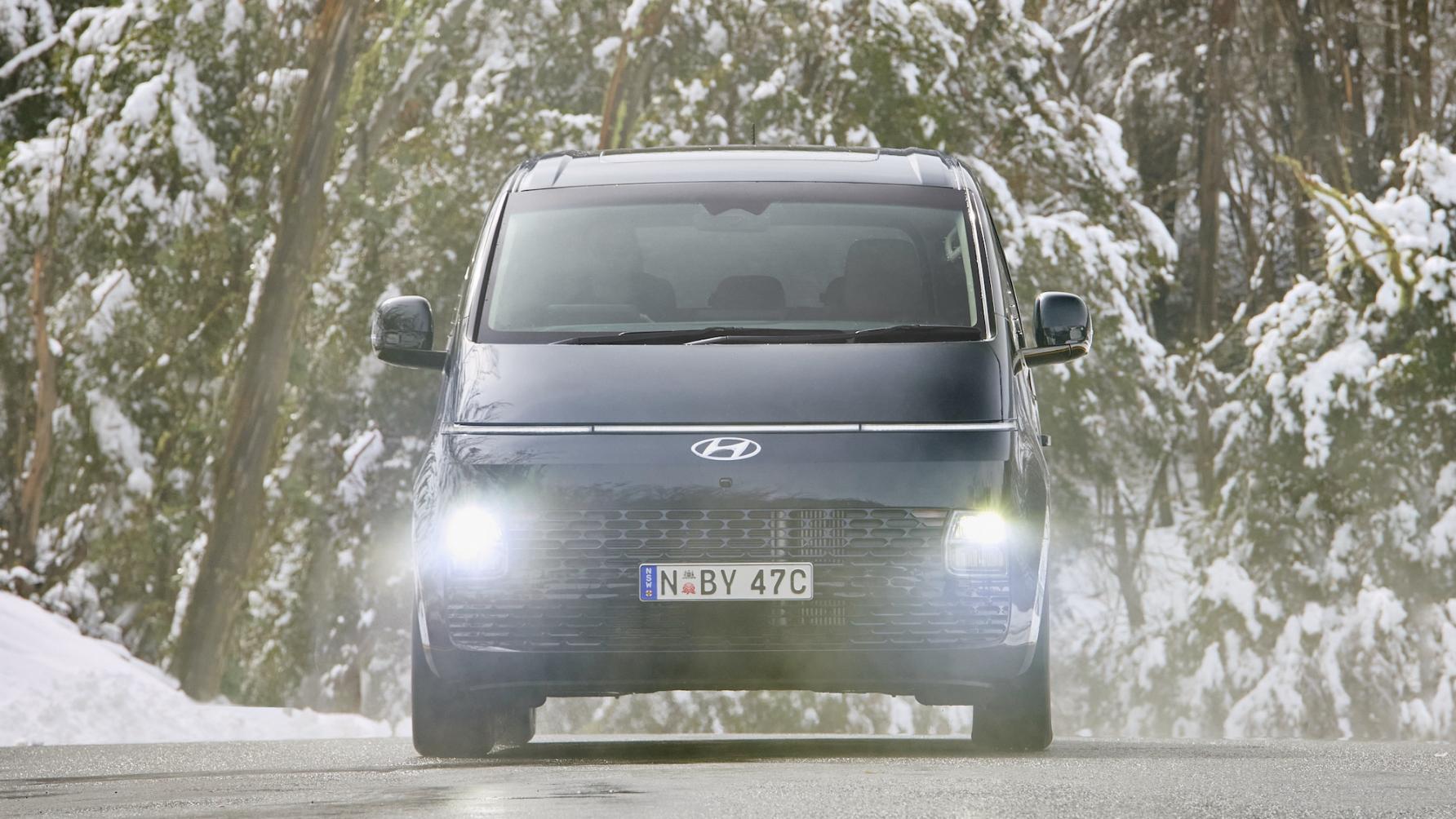 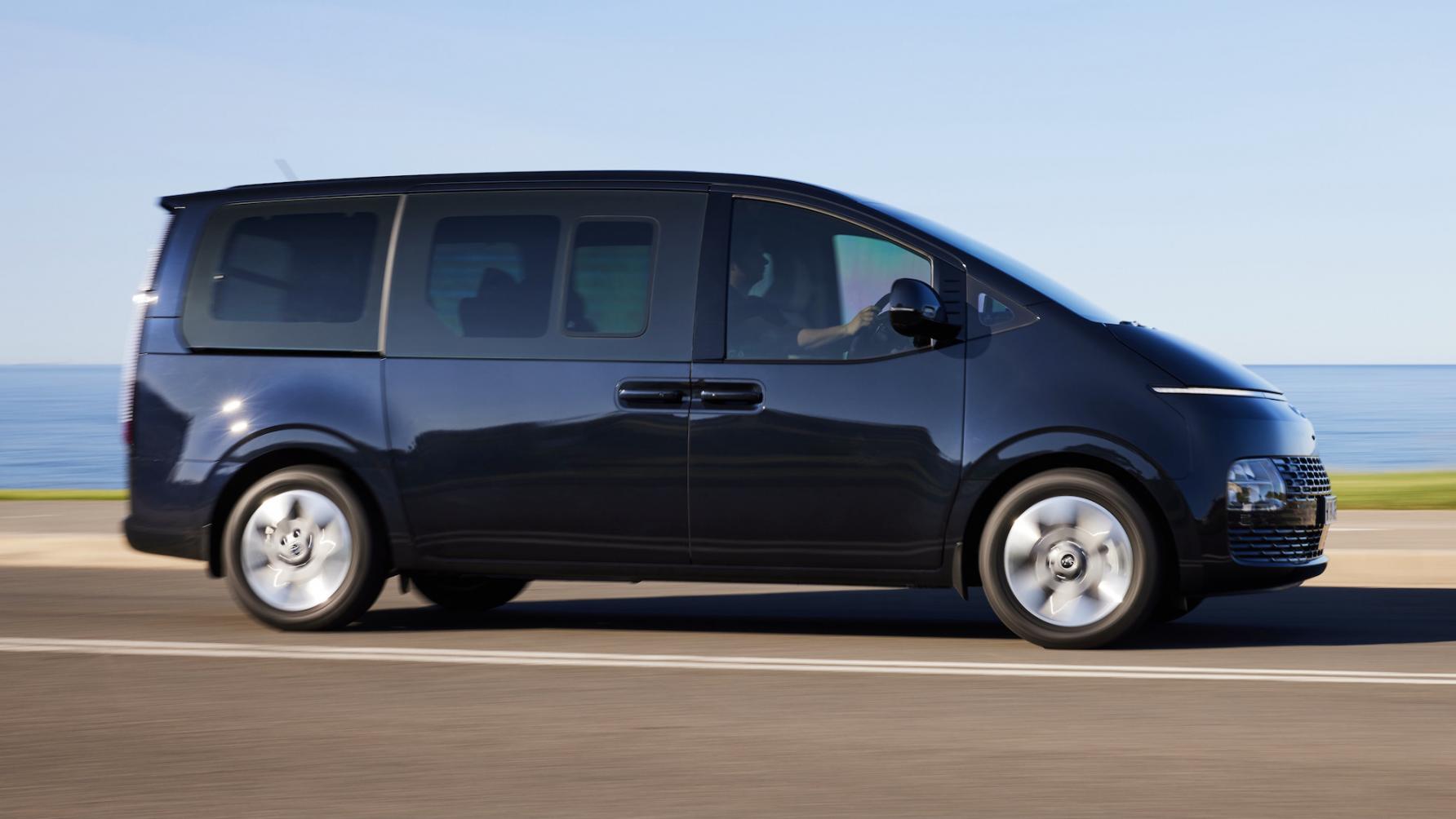 Just take a look at the Staria in profile and imagine the kind of breakover angle you’re going to get. Or don’t – Hyundai lists it, and it’s 14.9 degrees. For comparison, the Range Rover LWB we mentioned earlier has 25 or so degrees, and the Suzuki Jimny has 28. Approach and departure angles are similarly scrape-worthy compared to proper off-roaders.

If that’s all hieroglyphs to you, the crux is that the Staria’s not really meant for tackling trails. There’s as much ground clearance as a Nissan Qashqai and similar off-road prowess. A Subaru Forester would likely leave it in the dust. Or mud. Or snow.

But if you’re looking to trek along in all weathers, along any type of road surface, with a genuine abundance of interior space, the Staria is a proper contender. Especially if all-wheel-drive Multivans and V-Classes aren’t available in your neck of the woods.

What if I were a practically minded sort of person?

Then you’ll be absolutely delighted by the Staria. Or whatever practical people feel when things go their way. Quiet approval?

There’s seating – and room – for an entire rugby sevens team and their coach, with space left over for their luggage. The centre console between the driver and front passenger is about the size of a bar fridge, with the kind of storage you’d have to get creative to fill and a sliding top in case you need a table. For card games, perhaps? Or chopping something up?

Moving on. There are so many cup holders, you could do that hipster deconstructed latte thing without pinching anyone else’s drinks pocket. Storage bins and pockets abound, as do phone charging ports and a 12V system rated to 180 watts. You could run a gaming laptop from it and still not trouble a single fuse. The rubberised phone pocket is big enough for modern multi-camera behemoths and hides a Qi wireless charger underneath.

Space has been called the final frontier and the ultimate luxury, and we’d tend to agree on both counts. But even if you don’t, you’d have to concede that space is the ultimate practicality – there's enough room to consider a Staria for anything from family hauling to full-on #vanlife. We'd go for the commercial version with all-wheel-drive, put on some chunkier tyres and use it to take dirtbikes to trailheads. Your choice, mileage and power move may vary.

Are there any gadgets as space-age as the looks?

There is a 360-degree camera system that does a little computer rendition of your Staria in its environment. So you can get a perfect view of everything around you. Handy, when you’re in something the size of a London flat. There’s also a camera mounted in the ceiling that looks over the six seats in the rear, so you can see exactly which sibling started the fight after all.

There’s another camera trick in the up-spec versions, too – when you put the indicator on, the left or right dial on the digital dash will switch to a low-slung rear-view camera, perfectly placed to avoid a kerb while reverse parking or see something you’ve somehow missed in the massive mirror.

Then there’s the sort of stuff that Gene Kranz (or indeed Gene Roddenberry) would have marvelled at, but we seem to take for granted – like autonomous emergency braking, automatic lane following, cross-traffic warnings and driver-attention monitors. And we finally understand why it’s called the Staria – what else but spaceship tech can get you ad astra?

OK then, what’s bad about it?

The handling’s actually pretty decent, for what it is, thanks in no small part to properly set-up multilink rear suspension. But it’s that backhanded compliment in that phrase – ‘for what it is’ – that says all it needs to. It’s a van and you’ll need to drive it as such, taking its size and girth into account. In all-wheel-drive spec, your significant other will lose patience before the Staria loses traction, but there’s nothing to be gained from high jinks of that sort.

In terms of its hygge-free interior, it is rather hard to feel cosy when you’re surrounded by glass. Anyone who works in a modern office with floor-to-ceiling windows will get the idea. With that said, the front seats could be more enveloping, some hard plastics could do with a rethink and the whole thing feels primed for a once-over by someone Swedish.

These things betray the dual purposes of the Staria – as an MPV and commercial van. As does the slow steering, which does lend itself to doing that wax-on, wax-off palm twirling to steer. Oh, and you’ll be turning off the lane-keep assistance every time you drive, as it seems to be permanently stuck in the ‘Helen Lovejoy’ setting. And that brings us to the biggest problem with electronic safety systems – they’re able to see, able to think and able to act, but they seem continually behind when it comes to the ability to infer.

Here’s a scenario for you. You see a bus coming the other way down a narrow road, so you move over to the left, into the shoulder. But that means crossing the white line, so the lane-keep assist will think it knows better and turn the steering wheel back towards the oncoming bus. This isn’t a hypothetical, by the way. And you’ll be glad / entirely uninterested to know that through the application of force and some of the shortest, sharpest words in the English language, everyone made it through without incident.

The other major downside comes as a result of its sheer size – it’s flipping massive. It’s so tall, in fact, that you start to wander into the danger zone usually reserved for jacked-up 4x4s and Kenny Loggins. Mr Loggins would call it ‘Metal under tension, begging you to touch and go', and most others would call it ‘scraping the roof in car parks because it’s so bleeding tall’. That’s the double-edged sword of huge interior space, high ceilings and seating for eight.

That’s... actually a laundry list of complaints. Any more bile to spew?

Yes, actually. The Staria also takes a hit right where it lives: practicality. There aren’t any ISOFIX mounting points in the third row, so, if you’re counting on Hyundai’s big bus as a family charabanc, you’d best space out your kids accordingly. And if you're planning the ‘MPV on weekdays, van on weekends’ thing, it's worth mentioning that the Staria doesn't offer the option to easily remove the second or even third-row seats.

As for the powertrain, the 2.2-litre diesel doesn’t labour, even under the 2.3-tonne weight of the Staria, but the godawful sound of an oil-burner under load (and at idle, to be honest) is enough to make you wish the Staria was battery-powered. Or at least pick the petrol V6.

But the biggest problem with the Staria is the same problem that you’d get from a Mercedes V-Class or Volkswagen Multivan. They feel like massive vans because they are massive vans. The Staria’s a good example of the van-based MPV – and has the best styling to boot – but it doesn’t cosset, it doesn’t compress motorway trips and it doesn’t corner like an estate.

Should you absolutely need the space or seating on offer in one of these van-based leviathans, then that’s your lot. If you’ve sown the wind (or indeed your oats), then prepare to reap the whirlwind. And buy a Staria, which will shield you from the worst of the storm.

If you can get away with something smaller, lower or not based on a delivery van, then do so. The practicality of all that space is tempting, and delivering it with that much styling panache only more so. It's a triumph of design and very practical in specific circumstances, but it takes a certain kind of person to want to drive it everywhere.