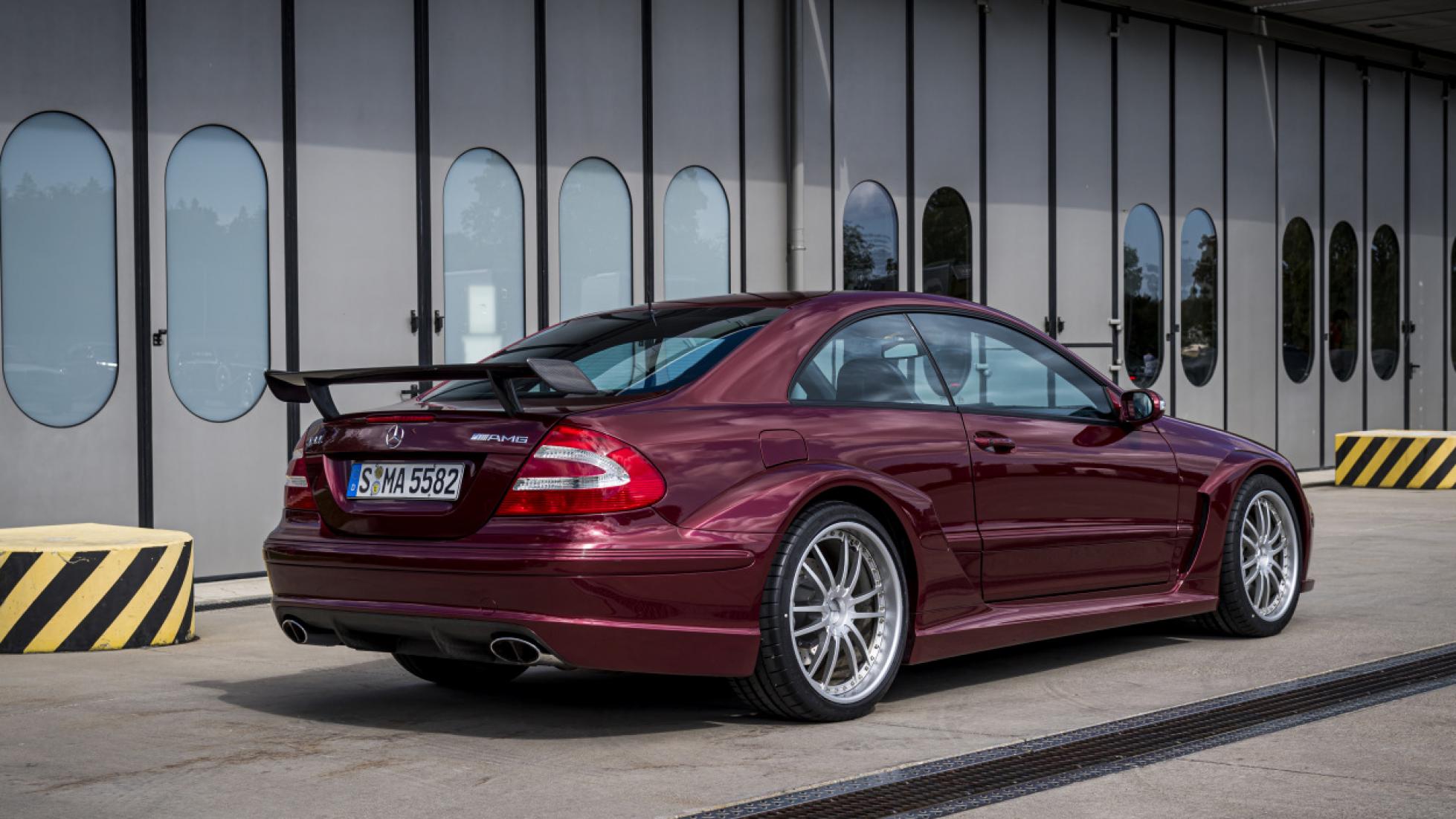 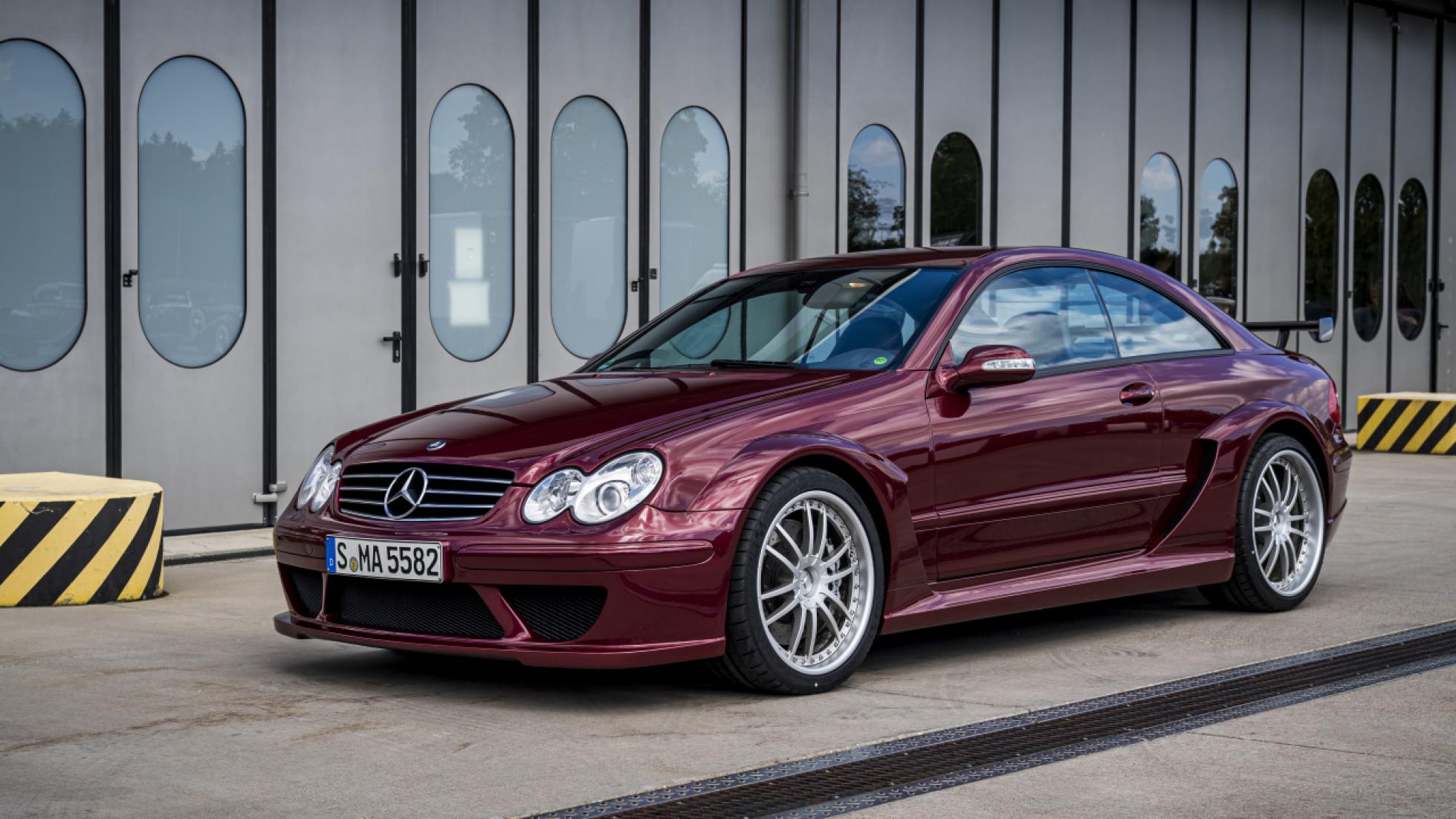 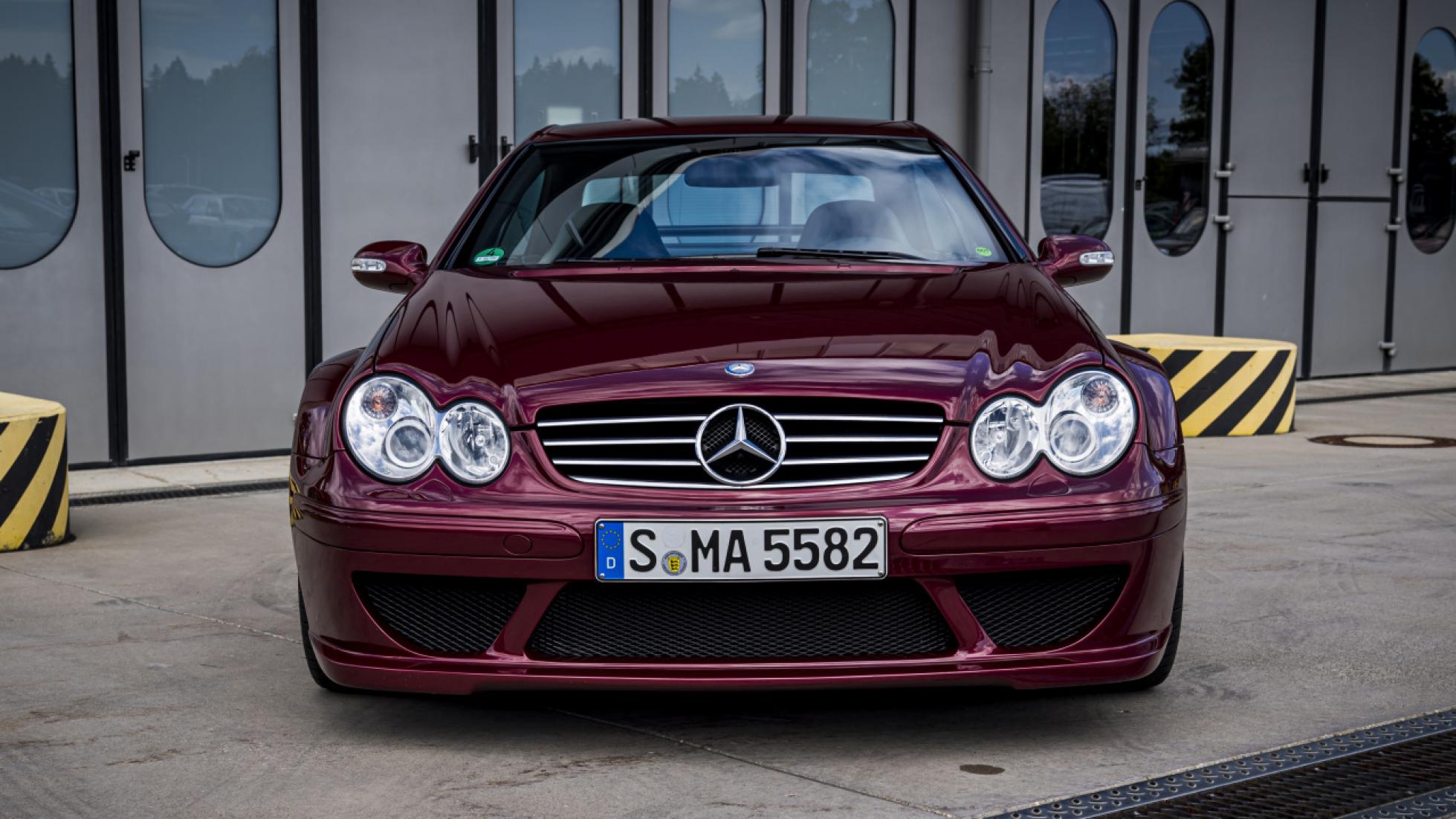 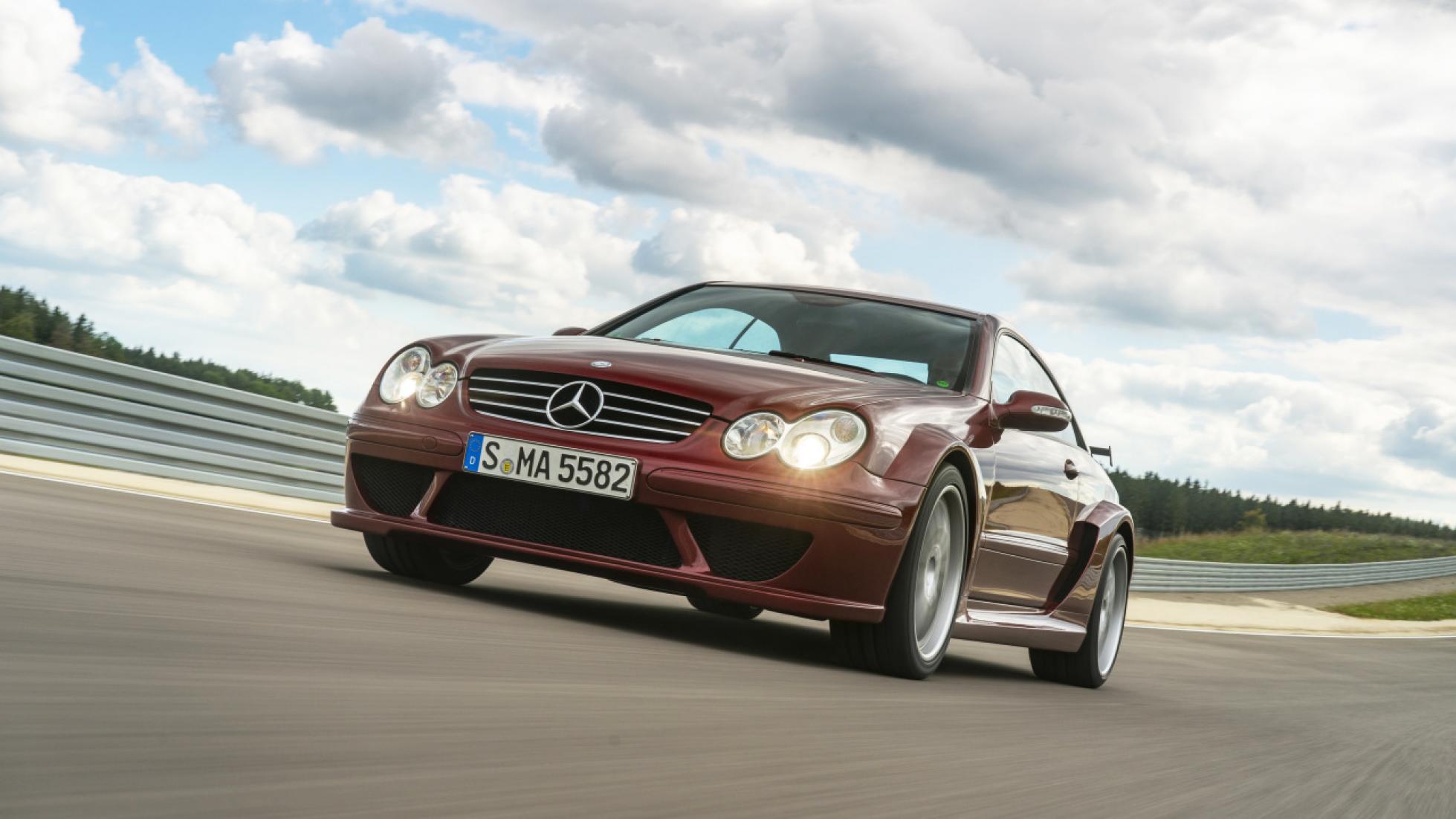 A certain Bernd Schneider dominated the competition for the fourth time, meaning that everyone at top brass level was very happy, and prepared to mark the occasion with some sort of celebratory special.

The result was a CLK with DTM DNA, but configured for the road. Only 100 of these cars were built (with only 40 right-hand drive) featuring a front-mounted, AMG supercharged 5.5-litre V8 driving the rear wheels with a not-inconsequential 582hp.

So a rich person’s plaything then?

Well, not just rich, but talented, too. Owners of the original Coupe included F1 maestros like Jenson Button, Kimi Räikkönen and Takuma Sato, with Montoya and Mika Häkkinen buying into the later cabriolet - which, to us, isn’t quite the same standard of purity. But this was a proto-Black Series before the Black Series, and it has stood the test of time. 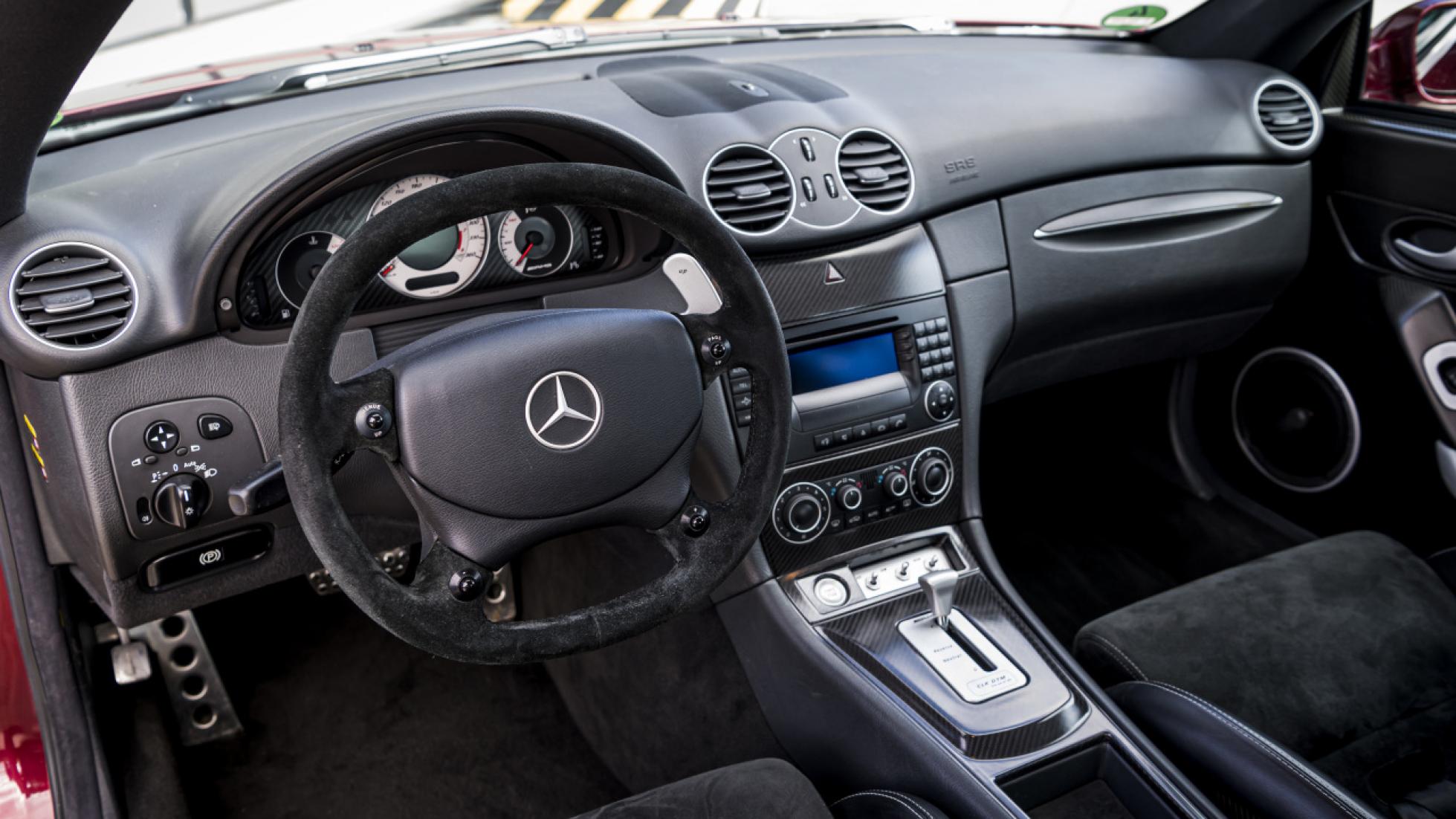 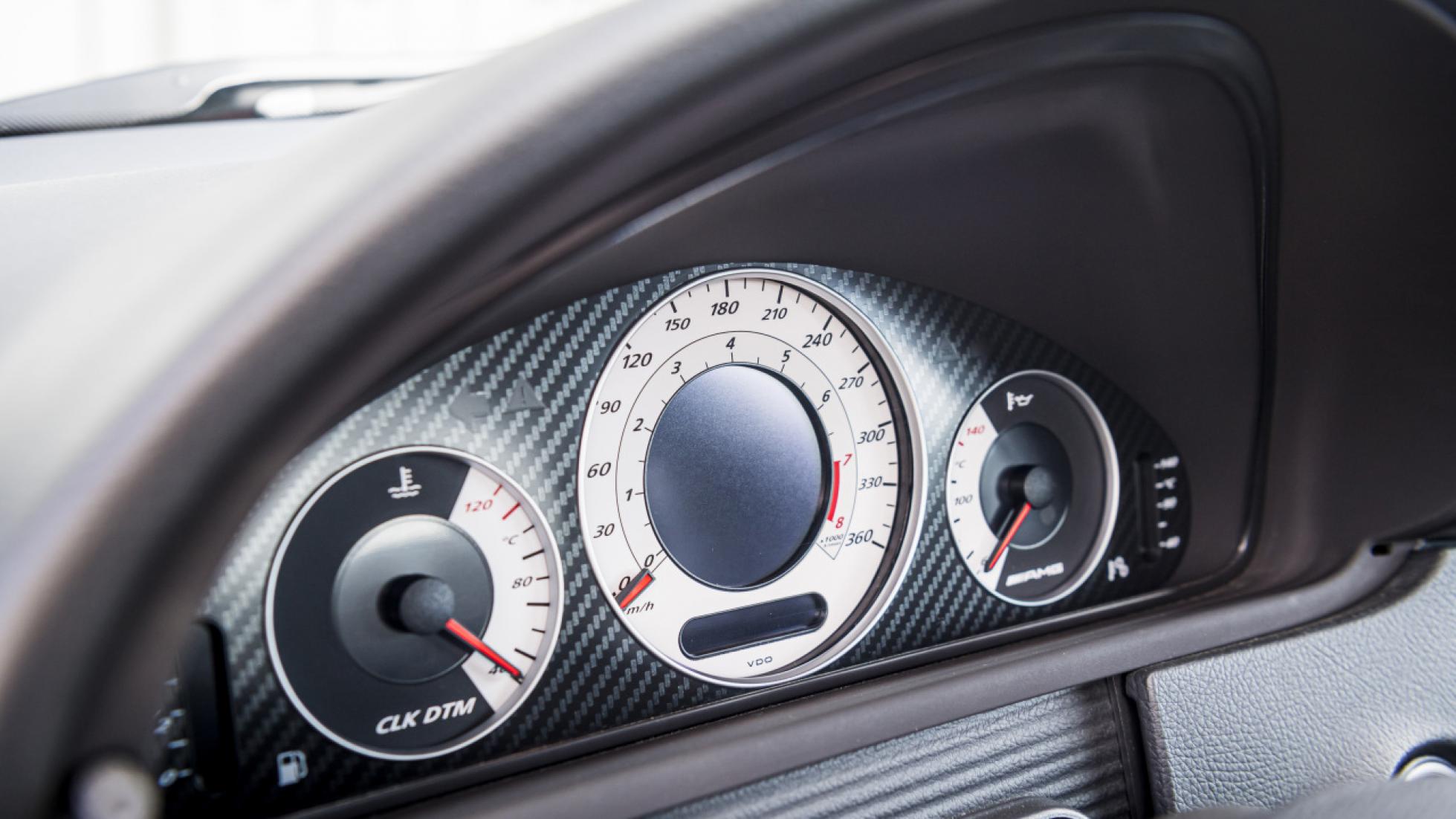 For a start, although it has the requisite bulked and swooped arches (including very slightly Max Power brake cooling ducts venting the swollen blisters) and a decent rear spoiler, the CLK DTM is actually reasonably subtle given the possibilities held within. It doesn’t look particularly insane, and there’s no inch-off-the-floor front splitter or carbon mandolin dragging on the ground behind it as a rear venturi.

Inside, it’s almost quaint: a lot of carbonfibre - including the entire door skin - lots of nice aluminium toggles and switches, lightly offset by some dodgy standard CLK fittings that looked like they’ve been pulled from a contemporary Game Boy.

The seats are racy, the five-point harnesses necessary but a faff. Very necessary actually: for our drive of this retro, very expensive, very exclusive AMG, we are to attack a fast, technical and thoroughly scary Merc-owned racetrack. We are attempting to follow an instructor in a brand new Mercedes-AMG GT R, and that instructor just happens to be… uh.. Bernd Schneider. Yeah, that one.

This is not going to end well, is it?

Signs and portents are not looking good, no. Bernd is one of the nicest men you’re likely to meet, and although Top Gear is on good terms with the Mercedes Benz Museum of Fabulous Old Things from which this car came, Bernd only has two gears: relaxed and smiley Bernd, and Bernd going absolutely thermonuclear in a fast car.

The GT R is faster and more modern than the CLK DTM, driven by a man with approximately 50 times the talent. A man for whom this car was created to celebrate. I also don’t really know the track, and am susceptible to the lies told by my own ego.

Nevertheless, the DTM fires up on the button, a muffled thump of V8 chemistry, the little nubby t-bar of a gear selector is lifted and snicked back into the appropriate position, and we’re off. Pleasantly so, too.

It swans up and around the pitlane like any other AMG product - even the modern stuff. There’s a sense of potential, yes, but it rides well, reacts positively to the throttle and you can see out of it. It idles cleanly, pulls neatly, and generally doesn’t act like the grumpy racecar-lite that I imagined it might be.

We might be okay here, after all. Then we enter the track, Bernd accelerates and I pull the curiously meagre little paddle behind the CLK’s oddly-shaped wheel and stand on the throttle. We are suddenly not okay.

Joyous. Although not, it has to be said, particularly easy going at speed. The immediate thing you notice is the sheer amount of thump for a car that’s 17 years old, the big jet thrust of torque cording your neck muscles. The gearbox only has five speeds, and it only realistically needs three, such is the amount of torque always on offer.

The steering is geared quite high, so there’s not much arm-twirling to be done, and the blare of the exhaust rattles the carbon centre console. Suddenly, the car feels much, much stiffer, and it seems to rail around a corner like a skateboard on the edge of an empty swimming pool.

There’s some body roll yes, but its informative rather than annoying, and the brakes – many, many pistons clamping beefy rotors – are superb even in modern context. It’s not ‘as good’ as a modern fast Merc at speed, but in terms of the experience rather than pure km/h, it’s much better, less electronics, less second-guessing. Even on a track you don’t know?

There are dips and crests, worryingly off-camber lefts and big sweeping 225km/h right-handers, and I never feel like the car will let me down, or do something that might spit us both into the arms of the armco, and from there into the embrace of insurance paperwork.

Bluntly, it’s a handful, but not a menace. You know those slightly odd switches that look a bit cheap? They don’t matter one bit – this car had the money spent where it mattered, and it is resolute, and glorious. It is also quite startlingly fast.

And yet, while I have been ‘heroically’ matching Bernd Schneider in an AMG GT R around a track in a much older car, I suddenly realise something with the kind of prickle that starts at the back of your neck and end at the top of your head: Bernd has been on his installation lap. He wasn’t even trying. It’s not even a speed differential between the two cars – on the first two corners where Bernd is properly going, his braking is so late and so violent that I’m left for dead.

The rest of the lap leaves me dismembered and stored in the freezer. I try, but even though the CLK is heroic, I am found lacking, and the rest of the time is spent learning the CLK DTM a little more thoroughly, finding that even though it resists understeer far more than you would think possible it will still nose wide eventually, gently rotating to oversteer if you stay on the throttle.

That the ‘box is sweet on upshifts, less keen going down; but you can cover up mistakes simply by throwing the motor’s wall of torque at the problem. It’s an honour.

Has it stood the test of time, then?

Modern, clever cars are great. Technology can be wonderful. But sometimes, even the digitally enlightened can fall to the sheer, magnetic power of barbarism. And the CLK DTM is one of those cars that reminds you that ultimate speed is not always the biggest thrill.

In a lot of ways it feels just like any AMG: a modern muscle car of surprising ability and delicacy. But once you push, it feels like a racing car in civvies, an SAS veteran in his job interview suit. It might look relatively sober, but you really, really don’t want to mess.

Several laps later, and Bernd Schneider is back in the pitlane and out of his car calmly sipping a bottle of water by the time I catch up to him. “It’s a fun car, yes?” he says, taking in my sweat-sheened forehead and pale complexion. “I always liked that one…” And here’s AMG testing that very system in some snow. Skids ahoy!