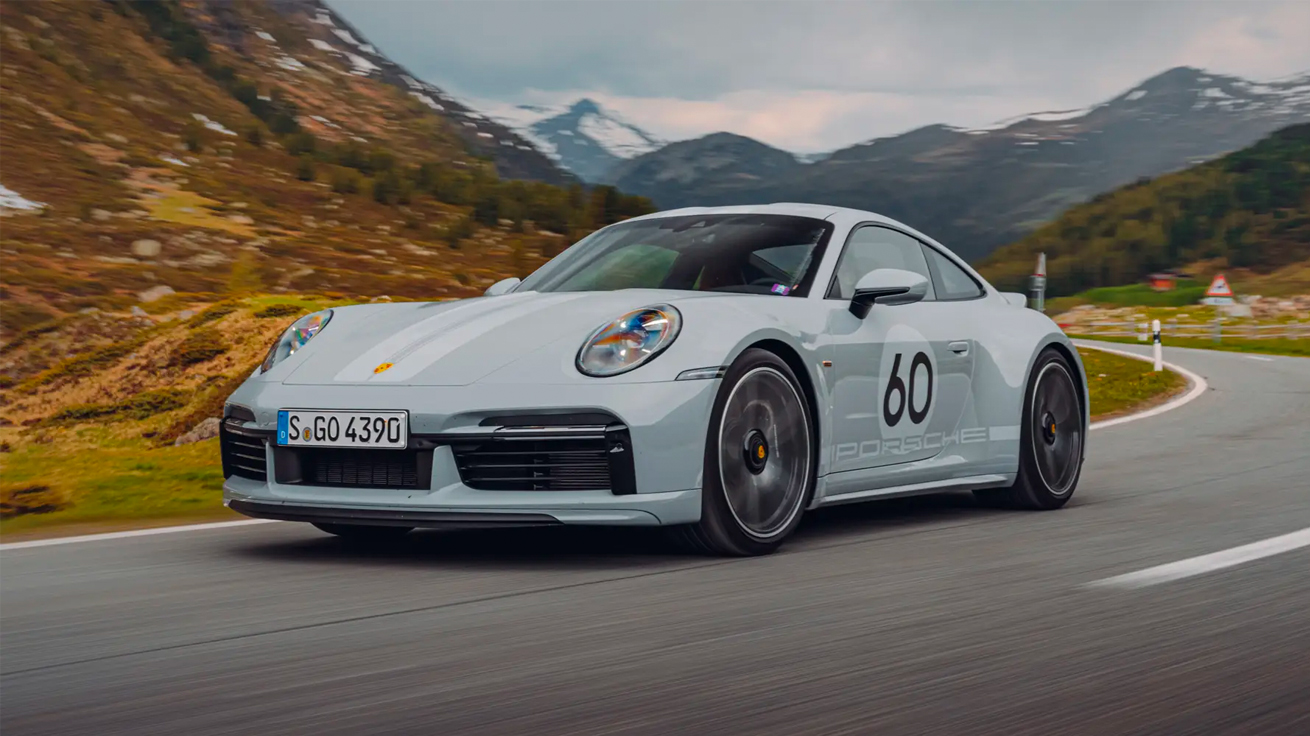 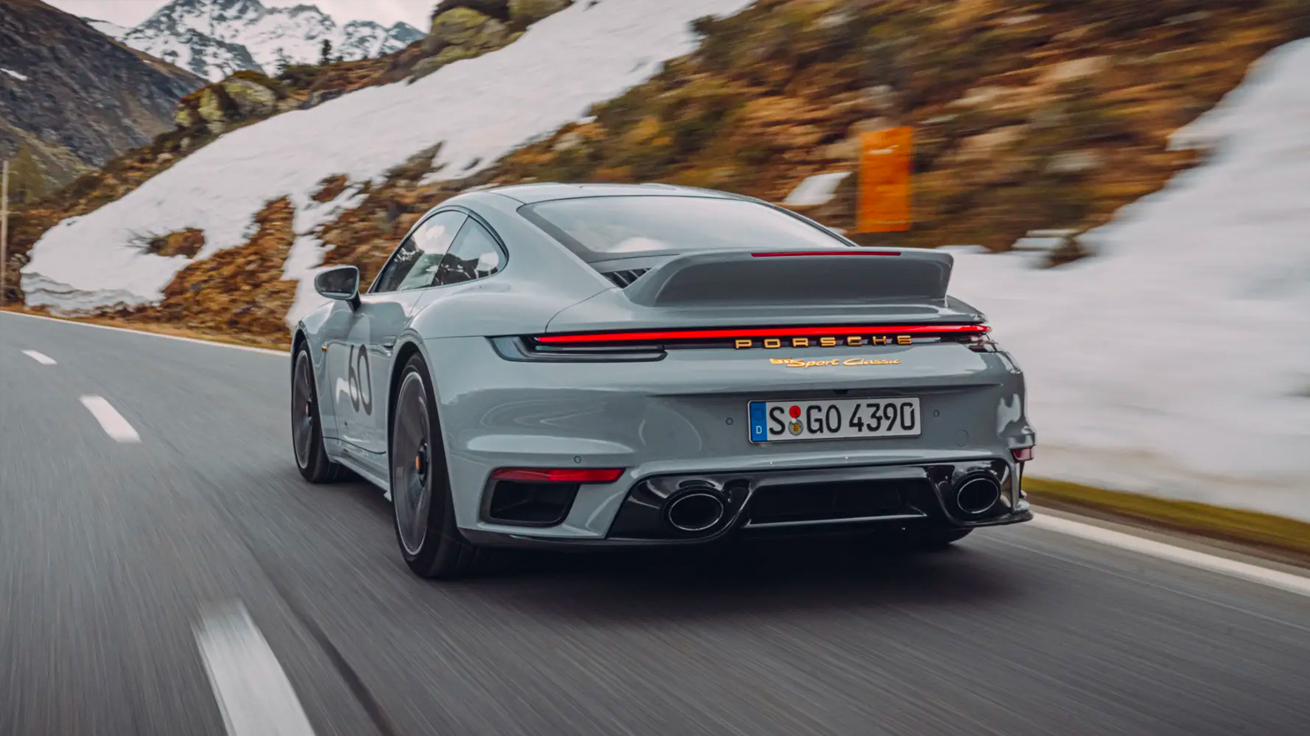 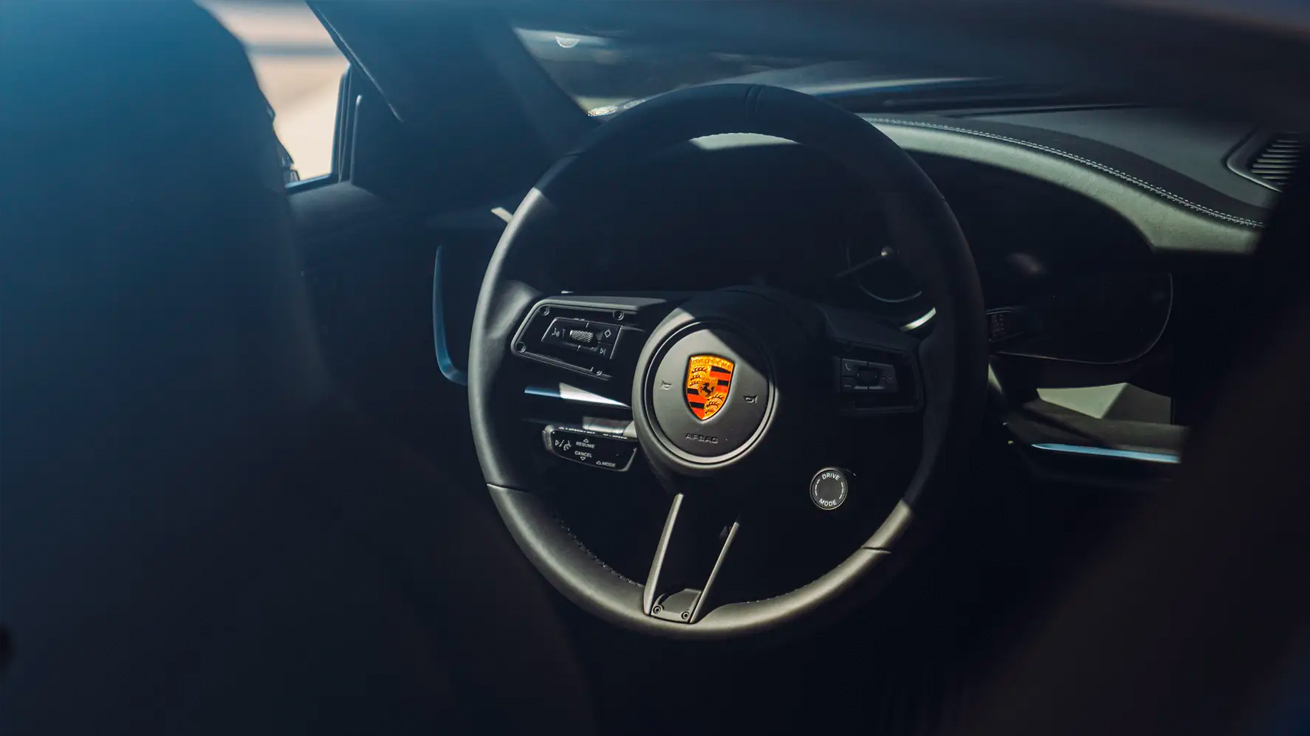 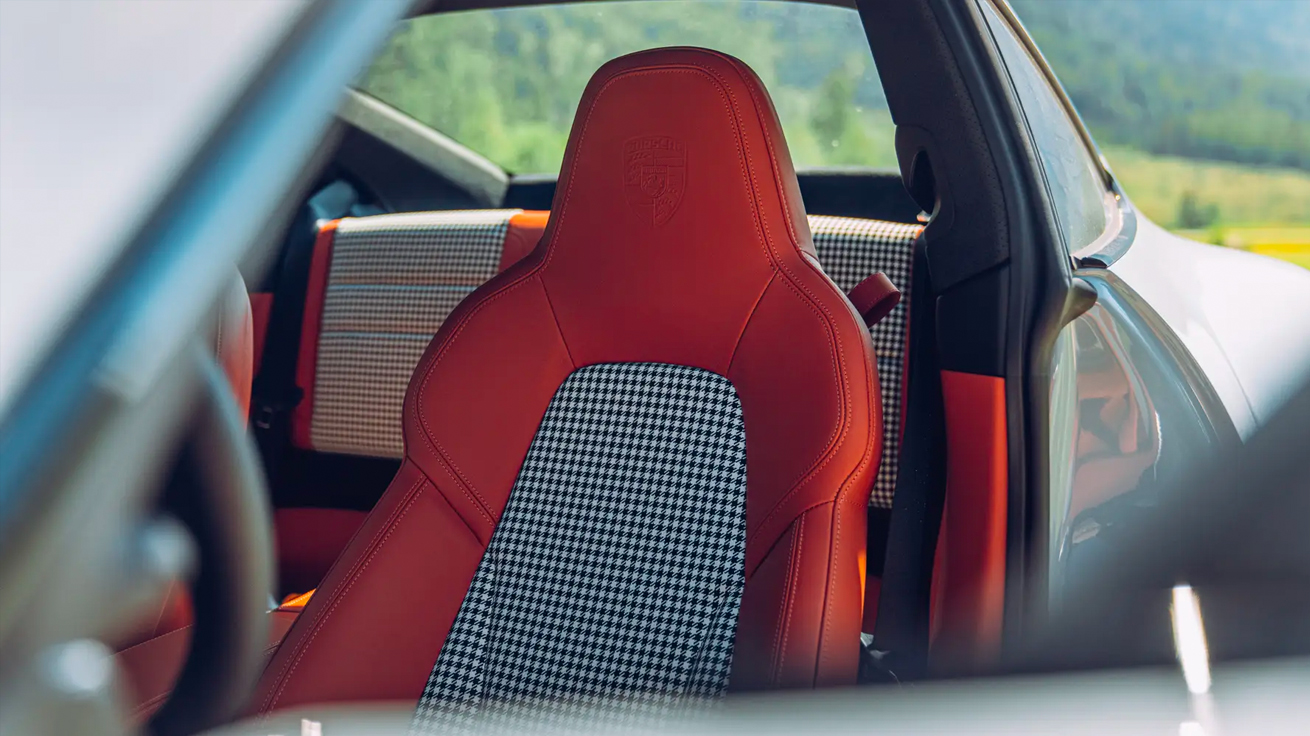 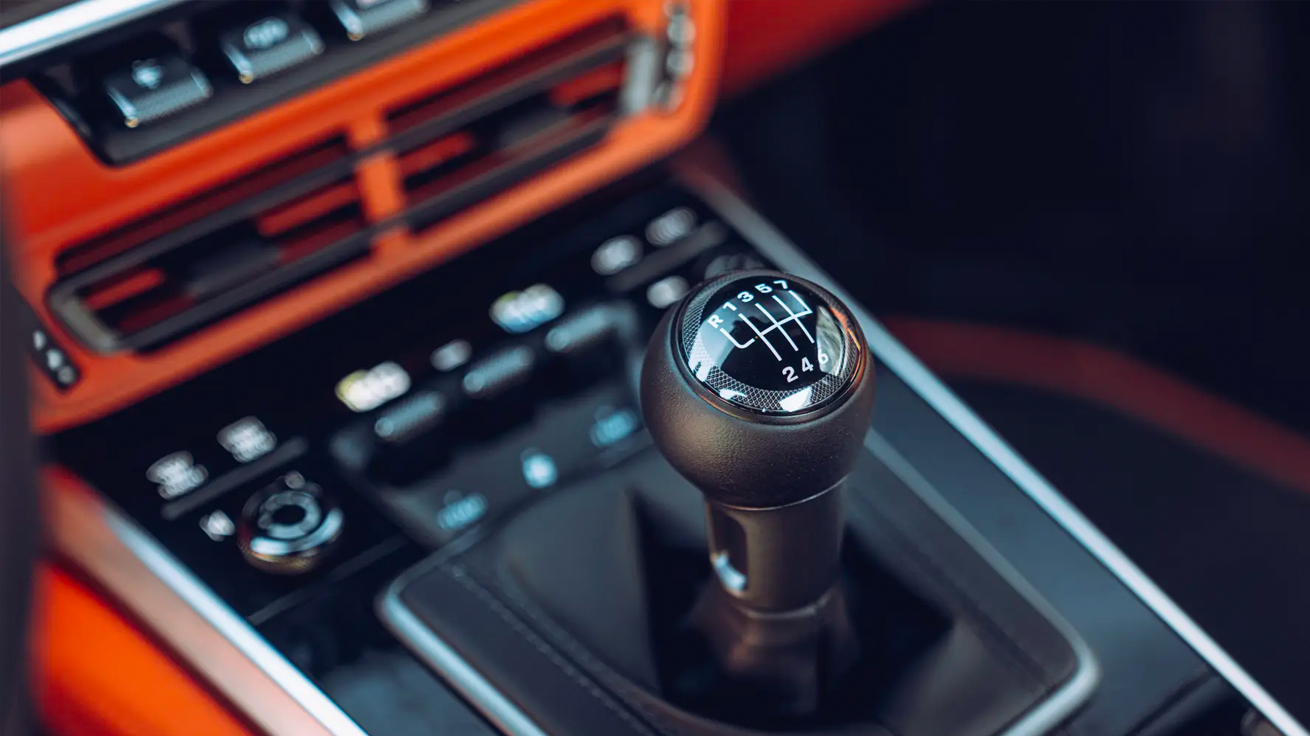 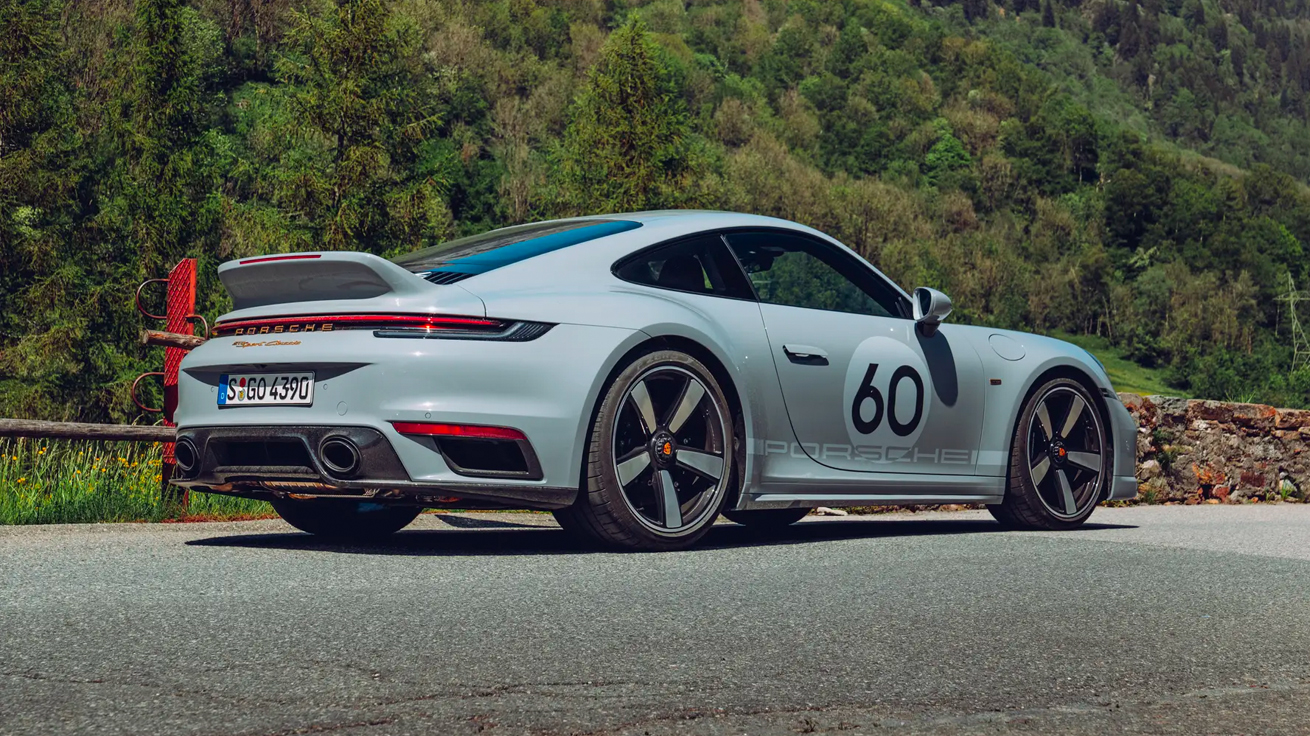 What do we have here then?

The new Porsche 911 Sport Classic. A relatively obscure Porsche 911 with a mouth-watering cocktail of components.

Porsche is quite good at occasionally going against the grain and giving the people what they want.

And ended up throwing a six-cylinder engine back in the Cayman and Boxster? Exactly. Even so, we weren’t expecting this.

A limited-edition, 542bhp widebody 911 with a twin-turbo flat-six, rear-wheel drive and – wait for it – a manual gearbox.

Yep, three pedals and a stick. 542bhp of old-school vibes wrapped up in some funky retro looks thanks to an overexcited bobblehead’s worth of nods to the past.

Oh, and some gawky racing stickers slapped down the side for good measure.

Wait a minute. 911 Sport Classic? That’s ringing a faint bell in my head…

If you’ve just finished your GCSEs we wouldn’t be surprised if that bell isn’t ringing at all.

The fact is it means you’re either a Porschephile or keen petrolhead, so we doff our cap to you. The Sport Classic (SC) was somewhat of an anomaly.

Launched in 2009, it was when the folks in Stuttgart decided to get its most modern 911 at the time (997.2) and deck it out with iconic details from its past.

Porsche charged buyers £140k to go find them – over twice the price of an equivalent standard 997 Carrera S and a chunk more than a 911 Turbo of the time. 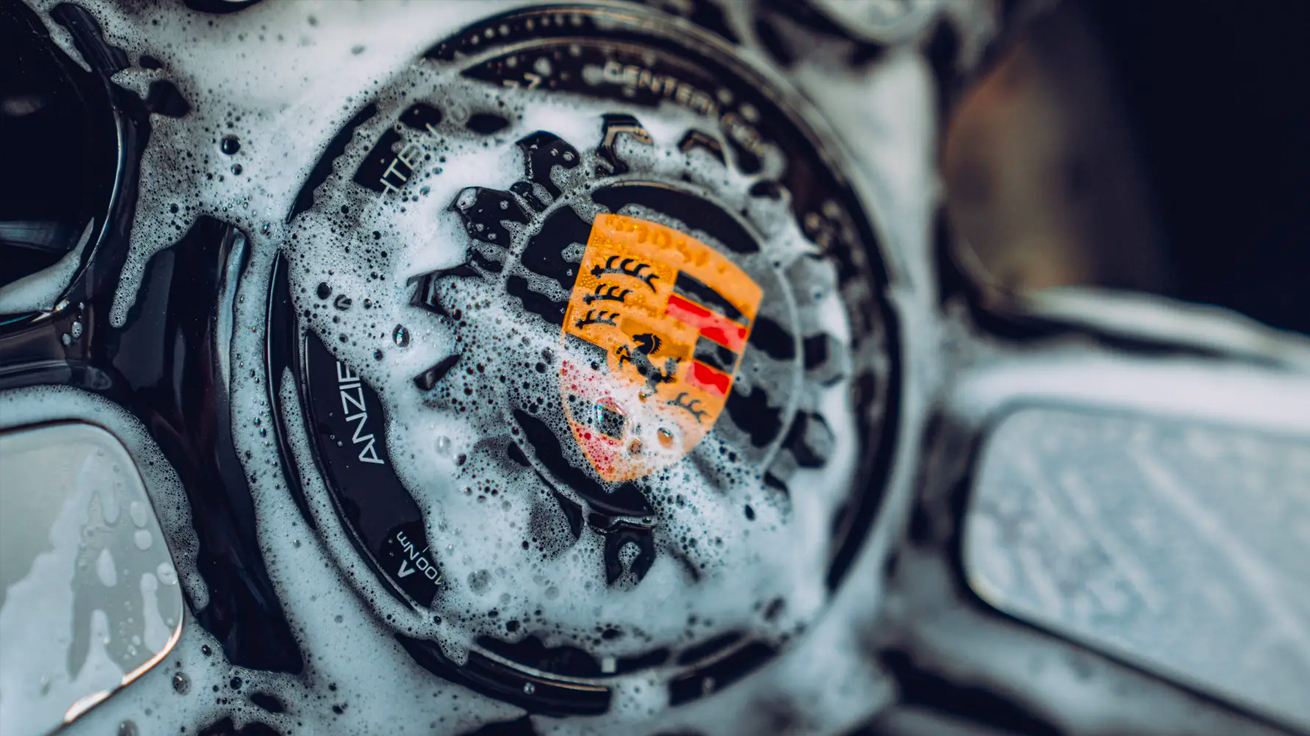 For some, it was quite hard to swallow and left a few people scratching their heads.

But hindsight is a fabulous thing, as the original Sport Classic can now be seen as some sort of canary in the coalmine for the explosive retro movement we’ve since lived through.

It was a pick n mix, mish-mash throwback 911 (with weird clear rear lights) before the whole retro and restomod bomb had exploded.

And, in the now incredibly fashionable world of limited production Porsches, it’s rare as hen’s toenail clippings with only 250 ever made – making them four times as rare as a Porsche 918 and five times rarer than Ferrari F40s.

As you can imagine, the people who did buy them are now smiling, as they’re worth a small fortune.

Is this the same recipe just reheated?

Kind of. Where the first Sport Classic was based off a standard 911, the new one shares a lot of its componentry with the bigger, faster 911 Turbo.

Like the original 997 Sport Classic, the new 992 offers something no other 992 does: a wider body with rear-wheel drive and a manual gearbox.

But where the original Sport Classic had a C4S body, the new one is from a Turbo – so 50mm wider than a standard Carrera or Carrera 4.

And it’s a properly wide thing that wears its hips really, really well.

Helped by not having the Turbo’s intakes carved into the side, the rather flush bodywork looks even wider and has huge 20-/21-inch centre-lock wheels and seriously meaty 315/30 rear tyres for proper stance.

Unlike the previous SC that came with a 23bhp bump in power to produce 408bhp, the opposite is the case in the 992.

To ensure the manual gearbox doesn’t melt from all the low-end turbo torque, the 3.7-litre engine has been turned down from 572bhp to 542bhp.

Seeing as the Turbo’s front driveshafts have been thrown in the bin, the 992 SC is 70kg lighter (1,570kg) than a Turbo, so the power-to-weight pretty much evens out.

Sounds tasty. Is this one still a limited edition?

Yep, but the run has increased to 1,250 examples worldwide (you couldn’t get the old Sport Classic in America) so you’re more likely to see one of these than the 997.

Considering 911 Turbo S prices have gone bananas and are swapping for similar numbers on the second-hand car market, expect these to skyrocket too.

Oh, and you can get it in five other colours instead of just grey – we recommend the dark blue.

It sure does look rather snazzy.

Doesn’t it just? With that unique gold lettering (it’s genuine gold too) and sophisticated measured details (check out the sixties-style weaved floor mats) it’s a lot more resolved than the previous Sport Classic.

But Porsche has learned a lot over the last 15 years, especially what its customers want from a retro-inspired car. Mainly, because it’s had a lot more practice. And lots of third parties are doing it too. 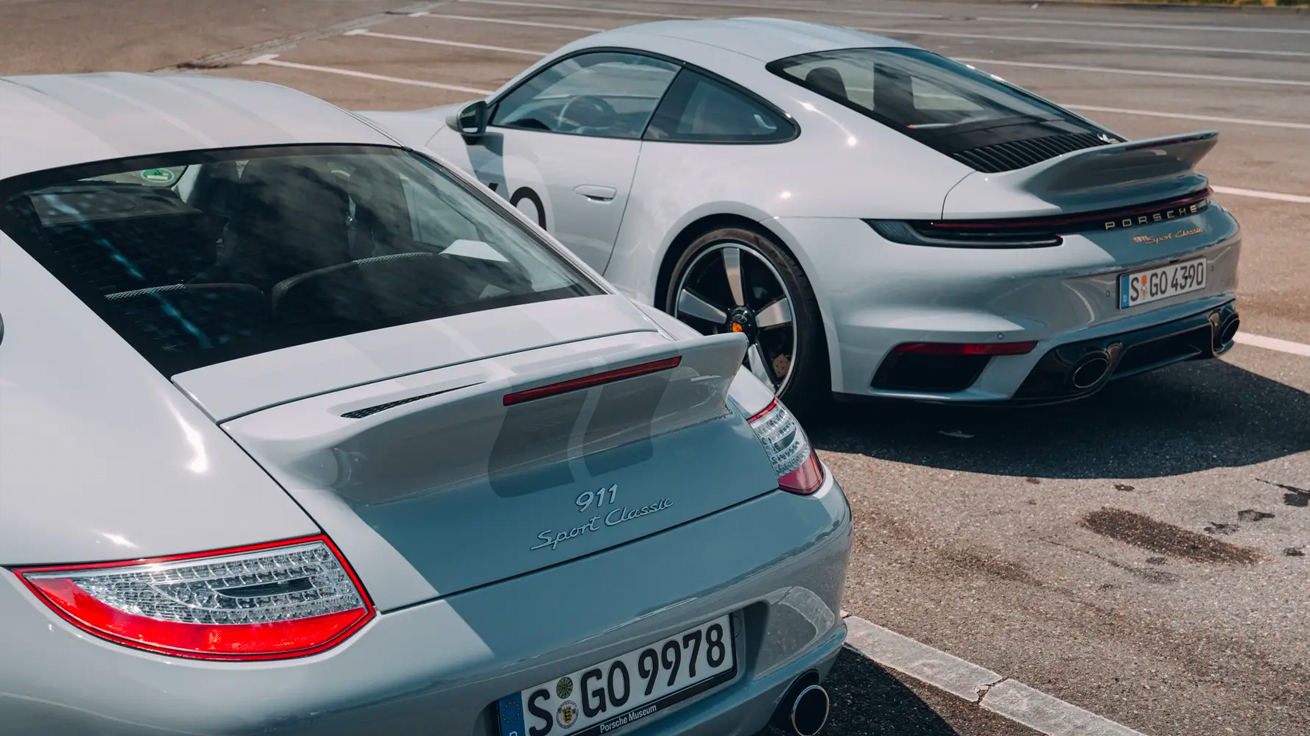 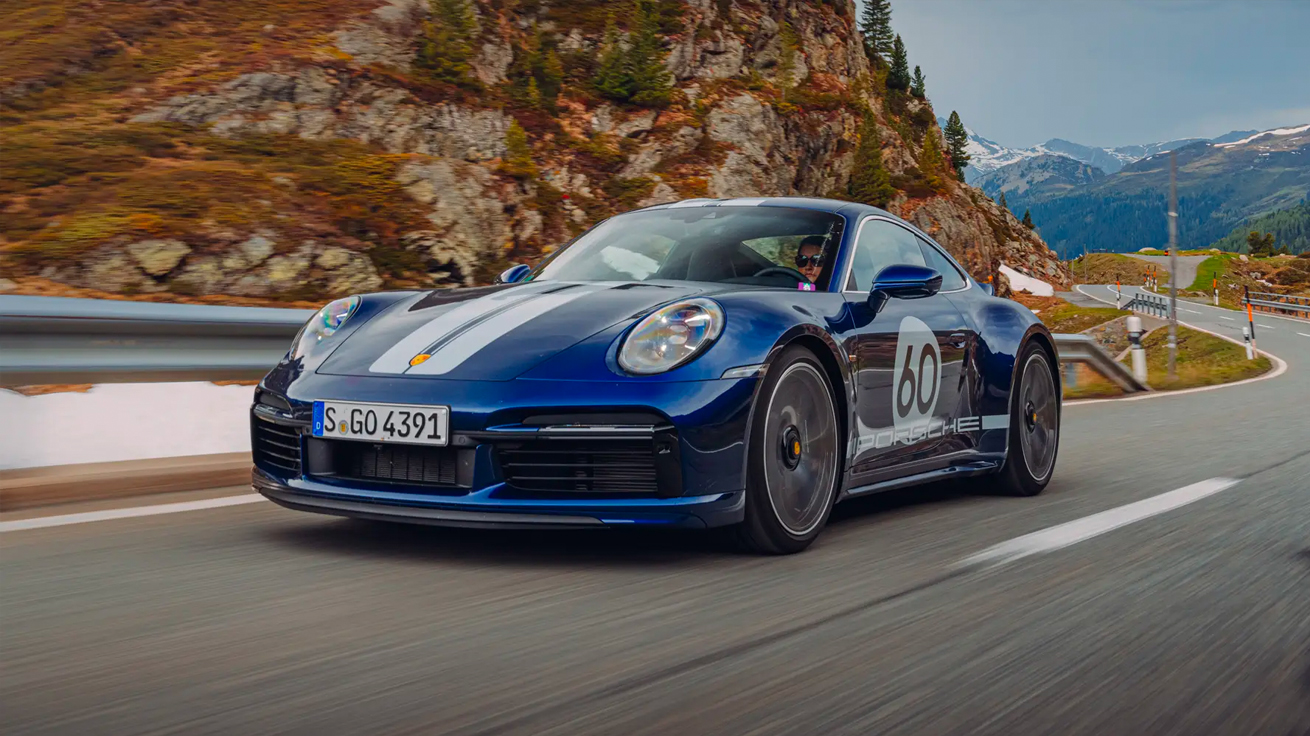 This is a fully in-house project and the second of four ‘collector's items’ that Porsche will present from a so-called ‘Heritage Design strategy’.

That’s where Porsche’s general styling team have teamed up with its bespoke ‘Exclusive Manufaktur’ team to reinterpret four iconic 911 models from the 1950s through to the 1980s.

So, what exactly is new?

Well, the bonnet, double-bubble roof and ducktail are all carbon and feature hand-painted double stripes.

There are vintage 1963 Porsche badges everywhere, new wheel designs and a seriously cool two-tone interior made of black nappa and cognac leather.

It’s set against a deliciously light open-pored wood dash embedded with gold emblems and the iconic Pepita houndstooth (black and white diamond pattern with slanting stripes) in the doors and seats.

Fabulous. You wouldn’t think it looking at the pictures, but the Sport Classic has a completely different attitude to other cars in the Porsche range.

It’s a car that offers effortless GT appeal and pulverising performance, all within a purposefully muscular yet wonderfully austere and mature package with a unique sense of tactility and old-school engagement.

Let me guess, something about manuals blah blah blah…

Hear me out. I know people get incredibly hung up on the #savethemanuals campaign but this car really proves that having a gearbox you need to stir yourself makes a difference.

The seven-speed stick completely changes how you interact with that turbocharged flat-six engine for the better.

You can play it like an instrument, taunt it, tease it and make it make noises I’ve never heard a 911 Turbo make. It’s a car that can be driven fast or slow. And loves both.

The cabin has a fantastic ambience, one like a trendy members’ club.

The seats are sensationally comfortable (if not a little high) and in front of you sits a glistening analogue rev counter with white hands and dayglow green markings behind, just like an old 356.

At five o'clock on the wheel there’s a little rotary knob that allows you to switch between driving modes.

Fire it up and the car chunters quietly with a light clutch and effortless, precise steering.

Where a PDK wants to rush up the gears, with this seven-speed you get to decide. You can chase the revs in a lower gear or surf the torque in later cogs – it becomes instantly more experiential. Is it any good on the road?

Yes, it’s suited perfectly for the road and isn’t champing at the bit for a race track to let loose.

The electronically assisted steering and damping (based off a 911 Turbo and 911 GTS) work together ironing out most of the road imperfections and provide crisp feedback unobstructed by all-wheel drive.

Even with a sports exhaust as standard, the engine is muted out back, yet it is a deceptively, wickedly fast thing.

This makes it an exceptionally easy and comfortable GT car in which to unfurl hundreds and hundreds of miles.

If you want to turn it up you twist the rotary knob to Sport+ and you get more noise, character and mellowed aggression.

The car tightens up nicely, becoming harder and sharper and instantly lulls you into travelling at speeds that you just didn’t think relevant, or actually possible.

It’s just far too easy to go fast in but also an engaging ride because of one thing: BOOST.

No, the time between mashing the throttle and feeling the rush of torque from a beastly turbocharged engine.

Boost is being eradicated through technology, clever gearboxes and electronic torque fill but not having a PDK swap cogs for you makes turbo lag more present and adds a sense of nostalgia to the driving experience that’s exciting.

Immediacy isn’t everything; something EV supercars with their instant torque are quickly finding.

With the manual gearbox you have to manage where the optimum performance is, using all three pedals (or the spectacular auto-blipper) to prod the engine into a yowl with every downshift and find the power.

The Sport Classic combines so many elements of enjoyable driving it adds up to feel like a super 911; from feelsome steering that’s unobstructed by driveshafts, to the staggering carbon brakes, exceptional grip and rear traction you can’t quite believe (or trick as it cuts power on clutch kicks) and the unique flat-sixy intake noise that fills into the cabin. It’s a class act.

Like the 911 R, the Sport Classic is not really a car about figures, in all honesty they’re secondary to the experience.

In fact, it’d probably go faster than that. You can feel the torque being limited in the first three gears to save the gearbox, so if it could give you the whole lot in one hit it’d go even faster. Plus, it’s down to how good your shifting is.

Will they make one that everyone can buy?

Good question. In the past Porsche has tested the water with limited editions to then make a mass-produced version; where the original Sport Classic effectively became the GTS variant, and 911 R became GT3 Touring, could we see this offered as a mass-produced car Turbo Touring?

We’re not sure. But we hope so.