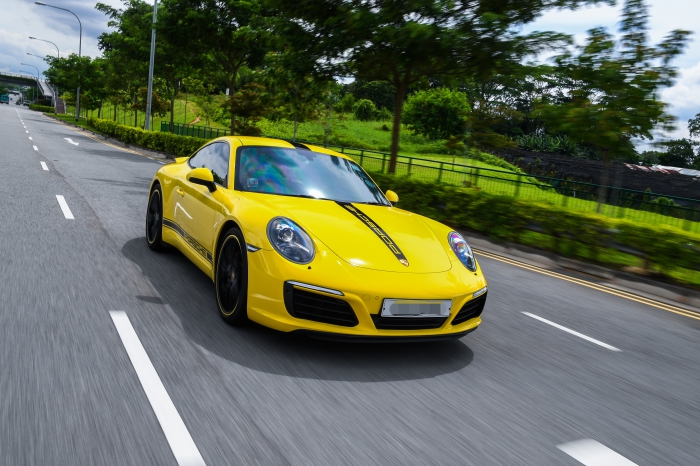 More than 50 years separate the cheeky yellow 991.2 Carrera S from the oldest in this company, the 356 C, but you’d be surprised at how the more things seem to change, the more they stay the same.

Its plump, pumped-up body makes it look like a giant in this company, and certainly demonstrates how big cars have become over the past half century.

However, the silhouette is unmistakable, and can be traced all the way back to the very first cars that would evolve into the 911.

All 911s look like nothing else on the road, save another 911, but you’re always able to discern the elements that differentiate one generation from another, even if the basic form remains unchanged. If it ain’t broke, what’s there to fix? 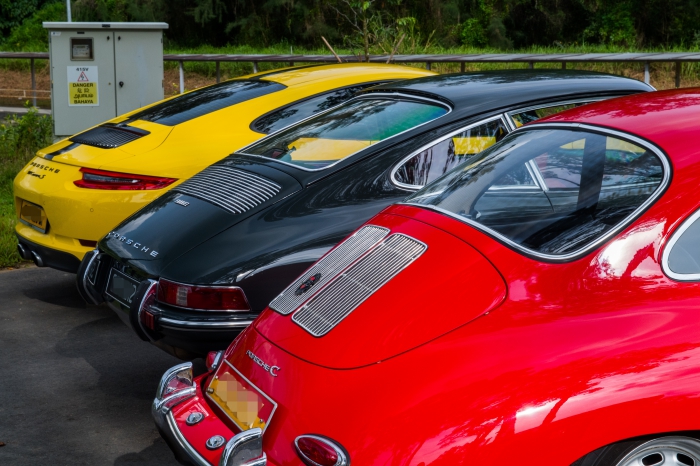 True to the theory of evolution, cars haven’t grown in size just for aesthetics, but also to accommodate the larger tyres/rims and brakes necessary to provide the grip and stopping power to cope with the needs of increasingly powerful engines.

The competitive landscape has changed a lot through the years and the major brands now have offerings that have the 911 squarely in their crosshairs, which is why Porsche needs to continually chase faster times on both road and track. 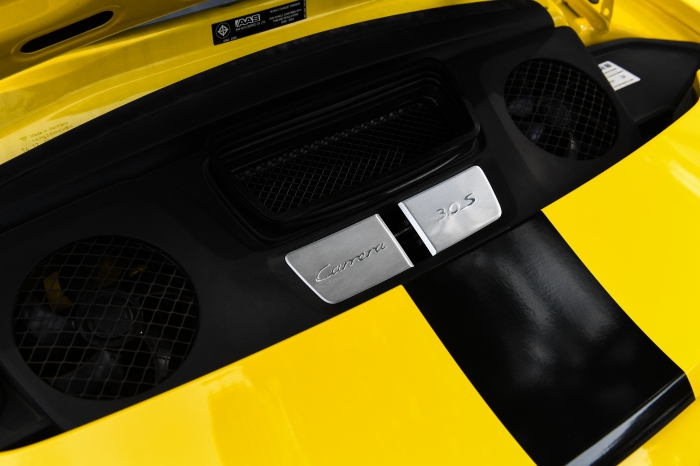 Unlike its Carrera forebears, the 991.2 Carrera models are now animated by a revvy biturbo 3.0-litre flat-six engine in two states of tune. Such is the price of increasingly stringent emissions standards, which have all but eradicated the glorious high-revving naturally-aspirated engines.

Visually, the C2S engine lid now boasts vertical grilles, just like the 356, and the engine has been tuned to deliver 420bhp and 500Nm – something unthought of 50 years ago!

Despite its sporting credentials, it will readily accommodate two passengers in the rear, just like its predecessors – this trait underscores the 911’s raison dêtre as a practical sportscar. 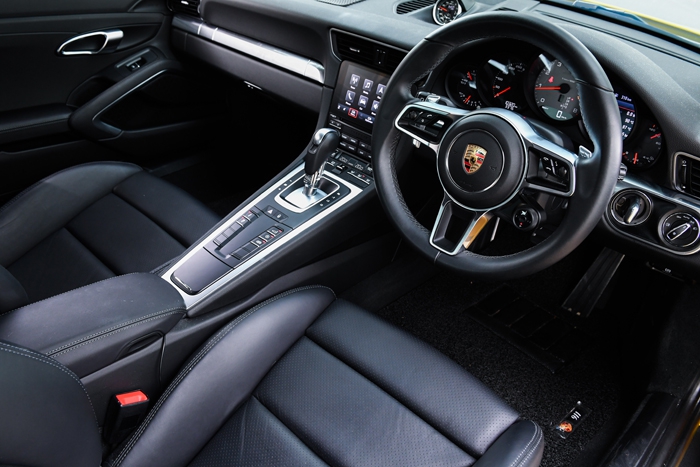 The flat-six fires up with an almighty rumble that gets the ground moving and shakes the panes of the two old’uns. The C2S is now keyless, but starting the car still requires turning a ‘key’, instead of a starter button – think of this as a handshake to seal the deal, since it takes two to tango: you and the car.

On that topic, electric power steering may have pervaded all makes and models, but only a few are like Porsche as far as steering feedback is concerned. There are proper two-way dialogues, where the driver not just touches the steering wheel to steer, but it ‘touches’ you right back by apprising you of everything about the road surface the tyres are in contact with, as well as how far along the car is with regards to the traction circle. 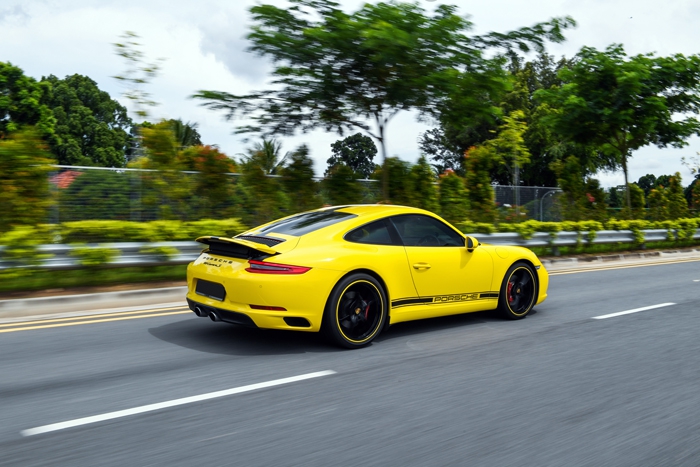 The C2S’s grip levels are commendably high so you’re unlikely to ever breach them on public roads, but you’ll have enough of a good time without the commute ever feeling like a chore, even at strictly legal speeds.

Also, to help the C2S turn-in even sharper, Porsche’s rear-axle steering technology from the GT and Turbo models can be specified as an option on the car. Although this car doesn’t have it, we’ve sampled it on another occasion and discovered it makes cornering more of an incisive affair. However, don’t be mistaken and think that the C2S is only about the grip, because it’s remarkably easy to break traction in the rear to indulge in smoking sideways shenanigans if your heart desires, so it admirably combines the fun and friskiness of the older cars with the seriousness of an athlete going for the gold – as everyone knows, the sideways route around the corner may be the most enjoyable, but never the quickest! 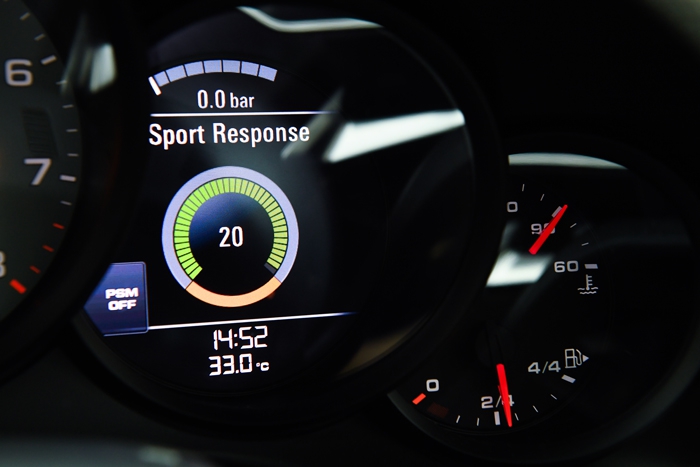 Gone are the days of laggy turbo cars, because the C2S reacts and snarls instinctively to prods of the gas pedal, with both the low to mid-range punch characteristic of forced-induction – the turbos come on song from under 2000rpm – as well as the upper rpm pull better associated with nat-asp engines.

In addition to the familiar lap timer atop the dashboard, optioning the Sport Chrono Package now sees a new steering wheel mounted rotary ring ‘mode switch’ to toggle between the different drive programmes, – anoraks might like to learn that this is inspired by the hybrid mode switch on the 918 Spyder. 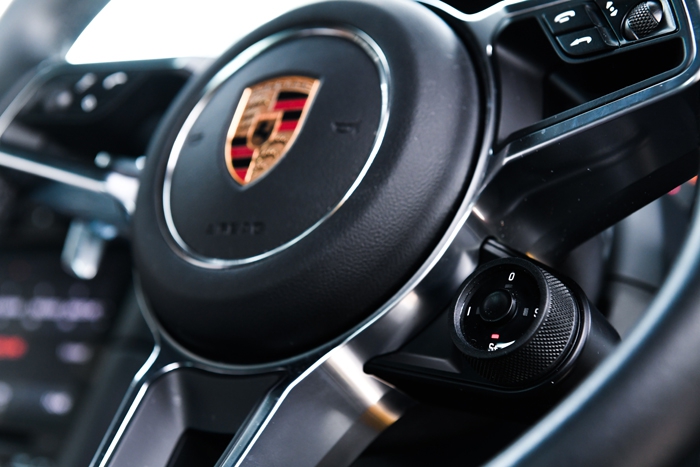 Also making a debut on the 991.2 is the Porsche Sport Response button, which primes the engine for a quick burst of acceleration – it works like an adrenaline shot to the brain, as the car goes into overboost for 20 seconds, so you can overtake, blitz down the track straight, or just enjoy the rush on an open highway like a yellow bolt of Pikachu’s greased lightning. 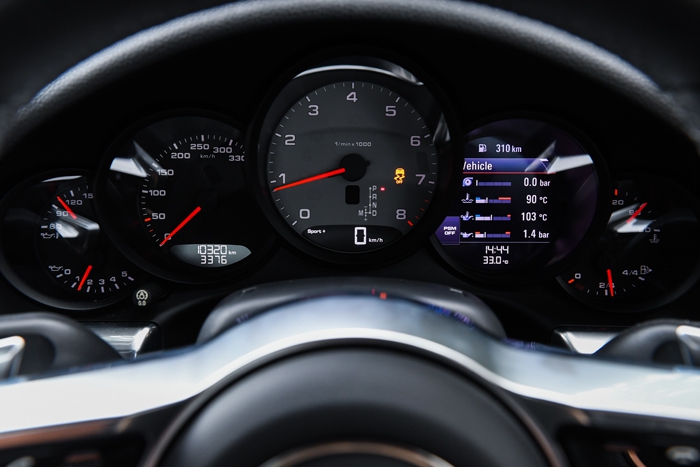 The 991.2 is as digital as the 911 E and 356 C are analogue. With everything controlled by computers, adjusting driving mode, suspension damping and exhaust note is a button away.

Such high levels of engine performance channelled through the rear wheels means electronic nanny aids are more necessary than ever to keep safe the owners who have more money than driving sense.

Through the years, the 911 silhouette has remained largely unchanged from the 1940s 356 original, and is a veritable design icon that looks timeless to this very day – if that’s not a testament to its cult appeal, we don’t know what is.

Notwithstanding the hardcore GT models, the current 911 has spawned fifteen over variants in Coupe, Cabriolet and Targa guises, as well as rear- and four-wheel-drive models, so as you can imagine, there’s something for everybody.

In fact, considering how exhaustive the portfolio is today you’d never have imagined that the brand arose from more humble beginnings with just a mono-product that was the 356.

Ultimately, it is Porsche’s technical expertise and commitment to driving pleasure – this latter trait is inextricably woven into every model’s DNA – that has created a veritable performance juggernaut with the rise of its machines... 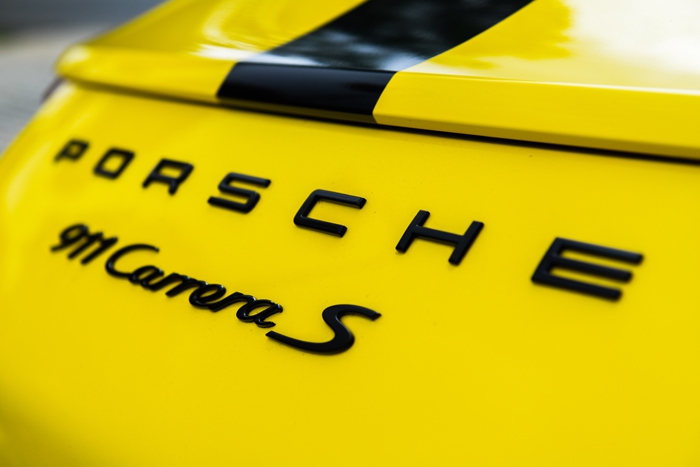 What if the Taycan hadn’t been electric? What would a new 550 Spyder look like? Find out now