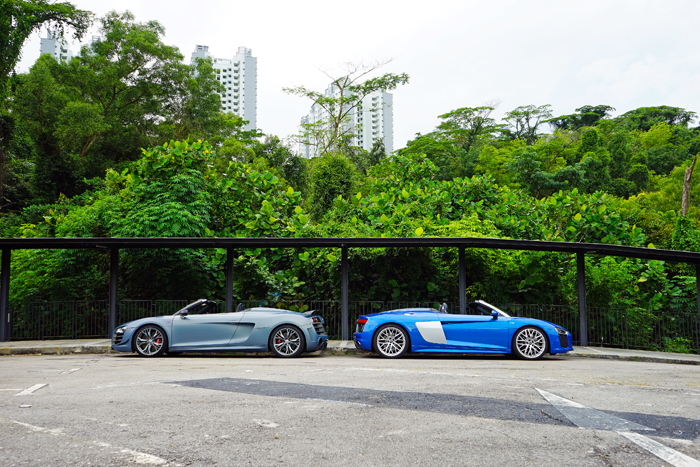 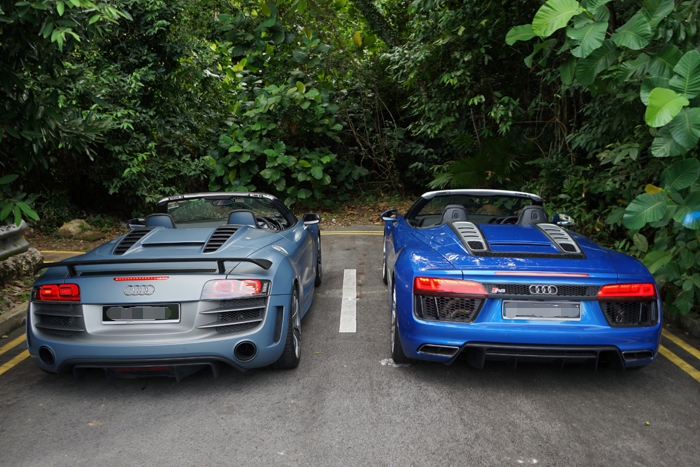 SINGAPORE – High-revving nat-asp engines are best experienced au naturel, so what better of way savouring the R8’s operatic V10 at full chat than with the soft-top down?

Of course, superficial haters are always gonna hate because drop-top Spyder models are seen as ‘softer’ than their Coupe counterparts.

However, chassis technology in sportscars has come such a long way that scuttle-shake and rigidity are no longer the deal-breakers they once were, unless of course, you’re scraping the bottom of the barrel.

Even the ’08 S2000 we were running close to ten years ago was properly rigid thanks to Honda’s high X-bone frame – and it was no compromise as far as dynamics were concerned.

The Ferrari 430 Scuderia Spider 16M too (of the same era as the S2k), delivered ferocious performance and a rousing soundtrack to rival its Coupe counterpart that was barely dented by the lack of a fixed roof.

All we’re saying is, the latest sportscar drop-top offerings should at the very least rival, if not surpass these. 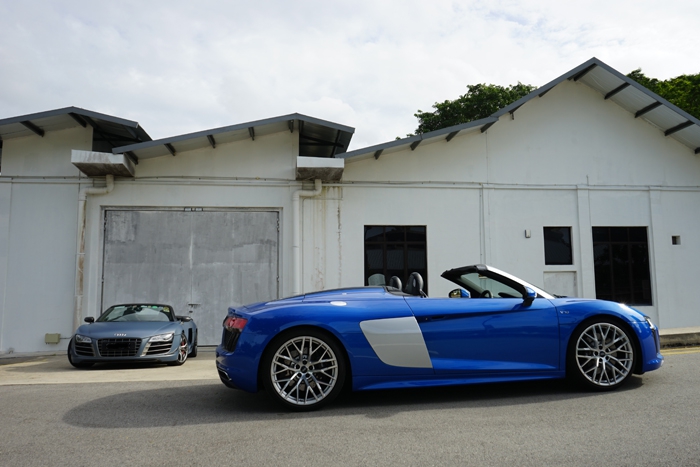 Compared to ungainly hardtop convertibles, soft-tops strike a chord with us because of their soft, elegant silhouettes and svelte rear treatment that become possible with the cloth medium, not to mention the obvious weight benefits vis-a-vis a folding hardtop and its accompanying hardware.

The R8 Spyder versus 570S Spider (folding hardtop) is probably the most divisive (following the introduction of the 720S, McLaren 570S prices have been properly rationalised and the Spider now starts at S$8+k before COE and options), but we think the choice ultimately comes down to engine flavour and aesthetics, especially if you’re smitten by the Mac’s sexy dihedral doors.

A quick qualification: We haven’t driven the Mac in Spider form, but based on bald specs alone, there’s little doubt the V8-engined turbo’d patootie will run rings around the R8.

However, unlike the 720S we were so quickly enamoured with, we can’t say we’ve been firm fans of the 570S Coupe, so despite the Spider’s vital stats and short of a drive, the jury’s still out as far as we’re concerned. 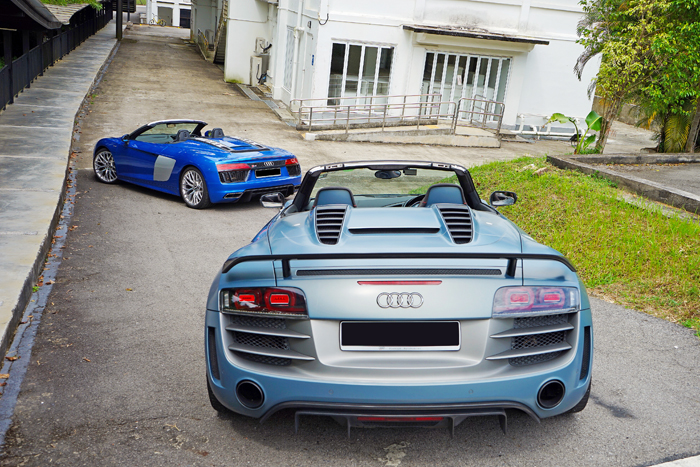 Although the Top Trumps showdown is good for kopitiam clashes, one’s choice is more often grounded in emotion than hard facts – the latter is empirical, but an emotional connection tugs at your heartstrings.

Ultimately, it’s about tickling one’s fancies rather than overcoming one’s inadequacies… if it’s the latter you’re after, you’re better-off looking elsewhere, since the R8 is regarded as a thinking person’s sportscar. 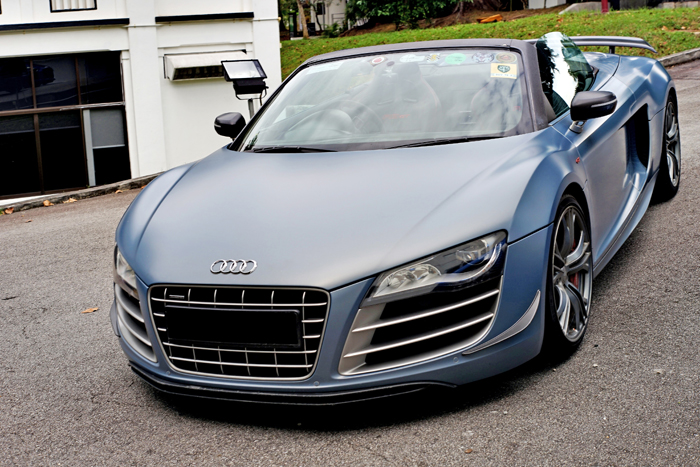 In the first generation of the R8, there was a delightful, limited edition ‘drive-happy’ GT towards the end of its life, a lightweight, hard-edged V10 variant in both Coupe and Spyder guises.

It is the latter we have with us today, along with Claudine Ho - its larger-than-life owner - an Audi die-hard who counts a B7 RS 4 Cabrio, V10 RS 6 Avant and RS 3 in her tally of cars. 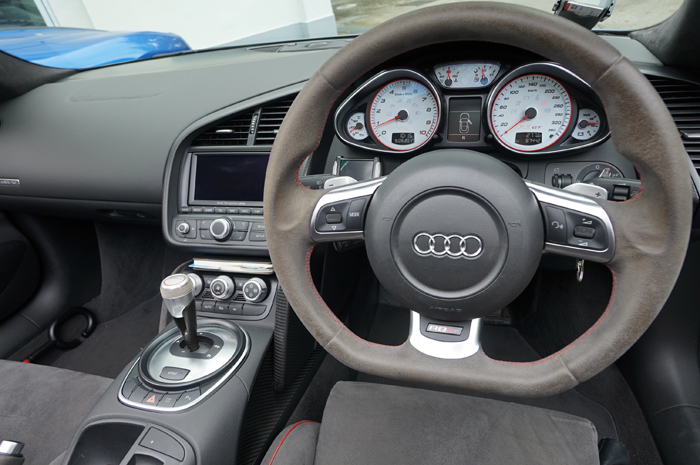 As far as we know, it’s the only GT Spyder in Singapore (versus a handful of GT Coupes), but like its owner, this is no garage queen that is babied, because it is driven as fast and as furiously as quattro GmbH intended it to be. 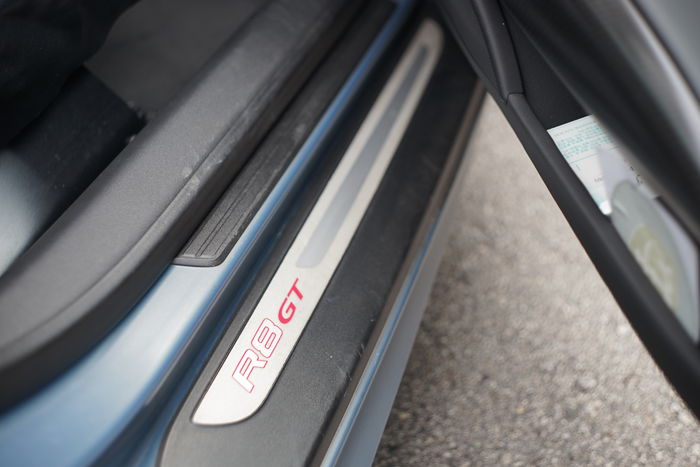 Basically, the GT Spyder drop-kicks that familiar enemy of performance – weight – by shedding 85kg from the standard first gen V10 Spyder thanks to the liberal use of carbonfibre and magnesium. 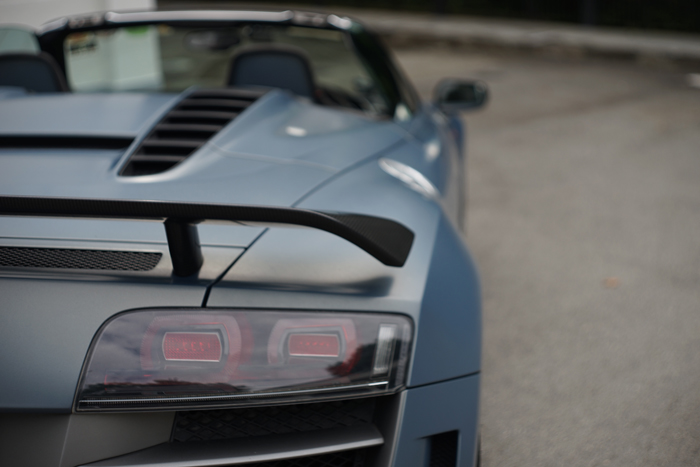 It tips the scales at just under 1650kg and boasts trick chassis tweaks to endow it with fabulous reflexes and incisive handling, so no, the GT isn’t just ‘another R8’. 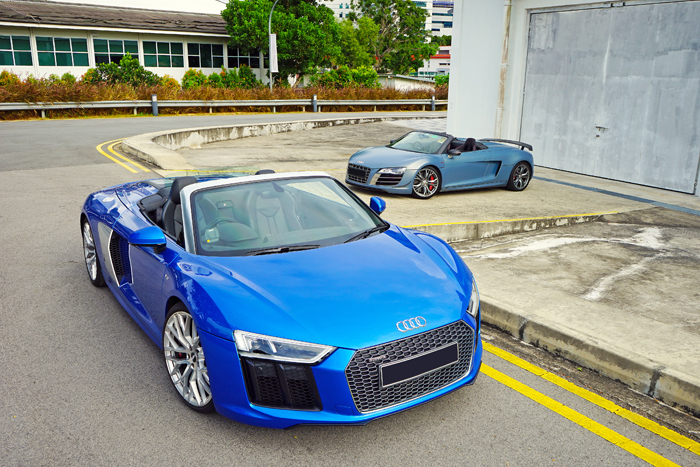 The new model is almost 80kg heavier than the GT (so that’s about the same as the first gen R8 V10 Spyder), but it has been tuned to be marginally faster (0.2secs faster in the 0-100km/h and a 1km/h faster top speed) and more compellingly in our times, eco-friendlier than its GT predecessor. 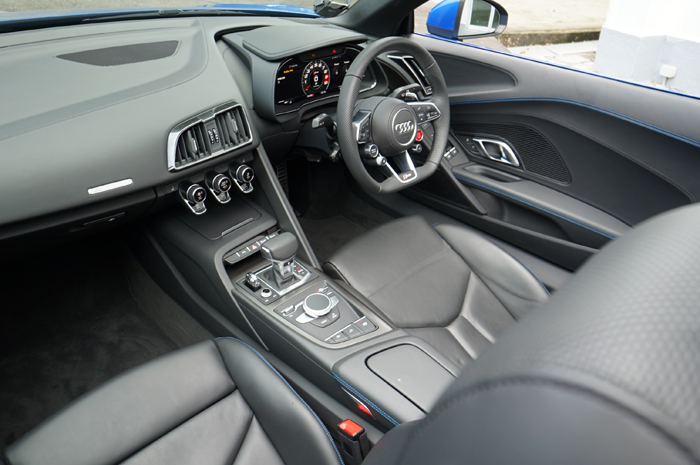 Like the last of the first gen R8 V10 plus, the new model boasts a S tronic 7spd dual-clutch transmission (versus the GT’s 6spd single automated R tronic gearbox).

In case you’re wondering, the car’s Matte Sphere Blue is a factory colour and not a cheap wrap, and it’s surprising how the matte colour really ‘pops’ on the streets, with plenty of people eyeing it when we were out and about.

The rear pipes ignite with a shout and a bang before settling into a low threatening growl, more big dog with vicious bite than fluffy yappy annoyance that makes a lot of noise.

Of course, the new car seems as angry sounding, but it’s slightly more contrived compared to the grungy organic angst of the GT.

It’s the millennial trying to channel the inimitable Kurt Cobain, but comes across as whiny teenager instead of tortured soul, simply because it’s hard to be darkly emotional if you’re too comfortable in life. The GT exudes serious intent, from the fixed rear carbon wing (like the new R8 V10 plus coupe)... ...and racing shell seats to the liberal use of Alcantara... ...and wind-sculpted wing mirror stands. However, it’s the Porsche RS or Honda Type R OCD-approach to weight-savings applied to the things you can’t see on the GT that really tickles this petrolhead’s fancy. The second gen model boasts a posh-looking cabin that is tautly clinical and should be familiar enough to Audi aficionados. At first glance, the motorsports-inspired steering wheel seems fussy with the array of dynamic controls and fire-red starter button, but if this means keeping the cabin clutter free and having the important controls within easy reach, it easily resolves into form following function.

The great thing about the R8 Spyder is enjoying the soundtrack that comes along with unleashing the nat-asp V10’s five-hundred-odd charging horses, especially as you ride it to the redline.

The dual-clutch shifts of the S tronic are lightning quick and near-seamless, which translate to a blistering performance, but we feel it lacks that evocatively charged shift-recoil of the single-automated R tronic. The R tronic isn’t the quickest shifter on the block, but returns enough emotion in the 100m/s (in contrast, the Scuderia takes 60m/s) it takes to swop cogs for a dynamic feel, especially as the V10 is screaming to its redline. In city driving, it’s hard to beat silky slickness of the newer model’s dual-clutch shifts, because the GT’s R tronic requires finesse to drive smoothly, as well as an intimate understanding of its powerband and shift habits – in city driving, we found easing off between shifts returned better results than just keeping the gas pedal planted and praying for the best. Driven hard, the shift-shock adds rather than detracts from the GT’s experience, especially with the ragtop down and the occupants enveloped in a wall of glorious V10 sound. The new Spyder boasts angry, gnashy performance with plenty of snaps, crackles and pops on the overrun.

Although it is dynamically accomplished, it feels less edgy than its GT predecessor, the latter of which is a real livewire when you’re pressing hard, and delivers unabashedly un-quattro-like performance. The new model is fast and an eager enough beaver, so there’s ample engagement at all speeds, but at the end of it all, you don’t quite enjoy the sweaty-smiling, post-exertion euphoria that comes with a rewarding workout. However, one should bear in mind this isn’t intended to be a same type of hardcore machine as the GT, so it still panders to someone who expects the sensibilities of a daily-driver. The Audi R8 V10 Spyder ticks all the right performances boxes, but unfortunately sits in an unenviable position, because it is uncomfortably close to Lamborghini’s theatrical proposition from Sant’Agata, the Huracan, which incidentally saw the debut of the MSS modular-matrix platform on which the current R8 sits.

For what it’s worth, the Huracán Spyder starts at S$888k before COE and options for the rear-drive model, and the R8 Spyder, S$882k – albeit with COE – so whether the S$100+k gap is worth bridging to enter Lambo ownership will depend a lot on the ‘thinking person’ Audi feels the R8 appeals to, and don’t get us wrong, we do like the car. The first generation of Audi’s mid-engined, quattro-driven sportscar was launched ten years ago, but most crucially was available in the popular V8 – in addition to the V10 configuration (this second generation can only be enjoyed as a V10).

Naturally, the former outsold its bigger-hearted sibling in Singapore almost three-to-one (it’s been tough to get a global figure for this), but if you consider the two-year-sales head-start enjoyed by the V8, the breakdown is probably closer to two-to-one… optimistically speaking. With the current model, the fact that Audi has decided to concentrate on the V10 instead of its ‘volume’ seller boggles the mind – at the launch of the V10 plus Coupe, we’re told there’s less reason for a V8 with this Gen 2 R8 because the R8 has already proven itself and been properly accepted by the sportscar fraternity – now, you’ll have to decide if that’s hubris or confidence...

Like its GT predecessor, the current V10 Spyder is a cracking proposition in terms of both looks and drive, but you’ll need to rationalise the value proposition in your head to decide if this is a spider that will snare you in its web.