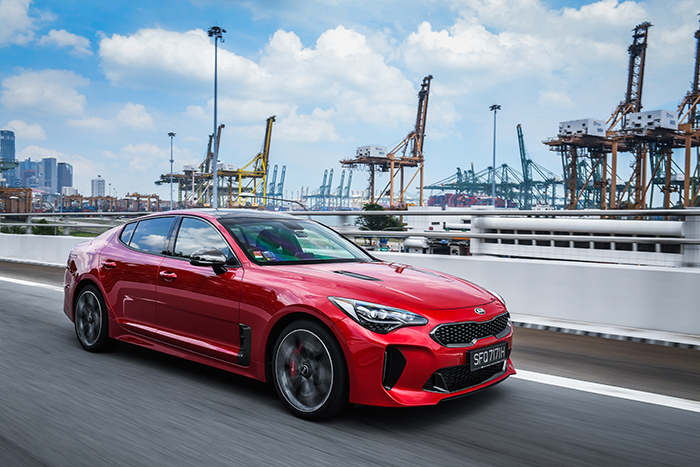 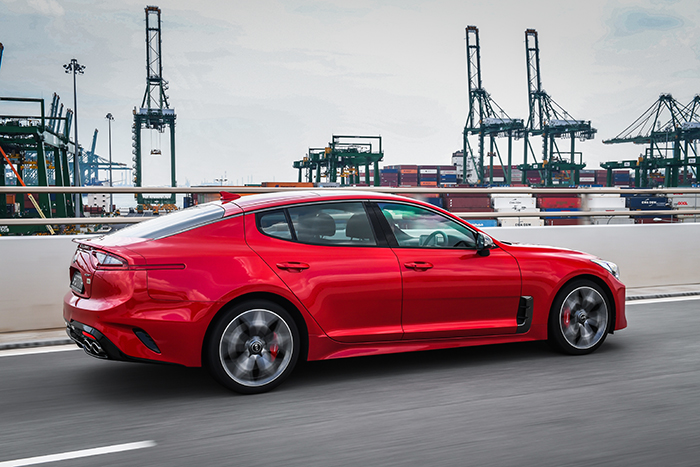 The Korean conglomerate has literally pinched top designers and engineers from premium German automakers in a bid to improve both the content and the image of their products, and they have been very successful.

The Ed reckons the Stinger 3.3 is the most enjoyable car he's driven this year so far...

Peter Schreyer of Audi was enticed to join Kia as Chief Design Officer of Kia in 2006. Under his watch, he transformed Kia vehicles from bland anonymous Korean cars to style leaders in their categories – in fact, the distinctive Kia corporate tiger-nose grille is his brainchild. In 2012, Schreyer was named one of three Presidents as well as Chief Design Officer of the whole Hyundai group. 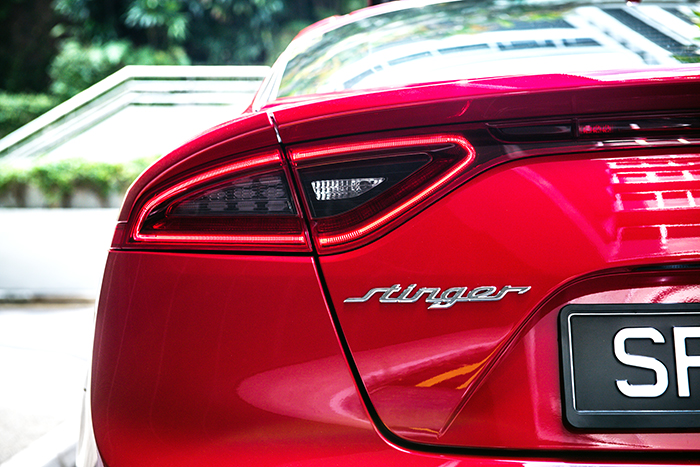 Another ex-Audi man to join him in 2006 was Gregory Guillaume, now Chief Designer at Kia Motors Europe. The two were tasked to bring the 2011 GT Concept to life as the Stinger. In one fell swoop, Kia had unleashed a production GT car whose design and performance can match any of Europe’s best.

The Stinger has an elegant flowing silhouette, as its rear-wheel drive layout with long hood and muscular haunches echo both the style and elegance of gran turismo legends with just the hint of a muscle car’s raw aggression. Piercing LED headlights flank the corporate tiger-nose grille, while huge vents below the lights cool the brakes, as well as add visual drama. 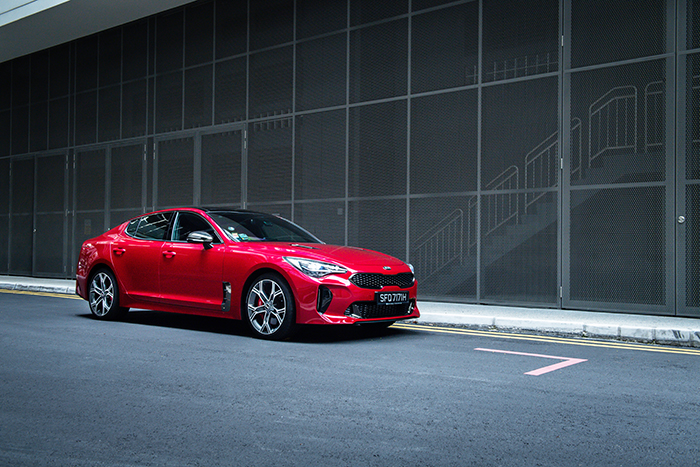 Dark chrome finishing for the wing mirrors add a touch of class and luxury. Complementing these mirrors are dark chrome trim and striking 19-inch wheels. Breathing vents behind the front wheels are a neat design touch that look great and also help suck the dirty and unstable curtain of air from the wheelhouse out in the back. 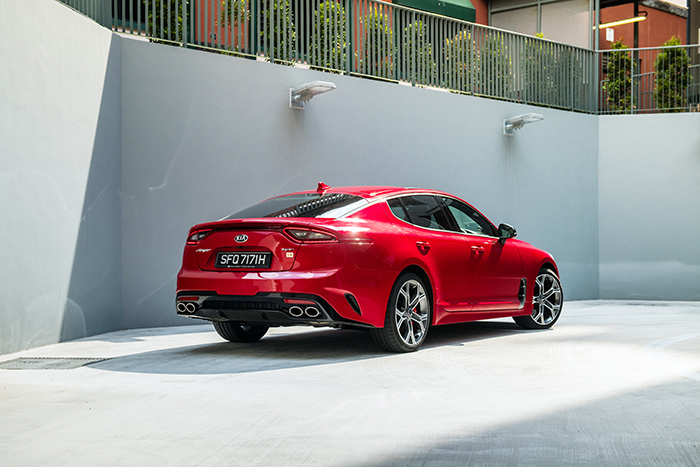 The Stinger’s rear view is no less dramatic. Quad oval exhausts blend perfectly into the integrated rear diffuser to accentuate its svelte looks as well as aerodynamic efficiency. In addition, a discreet boot lip spoiler and smooth underbody all help the Stinger achieve a very creditable drag coefficient of just 0.30 Cd. 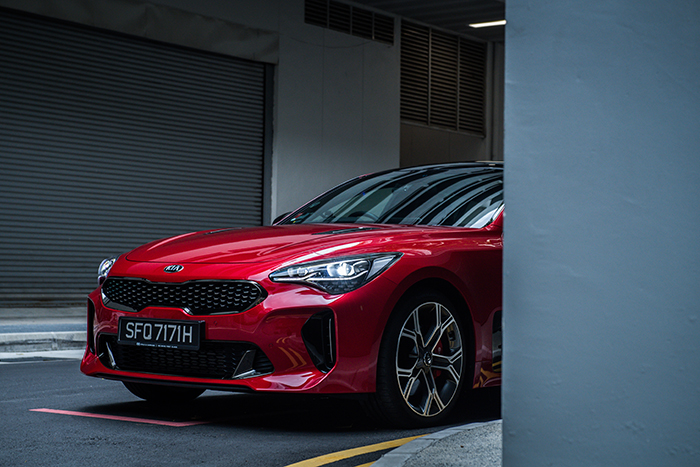 Without a doubt, the designers have created a fastback that is elegant, athletic and classy. However, petrolheads will appreciate that beauty is nothing without the performance to back it up. 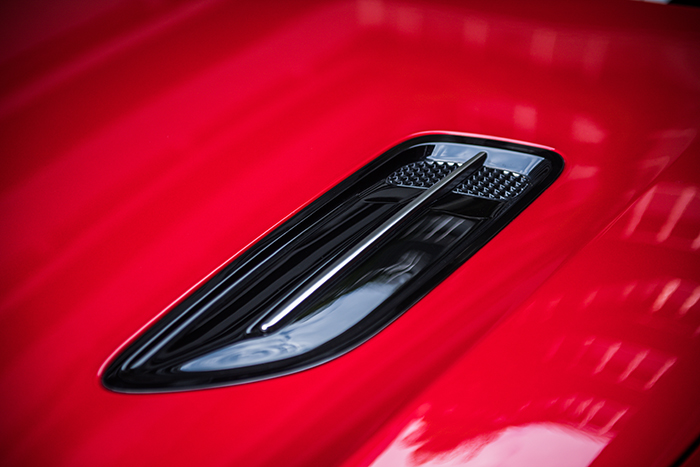 And who better to hone the dynamic aspects of the Stinger than Albert Bierman, former chief of engineering at BMW’s M Division. Currently Head of Vehicle Test and High Performance of the Hyundai group, he was tasked to make the Stinger drive the way it looks. 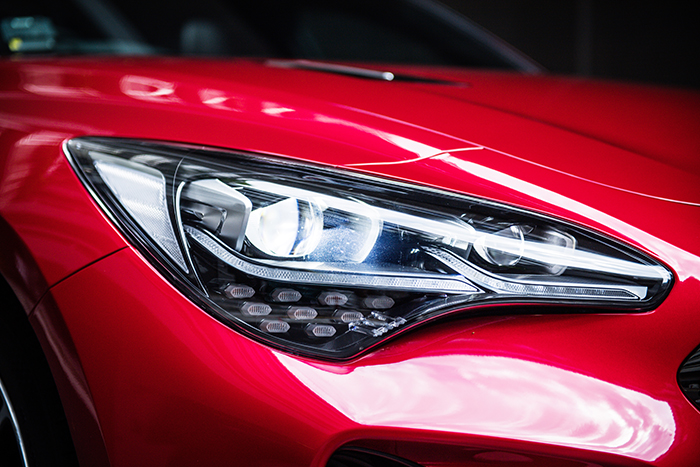 Bierman makes little pretense about the fact that the benchmark car for the Stinger GT is the BMW 440i. For starters, with a length and width of 4830mm and 1870mm respectively, the Kia is significantly longer and wider than its main rivals – the 440i and Audi S5 Sportback. And quite honestly, though some of the detailing may seem fussy, the Stinger has a more striking and charismatic presence than both the German rivals. 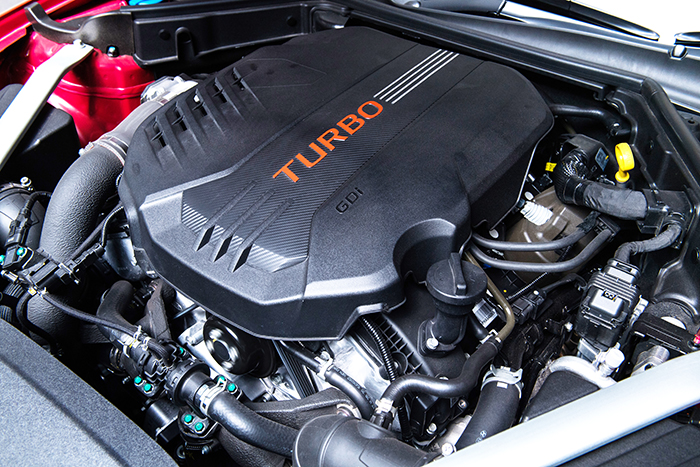 The GT is powered by the Lambda 3.3 T-GDI V6 engine developing a whopping 365bhp and devastating 510Nm of torque (from just 1300rpm!). Performance is truly exhilarating, not least with the added drama of rear wheel spin during fast take-offs and gear changes. Fact anoraks will like to know that the 0 to 100 km/h comes up in just 4.9secs and top speed is rated at 270km/h, but it is the fluid dynamic characteristics of the Stinger that turn it into a real star. Naturally, the bulk of the sales will be for the ‘regular’ GT Line variant: the 2.0-litre’s 240bhp and 353Nm ensure it is no sluggard, with the century sprint dispatched in 6.0 seconds and a top speed of 240km/h. However, it will be the 3.3 GT that will fly the Kia flag to proper petrolheads the world over. The cabin of the Stinger GT is no less emotive than the exterior. Low-slung but extremely supportive seats feature ultra-soft Nappa leather found only in the most evocative cars, while the four-way adjustable lumbar support and side bolsters ensure a snug fit for drivers of all sizes. The central console is neatly split into two specific areas. Infotainment controls sit between the eight-inch touchscreen above and the climate and ventilation buttons below; fortunately Kia has seen fit to have physical buttons for the latter.

There is nothing more irritating and distracting than having to go on-screen to search for submenus just to adjust something as basic as climate control, which unfortunately is the reality for many new cars with large touchscreens.

A useful bit of kit is the wireless phone charging pad in the centre console for compatible phones. Both variants also offer heads up display and sunroof as original equipment. Though low-slung, headroom is reasonably generous. A 2905 mm wheelbase means the Stinger thumps its immediate rivals for spaciousness. Rear legroom is generous and the cabin is wide enough to seat three abreast in the rear without the discomfort of unwanted overly close contact.

Kia’s ADAS (Advanced Driver Assistance System) includes Blind Spot Detection and Rear Cross Traffic Alert. If it senses a vehicle approaching too closely from either the right, left or rear, it will sound an audible warning that alerts without being too obnoxious.

Together with QuanturnLogic Surround Sound, the sound stage is multi-dimensional featuring clear and refined detail with no colouring or distortion. Besides providing music to satisfy audiophile ears, the Harmon-Kardon system also boasts Active Sound Design, which augments acceleration, shifting and suspension sounds for an enhanced driving experience and greater refinement. Like a lot of purposeful sportscars, the steering wheel is flat-bottomed like in motorsports, and fitted with the controls for audio, screen display and cruise control. The GT comes with variable ratio steering, which is extremely quick and responsive, as it delivers immediate turn-in and a good measure of feel and feedback.

This feedback is crucial in the 365bhp rear-driven Stinger. The GT is extremely agile, darting round corners with just a hint of oversteer; it is fun and involving, but novice drivers with no experience in skid control would be well advised to be wary, especially in the wet. Traction control allows a fair amount of leeway even with Comfort selected. This slight twitch adds to the overall sporty and fun nature of the car. Select Sport and the nanny effect is minimised, allowing the skilled driver to really exploit the car’s handling.

Sport + switches off traction control altogether and is not recommended unless you are certain of your capabilities as a driver. In this mode, the rear wheels spin easily when provoked and it is easy to provoke a fishtail under hard acceleration. As responsible drivers, we think that this extreme mode is best reserved for the race track.

Other modes include Comfort, Eco and Smart, but we left it in Sport for the most part since the Stinger GT proved to be a real driver’s car you need to drive before you diss it. However, if you’re in a bout of start-stop rush hour traffic, Comfort does well for overall commuting and Eco blunts the performance too much to bother with, since performance is the raison d’être for buying the 3.3 GT anyway. In truth, the difference in suspension and steering settings are not all that different between Comfort and Sport modes. Ride and damping is impressive for a performance-oriented car, with a suppleness over bumps and humps. It is a little firmish in Sport but body control is excellent and never jarring. Transmission duty is handled by an 8spd auto. The shifts are nicely slurred and gentle, perhaps a little too slurred, even in Sport or Sport +. It would be a lot more invigorating if gear changes could be a bit quicker. This is particularly apparent when fast approaching a corner and quick downshifts are necessary.

The 3.3-litre V6 of the GT is extremely refined. It revs freely and retains its composure even when revved to the redline. However, economy is not its strong suit. With a mix of city driving and open roads, fuel consumption would average around 13.7-14.7l/100km. With less exuberant driving, better economy would be achievable but most buyers of the GT are not likely to pussyfoot their cars!

Owners will find they need to refuel their GT quite often as the fuel tank is a rather miserly 60-litres. Boot capacity however, is a generous 406-litres, enough for two full sized golf bags or quite a bit of luggage. The rear ‘fastback’ hatch is electronically operated with automatic presets for different height requirements. The Stinger’s rear seats can be folded flat to increase luggage capacity. While the boot opening is wide, the lower lip is rather high, so care needs to be taken when loading heavy items. The launch of the Stinger has certainly raised the profile and image of Kia by several notches. This halo model is sporty and exciting without compromising on refinement, comfort and luxury. No rival in this price range comes close to offering similar levels of dynamic performance and a sophisticated street presence.