Take a look inside McLaren's upcoming three-seat hypercar: the BP23* 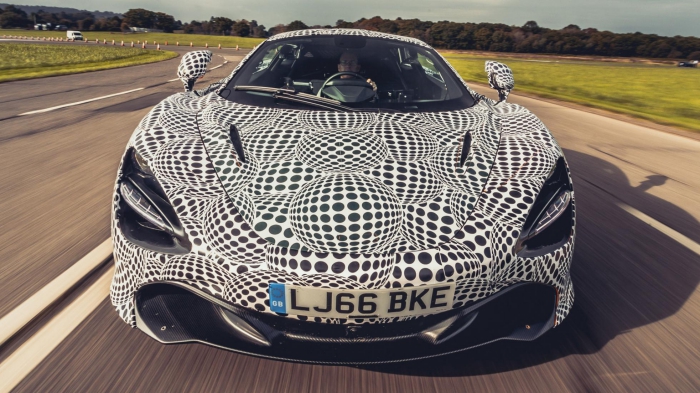 Look closely at this McLaren 720S. Notice something unusual? That’s right, it has a central driving position. You know what this means – it’s a mule of the BP23 hyper GT. 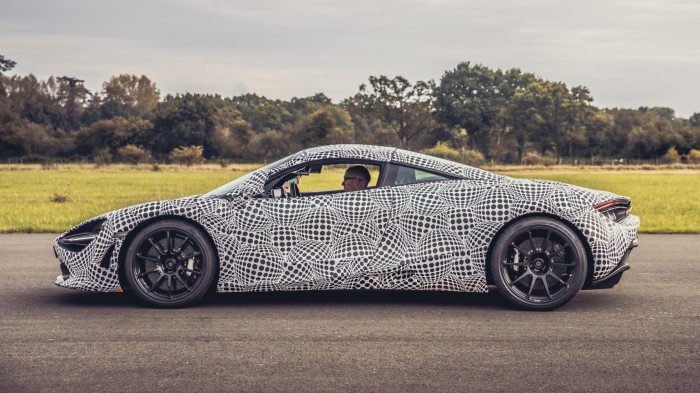 Now don’t get too excited and assume I’ve driven a disguised BP23. I haven’t. I’ve driven a 720S with the steering wheel in the wrong place.

First deliveries of the BP23, the fastest, most powerful and most aerodynamic road-going McLaren ever, won’t take place until late 2019, and the theme of the interior was only finalised a few months ago.

This car has been on the road just a couple of weeks. In fact, it’s the very first mule of the BP23 McLaren has built – powertrain prototypes won’t commence testing until later this year. 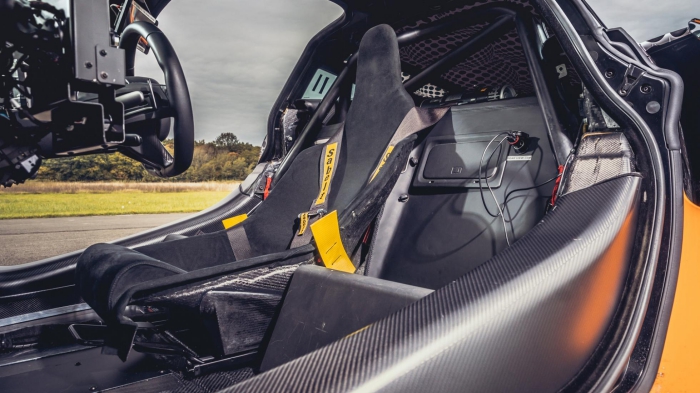 You don’t need me to tell you that shuffling the driver into the centre of the car is a tricky job. McLaren had to modify the Monocage II carbon tub, as the central spine of the standard 720S carries the coolant pipes and wiring. They now have a flat floor all the way across.

The BP23 itself will use a bespoke, albeit similar, version of this carbon structure, but McLaren is coy about giving away many details at present.

We know it’ll be hybrid, aimed more at road than track, have a slippery body and be McLaren’s most powerful and fastest car ever – but they haven’t defined that explicitly. 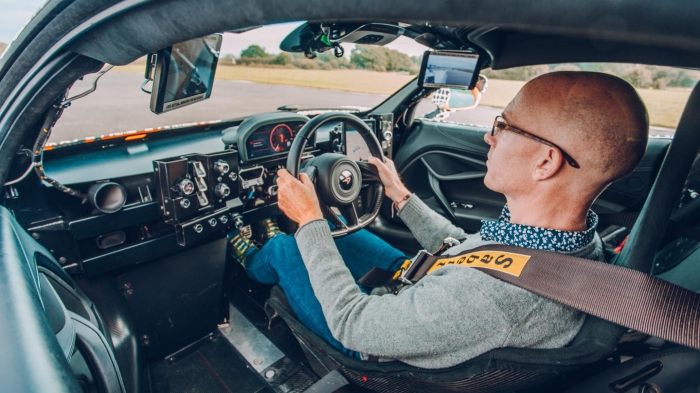 The comparison and relation to the McLaren F1 is unavoidable. That car had the same three-seat layout – centre forward and two flankers to convolute a couple of sports references – but also put the driver between two semi-structural spines (gearlever on the right, handbrake on the left) that carried many functions and were a pain to negotiate. The plan is for the BP23 to be easier to use. Faster, too? I’ll come back to that later.

So what job is this prototype doing? Here’s vehicle line director for McLaren’s Ultimate Series, Andy Palmer: “We’ve done a lot of work around CAD and ergonomics before we even think about building a prototype. At this stage essentially we’re looking at ergonomics, layout of controls, visibility, access, packaging, the rear view mirrors, but also where you put the vents, what storage we can have and so on.” 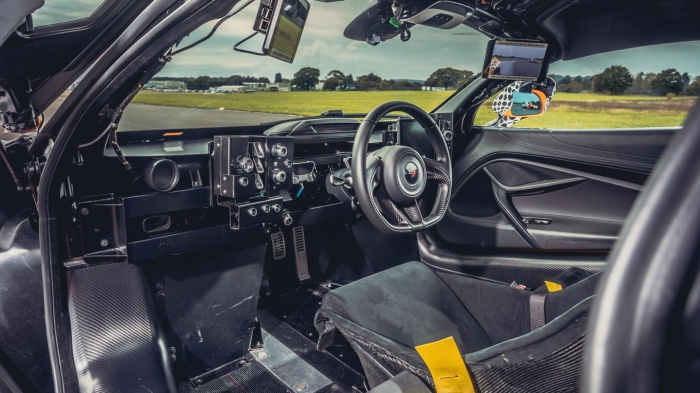 I peer inside. The seat looks familiar. “We found an original touring seat from a McLaren F1, scanned it, got it made up, put on foams and trimmed it”, Andy tells me. “It’s not what we’re going to run with – I think it’s likely we’ll do individual seat fittings for owners, but its position in the car is right”. I have a few stabs at getting in. This is a critical area, and possibly the most challenging aspect of owning the car for many buyers.

Chief test driver Chris Goodwin tells me that when he was racing the F1 at Le Mans, fellow driver JJ Lehto, an ex-gymnast, used to be able to fling himself straight into the car in one movement, legs into footwell, backside into seat.

Given this is a hyper GT, I’m going for something a little more dignified. “We’ve got a buck and we’ve had people get in so many different ways,” Andy says, “sitting in then swinging their legs around, going in head first…” My technique is to settle on the lip of the outer seat, and then using the door aperture for lift and leverage, post myself across and forwards. The open floor gives you footspace, but it still takes me half a dozen attempts before I reckon I’m happy with a technique.

And once settled in the seat I can only barely reach to pull the door down. I reckon the production BP23 (it stands for Bespoke Prototype 2, with 3 seats. BP1 was the 12C-based McLaren X-1) is likely to have electric doors. 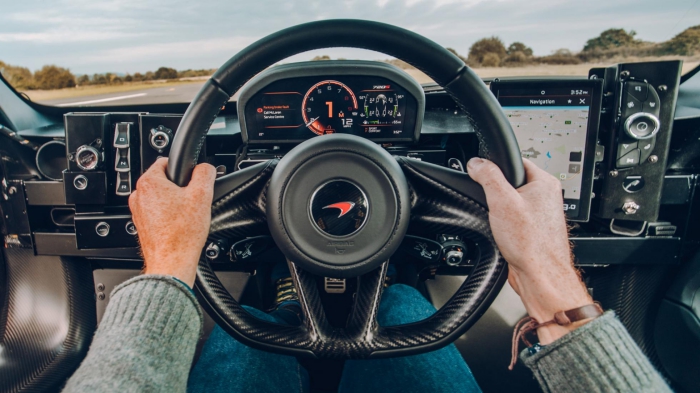 The feeling once you’re in is utterly different to a 720S. Leaving aside the butchered instruments and skeletal layout, the first thing that strikes you is the symmetry, with the steering wheel as the focal point of everything, then, perhaps oddly, it’s the shape of the side windows.

Here, instead of feeling like you have three separate outward aspects (windscreen and side windows) it feels like one panoramic view. I find myself wondering about sun visors, seatbelts and cupholders…

“We will have two cupholders, and three inertia reel seatbelts”, Palmer says. Mounted on top of each side mirror are extra housings containing rear -view cameras – it’s a solution that would reduce drag and improve side visibility.

The original F1 prototype had mirrors mounted high up on the A-pillars, so I wouldn’t be surprised if BP23 went for a similar arrangement. Palmer expects they’ll end up mounting the internal screens lower. It’s amazing how quickly you adapt to the central position. Ten minutes of crawling around the perimeter roads and car parks of Dunsfold’s industrial park and I’m happy.

Initially you do keep having to correct your road position and remind yourself to stay central in the lane or you find yourself subconsciously drifting right to line yourself up in the normal place. Similarly you find yourself giving a wide berth to kerbs at junctions as you get used to the sensation.

But then it feels so natural, a far better place to experience the movements and sensation that driving delivers.

I’ve never driven a McLaren F1, so the only similar thing I’ve got to compare it to is a BAC Mono. Like that, this comes across as a pure and dedicated driving machine because it literally puts the driver front and centre. I barely even noticed the infotainment screen – it feels less of a distraction when your eye is drawn more to a focal point outside.

And that’s it, as the driver you feel you’re the focus of the car, at the point of things. It’s by no means perfect just yet – you really notice the pedal offset when everything else is so in-line, and the windscreen still has all the sensors centre-top.

The plan is to keep all buttons off the steering wheel, to minimise distraction and concentrate on the driving. I think it’s going to be superb, the sensation of being sat centrally when however much horsepower kicks you into hyperspace. £2m well spent for the 106 owners. McLaren won’t talk tech, so let’s go for a bit of speculation. It’s a GT, so I don’t think McLaren will be too precious about retaining rear-wheel drive.

So I’d have a pair of e-motors up front and internal combustion at the back, perhaps aided by a third motor for torque fill duties. This arrangement is common enough – the Honda NSX uses it, the Porsche 918 and BMW i8 aren’t dissimilar either. 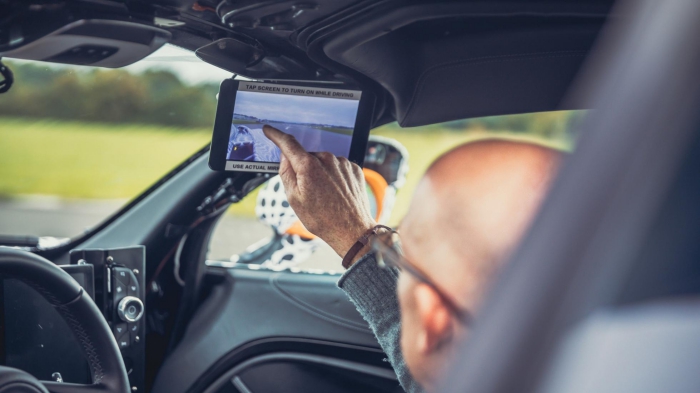 Still a twin-turbo V8? I’d love to say it’ll have a bespoke V12 a la F1, but given the maximum possible income this project can generate, I’d expect it to run a very trick version of the V8, perhaps larger capacity and maybe about 850bhp – when the P1 came out its 737bhp V8 output was around 150bhp up on the 12C, so why not similar gains over a 720S this time round? That should also make it the fastest McLaren off the line ever – and probably over all increments up to and beyond 320km/h.

But how far will McLaren go with son-of-F1? All the way to 386km/h? Beyond? Palmer was interesting on this. They’ll be working with Pirelli as sole tyre supplier and according to Palmer, “we need to balance top speed against driver comfort”.

Above 349km/h, the tyre sidewalls have to be so stiff you risk compromising BP23’s luxury and comfort aspects.

I don’t think they’re off to chase Bugatti – that’s a dead-end street with a Chiron-sized road block in it. But surely 386km/h must be tempting. So maybe one of the options might be a high-speed pack with different wheels/tyres and a 402km/h top end? The rumour mill suggests McLaren’s Vision Gran Turismo is a digital BP23 in all but name, but aside from big numbers I can’t see any relationship.

BP23’s stated aim, according to Andy Palmer, is “to carry three people a long way with luggage and in luxury”. The ultimate continent crusher, so much as that role exists any more.

Will you be able to drive it purely on electric? Will it be plug-in or induction charged? McLaren won’t be drawn on battery tech, nor even on how the luggage is going to be stowed.

Let’s hope for F1-style side pods. When will we see it for the first time? I’d anticipate late next year. In the meantime keep your eyes peeled – the majority of BP23 development is taking place on public roads.

Next time you see a camo-clad supercar, have a look at where the driver is sat…