This is the 400km/h McLaren Speedtail 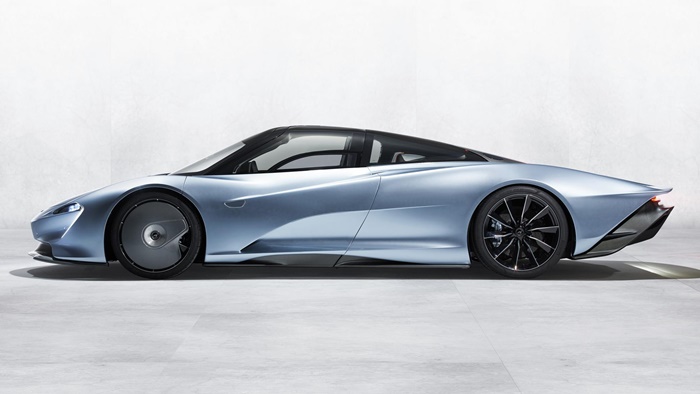 Sleek, isn’t it? Long and low and lean and, well, sleek. A streamliner. This is it, the McLaren Speedtail, the car formerly known as BP23 and likely forever known as the spiritual successor to the F1. Three seats, stratospheric top speed and a price tag that’s similarly out of this world.

Facts, though, have been in short supply. And when we’re starved of facts, we feed off myths. The rumour mill spooled up with tales of a 480km/h target, of Chiron-beating power, and, to be fair, all we did was fan the flames. 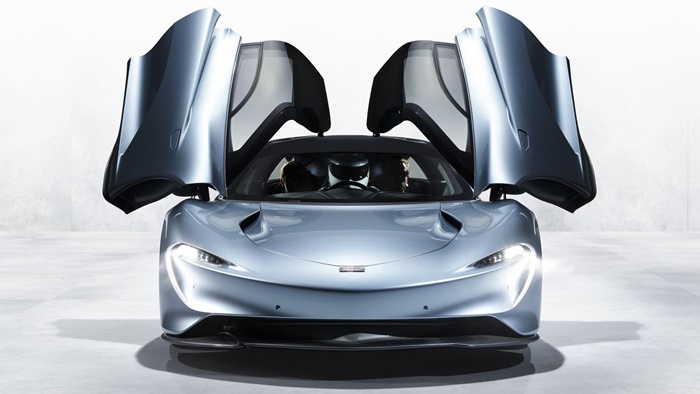 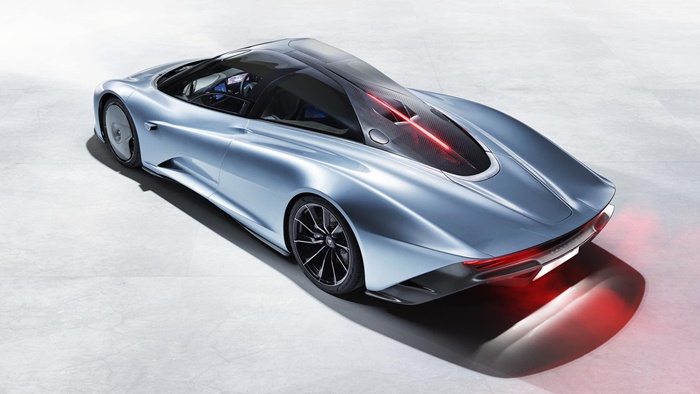 Let’s rein in hyperbole and exaggeration right now, because here’s what we do know. The McLaren Speedtail will, when deliveries start in early 2020, have cost each of its 106 owners north of £2.1m for a car that boasts 1,050hp and a 400km/h maximum speed.

When they do strap themselves into the centre seat, line up on a runway, press the Velocity button above their head and nail the throttle, they’ll feel what it’s like to accelerate from zero to 300km/h in the same time it takes a diesel supermini to hit 100km/h. 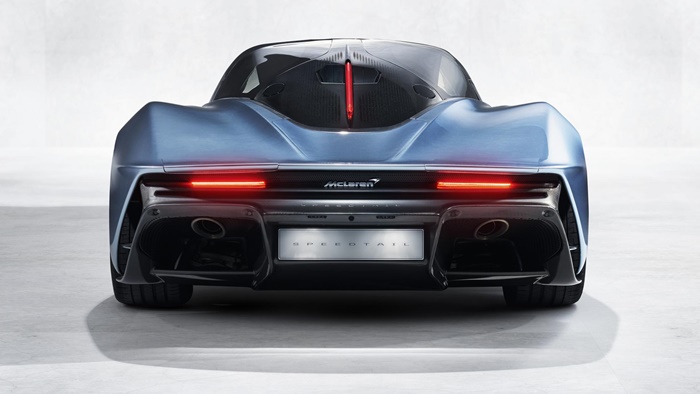 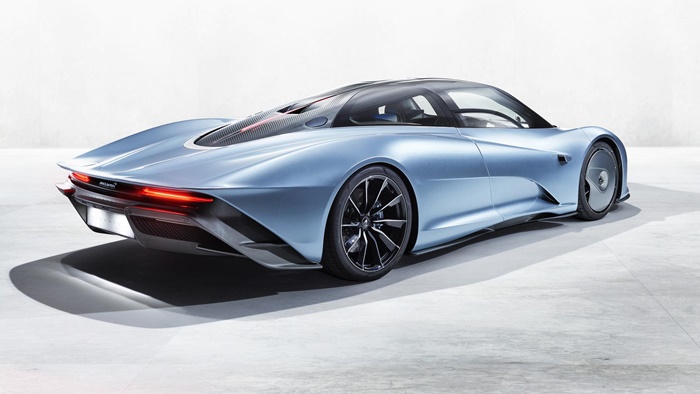 How is it powered? That still hasn’t been fully revealed, but let’s start by looking at a broader picture. McLaren likes its Ultimate Series cars to answer questions. Take the Senna, which answers “is it possible to road-legalise racing levels of downforce?”

Turns out it is, and nothing else comes close to the 800kg of downward pressure the Senna is able to produce at 240km/h. Now we’re in the realm of “What if we forgot about downforce and went low-drag instead? Say grand touring was still a thing, what would the ultimate 21st-century GT car look like? What would it be able to do?” 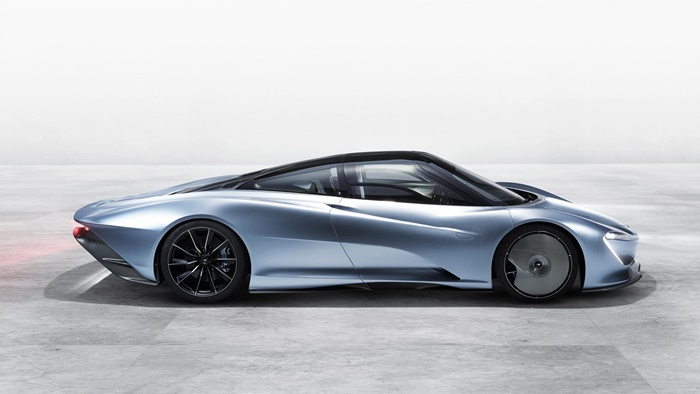 We’ll come on to talk about the clean lines of the cabin, the tactility of the materials, but first just look at it: the length of the tail, the elegance of those rear lines. It’s plain stunning, a shape that treats the air passing over and around it with respect.

What air it needs is subtly taken, used as appropriate for combustion or cooling and then calmly reintroduced, before being precisely and delicately detached by the samurai blade tail.

At 5.13 metres long, it’s 60cm longer than a Chiron, the sweeping carbon cape carrying with it a suggestion of art deco/steampunk Thirties cool. The kind of car the Rocketeer would have driven. 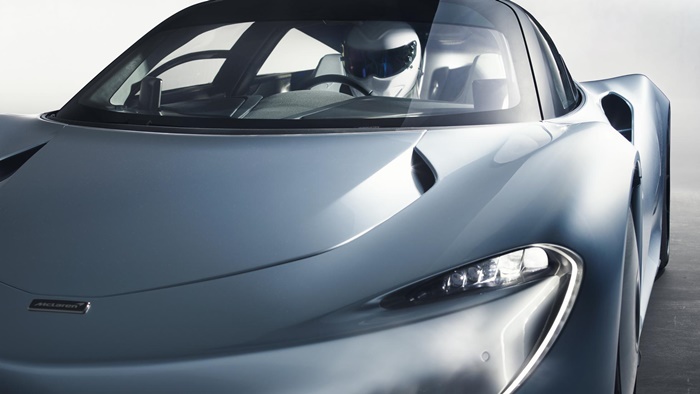 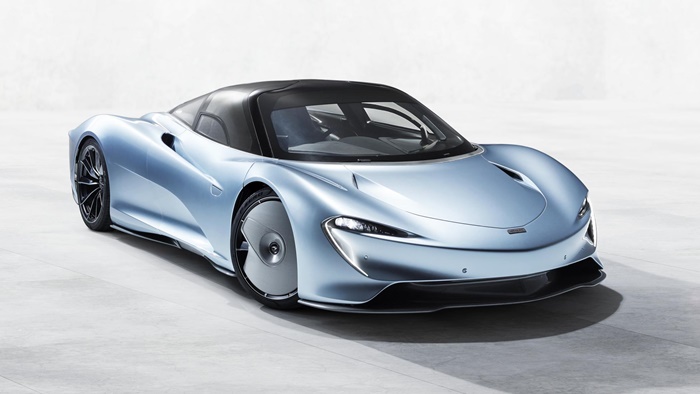 That’s the back, at least. The front is more challenging. What initially springs to my mind are mid-Eighties concept cars, stuff such as the MG EX-E, the Lotus Etna. Think it’s something to do with the wheelspats and low, low nose.

The more I look, the better it gets, though, and I really admire how the intakes and air channels have been hidden away.

Still at this end of the car engineering is more important than aesthetics. Design chief Rob Melville describes it as a “comet, with the mass at the front, then this long tail”. He’s also interesting about the wheelspats: “Without them, the car would not have been able to deliver on its top speed and acceleration parameters.” The spats (which remain static as the wheel rotates) reduce turbulence almost entirely, the air allowed only to escape from the wheelarch through a single notch, smoothing flow.

They can be removed, but McLaren suggests you don’t. Just think of the brake dust build-up. And did you notice? No exterior mirrors. Instead, pop-out cameras with screens at the base of the A-pillars. 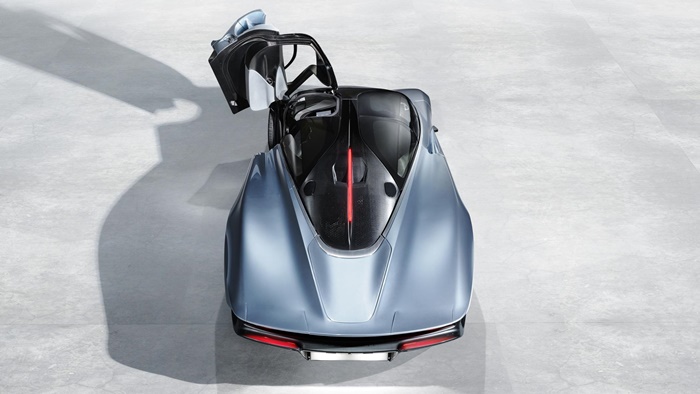 I don’t think I’ve seen a smoother transition from window into roofline – there’s no header rail, nothing to delay the air’s passage. And how about the cuts at the back of the rear deck?

Flexible carbonfibre, moved by hydraulic actuators to adjust the centre of pressure or aid braking stability. We must assume that somewhere in Woking that vast one-piece clamshell is undergoing not just air-proofing, but child-proofing, being continuously flexed, bent and pressurised so that the Speedtail can resist the challenges of Casino Square.

Which, let’s face it, is a likely destination. Let’s just hope it’s been able to use a decent proportion of that 1,050hp on the way there. No word yet on how that’s balanced between combustion engine and e-motor(s), but let’s guess 750hp from the familiar 4.0-litre twin turbo V8 and 300hp of electric. There’s a conventional battery pack, but no plug-in socket. Instead, inductive charging. Rumour is it won’t run on electric alone. Shame. If true, this hybrid will have regressed from the P1. Will electricity still be helping out at high speed? Is there a clever gearing system to allow that? We just don’t know, beyond realising that the 1,430kg dry weight (the P1 was 1,395kg) means the battery pack can’t be that big.

There are a couple of elephants in the room. Anyone else slightly underwhelmed by the stats? Only 11lm/h faster than the 25-year old F1, likely no more e-power than the Porsche 918 Spyder, a mere 1,050hp total when Koenigsegg’s Agera RS has a full megawatt (1,360hp), and the Chiron has 1,500hp. And 1,650hp seems the entry point if you want to talk 480km/h. 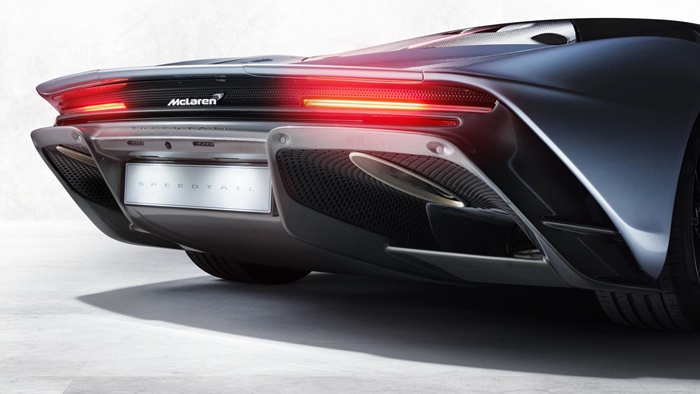 The only stat available so far is 0–300km/h in 12.8secs. Bugatti’s time is 13.1secs (the Bug might have a hefty power advantage, but it’s also getting on for 600kg heavier – the two have near-identical power-to-weight ratios of around 740hp per tonne).

Nothing in it really, but McLaren has confirmed the Speedtail is rear-drive only. It’ll be doing well to match the Bug’s 2.4-sec 0–100km/h time, but might just have caught up by 161km/h (4.7secs). Mad enough, however you measure.

But maybe that’s the point. McLaren isn’t talking 480km/h, because the faster you want to go, the more you have to compromise – stiffer tyre sidewalls are just the beginning.

Going back to first principles, McLaren wants the Speedtail to answer the hyper-GT question, not simply battle for bigger numbers. Seen from that point of view, it’s hard to conclude that 400km/h isn’t ludicrously adequate. So 400km/h it is, reached very quickly. We can also assume McLaren is focusing on high-speed stability as a core facet, to make distance relaxing and undemanding. Wind and tyre noise will need to be minimised – in that respect, it’s encouraging that the front tyres are modest 235-section, that there’s nothing to snag the air passing over the canopy.

I suspect it’ll have a massive fuel tank (“more than 60 litres” is all Ultimate Series line director Andy Palmer would admit). Even so, it ought to be an efficient car.

Comparing and contrasting the Speedtail is all well and good, but its USP isn’t speed, but seating. This time last year, I drove a central-seat 720S. I found it captivating, almost instantly a more logical, sensible place to sit in the car, distanced from both A-pillars, the symmetry of the view out an utter joy.

The catch is getting in. Various techniques are available; none is elegant. Or quick. All involve a measure of shuffling and skooching. I do like the fact McLaren has incorporated recessed handles in the headlining, and engineered “directional leather” that aids sliding in, then “subtly holds the occupant in place while they drive”. This was necessary because the central seat couldn’t have high bolsters. You do miss them.

If you want to feel wedged in, drop back into one of the flanking chairs. Here, tucked behind B-pillar, shoulder overlapped with the driver, you are genuinely hemmed in. It’s comfortable but restrictive.

You can’t be big. The view out, however, is, like the driver’s, unique. It’s a special place to sit, and you’re aware of views in interesting directions, of the amount of light, of angles you’ve never seen before in a car. It’s not social, though, doesn’t treat passengers as equals. The centre seat makes the Speedtail egocentric. The symmetry is emphasised by how much it’s been decluttered. No sun visors; instead, the Speedtail is fitted with electrochromic glass which darkens at the press of a button. The LED interior lights have been incorporated into the glass, too.

Your eye has less to fall on, and the clean view across the swathe of screen and air vent, mirrored either side, channels you into focusing on the steering wheel, finished in this glorious wood-like machined carbon.

That material, super-tactile, carved from billet carbon where each layer is just 30 microns thick, is used for the paddles too, and forms the binnacle around the porthole above your head. That’s where you find the car controls, buttons for gearlever, start/stop and switchable dynamic modes. The most interesting one is labelled Velocity.

This prepares the Speedtail for high speeds. “No extra key or anything,” Palmer tells me, “this will do 400km/h straight out of the box.” It lowers, the active aero is optimised and the wing cameras fold away. Whether this makes it an illegal mode on the road, like the P1’s track mode, McLaren has yet to admit.

The doors operate electrically, there are stowage drawers underneath the outer seats, load bays at either end (162 litres in total, fitted luggage matched to the interior specification is optional) but no lockers in the flanks à la F1… more’s the pity. Cupholders? Those are on the options list, I’m told.

But it’s not just the tech and layout that separates the Speedtail from lesser McLarens – it’s the design and quality. So here we have Scandanavian leather where air is infused beneath the surface during manufacturing, to reduce density and cut weight by 30 per cent. It’s still tough enough that, with stippling to aid grip, McLaren has used it in place of carpet on the floor.

Then there’s Titanium Deposition Carbon Fibre (I’m sure it’s scientifically accurate McLaren, but you shouldn’t put scientists in charge of naming it as well as creating it). Carbo-tanium gets around the issue of coloured carbonfibre, which can, apparently, compromise the material’s structural integrity.

Here, a micron-thin titanium layer is fused onto the carbon weave. McLaren has left the finish natural on this Speedtail, but the titanium can be anodised in any colour – you could even have images and words placed into the carbon. McLaren pioneered carbonfibre. Now it’s taking it to the next level.

The mind boggles. I suspect it’ll do so again when more details are released. But for now, while we’re still short of full fact disclosure, I recommend just gawping at the thing, and realising that one day quite soon, 106 of them will be released into the wild.