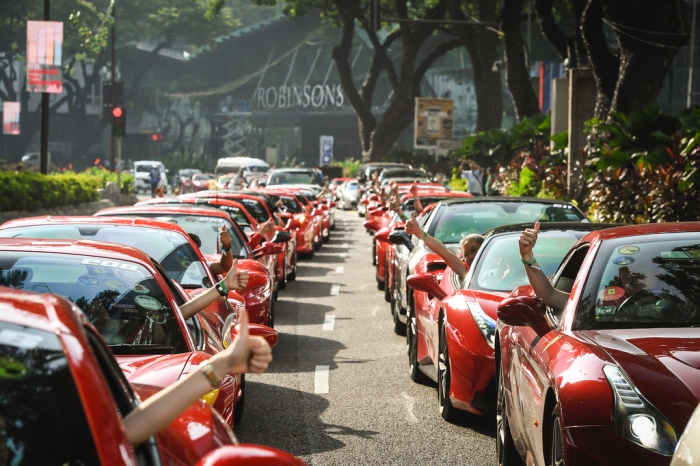 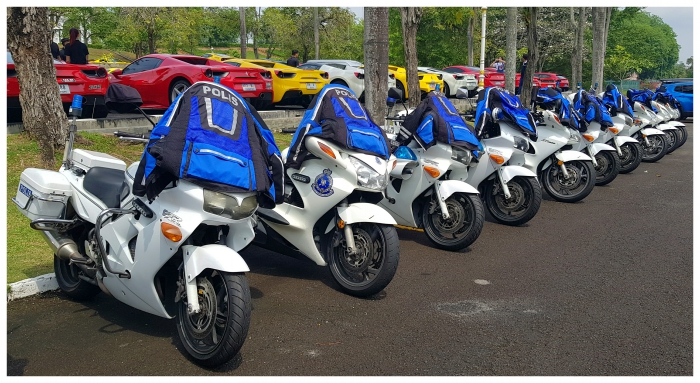 ...but then again, it could be the troop of clinically efficient police outrider escorts accompanying our convoy - and stopping traffic when needed - through both rain and shine. 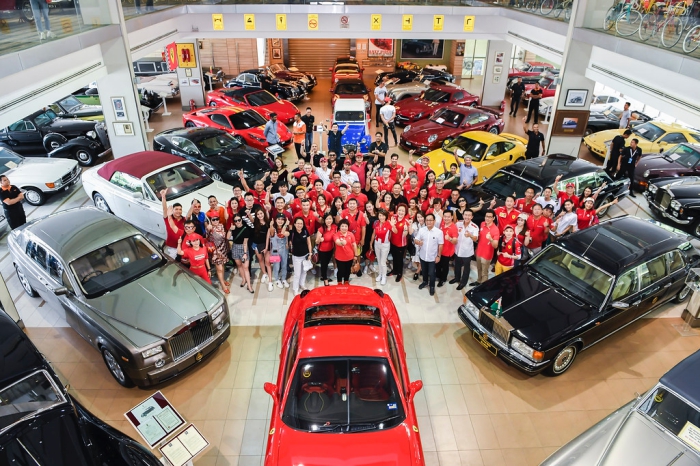 (The Royal Automobile Gallery at the Istana Alam Shah)

Thanks to the outriders' tireless efforts, our passage from the Four Seasons Hotel in downtown Kuala Lumpur to the Istana Alam Shah in Klang some 40km away was unimpeded, and we made it in good time to the Royal Automobile Gallery at the Istana, with ample time to pad our bellies with a mid-morning snack to boot. 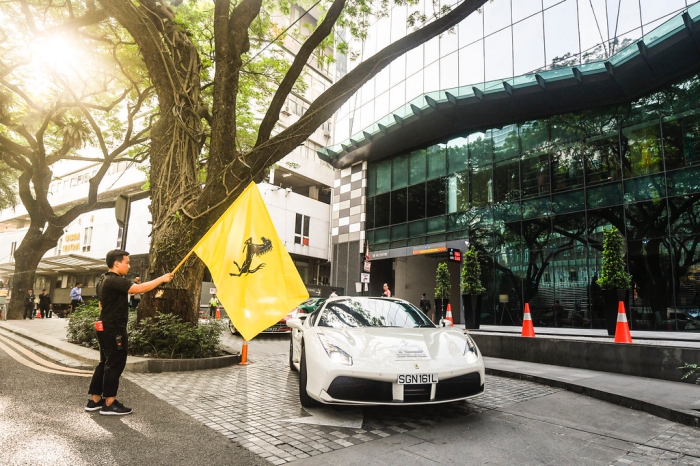 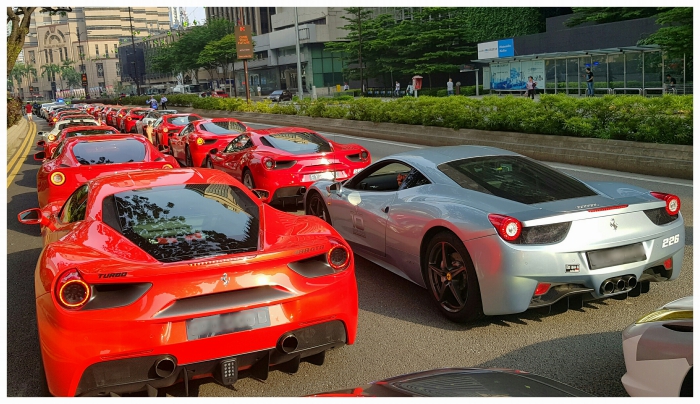 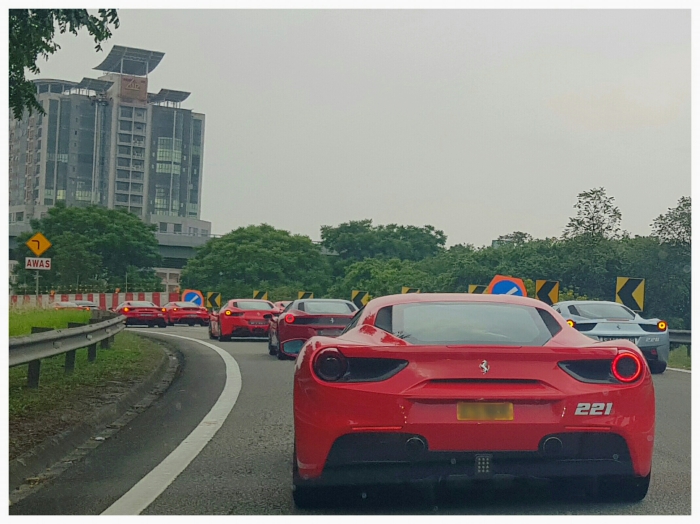 If you’re familiar with the traffic around KL on a Saturday late morning, our dispensation is one of those rare occurrences and a stupendous sight to behold, as the passage of our 27 Singapore-registered Prancing Horses out of central KL flowed swiftly and relentlessly like a scarlet river all the way to the palace.

(Ferrari is no stranger to celebratory parades... click HERE to read about the brand's 70th Anniversary Parade in Singapore) 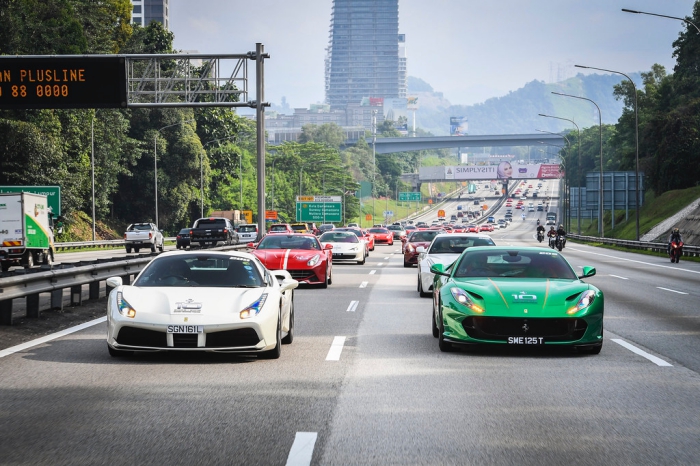 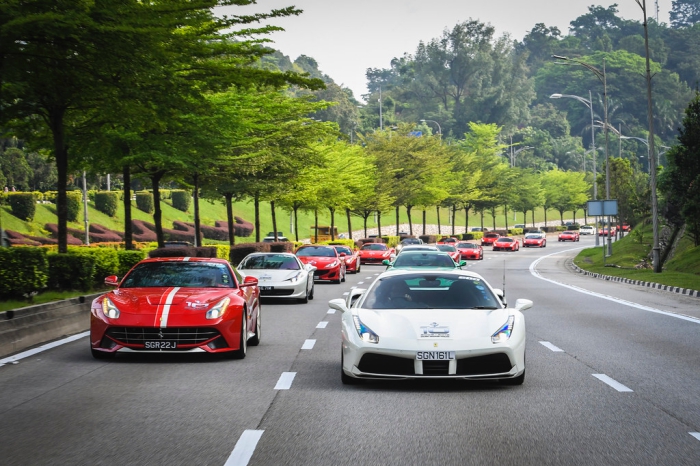 (The Singapore contingent at the Istana Alam Shah)

The convoys to the Istana Alam Shah were staggered, and the 22-car contingent from Thailand would trace that same route 30mins after the Singapore group left the hotel, so passionate tifosi who missed the first wave of Singapore cars had a second shot at capturing a roving, rolling wave of automotive art and sound with the Thai group on the move. Alternatively, bystanders 'in-the-know' on the look-out for local talent would have camped out near Naza Italia's Ferrari showroom, because that was the staging point for the 68-strong Malaysian contingent, which also included a handful of Hong Kong-registered cars that were in town for a drive with the Malaysian crew the previous week. What were we doing in Malaysia you ask? This wasn’t a regular convoy drive, but a veritable tripartite rolling parade of Ferrari's pomp and pageantry. Contingents from Malaysia, Thailand and Singapore gathered in Kuala Lumpur to celebrate each respective distributor’s tenth anniversary, as well as catch a sneak peek at the successor to the 488 GTB, the F8 Tributo, which was unveiled with flash and fanfare at the gala dinner.

(Click HERE to read about our F8 Tributo drive) The weekend in question was significant, and not just because of the Good Friday break.

A round of Ferrari Challenge was in session at the Sepang Circuit, which also gave us a small window in which to take the Ferrari road-cars that we'd driven up in out on track at night.

(Picking up our fave Shooting Brake, the GTC4Lusso, from Ital Auto, the Ferrari distributor in Singapore)
Thanks to the lure of the open track session, a trio of us media hacks had commandeered a GTC4Lusso for the weekend, in proper V12 guise naturally. The GTC4Lusso 'shooting brake' is known for its 2+2 touring abilities, and to put money where my (big) mouth is, I ‘voluntarily’ relegated myself to the plumply-padded rear seat for a large part of the journey into KL. The eight hour trip (with two pit-stops and holiday traffic madness) in the GTC4Lusso from Singapore to the Four Seasons Hotel proved less arduous than it sounds, largely because the Ferrari’s cabin is surprisingly comfortable - far more so than languishing in a cramped economy-class seat for the same duration of time, for example.

We arrived in KL hungry, but none the worse for the wear thanks to the supple ride and snarling V12-engined GT’s effortless pace in dispatching the highway miles when the roads opened up. (The Thai contingent's staging area at the Sepang Circuit)

With three drivers in rotation for the GTC4Lusso over the 30-minute track session, the time spent clearing immigration on the way up was longer than our time on the circuit!

However, the evocative wall of sound from the nat-asp V12 as you open it up on track quickly banishes any dark clouds, as the music of Ferrari’s V12 has to be God’s own soundtrack for the Armageddon.

It’s staggering how something engineered to be practical is capable of such handling finesse and boasts such dynamic nuances, and this is exactly where the pedigreed breeding of every Ferrari thoroughbred shines through. Of course, we had to top-off the weekend with an all-rounded immersion into Ferrari’s road and race cars.

To experience the motorsport end of the brand’s performance spectrum, we’re squeezed into the ‘hot-seat’ of a 488 Challenge race-car for a ‘hot-lap’ to experience the track at neck-straining gs, which sent plenty of blood rushing to the head as the Challenge pilota gave us a new appreciation of the term ‘lap-dance’!

As far as endings go, it's hard to imagine a happier one than this... (Gratuitous Ferrari shot... like we ever need a reason for one!)