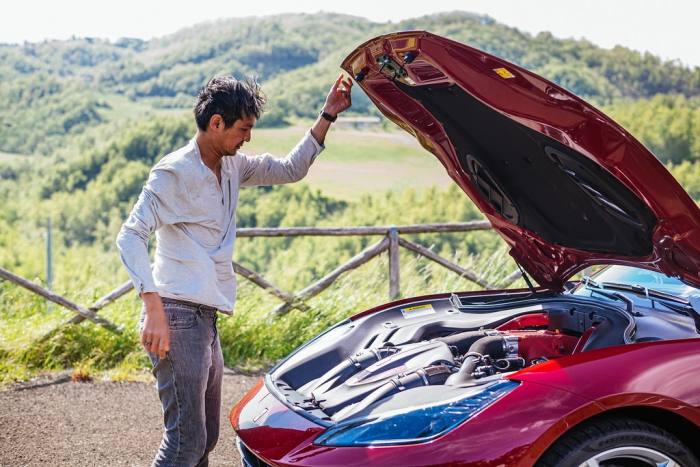 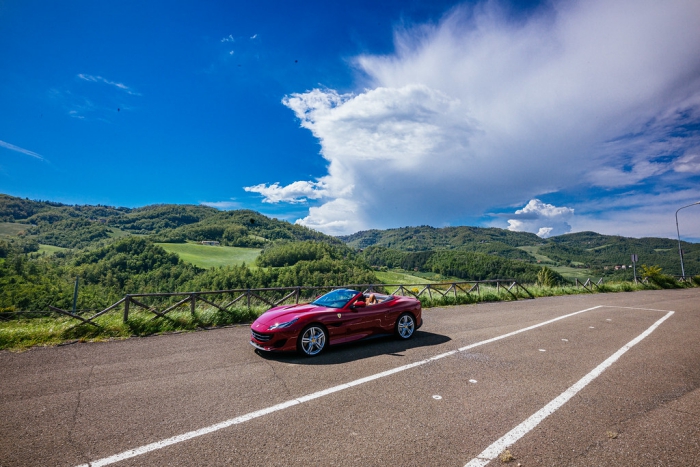 Maranello, Italy - Cruising down the autostrada outside of Maranello at just a whisker above the legal speed limit of 130km/h, the Portofino is displaying all the correct grand touring qualities. 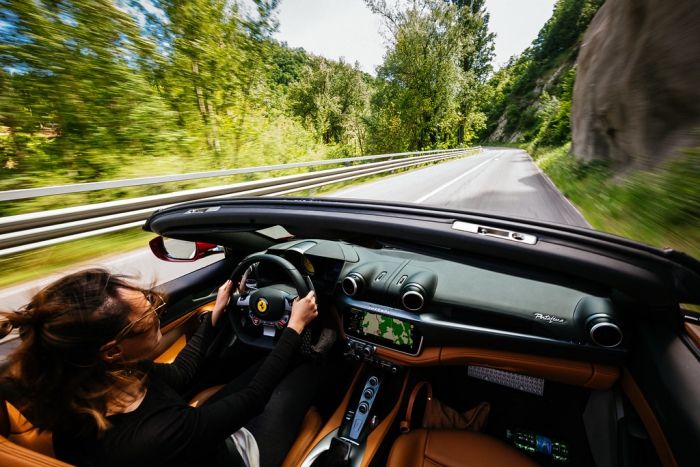 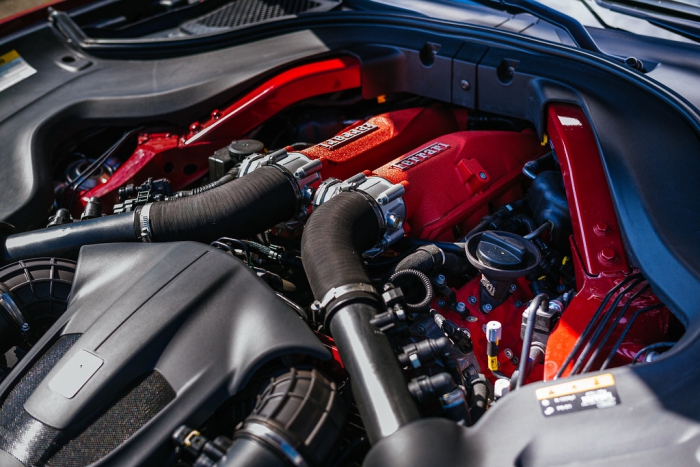 The ride is composed - the magnetic dampers do a good job of smoothing out surface imperfections - there’s hardly any wind noise, and the 3.9-litre turbocharged V8 is waffling along at just a tick under 3000rpm in seventh gear. 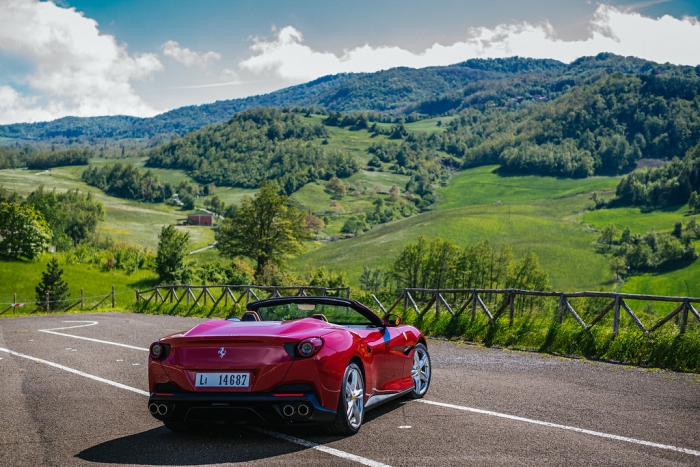 We see our exit coming up in 1km, which gives us the green light to put the hammer down. For the uninitiated, gantry mounted traffic cameras snap a picture of your license plate and some distance down the road, another camera does the same and computes your average speed. So squirt in spurts is the name of the game here. 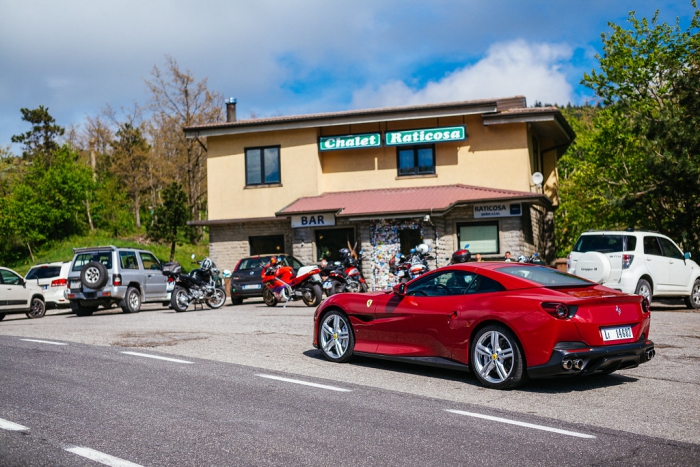 We take the exit for Monghidoro, a little town sitting at the foothills of The Alpe which rises to over 4000ft above sea level. The annual Mille Miglia just ended three days ago and road tulips for the legendary race still dot the countryside.

Hit the button to engage the retractable hard-top and in just 14secs, the Portofino goes from GT cruiser to glam roadster. 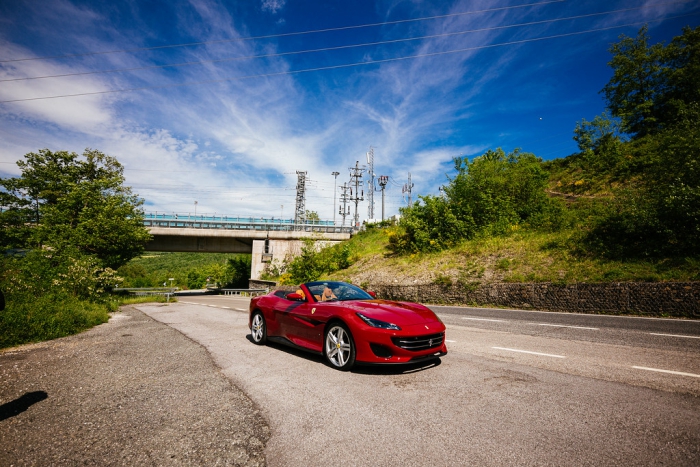 While our test-car in Rosso Mugello looks good with the top on, it looks even better with the top off. Think of Vanessa Hessler with her bikini top on and… well, you get the drift. The designers and engineers have got it spot on with the Portofino. Making a convertible look good with its top-down is mandatory, but the Portofino looks just as good as a berlinetta. 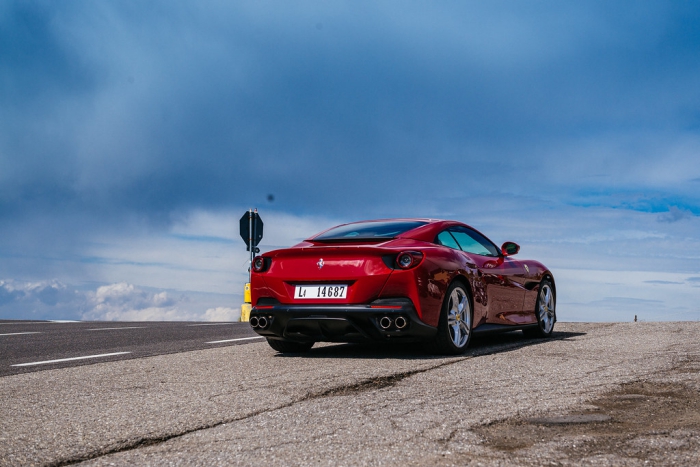 With the classic sportscar long hood and short deck design, the Portofino has hints of the legendary 250 GTO in its silhouette. 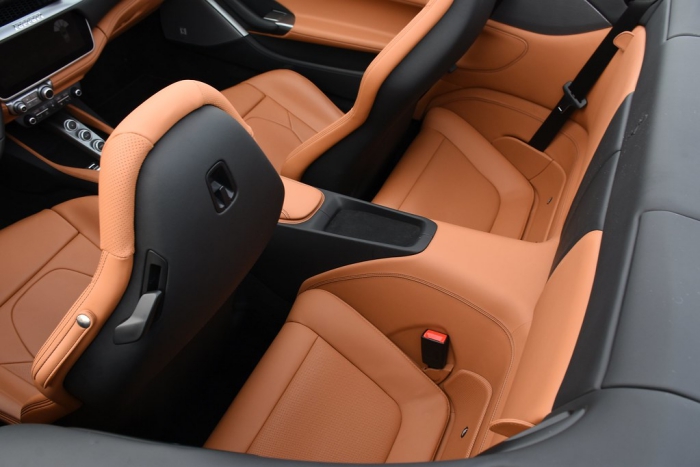 What is more remarkable is that the Portofino is a 2+2 which means midgets, pets or not-so-good friends who really want a ride in a Prancing Horse can now tag along. Those not lucky enough to be inside can admire the various vents and ducts that dot the bodywork. From the carbon splitter to the side air-vents (which extract air pressure build-up from inside wheel housing), every crease and indentation serves a purpose. The tail-lights for instance, are spaced wider in order for the boot-lid spoiler to be extended, which in turn serves to reduce drag. Yet, the whole design of the Portofino is sumptuously proportioned - unrestrained without screaming look at me. 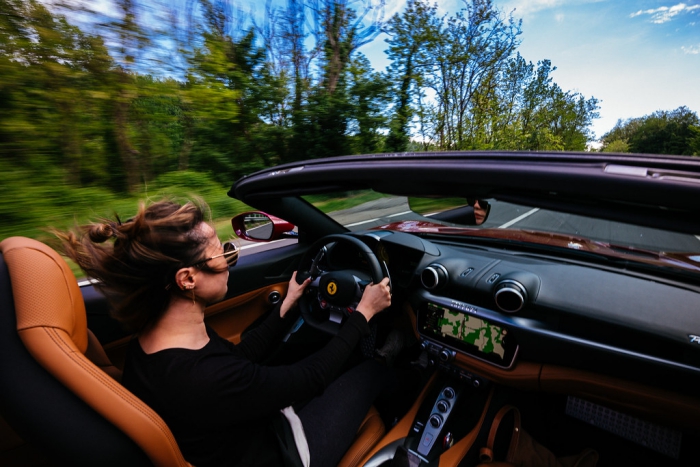 Despite being the successor to the 'entry-level' California launched a decade ago, the most wallet-friendly (if you consider S$900+k friendly) Ferrari feels decidedly upmarket. Yes, it might not have the cachet of the 488 Pista Spider, but as we're enjoying it al fresco under the Tuscan sun, I can't imagine how much more I'm missing out on.

(The Portofino would have been a great companion during the recent Ital Auto 10th Anniversary drive to KL, click HERE to read about it) The Portofino may 'only' have 600hp compared to the Pista Spider's 720hp, but that’s like saying Jack Ma is poorer than Bill Gates. It will dispatch the century sprint in 3.5secs and its top speed is on the wrong side of 300km/h, yet your granny - or girlfriend in my case - can drive it to McDonald’s. In full auto with the steering-mounted Manettino set to comfort, the dual-clutch gearbox behaves like a slick-shifting automatic matched to a massive nat-asp engine. With 760Nm available from 3000rpm, there is no turbo lag whatsoever from the 3855cc V8. And while I miss the excitement of the 458's manic war cry as it pulls towards a 9000rpm redline, the Portofino is every bit as fast - on paper - as well as through the seat of one’s pants. Compared to the California, it’s 80kg lighter yet 35 per cent stiffer, and remarkably, there's no scuttle shake at all with the top down. The roads get narrower and windier, but traffic also thins out. Pressing on, the Portofino exhibits stupendous grip and little body-roll. The all-new electric power steering is accurate but I'd have appreciated a little more feel.

Perhaps as a nod to the Portofino’s GT character and its role as an everyday Ferrari, the entire driving experience is effortless. We never came close to the chassis or tyre limits on the sinuous mountain roads, and while the Portofino never felt out of its element, we enjoyed it more as fast cruiser than bruiser.

This is a car best enjoyed at 7/10, which I think is what most people will drive it at. No complaints though about the interior and creature comforts - the optional touchscreen passenger display is a must-have.

Positioned above the glove compartment, those riding shogun enjoy a view of the car's vital information: How many g’s you’re generating, gear selected, revs and even the Manettino position (in case your driver decides to take the sideways route up the mountain with ESC Off!)

(We saw this in the GTC4Lusso too... click HERE to read about it) For the driver, the rev counter takes centrestage and is flanked by vivid TFT displays that can be configured to show a variety of onboard data.

For those who have not driven a modern Ferrari before (in other words, anything from the 458 and newer), a first glance at the busy-looking flat-bottomed steering wheel might worry you.

However, after a few runs, all the knobs, paddles and switches of the steering wheel fall readily to hand and become second nature to use. There’s plenty to like and little to dislike about the Portofino. There’s more than enough speed to run with the big dogs, enough comfort for intercontinental drives, and if or when the road turns curvy, just pop the roof down and enjoy the glorious soundtrack.

If you must, think of it as Ferrari’s Swiss army knife...