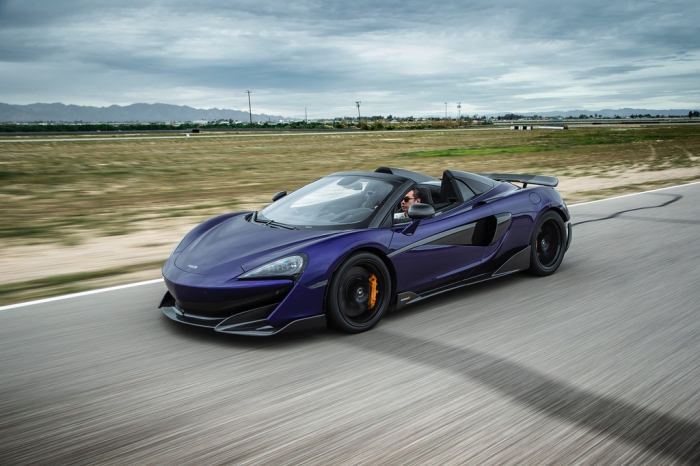 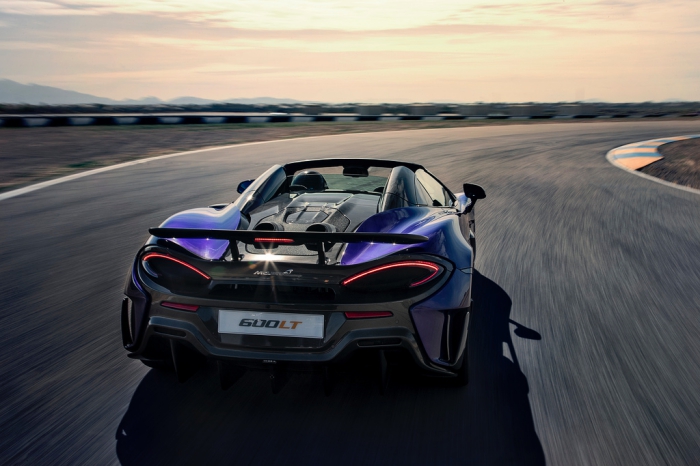 Arizona Motorsports Park, Arizona – How do you top an act like the 600LT Coupe? For starters, you could lop-off the top, which is exactly what McLaren has done with the 600LT Spider, the brand's fourth LT (short for Longtail) in recent times – if you count the F1 GTR Longtail progenitor, that's five, but we reckon the McLaren entity that created that cracker in 1997 is a lot different from today's McLaren Automotive. 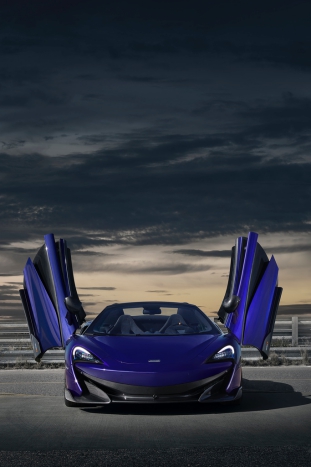 In a nutshell, McLaren's 'LT' models are its lightened, powered-up and dynamically-honed track-prepped, road-going models in the same mould as Porsche's GT2/GT3 RS cars, or Ferrari's special series V8s like the 488 Pista and 458 Speciale.

Both the 'entry' Sports Series range (that the 600LT operates in), as well as the loftier Super Series feature LT variants, although we're still waiting for the 7xxLT to appear after its predecessor – the talented 675LT from the time of the 650S – stole our hearts. 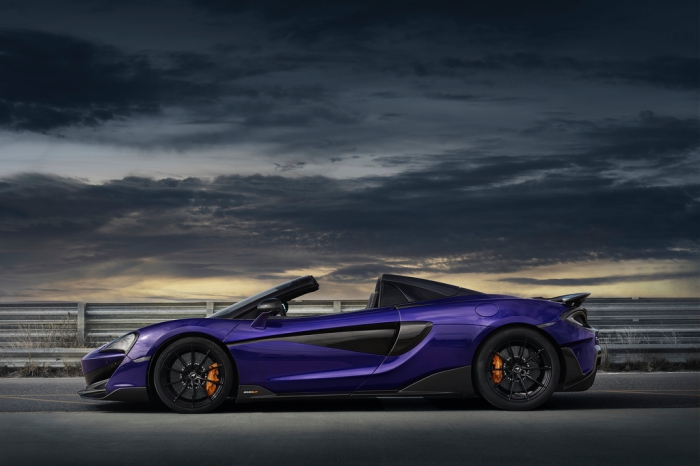 In such a segment, half the fun comes as much from the 'show', as well as the 'go', since you don't get a seat at the table if your appointed champion's performance credentials aren't up to par. Like the original F1 GTR 'Longtail', the 600LT features a slightly lengthened body for better wind-cheating abilities and downforce, and also boasts a wider front track and lowered suspension for better dynamics.

(Click HERE for our First Drive of the 600LT Coupe) 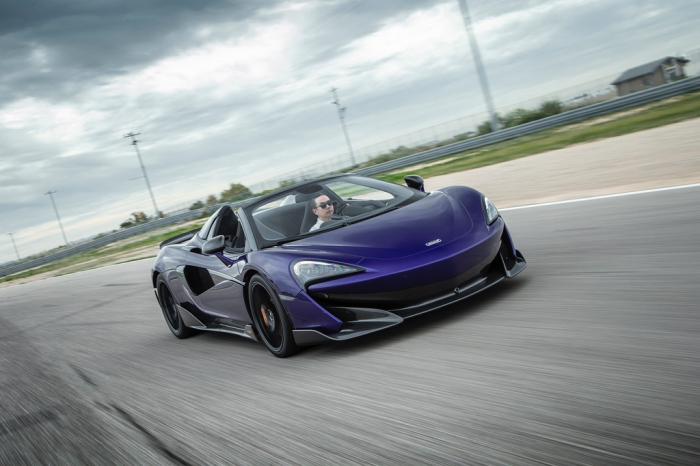 In terms of price point, the 'Sports Series' 600LT Coupe is right smack in 991.2 GT3 RS money (or Aston Martin Vantage and 911 Turbo if you will, if you're thinking of the less hardcore 570S Coupe), and about the million dollar mark in Singapore, while the 'Super Series' 720S is closer to the 488 and Huracan as a rival. However, you'd never think of the 600LT as the 'baby' of the McLaren bunch given its performance, as the 0-100km/h sprint is demolished in under 3secs for both Coupe and Spider. 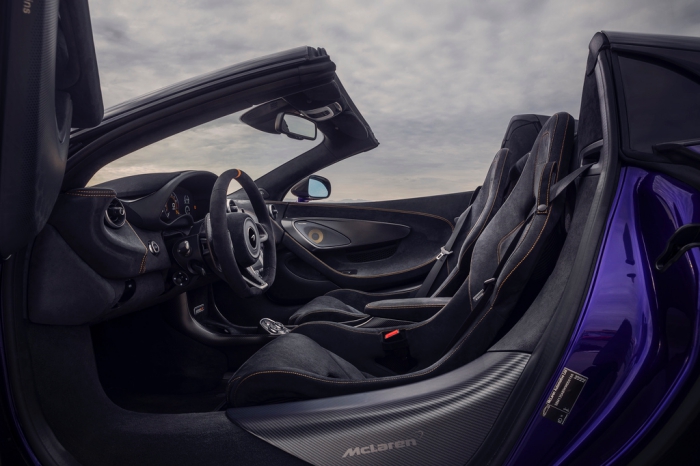 Now that we've caught your attention with the Coupe's raw figures, McLaren ups the ante further with the 600LT Spider, which is in a position to stamp its authority on this segment, because there simply isn't another convertible of such credentials at this price point.

For instance, the all-wheel-driven 911 Turbo S Cabriolet is more plush, fast-road tourer than stripped-out, visceral sportscar, and the 991 Speedster is likely to be a Porsche Motorsport exercise in limited-run unobtanium, and looks set to hit the streets around, or even after initial 992 deliveries start. 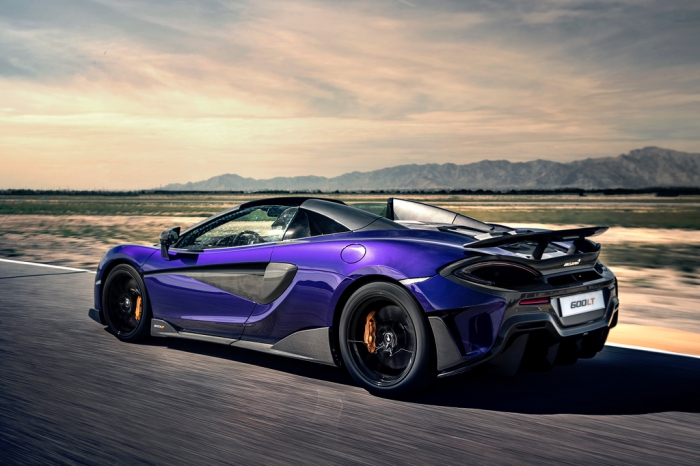 The dramatic dihedral doors that all McLarens have are just a part of the flash factor, because the 600LT adds Senna-inspired top-exit exhaust tail-pipes to its repertoire – mind, on the 600LT, they are even more radical and can be instigated to shoot out flames on-demand; as testament to McLaren's attention to detail, the centre of the rear wing is ceramic-coated to stand up to repeated blasts of flame from the tailpipes. 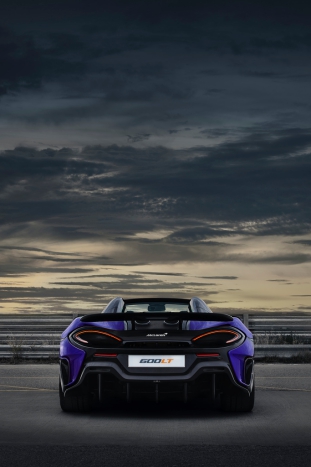 This isn't just a gimmick either – with less plumbing (1080mm less than the 570S Spider, to be exact), this exhaust system saves weight, reduces back-pressure, and is designed to work with the car's aerodynamics, heat-management measures and even the folding trajectory of the hard-top. 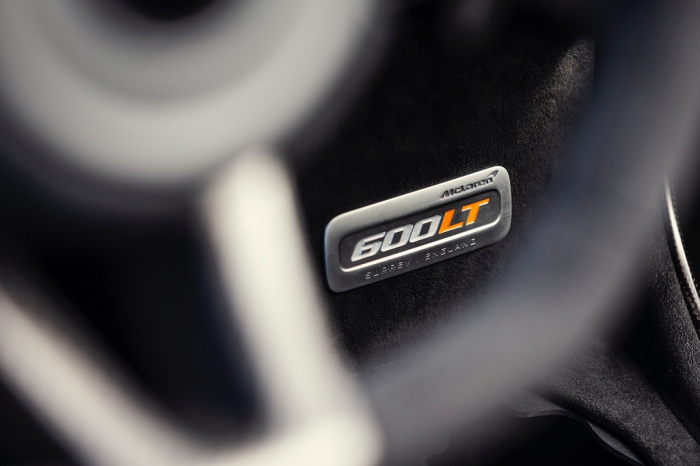 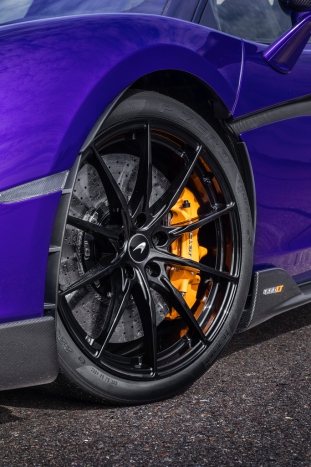 The use of lightweight components for body, chassis and brakes sees the 600LT Spider shed about 100kilos from the 570S Spider's kerbweight, with the retractable hard-top adding only 50kg compared to the 600LT Coupe – all in, the DIN-rated kerbweight of the 600LT Spider tips the scales at a whisker over 1.4-tonnes with fuel and fluids. Not everyone is a fan of drop-tops, sometimes because of the conspicuous lifestyle cachet and sense of frippery it confers on both car and driver. Don't forget though, there's nothing more serious in motorsports than the raw and raucous world of open-wheel Formula racecars, and the 600LT Spider is no exception.

Structural issues and the accompanying reinforcement solutions that add weight plague many sporty convertibles, but these aren't concerns with the 600LT Spider, thanks to the super-strong, super-rigid carbonfibre Monocell II tub that serves as its lightweight underpinnings – there's no rigidity difference between 600LT Coupe and Spider. The rear glass panel can also be lowered (or raised) independently of the roof, so keeping it down with the roof-up still lets the occupants enjoy the V8's full-bodied soundtrack at the upper reaches of the rev register. With such driver-focused sportscars, the absolute performance paints only a small part of the big picture, because believe it or not, fun, fast and the feels are mutually-exclusive concepts.

With the 600LT, the big picture often involves the tyres scorching cheeky graffiti streaks of squiggly-wiggles on the tarmac as you create the sort of shouty and smoking modern art that speaks volumes to petrolheads on an almost spiritual level. Roof-down, the 600LT Spider is a captivating devil that boasts a driving experience even more intense than the Coupe's, because of the vividly textured, multi-sensory assault on mind, body, soul and naturally, the pockets of those lucky enough to be in the running for the car. On-road, it may surprise you to learn that the twin-turbo'd 3.8-litre V8 doesn't deliver postcard-perfect lag-free performance, but this adds to the 600LT's back-to-basics, drive-it-like-you-stole-it appeal and properly underscores the nature of the beast.

It takes us back to an earlier generation of turbocharged sportscars where strategy, introspection and skill was essential to drive smoothly and quickly, as opposed to today's many stomp-and-go offerings. However, the light lag ceases to be a concern when you unleash the car on-track, because the engine is constantly in the spool sweet-spot in maximum attack mode, as it belts out an angsty, hackle-raising howl punctuated by emotionally-stirring, explosive bursts with each downshift.

The 'Stop' is just as effective as the 'Go' – like the 600LT Coupe, the Spider gets a Senna-inspired brake booster, which provides ample feel for easy and progressive modulation of braking pressure.

(Click HERE for our First Drive of the 600LT Coupe) The steering is feelsomely direct and doesn't whisper as much as it shouts, so you're precisely aware of where the car's at on its playful chassis' sliding scale of grip, with the option to stick or slip just a sharp prod of the 'go-go-go!' pedal away. Drive it in anger to set FTDs and you'll appreciate how much of a precision instrument it is with which to carve up corners, but the best part is how much liberty you can confidently take with the car's attack angle of slip, because of how much communication the driver enjoys when you're approaching the car's limits. And who cares if going sideways is not necessarily the fastest way around the circuit? We reckon it's the 'funnest' that will put a huge smile on the driver's face, and the 600LT Spider serves as a fabulous (v)room with a view.