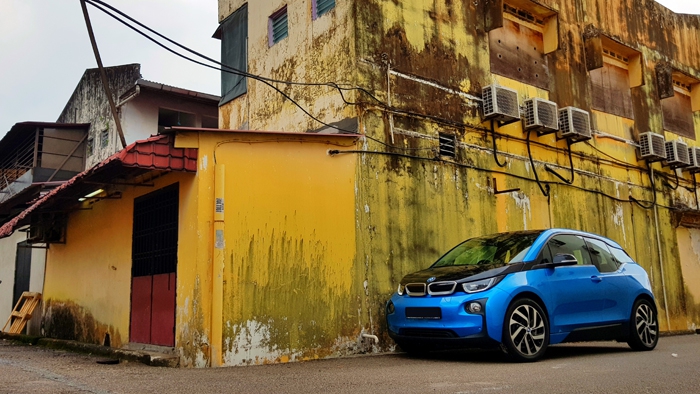 JOHOR BAHRU, MALAYSIA - We’re in mortal danger of busting the little road’s speed limit – in fact, blink and you’d have tapped 60km/h in the ‘little’ i3 (it’ll scamper to 60 from standstill in just 4secs). 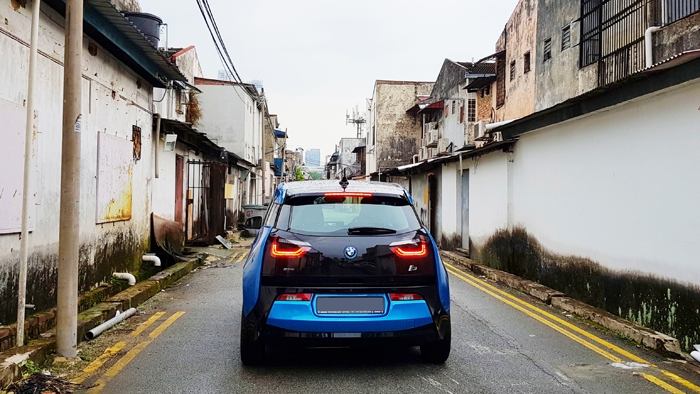 There have been a few hotly anticipated cars this year, and the ‘facelift’ i3 makes it to my list – yes, it’s easily in our Top Ten and rubs shoulders with exotic machines like the 812 Superfast, 720S and Civic Type R.

In a nutshell, this 94Ah model replaces the earlier 60Ah i3, and while you don’t get more juice (you’ll have to wait for the ‘hotter’ i3s model for that), the ride is now better resolved and it boasts a combined range from both electric motor and Range Extender (REx for short) that is good for at least 250km. 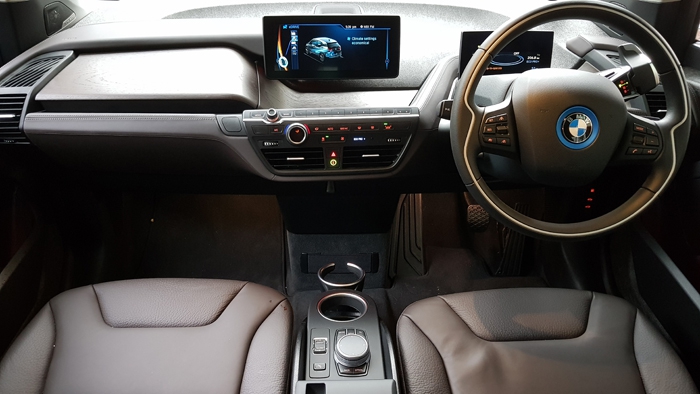 There are EVs that deliver a range of 400+km, but it’s all about horses for courses. There’s a reason why we emphasise ‘city-car’ when we refer to the i3, and there’s no better urban environment than Singapore (and some say Sentosa or JB) to experience the joys of zero emissions motoring. 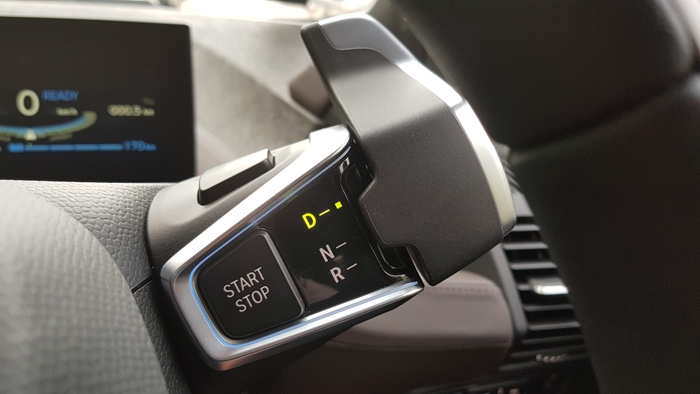 To put this in perspective, based on my average travel patterns in Singapore, I could get away with charging it once every four days.

Of course, we’re not saying you should give up your garage of sportscars, but the i3 is for you to make light work of daily soulless commutes to/from the city, with the fun cars reserved for proper, special-occasion driving trips. 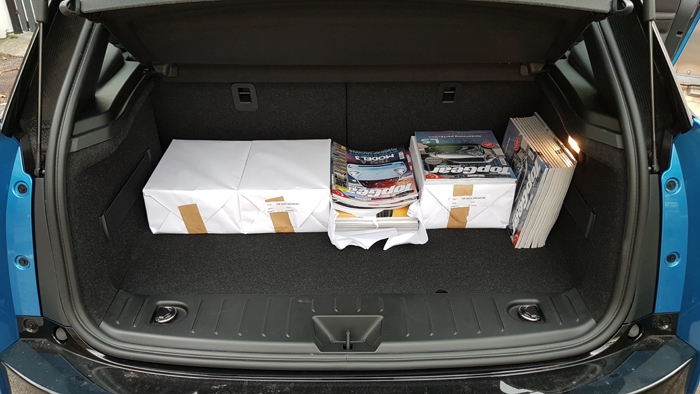 Although Performance Motors will sell you a ‘pure’ i3 (with no REx) for about S$187k, the REx provides peace of mind if you want to cross the border; besides, you can always run it with the 647cc two-cylinder petrol ‘generator’ empty if you’re after the full-electric experience, although the added 120kg of the REx does blunt the acceleration performance somewhat.

Bear in mind, the i3 isn’t a petrol-electric hybrid like BMW's iPerfomance models, so the generator charges the batteries, as opposed to powering the car. 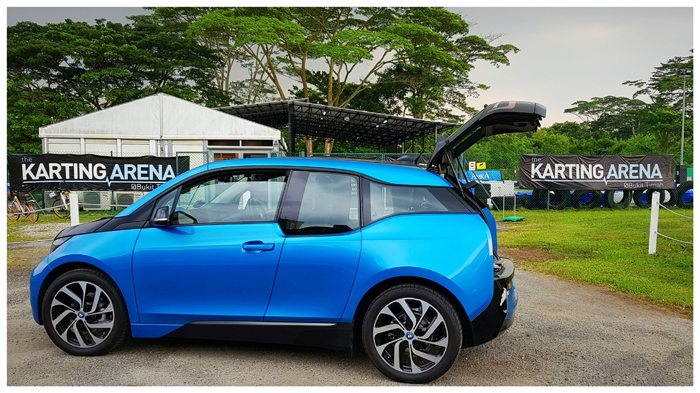 (We visit the electric fun-karts at The Karting Arena)

People think Tesla when the topic of EV is raised, but the marketing juggernaut of the brand and its cult of Musk-eteers are as zealous as Apple’s legion, so make of that what you will.

Sure, a Tesla on a Ludicrous Mode ‘high’ zips to 100km/h in less time and with less effort than one of Sant’Agata’s finest, but taming a raging bull is far more satisfying to me, even if it means being out-dragged by a smirking swot in a S.

Moreover, petrolheads need more stimuli than outright speed to get them hot under the collar, so if you think the appeal of a supercar is only in its quantitative superlative performance, you’ve missed the less tangible, emotional allure of such a thoroughbred sporting machine.

If ever there was a car of our times that captures the spiritual essence of Sir Alec Issigonis’ Mini, it has to be BMW’s full-electric city runabout, the i3.

Now, the i3 is no small car by any stretch of the imagination, but even a look at the latest MINIs demonstrates how far (and large) Sir Issigonis’ namesake has come, and compared to the original, today’s MINI is considerably more maxi.

Long-time readers will be familiar with how much we enjoy the cheeky cherub (the first generation 60Ah was one of our 2014 Cars of the Year winners), especially in the role of the zippy urban transport.

We’re brimming with misplaced bravado with the 94Ah’s extended travelling range and fecklessly decide on an impromptu trip across the border to JB for a day of ‘Meals & Wheels’, with old friends, and as we would discover, new. Unfortunately, this means we’re travelling sans photographer, but we are packing a trio of Samsung Galaxy Note 8s, so those will record our cross-country jaunt.

Besides, there’s some poetic justice in using a high-tech smartphone to record the shenanigans of the equally high-tech i3. 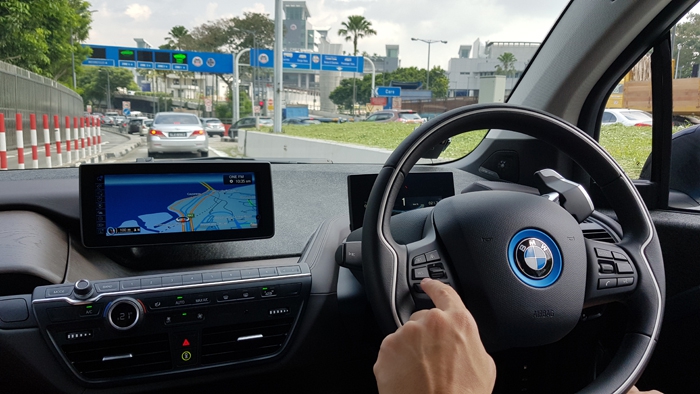 To spread our love for the i3, we volunteered a pal to drive up and down. He’s shocked and awed by the car’s immediate response to the gas pedal as it cuts a swathe through gaps in traffic before the victims even realise they’ve been carved up. If you need hard numbers, we’re talking 250Nm from standstill…

As passengers, the wife and I were chuffed that the ride was now better resolved than the 60Ah’s, and we didn’t have to wince collectively over bad patches, and that’s even over the roads in JB.

A lot of frustration on the road arises when you’re in a car that can’t perform on-demand. The i3’s zippy performance means there’s no battle from the BMW showroom in Singapore all the way through the Causeway.

Couple this to the car’s intelligent cruise function (see video), which came in particularly useful in the stop-and-go queues at the two border crossings, and you have a tidy package. The ‘meal’ bit in our ‘Meals & Wheels’ trip is an important element, so we make a beeline to Kedai Makanan Ah Soon (141 Jalan Keris, Taman Sri Tebrau).

It's not quite Kiang Kee, but hearty enough in the familiar JB-style of claypot Bak Kut Teh, brought to boil the old-fashioned way atop a charcoal-fired stove. 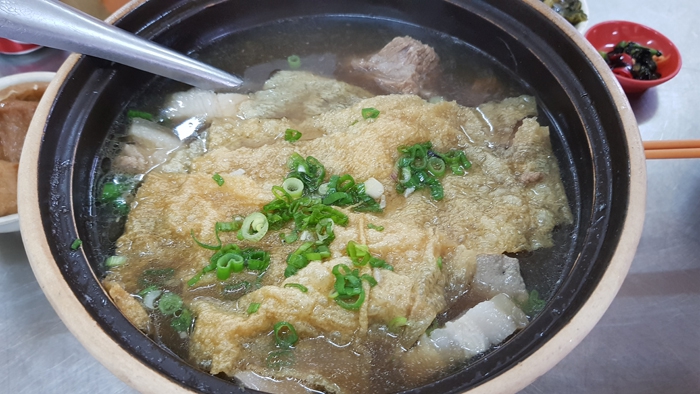 If anything, it's as traditional as the i3 is futuristic, which sticks out of Johor traffic like an iMac in an office of typewriters! There’s genuine curiosity from passers-by as we pull up in the car, but never unfriendly attention. Although the car doesn’t need a juice-up, we aren’t too far from a Type 2 charging point by ‘chargEV’ at the Hotel DoubleTree by Hilton JB (Menara Landmark, 12 Jalan Ngee Heng)... ...so with bellies fuelled-up with pork parts, we take a leisurely drive over, particularly also to challenge the notorious JB lunch-hour traffic.

The i3’s cosy, lounge-like ambience, and the ease of passage with its nimble manoeuvrability to zap itself into gaps transforms every journey. We’re typically full of angst and raging against the other road machines in conventional cars, but in the i3’s airy cocoon of calm, we’re relaxed enough to have a conversation!

The weak link behind every machine is its human user, and this comes into focus when we get to the wall-box charger at the DoubleTree and realise this author didn’t check that the i3 was packing its charging cable.

Unlike Singapore charging points, the ones in JB don’t have cables attached so plug-in vehicle owners bring their own. At the same time, the guys we’re due to meet amble over and the i3 mixes it up with some youngtimers: a pair of Mercedes 230 TE stationwagons (S124 and S123)...

Technology and a passion for cars certainly make the world a smaller place, and it was cool to have the group poke and prod its way around the i3. 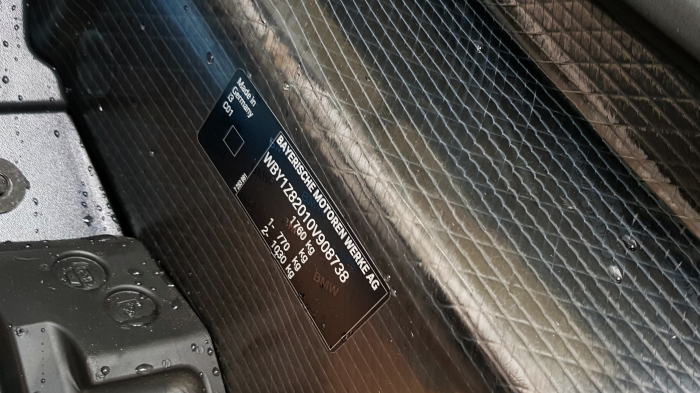 Don’t look so surprised, the BMW has a few tricks up its sleeves, from the exposed weave of its carbonfibre Life Module passenger cell (yes, just like the McLarens)...

...quirky suicide doors, chic minimalist cabin and of course, looks one either loves-or-loathes! At this point, the i3 hasn’t had its meal yet, but we’re all set for our next at Tosca, an Italian trattoria on the 13th floor of the hotel for... ...and steak platters. As is common in the company of friends, we eat more and talk longer than is healthy for us and reflect that the last-minute trip was a great decision after all. Post-lunch, we’re invited to visit some even older wheels by their larger-than-life, vegetarian owner – an Aquamarine Blue Porsche 356 A... Talking cars makes us hungry, and we head to the Passionfood Cafe and Bakery (71 Jalan Serampang, Taman Pelangi) with the 356 in the lead for some kopi and sweet treats...

...but we’re starting to feel a little guilty the i3 hasn’t been fed yet, and it’s been running fuss-free so far.

Naturally, we miss our window to beat the rush-hour back to Singapore and the prospect of a long wait looms. Just then the phone buzzes and it’s BMW Malaysia calling to find out if we’re still looking for a cable so we can complete what we came up to do in the first place – charge the i3! Result!

We breakaway from the melee and proceed to Auto Bavaria (Jalan Skudai Batu 4 1/2, Bangunan Star), where the techs are waiting with broad grins to give the i3 its first meal of the day, some eight hours after we first crossed the border!

Now that the i3 had its fast-food quick-hit, we don’t feel as guilty thinking about dinner. As luck would have it, a pal hears we are in town and takes us to a dinner... ...which is a short hop from the Second Link back to Singapore.

We eventually get home a full 12 hours after we first collected the car and with 50+km range left, and as with everything we’ve discovered about the i3 so far, it’s been an enriching and transformative experience – technology does break down borders and barriers to make the world a smaller, and dare we say, convivial place. From London to the frozen Arctic in BMW's revolutionary i8 sports hybrid. What could go wrong? New kit on the facelifted BMW iX3 means that it looks prettier. But is it a better car? Clifford Chow takes a drive. And 600km of range on a single charge. Here’s your first look at a prototype