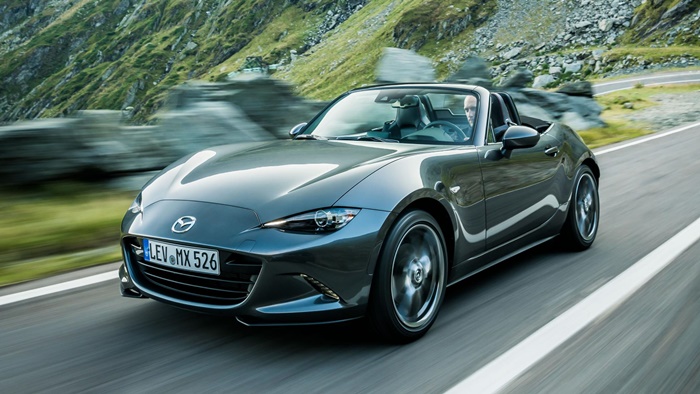 This is the fourth generation of MX-5, and it’s just received a mid-life update. By MX-5 standards, it’s actually a biggie, because for the first time in ages there’s actually more power. While the MX-5 sticks to its roots, only powering its rear wheels with naturally aspirated petrol engines – no all-wheel drive or turbos here – those engines are cleverer than ever, benefiting from all the nuanced tech that comes from Mazda’s ‘Skyactiv’ engine development. 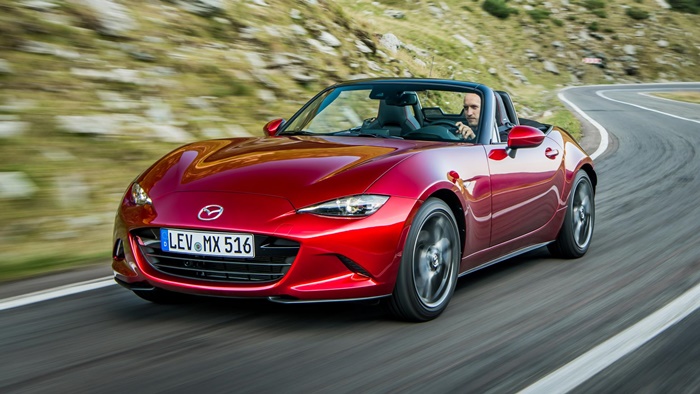 So while they remain 1.5- and 2.0-litre engines, they have tweaks. The former sees its power and torque figures pretty much as before – at 130bhp and 152Nm – but it’s the latter where lots of interesting work has been done.

The range-topping 2.0 has seen power climb by 24bhp, to 182bhp, which in a car that basically weighs a ton is big news indeed. It cuts nearly a second from the 0-100km/h time, now 6.5secs. The rev limit has also climbed by 700rpm, to 7,500rpm, so you should have a bit more fun working the engine hard via its sweet 6spd manual gearbox. Extra performance hasn’t come about from a simple ECU remap, but from deeply nerdy mechanical things like shaving some weight from the pistons. Hard work, when the power climb that could have been doubled by simply sticking on a turbo. We’re glad Mazda took the tricky, technical route though. The MX-5’s always stood out for sticking resolutely to its simple mechanical layout.

So, weight has been shaved from the most intricate engine components to make the unit as punchy and efficient as possible, while there’s even stop/start and brake regen to eke out further fuel economy from a car already unfathomably good at approaching 4.8l/100km, even when driven with vigour. Other tweaks for the mk4 MX-5’s update include the addition of (optional) new tech – including Apple CarPlay alongside active safety stuff, such as lane-departure warning and blind-spot monitoring systems – as well as some interior quality improvements, the most telling of which for those who love driving is that the steering wheel now extends for reach, as well as height.

Stop scoffing: among 50:50 weight distribution, perfectly placed pedals and a low-slung seat, the inability to pull the wheel out to your chest was a real bugbear on the MX-5, and fixing it could prove as tangible an improvement as those extra bhp. 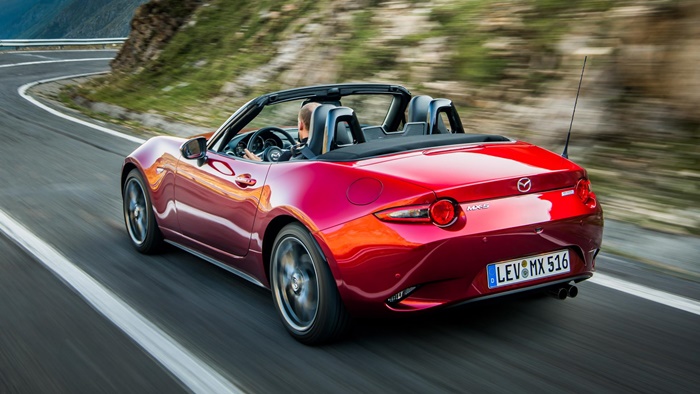 The MX-5 remains an exemplar of why pure, simple sportscars can be so much fun to drive. Its light weight immediately makes itself known, the car steering and accelerating with an alacrity that’d be dumbed down by more weight and complexity.

It’s a joy to drive, put simply, and a great advert for sticking with a good ol’ manual gearbox, rear-wheel drive and no turbocharging. You just get in and drive the knackers off it, not delayed by the need to prod through any confusing driving modes. Bar choosing whether the stability control is on or off, a selection which requires one simple button press.

You can safely drive it with the nannies off, too, because it’s a car of fine balance and with (still) not quite enough power to overwhelm the rear axle through throttle use alone. Unless it’s particularly wet outside, you’ll need to throw this car around a bit if you want to free your inner Ken Block. 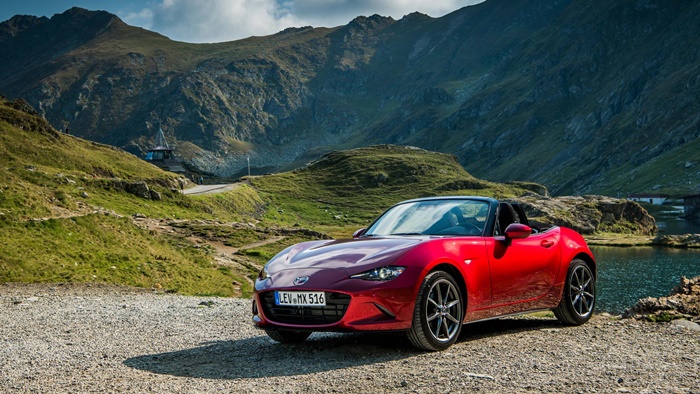 It’s a sweeter car driven just below its limits, though. It’s not as hardcore or focused as something like a Toyota GT86, and you’ll enjoy it more when you’re smoothly flowing between corners, maintaining your momentum on a great piece of road rather than trying to paint black lines on it.

The 2.0-litre’s extra power is tangible – it’s definitely brisker than before – but it’s those extra revs you’ll really notice compared to the outgoing MX-5. While 7,500rpm still isn’t as dizzying as sportscars of old (the Honda S2000 comes to mind), it’s still a riot to rev out second and third gear in this thing. The exhaust has been livened up with the MX-5’s update and it sounds raspier than ever; you’re really rewarded for hanging on until the red line. That gear shift is oh so sweet, too.

The cheaper 1.5-litre isn’t a bad substitute, though. It also revs to 7,500rpm, so you’ll be getting similar thrills, just at slightly slower speeds. The 2.0 gets more senior stuff as standard – a limited-slip differential and, on higher trims, some fancy Bilstein suspension – so it’s definitely the keen driver’s choice. But if you want a roadster for sunning yourself or a spot of posing, the 1.5 does the job marvellously. On first appearances, the MX-5 interior is ‘as you were’, with a pleasingly simple layout that takes minutes to learn and seconds to appreciate. A big fat central rev counter, perfect pedal placement and manual air con controls (rather than confusing, on-screen stuff) will make those who simply love the act of driving beam straight away. 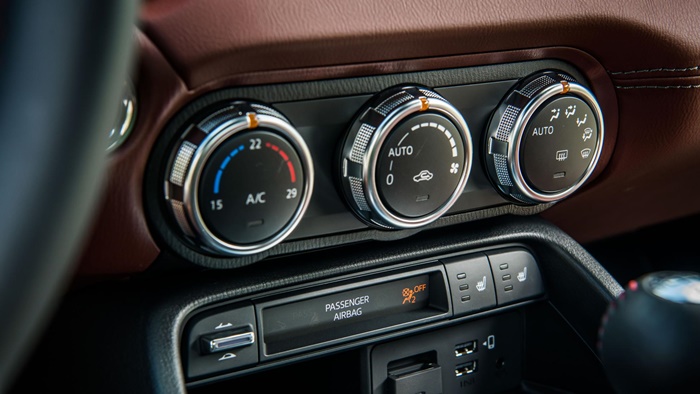 And the one thing that used to break their smile – the inability to put the final cherry atop a great driving position by pulling the wheel nice and close – has been fixed by Mazda finally giving the MX-5 a reach-adjustable steering wheel. Though it still doesn’t come out especially far, but at least it’s a start. 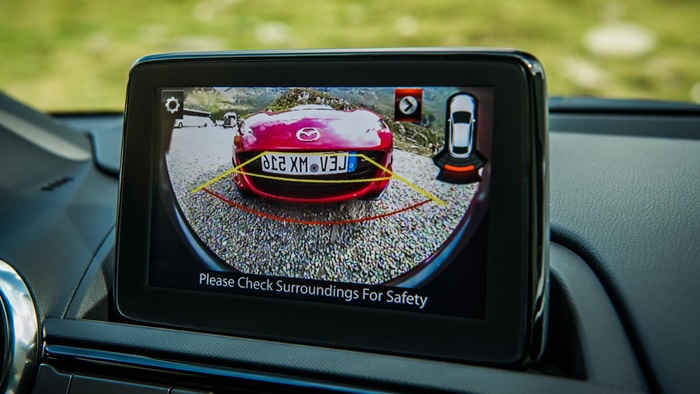 You’ll still need to be six feet or shorter to fully enjoy being a driver or passenger in here, too. Parked beside increasingly stocky SUVs, the MX-5 feels especially dinky, calling to mind when you played with different scale-model cars as a kid.

While there’s more than enough room for most inside, taller people should really take one for a test drive to make sure a) they’re comfortable and b) their forehead doesn’t act as a fleshy, sensitive wind buffer once the roof is down.

Beyond the big steering column news, interior headlines for the updated mk4 MX-5 are doors that open a bit wider, some reinforced cup holders and the addition of proper smartphone link-up for the media screen. Though that’s an option, albeit one that can be retro-fitted to the outgoing MX-5.

But in truth, nowt much needed changing, and it’s still a surprisingly practical car – the boot’s not ginormous, but it’ll swallow holiday gear if you use squashy bags (rather than cases), while there’s a big old storage cubby between the seats that’s deep enough to lose small pets in. Don’t ask.

There are two big choices to make when buying an MX-5: 1.5- or 2.0-litre engine, and soft-top or ‘RF’ hard-top. The latter gets a three-piece folding roof that’s more like a targa top, so you’re far less exposed to the elements when it’s open than the simpler, cheaper roadster.

It’s also more complex in operation, requiring you to be driving 10km/h or less (you might as well stop) and taking 13secs to electronically whirr open or closed, whereas the roadster’s operation is entirely manual and can be done in three seconds with a quick flick of your arm.

The RF also gets pretty blustery inside on the move, so choose it only if you prefer the looks. Or have always craved the MX-5 coupe Mazda’s never put into mass production. 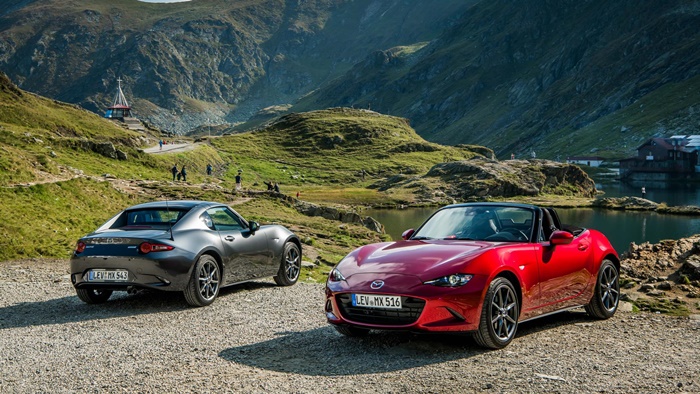 Not using turbochargers mean the MX-5’s claimed CO2 figures – between 143 and 157g/km – might not be as low as similarly powered cars elsewhere, but in the real world they’ll likely be far more realistic.

Likewise fuel economy: Mazda claims 5.2l/100km for the 1.5-litre and 5.8 for the 2.0-litre, and if our own real-world experience of the original mk4 is anything to go by, 5.9l/100km+ will be a doddle and 4.7l/100km more than plausible should you drive with slightly lighter feet. Yep, a car whose fuel economy figures you might actually beat.

While all MX-5s come as standard with a sweet, snickety manual gearbox, those who require an automatic can have one, though only on a 2.0-litre RF. Unless you really must have an automatic car, it’s no great shame that it’s only available on the most expensive model.

The Mazda MX-5 isn’t the world’s best-selling roadster by accident: its recipe of simple mechanicals and accessible fun mean it’s a car with cheap running costs and broad appeal. Mazda does well not to mess with the recipe too much, so the MX-5’s latest update focuses on details without disrupting the bigger picture. It’s still hugely fun to drive, while still falling short of being the benchmark for handling precision.

But that’s rather the point: stiffer suspension and a bit more anger would add too much edge to a car that just wants to put a smile on your face at sensible speeds. Something the MX-5 continues to do with aplomb. 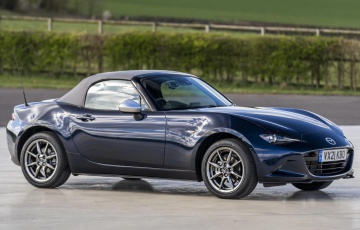 Yep, it’s ANOTHER limited MX-5. This one’s a rebirth of the Sport Venture