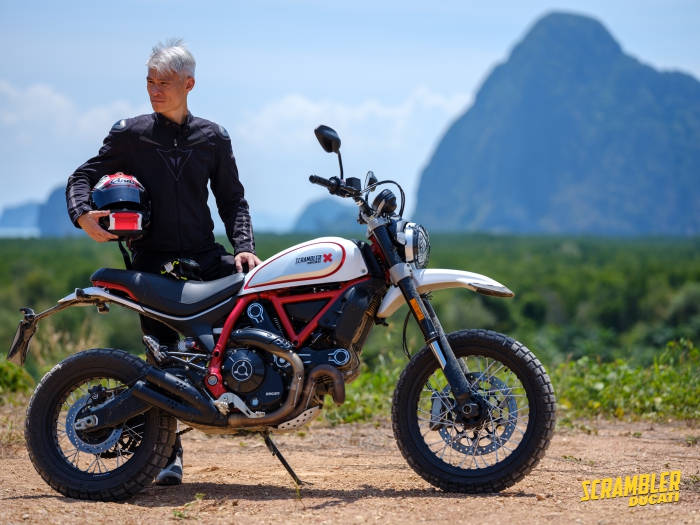 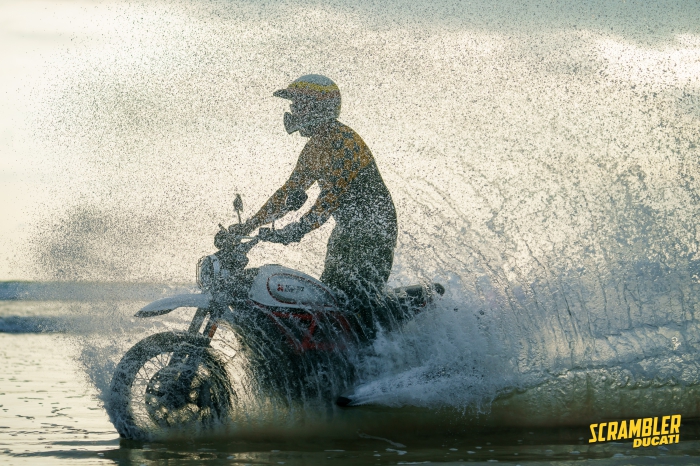 KHAO LAK, THAILAND - Ducati says its Scrambler is the 'essence of motorcycling and a world filled with freedom, joy and self-expression.'

Unbeknownst to many (including myself), the Scrambler is Ducati's sub-brand, distinguished from the performance-oriented philosophy of the other model ranges. 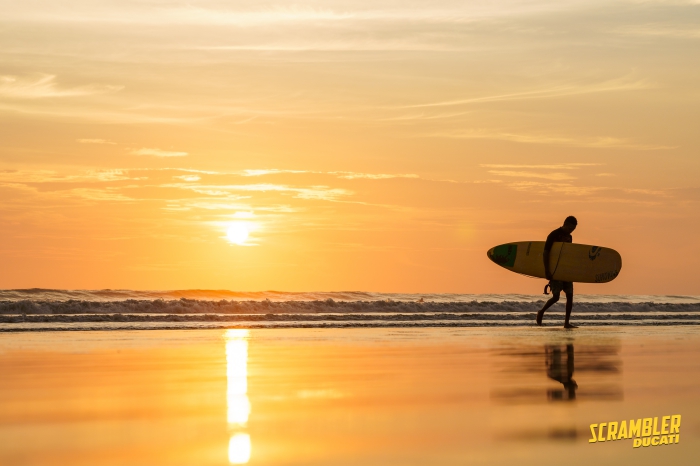 The Scrambler draws inspiration from its roots in 1962, when Scramblers were single cylinder road going bikes created for the US market, inspired by Michael Berliner's modified Ducati Diana used in dirt track racing.

The Scrambler range was paused in 1975 when Ducati decided to focus on racing and performance bikes, and relaunched in 2014 as an accessible, easy-to-ride, stylish street-bike.

'Land of Joy' is Ducati's slogan (vision) for the Scrambler range. Apt then, that the beach-side resort destination of Khao Lak in the Land of Smiles was the venue of the test.

The bikes were ridden over two-hundred kilometres that comprised A-roads, twisty B-roads and in the case of the DS, a short offroad section of hard-packed mud, broken tarmac  and gravel. 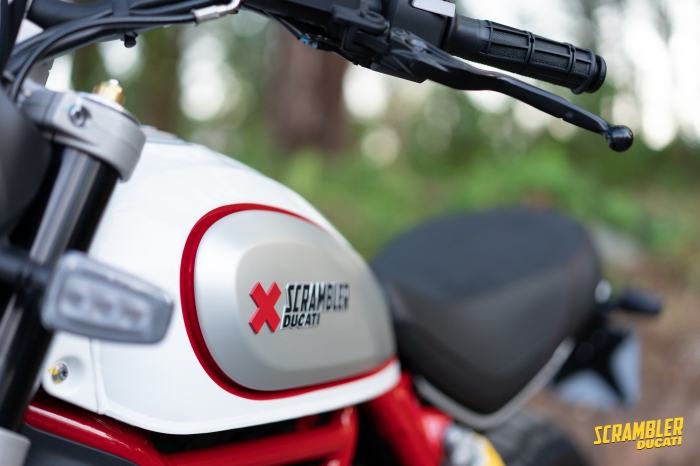 Like all good Italian companies, Ducati motorcycles are known for their performance, and arguably, design (the so-called great motorcycle designers are either working somewhere else, retired or dead). 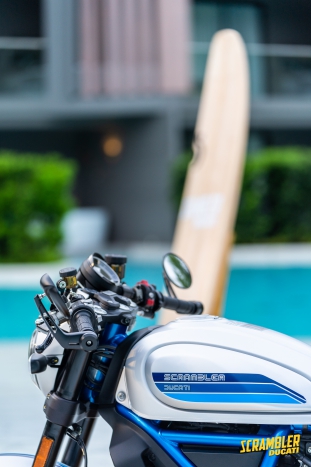 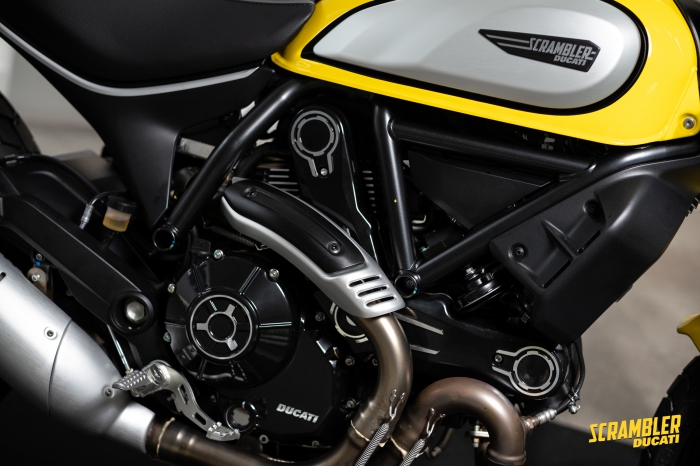 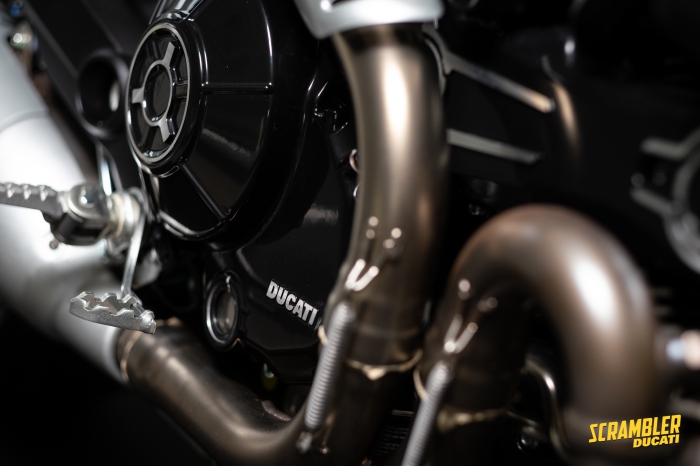 To top-off the aesthetics is a glass-lensed headlight, and Day-time Running Lights (DRL). The Icon is now also offered in 'Atomic Tangerine', or orange to you and me. Important features previously absent are now standard: Cornering ABS, as well as gear indicator and fuel gauge.

Also, replacing the cable-actuated clutch is now a hydraulic clutch (pump), which is five-step span adjustable. In keeping with the competition, the Scrambler is now Ducati Multimedia System (DMS) ready (if you spec the option), which connects the dashboard with your media device and helmet commset.

Weighing in at 189kg and powered by an 800cc 73hp/67Nm L-twin (90 degree v-twin), the Icon is the street bike of the range, with a newbie-friendly 798mm seat height allowing the majority of population, male or female, the confidence to get on, ride off, and stop without fear of tipping over.

The ergonomics seemed to suit everyone. Long limbed six-footers in our group sat comfortably, unaware their knees looked hitched up to their armpits. The new hydraulic clutch is also newbie-friendly, with the pull action feeling no heavier than the cabled clutch it replaces.

The air-cooled 800cc was never going to be really exciting on paper, and ridden at highway speeds, it was a little underwhelming compared to the bike's maneuverability. The engine pulls nicely from 4500rpm to 7000rpm, after which vibrations became intrusive and the engine seems to run out of puff.

The Icon’s redeeming quality is that it can be chucked into corners without complaint, with the updated suspension working well to prevent mid-corner yaw and pitch. The Icon's handling is so sure-footed, we even managed to deck out our toe sliders a few times.

Roadworks and haphazard traffic en route gave us the opportunity to apply firm brake (pressure) on a few occasions, with the single 330mm front brake disc doing well to arrest speed, without recourse to the 245mm rear brake disc.

The clutch action is nicely weighted, so it's a pity that the (toe-shifter) throw seems unchanged (long). Disappointingly, the false neutral gremlins were still at work, particularly when shifting from 5th to 6th gear, both with clutch lever pulled or clutchless. This is the model that everyone was talking about... someone (who owns three) even described it as the 'most scrambler' of the Scrambler range. With a tallish seat height of 860mm (that's sportsbike tall), the sitting position is commanding compared to the Icon, which also helps hide the additional 20kg (versus the Icon) very well. 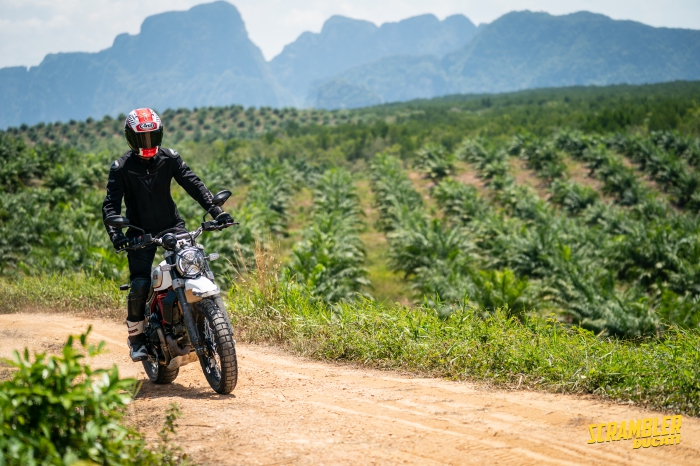 The sitting position is more'in’ the bike, with  controls and dashboard cluster providing more wind protection, thus encouraging a higher (20km/h) cruising speed. Taller riders will appreciate the additional leg-room, whilst (in my case) still allowing complete footprints when stationary. 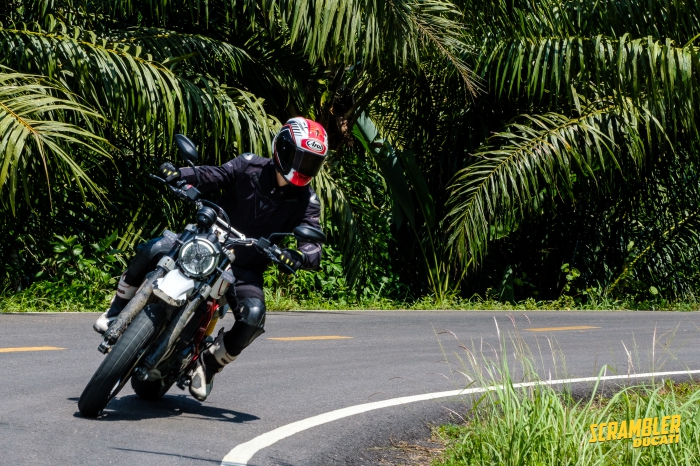 Twisting the throttle, it becomes apparent that the Desert Sled has a different engine mapping resulting (though not on paper) in better low end torque and a wider power band, with engine vibrations only becoming intrusive above 8000rpm (versus the Icon's 7000rpm). 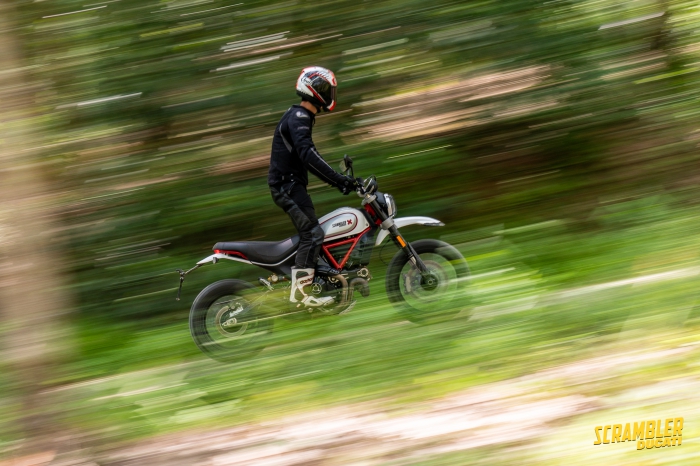 With just 73hp, the 209kg Desert Sled is at best brisk when pushed, and 6th gear ideally reserved for highway cruising.

Arguably, the Desert Sled is the most beginner-friendly offroad-capable street bike on the market to bear the Scrambler name. 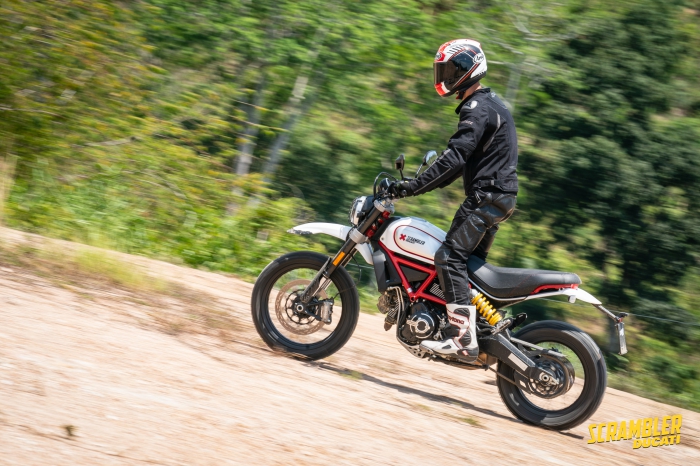 The taller stance and longer travel suspension of the Desert Sled requires some adjustment when hustling it along on-road, with the softer sprung suspension compressing in high0speed, tight turns. Not unlike the feeling of going from BMW R1200R to GS.

According to Mr. Stefano Campaci, Marketing Director (Ducati Asia Pacific) the Scrambler is positioned as an easy to use, accessible motorcycle that embodies Ducati's vision of the motorcycle as a tool for the rider to attain a stress-free state of mind, connect with like-minded people, and collect great memories.

And collect great memories we did. So what of the Scrambler Icon and Desert Sled? We polled the participants, some of whom are already Scrambler owners, with a majority indicating the Desert Sled would be their choice, due to styling, ergonomics, ease of use and off-road prowess. However, beyond the motorcycles, I found myself reminded about Ducati’s draw – the camaraderie amongst owners, the passion teeming in the eyes of the Ducati staff. No snooty 'mine’s bigger' party poopers, but warm, genuine motorcycle loving buddies. I’ve been a petrolhead for a large part of my adult life (though my friends might beg to differ on the adult front!), and bikes in the genre that the Scrambler is in don’t typically draw my attention.

However, for a fleeting moment or three, I can see myself choosing the Desert Sled for city-roundabout duties and the occasional excursion across the border into Malaysia... of course, better still if Ducati shoe-horns the 1100cc engine into it!