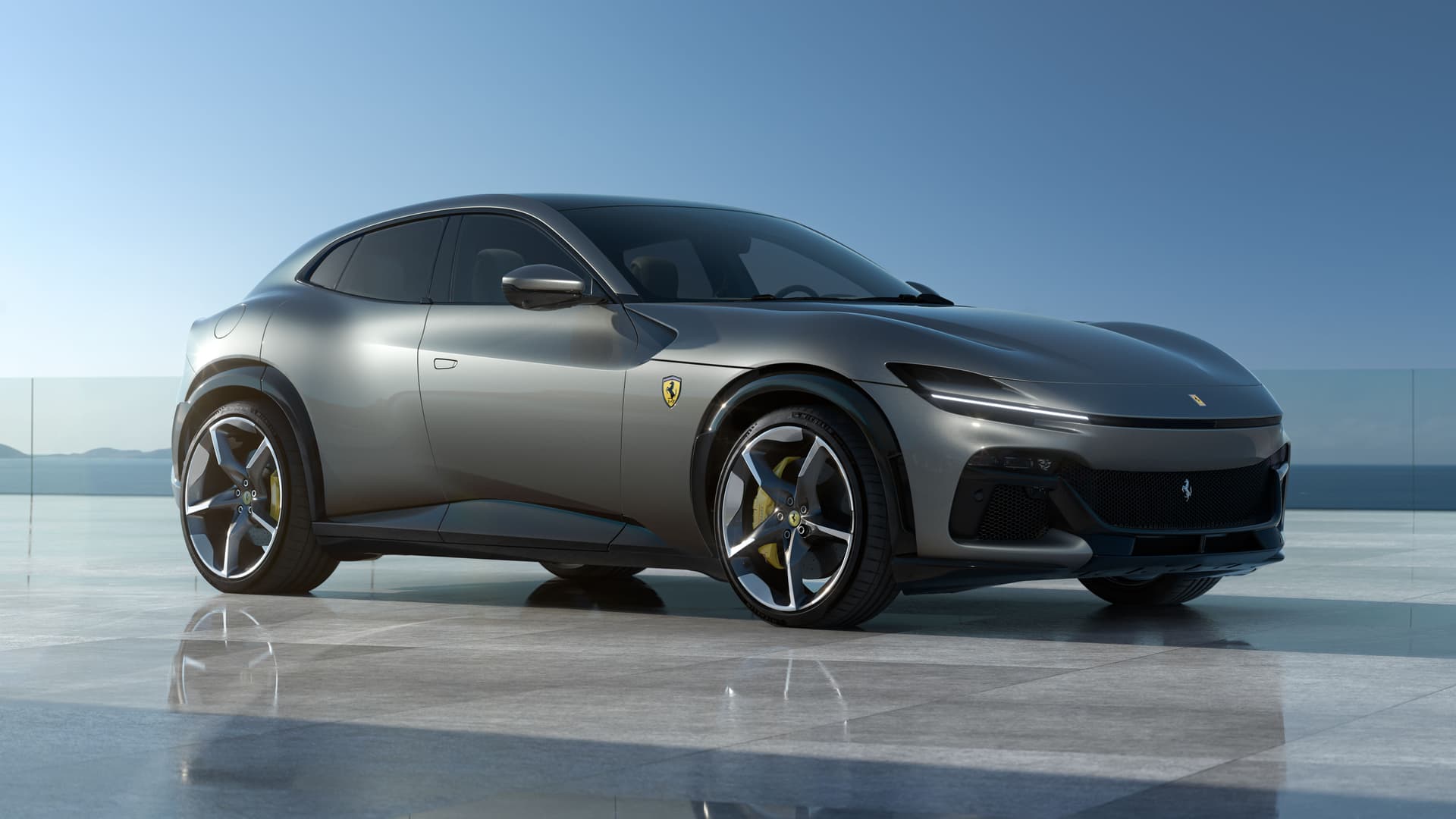 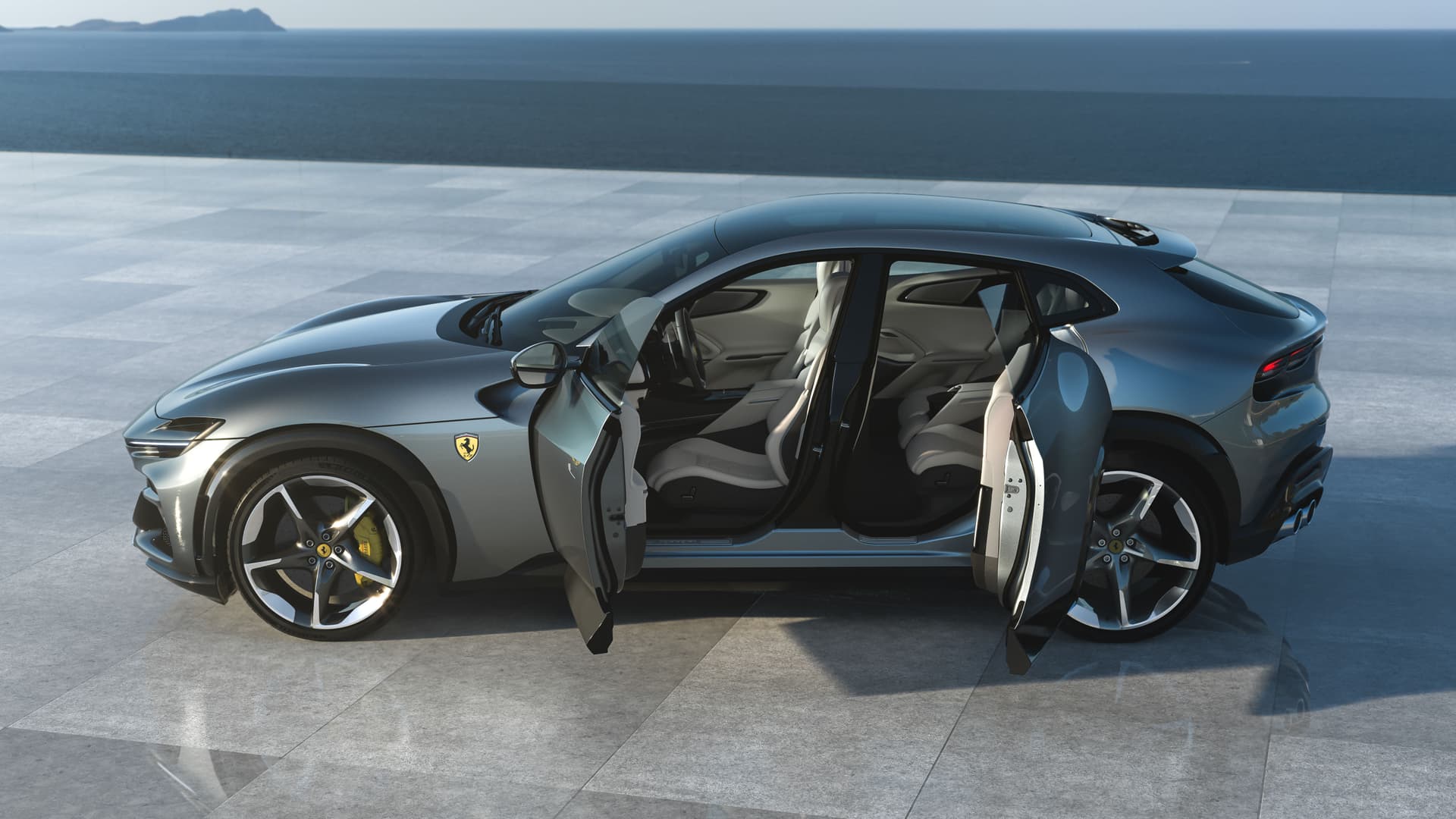 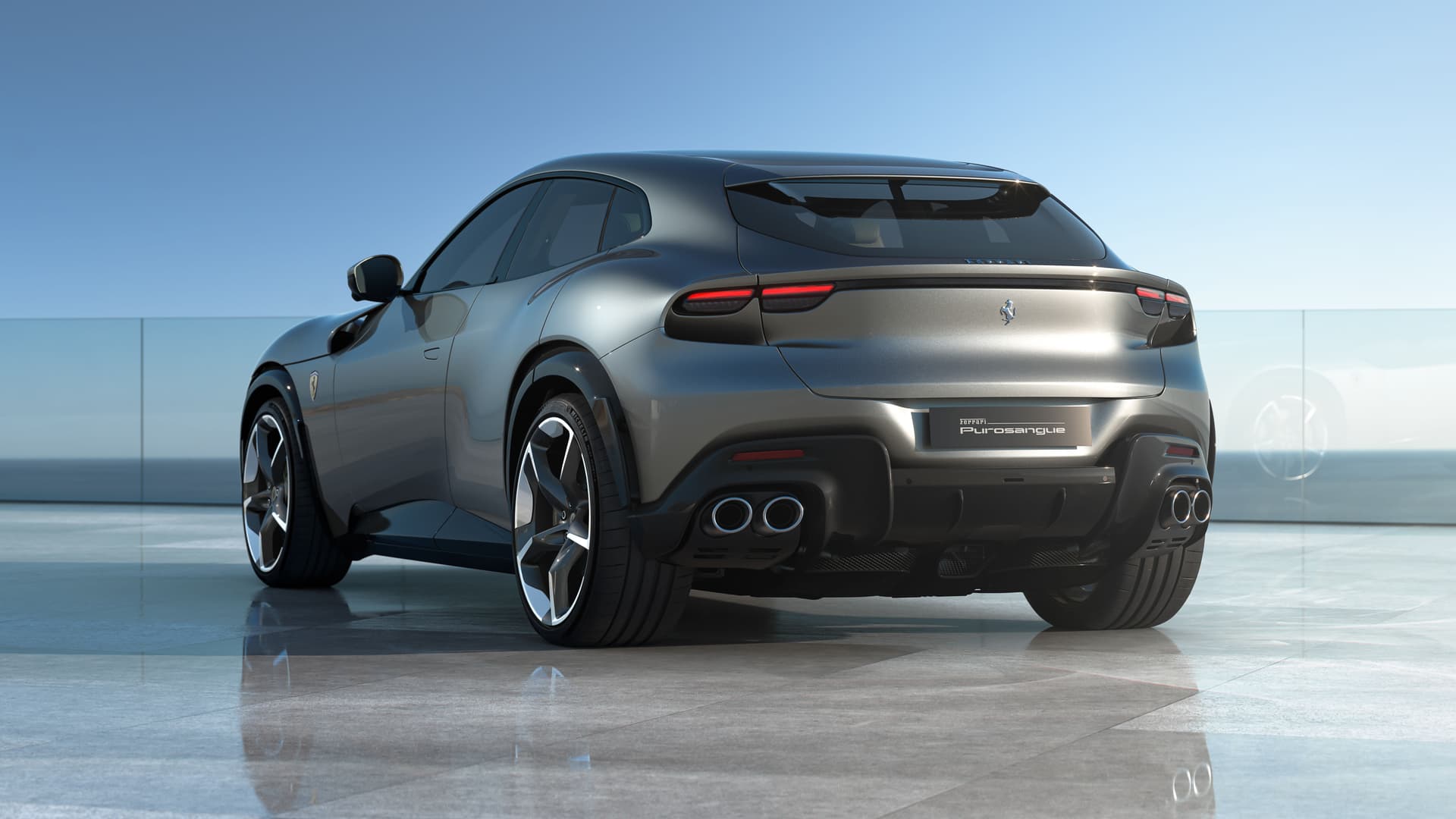 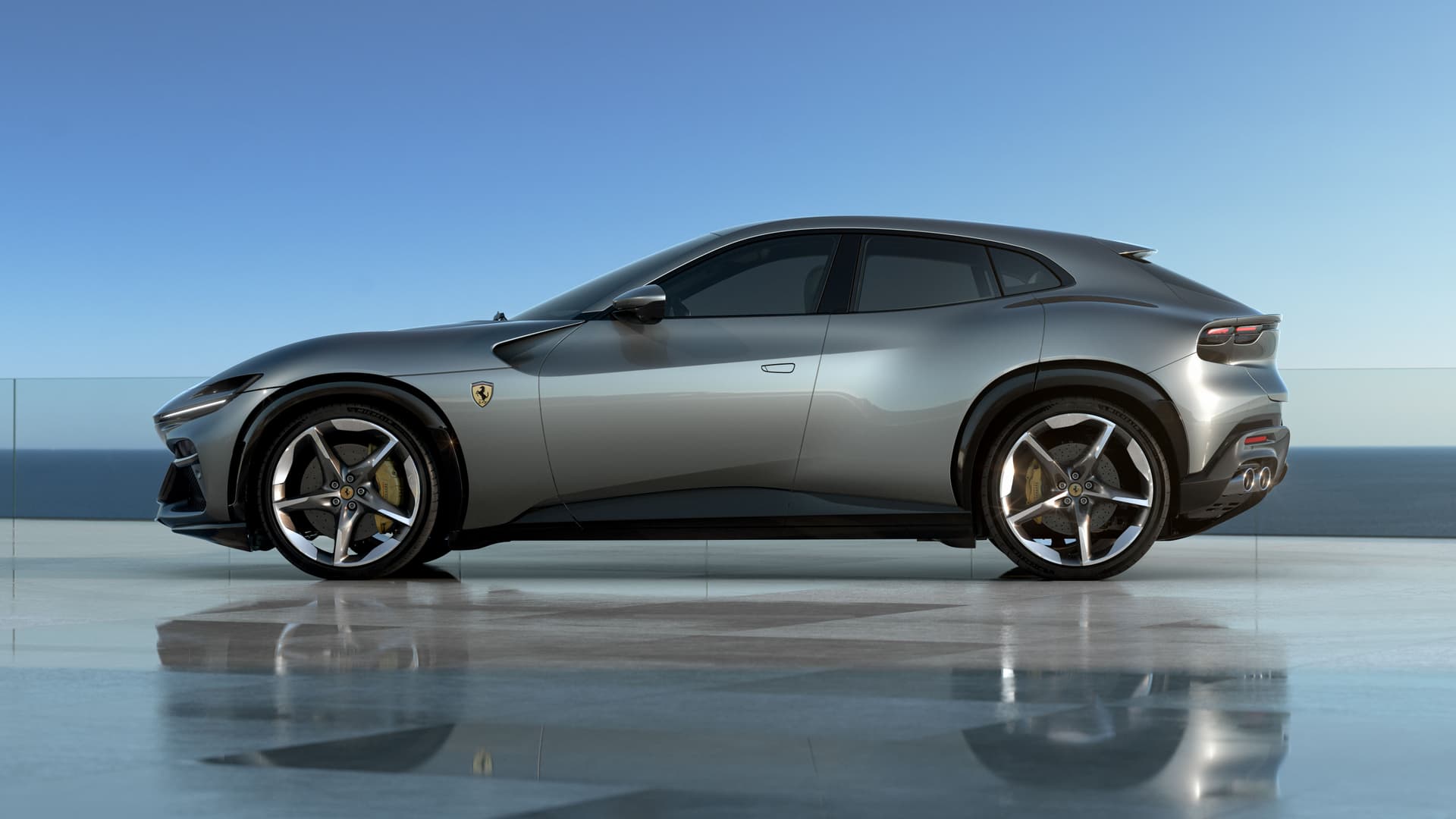 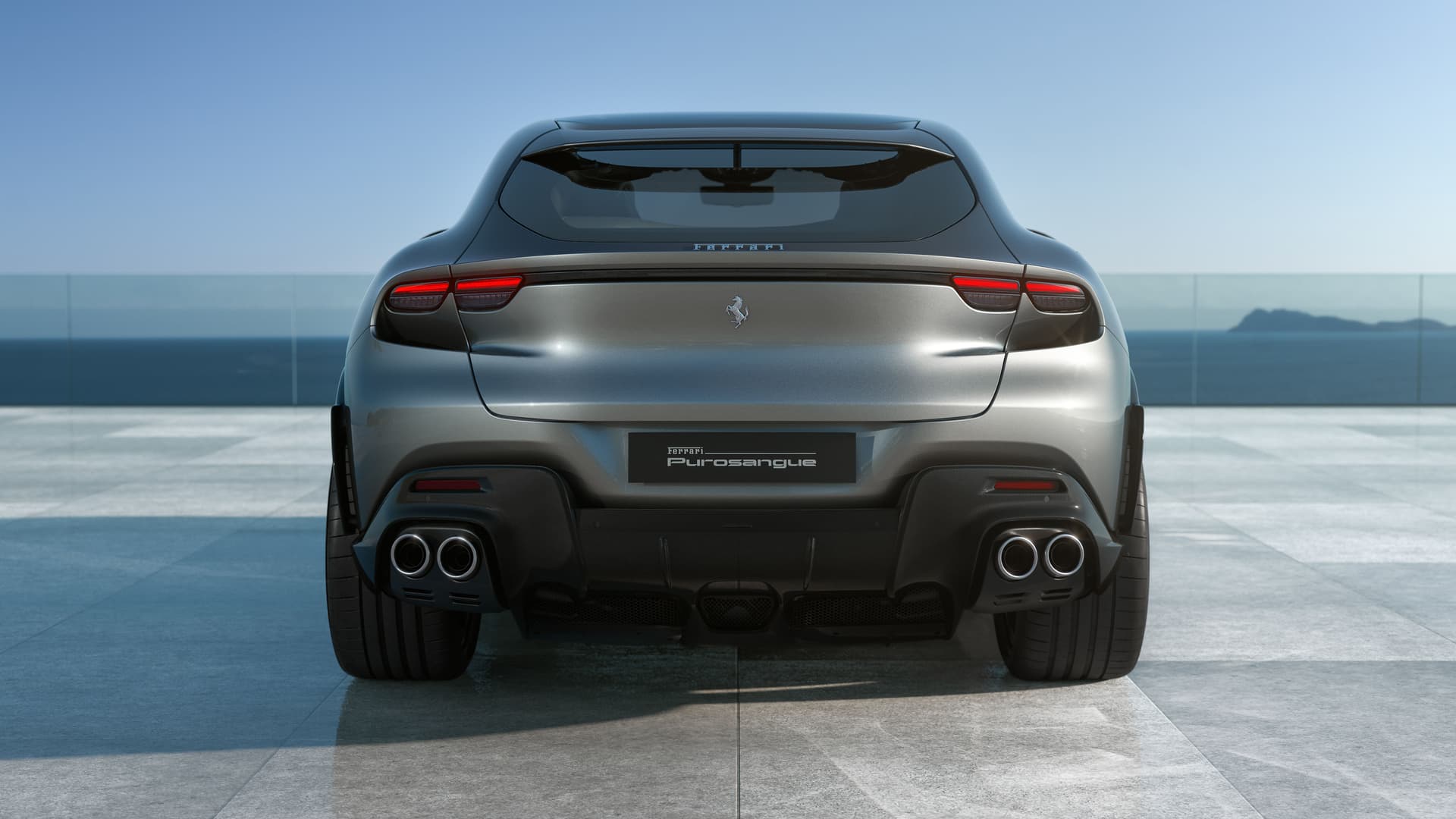 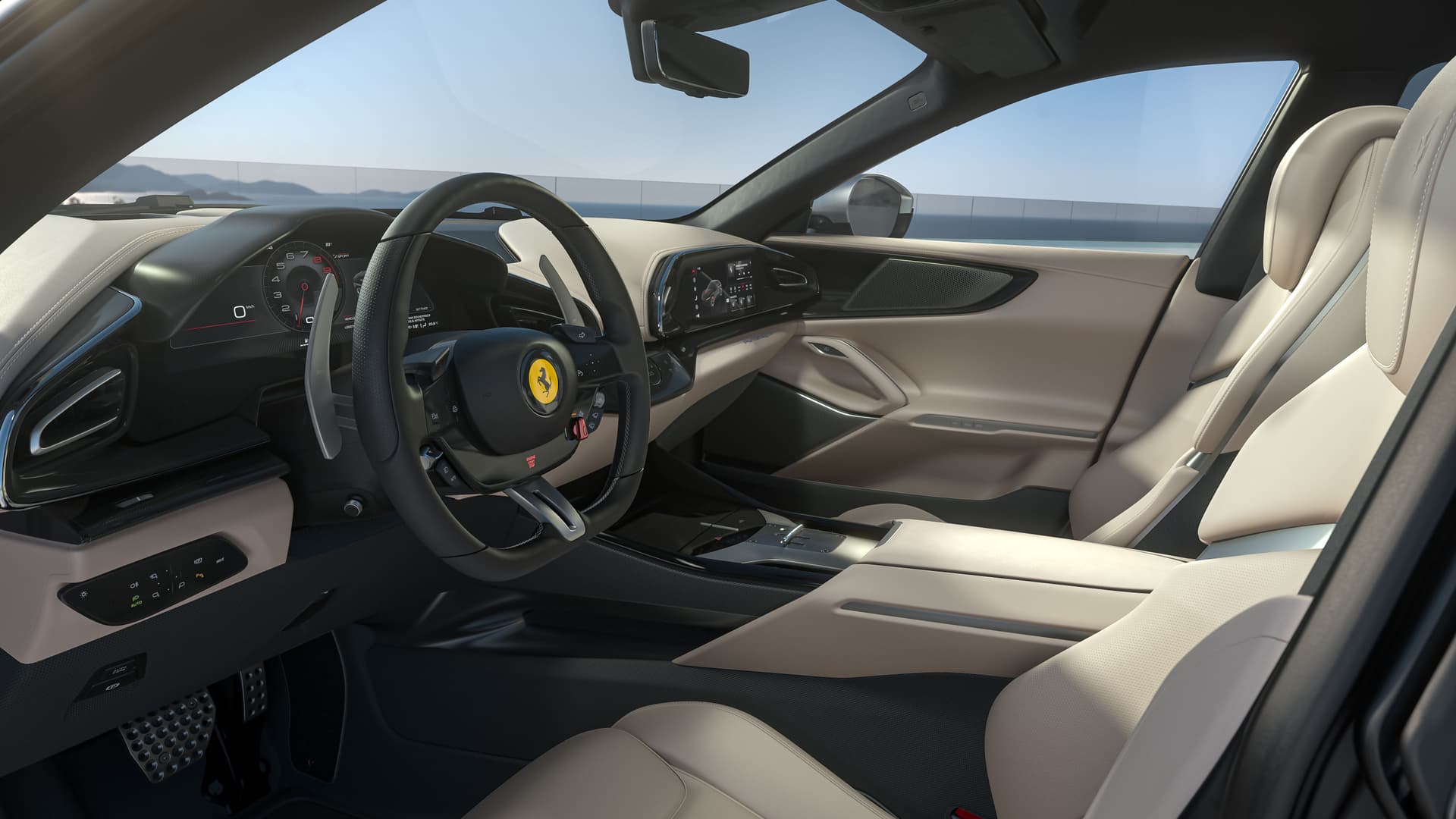 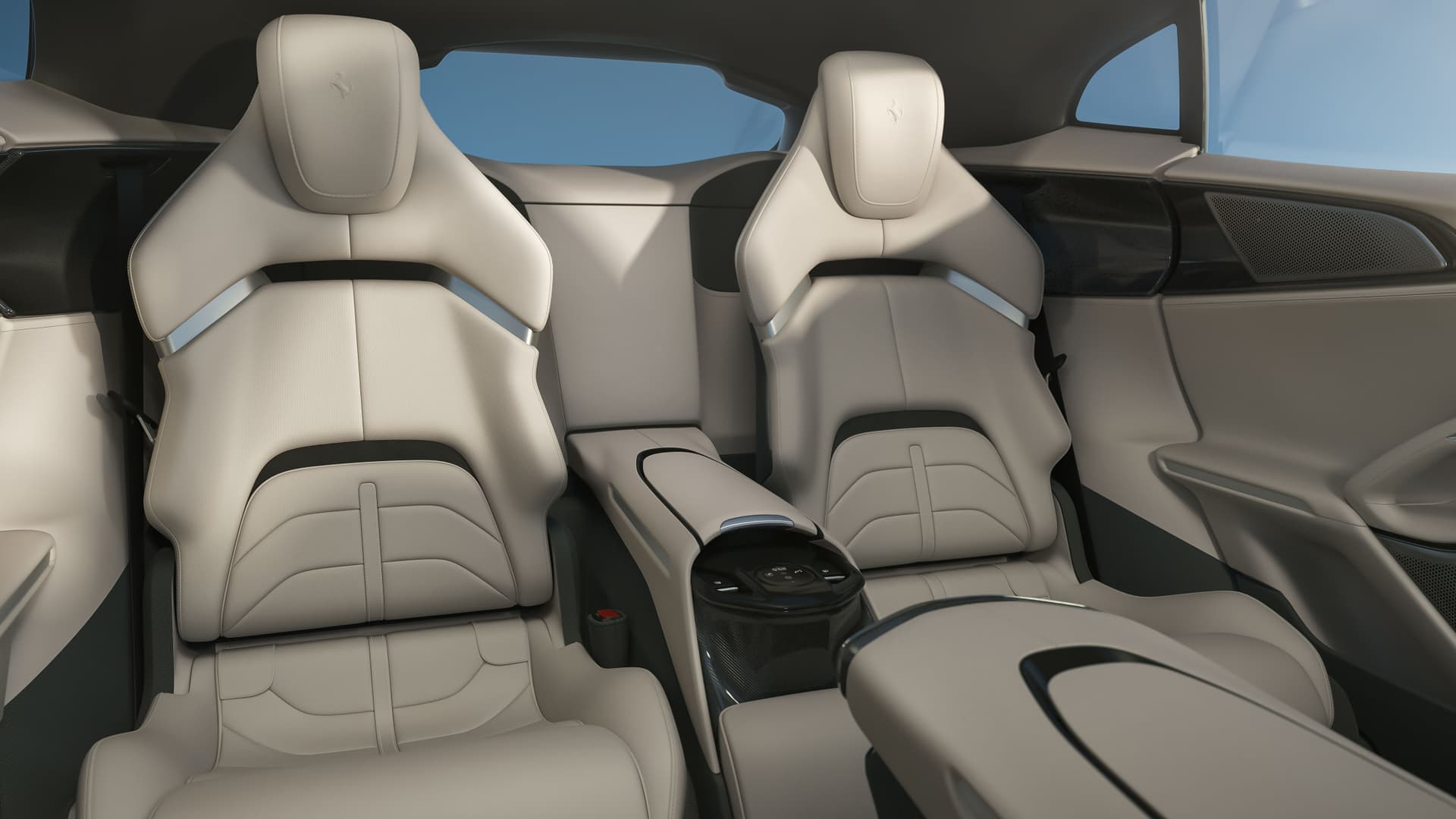 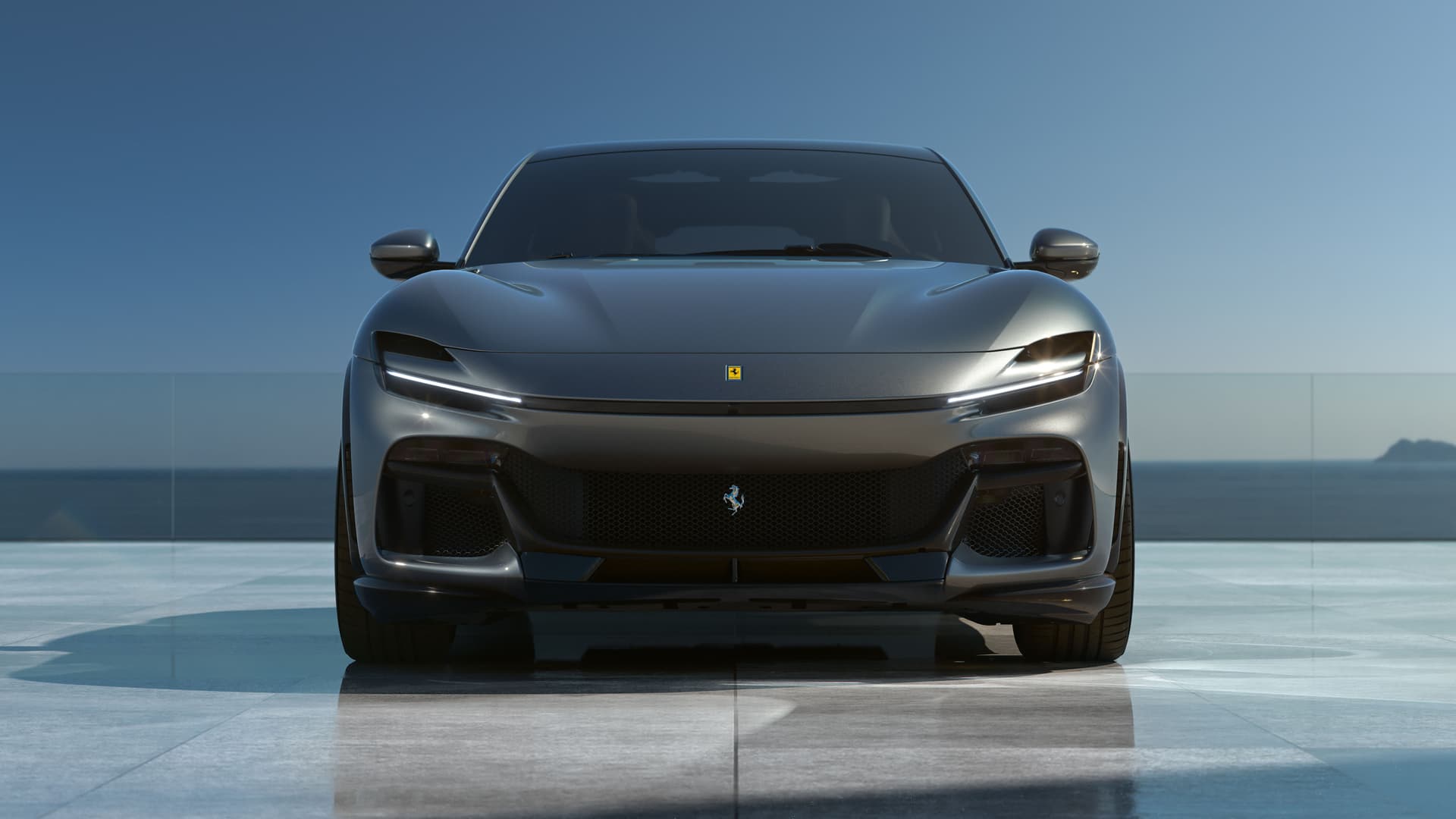 Ferrari said not so long ago it would never build an SUV. So what does that make this newcomer, the Purosangue?

In Ferrari’s words, it’s not an SUV or a crossover – it’s a sportscar.

The first four-door four-seater in Maranello’s history, standing 1,589mm tall. That’s shoulder-to-shoulder with a Hyundai Ioniq 5. A Range Rover will tower over this like an oak tree.

While you dwell on the looks, allow us to pick apart the spec and try to work out what the Poor-oh-sang-way (Italian for 'thoroughbred') actually is. Firstly, it’s very powerful, and fast.

Thanks to a 6.5-litre naturally aspirated V12 (F140IA) mounted behind the front axle under that enormous clamshell bonnet, you’ve got a titanic 725hp and 716Nm to enjoy on your way to 8,250rpm.

Like the outgoing GTC4 Lusso – the shooting brake four-seat Ferrari the Purosangue effectively replaces – the engine sends some drive to the front wheels via a miniature transmission on the front axle, and sends the rest down to the back axle via a rear-mounted gearbox.

Handling-wise, it should be a spaceship. The Purosangue rides on 22-inch rims up front and 23-inch whoppers at the rear, clothed in notably low-profile tyres and enveloping ceramic brakes.

It’s got independent rear-wheel steering, like the 812 Competizione, and the steering is extremely quick for that typical modern Ferrari agility – even in a machine that weighs a claimed 2,033kg… when bone dry and with all the carbon lightweight options selected.

Add all the necessary fluids (the fuel tank alone swallows 100 litres) plus a driver and the Purosangue is going to be well on its way to 2.2 tonnes. 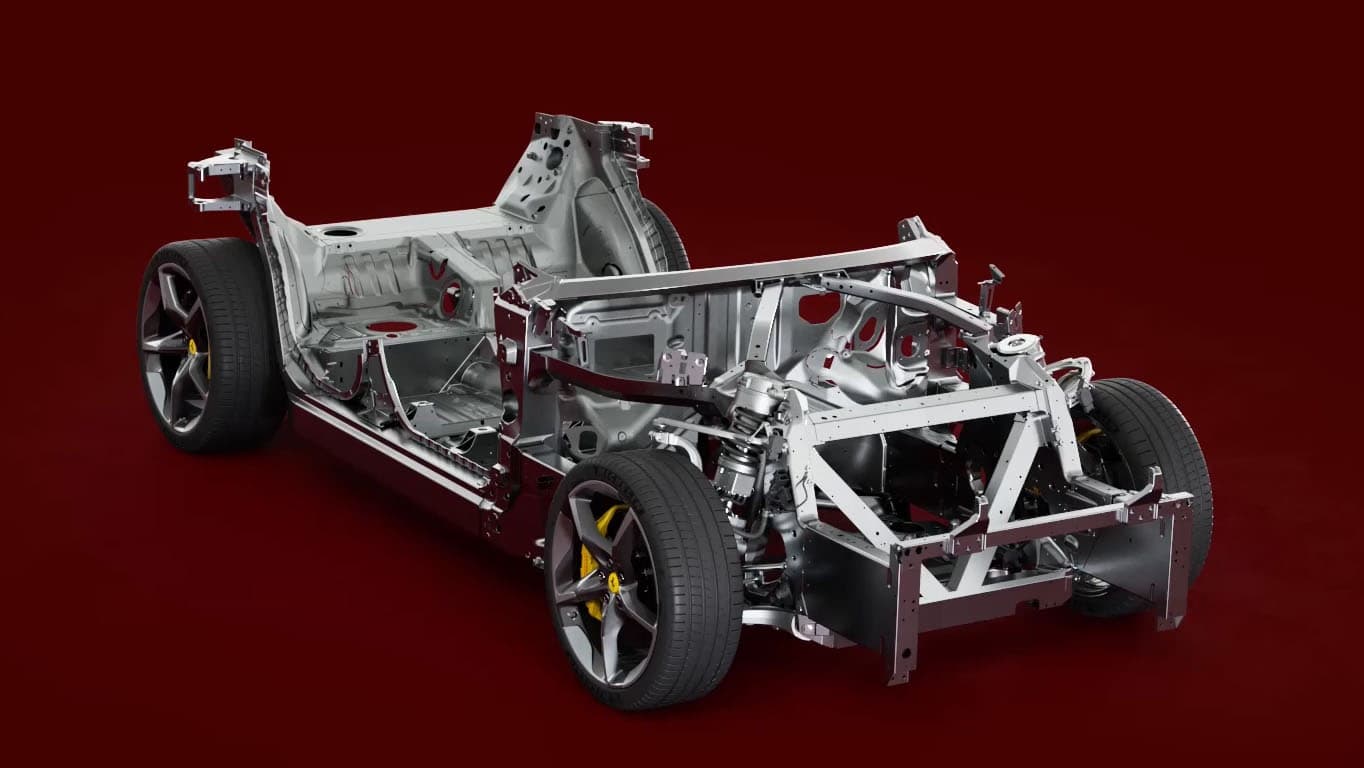 To harness that, Ferrari has invented some very heavy-duty suspension cleverness. It’s taken technology from racecar team Multimatic and developed a fast-reacting electric motor for each shock absorber, which spins up to supply pressure when cornering and counteract the natural body roll. The result should be freakishly flat cornering.

Given the Purosangue is considerably lower than the SUVs we’re used to, with nigh-on perfect weight balance across the axles, plus the inclusion of drift-happy side-slip angle control, advanced grip-predicted traction control and the ABS 'evo' brake-by-wire system first introduced on the 296 GTB, the handling ought to be truly mighty. Hold on tight, family.

Instead of recycling a platform from the Roma or the 812, the Purosangue’s chassis is all new, and a lot stiffer than the GTC4’s structure.

A standard-fit carbonfibre roof lowers the centre of gravity, but you can have a giant glass panel as an option to spoil that.

There’s also much carbon to be lavished on the wheelarches if you like, which are louvred and ducted in an effort to cut drag.

Ferrari doesn’t claim any downforce numbers for the Purosangue and it's being unusually tight-lipped about the Fiorano lap time (although it has confirmed there is one).

What you get instead is new Ferrari territory, in the shape of rear-hinged electric back doors. Very Rolls-Royce.

Inside, seating is strictly for four: Ferrari says it won’t offer a three-seat rear bench, so if you have three children, choose your least favourite to leave behind.

Each row of chairs gets its own climate control system and an electrically adjustable bucket seat.

Up front, the driver’s cockpit looks like a 296 or SF90, but the passenger has a lot more to play with than before, in the shape of a 10.2-inch touchscreen.

One thing you won't get is an inbuilt sat-nav - Ferrari has decided that for the first time ever it'll offer Apple CarPlay and Android Auto as standard, which it says negates the need for a nav. 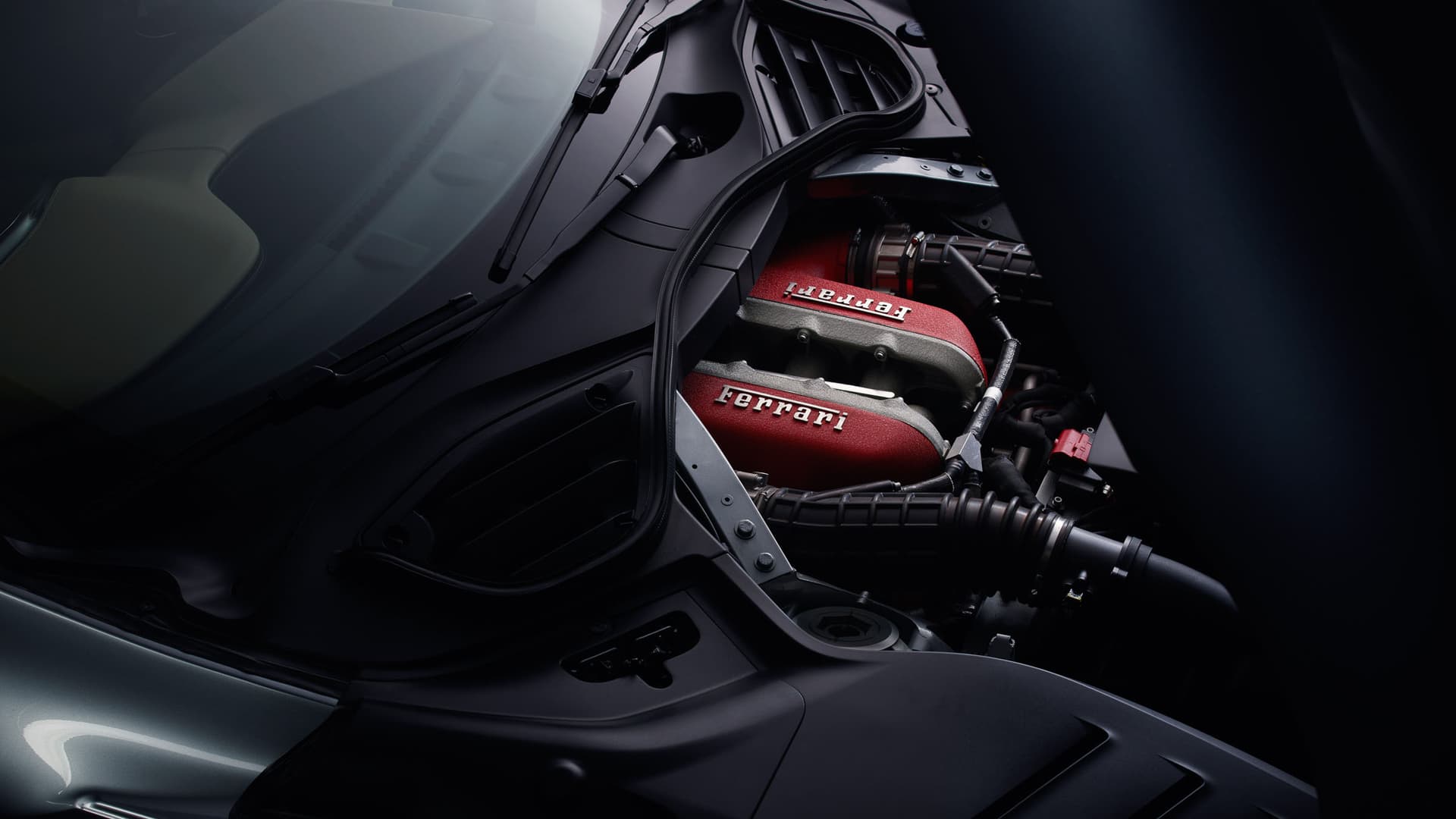 Ferrari makes no note of a hybrid or electric Purosangue either. The passengers sit low, so it’s unlikely there’s much in the way of space to bury a PHEV battery. It’s a V12 or nothing.

But there are nods to sustainability: the launch car has a recycled polyester headlining, the carpet uses fibres from reclaimed fishing nets and there’s ecological Alcantara too.

Meanwhile owners can spec a military-grade bulletproof fibre floor (really) instead of carpet for a more utilitarian feel, and the carbon trim can be optioned with copper wire woven into the texture.

Usually Ferrari doesn’t make much noise about things like a Burmester hi-fi specially tuned to work with the car’s acoustics, or massage seats featuring 10 inflatable cushions. But this isn’t your usual Ferrari.

With a 473-litre boot (a good way shy of the cargo space found in a VW Golf Estate) and only four seats, this five-metre long, two-metre wide monster is not especially practical, it makes no mention of off-roading ability and it’s not going to be cheap to run.

So is it an SUV? Is it a family car? Is it a new form of supercar, offering near Enzo-levels of performance with space for friends?

With prices set to start at €390,000, it’s in Cullinan territory, as opposed to being a rival for a Lamborghini Urus, Aston Martin DBX or Bentley Bentayga. They’re all around half the price.

Ferrari says it’ll cap Purosangue sales at twenty per cent of its total output, so it’ll remain rarer than all the established super-SUVs, and even though you won’t see a right-hand drive one until winter 2023, it’s already selling quicker than Adele tickets.

You’ve got a while to take it all in then. The aggressive face, the muscular haunches. That mountainous dashboard. The sheer wealth of technology on board, and the lunacy of an SUV – or not, as the case may be – powered by a shrieking atmospheric V12.

Anyone care to venture an opinion?