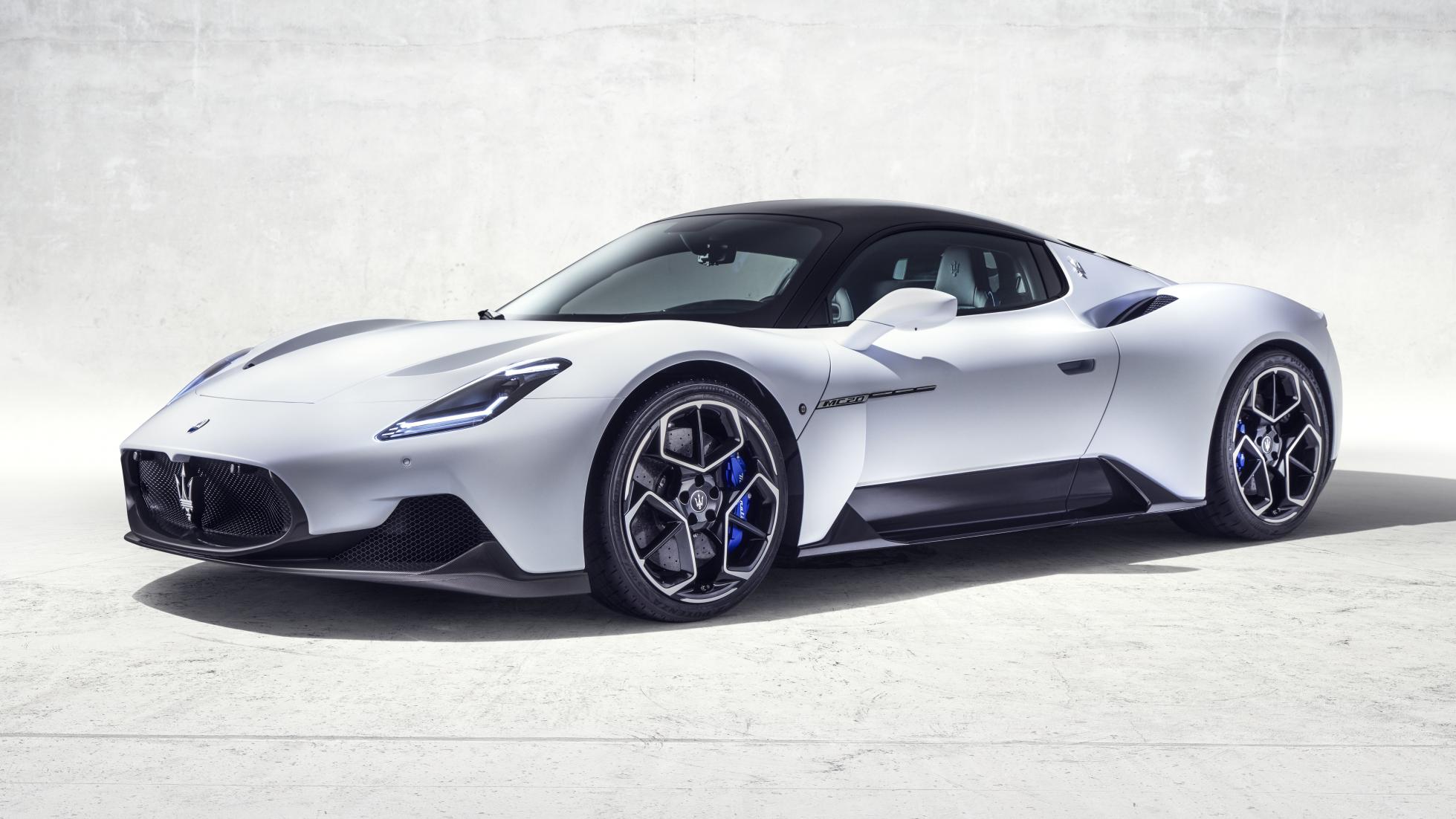 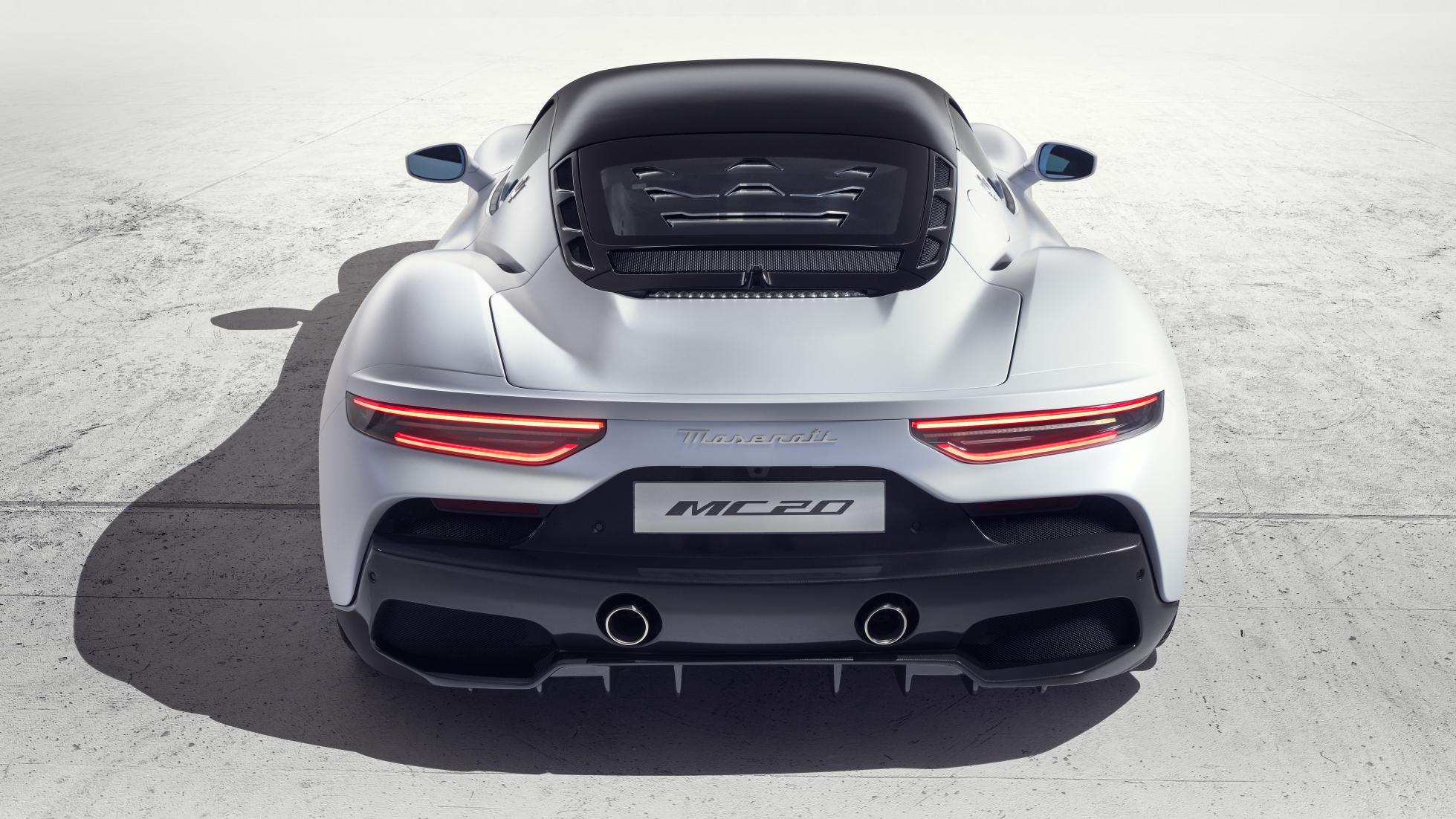 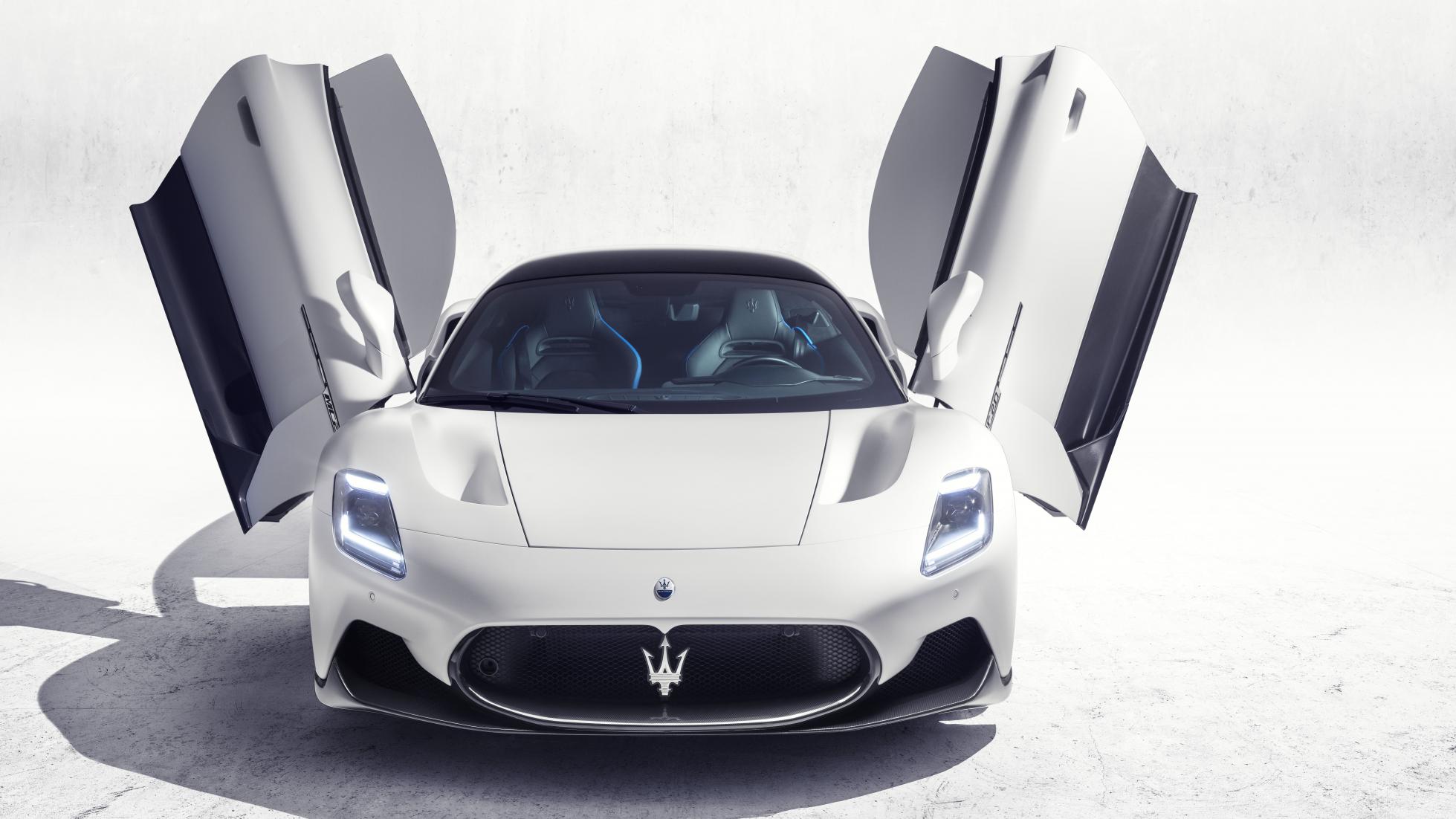 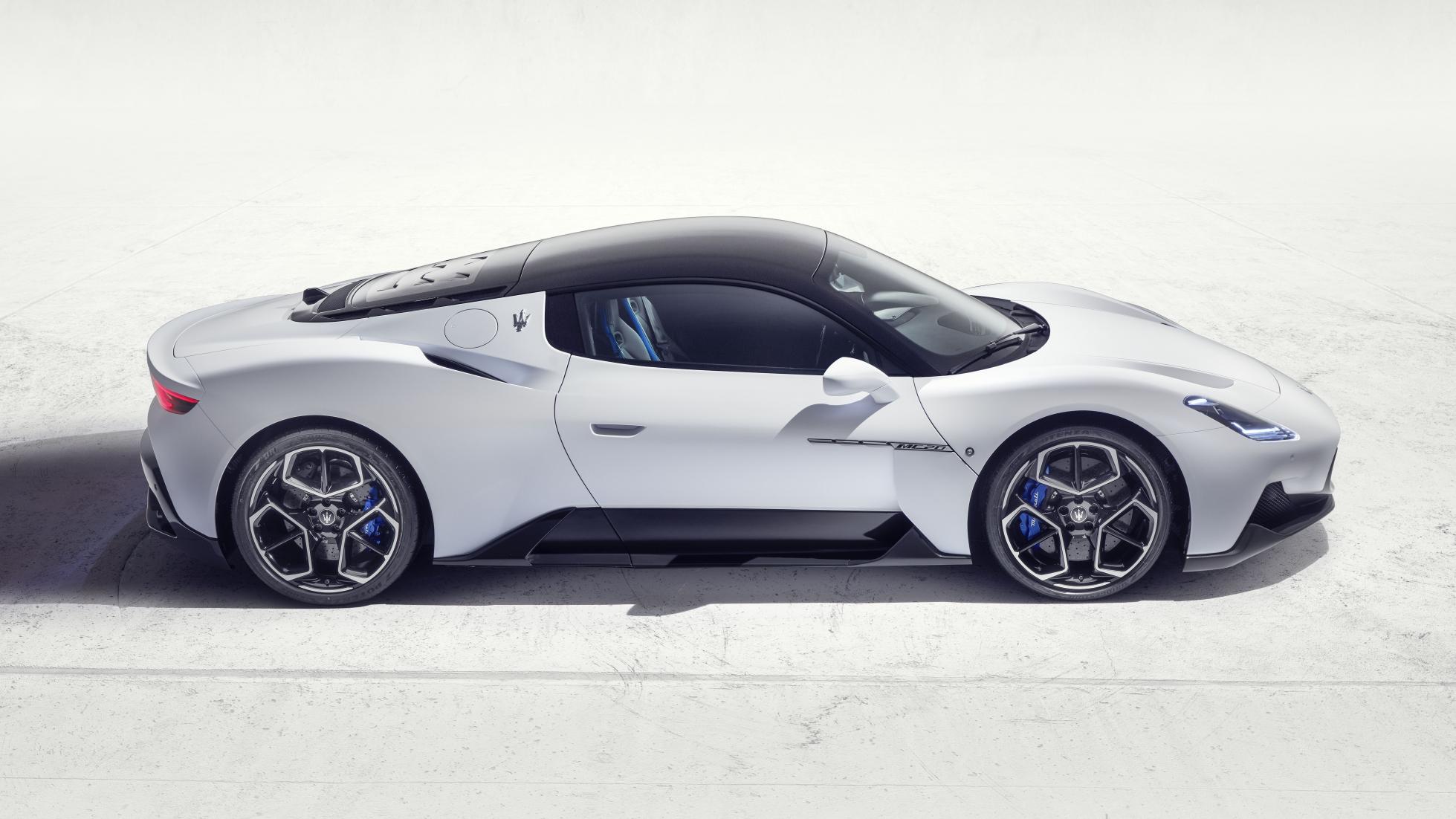 Sigh. Yet another two-seat, mid-engined supercar that snatches 100km/h from rest in under three seconds and tops the 320km/h mark. Butterfly doors, all-carbon construction, an 8spd dual-clutch paddleshift, rear-wheel drive and clever electronics. It will be exclusive, yet bespoke. Track ready, yet a comforting daily driver. Simple, but complex.

The script is getting old, and you’d think in a world increasingly turned on by efficiency and covert consumption, another addition to the supercar ranks would slip quietly into the long night. But this one is made by Maserati. Maserati.

The reason that ears are pricked is mainly because Maserati is still an effortlessly cool brand. If you couldn’t work a Merak or Khamsin into your retro fantasies, then at least there’d be a place for a blocky bi-turbo. Less flash and more cheerful than Ferrari, more characterful than McLaren, lacking the bawdy – but joyful – aggression of a Lamborghini.

Admittedly things have been a little fallow in recent years, the GranTurismo and GranCabrio twins feeling outpaced before their death, the Ghibli and Quattroporte sedans not capturing the imagination like they should.

The Levante may be a decent SUV, but the soul of the company does not live two feet from the floor, have four-wheel drive and seat five plus luggage. Maserati, despite all that, has history and reputation, mystique and back story.

And now, once again, it has a supercar. A supercar called the MC20.

The Maserati Corse 2020, if you’re being expansive, and it marks a big step for the Italian manufacturer. Why? Because it’s a return to hard-edged Maserati, honed in competition, rather than quirky alternatives to largely objectively better cars. It’s an unlimited production supercar built wholly and proudly in Italy by Italians, and set to take on the best.

A car filled with tech, speed and notions of future development, the design already pre-tweaked for Spyder and full electric variants. A serious investment in infrastructure in Modena in uncertain times, a statement of intent.

But first, a closer look at exactly why Maserati thinks it has a chance in the shark-infested waters of two-seat fast things. The design is obviously that of a mid-engined supercar, the forms and volumes of the composite skin constrained by the skeleton and organs beneath, but this isn’t an immediate shock of wings and naked aggression that you might find from other supercar builders.

This is not a spiky silhouette, barnacled with smudges and slashes of aero. It’s a rapier rather than a cleaver

Marco Tencone, the head of Maserati design, says: “We had to be respectful of the Maserati story, but announce the brand in a new way. The temptation was always to over-complicate the car with complexity that is simply not required…

“This is the first time we have approached this architecture, this form,” he says, running his hands over an imaginary curve. “So we needed to the make the integration of the aerodynamic features natural. This means that there is no ‘styling’. This is ‘design’, not styling. One of the hardest things to get right, for instance, was the placement of the engine intake (on the top of the rear wheelarch) – in the wrong place, it gave too much emphasis to the rear wheel; 10mm of change made the whole car look totally different. It’s about detail.”

The challenges remained for any completely clean-sheet design. At the beginning, the team simply threw all the ideas into the pot, then refined the best to create a greatest hits of things they liked.

“During the process, we found that constraints and issues can actually turn out to be opportunities,” says Tencone. “Take the trident vents in the rear screen, for instance. We needed to cool and vent the engine, and this was an effective, yet characterful solution.”

It’s not an explosive design, this. There’ll be endless commentary of what it looks a bit like, simply because of the constraints of the format. But if it’s not a grand entrance to the supercar stage, it is more a polished insinuation. This is not a spiky silhouette, barnacled with smudges and slashes of aero, but a car designed to tease the air apart rather than rend, manage airflow rather than force it. It’s a rapier rather than a cleaver: over two thousand hours in Dallara’s wind tunnel saw to that.

But that doesn’t mean it isn’t effective – the car is essentially layered over itself; the engineering lightly touched by the aesthetic surfaces, yet delivering 100kg of downforce at just 240km/h. 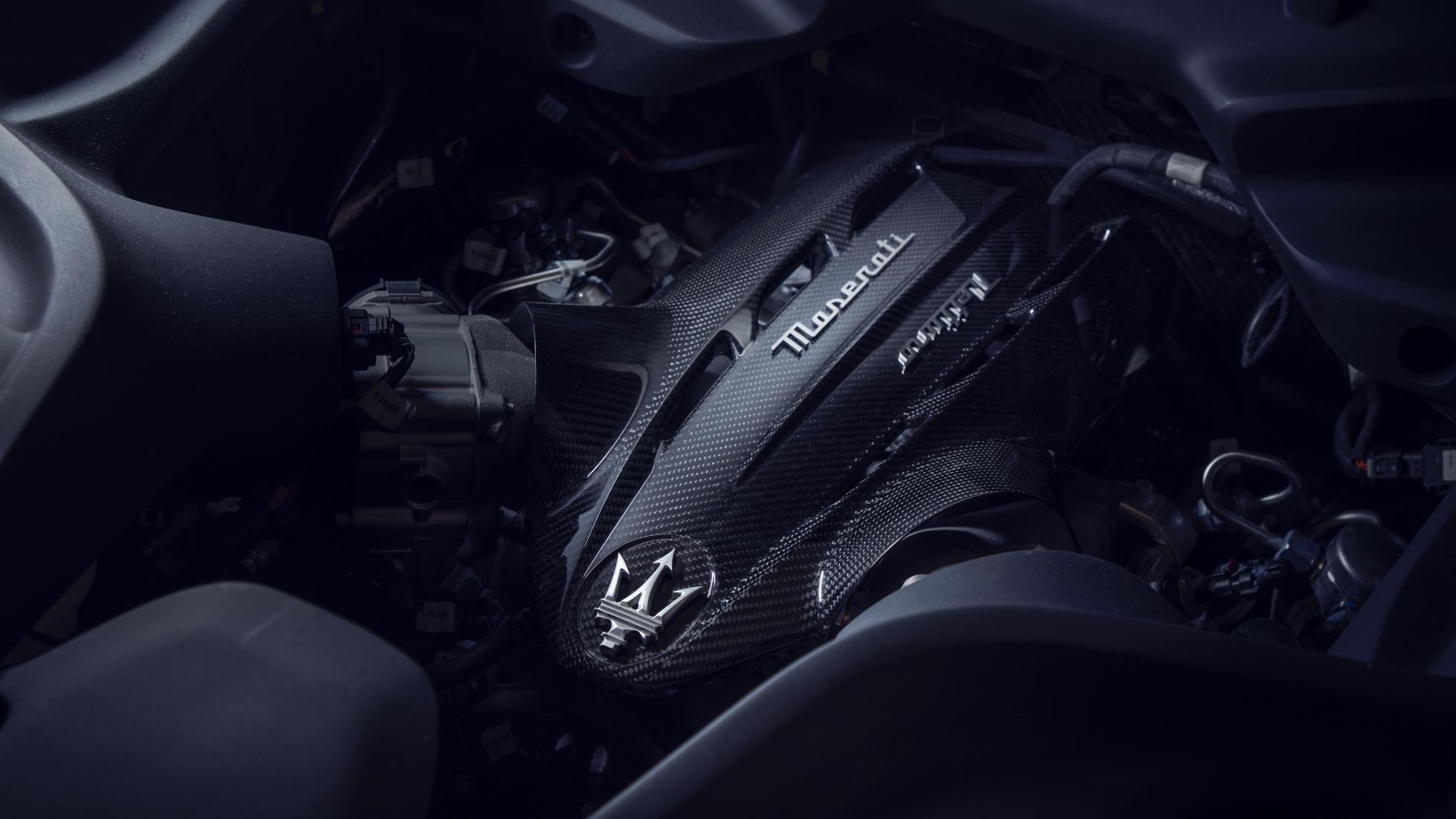 That engine intake Tencone mentions disappears from most angles, the ducts in the bonnet similarly subtle. There’s a completely enclosed flat floor, venting channels aft of the front wheels, a big rear diffuser, a subtle rear spoiler. It’s both technical and organic. Not necessarily ‘pretty’ in the strictest sense, but delicately purposeful.

To make best use of that crafted aerodynamic profile, motivation comes courtesy of an entirely new bi-turbo 3.0-litre V6 mounted very low and centrally in the chassis, birthed from a new and again proudly Italian ‘Innovation Lab’ created for the project.

Called Nettuno, it’s been named as a homage to the statue of Neptune in the eponymous Piazza del Nettuno in Bologna, where Maserati was founded in 1914, and produces prodigious numbers via some patented and surprisingly F1-related trickledown called MTC, or Maserati Twin Combustion.

Now, essentially, MTC is a clever pre-ignition system that allows for more regulated burn throughout the cylinder, giving – quite literally – more bang for your buck. Combining a pre-chamber ignition and a second spark plug, the system can choose to use one or the other, or both, depending on engine load. Cue more efficiency or output, depending on what the driver demands, without resorting to valve timing or strange cam profiles.

It’s certainly got guts: power should be around 630hp at a lively 7,500rpm, with the engine redlined at 8k. Turbos enable a swollen torque curve of 730Nm, and, with a specific output of over 200hp per litre, this sounds like a very serious V6. And it’s also a V6 that plonks itself directly in supercar V8 territory.

Harnessing all that is an eight-speed dual clutch paddleshift with what are essentially six fun gears and a pair of overdrives to give some measure of cruising efficiency. Brembo carbon ceramic brakes are standard behind 20-inch forged wheels, and linking them are traditional double-wishbones with ‘virtual’ elements – basically an independent steering axis which allows Maserati to unlink the camber angle setting and the king pin angle.

An expensive system more commonly seen on racing cars, because you can keep a more constant contact patch all the way through a corner. Suffice to say, it should handle.

Maserati also claims that the MC20 is lighter than the competition, but at 1,470kg, the 488 GTB is only 5kg heavier (less with lightweight options), and the McLaren 600LT at 1,356kg somewhat skinnier. But Maserati maintains that the MC20 is something different, so there’s probably an argument to be had. In Italian, with lots of arm gestures. 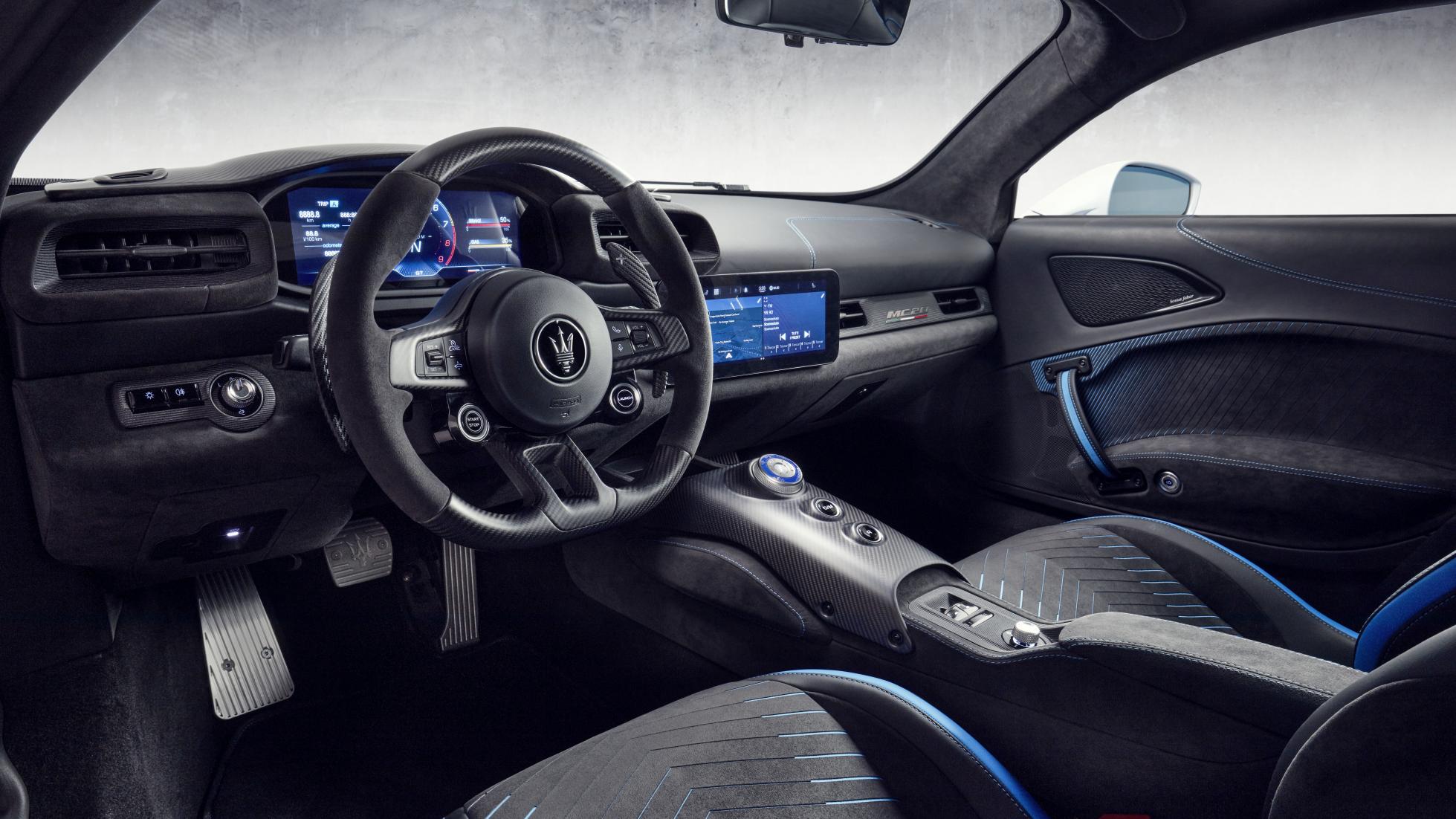 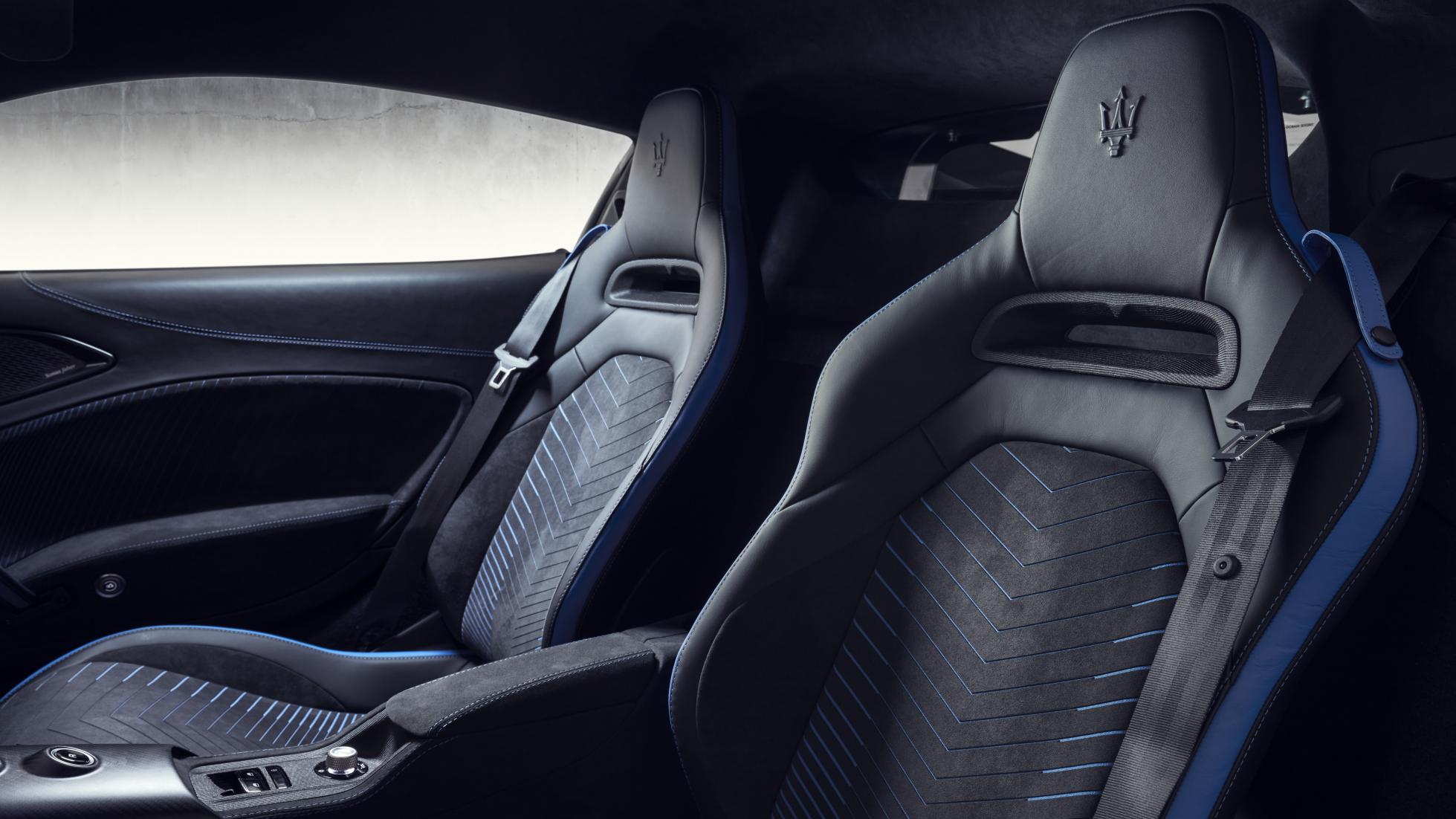 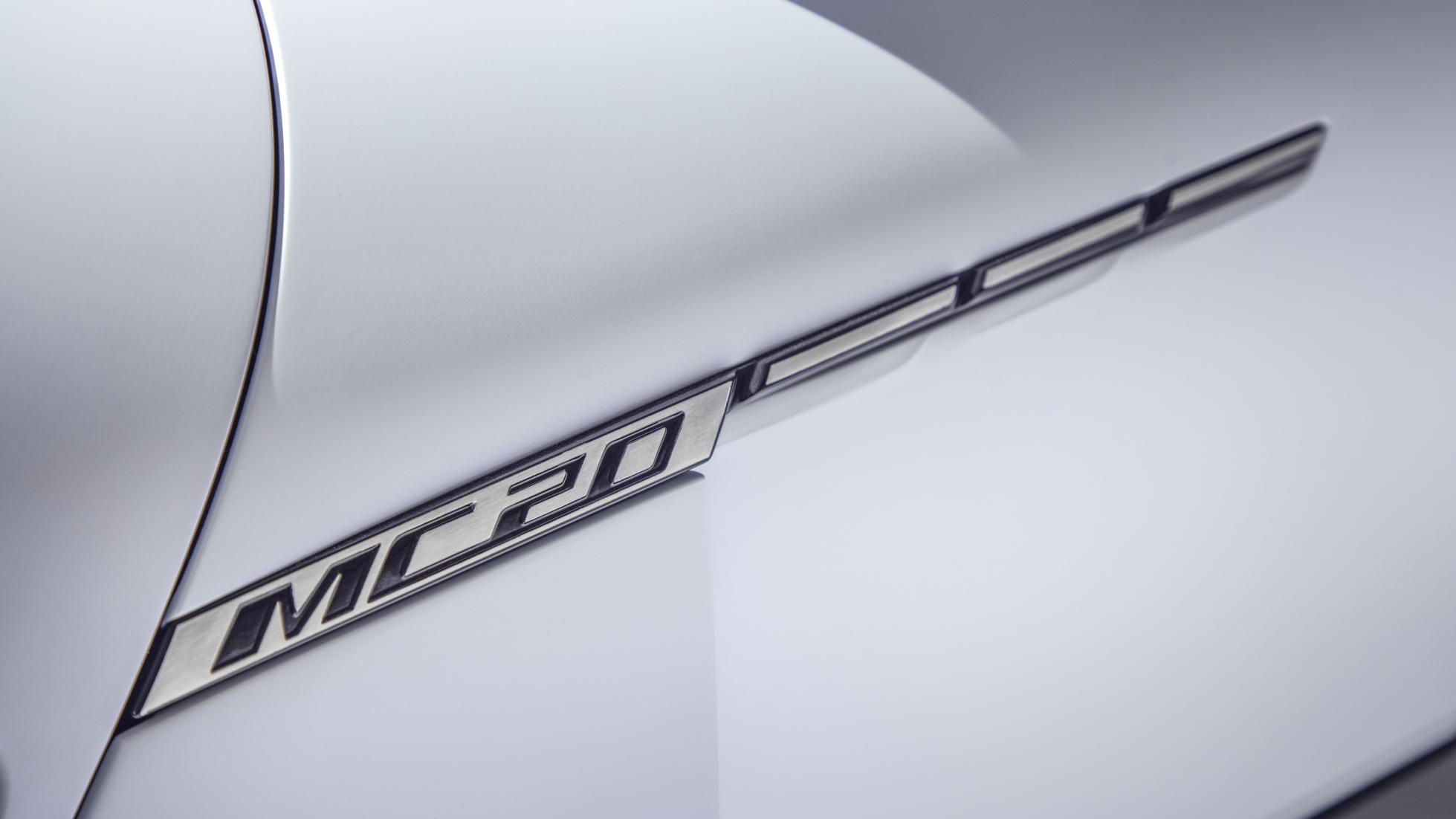 Inside, it’s a lesson in understatement, the two modest 10.25-inch screens centred on the driver, the ceramic drive-mode selector mounted on the central tunnel. You’ll be able to choose from four modes (Wet, GT, Sport, Corsa) as well as full ESC off abandon-all-hope mode, shortcuts to different strategies for all the obvious stuff like engine map, pedal sensitivity, suspension firmness, exhaust valves and the like.

There’s also an app, remote maintenance and software updates, and the car will email you with a monthly health status. Which might guilt owners into driving their cars more, if nothing else.

Materials, as you might expect, seem top-notch, the seats gracious and pretty – and all carbon-backed. There are optional Corsa full carbon seats, a 12-speaker Sonus Faber sound system (you guessed it, another Italian company) and a new set of six colours especially for the MC20, ranging from subtle grey (Grigio Mistero) through dark blue with a yellowish flip (Giallo Genio), to a kind of marble white (Bianco Audace). There’s also red, black and blue.

The elements seem to add up. Technology and craftsmanship, beauty and function. What Maserati calls ‘sartorial engineering’.

But there’s pressure and expectation here. Much like Alfa, car people seem to root for Maserati – they want the cars to be good. But you have to be wary that the weight of expectation doesn’t become stifling pressure; this car has to match up to the promise.

Yet another two seat, mid-engined supercar? Not this time. Because while all Maseratis are super cars, not all supercars are Maseratis. 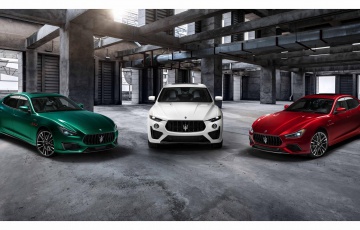 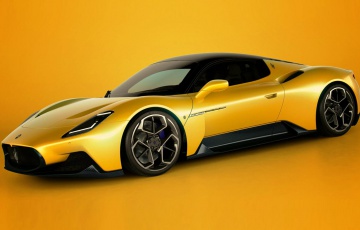 Is the Maserati MC20 better with a bit of colour? 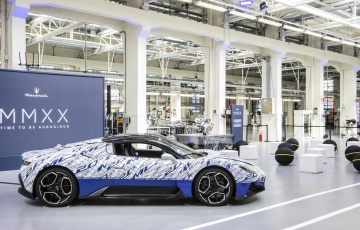 Maserati is back, and this is the Big Shiny Plan

Yes, we've been here before - can the storied Italian carmaker pull it off this time?