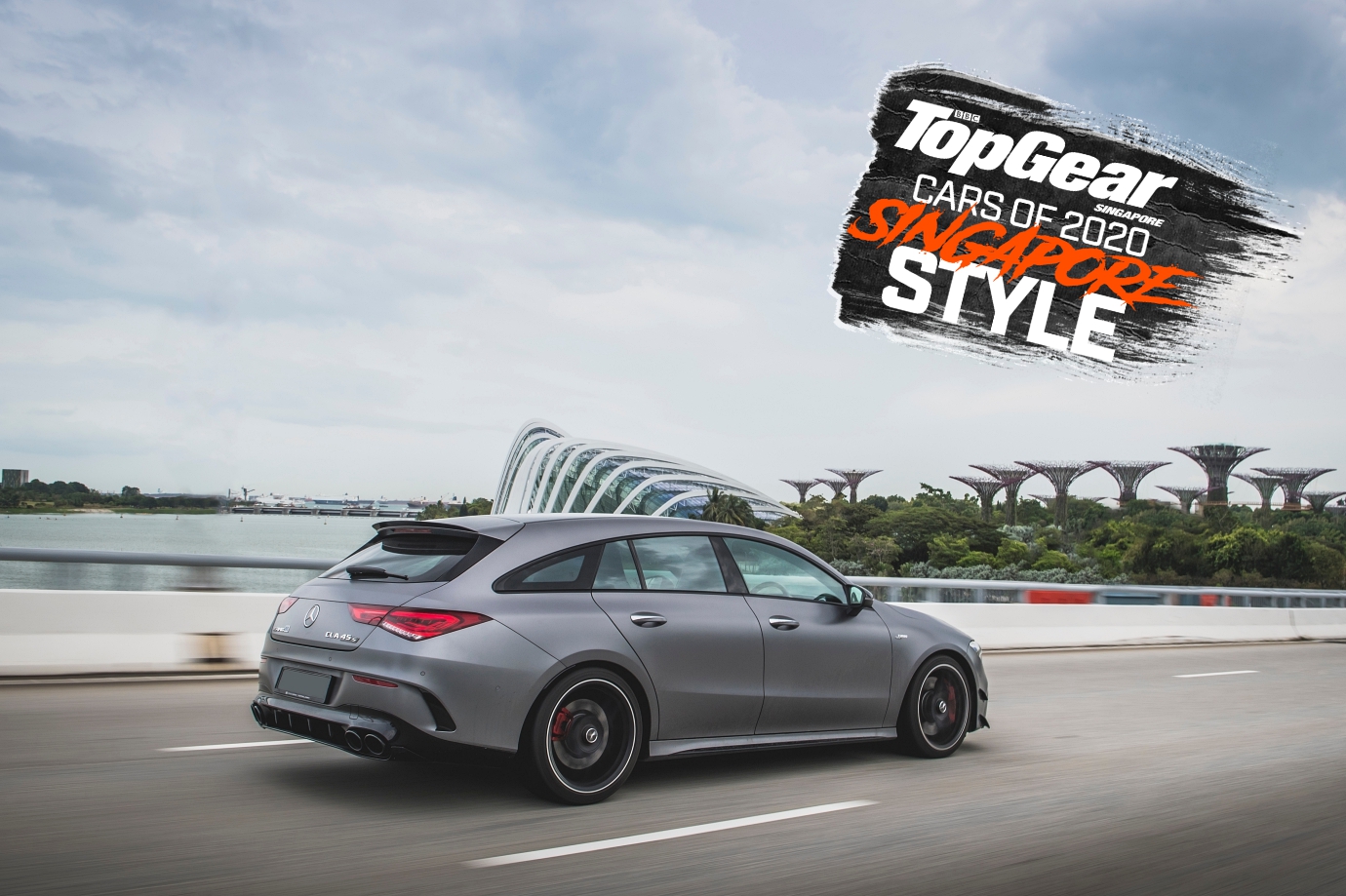 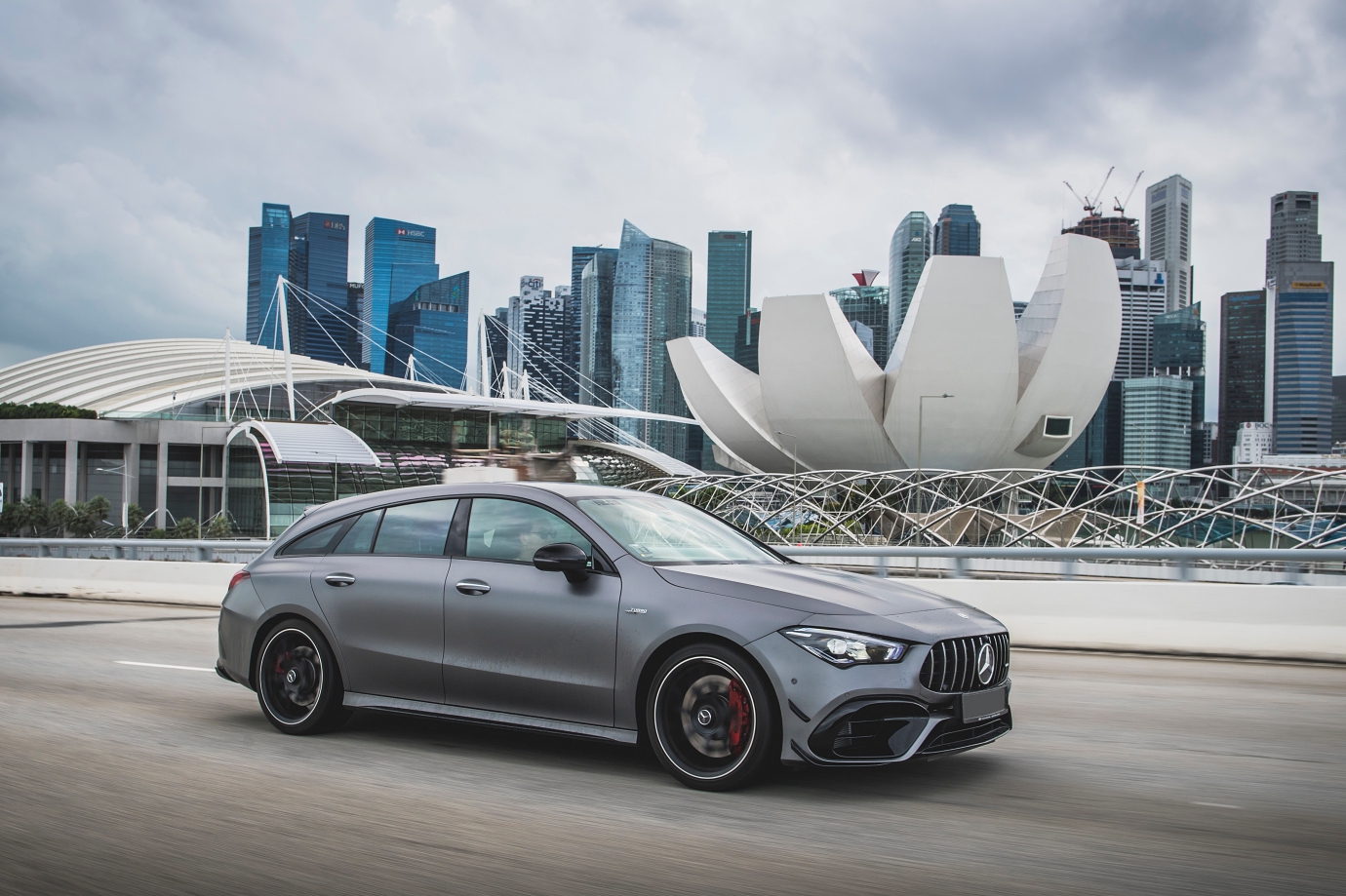 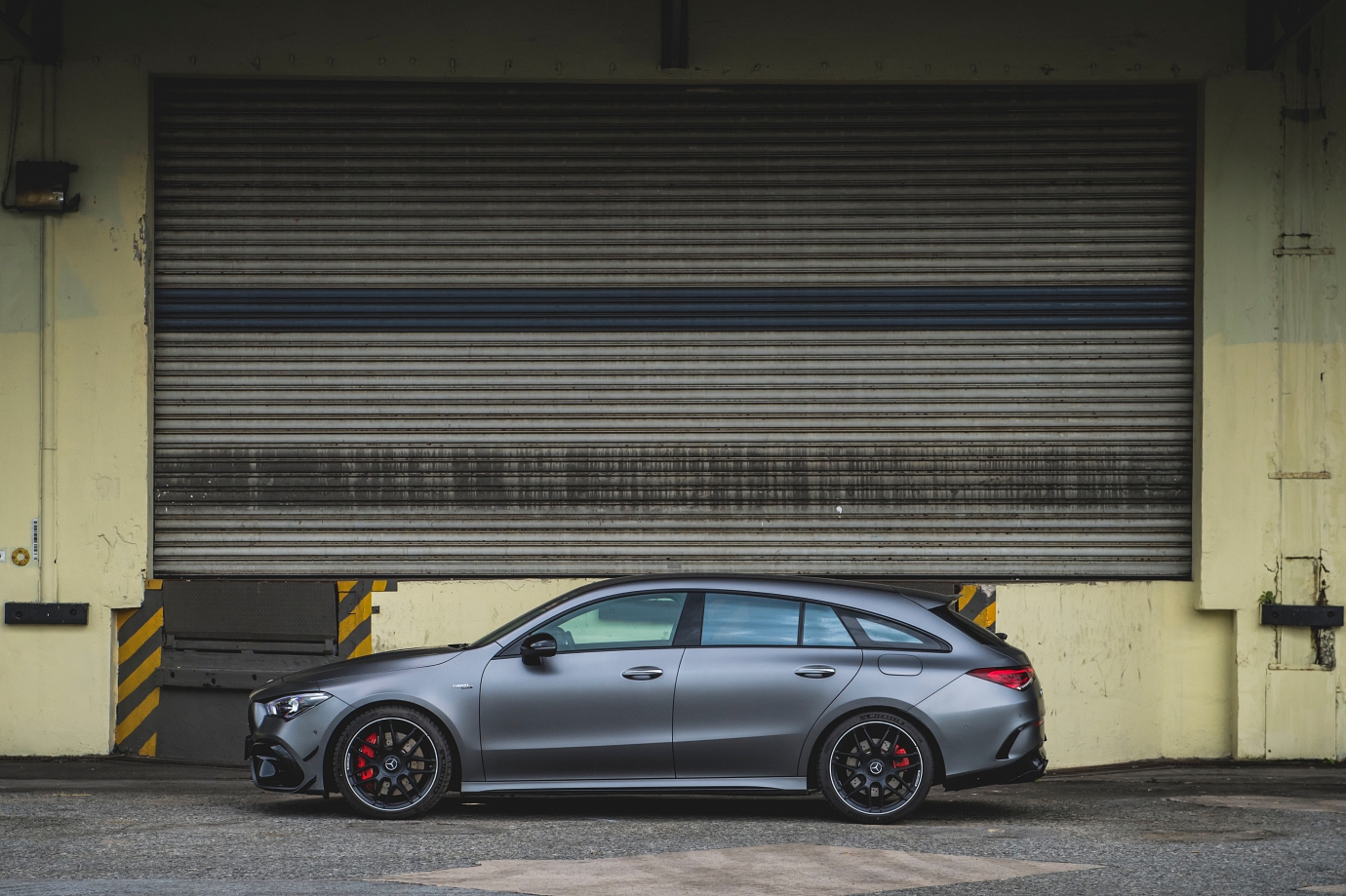 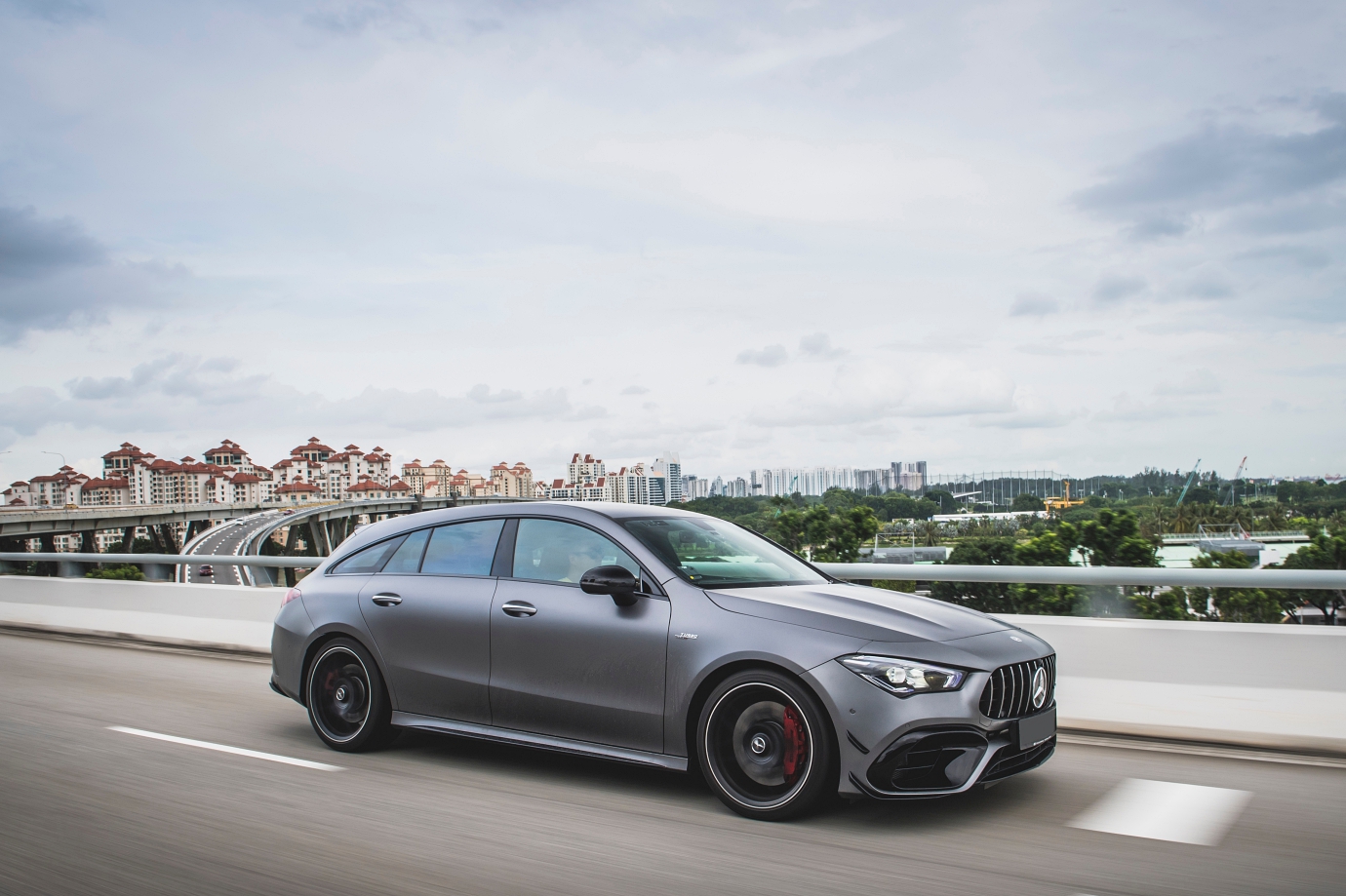 Singapore - The approaching roar of a sports exhaust reverberating in the tunnel snaps heads around in anticipation of a flashy sportscar about to make its appearance.

All eyes are peeled as the sound rises to a crescendo, and there’s some consternation as we drive into view in the CLA 45 S Shooting Brake.

We’re only paid a cursory glance, before the attention shifts back to the tunnel opening, probably because they didn’t think the Shooting Brake looked sus enough to have been raising all that ruckus!

The other fast wagon rep in our 2020 Cars of the Year is the muscle-bound Audi RS 6 Avant, which is very clear in its design brief to be more beast than beast of burden, so there’s little doubt as to its performance credentials, nor the fact that it has serious firepower to back up its looks.

On the other hand, our Designo Grey Magno CLA 45 S Shooting Brake requires the eagle-eyes of an anorak to spot, because true to AMG form, the giveaways are subtle rather than LOOK-AT-ME. 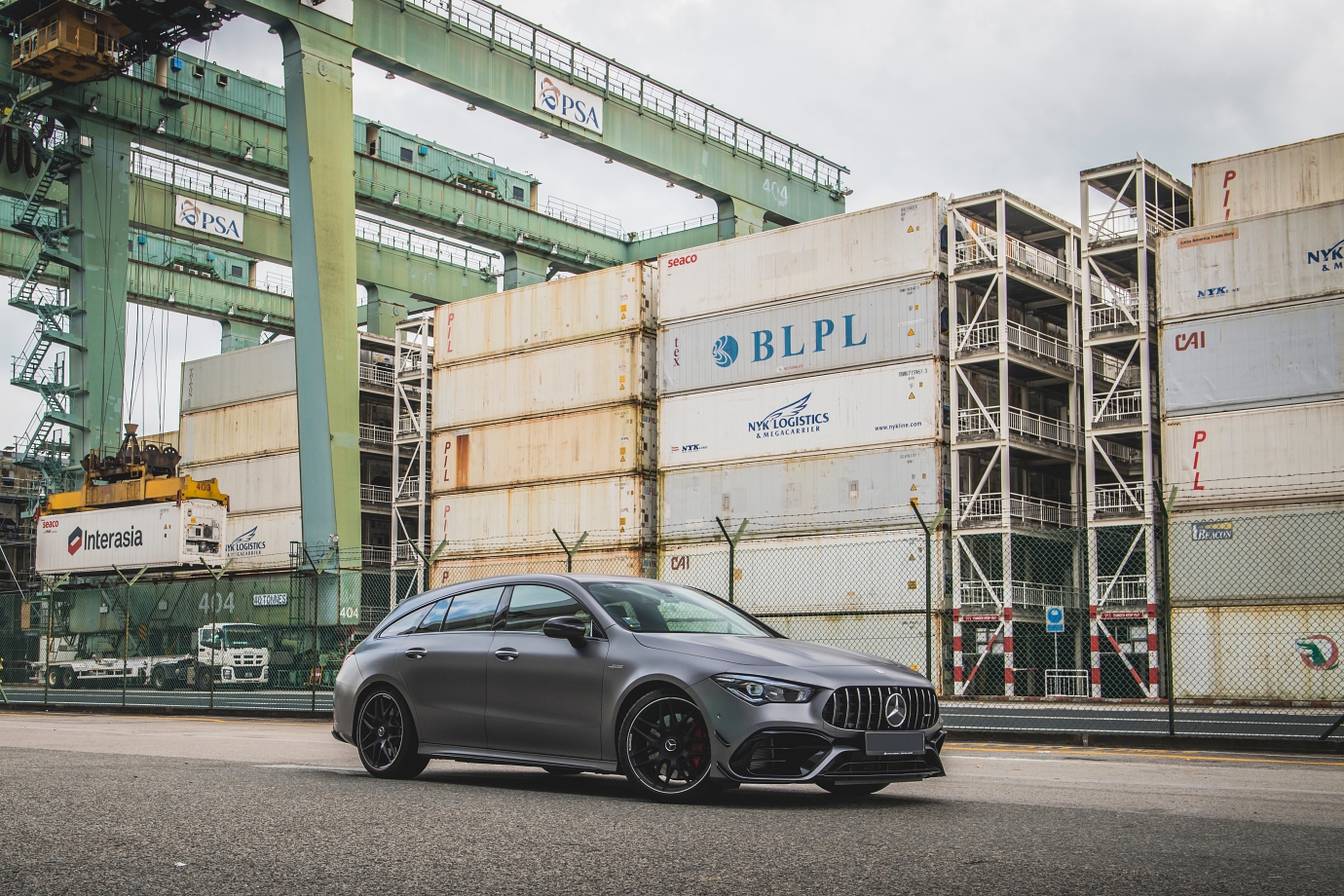 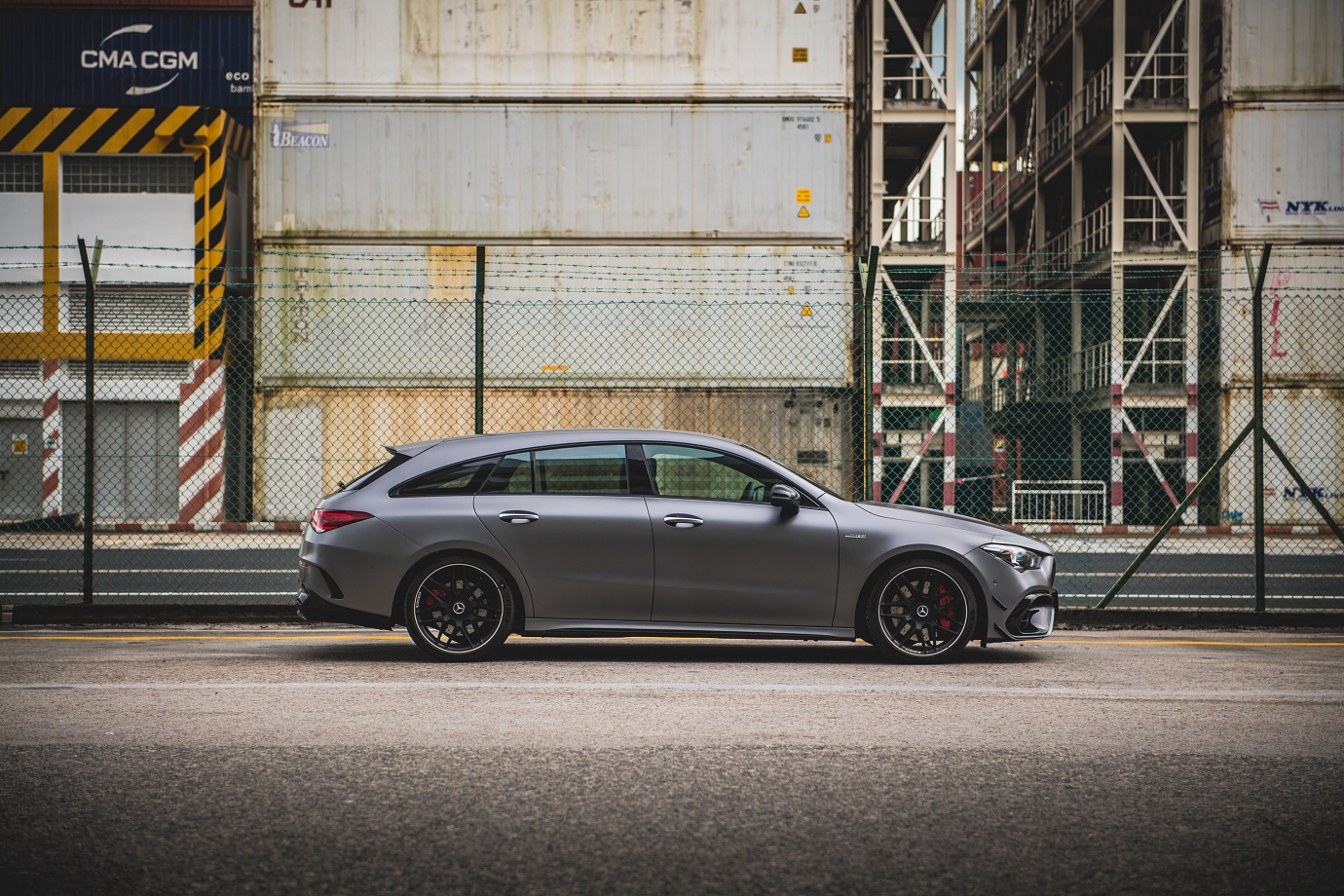 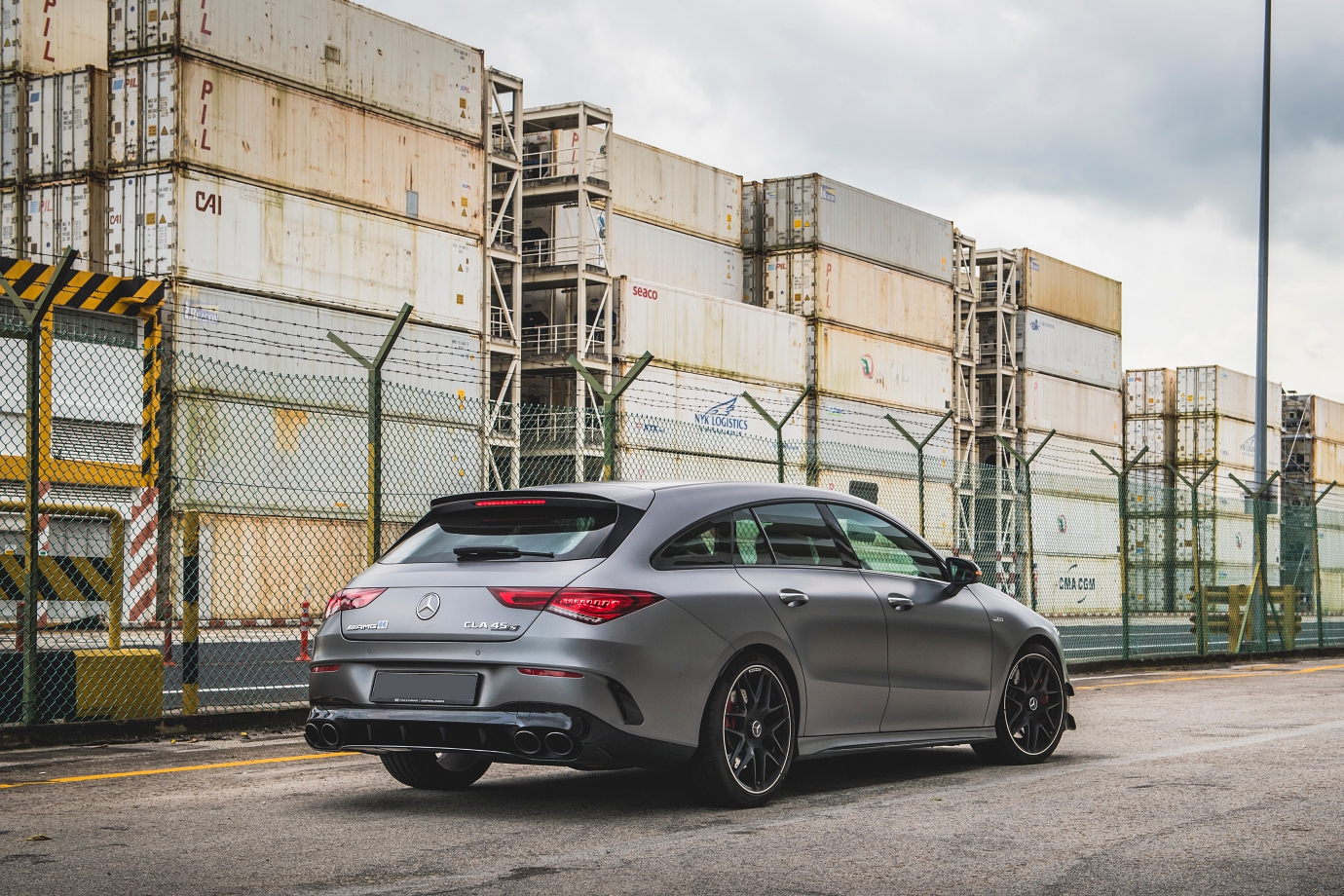 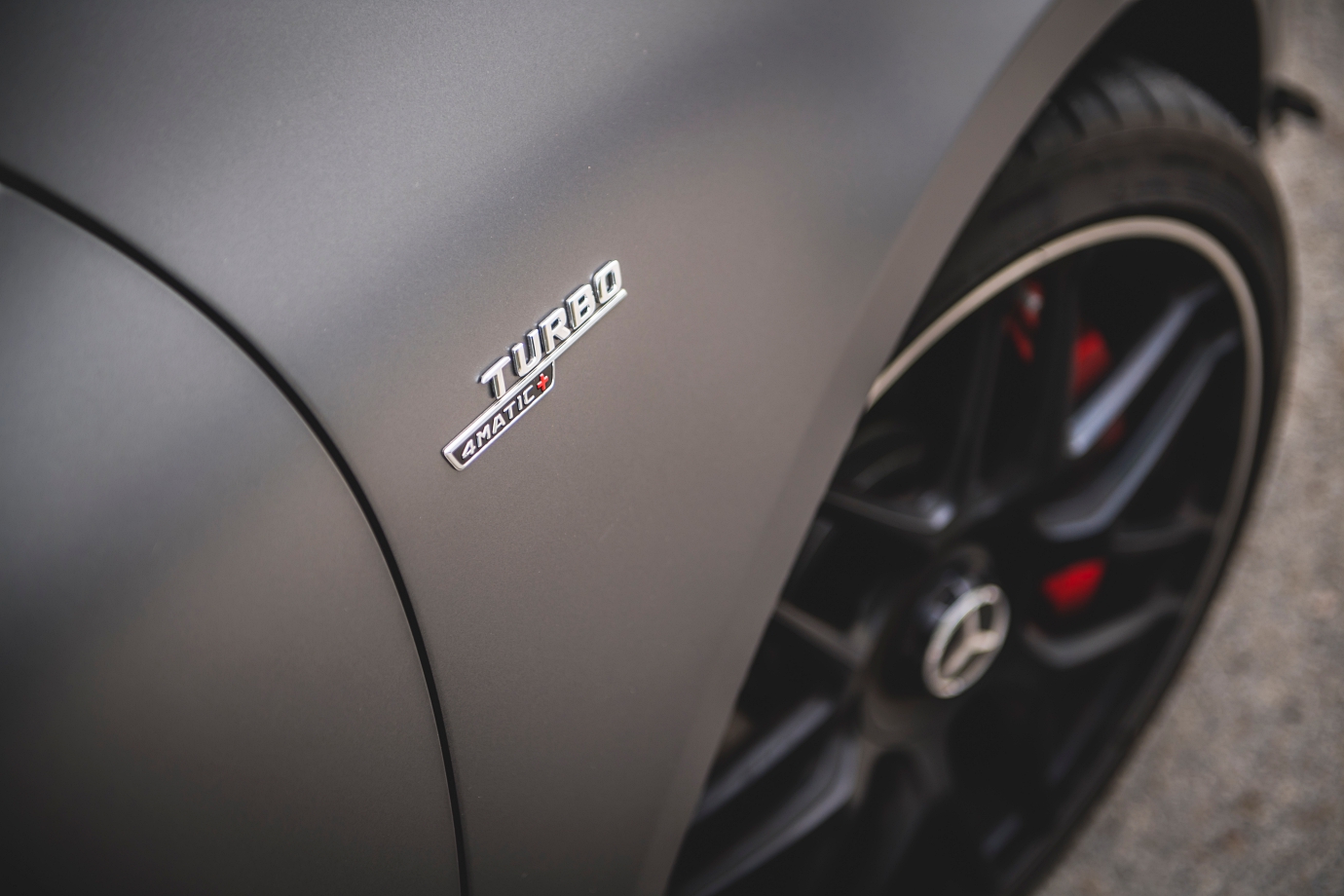 It gets the distinctive AMG radiator grille with vertical slats, wider front wings, flared wheel arches, flicks on either side of the front bumper edge and outer air-intakes that are reminiscent of the AMG GT 4-door Coupe’s. From the rear, it gets dual-twin-tailpipes from beneath the wide rear apron.

This particular car has also been spec’d with the optional BBS alloy rims, which perfectly suit the Shooting Brake’s athletic form and gives it an added sense of motorsports purpose. Again, it’s not visually loud, just stealthy, svelte and slinky as it prowls the streets in search of prey.

The fully-digital cabin features the ‘widescreen cockpit’ with dual high-res screens, while the seats and door-cards are finished in a racy red/black combination.

Like Ferrari, AMG has shifted all the major drive-related controls to the multifunction sports steering wheel so your hands won’t have to leave the steering wheel on the move – there’s a rotating knob to toggle between drive modes and dedicated buttons for the exhaust and auto start/stop. 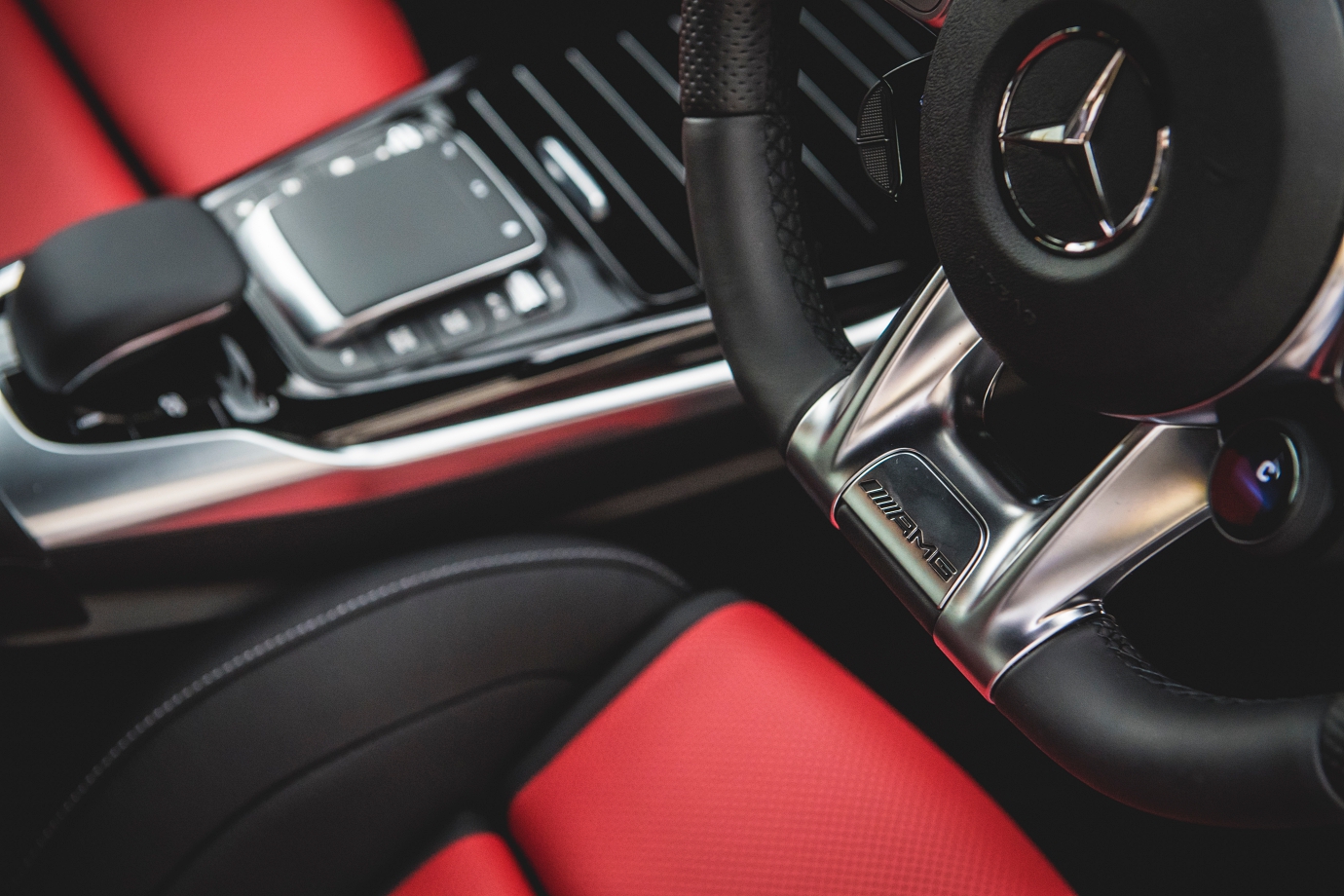 Confession time: the first iteration of the A/CLA/GLA 45 models left me cold. They made a huge amount of noise on the move and were great as long as the going was straight, but the 4Matic seemed to grapple with the corners, as it felt like it was led around by the front wheels and never felt natural and fluid like a sportscar should.

They felt too much like the compact ‘hotted-up’ hatchbacks/crossover/coupes you’d expect from some of the other brands, and some critics had difficulty relating them to the legendary ‘AMG’ name.

Hang on, hear us out first before getting into a snit. Don’t forget, BMW and Audi have respectively, the ‘M Performance Automobiles’ and ‘S’ diffusion range of sporty cars, which sit below the full-fat M and RS models, so they’re able to ‘experiment’ a little more with those cars because they don’t affect the reputation of the high-performance models.

On the other hand, Mercedes-Benz’s strategy has been to park everything ‘sporty’ under the ‘AMG’ umbrella, which is so broad today it includes everything from the 35, 45, 43, 53, 63 et al, to the GT, GT 4-door, and even the One hypercar.

Of course, you could argue the last three models are bespoke AMG products (like the sadly discontinued gull-winged SLS), but to the average onlooker, “same-same lah”. This makes it all the more critical to have compelling products at every level of the AMG hierarchy, simply because from highest to lowest, they all represent the “World’s Fastest Family”! 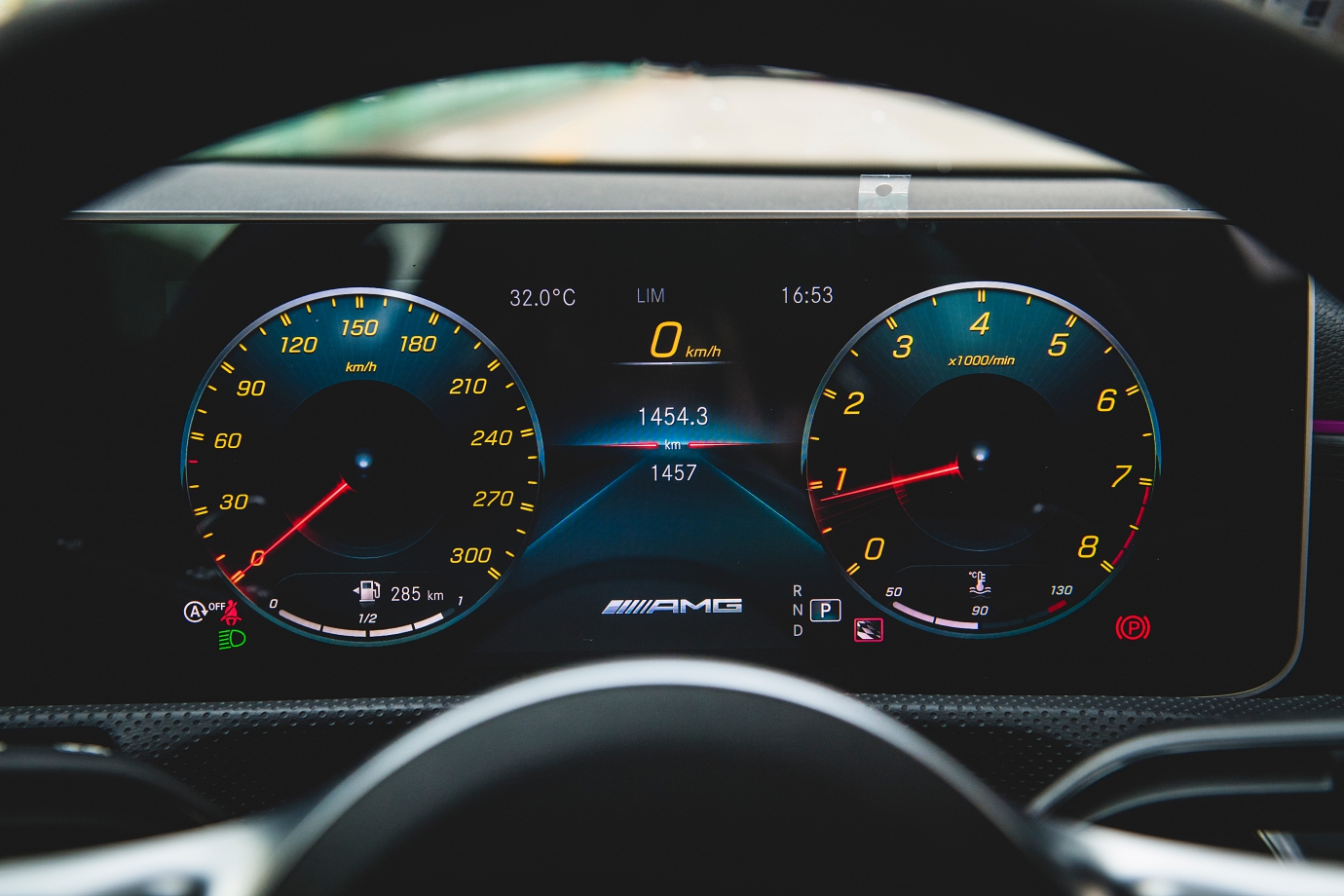 But that’s all changed with the 45 S range, because it’s very clear AMG’s range of feisty ‘hot’ compact models has come of age, with everything clicking into place the moment you first turn the CLA 45 S’s wheel in anger. The steering feel is wonderfully weighted, with precise responses and communicative feedback so you’re able to pilot the car at speed with sublime confidence.

The ride too, is wonderfully sorted and boasts a suppleness that is a welcome change from what we experienced with the first generations of the 45 range. We sampled the 45 S in both the CLA coupe and the CLA Shooting Brake forms and they were consistently good, with fabulous body-control in Sport+ and Race when you start tackling the winding roads.

The great thing about 4Matic+ (remember, the earlier 45 models were on 4Matic) is its ability to distribute power to each or both of the rear wheels selectively, so it behaves in an engaging rear-wheel-drive manner in the sportier drive modes when you’re really pushing it.

And that’s why the new CLA 45 S deserves much wow, especially with its 4Matic+ variable all-wheel-drivetrain and explosive twin-scroll turbocharged 2.0-litre four-pot. The S punches out a gobstopping 421hp and mega 500Nm, which will see it demolish the 100km/h sprint from standstill in 4secs flat, after which it’ll shoot for the moon with a top speed rated at 270km/h. In some ways, the turbo’d four-pot channels the spirit of its big nat-asp predecessor and is every bit as rambunctious as I remember it to be, with a shocking detonation as you work your way up the gears of the 8spd dual-clutch transmission. The ratios are perfectly matched to the engine’s powerband, with a seamless thrust when you put pedal to metal that brings to mind the brand’s large-capacity, naturally-aspirated engines of yesteryear.

It’s hard to believe that something so mild-looking is capable of such sportscar-defying feats of performance. I reckon one of these will easily latch onto any of the latest exotic sportscars through the winding roads, and it wouldn’t be easily shaken… if at all.

Instead of playing tit-for-tat with its rivals in the ‘hot’ compact segment, it’s great that the 45 S has put on its big-boy pants and taken charge to create sportscars worthy of the ‘AMG’ brand, which transcend outright speed and slick 0-100km/h times, because as we all know, ‘fast’ doesn’t necessarily mean ‘fun’.

As far as the CLA 45 S Shooting Brake is concerned, it’s hard to think of a rival in this compact segment that comes close to offering such an engaging drive experience – just like every AMG from before – and with the 505-litres boot loaded up with groceries, no one will ever think it looks sus at all. Here’s your first look inside the new Mercedes-AMG SL