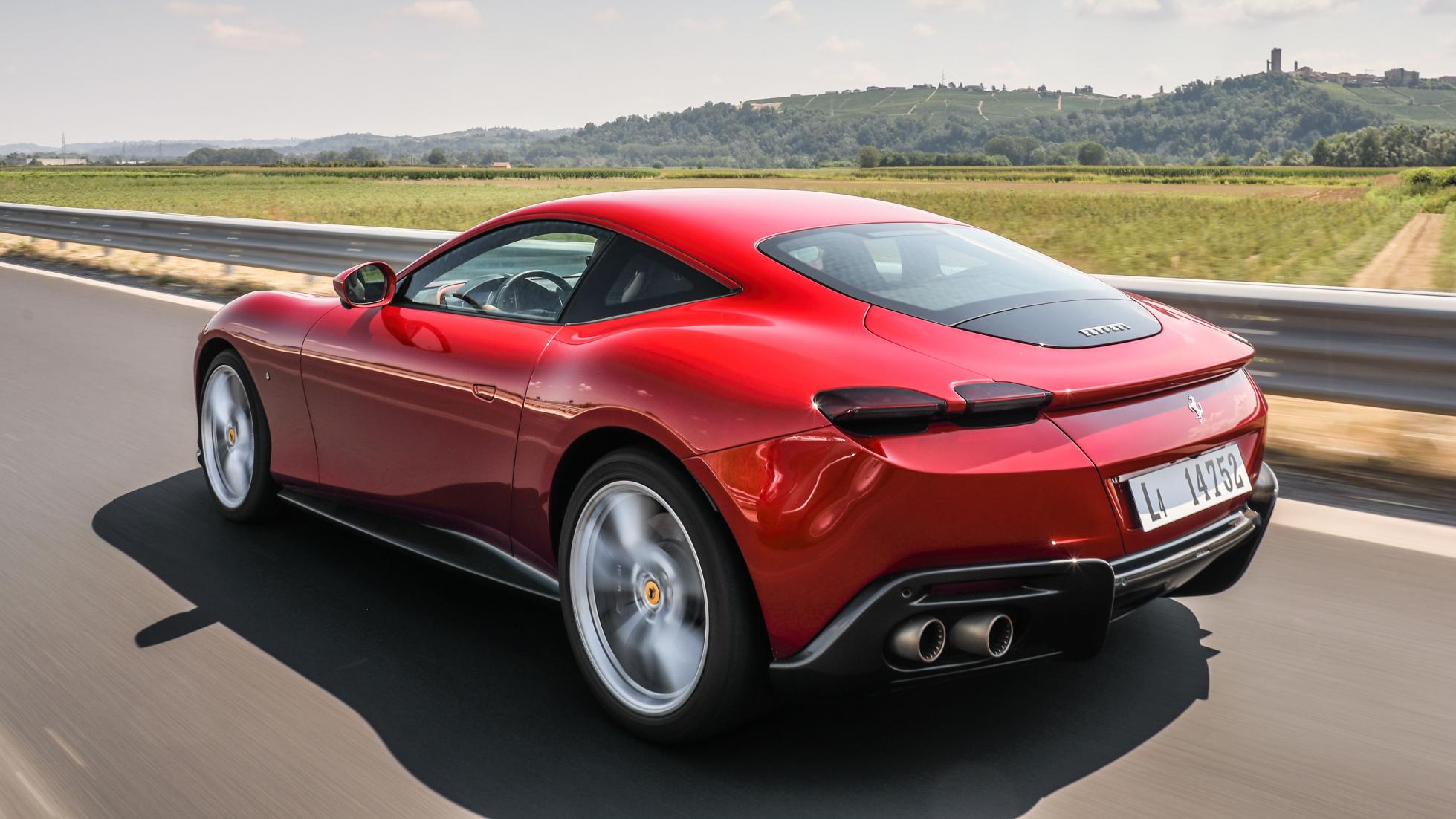 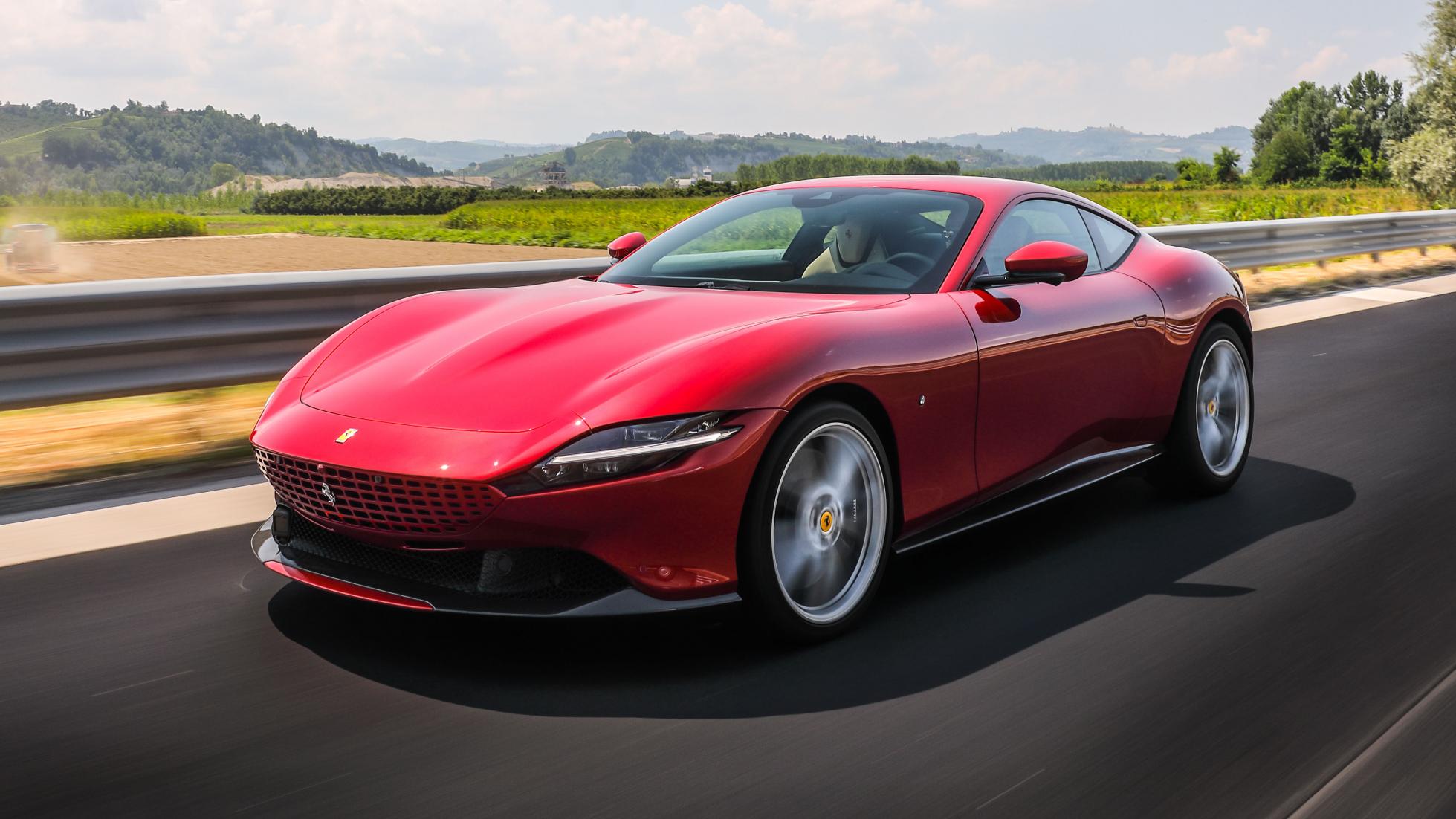 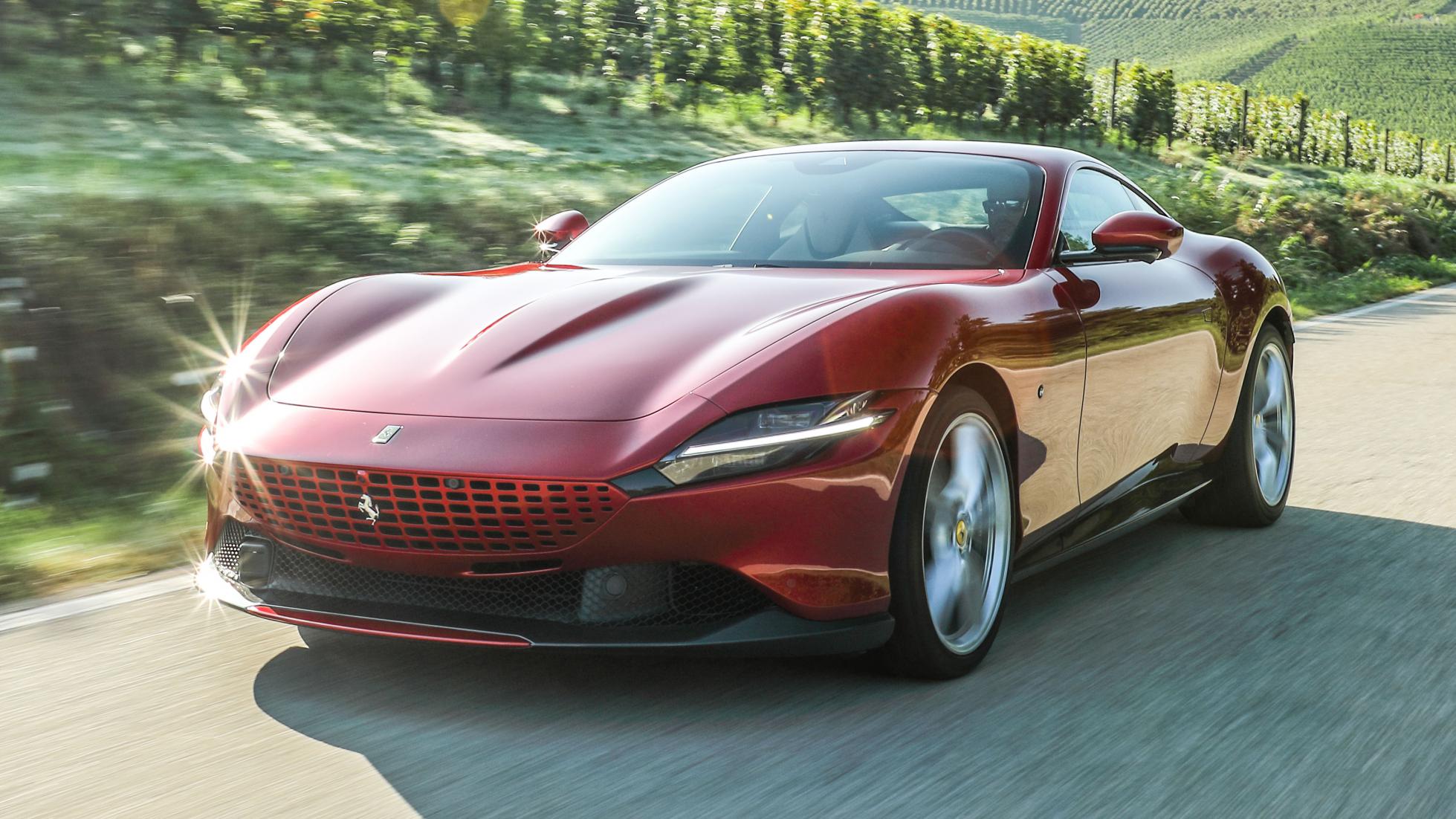 This is Ferrari’s, erm, compact GT, variously described by the company’s marketing people as ‘an F1 car in evening attire’ and a 2020 reboot for that ineffably Italian idea of la dolce vita.

Now, you might surmise that Ferrari has been in the gran turismo business pretty much since day one, when Enzo Ferrari cottoned on to the fact that the world’s high net worth individuals (they were plain rich back then) would pay handsomely for house-trained versions of his beloved racing cars.

Ferrari’s GT cars are the foundations upon which the House of Enzo was built, but the template drifted with 1975’s mid-engined 308 GTB and no-one really fancied the louchely chiselled 365 GT4/400i.

So it is that the Roma represents a renaissance for a Ferrari that embodies understated luxury rather than shrieking its potential from terracotta-clad rooftops, that posits elegance ahead of razor-sharp handling smarts.

It’s the Ferrari for people who don’t really ‘get’ the Italian powerhouse, who wouldn’t describe themselves as keen drivers, and who prefer to fly under the radar.

Given the state of the world right now, a less shouty Ferrari might be just the ticket.

Maranello expects 70 per cent of Roma customers to be new to the brand, and the siren’s call is done via a body whose design espouses the modish idea of reductionism and purity.

Ferrari’s design director Flavio Manzoni is quietly, astutely revolutionary in his thinking, and for all the call-backs to Fellini movies and Sophia Loren, the Roma is a progressive looking, beautifully proportioned car.

The front wings crest emotively, and the sheet metal resolves in an ever more sharky front end. The LED headlights and partly blanked off mesh grille are both controversial but vault the Ferrari ‘face’ into the 2020s. You’ll get used to it.

The body sides have an aeronautical, fuselage feel, and the rear lights use new tech to minimise their size and presence.

No signature round lights here. Note also the vortex generators upfront and deployable rear spoiler, which has a Low Drag, Medium Downforce and High Downforce setting but mainly stays out of the way (the Roma’s aero balance is superior to the Portofino’s).

This is also a car that suits sober colours. Time was when every new Ferrari was launched exclusively in rosso corsa. This is a different Ferrari for different times. 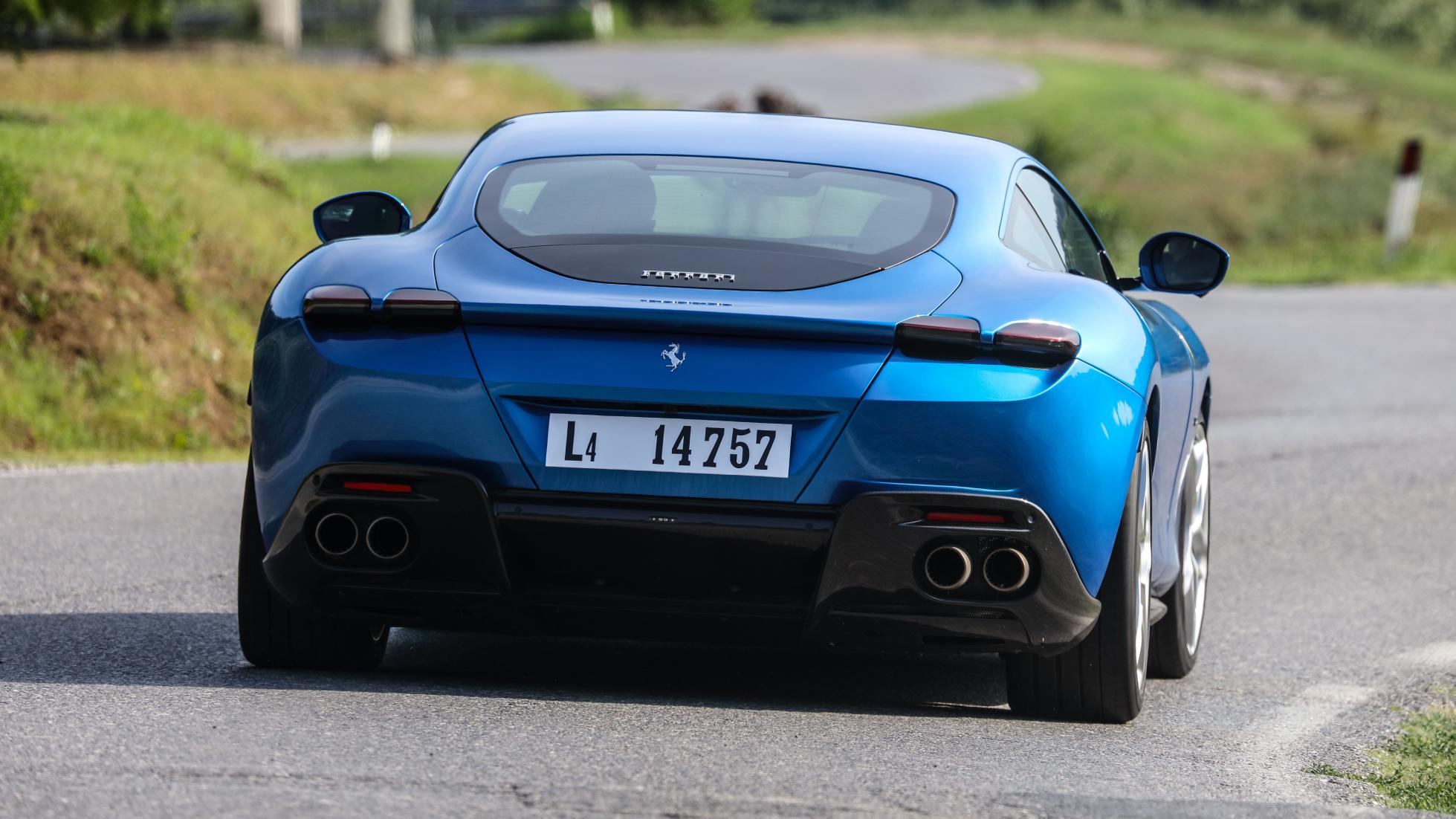 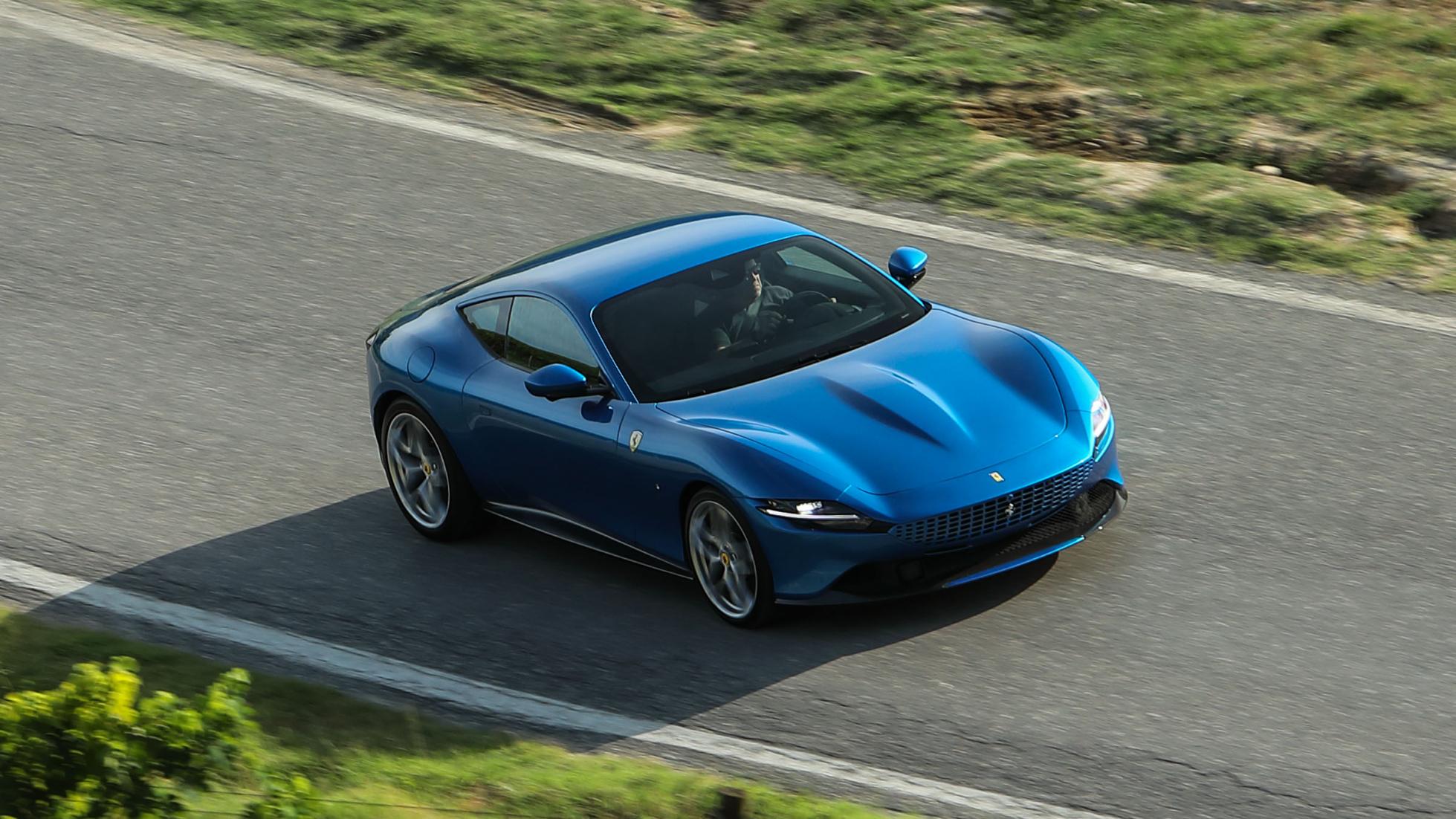 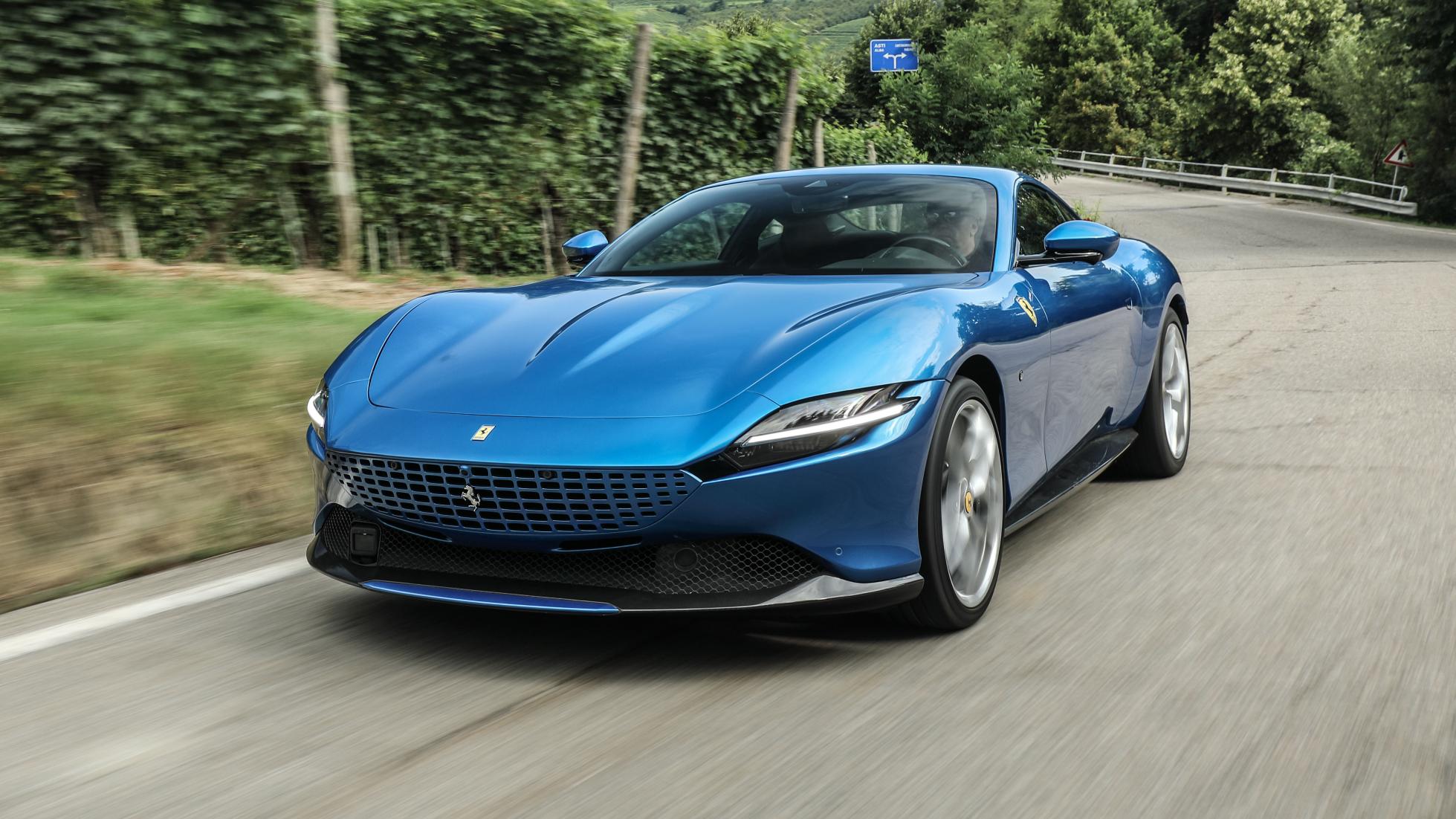 The advance buzz on the Roma suggested a hotter Portofino. Ferrari insists not. Accordingly, 70 per cent of the components are entirely new, and it incorporates the latest weight reduction and production techniques.

Chief test driver Raffaele de Simone singles out the chassis engineers for particular praise, which is significant because while the Roma is a less frantic car, the hard bits underneath point the way forward for Ferrari.

Not that any car powered by a 3.9-litre twin turbo V8 making 620hp is ever going to be anything less than extremely vivid.

In the Roma, the engine receives new cam profiles, a revised catalytic converter and gas particulate filter, a reworked exhaust that uses an oval-shaped flap rather than a traditional silencer, and more aggressive valve lift profiles on intake and exhaust.

So it’s more thermally efficient but also more sonically satisfying, too. This was already one of the world’s cleverest engines, and the biggest issue the fortunate end user faces is simply being able to tap into its huge potential.

In the Roma, of course, that sort of emotional overload wouldn’t be appropriate anyway, and the result is a car that is as seductive at whispering in your ear as it is giving it the full 7,500rpm V8 baritone roar.

There’s a new gearbox, too, derived from the eight-speed dual-shift one in the SF90 Stradale. It’s improved in every measure: lighter, faster shifting (15 per cent on upshifts, 21 per cent on downshifts), more efficient, and better integrated with the engine software.

We tested the car in Piedmontese wine country, whose topology and road surfaces are very similar to the stuff you’d find near Maranello. Which is to say, often bloody awful. Throw in an apocalyptic downpour and the scene’s set for a sweaty-palmed, often eye-popping few hours.

Ferraris crave dry tarmac, and need proper heat in the tyres to do their best work. A combination of slippery surfaces and heavy rain meant this was the first time I’ve ever resorted to the Wet mode on the manettino. It works extremely well, though that flickering traction light is a reminder of how much work the software’s doing.

Comfort, Sport, Race and ESC-Off (are you sure?) complete the quintet, backed up by something called the Ferrari Dynamic Enhancer – which adjusts brake pressure on whichever wheel needs it and works only in Race mode – alongside the regular stability control and V6.0 of side slip control.

Ferrari has gone truly, bewilderingly digital, but beneath it all is a deeply satisfying car to drive, both quickly (0-100km/h in 3.4secs, 0-200km/h in 9.3 secs) and not-so-quickly, with wonderfully linear steering, fantastic composure, and terrific brakes (the pedal feel is better on the Roma, too).

Perhaps more relevant to the people who’ll actually end up buying the thing is that its steady-state motorway manners are also exemplary. That it’ll go sideways at the drop of a Borsalino hat is neither here nor there. 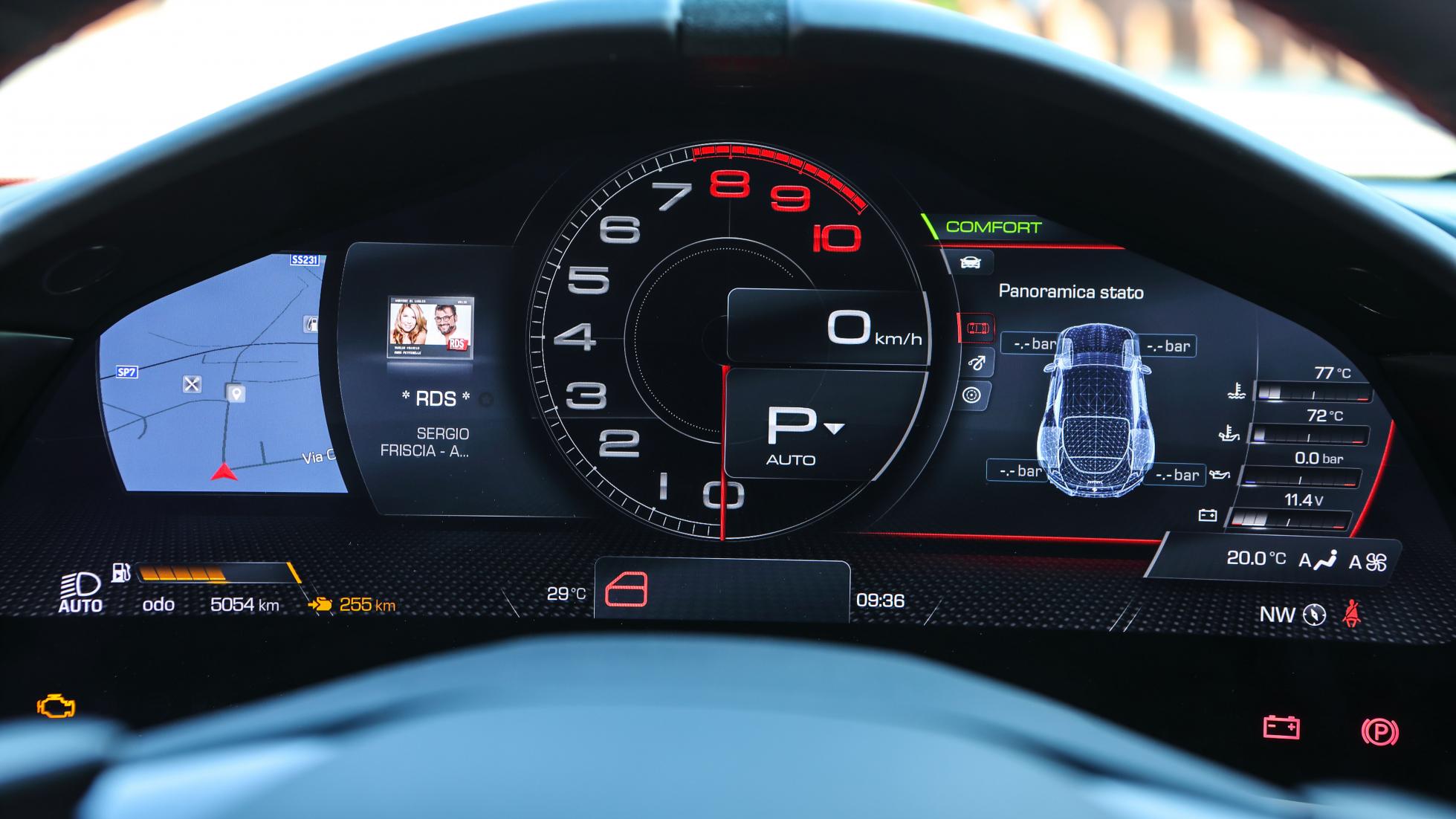 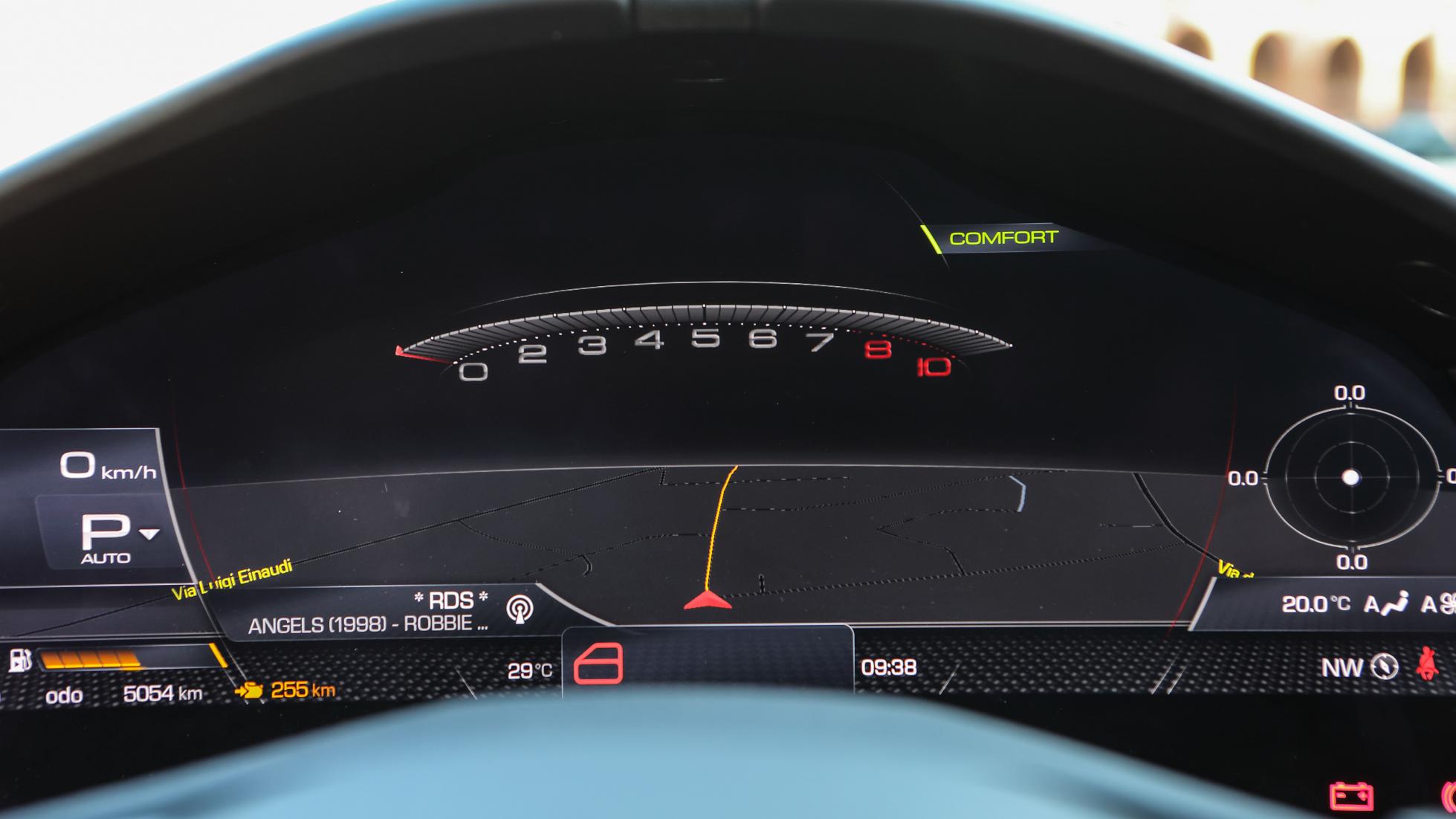 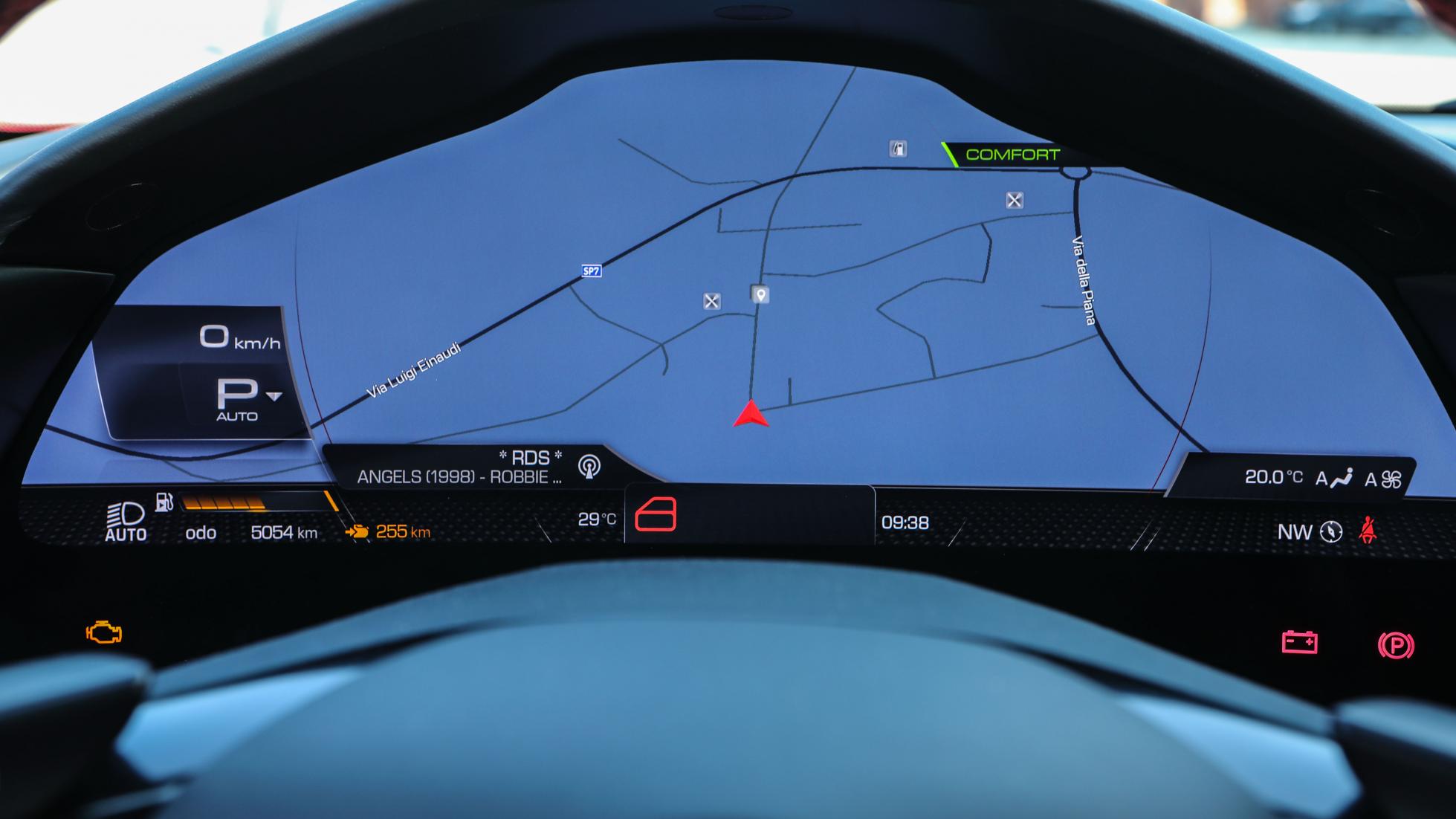 OK, this is where things get tricky. Like that bit in The Matrix where Neo is consumed by those malevolent algorithms, the Roma jettisons regular switchgear in favour of capacative multi-touch controls. Look, I know everyone’s doing it but that doesn’t make it right.

There’s nothing wrong with the main instrument display, a 16in curved HD screen that can be personalised, and which you navigate using a touchpad on the right hand spar of the steering wheel. Interestingly, there’s a quasi sci-fi whooshing sound as you move between the different displays. The touchpad on the left spar operates the adaptive cruise control.

Meanwhile, the indicators, wipers and manettino are on the wheel as has been the case for about the past 15 years on Ferraris, but still feels a bit wrong. This Ferrari also uses cameras and ADAS and all that stuff. Also a bit wrong.

The problem areas are the hidden engine start/stop button, the touchpad to adjust the door mirrors, and the button that opens the door. I would prefer to interact with a proper, machined piece of metal or physical button for these, please.

And while we’re on this subject, can we have a manual volume control for the audio and similar for the climate set-up? Both of these nestle within the domain of the 8.4in central display, which means you’re destined to do a lot of finger prodding, much of it in vain.

The central display screen itself looks like it should detach, but obviously doesn’t. Ferrari says all this stuff is in service to the ‘eyes on the road, hands on the wheel’ mantra, and its biometric tests empirically prove there’s a reduced distraction as a result. Not with me behind the wheel, there wasn’t. But then I can’t message on my phone using my thumbs, either.

The cabin itself has a nice ebb and flow to it, and is meant to involve the passenger more in the experience. The drive controls in the centre console mimic the old open gate of manual Ferraris, but it’s not just a design conceit: three-point turns beside an Italian vineyard are much easier to perform. The interior can be had in full-grain Frau leather or Alcantara. It’s a lovely place to sit, no question. 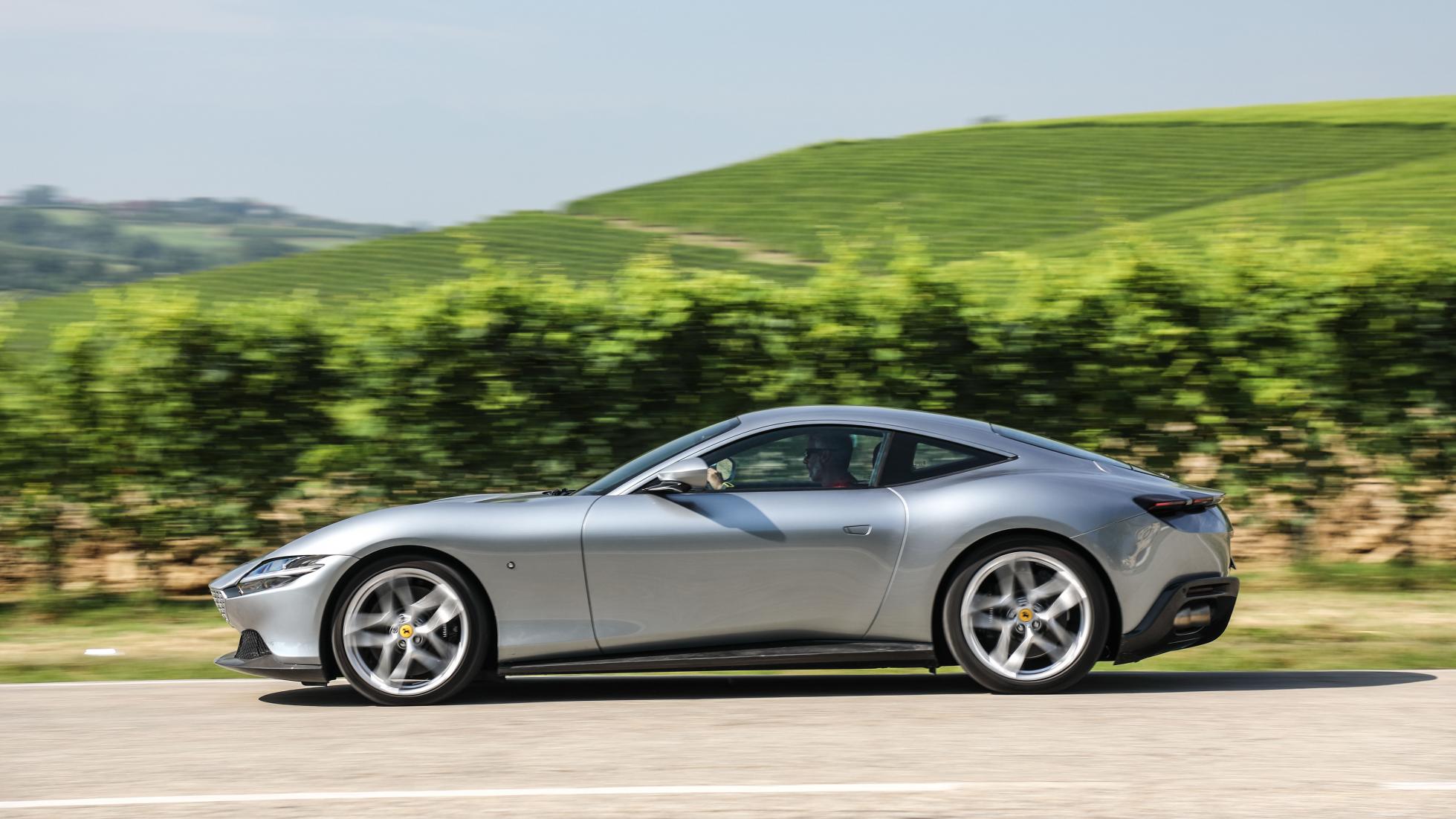 On its current form, it was unlikely Ferrari was going to get the Roma wrong. There’s something seductive about a small(ish) Ferrari with a V8 engine mounted in the front, as opposed to the middle – just as they were in the company’s earliest days.

Dynamically, the Roma covers all the bases: as befits the GT remit, it could convey you and a lucky passenger across a continent with charismatic ease, and not disgrace itself should there be a circuit at the other end. This is a Ferrari where everything has been deliberately dialled down a bit, and made more accessible. But don’t be fooled: something of an assassin still lurks within.