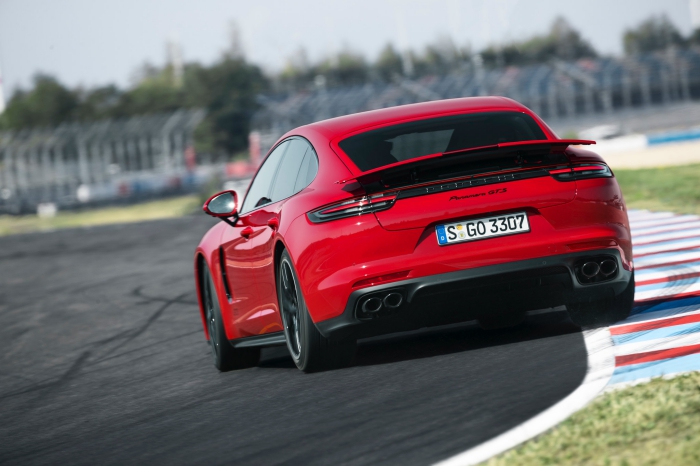 The second Porsche Panamera GTS is here, this time with turbo power. There’s only one place to test a car like this, and it’s the track... 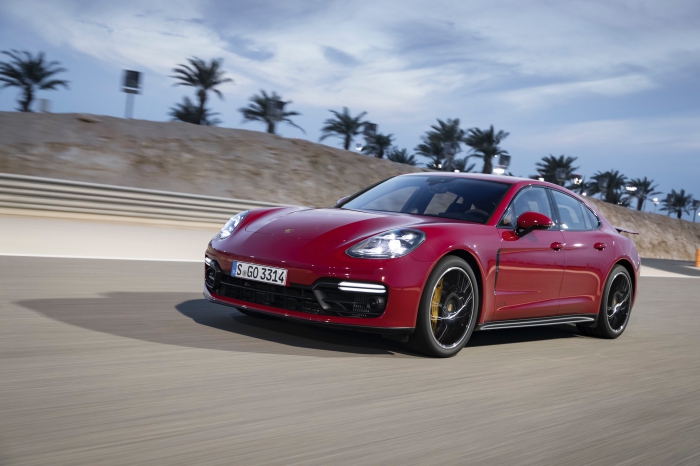 Oops. Oops again. One thing’s for sure, no one will ever lament that I was one of motor racing’s great undiscovered talents. But I knew that before I got here, 'here' being the Sakhir circuit that’s home to the Bahraini round of F1. 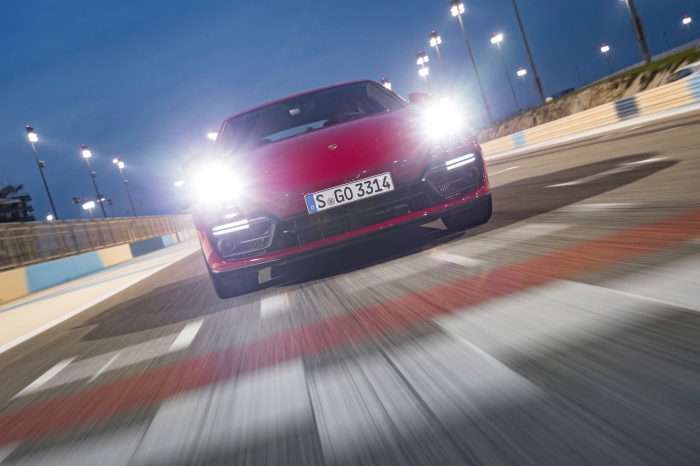 If I didn’t know better, though, I’d say the Panamera GTS I’m driving is having a jolly old time reminding me of my general lack of talent, secretly laughing as I do my level, white-knuckle best to try and keep up with a 911 Turbo S driven by World Endurance Car hotshoe Kevin Estre. Oops, there goes another missed apex. Oops, the tail’s wiggled out again. But frankly, I’m finding it pretty amazing how well two tonnes of Porsche limo takes to the track. This is a Panamera, I need to remind myself, but I’m having a blast around Sakhir. It’s as big as a 7 Series, and out on the street is damn near as comfy as one. When did cars become good at everything? 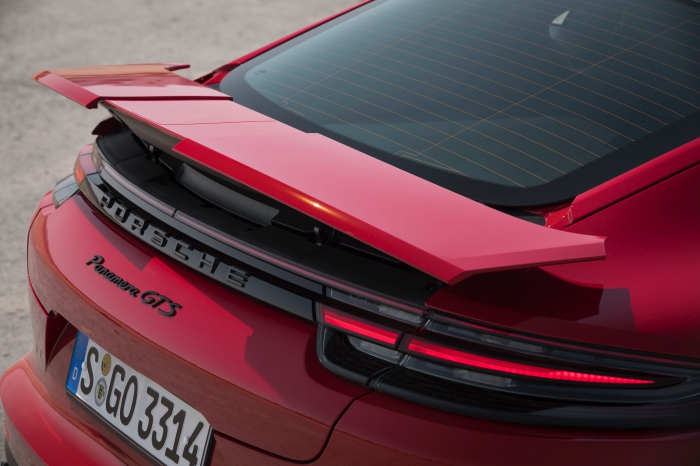 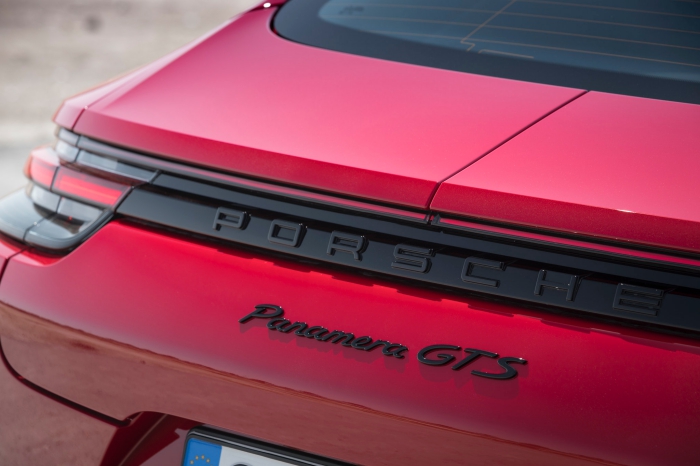 This is the second time there’s been a Panamera GTS (which makes sense, since this is the second-gen Panamera), so you’ll be somewhat familiar with the idea: it’s a bridge between the 4S and Turbo, so it slots in between them in terms of price and performance. 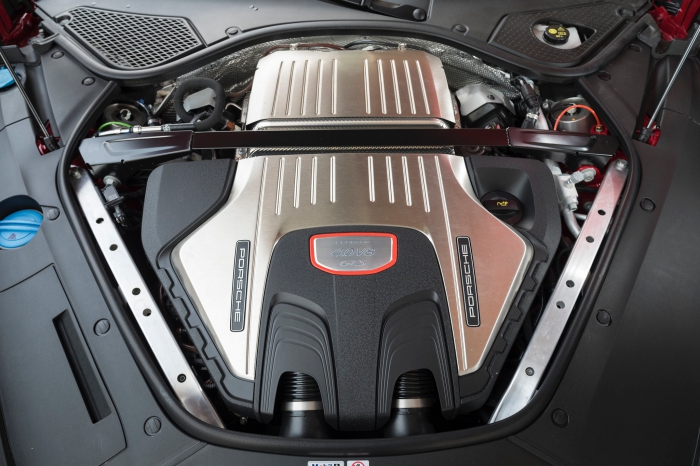 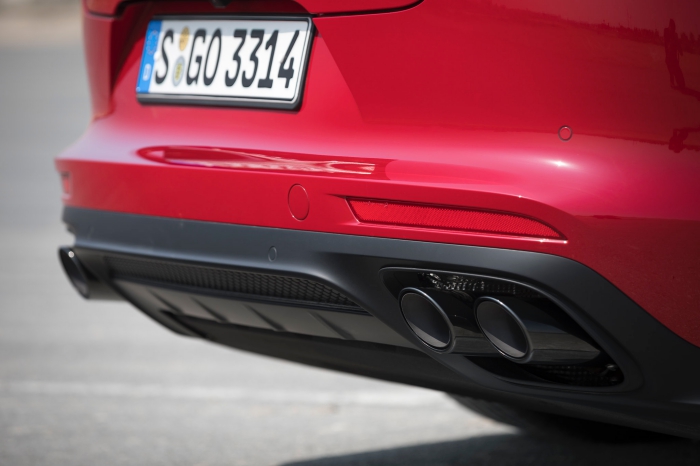 It has four-wheel drive, an 8spd PDK, and a twin-turbo V8 good for 454bhp (a useful 20bhp more than the 4S is endowed with). It was a deliberate act to not try to conjure the extra power out of the 4S’s V6. Apparently it was decided pretty early on that a V8’s snarl was essential to the GTS experience. And never mind what the price list tells you. A more useful way to think of the GTS is that it’s the Panamera for keen drivers. Sure, everything Turbo and up on the model ladder will be faster in a straight line, but the GTS is all about sharpness, says Armin Köpcke, the engineer who fettled its handling. You choose this Panamera, he basically tells us, if you care about how a car feels. You’ll probably care somewhat about styling, too. Outside you get black trim, different bumpers (as part of the Sport Design pack) and 20-inch wheels that accommodate bigger brakes. Inside? Contrast stitching, sportier seats, plenty of Alcantara, including on the steering wheel. And of course, GTS logos everywhere. If you want to be quirky, you can have it all with the Sport Turismo body. It has that 4+1 seating configuration and a slightly bigger boot, and that much more attitude. Oh, but you’ll miss out on the fastback’s hypnotic fold-out rear wing, which up until now was strictly a Turbo-only thing. 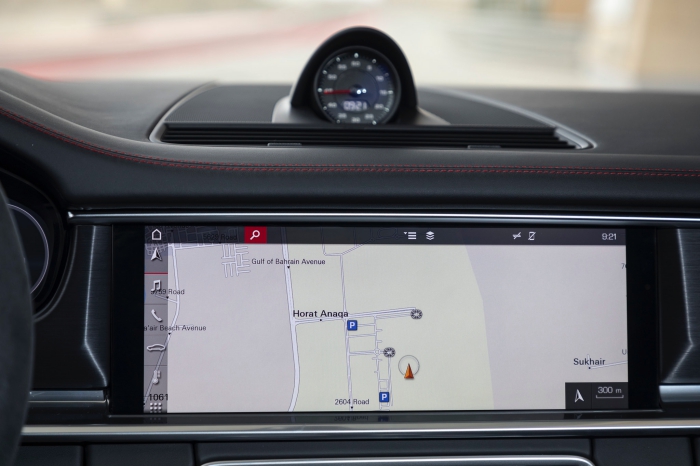 Also standard to the GTS is a rorty sports exhaust (you activate this via touchscreen, but it really should have its own button), the Sport Chrono pack that improves the 0 to 100km/h time a smidgen, courtesy of various driving modes, and a lower (by 10mm), stiffer suspension setup that you can’t simply add to any old Panamera. 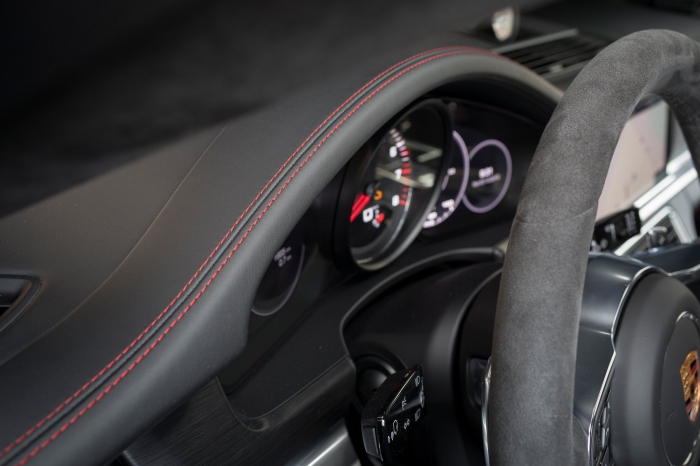 And there’s the secret sauce of the thing. Köpcke says he worked hard on the setup to banish understeer, playing with the damping and roll stiffness of the car to get its balance just so. The press cars all came with Porsche Dynamic Chassis Control (active anti-roll bars, basically), but Köpcke says even without it the GTS rolls by just three degrees under one G of cornering. Also on the press cars but maybe not in the showroom ones: Porsche Torque Vectoring Plus, ceramic brakes, and rear axle steering, which Köpcke personally recommends you spec. 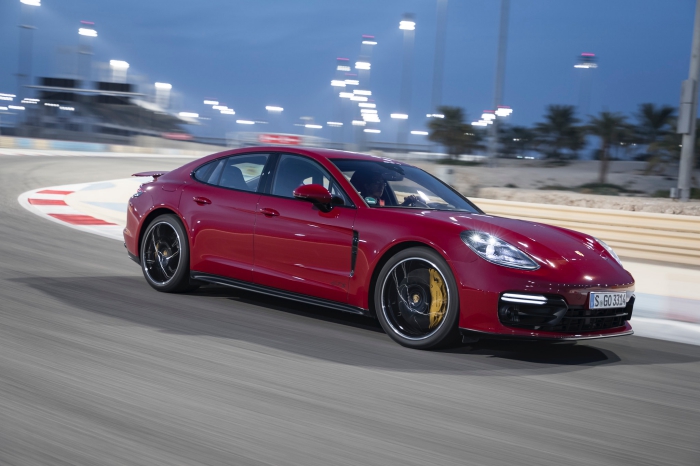 All of that might seem like crazy stuff you pile on to make the Panamera a monster on the track, but some of it will make life better on the road. Rear axle steering, for instance, means easier U-turns and less stress in the carpark. The standard air suspension, too, plays a huge part in making the Panamera ultra civil in the city. In Bahrain, which we basically crossed from North to South before hitting the track, road quality isn’t too far off what you get at home and in some parts of Malaysia, and the Panamera took them in its stride. There’s enough refinement here to make an all-day drive to wherever feel energising instead of enervating, I daresay. The V8 is nice and spontaneous, too, but it’s never as violently manic as, say, one of AMG’s finer efforts, so it can do gentle motoring pretty well. But don’t take that to mean that it’s soft, because it erupts with a small tsunami of torque when you nail the accelerator. No matter what, 100km/h in 4.1 seconds feels fast, even in a big, plush car like this one. 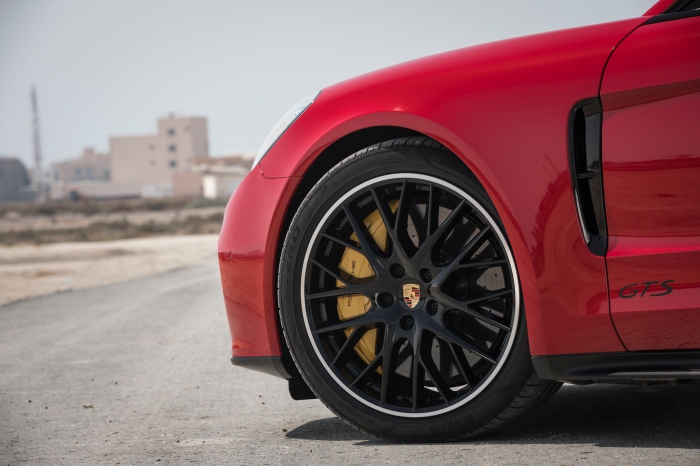 That’s on public roads. On the track, you do feel a lack of top-end zing, especially if you remember how rewarding it was to chase revs in the last (non-turbo) Panamera GTS. Yet, it’s the handling that enthrals. The front end has ferocious grip, which plays well with a rear-biased AWD system to make the car feel pointy. But it’s also forgiving, and communicative enough to let you know if you’ve induced a small body movement that you have to check before it becomes a big one. The brakes are mighty, too, with staying power, so you can hit the anchors far deeper into corners than you expect, several tens of metres after your buttocks have started to clench at the entry speed. Yet, with so much going on it’s actually very easy to over-drive the Panamera: just brake like a crazy person, snick it in, mash the throttle and let torque and awd do all the rest. After a bit of that at Sakhir, however, I try to be a bit more measured and precise instead, and by the time the night laps are in session what had started out as a big bruiser of a car turns into something surprisingly delicate. Pay attention to what you’re doing, and you can drive the GTS in that tiny window before PSM intervenes, but after there are small, wiggly movements that you can judge and react to. That said, it’s understandable if you can’t see this as a track car because you don’t do track days anyway, or would prefer to do them in something small and light. In that instance, would you be better off with a Turbo? It’s hard to say, really, but you could go for the GTS for the tasty looks alone, or even because it’s terrific value for money – spec a 4S up to create your own GTS lookalike, and I bet you’ll approach six figures worth of extras. 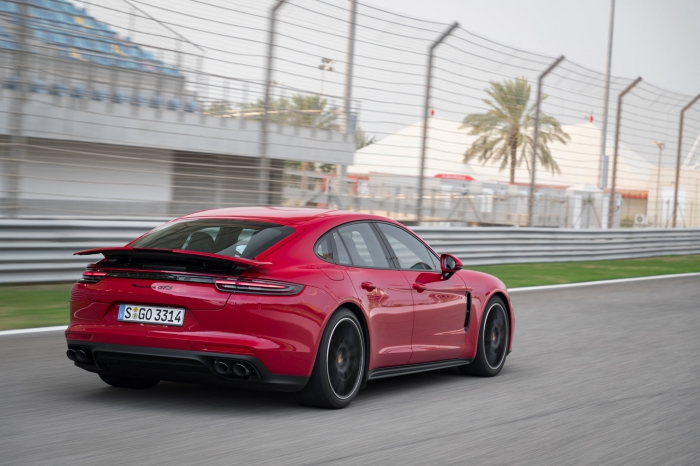 Or how’s this for a reason: because it feels special. I already think of the last Panamera GTS as a collector’s item, and this one has that same quality of working with you if you try hard. It’s the kind of car you want right there with you on those moments you actually do feel like one of motor racing’s lost talents. Not worried about your 0-100 time? Allergic to paddles? Good news from Germany