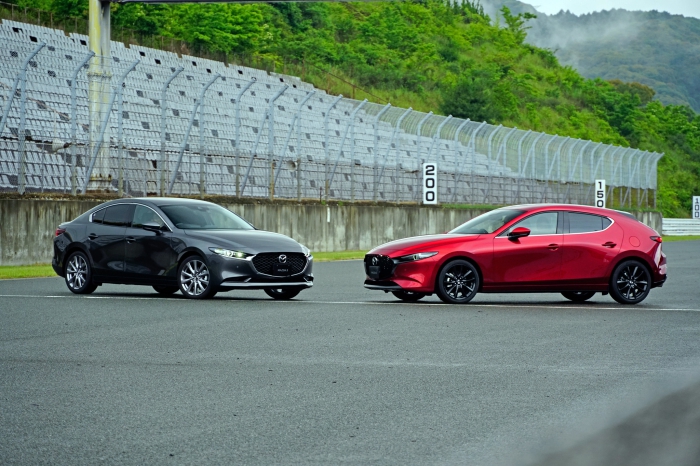 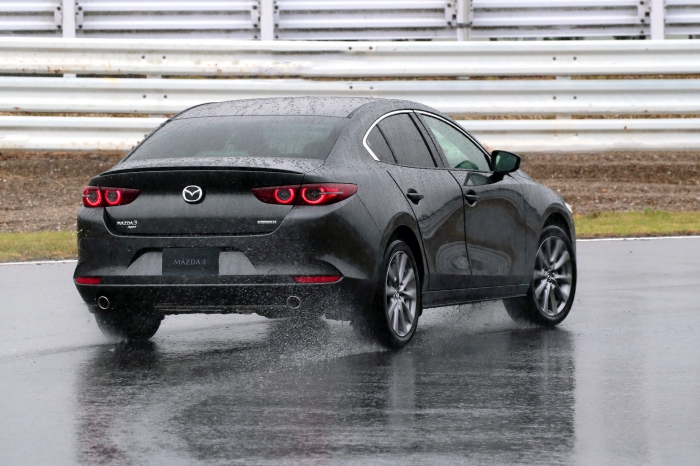 Yamaguchi, Japan - Top Gear Singapore is a bastion for all things four-wheeled, fast, furious, and fun, but honestly, watching the competition further down the scale can be just as fascinating. That’s because it involves products that almost anyone can own in their lifetime. Which is why the new 2019 Mazda3 has got me rather excited. It may have 155hp and a 2.0-litre engine engineered for efficiency rather than emotion, but literally everything else about the car is so different and so much better, it’s going to harry cars far beyond its on-paper segment. 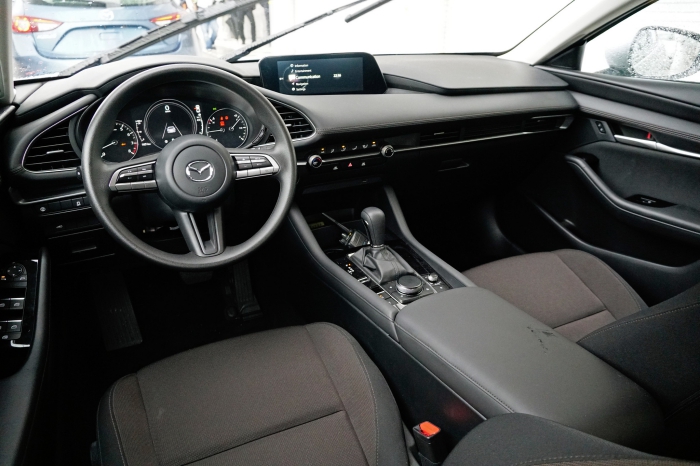 There’s a good reason for this too, and not just because the car is Mazda’s best-seller in Singapore and around the world. Like the CX-5 SUV did in 2012, the new 3 also marks a new era for the Hiroshima-based brand, and the technology we see here is going to be in all of its cars for the next decade and beyond.

We’ll get our complaint out of the way first: The only confirmed model for Singapore at this time is the 1.5-litre inline4, which is the same powerplant as before, albeit matched to the new Mazda Hybrid System - a mild hybrid setup that doesn’t add any power, but instead focuses on efficiency improvements. We drove the 2.0-litre non-hybrid model, which is as conventional as the new car gets, and is under consideration for Singapore. Also being considered is the king of the range - the 2.0 Skyactiv X - which combines the mild hybrid system with Mazda’s one-of-a-kind compression ignition tech that claims to possess the best qualities of gasoline and diesel engines. 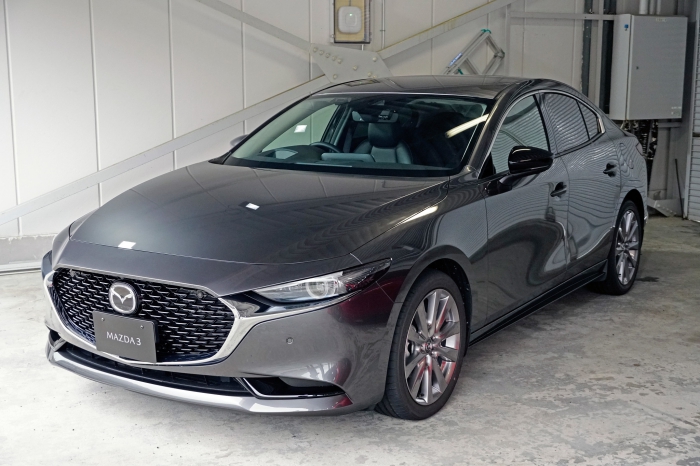 You don’t need bifocals to know that there’s a new model. The new car looks gorgeous and unlike anything else on the market. East Asian cars sometimes take cues from luxury ones, but Mazda’s secret here is its insistence on using sculptors as much as pen-and-paper designers. Mazda deliberately stepped away from the'more creases = technical supremacy’ type of design seen in German cars, and focused on creating a shapely body that plays better with light and shadow. Five-door enthusiasts will be glad to know that Mazda has also made a bigger effort to differentiate the sedan and hatchback, with each having a different visual character.

"The sedan is more sleek and elegant, while the hatchback is more condensed and emotional," said Mazda chief designer Yasutake Tsuchida. At the drive, we also saw the hatchback (looks great in Soul Red) along with a new, hatch-exclusive colour called Polymetal Grey. 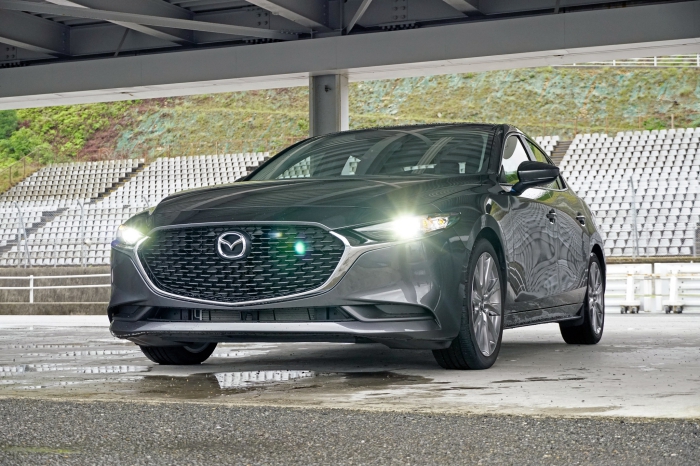 The car we saw had an additional sport kit too. In the shade, it looks like the very trendy primer flag grey seen on some performance cars, but becomes very obviously metallic in the sunshine. If its mainstream cars look this good, we can’t wait to see what a real Mazda sportscar looks like (check out the RX Vision concept car for a taster). Another guiding principle was Japanese minimalism, something that’s plain to see on the interior of the car. Mazda focused on'reducing visual noise’ and improving the human-machine interface, something the elegant, uncluttered and ergonomic cabin scores big points in.

There are fewer seams and visible joints (see the upper dash which is all one piece for instance) and the infotainment screen has both been raised and made much larger (jumping from 7.0-inches to 8.8-inches). The latter is an entirely new system with dual processors that’s crisp and lag-free in performance, and Mazda has gone to rotary-dial-only control because it’s less distracting for the driver - something we wholly agree with. Mazda also talks about how it worked to make the white backlighting and switchgear consistent in appearance and feel. If all of these things sound familiar it’s because brands like Audi and Lexus do that too. The result is a cabin that’s really quite pleasing to be in. In fact, we can think of no better one in this price range (assuming the Mazda 3 remains in the same price, that is); there’s no wrist-contorting, no 'why did they do this’, just simple, straightforward touches that make you appreciate the thought that’s gone into it. 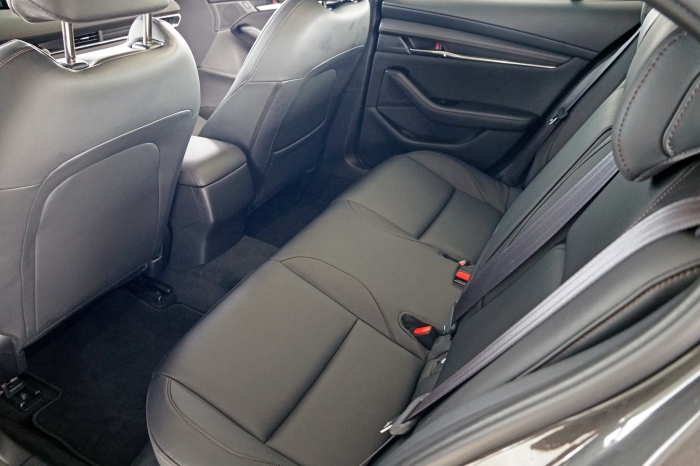 On a practical measure, the car’s wheelbase is slightly longer (2725mm up from 2700mm, the car is slightly longer but almost the same width and height) but the drawback is that it seems as if the interior space is largely the same, though you can still fit five adults in relative comfort. Boot space has jumped from 419-litres to a class-leading 450-litres. Our time behind the wheel was limited to laps on Mine Proving Ground’s main circuit and handling track in extremely wet conditions, but our initial impressions are good, especially since we were able to drive the new and old cars back-to-back. A sodden racetrack, even with a pace car, is not the best place to experience the full range of a car’s capabilities, but it’s very obvious that the new Mazda 3 drives in a more mature, refined, and controllable way than its predecessor. The steps Mazda has taken to improve the NVH performance have paid off well, with far less wind and tyre noise at speed, as well as significantly less'slosh’ noise when going through standing water at high speed. Semi-flooded, downhill, off-camber turns in cold weather are probably the closest thing to a normal Singaporean driver’s nightmare, but the Mazda 3 takes the fear out of it, since it’s more refined, but also displays improved body control and less understeer. Mazda’s switch to a new platform with more high-strength steel is partly responsible, as is an updated version of its own G Vectoring Control (GVC) system that reduces vehicle swaying. On paper, the switch to a torsion beam rear suspension (replacing Macpherson setup) might cause driving fans concern, but if anything, the new car handles and rides much better than the previous one.