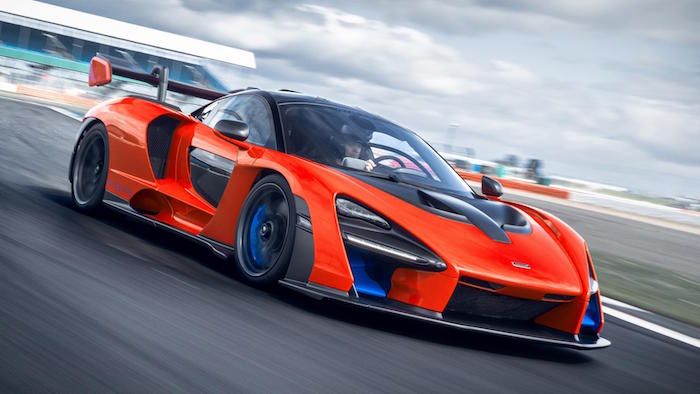 Sounds a lot doesn’t it? It’s important that you know right at the outset that 800hp is the least impressive thing about the Senna. The brakes, oh my god, the brakes. On Silverstone’s Hanger Straight, stopping from something approaching 275km/h, I brake far too soon on every lap. I just can’t get my head around how late it’s possible to brake in this car. 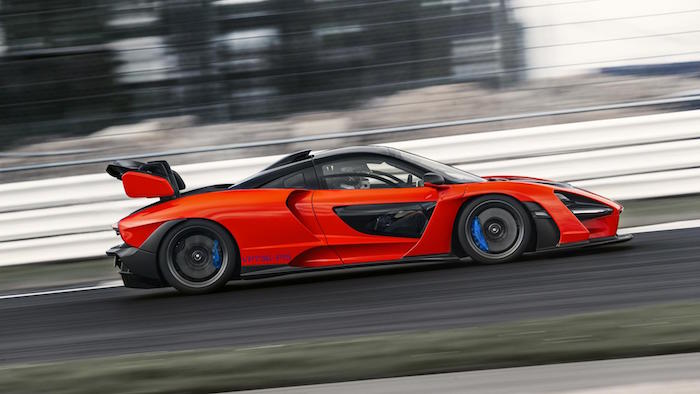 They are when what they’re capable of requires a whole change of mindset. But that’s the Senna through and through – no pandering to design, no compromise on the engineering, just make the ultimate road-legal track car. It’s ugly, we know that, but isn’t it fascinating?

That’s what gets me about the Senna, I just want to know how it works, why that bit is there, why that’s angled like that, what that element does. Because everything is there for a reason. 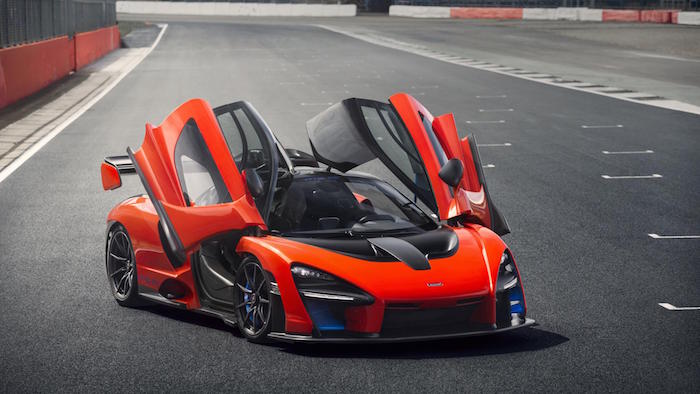 It’s all about the aero, right?

Yep, aero and road legality. That’s why the massive rear wing doesn’t protrude beyond the back of the car. Now, I could go into ridiculous detail about every element of what you see, but here are a couple of highlights: the underside of the wing - the negative surface - creates more downforce than the top side, so the Senna isn’t pushed down, but sucked down.

And that’s why the stanchions attach to the top side, not the bottom – the bottom is more important, the side that must be kept clean. 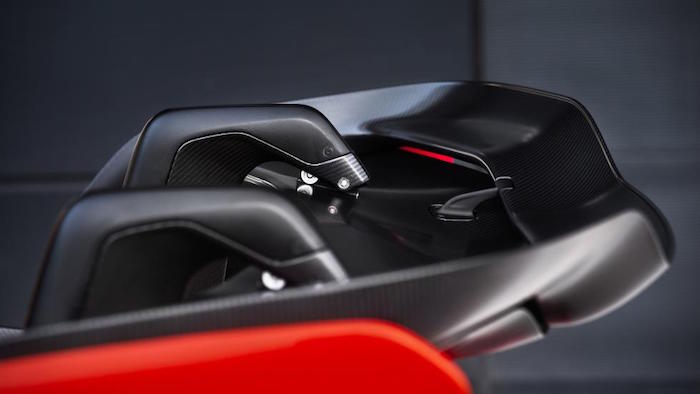 The width of the gap at the base of the A-pillars is vital, as the air that’s forced through that area is fed to the huge side intakes and destined for the engine. Amongst other things this meant the door strut had to be entirely redesigned.

But my favourite thing was when I asked Andy Palmer, director of McLaren’s Ultimate Series cars, how on earth they made that rear wing road legal, and his reply was “well, we have a very good relationship with Pete at the VCA”.

That’s right, he’s on first name terms with the chap at the Vehicle Certification Agency, the people that ensure cars comply with road regulations. He went on to say that Pete had initially told him there was no chance that wing could be made road legal, but there it is, giant, towering and globally homologated. I can’t imagine the amount of negotiation and tweaks needed to make that happen. 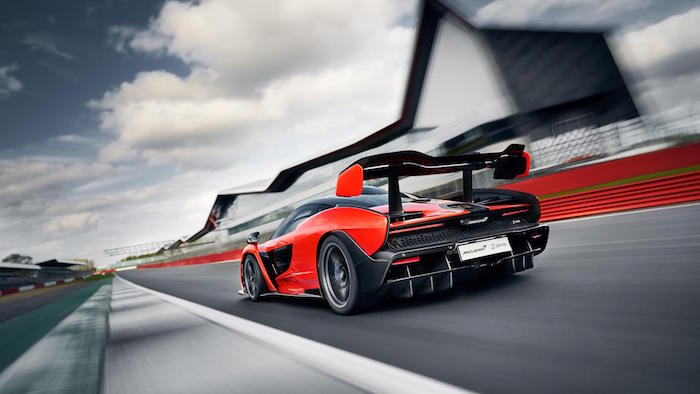 Tell me some numbers.

It could develop more, but above 250km/h McLaren uses the active aero (the rear wing can swing through almost 90 degrees, and there are hidden winglets in the front intakes) to bleed downforce off, believing 800kg to be enough. 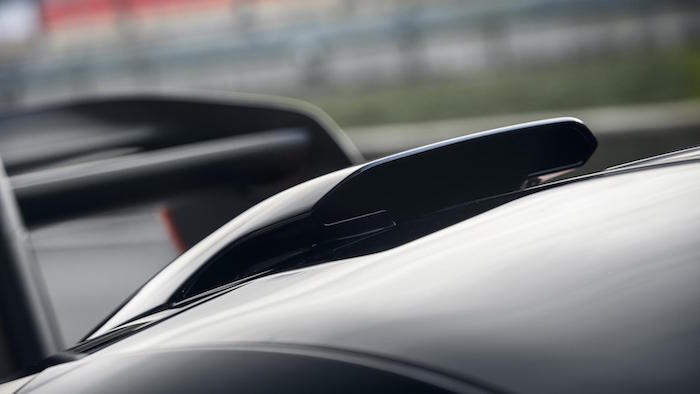 But you only drove it on track?

Correct. This isn’t a fully finished car, says McLaren, so this was just a taster, a few laps of Silverstone’s International circuit. In Race mode. Wearing helmet and HANS device. With a pro driver sat next to me. Poor soul.

First things: you’re aware of how light the door is (just 9kg, about half the weight of a P1 door), how snug the fixed carbon seat and how bare the carbon trim. Those glass panels in the roof and door, well you don’t notice them once you’re rolling.

The ambience is business-like, a road car, but with all the trim scraped off. Not quite skeletal, not quite the full race experience, but not much trim and sound deadening to absorb vibrations and cavitations. 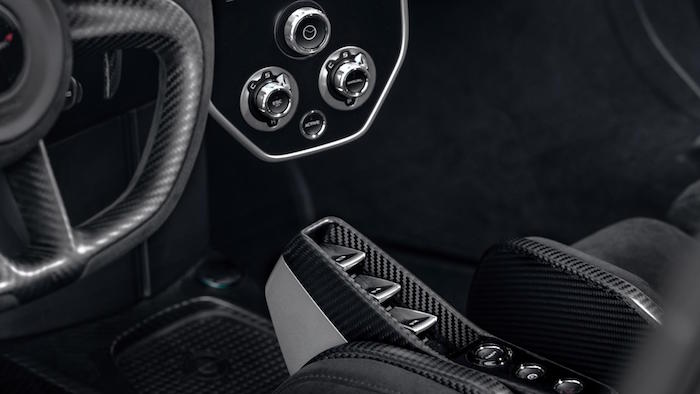 It moves easily down the pitlane, twin clutch gearbox rifling through gears, throttle easy, no sense of aggression, just a calm precision. More approachable than a P1 GTR or Aston Martin Vulcan.

Less blood, guts and thunder. They were designed to feel and act like racing cars, but this is different. Still a road car, but one like you’ve never experienced before.

By about the start of lap three I’m starting to get used to it. Starting. I’ve got a handle on the acceleration. It’s not much faster than a 720S (but then not a lot is), but it’s the stability and usability of it that’s so surprising. No skittishness from the back end, just this huge – and hugely secure – thrust. It becomes sort of… unremarkable. 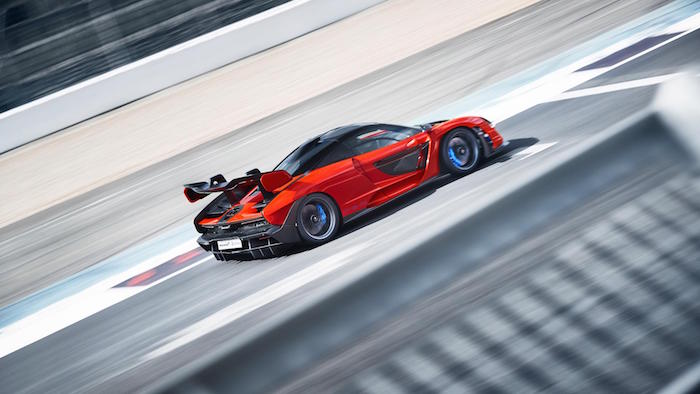 Because as I said at the beginning, 800hp is the least impressive thing about the Senna. Those brakes… Palmer won’t tell me who they’ve been developed with, but it’s not Akebono.

The technology is different, not moulded composite with inserts for the cooling channels, but laid up as solid and then drilled afterwards. “They run at much lower temperatures,” Palmer tells me, “I think about 20 per cent, which means we can size them smaller, get them lighter and still get the performance”.

Oh boy do you. The pedal feels solid initially, so what it’s going to be like on the road I don’t know, but once you get into the meat of it, really get your quads working, start shedding serious speed, it gets addictive.

Sounds weird, but I have more fun smacking the brakes in the Senna than the throttle. I’m fortunate enough to be used to acceleration of this magnitude, but not braking. How the hell do the Pirelli Trofeo R tyres cope with this abuse? It’ll stop from 200km/h in 100 metres – 16 metres less than a P1. The accuracy of the stopping, the stability when slowing from huge Hanger Straight speeds, the reassuring response of the pedal, the fact you can hit them absolutely as hard and as suddenly as your physical being will permit and they don’t lock… Addictive.

The other reason that the power seems unimpressive. McLaren claims it pulls around 0.2-0.3g more through a medium speed corner than the P1 or 720S. That’s a bit dry. How about this: at the apex of a 100km/h corner, the Senna will be doing 110km/h. 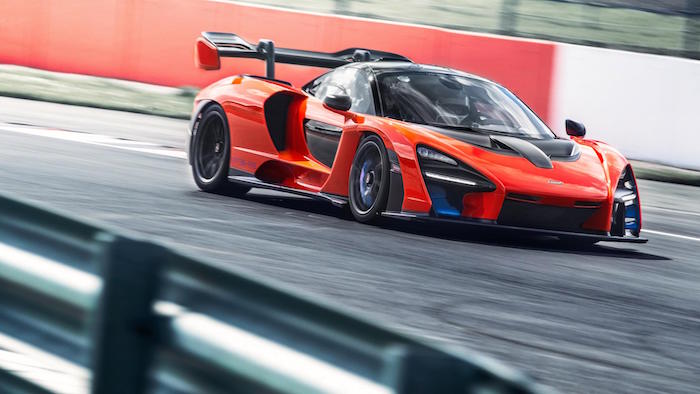 Grip is monumental, but because it goes hand in hand with the brakes, you get used to it, your brain can compute what’s going on. It’s just your central mass that protests. The steering is a delight, all inputs reflected instantaneously through a chassis whose responses are clean, pure and immediate.

So you find yourself getting utterly absorbed in the purity of driving, just operating controls. The car does exactly what you ask: ergo you have complete trust: ergo you want to go faster. Base human nature.

But are aerodynamics a good thing? Are they even relevant in a road car?

Interesting. What I took away from the Senna was the stability of the car in every situation. Yes, a couple of times I carried too much brake to the apex and the back end started to move, but the messages were clearly telegraphed, there was no sudden snatchy breakaway. On the road you’re not going to notice this to anything like the same extent, and how the suspension behaves when faced with ruts, cambers, potholes and the usual road debris remains to be seen.

It sets out to be something new, something unlike anyone else is doing (although the Aston Valkyrie and AMG Project 1 are coming…), gives itself a very clear brief and then accurately fulfills it. It’s calmer than the 675, more planted – that’s what the aero brings. The car is faster than you. Braver than you. Better than you. This is what I learned. Even towards the end of my session I was still missing apexes. Why? Because my brain couldn’t keep up.

As a road car driver, my brain does not function fast enough to keep up with the Senna. You’re going into corners way quicker than you ever have before, realising too late that you’re actually 25 metres further down the road than you thought you were. It’s nuts. 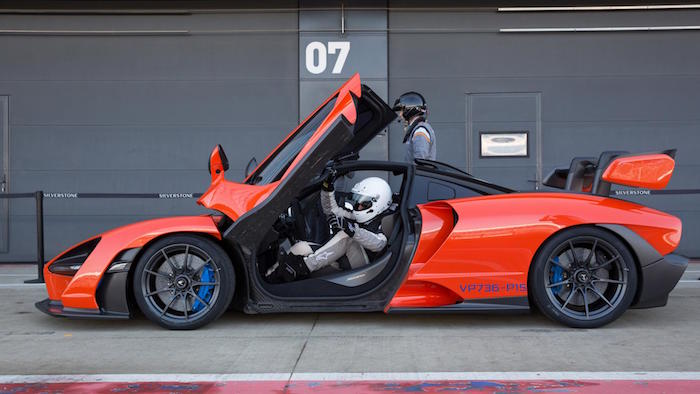 Apart from braking. There, I was always too early. I wasn’t alone though. Bruno Senna had a go after me. He came back in saying he still wasn’t being brave enough with the brakes at the end of the Hanger Straight.