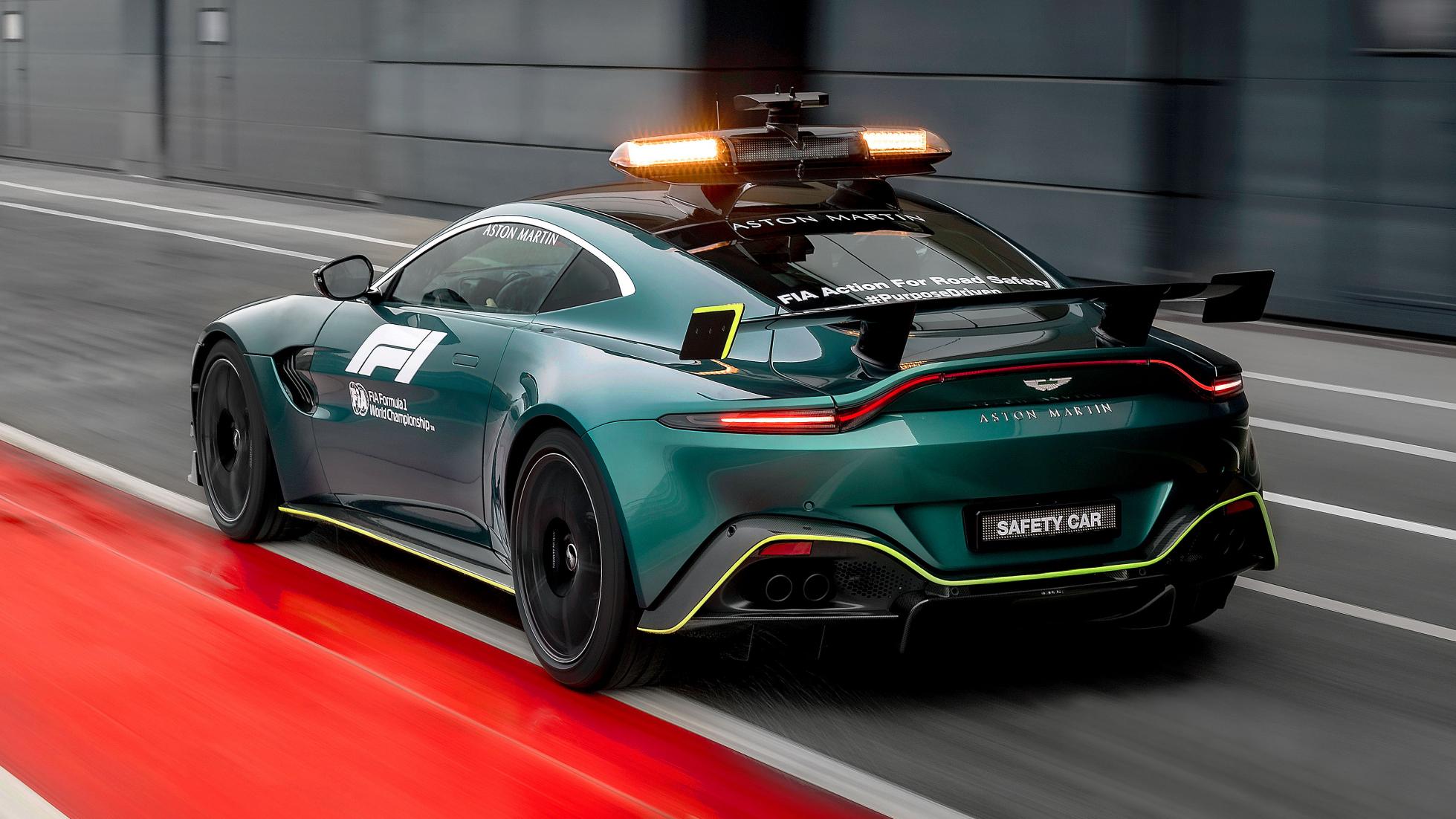 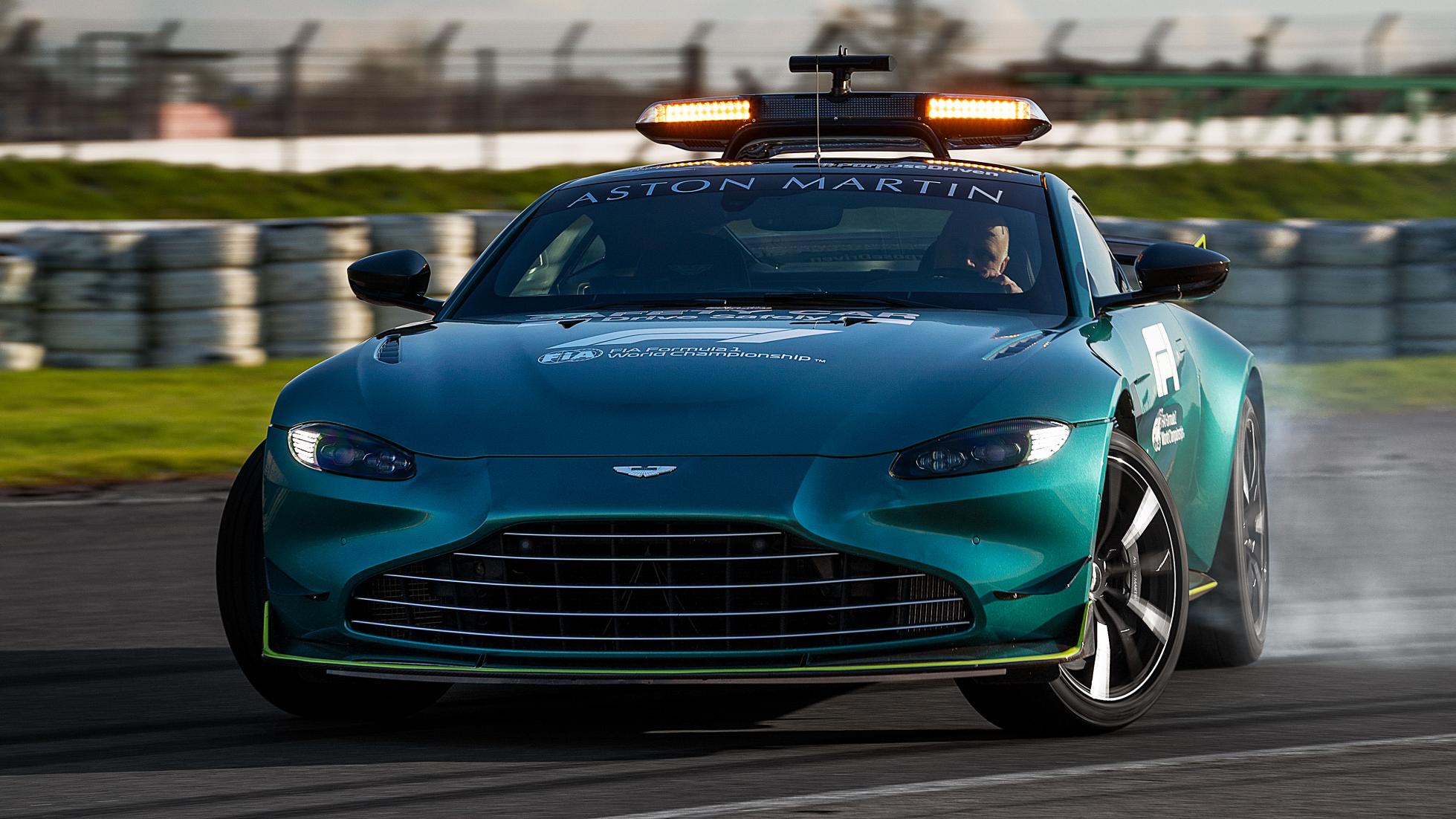 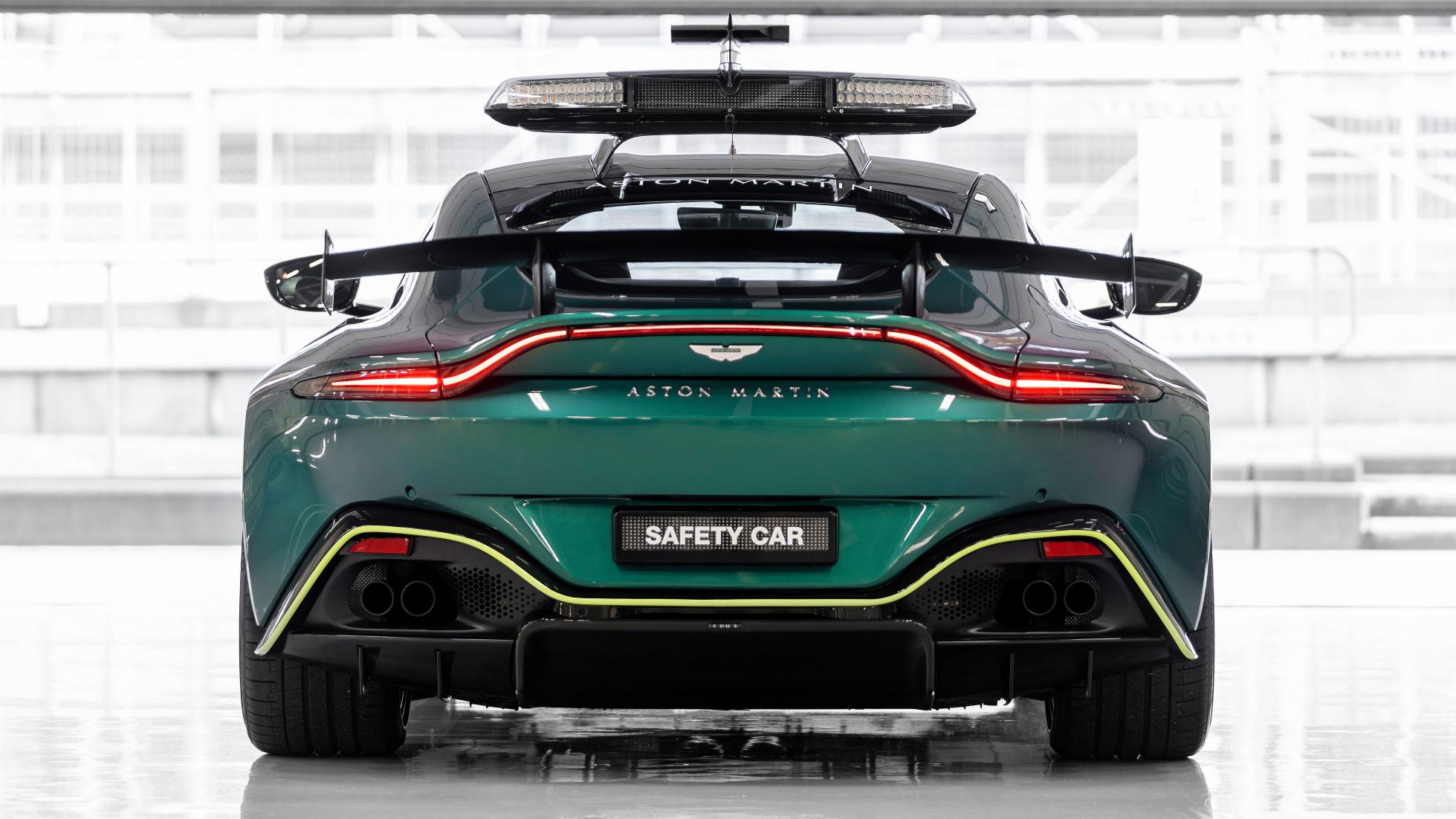 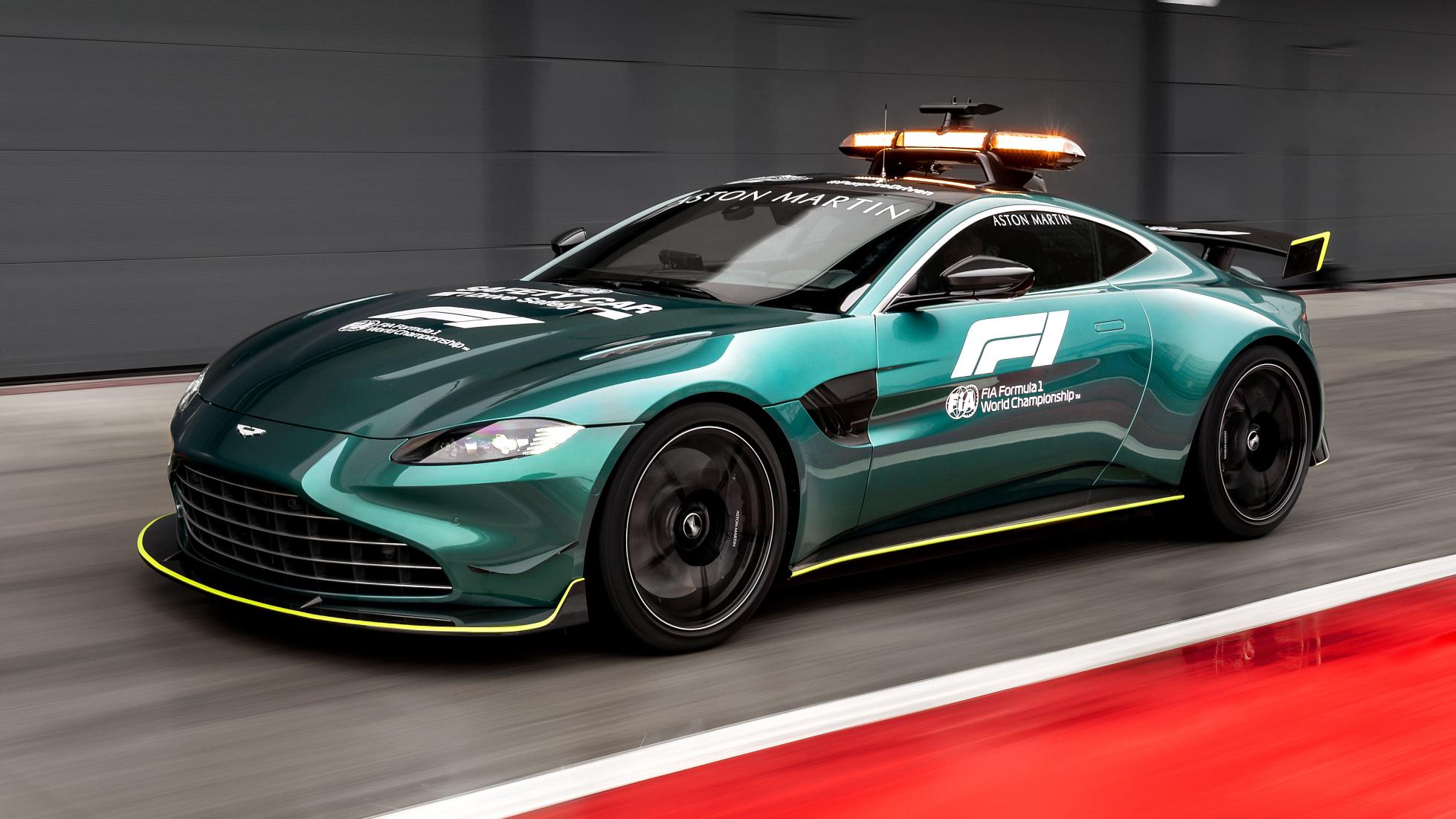 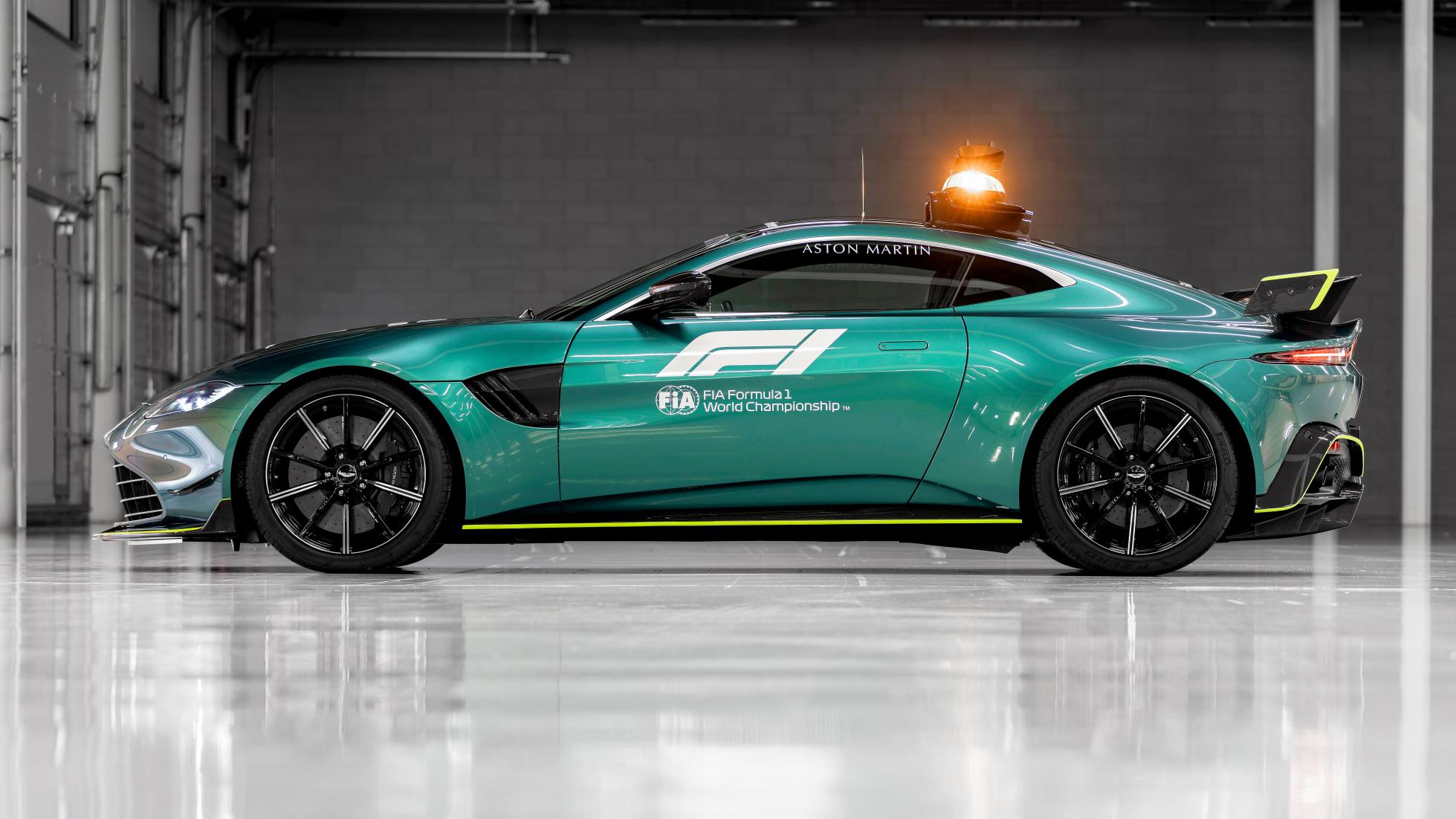 Barring a cameo from an Escort Cosworth at the ’93 British Grand Prix though, few have been as ice cool as this. This is the new Formula One safety car. Aston Martin calls it the Vantage, Bernd Mayländer calls it his new company car.

It’s no ordinary Vantage, of course, and nor should it be – you have to come up with something special to replace the Mercedes-AMG GT R.

And lo, there’s more power. The AMG-sourced 4.0-litre turbo V8 has been treated to a modest power boost – up from 510hp to 530hp. Torque remains the same at 685Nm, though in this instance it is “sustained for longer”, and some work has been done on the transmission.

This, we’re assured, means Mr Maylander should have “a better sense of directness, precision and control through upshifts and downshifts”.

Obviously we have questions. 1) Why didn’t Aston stick its socking great V12 in the nose? 2) Is Bernd worried the Vantage is less powerful than the outgoing, already track-capable GT R?

Anyway, do pay attention 007. There’s a load more downforce, too. A new grille and front splitter together create 155.6kg of the good stuff at 200km/h, which is 60kg more than a regular Vantage achieves at the same speed.

The front’s been stiffened, the suspension and dampers have been tweaked, and it gets a new aero kit and low profile tyres.

Also, a really lovely wing. Not as lovely as the new 911 GT3’s swan-neck offering (will rear wings ever be the same again?), but nice nonetheless. 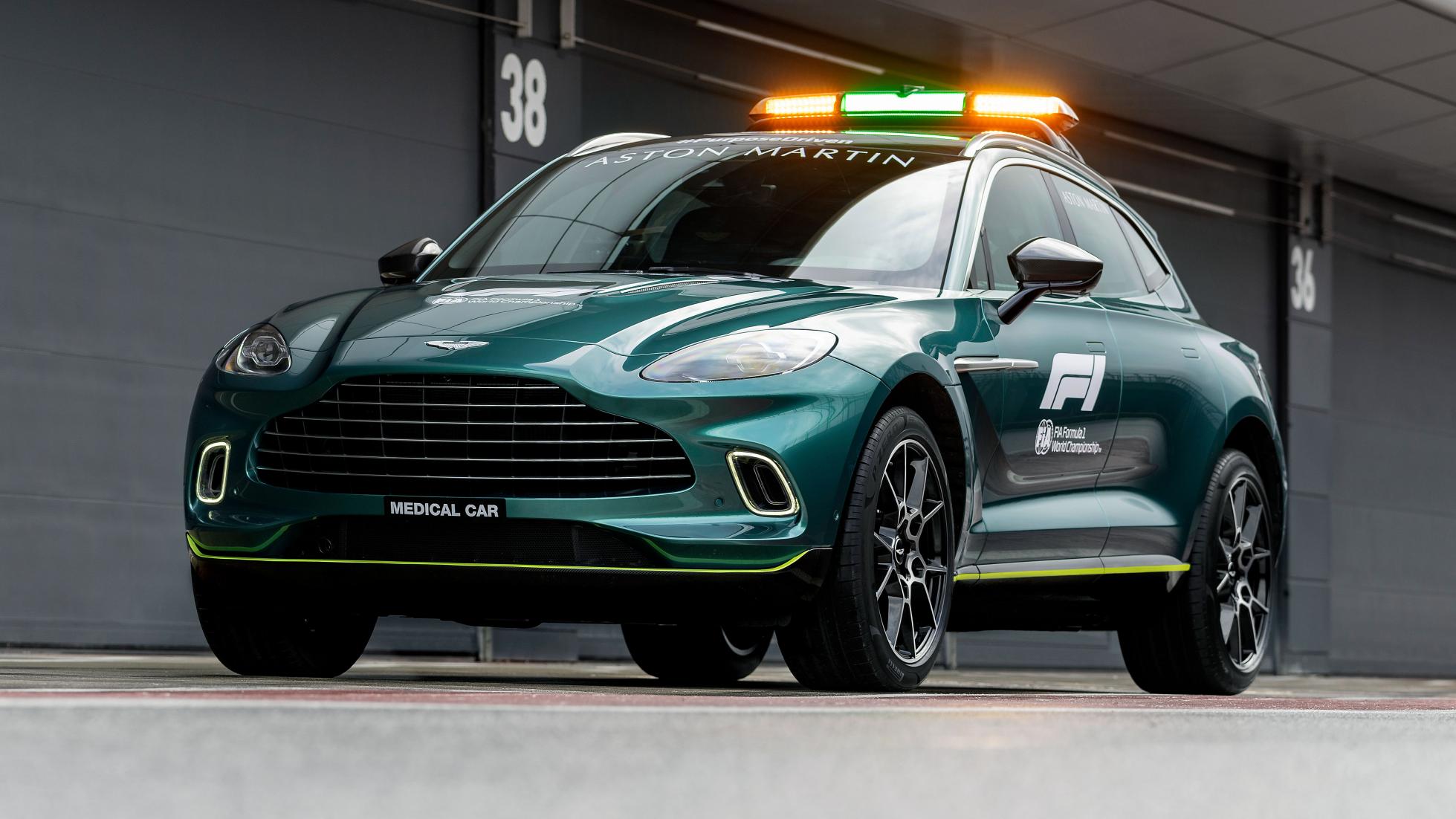 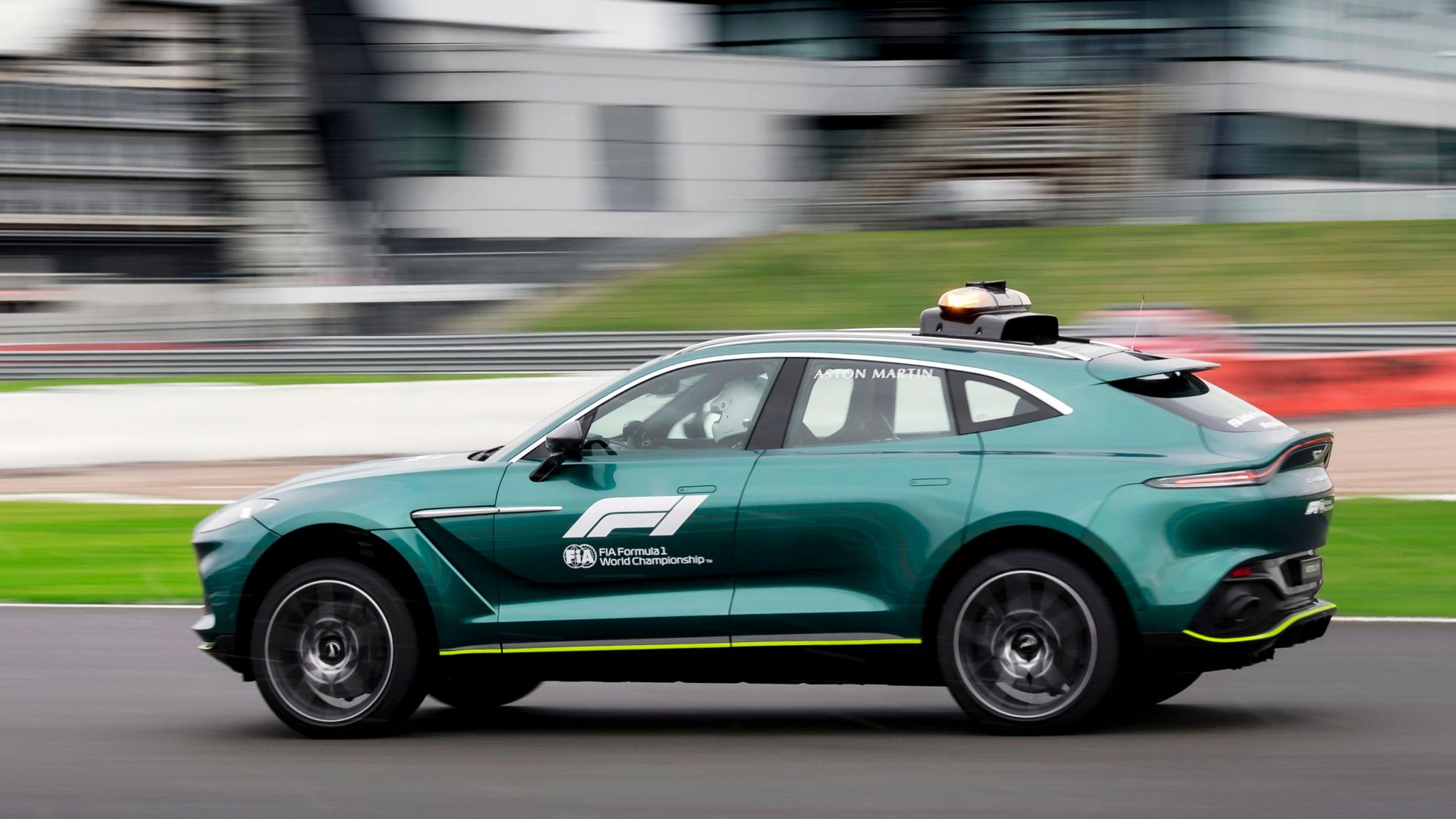 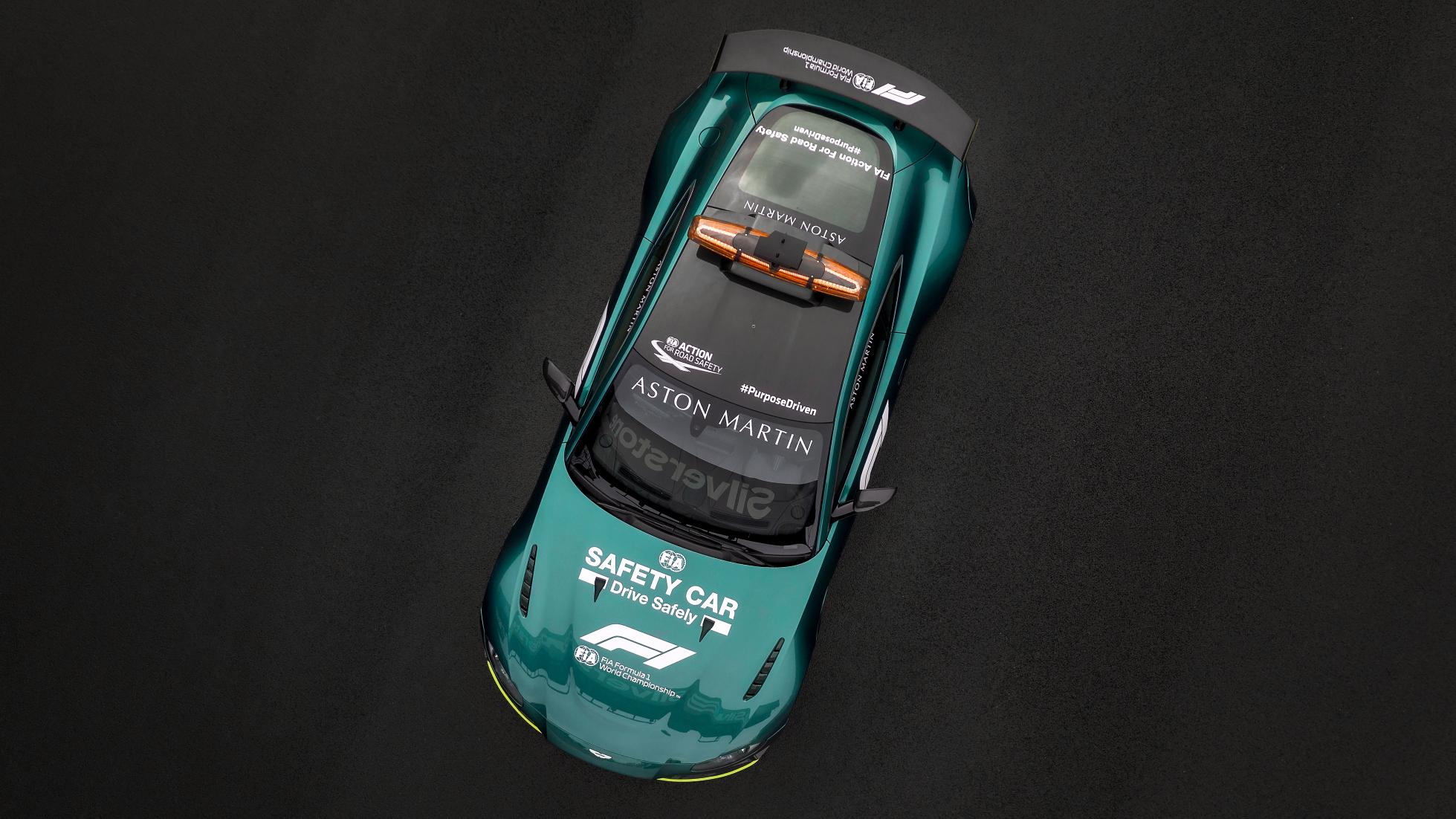 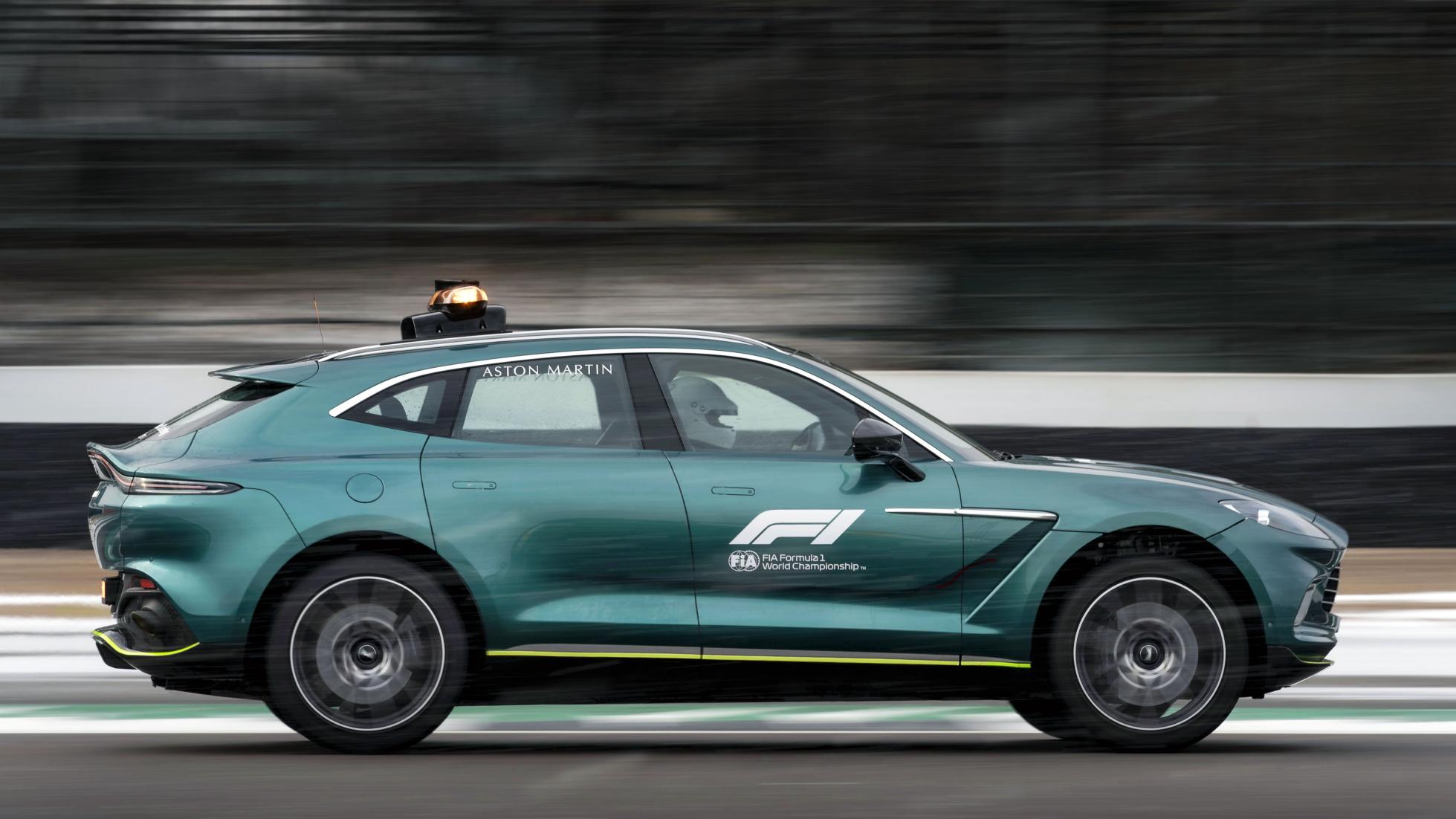 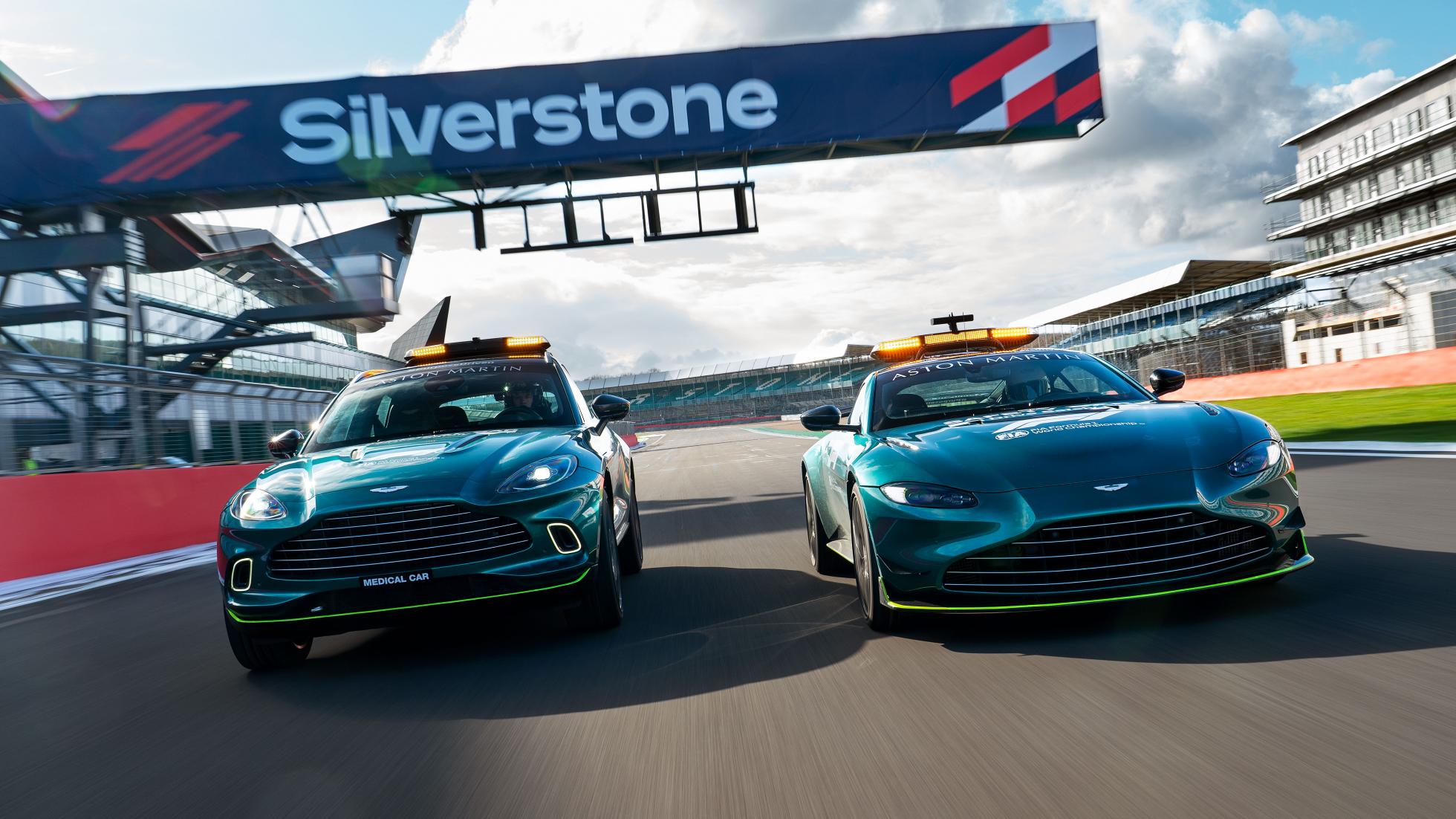 Two FIA-approved racing seats replace the standard Vantage chairs, bolted in behind a pair of dash-mounted screens, and a switch control system with many buttons.

Sadly, it appears none of them operate smoke screens, or a bullet deflector, or a seat ejector. Bit disappointed by that, if we’re honest.

Oh, and there’s more. The Aston Martin DBX is now the official medical car of Formula One. Same 4.0-litre V8, more power than the Vantage – 550hp.

The DBX’s centre rear seat has been binned so that all the necessary equipment can be housed – fire extinguishers, medical bag, defibrillator etc – while the remaining four seats are buckets. This too has screens up front.

“I am extremely proud of the Aston Martin brand’s return to Formula One for the first time in more than 60 years,” said boss Moers.

Wonder how he feels about his old baby – the AMG GT R – being given its retirement papers?

Turns out Aston Martin will split F1 safety & medical car duties with Mercedes-AMG. Aston’s Vantage safety car and DBX medical car will make their debut at the first race of the season in Bahrain, but the good ol’ AMG GT R and C63 Estate (now painted bright red) will return for the Emilia-Romagna GP at Imola a couple of weeks later.

The rest of the season will be split between the two manufacturers – the last time this happened was in 1996.

Both Aston and Mercedes safety/medical cars will be driven by Bernd Mayländer and Alan van der Merwe respectively. Mercedes-Benz has facelifted the E-Class Coupe and Cabriolet