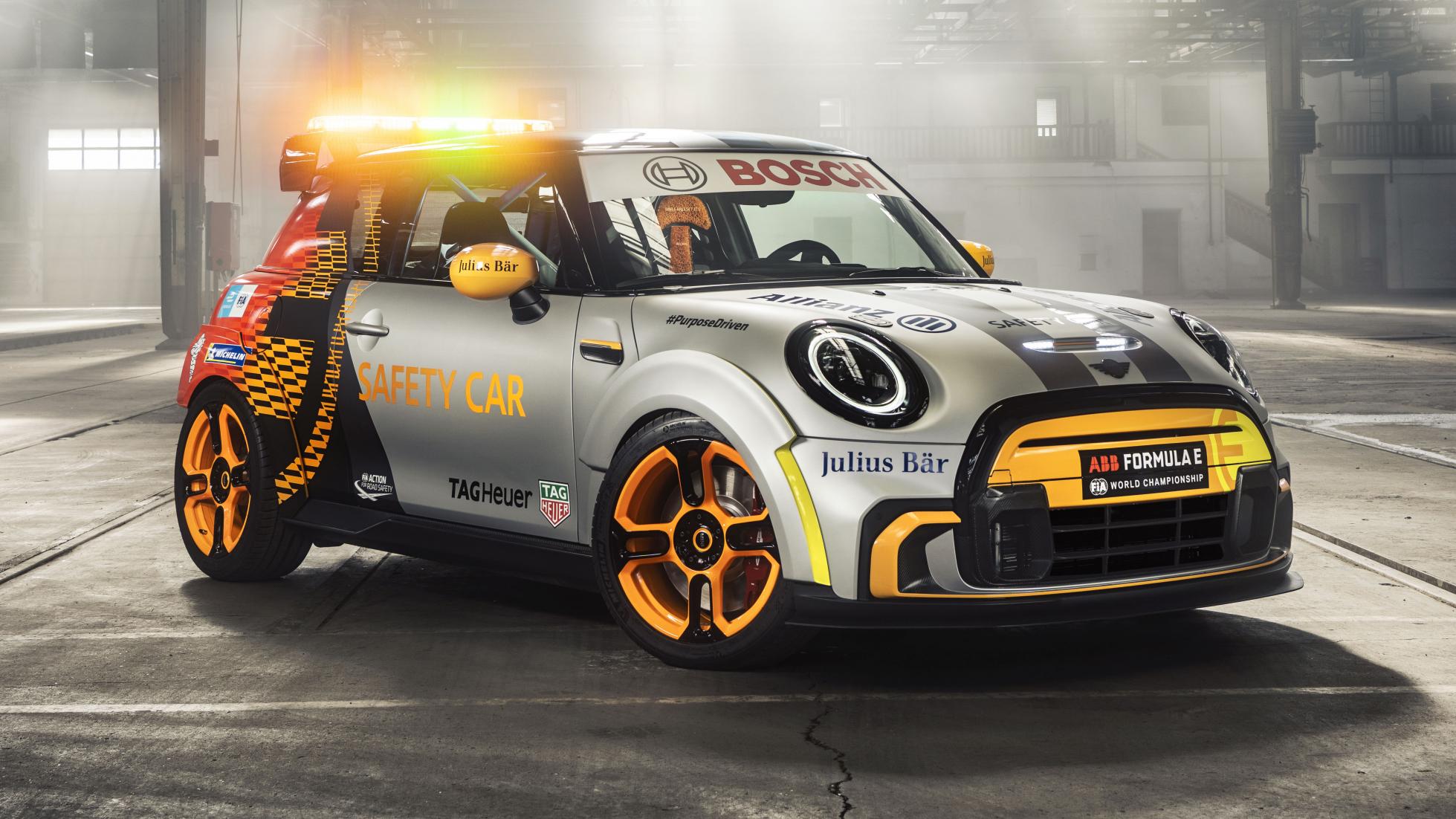 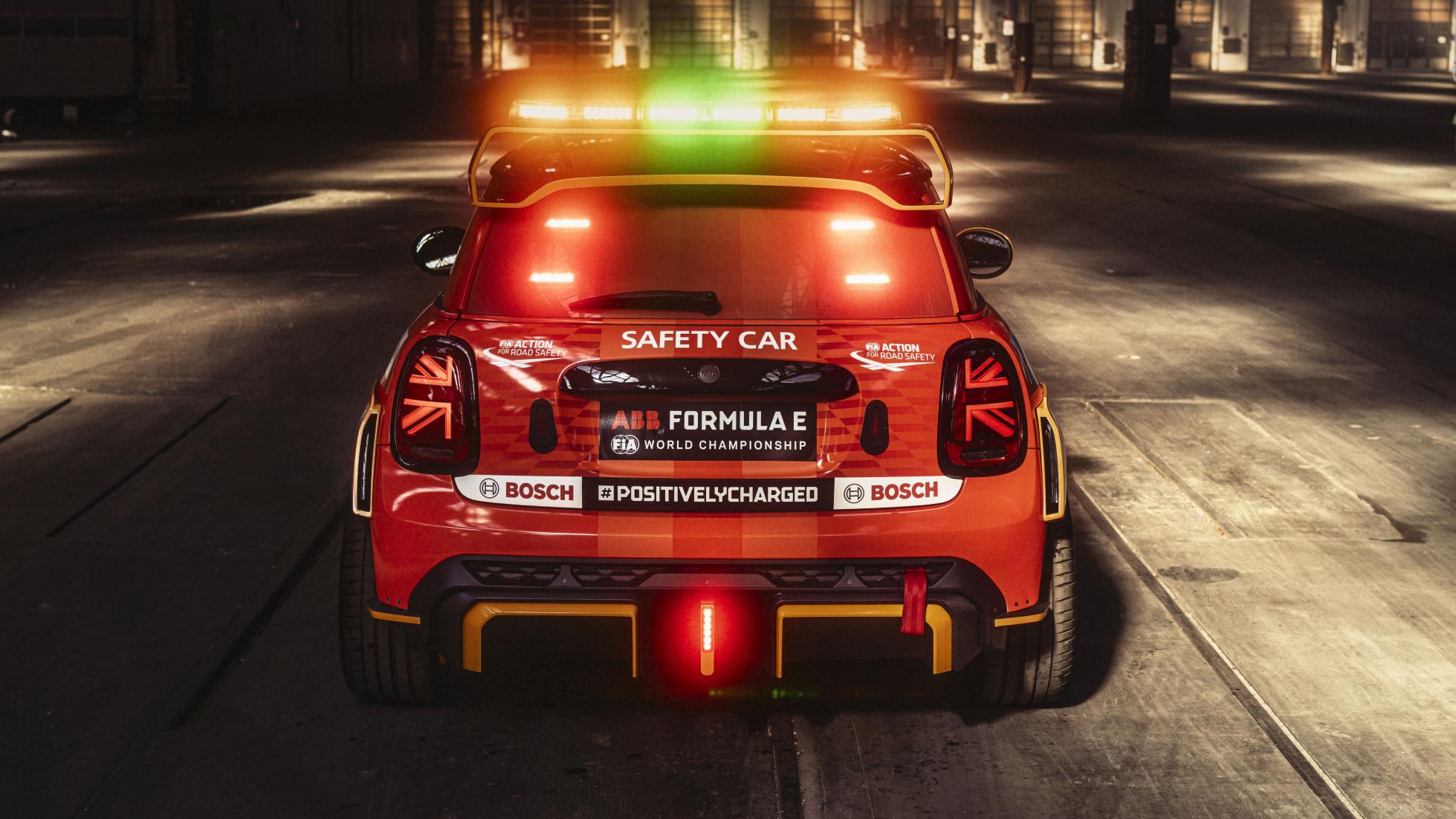 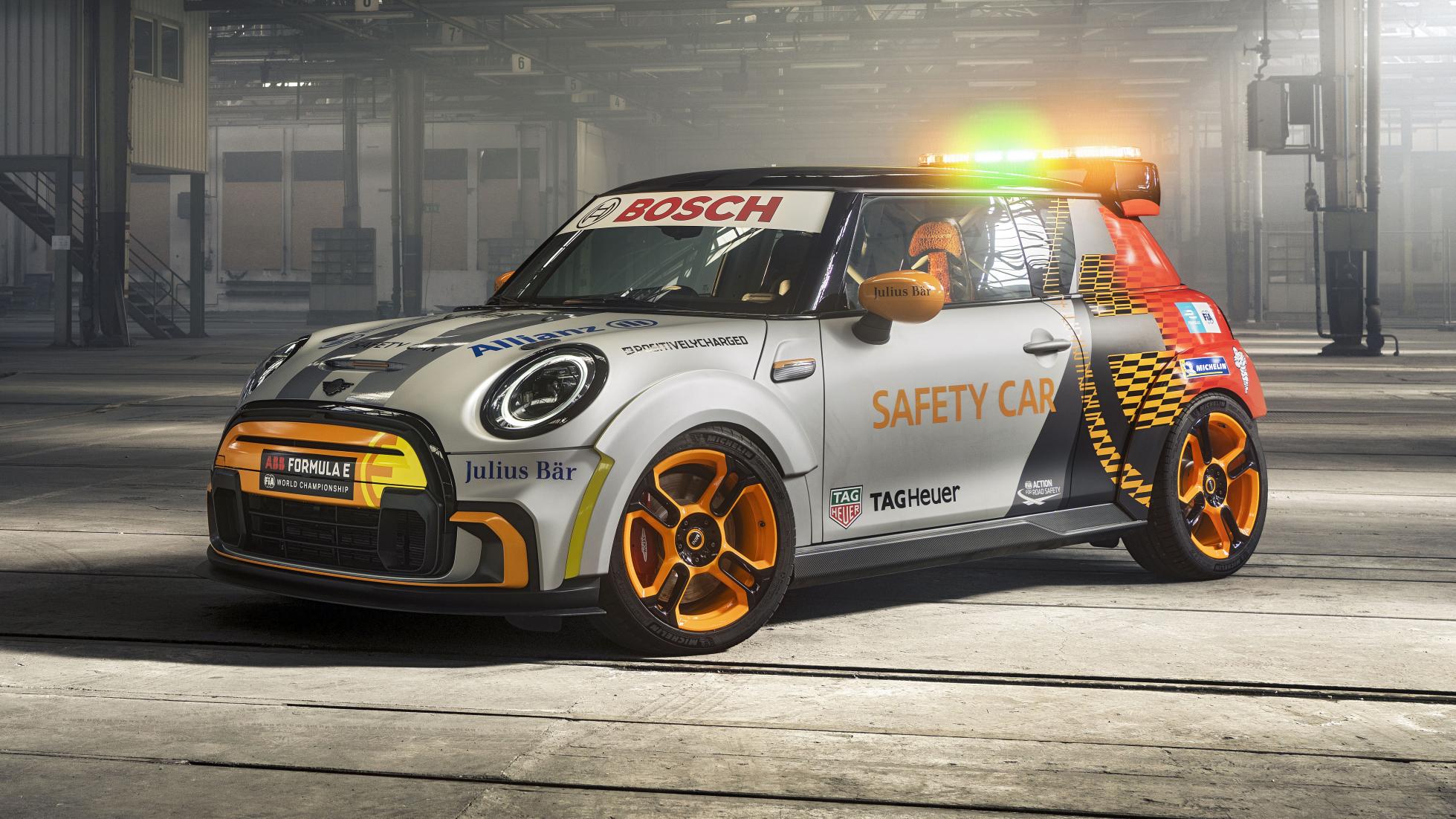 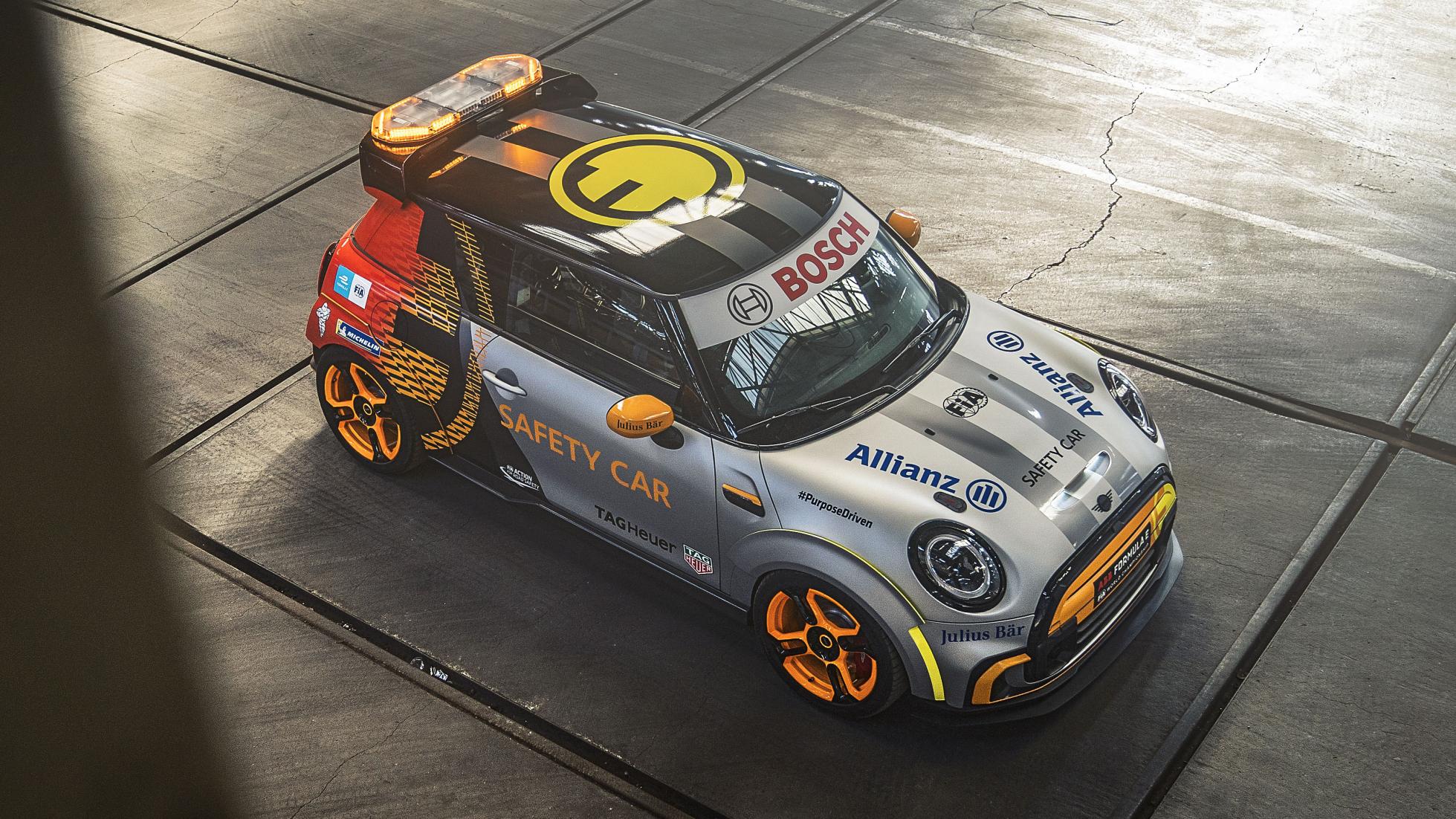 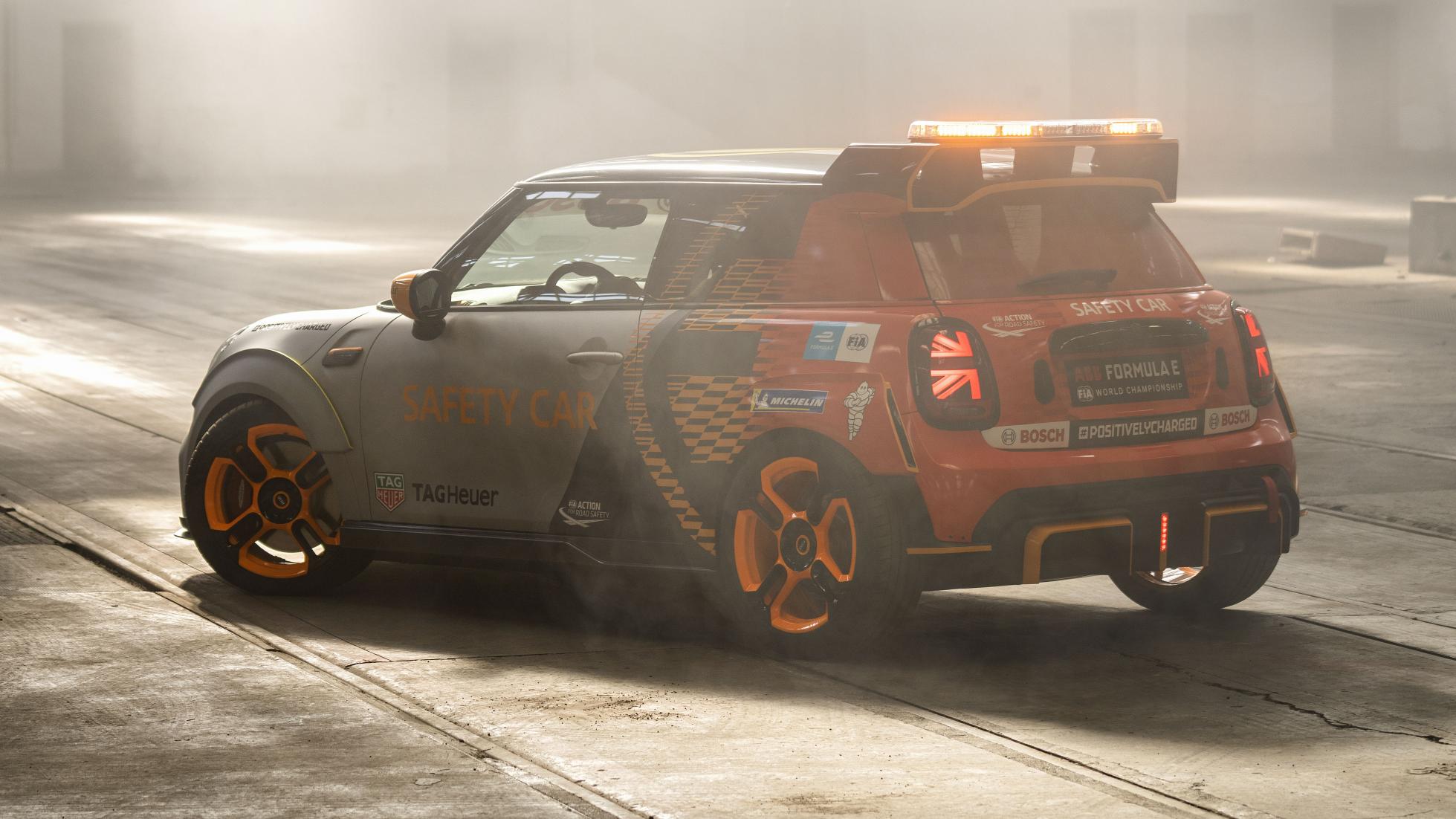 This bright little bundle of batteries is the new safety car for Formula E. It’s called the MINI Electric Pacesetter, and in its maker’s own words, is “the most dynamic interpretation yet of a MINI with all-electric power”.

It was developed in collaboration with BMW’s Motorsport arm, and the transition from the regular, road-going all-electric MINI Cooper SE to this track-honed bulldog is stark enough to warrant some discussion. Yeah, we’re gonna need a montage.

The battery and motor setup mirrors the road car’s – so 184hp, 280Nm of torque – only here, it’s pushing considerably less weight. BMW Motorsport’s worked its magic over the MINI, dropping some 130kg. It now weighs 1,230kg.

Both front and rear aprons are lighter than before, ditto those new flared arches. The new front splitters, blanked off grille (remember it’s electric, so doesn’t require a rad) and new brake cooling apertures lend credence to the whole ‘I’m a friendly bulldog’ vibe. The lights required for its flashy new role are incorporated into the bonnet.

There’s a modest side skirt betwixt not-so-modest, 18in bright orange, forged alloy wheels. Because it’s a track-only one-off, there’s the requisite roof-mounted rear wing – a 3D-printed wing, no less – complete with another row of lights, while that new rear apron has ‘cut-outs’ around the rear wheels. 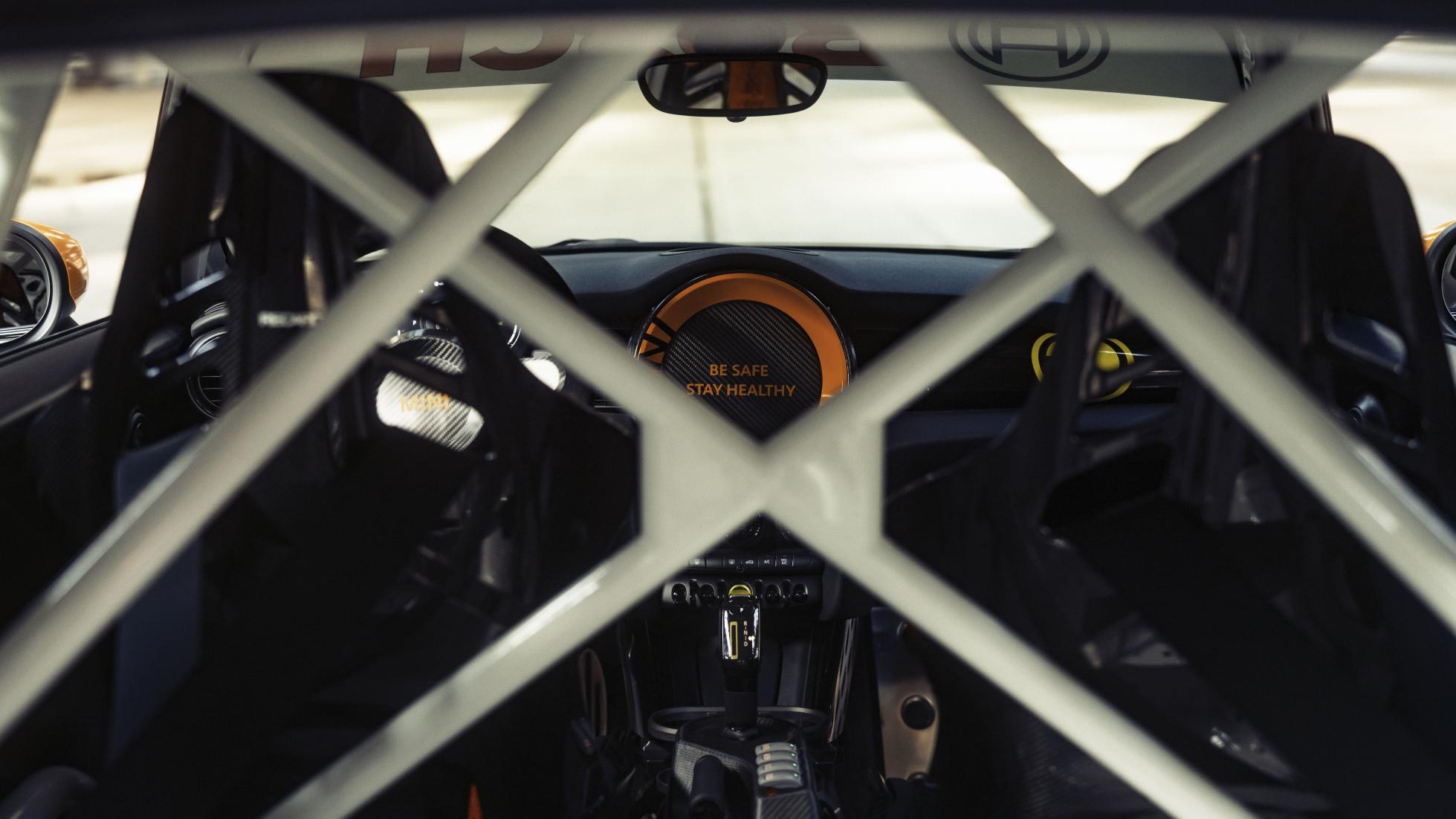 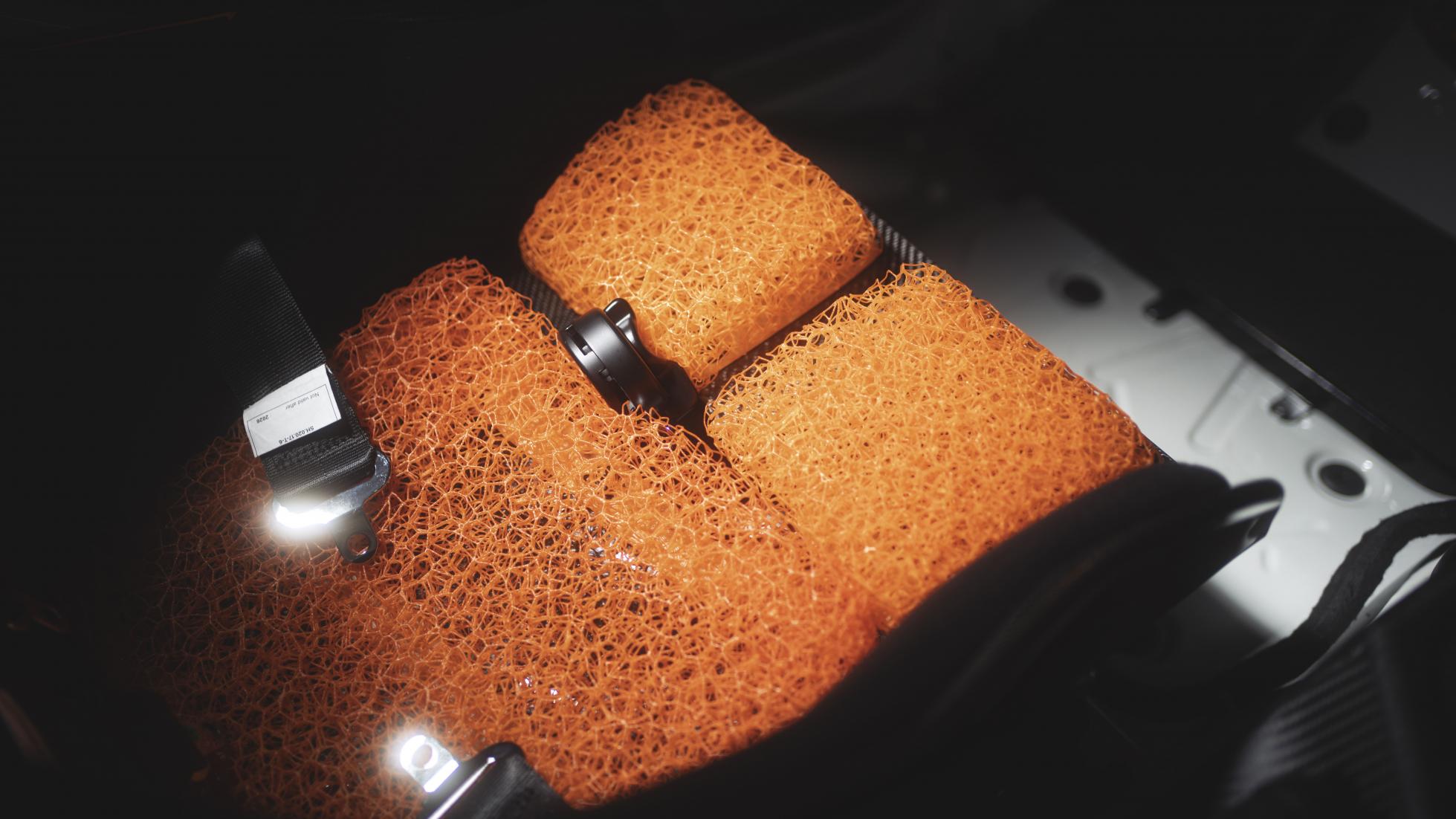 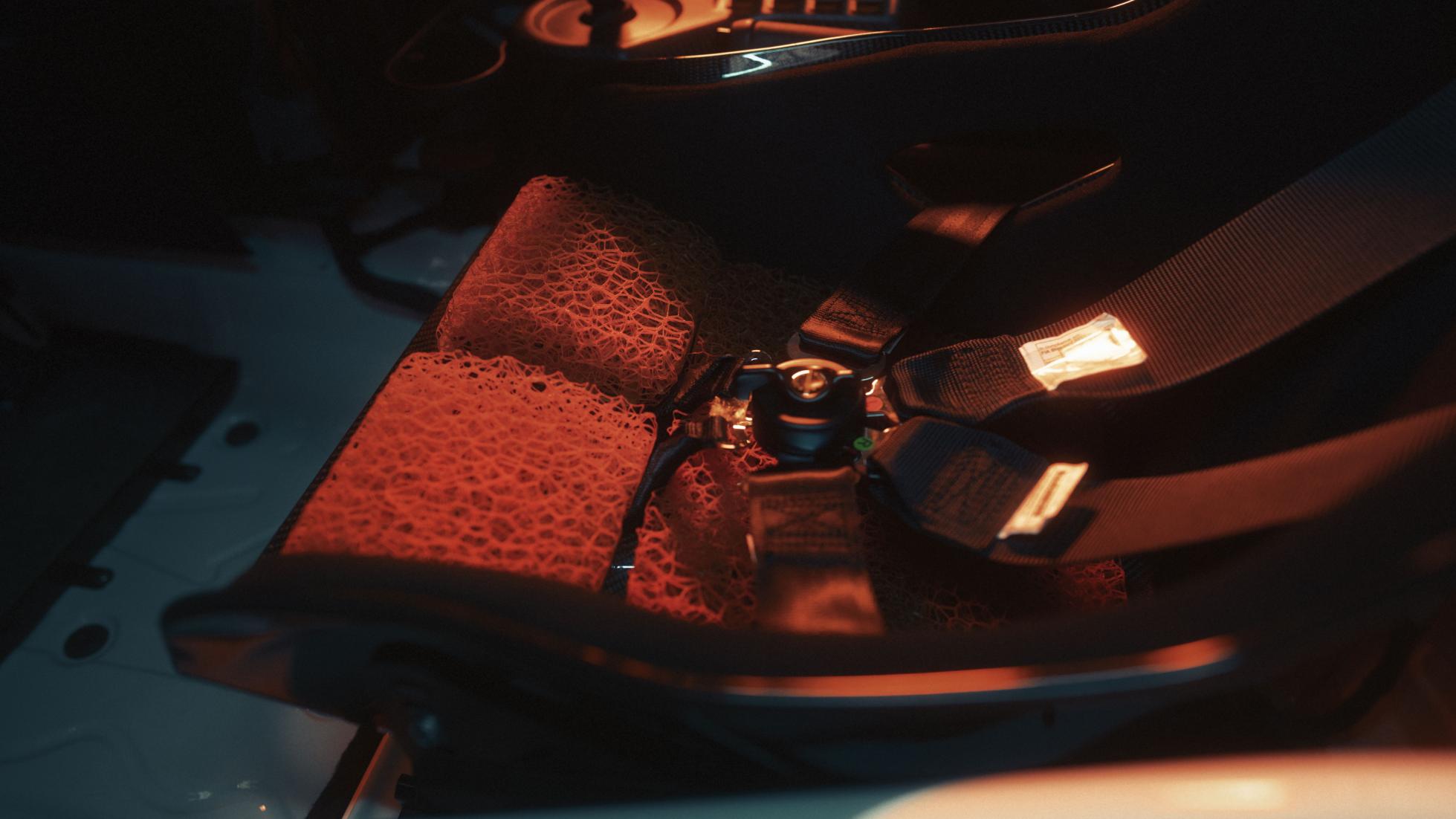 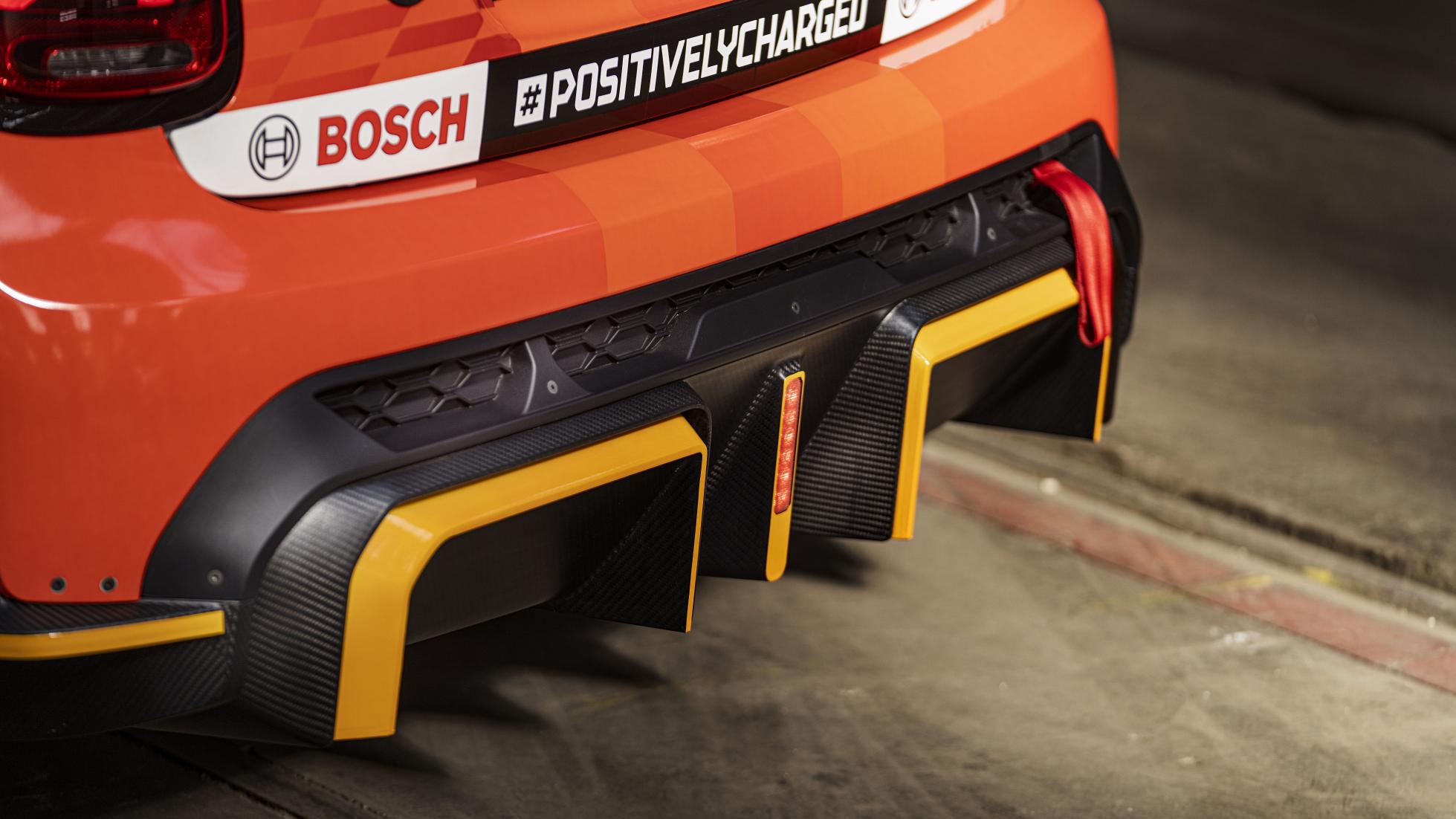 It’s been gutted inside, too, with only a pair of racing seats (and harnesses) remaining. There’s a steering wheel of course, some pedals, carbonfibre coverings for the gearshift, the handbrake and indicators, and more carbonfibre adorning the door panels. Oh, and a massive roll cage. Barring the roll cage, a lot of this interior was 3D-printed.

The weight loss has sharpened up the 0-100km/h time – 6.7s vs the production car’s 7.3s – and dropped the 0-60km/h time down to 3.6s from 3.9s. There’s the usual patter about ‘go-kart feeling’ [*shudders], here delivered via three-way adjustable suspension, race-spec control arm mounts, a wider track, and massive four-piston brakes from the MINI JCW GP.

“This extreme version of the MINI Electric has been developed as the safety car in Formula E, so is clearly not intended for use on public roads,” explains MINI boss Bernd Körber. “But it does reveal one of the directions we could take with the electrification of the JCW brand.

“For me, the message is clear: electrification and John Cooper Works are a good fit,” he added. 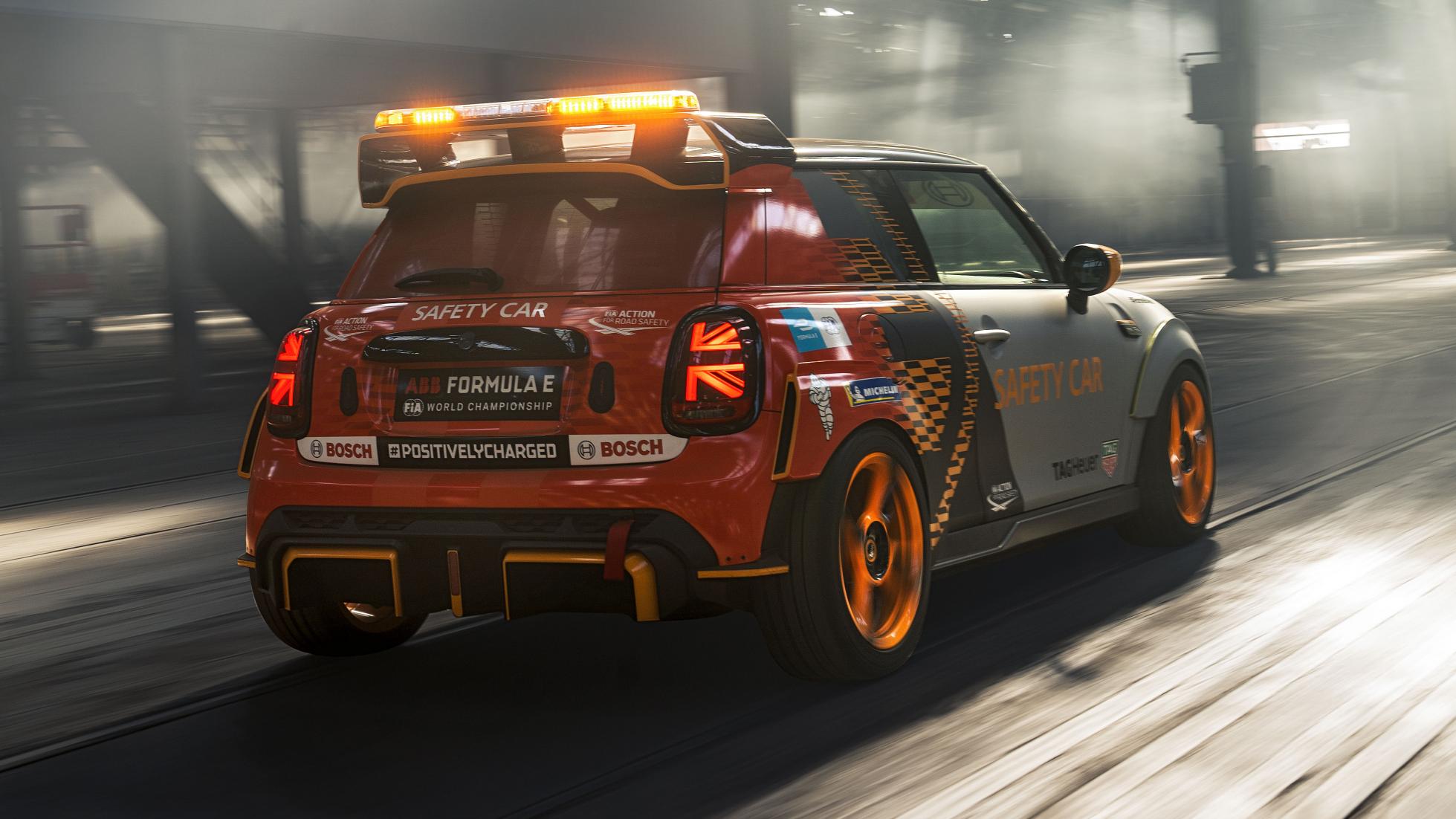 The MINI Vision Urbanaut is all about space

MINI's autonomous concept is basically a lounge on wheels