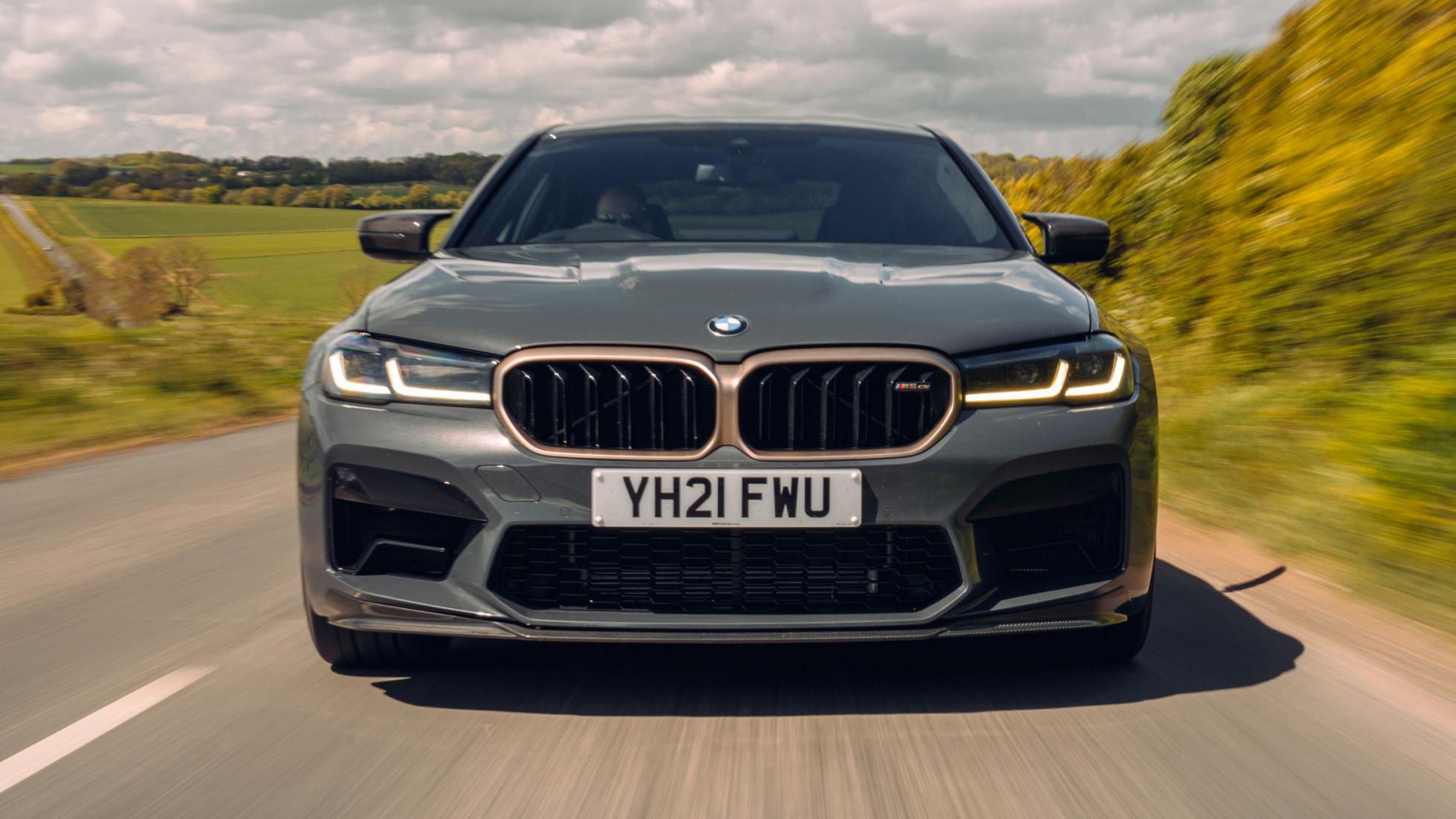 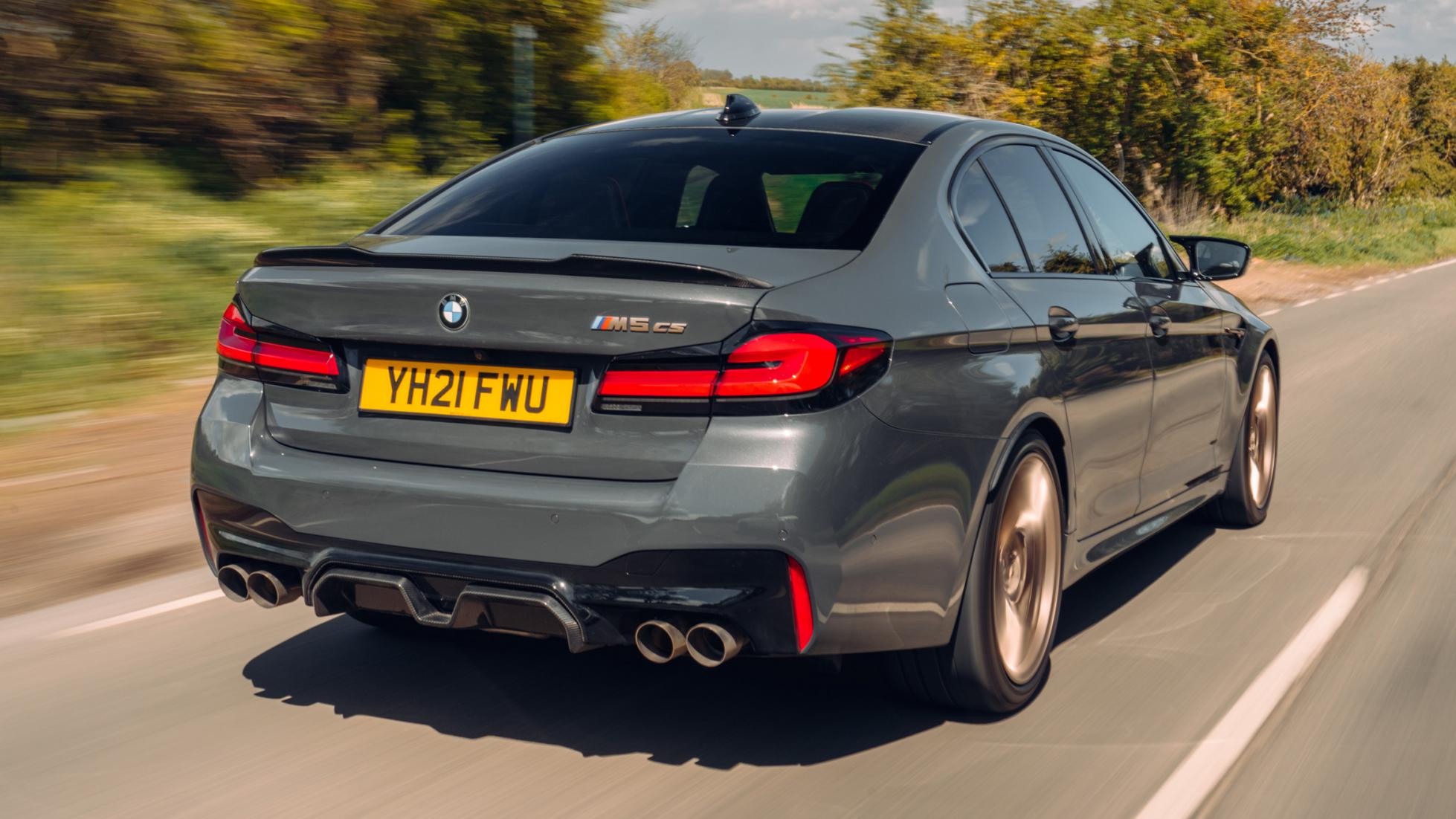 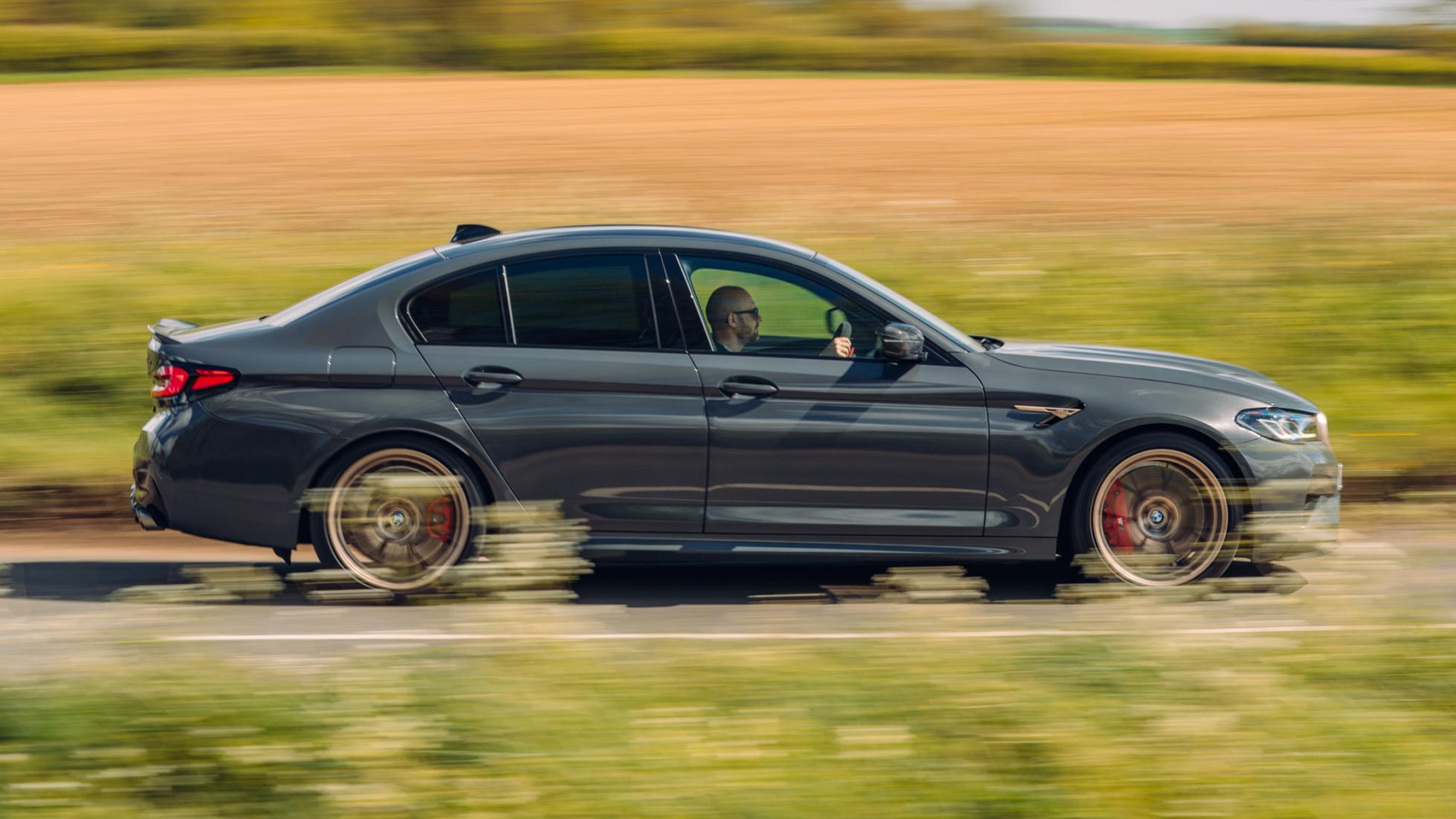 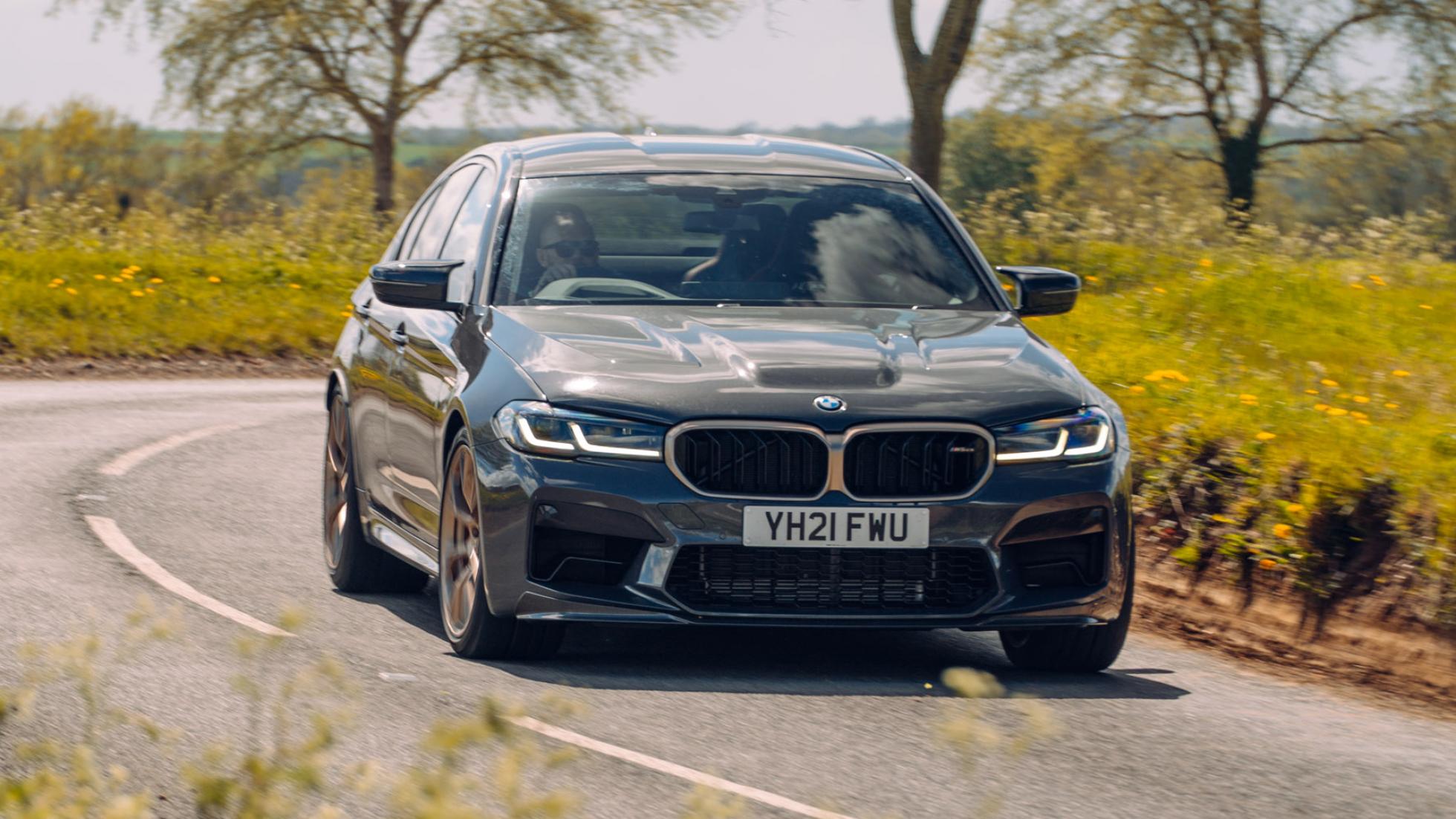 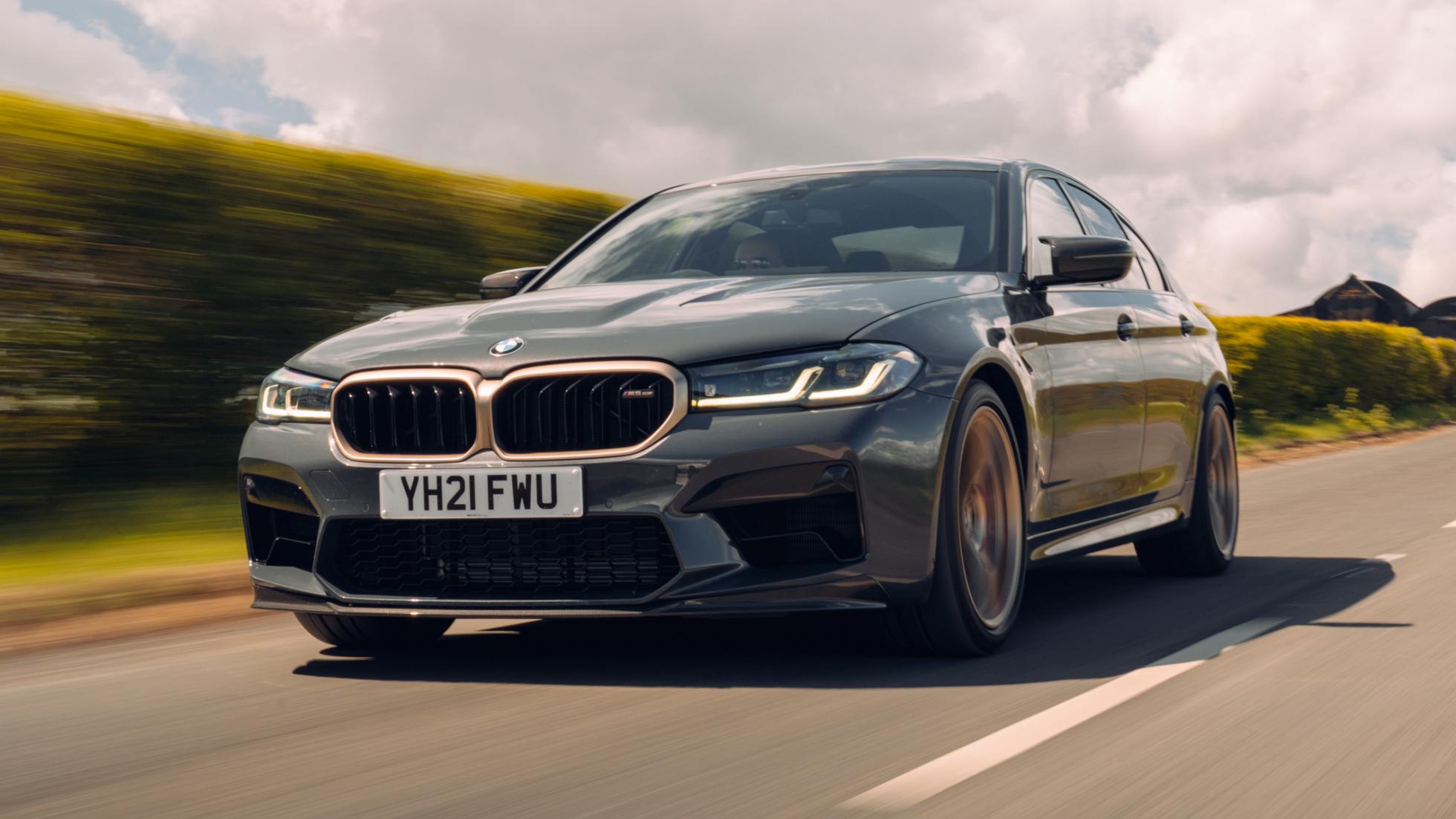 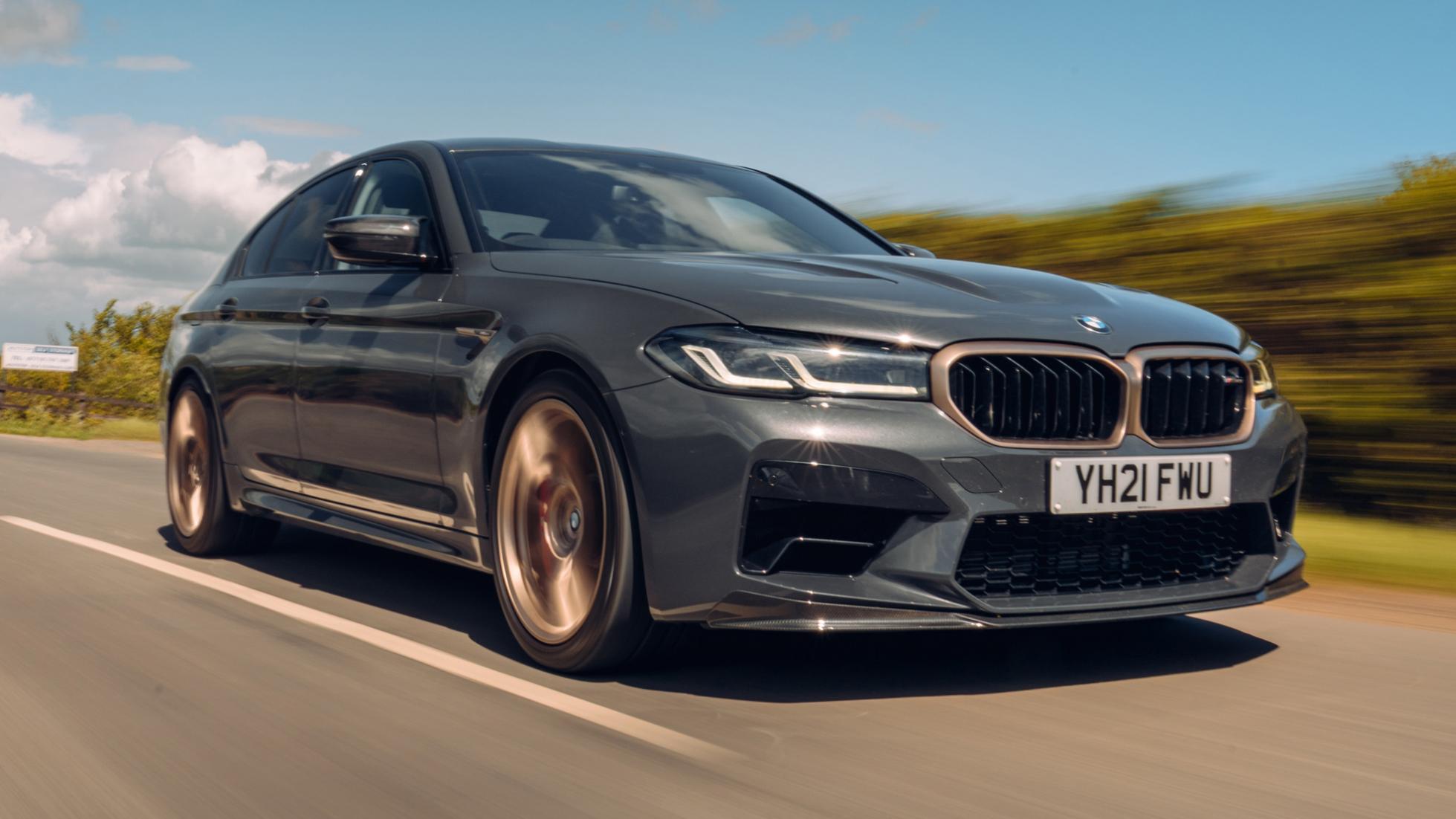 A lightweight version of a heavy car? I expect we’ll be seeing a lot more of this as we enter the electrical age.

But yeah, the idea of the M5 CS didn’t sit easily with me. I couldn’t see the point of it, or more accurately, what BMW was trying to achieve with it.

But then I drove it.

And it all made sense?

Yep, but before we get to that we need to do more backstory, because it helps frame the car.

This is not a limited edition model. BMW will build all they can sell of ‘the most powerful car in the history of BMW M’.

What’s more I wouldn’t be surprised if this is currently the only M5 they’re producing.

BMW has previously admitted that once the Competition arrived (it was facelifted last year), no-one bought the cheaper standard M5 anymore.

Stands to reason that when the CS lands, that’s the one everyone will want. The difference here is that the price uplift is… considerable

How much does it cost?

Circ. S$692,888k before COE - probably the most expensive M car currently available (taking over from the M8 Competition).

Won’t the weight savings account for the quicker acceleration?

Possibly. But it’s still an 1,825kg car… In fact that’s not actually that heavy these days is it?

Especially for a big four door sedan with four wheel-drive and a twin-turbo 4.4-litre V8.

It’s only 100kg heavier than the new BMW M3 – a car with two fewer cylinders that doesn’t have front driveshafts – and we’ll be coming on to talk about that, well, now actually.

The M5 CS borrows some kit from the new M3 in its weight saving quest, most notably the questionable front seats.

They are brilliantly comfortable and supportive, perhaps some of the very best chairs fitted to any car today.

Provided you don’t left foot brake. If you do your left leg has to negotiate the carbon… podium between your thighs.

The seats must save a dozen kilos or more, and because they’re more slimline (not to mention see-through) they also pay dividends for those in the back: more legroom and a greater sense of space.

I used to run an M5 and one of my gripes was that the front chairs were so bulky and dominant they made the rear feel small and dark. 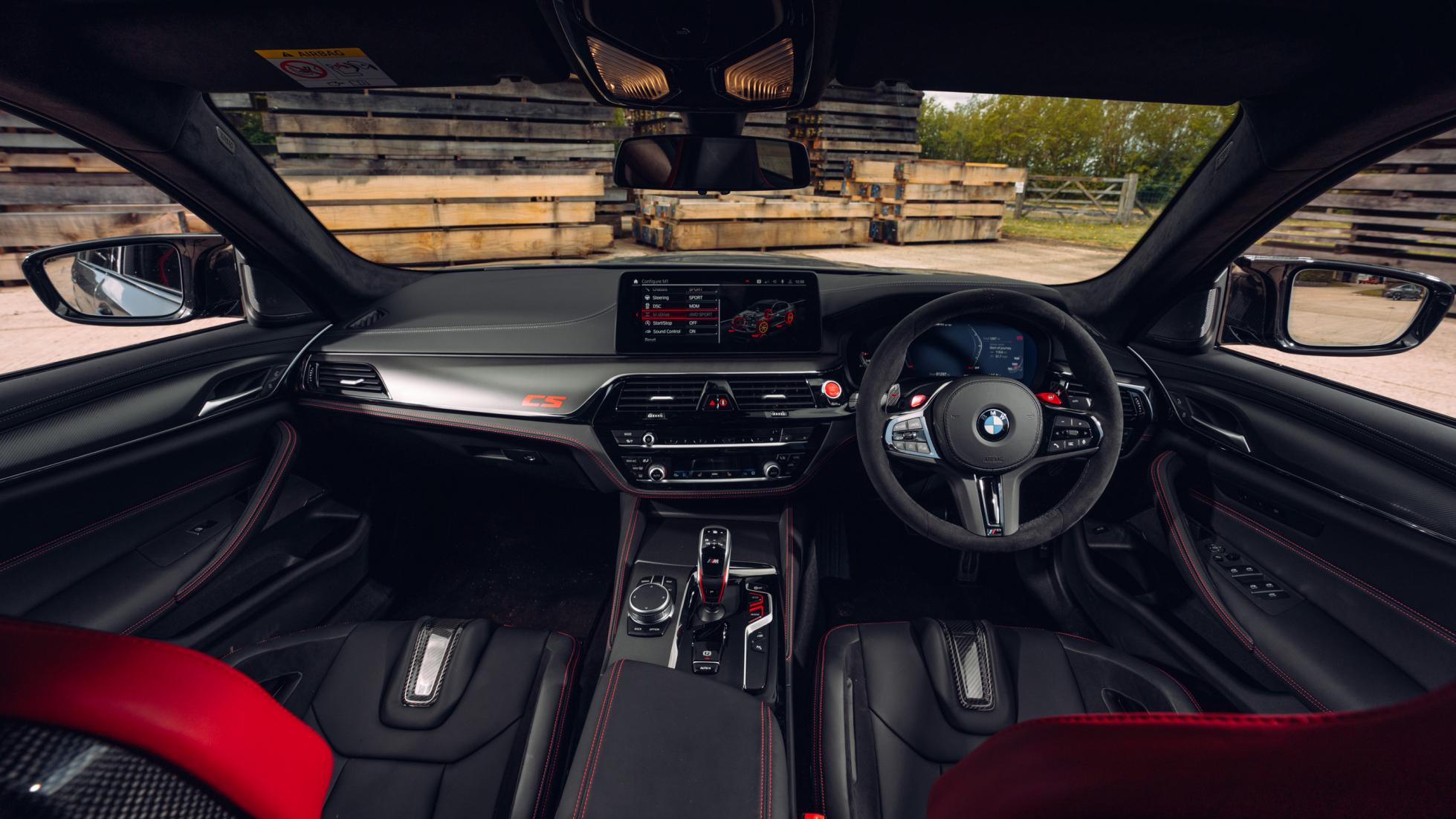 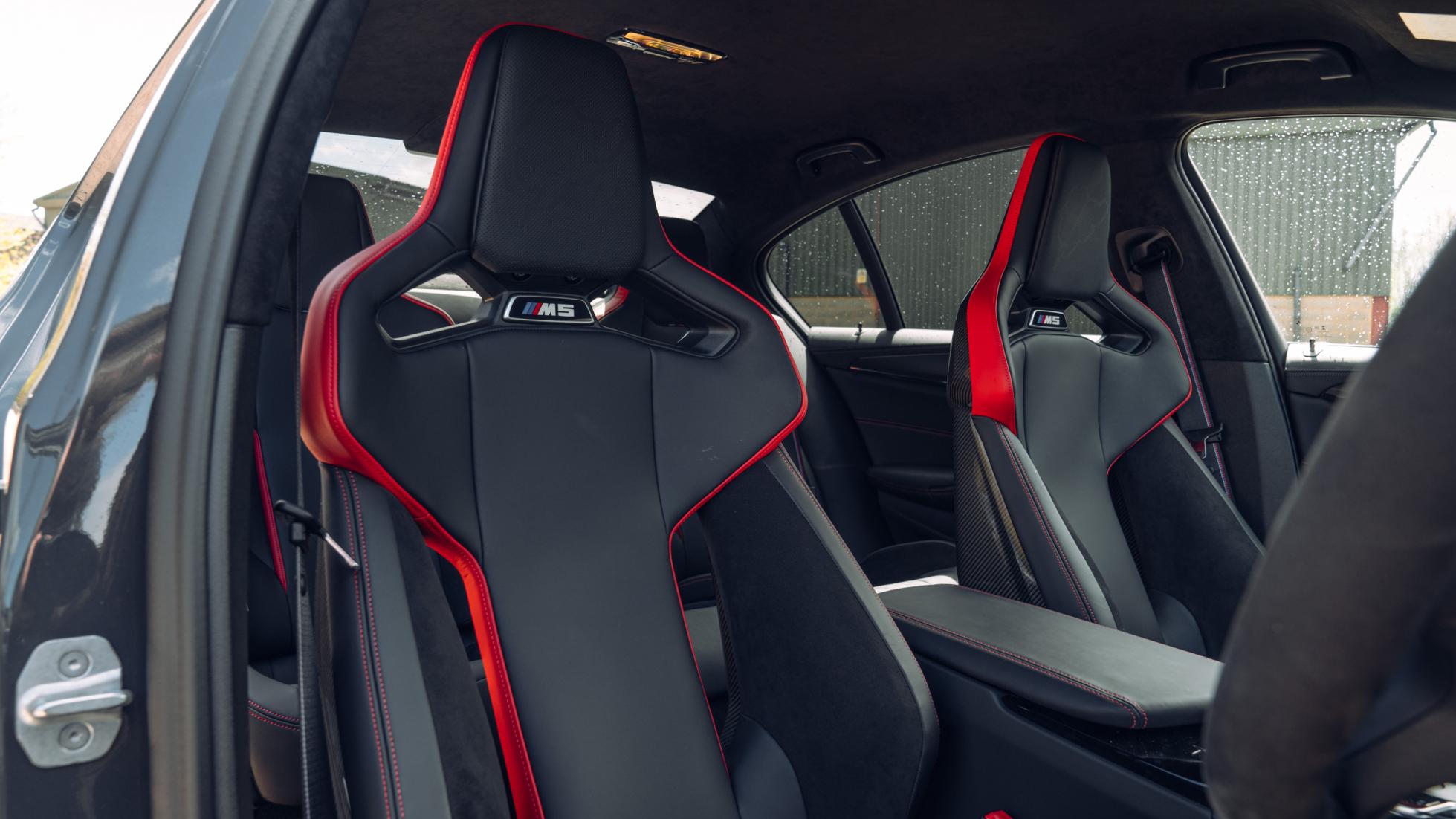 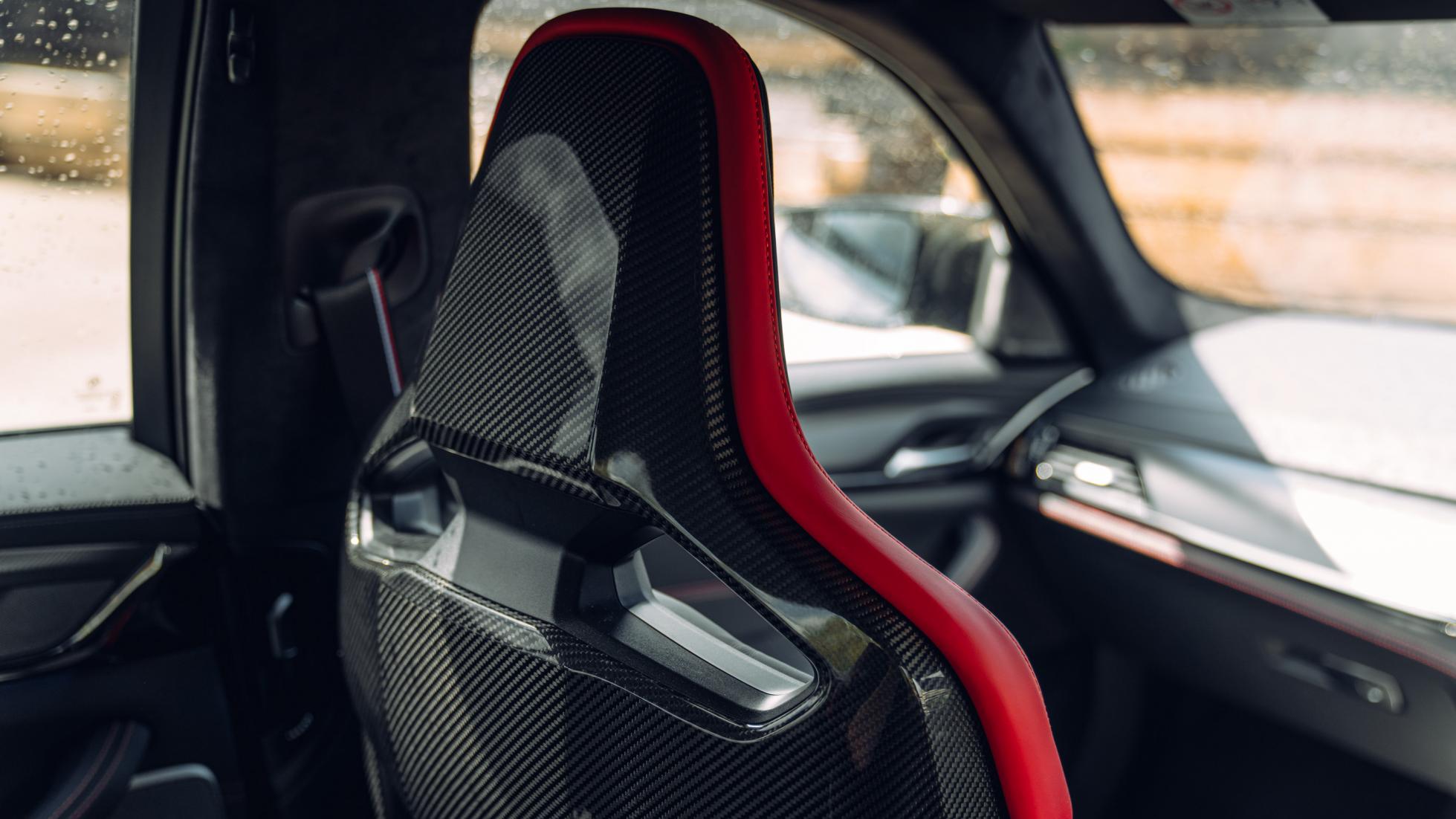 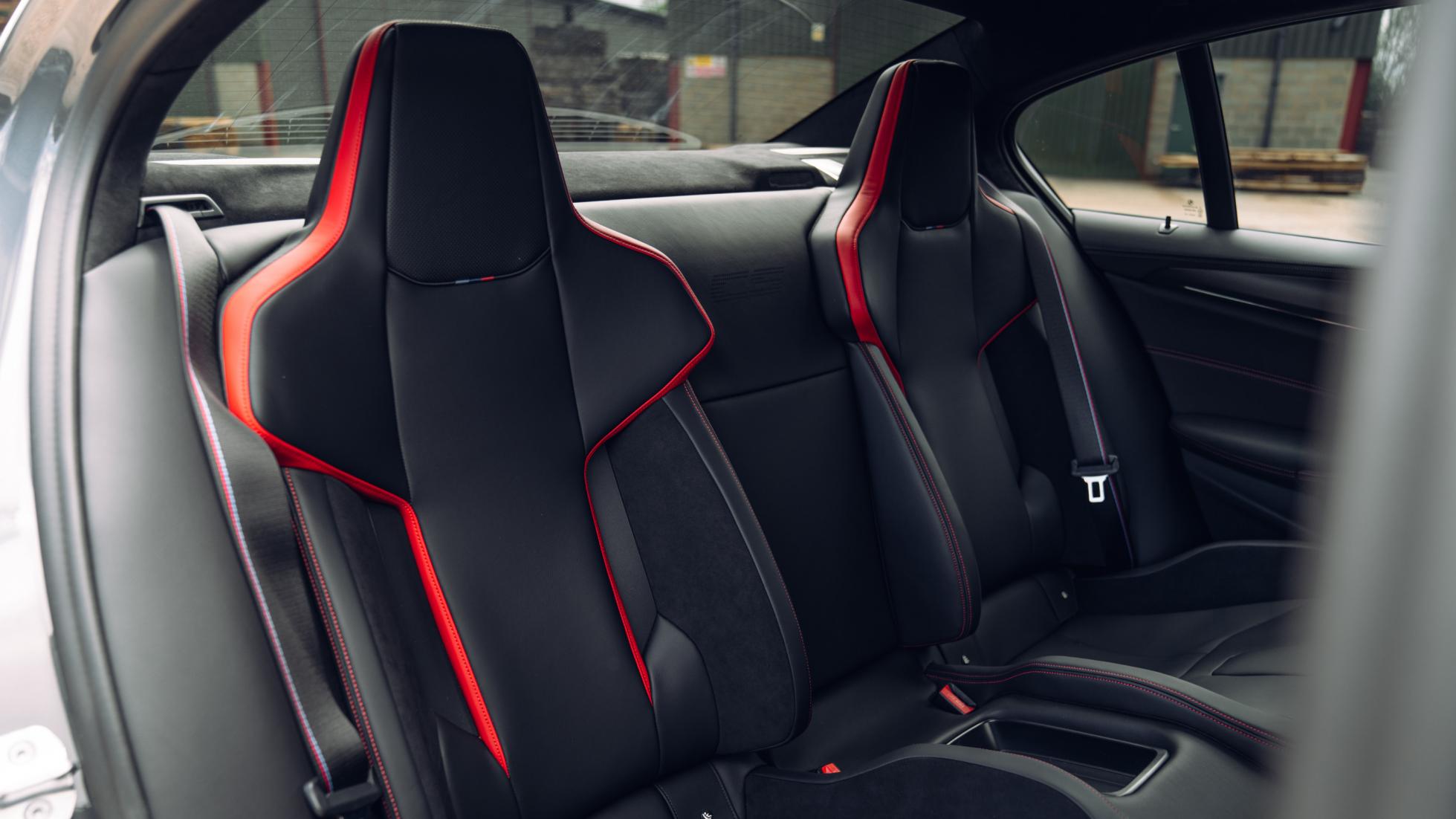 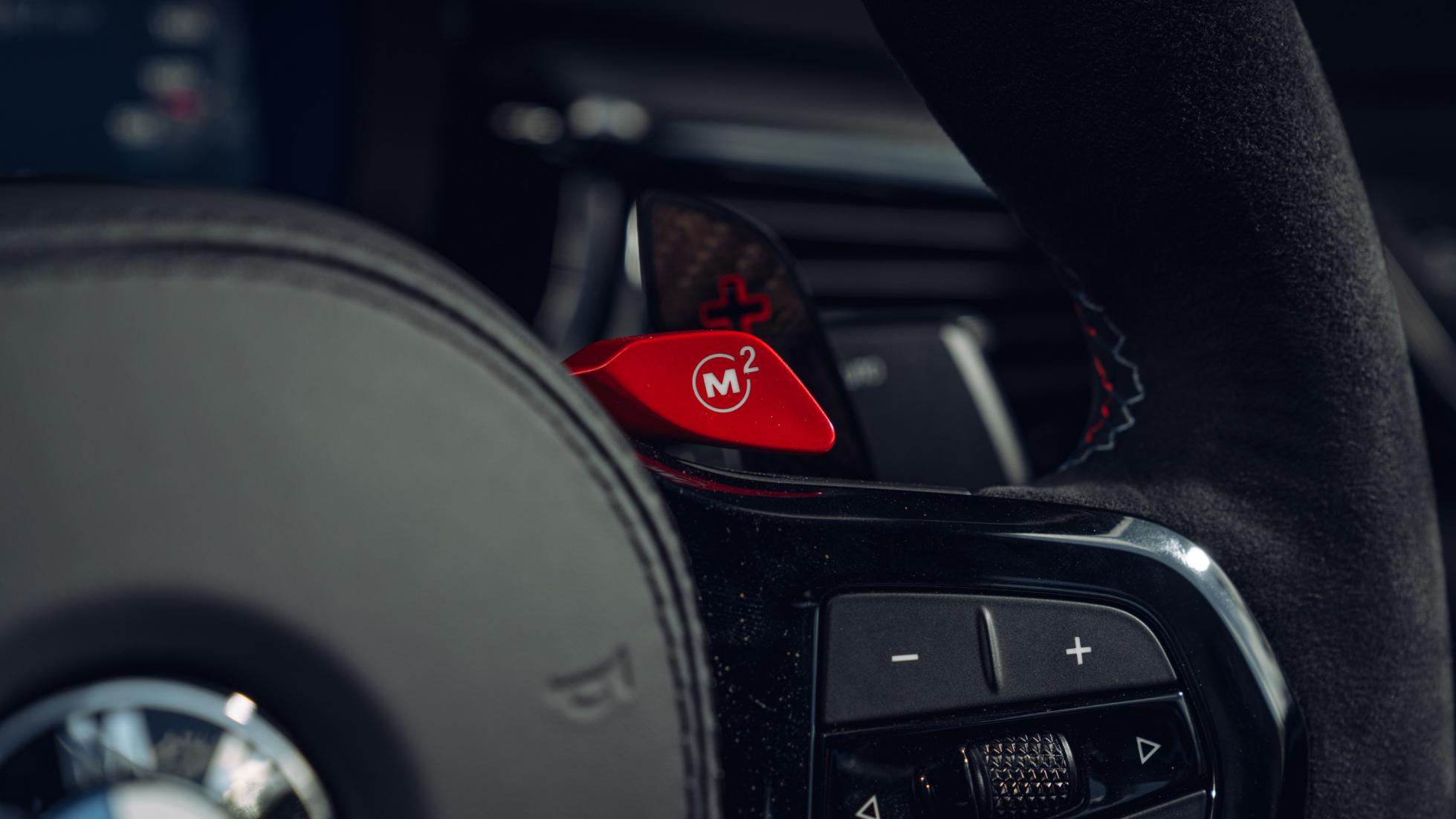 But that’s not why the kids will love being in the back, is it?

No, the front seat design has been copied, so you have a pair of proper buckets back there as well.

The last car that catered for rear seat passengers as well was the Ford Mach-E 1400. Got a third child? Tough.

Any other borrowed M3 bits in the CS?

The carbon paddles, irritating new all-digital dash display and the buttons on the centre console.

These used to control the dynamic settings, but no longer. Now you have to press one to get into the menus to do that.

But of course you have the M1 and M2 buttons as shortcuts. The centre console buttons are more concerned with adjusting the dash display.

One more irritation up front. BMW has sealed up the centre storage cubby. That’s useful space and last time I checked, space doesn’t weigh much.

The only weight involved must have been the hinges. But it’s gone to save a hundred grams and yet we still have illuminated M logos on the seats.

The bulk of the weight reduction comes from fitting carbon ceramic brakes – that’s a 23kg drop.

There’s also a reshaped carbon bonnet and it’s safe to assume the new forged wheels and standard-fit Pirelli P Zero Corsa tyres (275-width front and only 10mm wider at the rear) save weight too.

But the suspension must be stiffer?

It is bespoke (although still uses a double wishbone front and multilink rear set up), the ride height has been dropped 7mm and the dampers are from the M8 Gran Coupe.

But it’s the control that’s changed rather than stiffness. OK, at low speeds it is detectably firmer, positive around town, but the movements are so small and so professional that you actually find yourself admiring the ride rather than being jarred by it. Passengers may not agree.

Motorways are dispatched effortlessly. The engine is no louder or more raucous here than in any other M5 and the reduction of body movement while retaining comfort at higher speeds is lovely.

But it’s when you ramp up the modes that this thing impresses so much. In the standard M5 – and the Competition – the suspension would eventually start to bob over bumps, control would be more vague and you’d lose confidence. That’s gone.

BMW has retuned the bearing springs and refined the damper control, and it’s now immaculate. It’s the precision that’s the biggest gain.

It makes the CS feel a smaller, more wieldy car, it does your bidding with no slack, but no real discomfort either.

The steering and brakes have gained focus and the speed it carries so easily through corners is plain shocking. It’s still got a Drift mode hasn’t it?

Yes, although you’d never use it on the road as it still requires all safety nets to be disabled. The fun mode is 4WD Sport which sends more power to the back axle for neutral corner exits.

It’s just such an easy car to drive swiftly and rewardingly. You don’t need to be on top of the engine all the time, just surf the instant access torque around 4,000rpm and you’ll howl out of corners.

Use the whole lot and you’ve got supercar pace on your hands. And a chassis with the ability to deploy it. It really is something special in this area. Dynamically it pushes into the area occupied by the Jaguar Project 8 and Alfa Romeo Giulia GTAm, but does so in a subtler, more usable way.

Overall it’s smooth, indulgent and involving. Yet also nimble, vivid and accurate. Clearly the best M5 of this gen – and so it should be. But here’s the thing with this CS.

The changes made have had a fairly profound effect – it’s notably more precise, feels smaller on the road, all that good stuff. Which also means it behaves quite a lot more like an M3…

OK, it’s quicker (a bit) and 4WD, but the accuracy, the phenomenal traction and confidence are quite similar. You start to think that the M3 might give you what you need for not much more than half the price. And from this summer that’ll be available with 4WD too.

Not unless you pay to have them repainted. And even then you don’t get the retro-French yellow LED strip lights (only when you have the headlights on though – for daylight running legislation insists they glow white).

This is probably the swansong for the F90 generation M5, which means it’s very likely to be the final non-hybrid M5. BMW going out with a bang. A collector’s item? Not immediately.

History tells us that M5 prices tend to drop a long way before picking back up. But one day we will look back on the M5 CS and remember it as being perhaps the most complete and composed super sedan of them all. Top Gear’s Top 9: the best looking BMWs ever made

Non-plussed by the new M3, iX and X7? Remind yourself of these BMW beauties