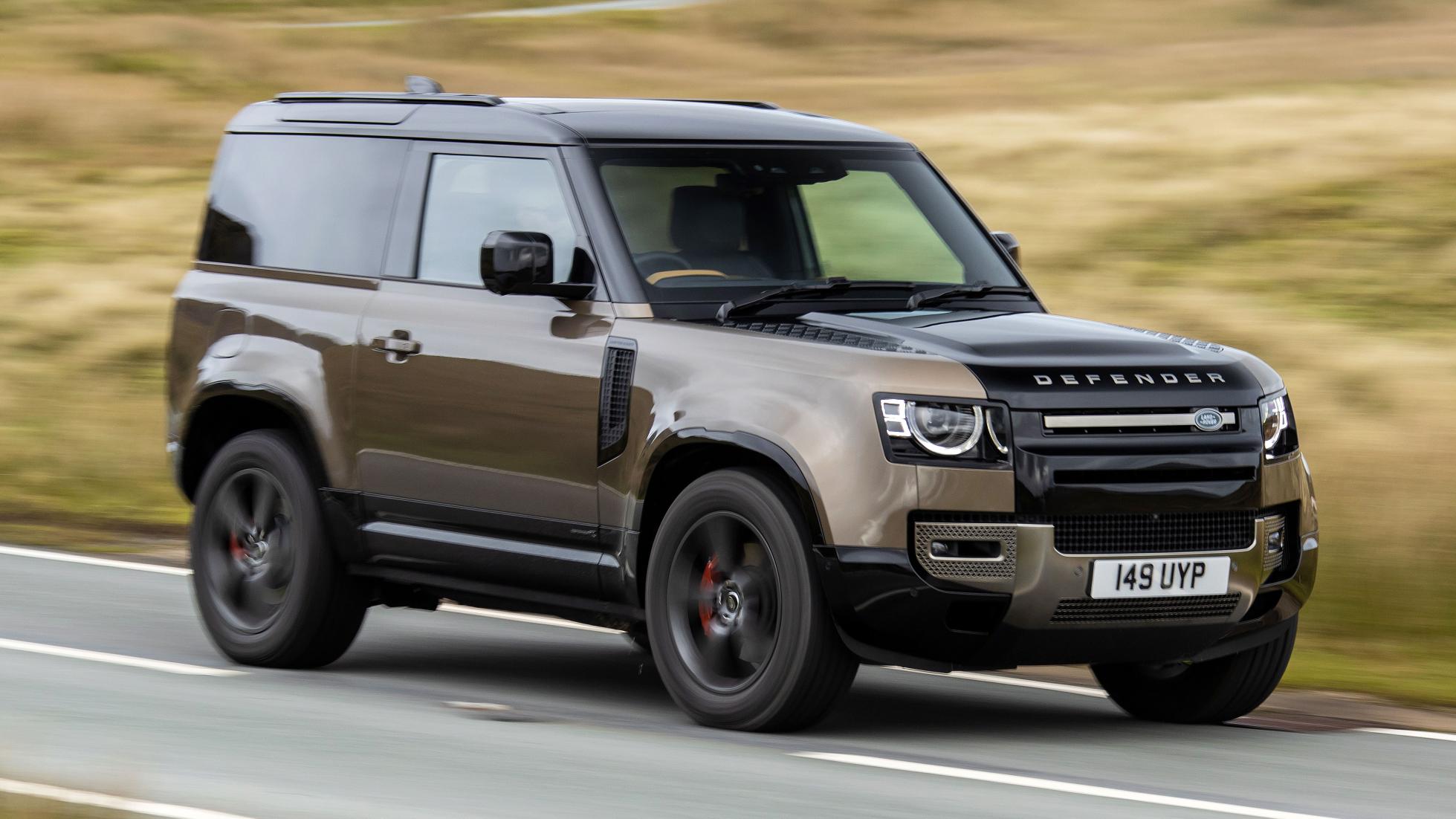 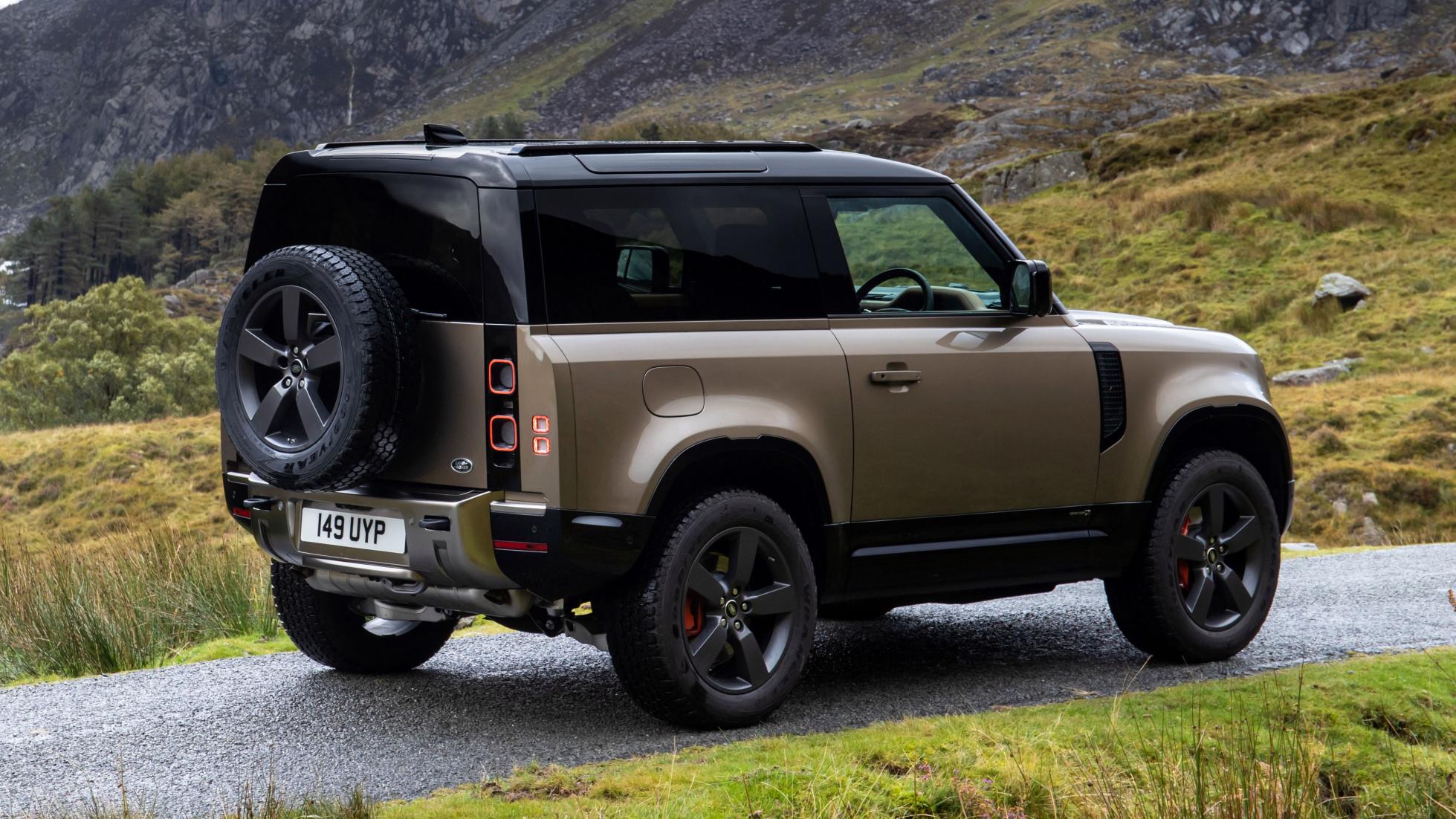 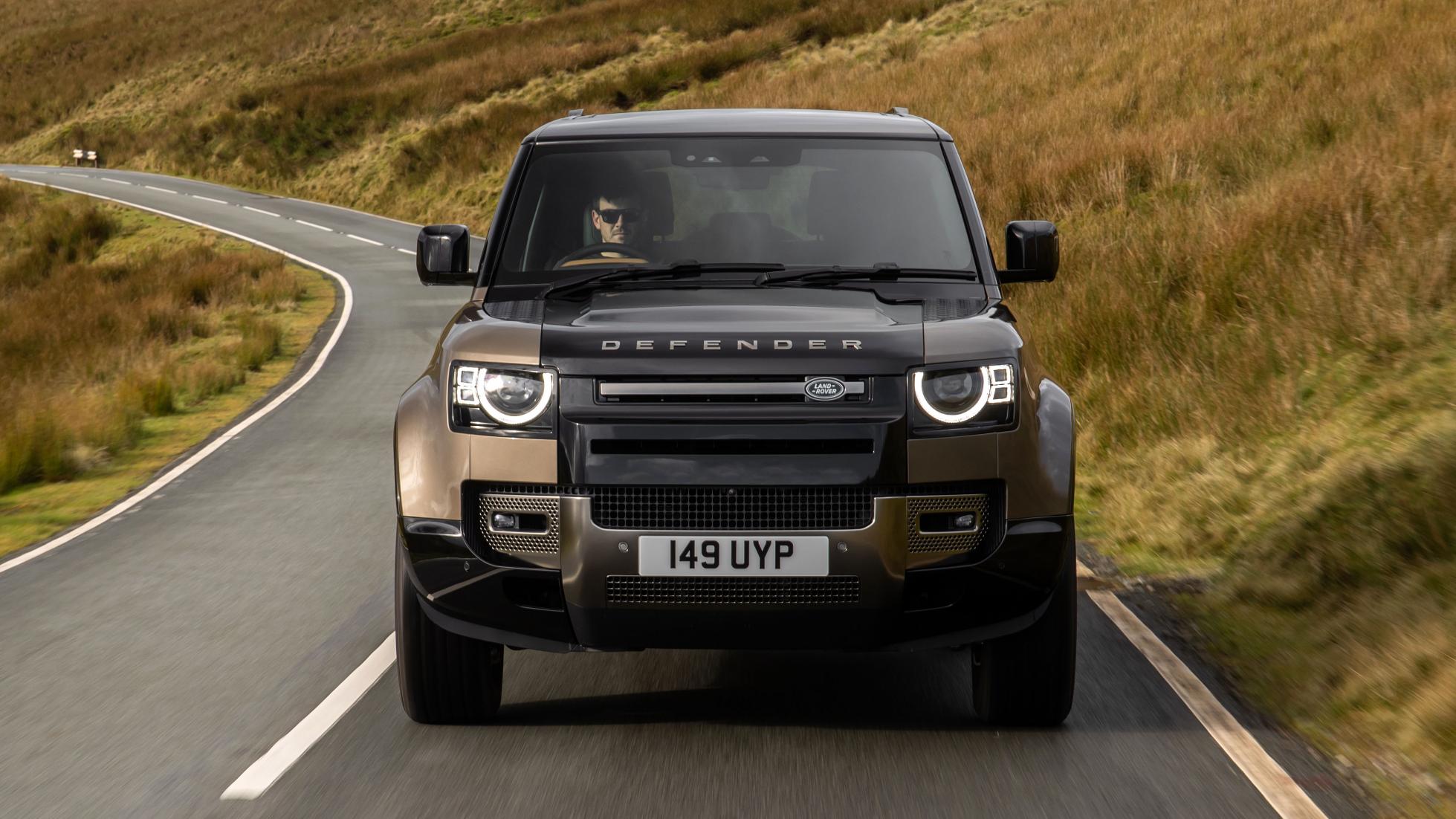 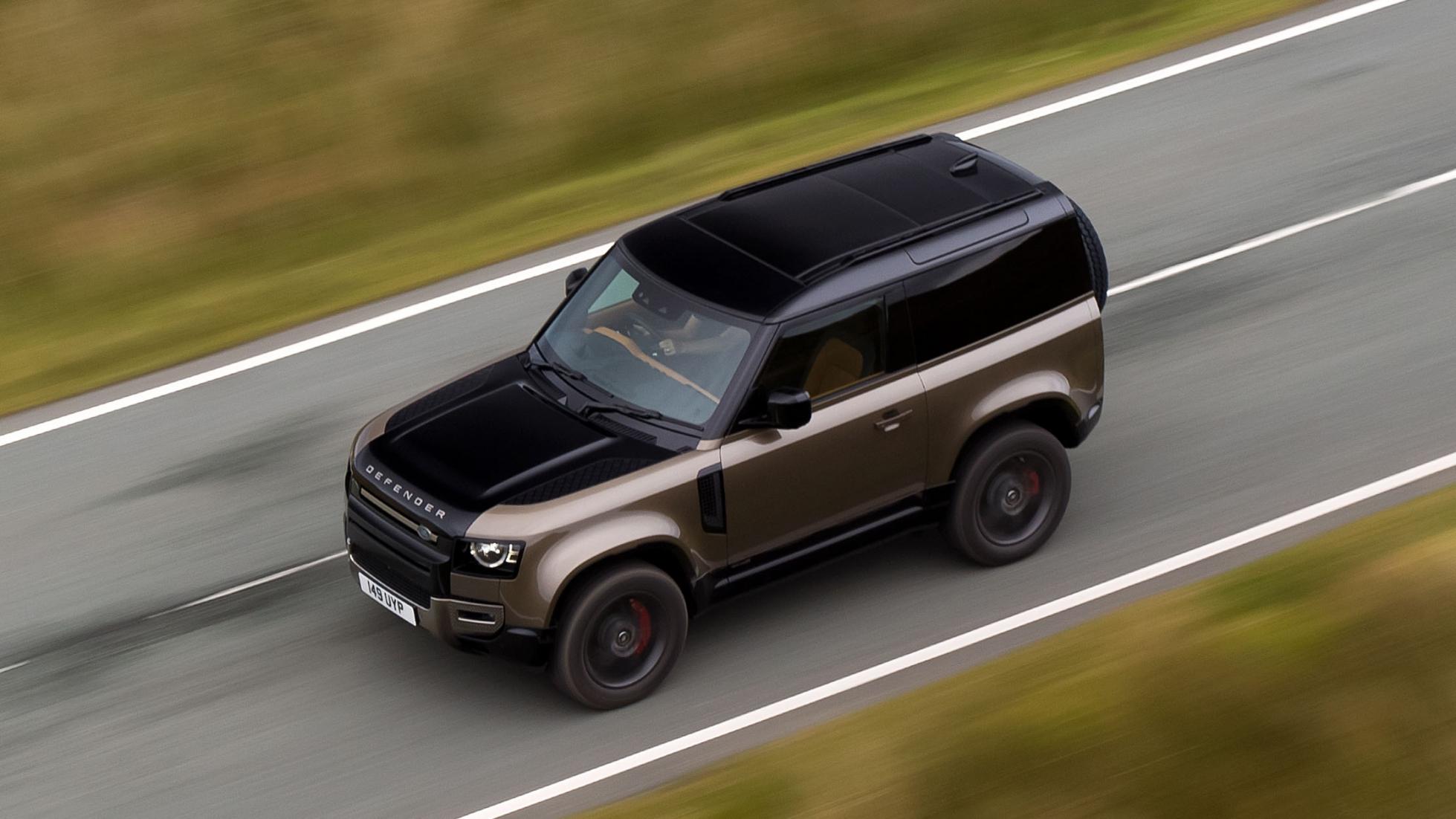 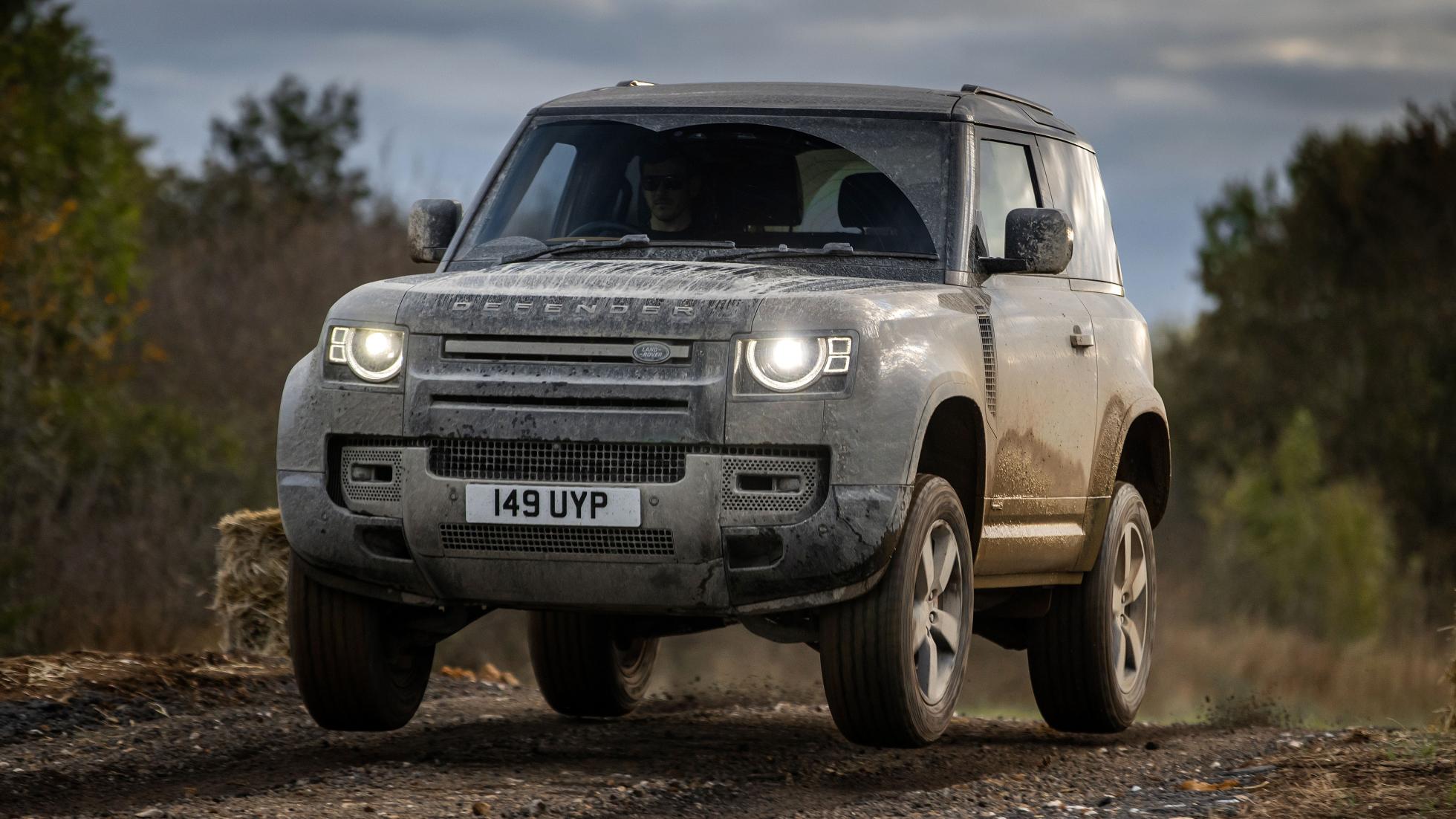 And it is. It’s the version of the new Defender that’s fastest on the road, and most capable off it.

It’s the short-wheelbase 90 body motored along by the new straight-six 3.0-litre petrol engine, with 400bhp. It has mild hybridisation too, but this is not a vehicle to which the term ‘mild’ naturally cleaves.

Being short in the wheelbase, the 90 is even more insanely handy in the rough than the 110 – it can wriggle its way out of tighter spots, and is less likely to ground its belly.

But it’s not the only new version we’re testing here.

We also tried the base-model P300 on steel coil springs.

Wow, entitled motoring hack gets bumped into the base version. You don’t often see that.

Enough of your snark. Think how often this website tests the expensive options and tells you they aren’t worth it. You could almost call it public service.

Anyway… The coils are available only on the 90, as all 110s have air-springs. Air springs also bring adaptive damping, so you miss out on that. This base model also has a simpler terrain response system (no configurable mode). It also goes without an active rear diff and the off-road speed system they call all-terrain progress control. You can add all those things back as option packs though.

It still has a low box and diff locks mind. And 3D cameras and wade-depth sensing. And the Pivi Pro navigation. And the 300hp four-cylinder petrol, which is cheaper than the diesels.

But it would take titanium-willed self-control to run through the configurator and not tick one or multiple options boxes. 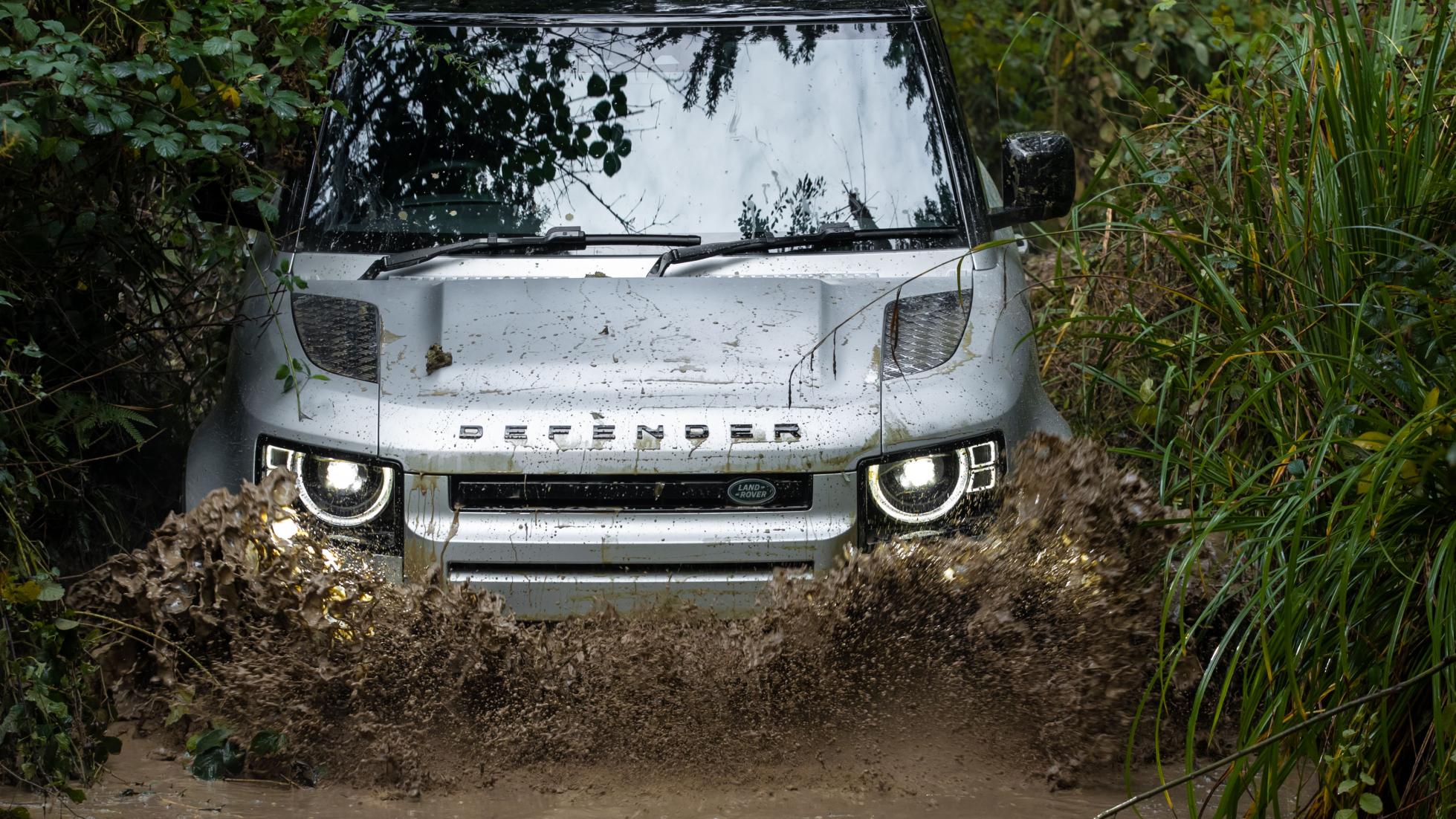 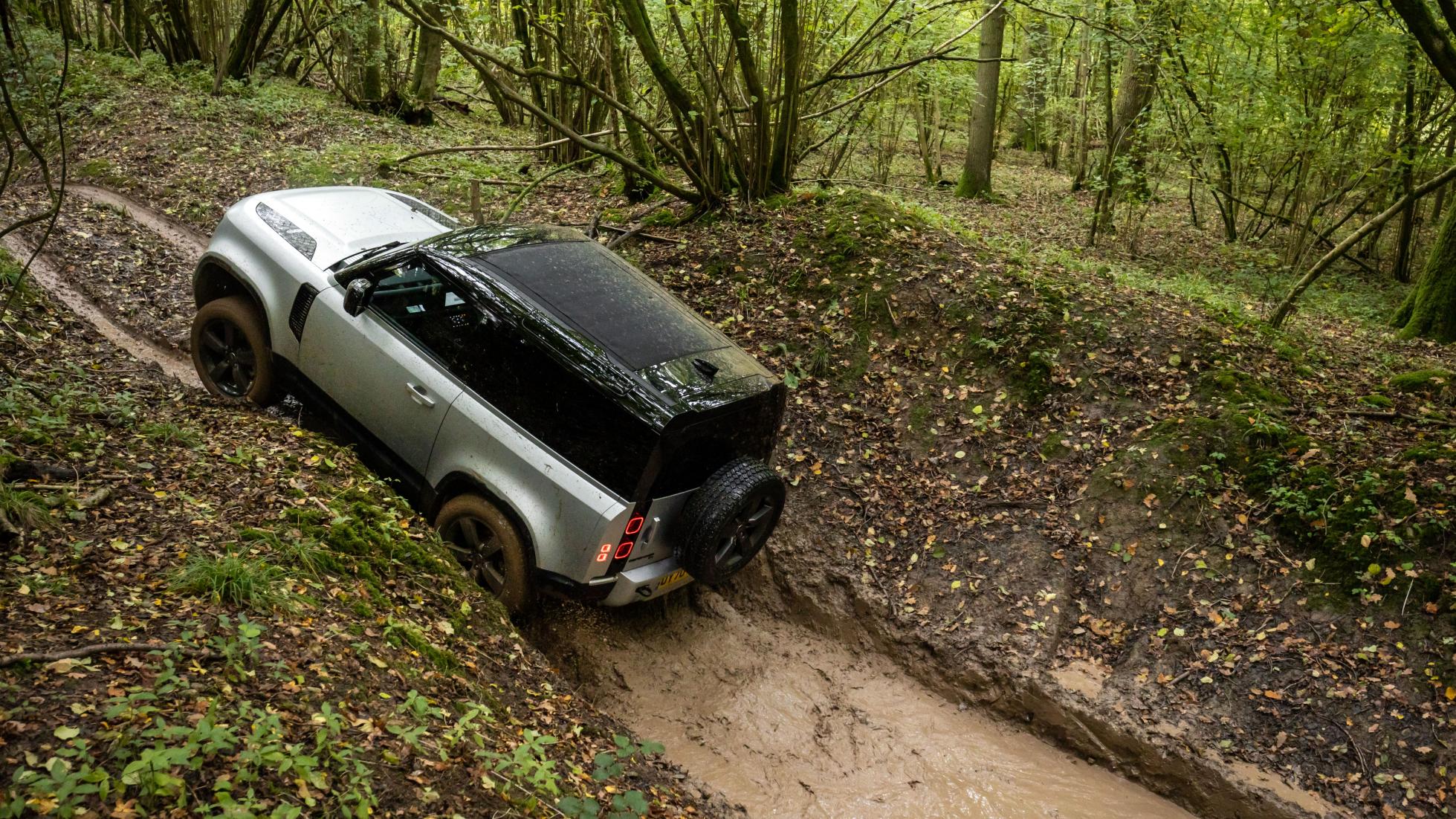 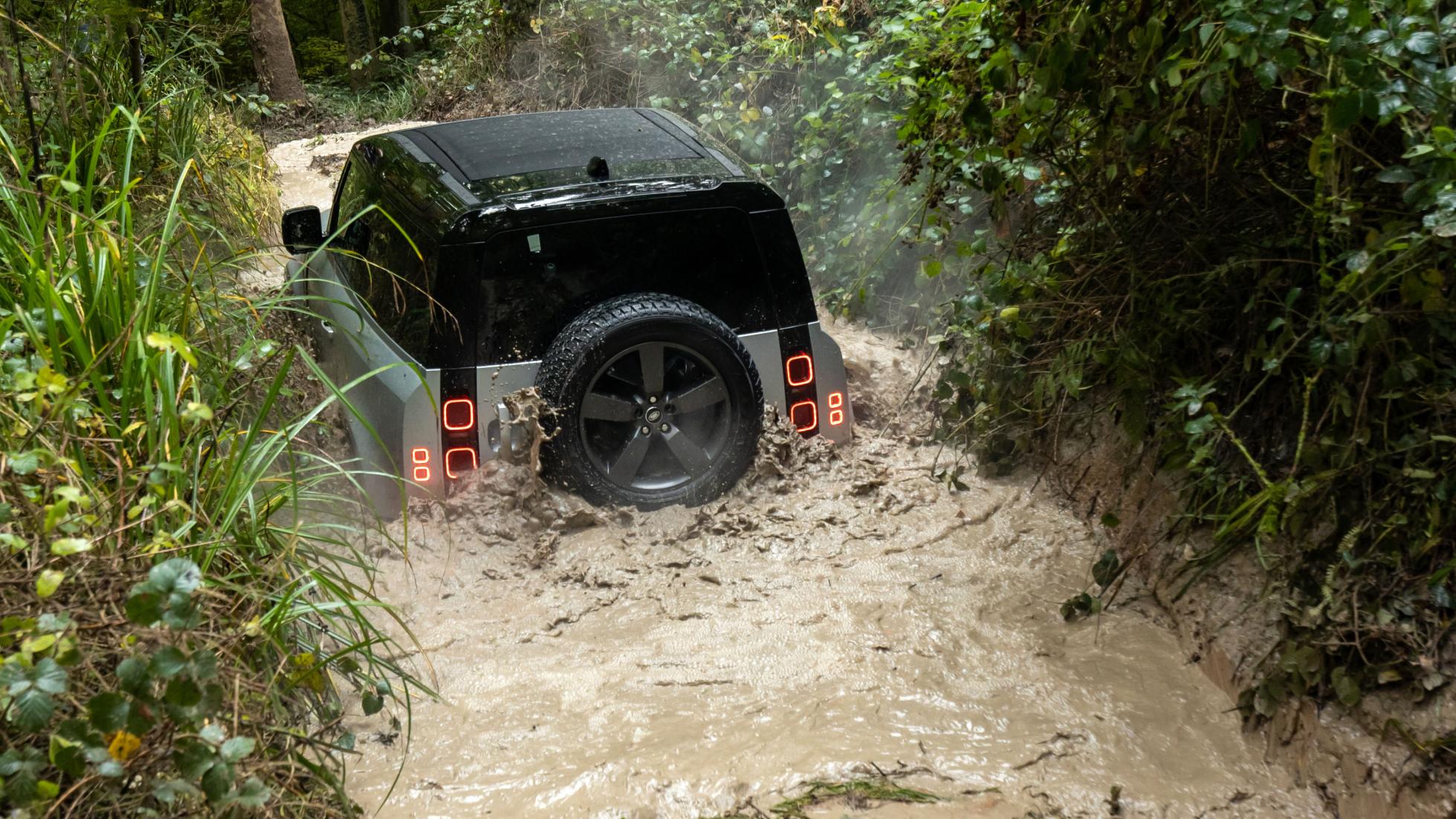 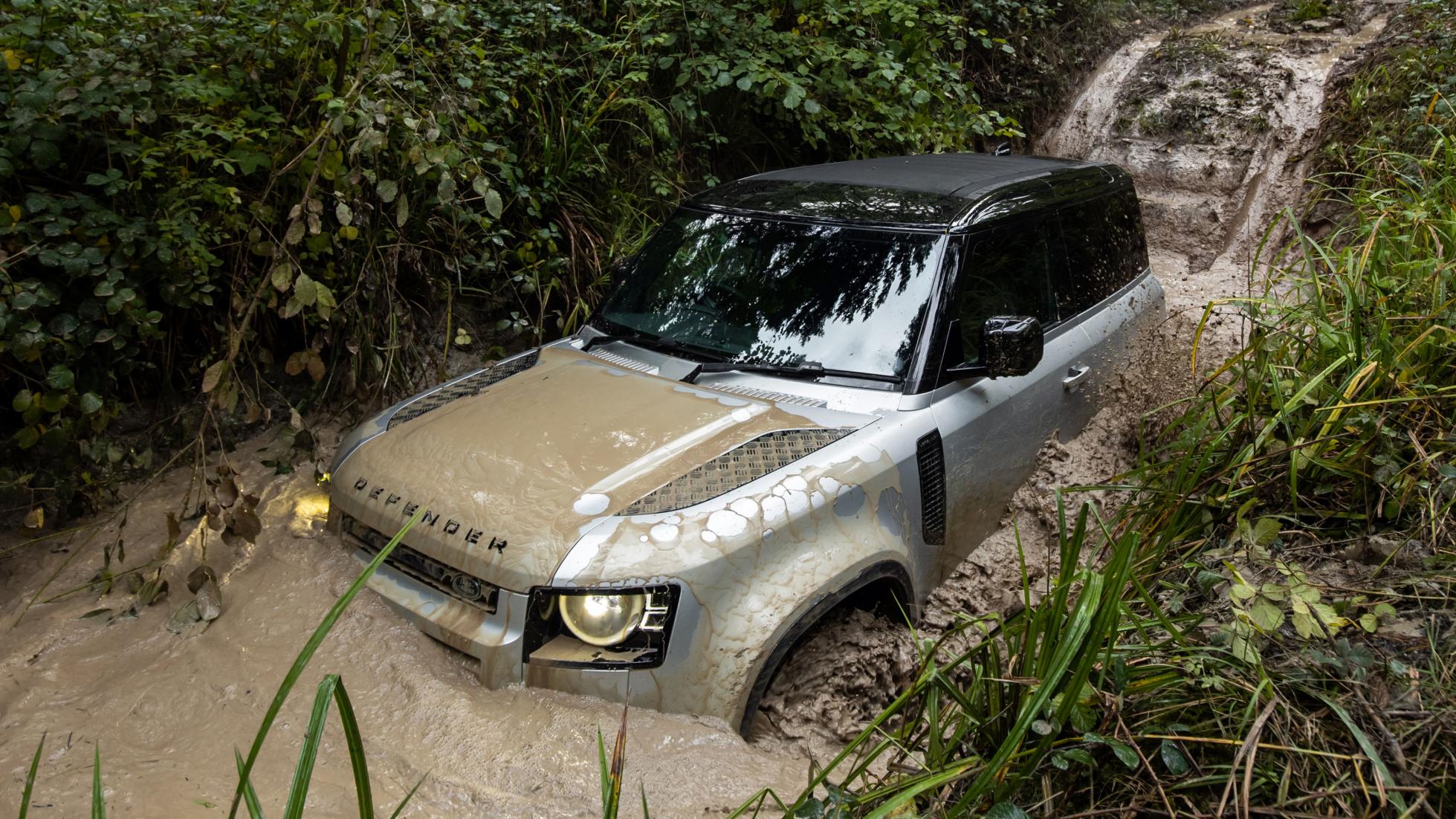 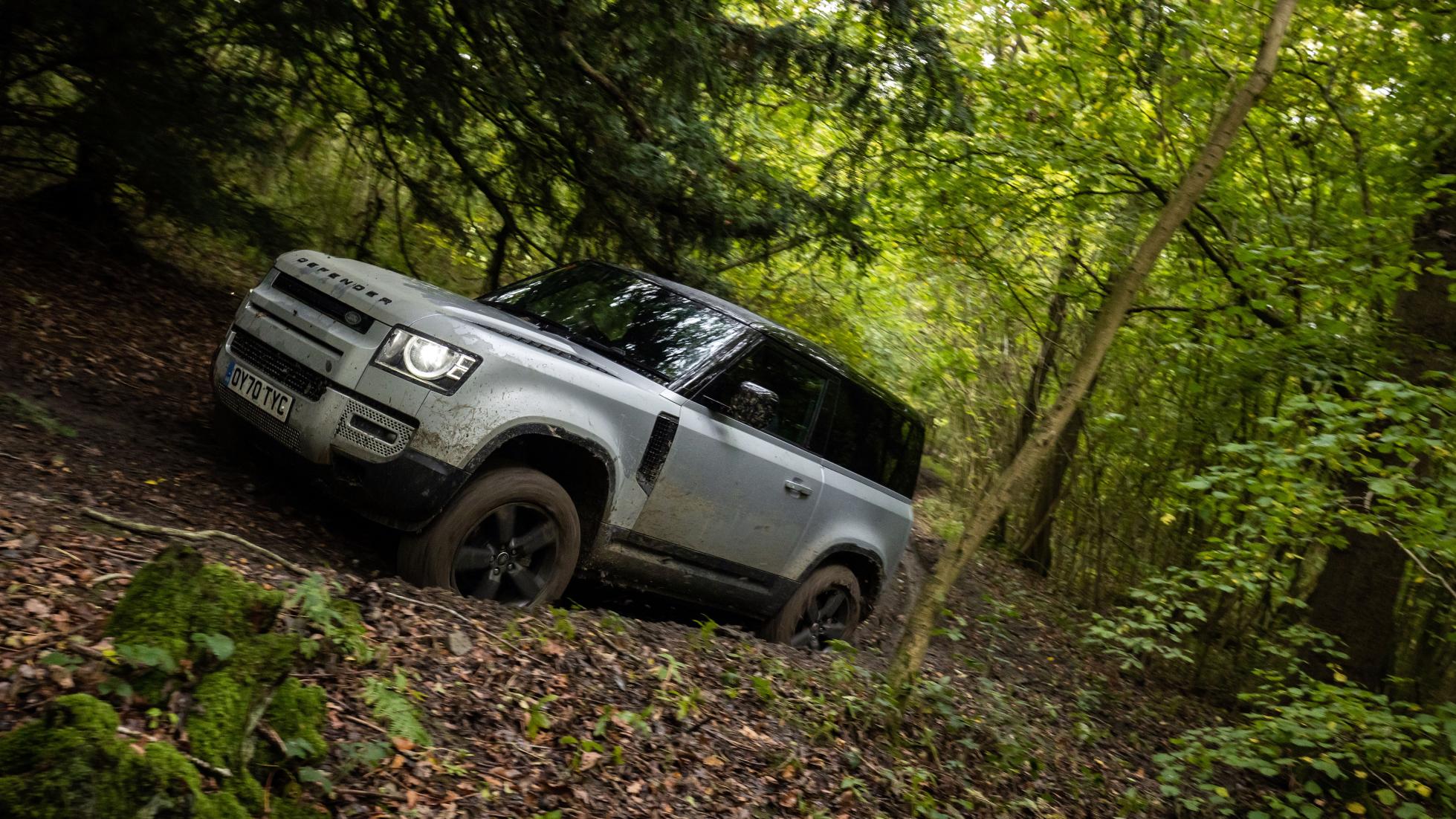 OK, start with that six-cylinder engine.

It’s a fancy thing. Two chargers pump air to the cylinders. One’s a normal turbo, the other an electrically-driven compressor, as a means to get rid of lag at low revs. Audi has a similar thing in the SQ7 diesel, and Mercedes-AMG in the 53 petrols. It’s powered by 48-volt electrics, and so the mild-hybrid starter-generator can also take advantage of 48v. Plus, the cylinder head has continuously variable valve lift.

It’s a straight-six, nothing to do with the supercharged V6 Jaguar and Land Rover have been using in recent years. But it uses lots of parts in common with the other Ingenium three and four-cylinder jobs. It was intro’ed on the Range Rover Sport and Velar last year.

How does it feel?

It’s got broad shoulders, shoving the heavy off-roader forward meaningfully from about 2,000rpm to 5,000-plus. It’ll even go to 6,500 but you wouldn’t, as it’s not exactly dripping with high-rev aural charisma. Whereas it is pretty smooth in the mid-ranges. While we’re on the subject of the sound, at very low revs it’s strangely dieselly, albeit quiet.

The 8spd transmission shifts smoothly and anticipates your needs well, so you’re seldom stuck at low revs wanting instant torque – it’ll just shift down. But for experiment’s sake hold it in a high gear with the paddles and you find the electric compressor does suppress the lag even if it doesn’t entirely get rid.

Zero to 100km/h is 6.0 seconds, which is pretty perky but never outright fast. It overtakes smartly enough. If you floor it even at speeds higher than 95, the nose perceptibly lifts as it gathers more speed.

So is it fast enough to overwhelm the chassis?

Not a bit of it. This is a vehicle that manages itself with dignity provided you work it smoothly. There’s roll, and the tall tyres squirm a bit, but it’s honestly in another world from the new Jeep Wrangler. And the ride is properly supple and controlled.

Once up to motorway-speed-and-a-bit the Defender hums quietly. Engine and wind and tyre noise all fall to the background, and it tracks straightahead gamely. If you’ve got a primary-school-age kid, speccing the centre jump-seat option will make you the best parent in the world.

The rear bench gives plenty of leg and headroom for adults, and the upper ‘alpine’ windows make it feel airy. But getting there is a palaver – you have to squeeze into a tight gap or have your patience tested as the front seats motor sluggishly forward.

The boot’s just under 400 litres, which is hardly enough for six active campers. If you have a lifestyle you’ll want to plunder Land Rover’s huge range of external carrying accessories – roof racks, ladders, panniers, clamps and the rest.

Well if you’re truly going to get muddy you’ll want a more basic spec. What’s that like?

The P300 petrol is pretty much like anyone else’s four-cylinder turbo: not exactly inspiring, but torquey and useful. The coil springs ride decently when the Defender is empty, and have helper springs within them for when you’re loaded up or towing. Given the diminished performance versus the P400, you can probably manage without adaptive damping.

And off the road?

Oh my oh my. Even without the air-suspension to levitate the body in extreme circs, it’s amazing. Remember, ground clearance between the wheels is determined by the wishbones, and raising the air springs wouldn’t help that. Of course you don’t get the advantage of using air to increase your breakover, but in the SWB that angle is so insanely good anyway it’s seldom a worry.

The petrol engine and autobox dispense torque gingerly when you need to ease across slippery mud, but with vim when you’re pointing up a precipitous slope. Traction is awesome. Clearance and articulation pretty colossal. Wading depth almost scary. Downhill control near-supernatural.

It just paws along like a hippo. So don’t stand in its way.